Blancpain introduces the new Fifty Fathoms Bathyscaphe Flyback Chronograph Blancpain Ocean Commitment II (BOC II). This might be one of the longest names for a watch we’ve come across so far. The Fifty Fathoms Bathyscaphe was presented a couple of years ago, as the new re-interpretation of the late 1950s divers watch by Blancpain. This particular watch, the Blancpain Ocean Commitment II edition, is limited to only 250 pieces. For every sold piece, Blancpain donates 1000 Euro in support of scientific expeditions. We know you can do your math, but in the end there will be 250,000 Euro wired for a good cause. Quite an impressive amount.

Let’s have a look at the watch.

Blancpain decided their Fifty Fathoms Bathyscaphe BOC II needs to be in blue, the color of the Ocean. Blancpain says it took them several years to master a blue ceramic case for their watches.

The dial of the Fifty Fathoms BathyScaphe BOC II is in meteor grey, with a beautiful ‘sonnenschliff’ (Sunray) pattern. The two sub dials for the chronograph (at 9 and 3 o’clock) have a circular grain, whereas the running seconds (at 6 o’clock) just use the sunray dial as background. The date is positioned at 4.30, where it does no harm. The meteor grey color of the dial goes nicely with the blue ceramic case, crown and pushers. 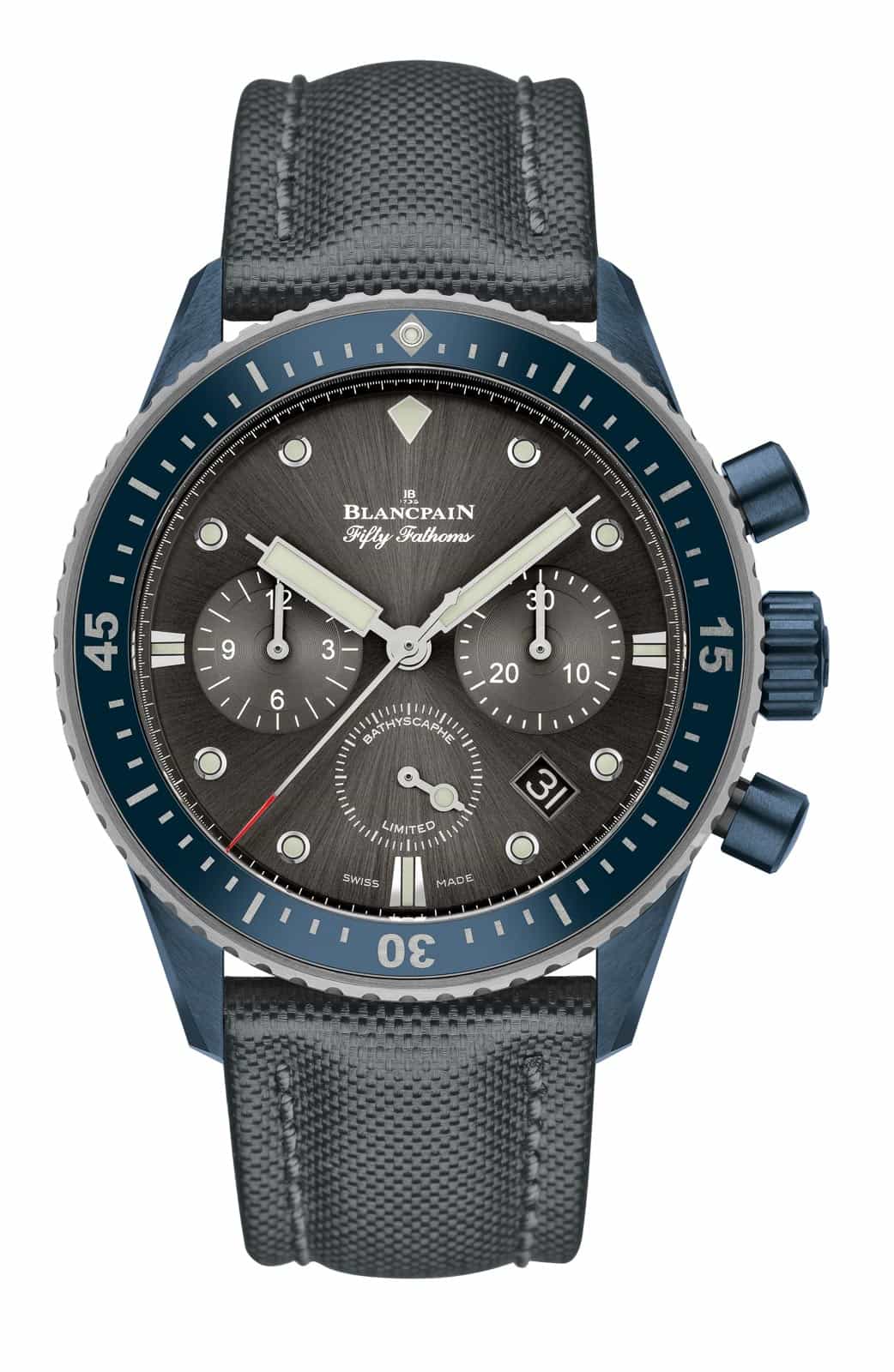 A complex process of adding pigments during the production process of the ceramic case resulted in this beautiful blue color. The ceramic, that starts out as a powder, is pressed into a mold. This is done to obtain the shape. Blancpain used this technique, for the case-middle, case-back, bezel and chapter-ring insert.

Another technique is used for the crown and pushers. It consists of injecting ceramic in the form of granules into a mold. Afterwards, the ceramic parts are placed into an oven using different temperatures for eliminating bonding agents and (high temperatures) to give the ceramic parts its hardness.

Inside the Blancpain Fifty Fathoms Bathyscaphe BOC II ticks a high-beat movement, at 36,000 vph. This chronograph flyback movement, caliber F385, is developed in-house and uses a column-wheel mechanism. The ticking number of 36,000 (or 5 hz) is similar to that of a Zenith El Primero or (Grand) Seiko Hi-Beat movement. You will be able to measure 1/10th of a second due to this high-beat movement. Just like its Swatch Group brother Omega, the Blancpain movements use a silicon balance-spring these days. Another technique-in-common is the use of LiquidMetal for the bezel. 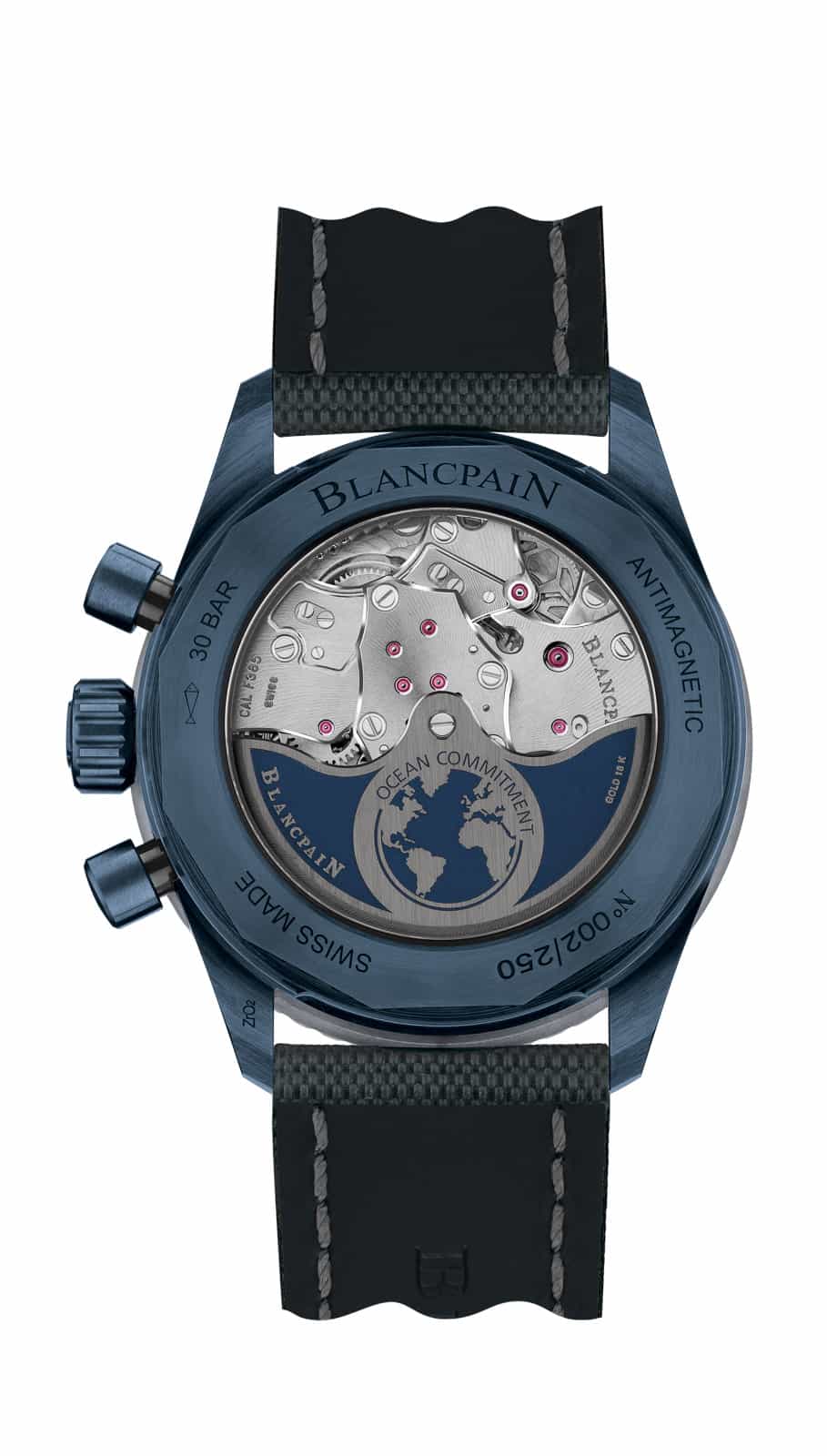 As you can see a beautifully finished movement, consisting of 322 components. It has a power reserve of 50 hours. The 18 carat gold rotor has this blue color and image of the globe, all oceans in blue.

This blue ceramic (43.6mm) chronograph with flyback function is an interesting edition of the Fifty Fathoms Bathyscaphe. Not only does Blancpain show that they care about the environment, they also show how to apply some innovative techniques to their watches. The blue ceramic makes sense when doing a watch that is being linked to the preservation of the oceans. The buyer of this watch will get a certificate that the donation has been made and receives an invitation to become a member of the Ocean Commitment Circle. 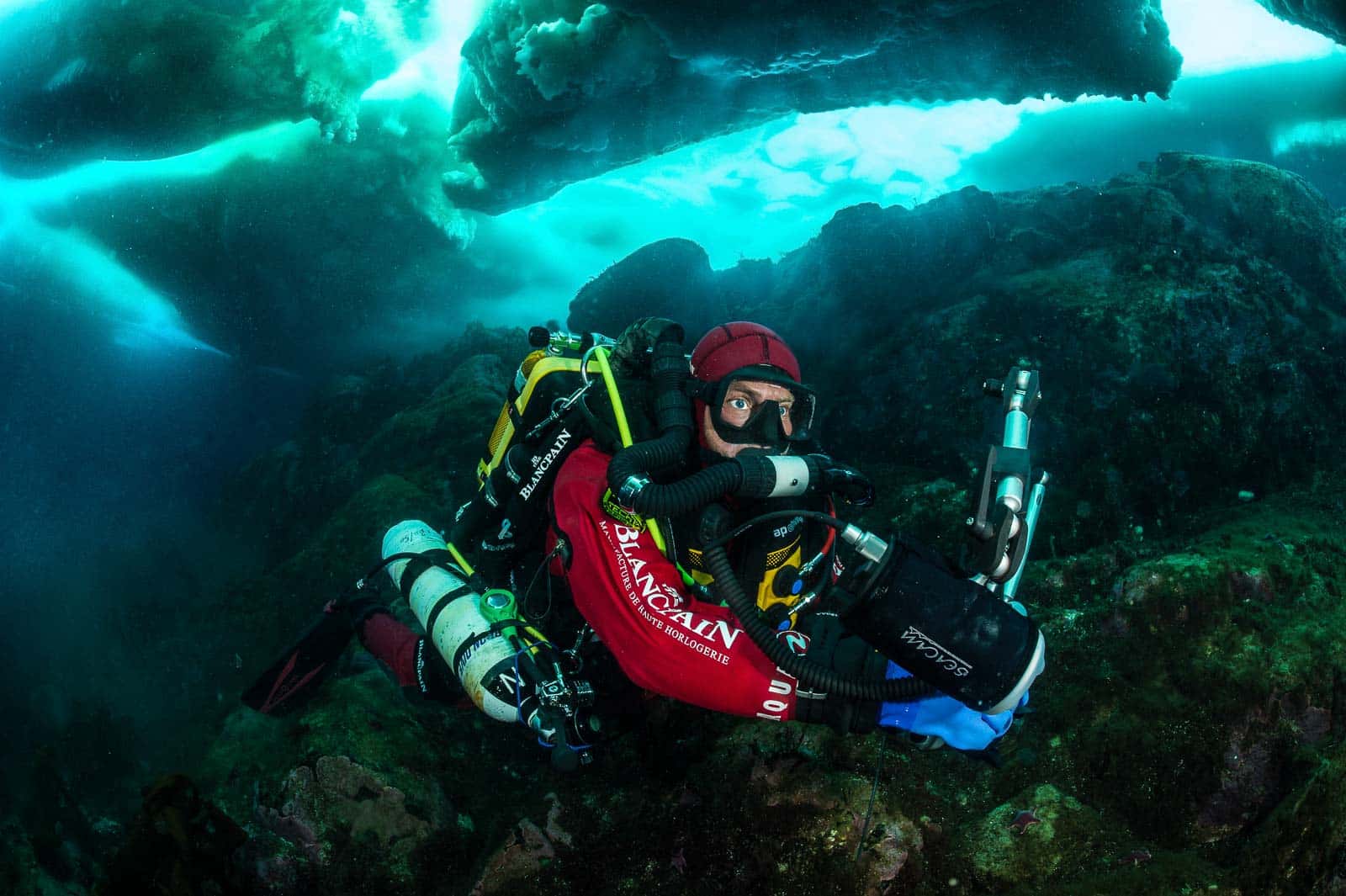 The thing that always interests me with watches that commemorate a certain good cause, is whether it is the reason for purchase. I believe that people will buy the Blancpain Fifty Fathoms Bathyscaphe BOC II because they like it, with the blue ceramic case. That it supports a good cause is definitely a plus, but I wonder if it will persuade people to buy the watch. I have no doubt it will be sold out shortly though, as it simply looks amazing.

The watch comes with a book entitled “Hans Hass, Awakening to a New World”, numbered so that it corresponds with the number of your watch. This book is produced in collaboration with the Hans Hass Institute and highlights a manuscript that he wrote in the 1960s and which to date has never before been published in full.