Trawling through watch blogs searching for useful, trustable information can be a slog. It can seem like an endless stream of positivity as many up-and-coming (and, regrettably, some established) blogs vie for sponsors’ budgets. I was discussing with one of my colleagues just the other day how we try and avoid overwhelming bias on Fratello while remaining true to ourselves for the good of our readership. Quite bizarrely, the new Breguet Classique Double Tourbillon 5345 Quai De L’Horloge popped-up at just the right time for me to use it as a perfect example in answering this question…

Firstly, it is true that we allow certain brands to advertise on our website. It is not something we hide as it is an essential part of any blog/online magazine’s survival. The difficulty, however, is ensuring the content we write for brands with whom we have an official working relationship remains genuine. Central to everything we do on the site is that our opinions can not be bought.

Sharing the things that make us happy

For these relationships to work then, we always insist on being able to select the watches upon which we focus. Simply put, we tend to pick the ones we like. We pick things that excite us because we think they will excite our readership. Over time, this does skew to a positive bias, but I think sharing the things that make us happy is a better way to live. Every so often, however, we come across a release that is worthwhile communicating but does not necessarily tickle our personal fancies. What I like to do in these instances is exactly what the Breguet Classique Double Tourbillon 5345 Quai De L’Horloge enables me to do — to talk about exactly what does make this watch awesome and which other watches from the same brand offer the same tech in a package I (personally) find more desirable. 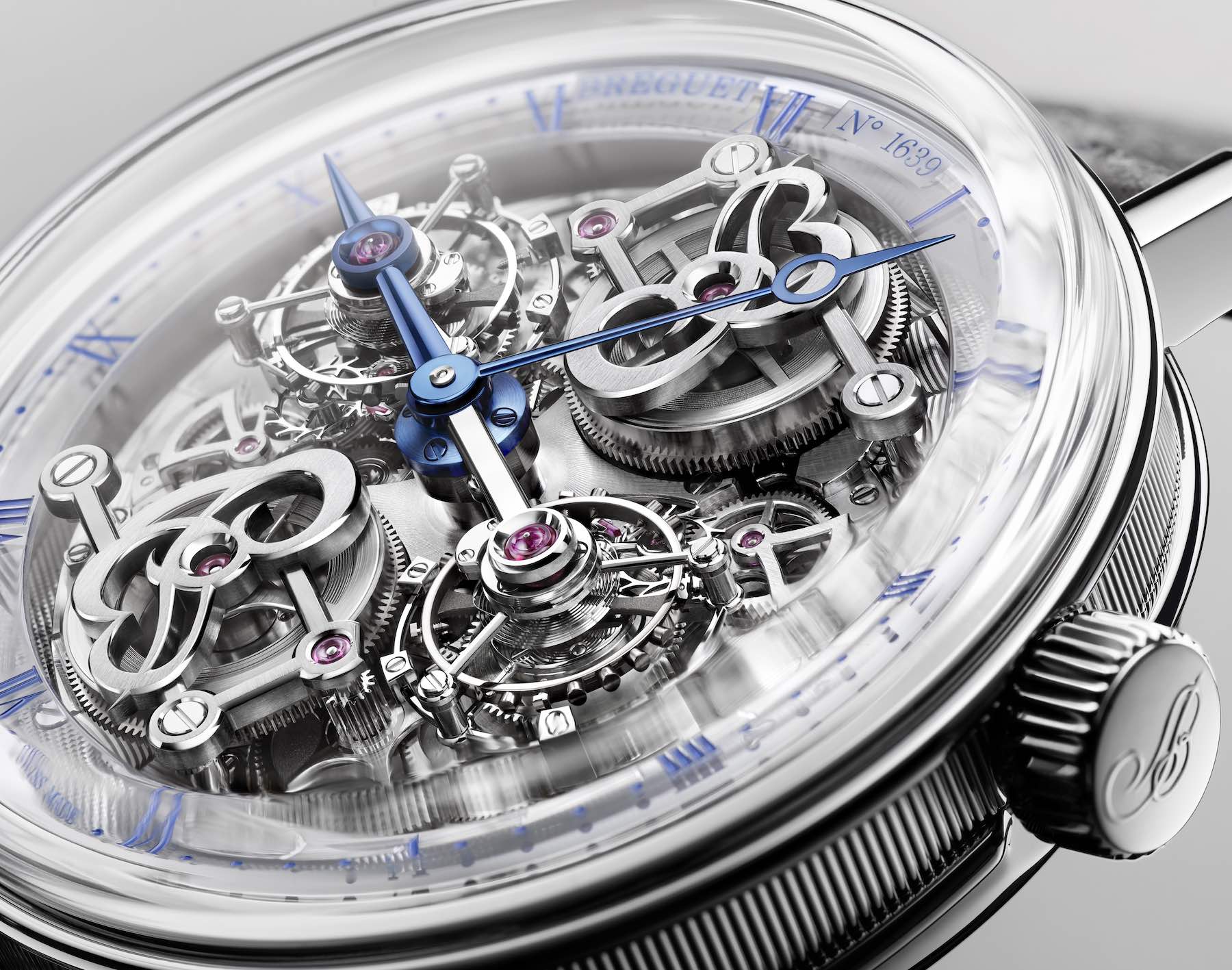 I attended the online unveiling of this piece yesterday. I was chatting with RJ via WhatsApp during and after the presentation, sharing my immediate takeaways and some screenshots. My initial reaction to the watch? I believe I described it as, “really something.” His response? A simple, “wow.” It was clear, however, that while we agreed on the watch being stunning (it is in the literal sense of the word), our personal feelings towards it diverged immediately thereafter.

RJ was all-in on the Breguet Classique Double Tourbillon 5345 Quai De L’Horloge. He loved the wildly skeletonized, in-your-face display. He is a “baller”, after all… I, however, was impressed by the technical execution and the finishing but felt like there was too much going on in what amounted to a very glitzy affair.

But amid the madness of twin orbital tourbillons, lovingly engraved case back vista, brand-centric bridges, the floating sapphire dial, and the boxiest box-sapphire I’ve seen this year, a memory was stoked. It was a memory I’d unintentionally buried deep in my subconscious — a calling from a time gone by. In a flash, I was dragged back to the beginning of my apprenticeship. I remember sitting at my bench with the then-current Breguet catalog in hand. I was fawning over a piece that hasn’t often entered my mind in the 10+ years since that moment took place. But all at once, it was back in my mind. Along with that recollection, so too did a cascade of genuine emotions return. 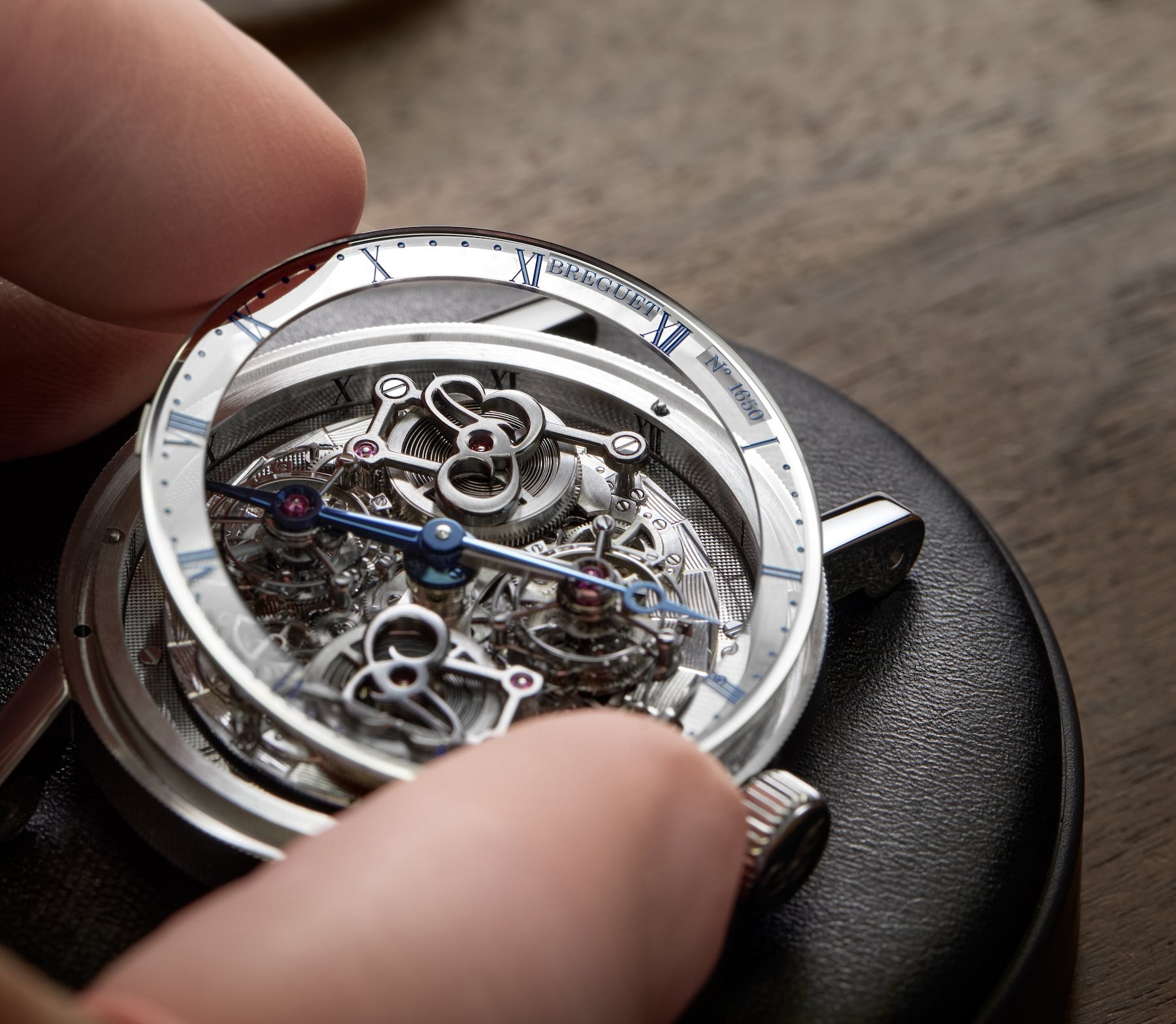 It is really weird how our tastes change. It happens without us realizing most of the time. One day, you can be convinced that rose gold is the greatest watch case material on planet earth. You could be positive that Roman numerals are the only numerals worth looking at. It wouldn’t surprise me to hear you are obsessed with white dials and white dials only. Why? Because I was all those things from about the year 2000–2010. And when the 5347 dropped in 2006, I believed it to be perfection.

I’ve never liked tourbillons. I don’t have a problem with the complication so much as I do its frequently ostentatious presentation. Too often, it is too much. I feel that is the case with the latest Breguet Classique Double Tourbillon 5345 Quai De L’Horloge. I did not, however, feel that was the case with the Breguet Classique Double Tourbillon 5347BR/11/9ZU. No, instead, I thought it was the pinnacle of class.

The 2020 me like black dials, steel cases, and stick/dot markers. I am a different beast. Somewhere along the way, my tastes changed. My current collection would probably not appeal to the me of 2010. Yes, that does concern me when I consider what the me of 2030 might say about the plethora of sports watches staring back at him, but I’m sure I can convince him they’re not all bad. And yet, as passionate as I am about this style of watch today, I still think that the Breguet Classique Double Tourbillon 5347BR/11/9ZU is a triumph. It is a crazily expensive, six-figure triumph, but a majestic piece nonetheless. But for those of you that like the look of the new one more (like RJ), what exactly does it offer? 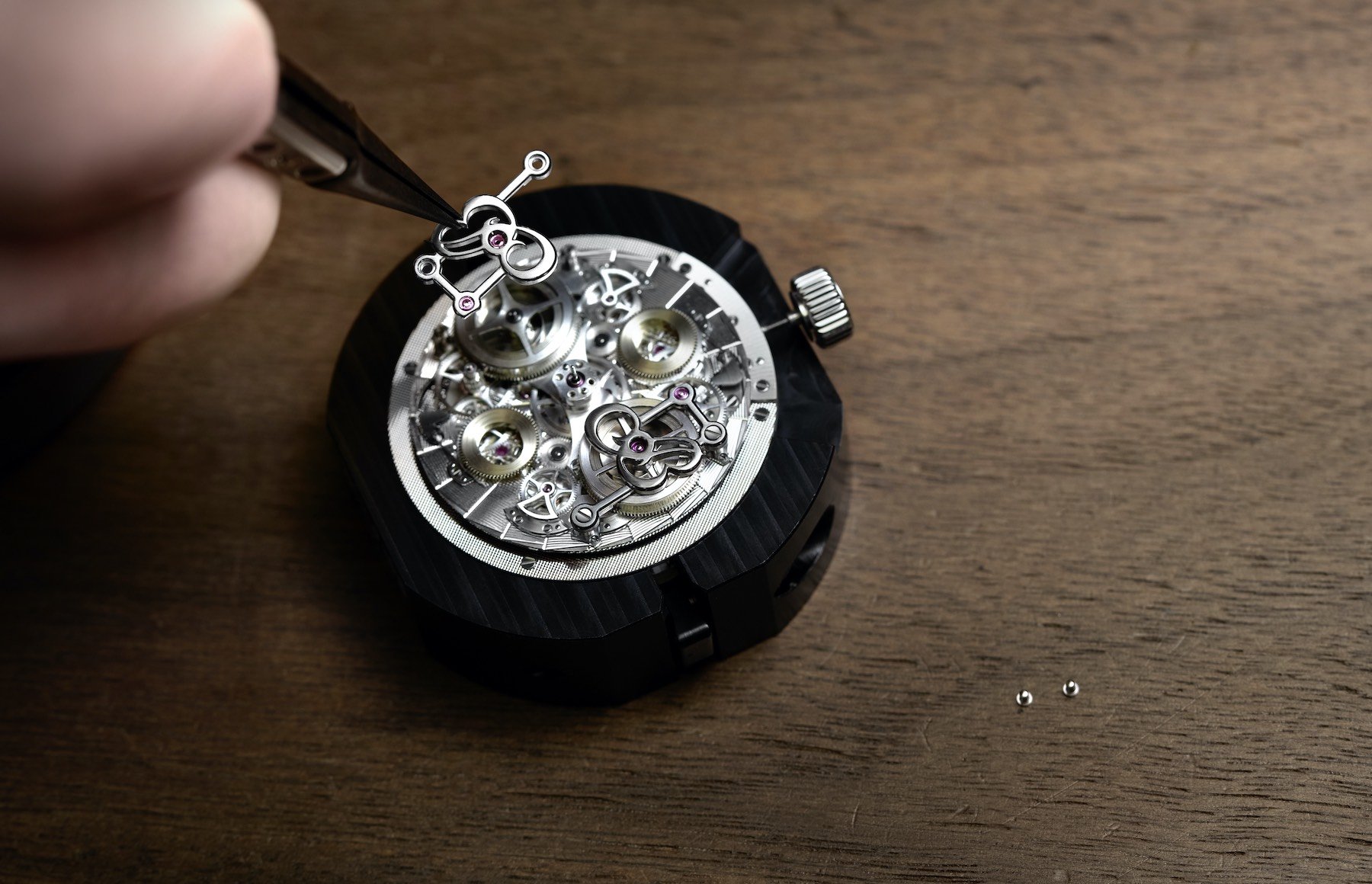 How the 5345 Quai De L’Horloge is different

Regardless of personal opinion, the Breguet Classique Double Tourbillon 5345 Quai De L’Horloge is pretty impressive technically. The mechanism uses the same base movement but adds some extreme aesthetic flourishes. The tourbillon carriage inspired by the 2006 original but has been visually updated. 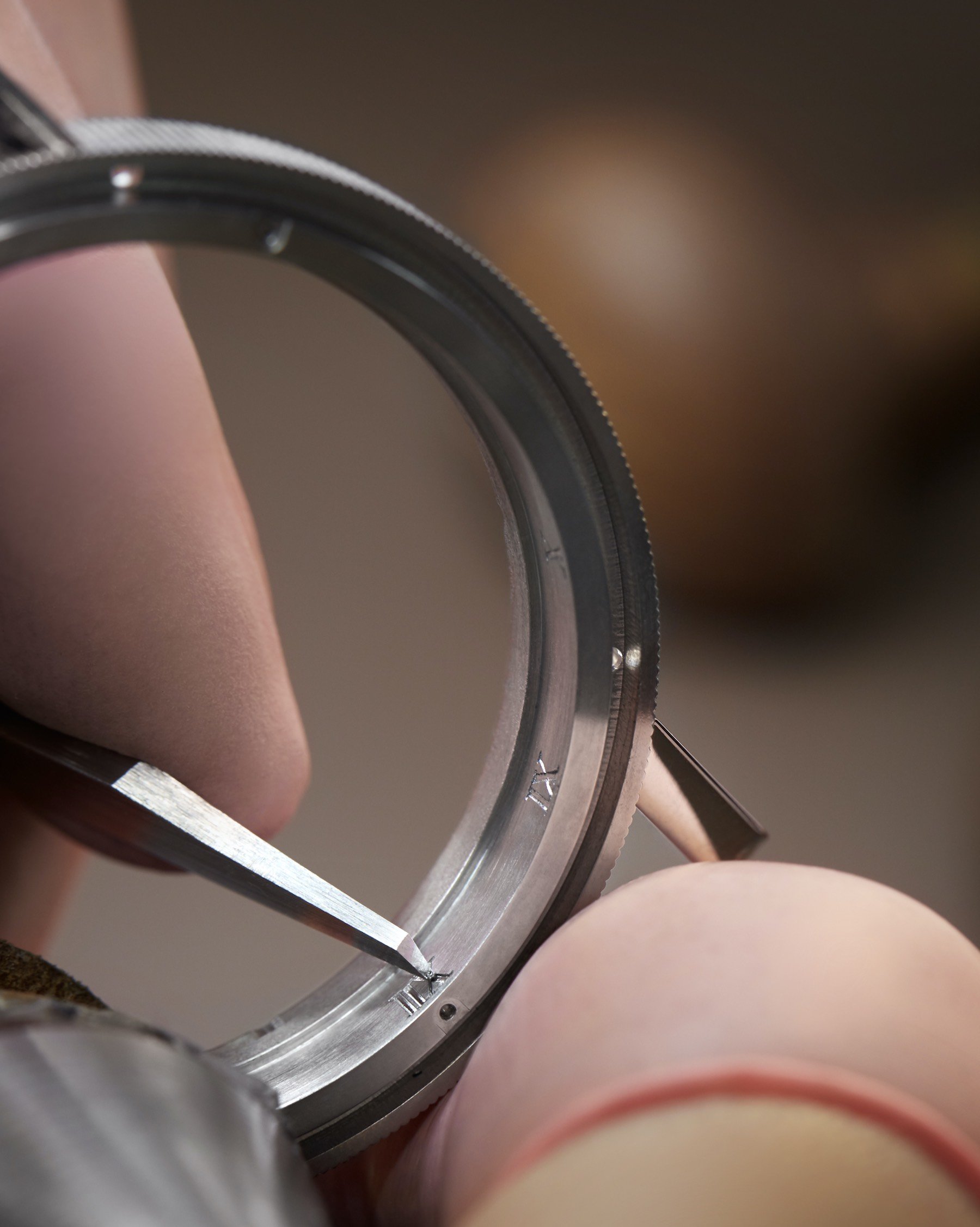 There is a floating sapphire “dial” (more like an hour ring) encircling the movement. Beneath the hour markers, engraved on the inner walls of the platinum case, are Roman numeral “shadows”. This enhances what is an already-arresting three-dimensional effect. 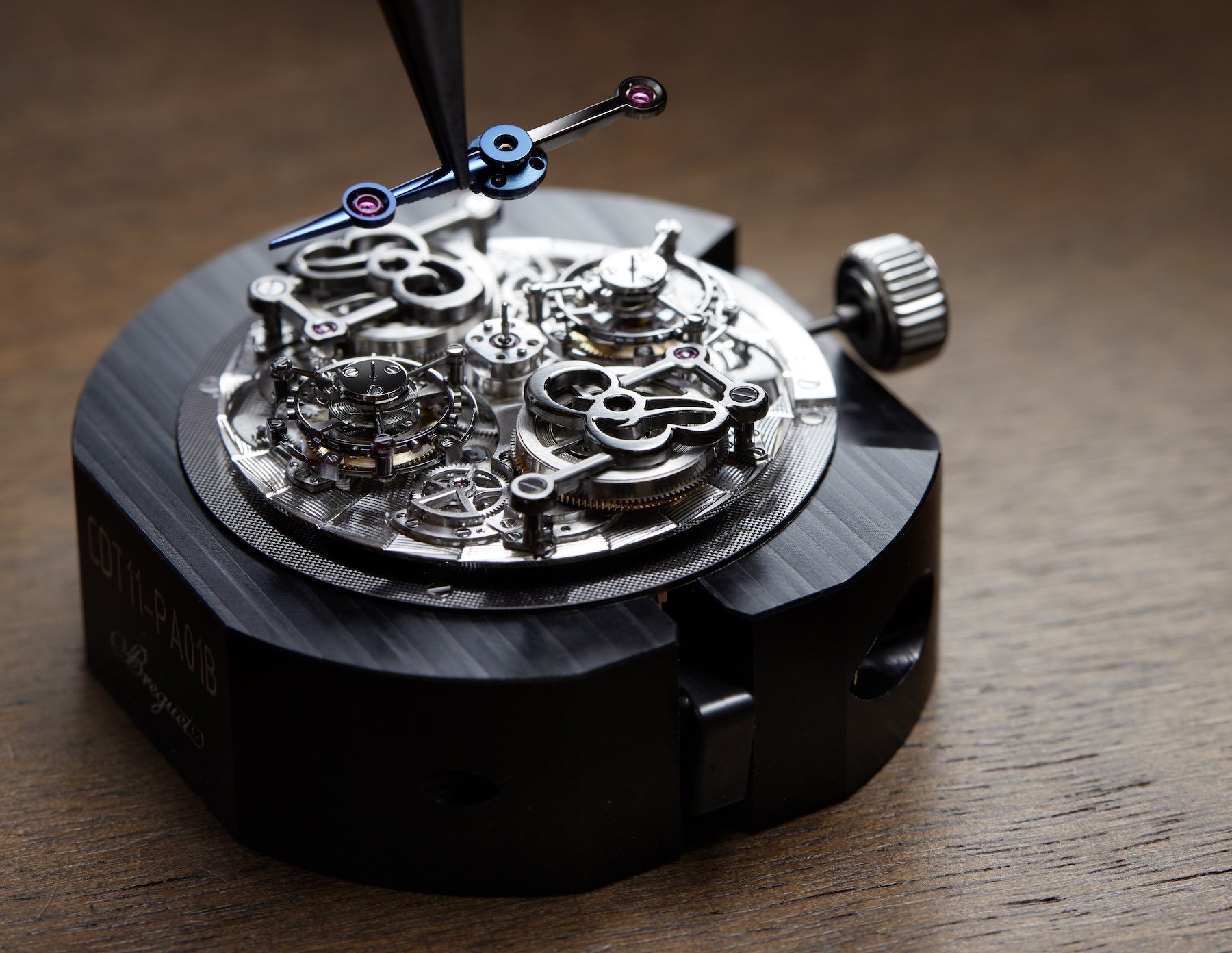 A couple of notable flourishes

The blued hour hand that sits on the crossbar connecting the two tourbillons is probably my favorite of the 730 components used in this design. Perhaps the thing I enjoyed most about the “fly-through” of the movement, was the side-on shot of the hour hand. This classically-styled Breguet indicator is a refreshingly robust component. It is flawlessly heat-blued, which, although one would expect such finishing from the House of Breguet, should be commended given the size of the hand and the naked, exposed surfaces that cannot afford to be anything but perfect considering how openly they are displayed.

…a gimmicky touch that I actually love in theory.

The “B” barrel bridges are cut from steel and hand-finished before they are coated to give them a slight contrast to the rest of the movement. This is a gimmicky touch that I actually love in theory. In practice, I think it maybe looks a “B”it “B”usy, but it’s certainly “cool”. 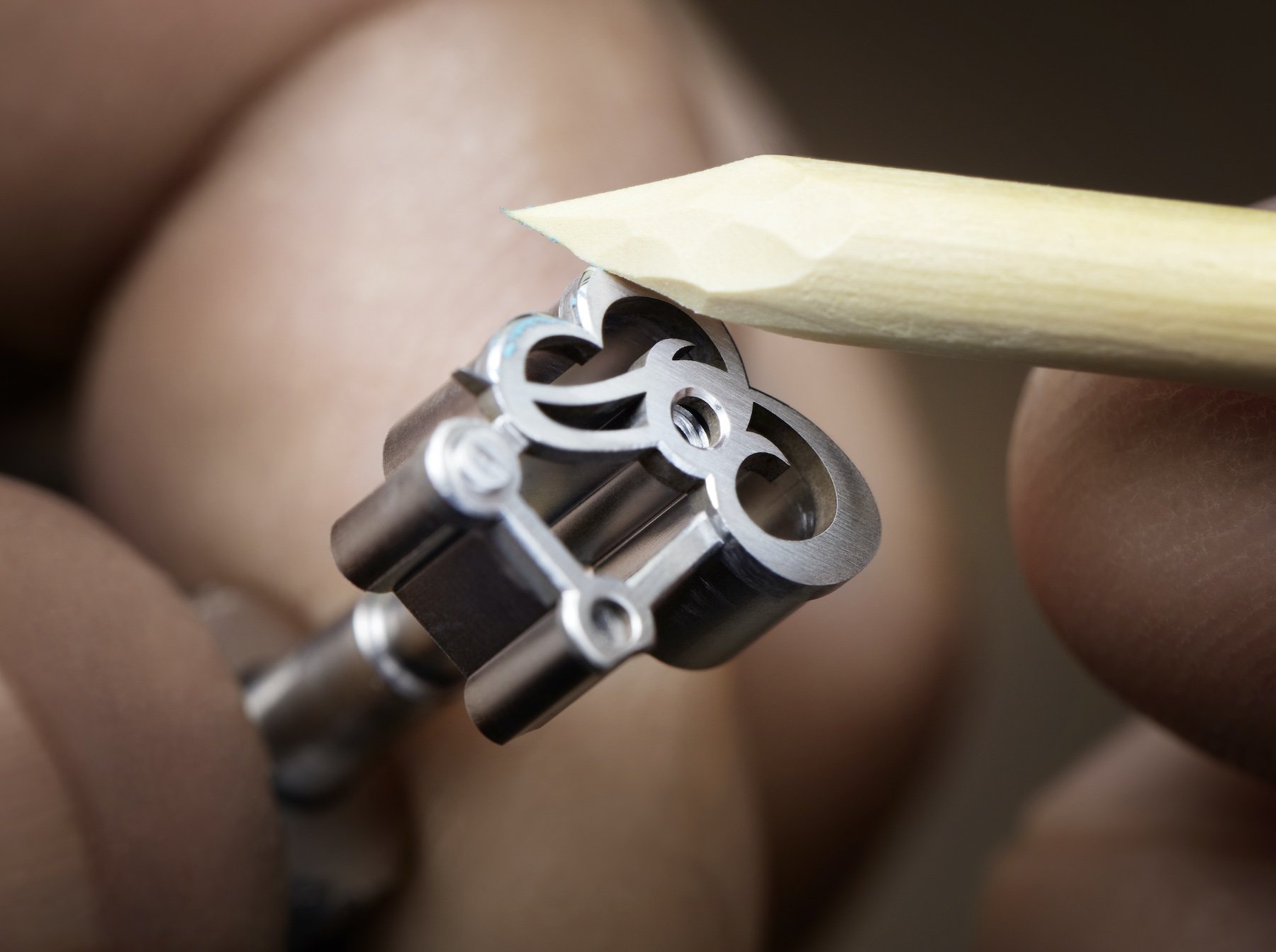 A curious case back view

The case back shows Breguet’s famous building. Hand engraved, this scene provides a solid base for the intricate dial side to rest upon. The golden color of gear train (presumably brass), visible through the windows of the building, is said to represent the light from watchmakers’ lamps flickering away inside Breguet’s workshop. This is a nice, most probably post hoc, explanation for not having coated the wheels or made them from a material that would have faded into the background of this color scheme. In one of the windows of the case back, we can see the face of a woman peering out. Apparently, this engraving was copied from an actual image of Breguet’s workshop that included the very same woman. As such, her presence was retained. 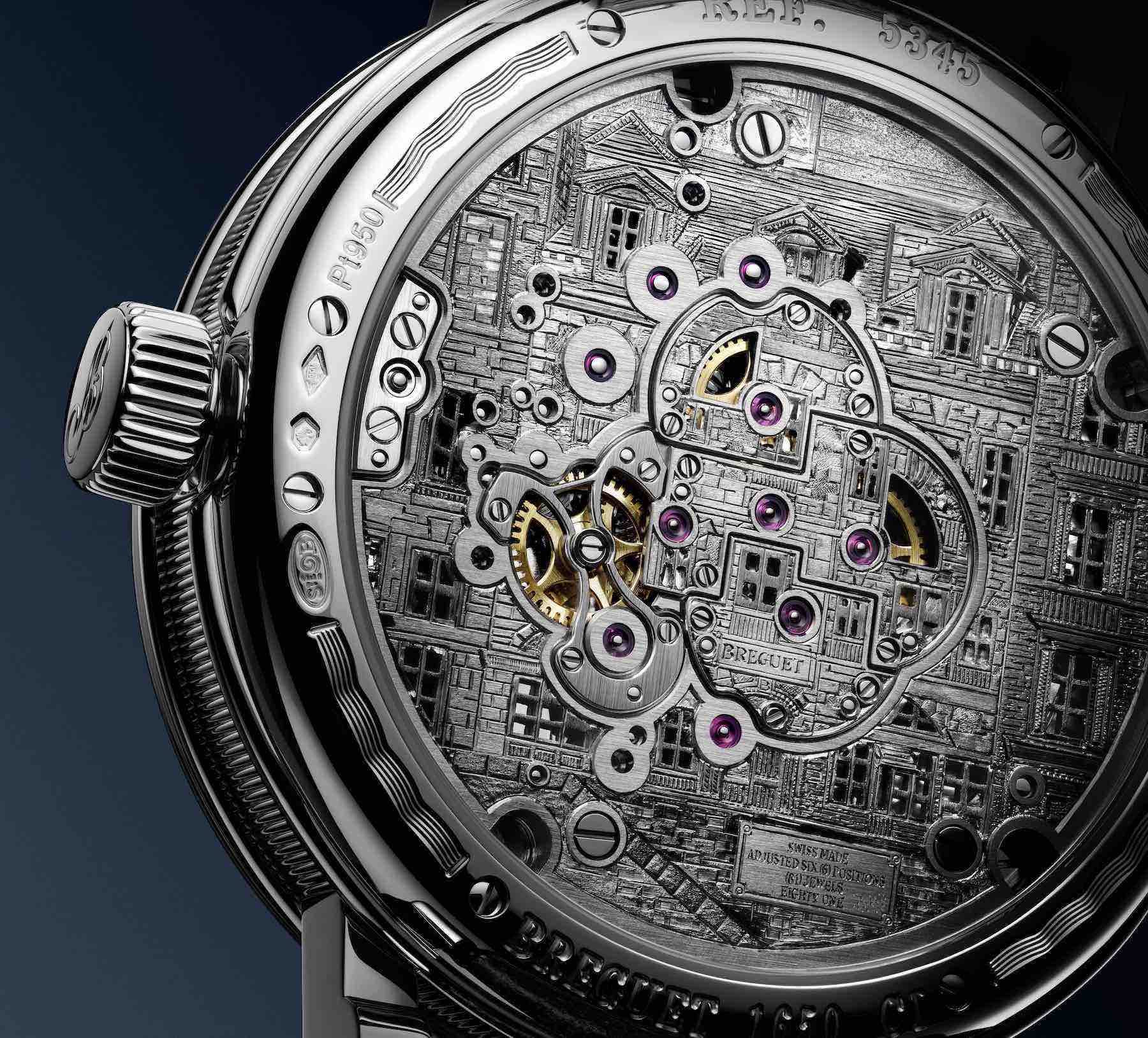 The weight of history

The box-sapphire is bizarrely massive. It is almost the same thickness as the case middle (which is a fluted 46mm platinum band). I’ve yet to strap this one onto my wrist but I can imagine it wearing quite loud and proud. To make the most of the Tourbillon function, visually, the operating frequency is a low (and traditional) 18,000vph. Speaking of tradition, this model still uses a hand-shaped steel hairspring with Breguet’s signature overcoil. 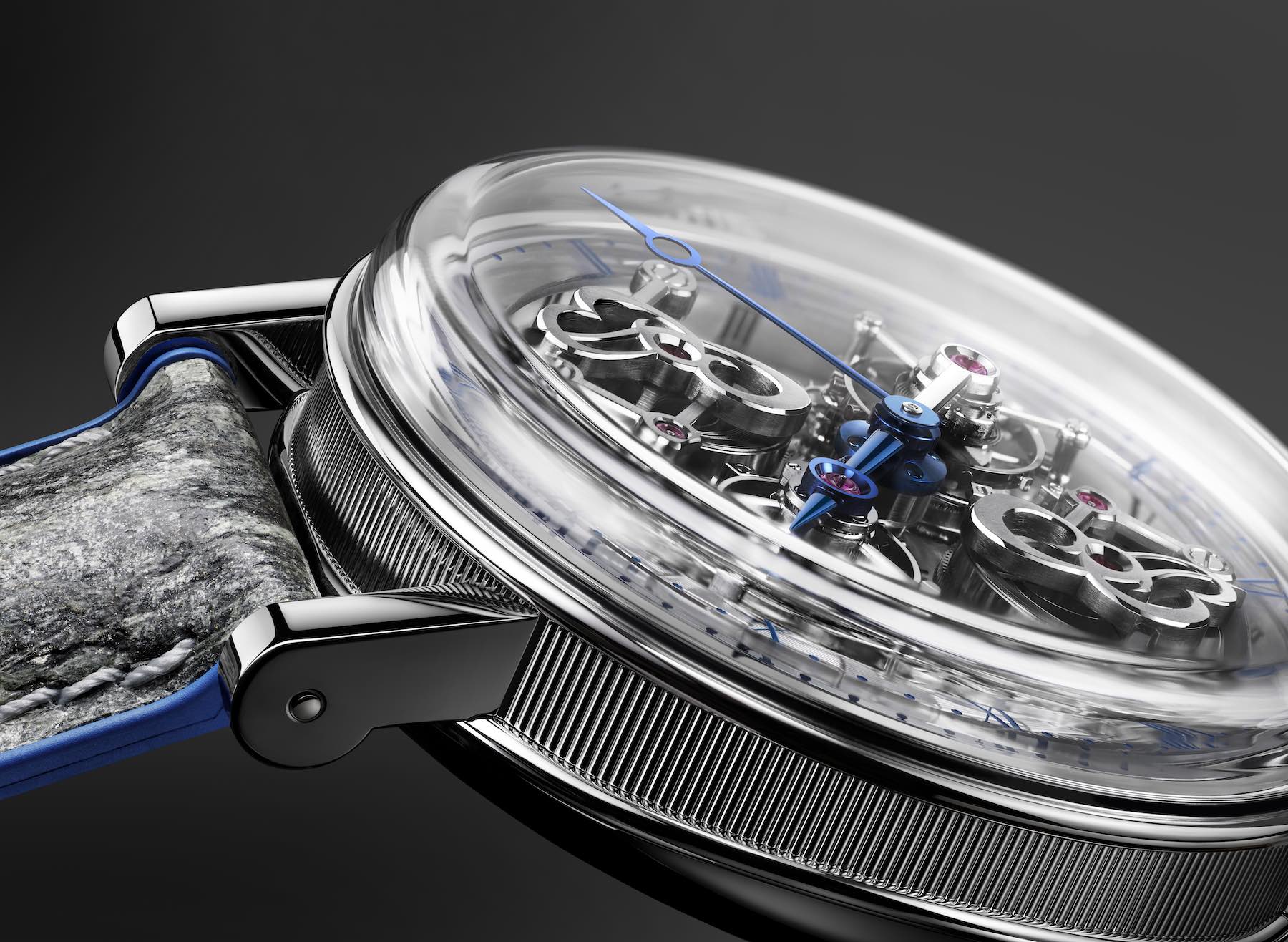 Each tourbillon is connected to its own source of energy (one barrel>one tourbillon). They are thus connected to a differential transmission in the center of the movement averaging the tiny differences of speed generated by the two separate mechanisms. So many years and so many watches have since passed, I had forgotten how much I loved the 5347BR/11/9ZU. I had forgotten how much it inspired me in my early career at the bench. Now, more than a decade later, I am glad to have been reminded of this family (and am sure I will never forget it again thanks to this, latest bold addition). Learn more about Breguet here.