At the end of the 1955 Farnborough Airshow, the British Prime Minister, Sir Anthony Eden, flew in an Avro Vulcan bomber. Though most pilots were bundled up in military flight suits and helmets, one figure stood out, cutting a dash in his tailored Savile Row business suit, shirt, and tie. It was the Vulcan’s flamboyant pilot, Wing Commander Roland ‘Roly’ Falk, and that was his standard flying garb.

Overalls were from the biplane and propeller era. Falk saw the modern jet cockpit as an extension of his office and dressed accordingly. One of the maxims he applied to an aircraft was, “If it looks good, then it will fly well”. This was certainly true of the Avro Vulcan, which Roly also piloted on its maiden flight in 1952. 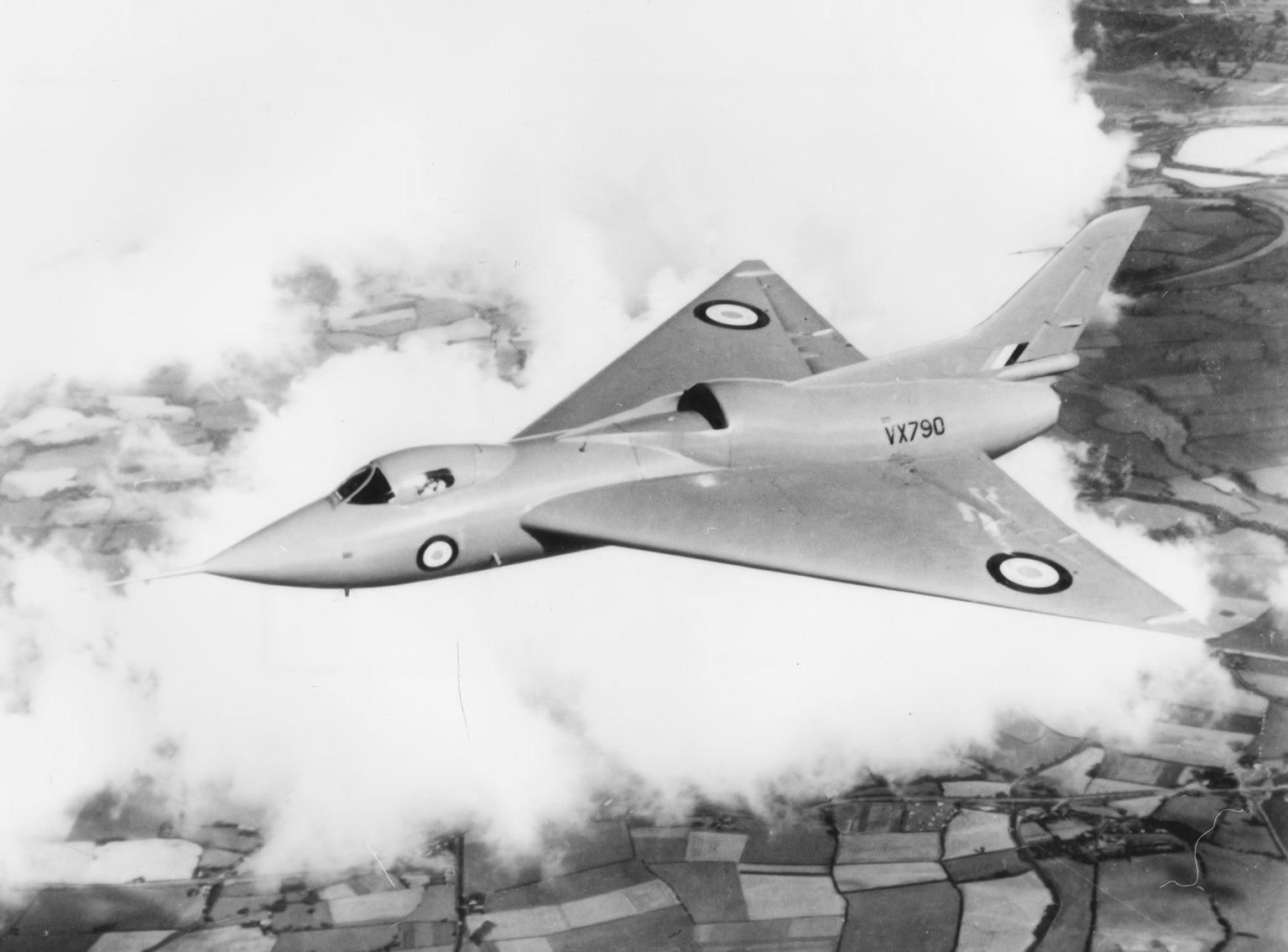 At that time, the space-age Vulcan was the fastest operational bomber. It was also the world’s first delta-wing four-jet-engine bomber, and those powerful Rolls Royce Olympus engines would go on to power Concorde airliners. During Falk’s first routine of the 1955 show, the suave test pilot famously and effortlessly barrel-rolled the large 69-ton aircraft on his takeoff climb, to the delight of the crowd and the consternation of the authorities as it was ‘‘not the done thing’’. Ever the professional, he had, in fact, carefully calculated the impressive maneuver, maintaining a slight positive G to avoid stress on the airframe. It was Roly who had pushed for a fighter stick control column in the Vulcan cockpit rather than an old-style bomber control wheel or yoke. And as he aptly demonstrated, the aircraft was indeed as maneuverable as any jet fighter of the time. 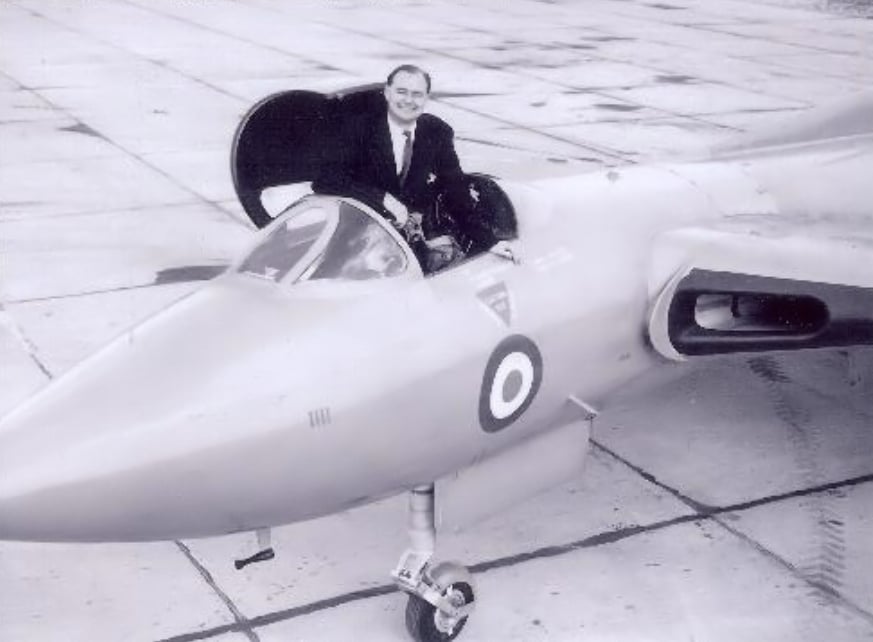 Roly Falk ready to pilot the Avro 707A prototype. Used with permission from johnfalk.com.

Before we examine his wristwatch selection, let’s first get to know a bit more about the man. Born in 1915, Roland ‘Roly’ Falk always wanted to fly. He cut his teeth piloting commercial airway charter flights in many dangerous and exotic locations during the Golden Age of aviation. At the start of the Second World War, he already had 3,300 flying hours and too many adventures under his belt to list here. 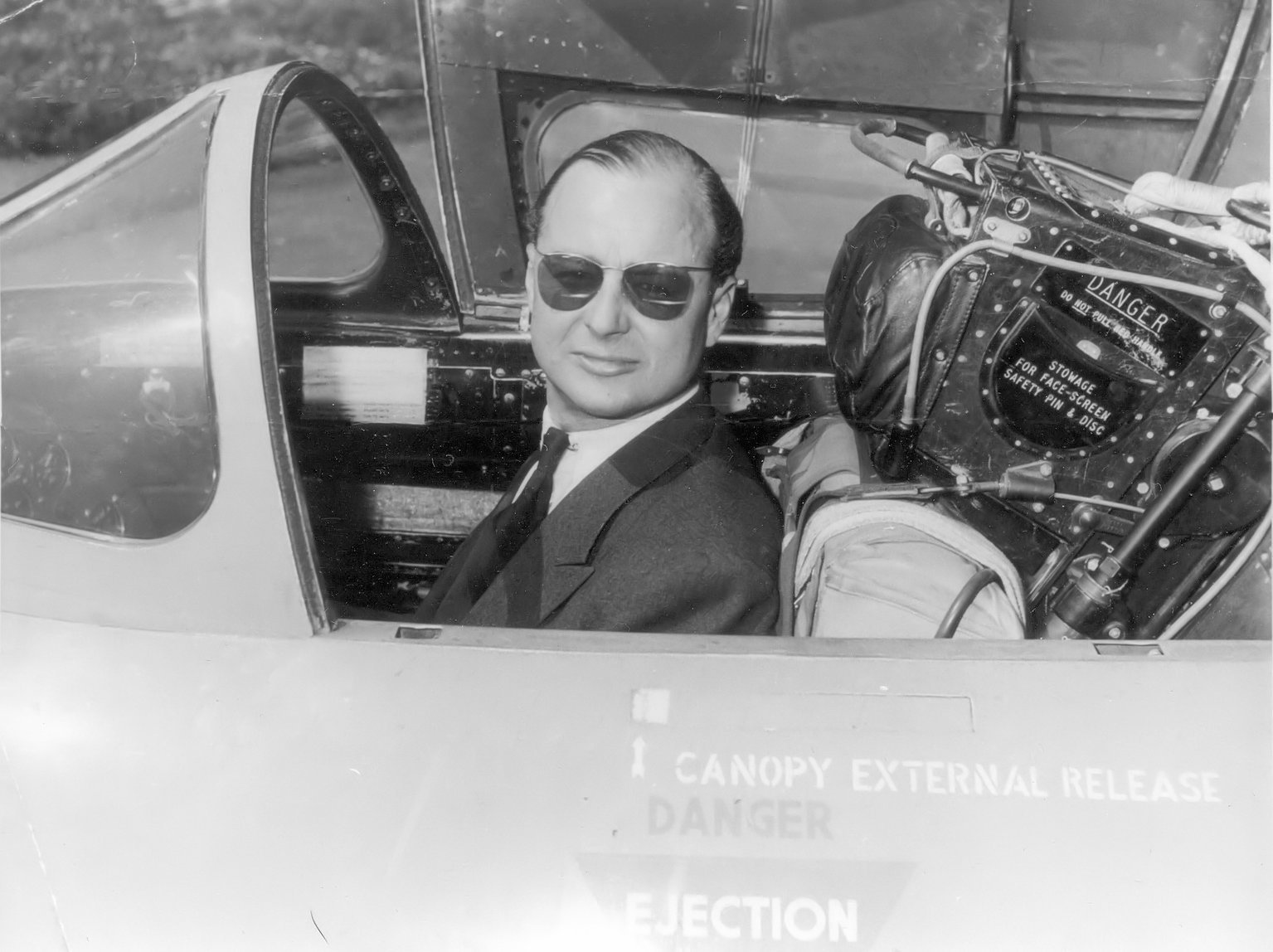 His exceptional flying skills led him to join the RAF as a test pilot. In this role, he aided in the development of the technologies and tactics that helped win the war. During this time, he also took a busman’s holiday to go on active service undertaking night fighter missions. He also flew many captured German aircraft for research, including the Messerschmitt Me 163 Komet and the Heinkel He 162. His vast experience laid the foundation for his success in test piloting the single-seat Avro mini-Vulcan delta-wing prototype aircraft during the development of the Vulcan. 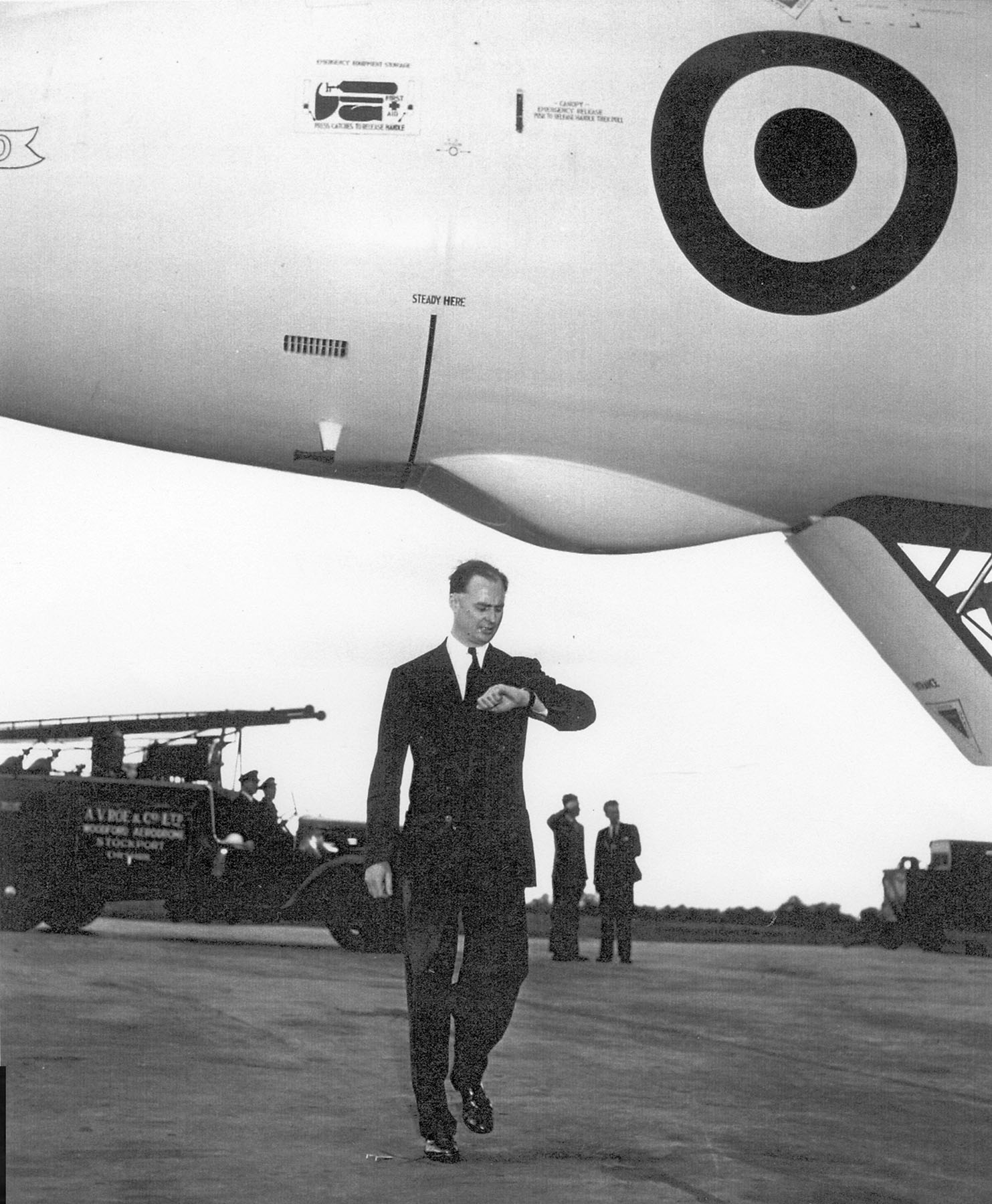 Falk probably purchased his wristwatch to celebrate his demobilization and his move to becoming a better-paid civilian test pilot for the burgeoning UK military-aircraft industry as it thundered into the new jet age. 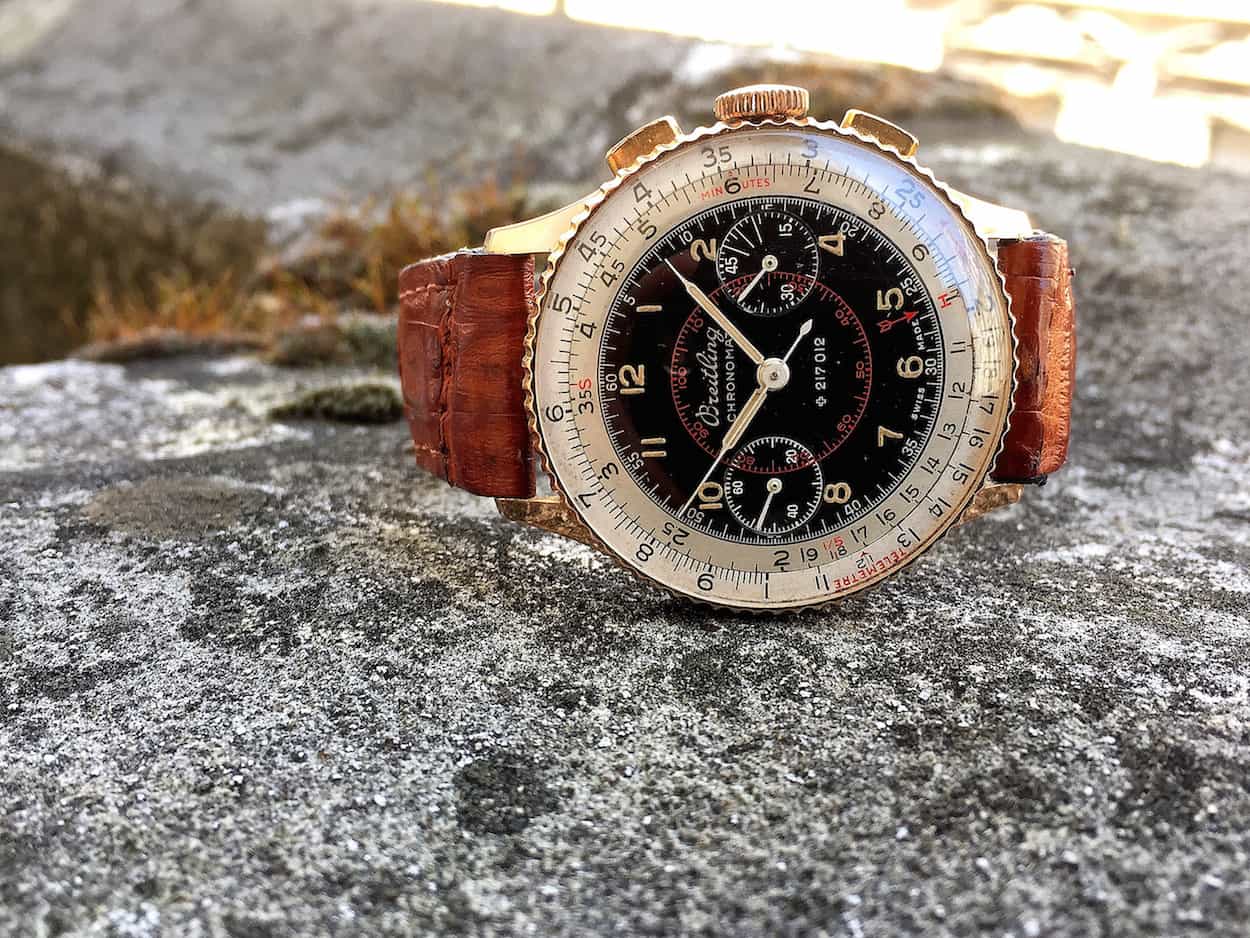 An example of a Breitling Chronomat 769 (not the specific watch from this story). Photo by Fred Mandelbaum.

In 1945, he selected a Breitling Chronomat 769, which was designed as a chronograph for mathematicians and engineers with a rotating logarithmic slide-rule bezel. It was cutting-edge technology for its day and very fitting for a pilot helping to develop and fly such advanced aircraft. Of course, over the years, Breitling has become synonymous with pilot’s watches. Famously, the Vulcan pilot in the James Bond film Thunderball wore a Breitling Navitimer. 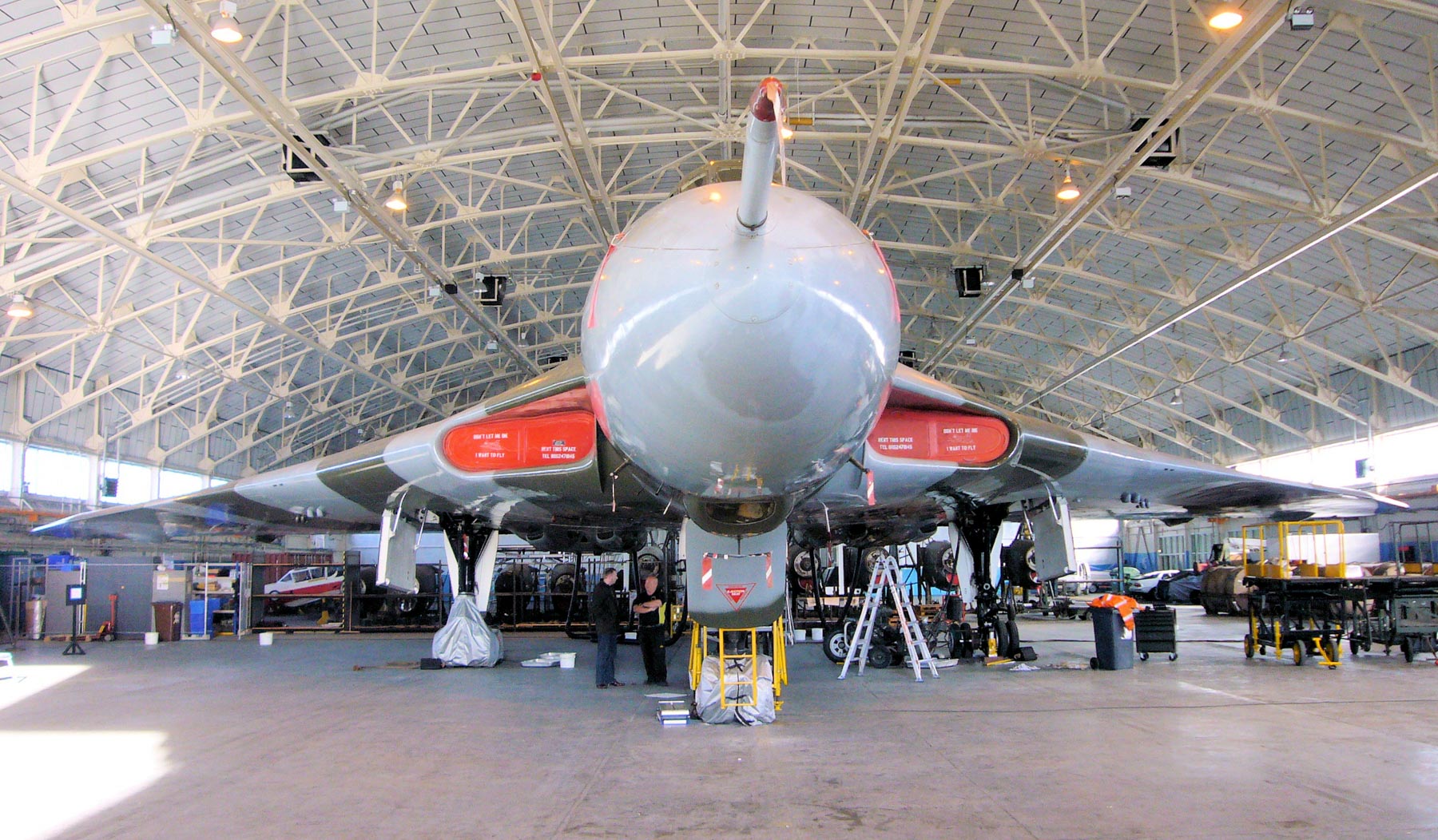 In 1964, before shooting began, set director Peter Lamont gained unprecedented access to the Vulcan nuclear bomber’s secret base at RAF Waddington. Falk had regularly flown into this base, and although he had retired from test flying in 1958, I do wonder if there was a link. Suited and booted for action, fictional Commander James Bond certainly took some sartorial style cues from Wing Commander Falk. And like Mr. Bond, Roly Falk never lost his cool in a crisis. He survived many life-threatening incidents thanks to his unflappable and professional approach. 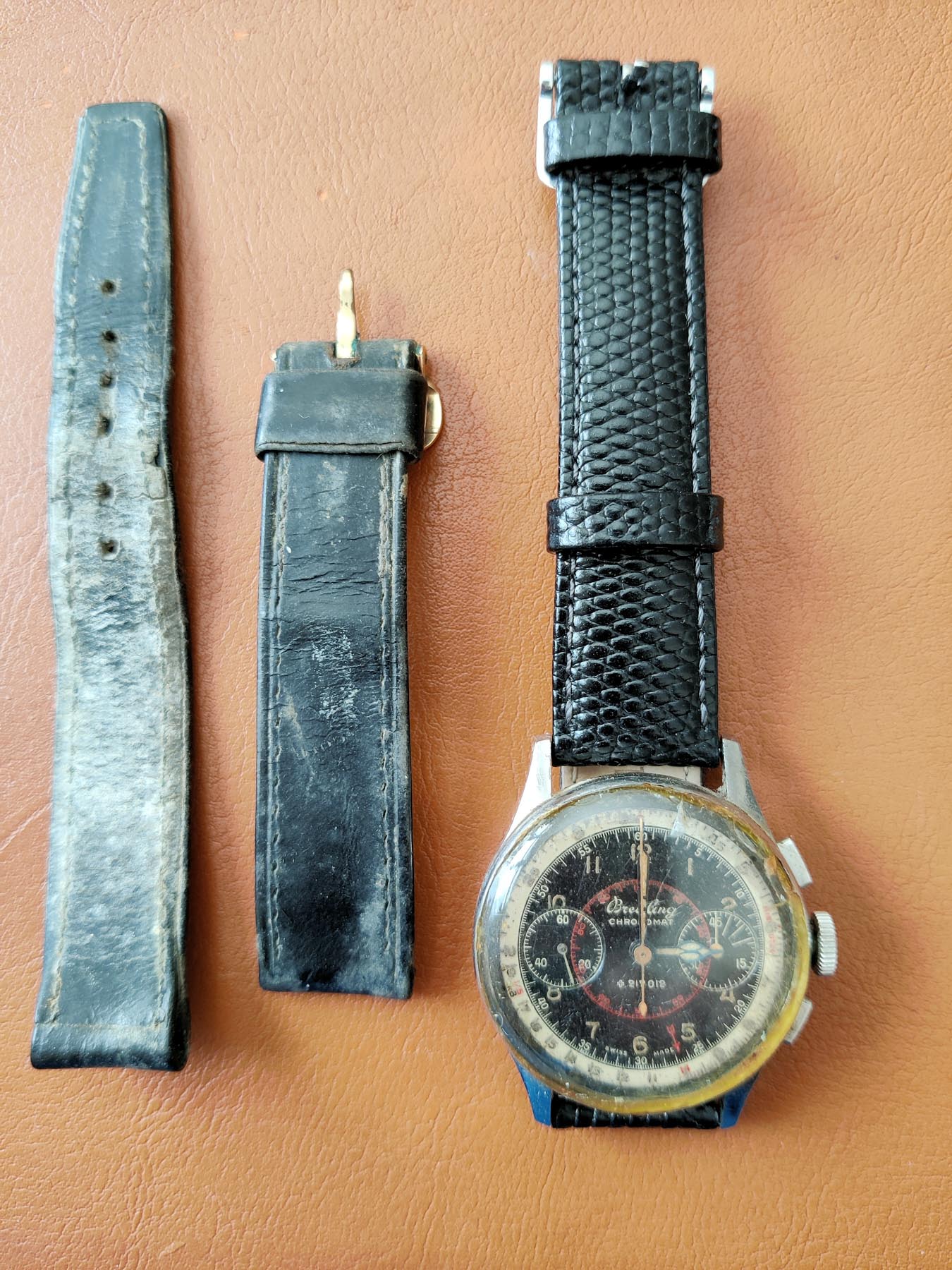 You can see from the pictures that his watch was well used and had a hard life. At some point, it lost its bezel, which is not so unusual for a watch produced in 1945. The hands have also been changed to cathedral-style hands, which probably date to before World War II. In 1946, Roly was flying a Wellington Bomber to test a new reverse-pitch propeller system. Due to a technical failure at a low altitude, the aircraft crashed into a house. Miraculously, Falk survived. Despite being very badly injured, he was able to get himself clear of the debris and resulting fire. His first thought when rescued was to ask if the house was empty. Thankfully, it was. It took him a year to recover from his injuries, and I suspect the watch was also damaged in the crash. This may be why the hands were replaced. 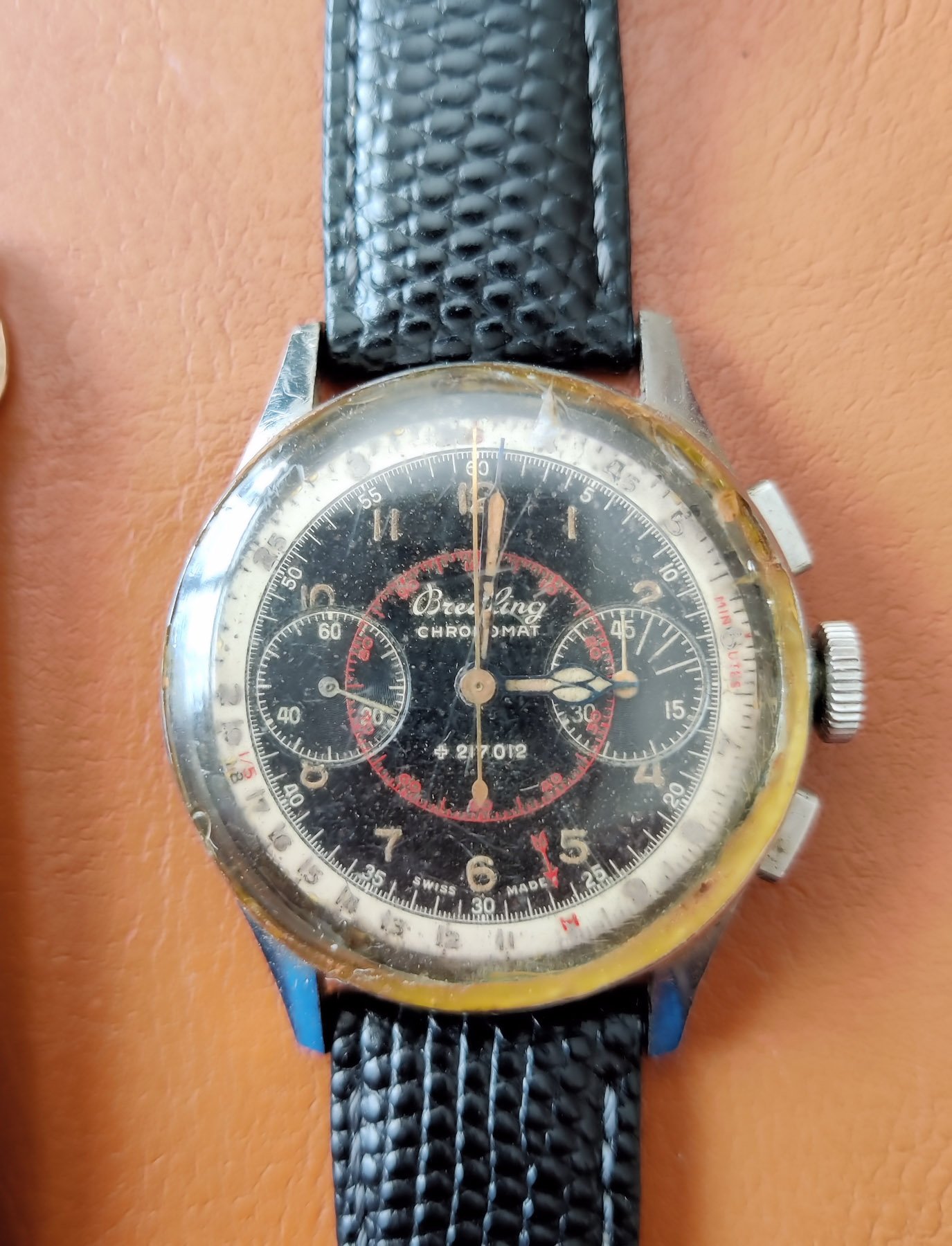 As a test pilot who became the Superintendent of test flights at A.V. Roe, time and calculations were critical to Roly’s daily work. It was the Breitling Chronomat 769 that served him well from 1945 until his retirement. A consummate professional, and having flown almost every type of aircraft possible (over 300 types), he also knew when it was time to stop. Roly Falk retired from flying in 1958. He went on to have a successful business career in aviation until his death in 1985. 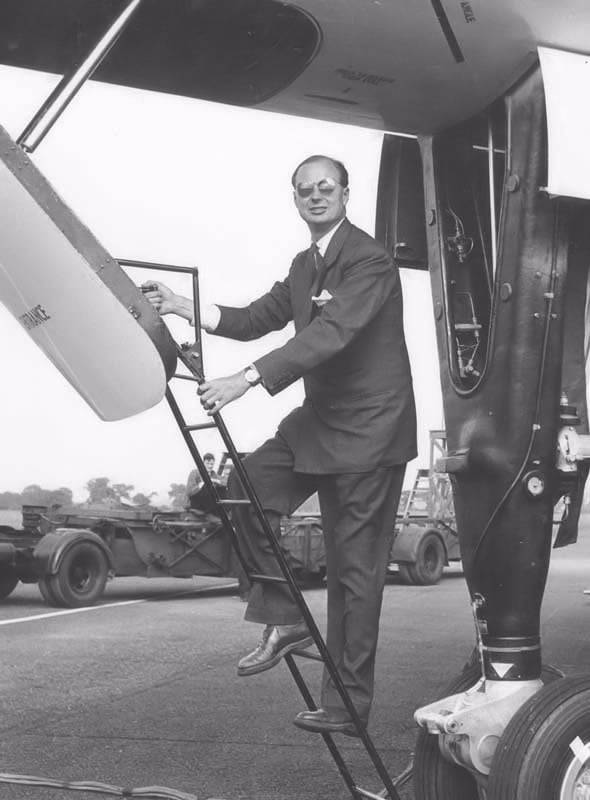 I am indebted to his sons (John and Geoffrey) for their support in researching this article. I am also grateful for the help of publisher Graham Simons and the excellent book by Peter V. Clegg, Test Pilots of A.V. Roe & Co. Ltd R. J. ‘Roly’ Falk, which tells the full story of Falk’s exceptional flying career.

Alan Bessant, aka Omegafanman, is a contributor to the Omega Forums and researches famous aerospace pilot watches as a hobby. If you have a watch with a story that you would like featured, you can contact him at [email protected]