The design of the Submariner 114060, is unmistakably Rolex, despite the size and use of modern materials such as ceramics. Compare the modern 114060 to the 1953 Rolex Submariner 6204 and you will immediately notice that these watches share the same DNA.

Owning and wearing a Rolex Submariner is one thing, but to dive into the history of this watch is quite a task. To make it somewhat easier for you, we hereby show you the history of the Submariner in a nutshell, including a table with most important references since 1953 till the current line-up of Submariner watches.

The Rolex Submariner is a watch with an interesting story. Introduced over 60 years ago, the current Rolex Submariner model (updated in 2010) is a product of a long history and development. The similarities are clearly visible while the innovations are as well. A ceramic bezel, masculine case and solid bracelet with an easy-to-adjust folding clasp meet all the requirements of a modern watch while the design goes back to 1953. 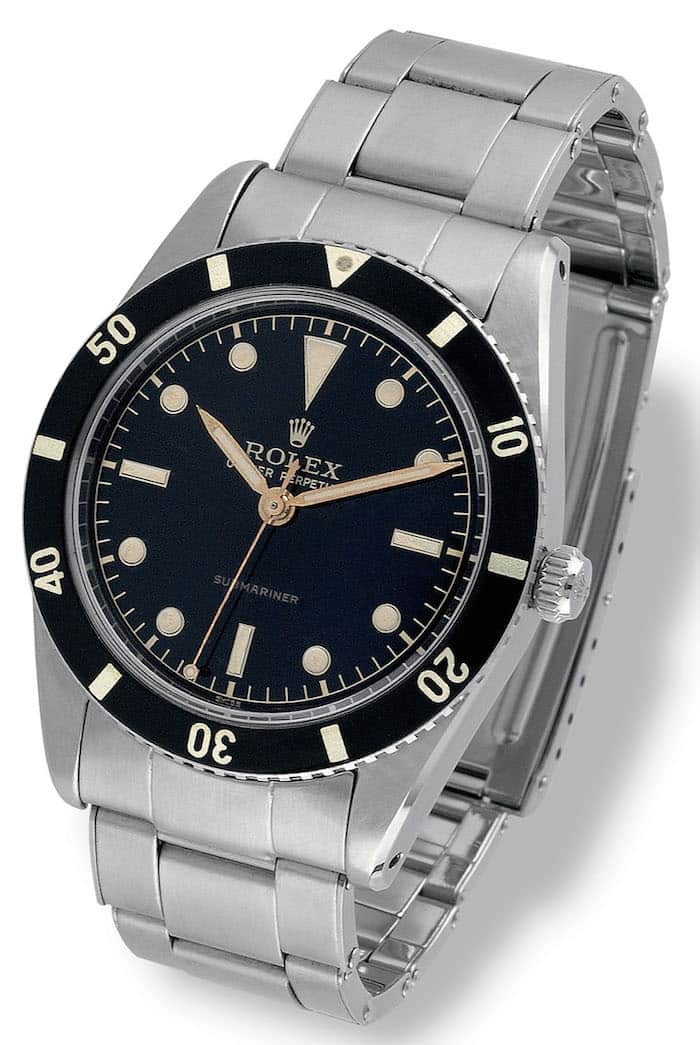 The water-resistant Oyster-case with a screw-down crown and the self-winding movement for wristwatches are ingredients of the Rolex Submariner that we own to Rolex founder and president Hans Wilsdorf. He was a genius businessman and perhaps even a better marketeer. He was also known for his open mind regarding new ideas and cared about what his employees had to say. René-Paul Jeanneret, an experienced and valuable member of the board of directors was a passionate diver. It was this René-Paul Jeanneret that came with the idea of developing a watch that wasn’t only suitable for use in the water, but also as an elegant timepiece for everyday use. 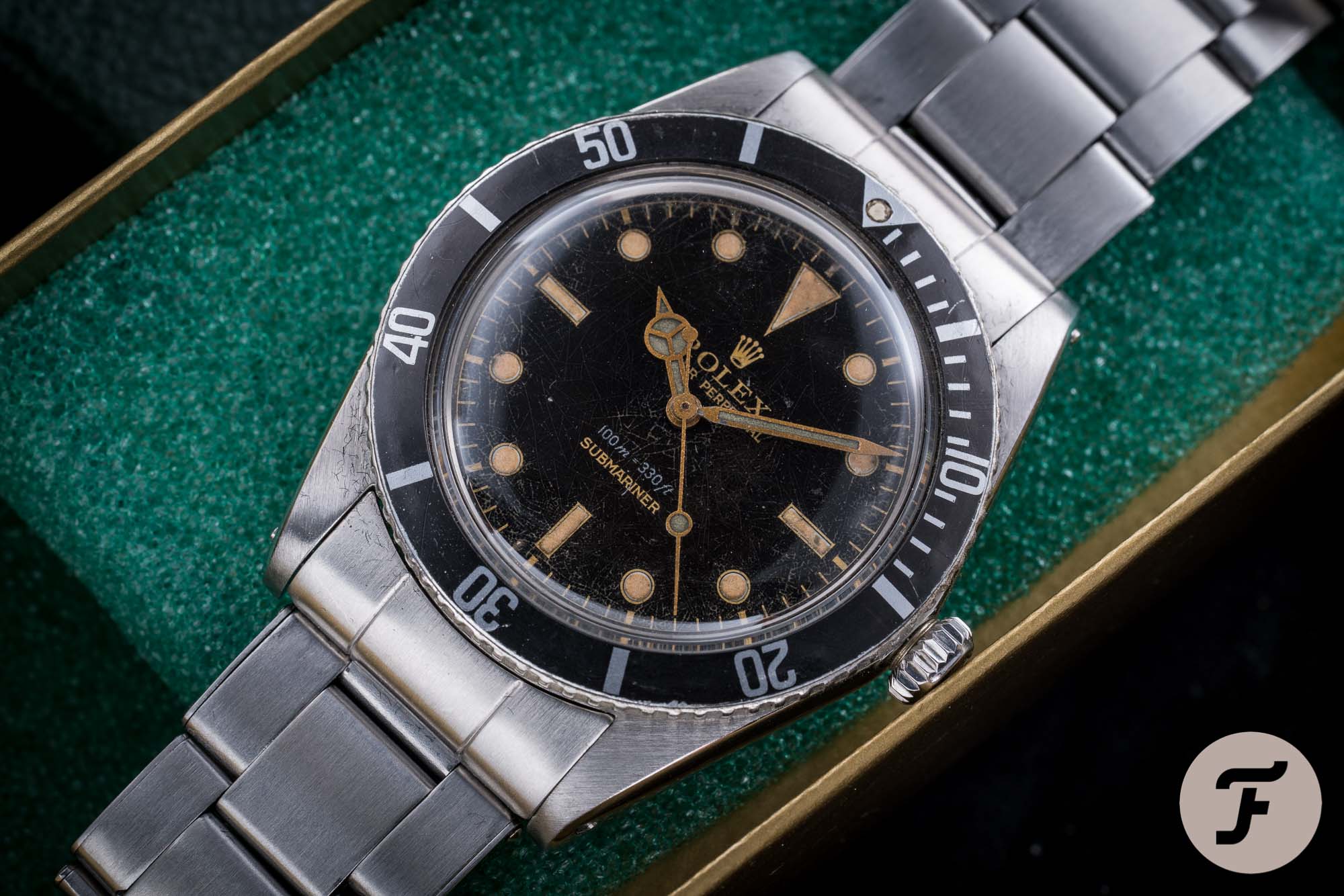 The discussion about the use of such a timepiece in the existing collection was being held more than once, as the existing Rolex models at that time already were water-resistant and elegant. However, they were not the diving watch that René-Paul Jeanneret had in mind. Functional sports watches became an important topic and resulted since 1953 in watch collections with bold names like Turn-O-Graph, Explorer, Submariner, Milgauss, and GMT-Master. It made Rolex grow like never before and mastered in creating watches that are suitable for any type of environment or (sports) activity.

Water resistant watches were already in the Rolex collection since the early 1930s. In 1935, the Rolex catalog showed a 47mm cushion-shaped Oyster-case watch with reference 2533. It had a pocket watch movement inside, a Lépine hand-wound movement with a small seconds hand at 9 o’clock. It didn’t get any follow-up as there was no interest in watches with a huge case diameter like this.  However, this cushion-shaped watch did pave the way for a partnership with Panerai. Back then, Panerai was an Italian Rolex dealer and specialized in diving equipment. The Panerai Radiomir models with cushion-shaped Oyster-cases with a Cortébert caliber movement supplied by Rolex inspired the Geneva company and gave them very useful feedback on divers watches. Most likely did it also gave useful input for Jeanneret’s Rolex Submariner.

Jeanneret had a close relationship with the famous Jacques-Yves Cousteau, which lead to enough input to convince the decision makers at Rolex at that time to develop a professional diver’s watch. In those first years of the 1950s there was a lot of experimenting going on with regards to their professional diver’s watch. The name ‘Submariner’ wasn’t being used at that time.

Diver’s Tests Paved The Way For The Submariner

In September 1953, Rolex let the World know – in a spectacular way – that they were able to produce a diver’s watch. Auguste Piccard dove 3131,8 meters in the Ocean with his Bathyscaphe deep-diving submarine. Affixed to the vessel’s hull was Wilsdorf’s Rolex watch especially created for this adventure featuring a clearly visible Rolex logo and luminous dial. When the Bathyscape rose out of the water, the Rolex watch was still working properly.

Later on, in 1960, the submarine Trieste, with its 2-meter-wide pressure sphere descended for the 65th time into the depths – this time with the goal of reaching the Challenger Deep in the Mariana Trench, the deepest point in the ocean. Inside the pressure sphere were Piccard’s son, Jacques Piccard, and the Dan Walsh. Outside the sphere was a very special Rolex prototype, a watch, with Oyster case, designed to withstand the pressure of the 10,916-meter descent, which exerted a pressure on the vessel of about 1,125 kg/cm. The idea, of course, was to prove that the Oyster case could survive the ordeal. Just as with the 1953 Bathyscaphe dive, the Rolex looked and ran exactly as it had above the water. 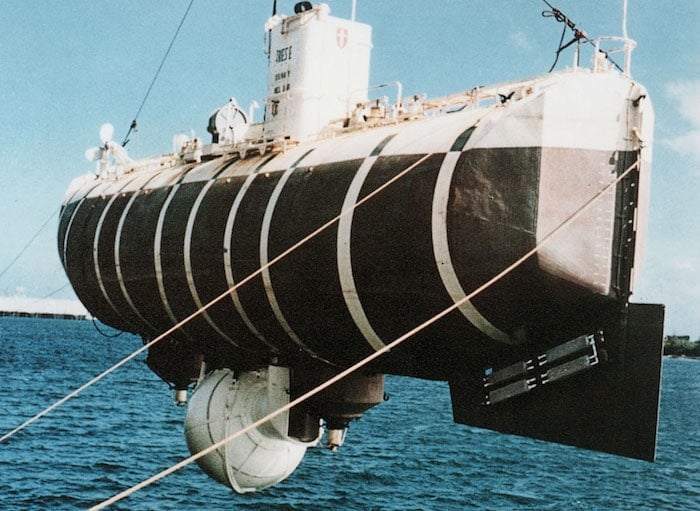 Achievements like that created a lot of attention and awareness. There was demand for watches that could take a bit of abuse during sports but also during everyday wear. Visitors of the Basel fair (nowadays BaselWorld) in 1954 were happily surprised to see a big display window (one of five) with a wristwatch featuring a matt black dial, big luminous hands and indexes and a rotating bezel with markers about 5 minutes apart. The zero-position on the bezel was marked with an arrow with a luminous pearl in the center. A small sign said “Submariner – the diver’s friend”. In other words, Rolex created a professional diver’s watch with an automatic movement with a water resistance of 100 meters thanks to the screw-down crown system called Twinlock. 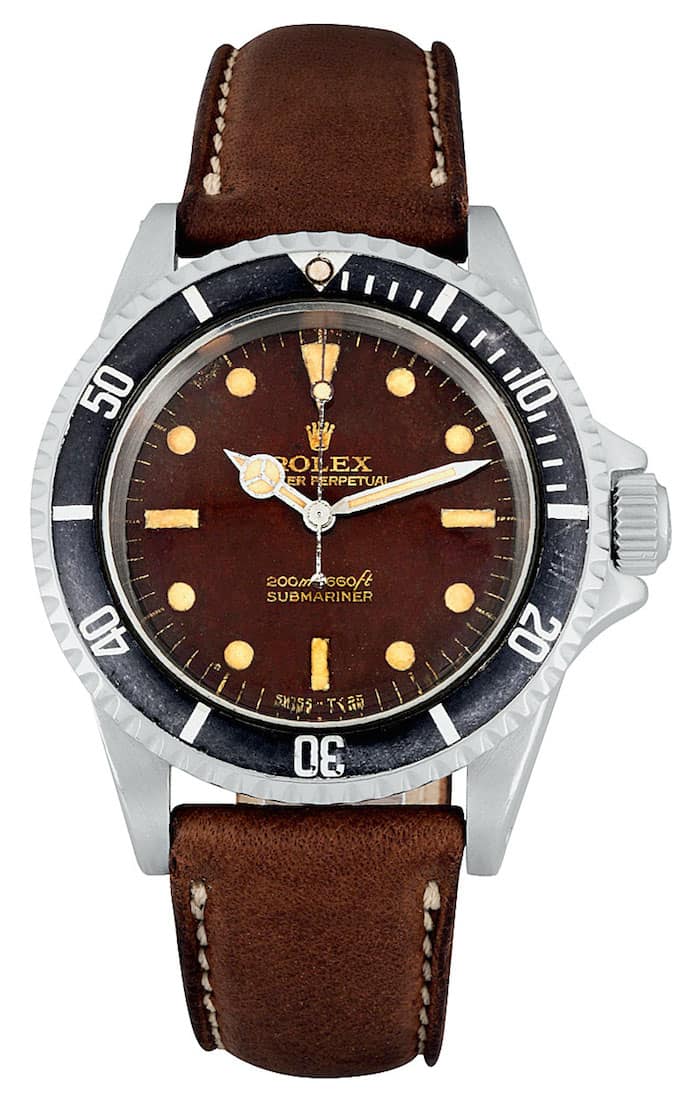 By the time it hit the market, the Submariner had passed rigorous field tests. The Institute for Deep Sea Research in Cannes issued a report on Oct. 26, 1953, on the five months of tests it had conducted with the watch, consisting of 132 dives in depths of 12 to 60 meters. The statement from the laboratory read as follows:

“Despite the extremely high salt content of the Mediterranean waters, and the tropical temperature and humidity to which the watch was exposed between the individual dives, it showed no corrosion at all. …Likewise, no moisture was detected within the watch. All other previous tests with water-resistant watches from top brands showed water penetration from the first moment of the dive, indicated by the condensation that formed on the inner surface of the crystal. The watch was worn multiple times during dives with an extended crown (i.e., the crown was pulled out to the position for setting the hands). To conclude these tests, the watch was attached to a thin cord and dropped to a depth of 120 meters – twice as deep as 60 meters, the maximum depth achievable with self-contained compressed air equipment. No leaks were detected even after a one-hour period at this depth.”

Rolex used the feedback and input of many experts while developing the Submariner. Jeanneret offered many ideas for the outer design of the case, dial and rotating bezel (which at that time still turned in both directions) for underwater reading of the remaining time of the dive. 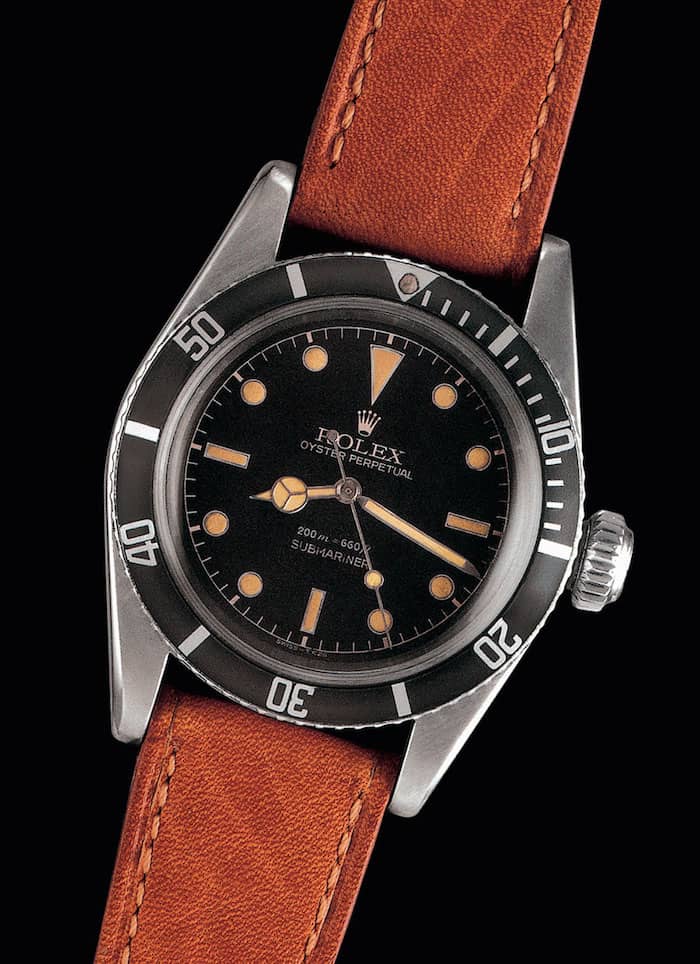 An Evolution of Decades

You can hardly speak about revolutions at Rolex. Evolution is a better word. Moreover, Rolex achieved this continuous evolution over decades, also for the Submariner collection. The table below gives an overview on the evolution of the Submariner:

Rolex avoided any type of experimenting with the Submariner design. If they would have, the Rolex Submariner probably wouldn’t what it is today: a classic! 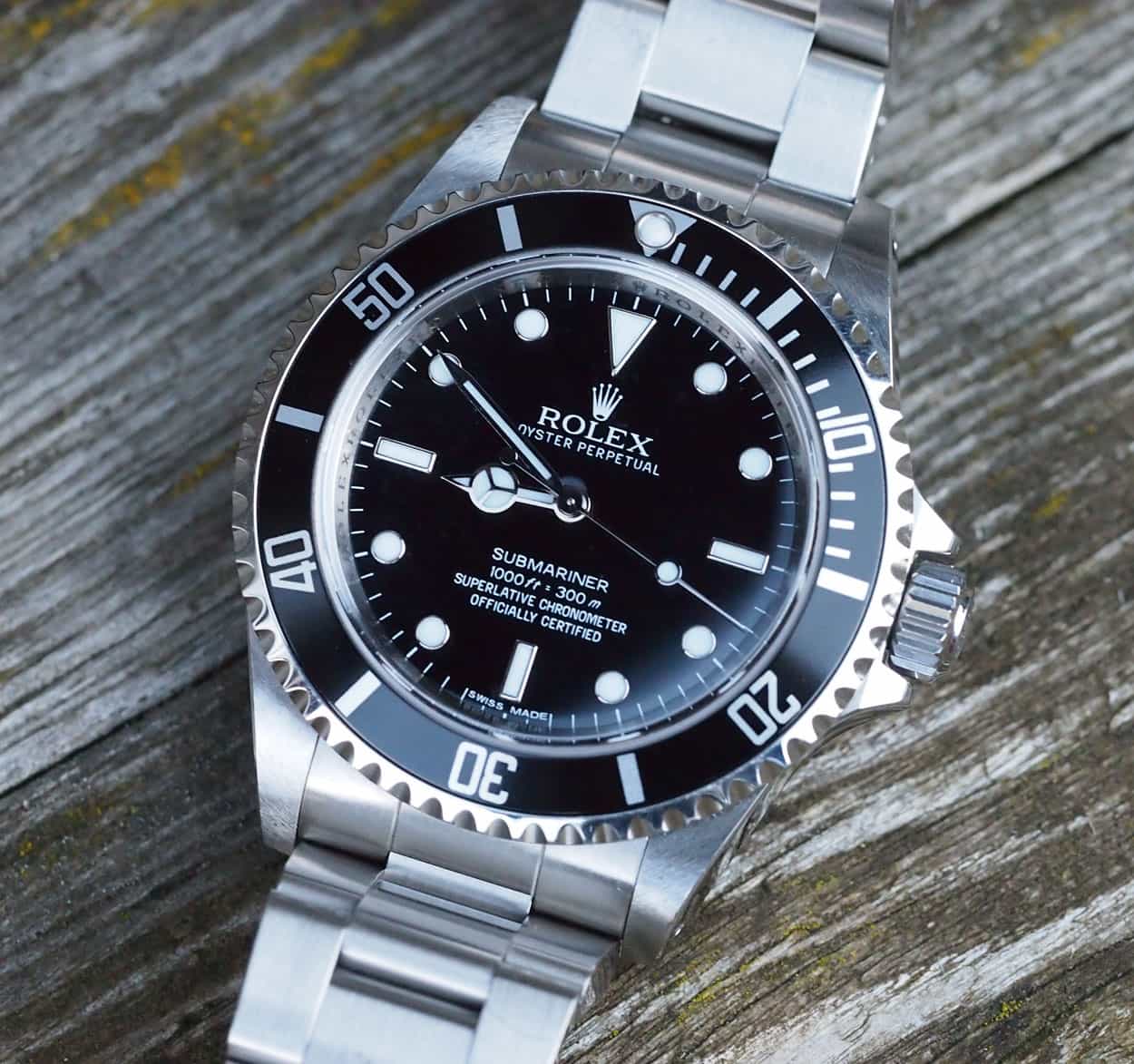 One question that comes to mind when looking at the table above is: Why did it take Rolex until 1981 to come up with something as vital as a uni-direction bezel? The answer is quite simple: There was a patent on the uni-directional bezel since 1952 (by Blancpain for their Fifty Fathoms watch). Rolex wasn’t the only brand bothered by this patent! 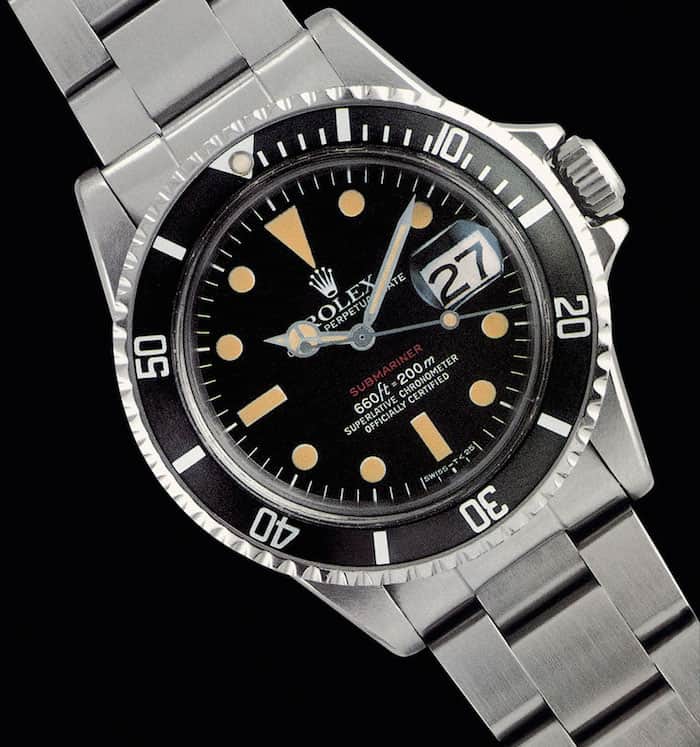 More information on the Submariner and the current models can be found on the official Rolex website.

*This article appeared on Fratello Watches on August 27 of 2014. A couple of details have been adjusted and corrected. Also, the ceramic line-up has been added to the table. The original article appeared first on the German version of WatchTime, written by Gisbert L. Brunner.

Hot Topics
Introducing: The Omega Speedmaster Super Racing With Spirate System
165 comments
Design Vs. Specs — Which Is More Important To You When Buying A Watch?
87 comments
New Release: The Limited-Edition Seiko Prospex SLA067J1 Diver
58 comments
My Predictions For New Omega Speedmasters In 2023
57 comments
The Time To Buy Is Now: How The Current Economic Climate Influences Watch Buying And How You Should React
51 comments
Popular
You Asked Us: Rolex Submariner vs Omega Seamaster
Robert-Jan Broer
25
Top 10 Best Watch Bracelets
Robert-Jan Broer
61
#TBT Seiko 7549 Golden Tuna – In Love With a Quartz Diver
Michael Stockton
10