And yet, it flew right under everyone's eyes...
Ben Hodges
comments 32
Share

Last year, Breitling launched the new Super AVI collection in five editions, each paying homage to a legendary aircraft. Appropriately, the launch took place at the National Aviation Education Center in Dallas. And even more fittingly, expert pilots wore the namesake models in flight to reflect their vintage planes. Breitling sure likes to amp up the theatrics! Following the flashy unveiling, I spent some time with the Super AVI and came to realize something: Breitling has the most legible, mechanical chronograph GMT on the market. I recognize this epiphany reflects a niche within a niche, but I’ve got to give credit where credit is due. In this article, I delve into what I mean by its legibility and weigh up some options out there.

Now is a good time to describe wristwatch legibility. Firstly, watchmaking is not the only industry where we discuss a product’s readability. From the instrument cluster on a motor vehicle to the departure time board at a transit station, or even the webpage you are reading right now. Along with watches, these examples must convey accurate information and be hastily interpreted by the squishy biological creature who needs it at the other end. Otherwise, illegible displays can derail all the engineering might in the world.

For watches, there are a few key things to look for. They include appropriately sized hands that reach the proportional markers, striking contrast, and bonus points for color-coded indications. Two- and three-handed watches can easily meet these requirements. Challenges arise, however, when you start adding date apertures, chronograph sub-dials, and a GMT. When a watch includes these three complications and still keeps it clear, that’s what makes me sit up and take notice. And that’s what inspired me to highlight this new piece from Breitling. 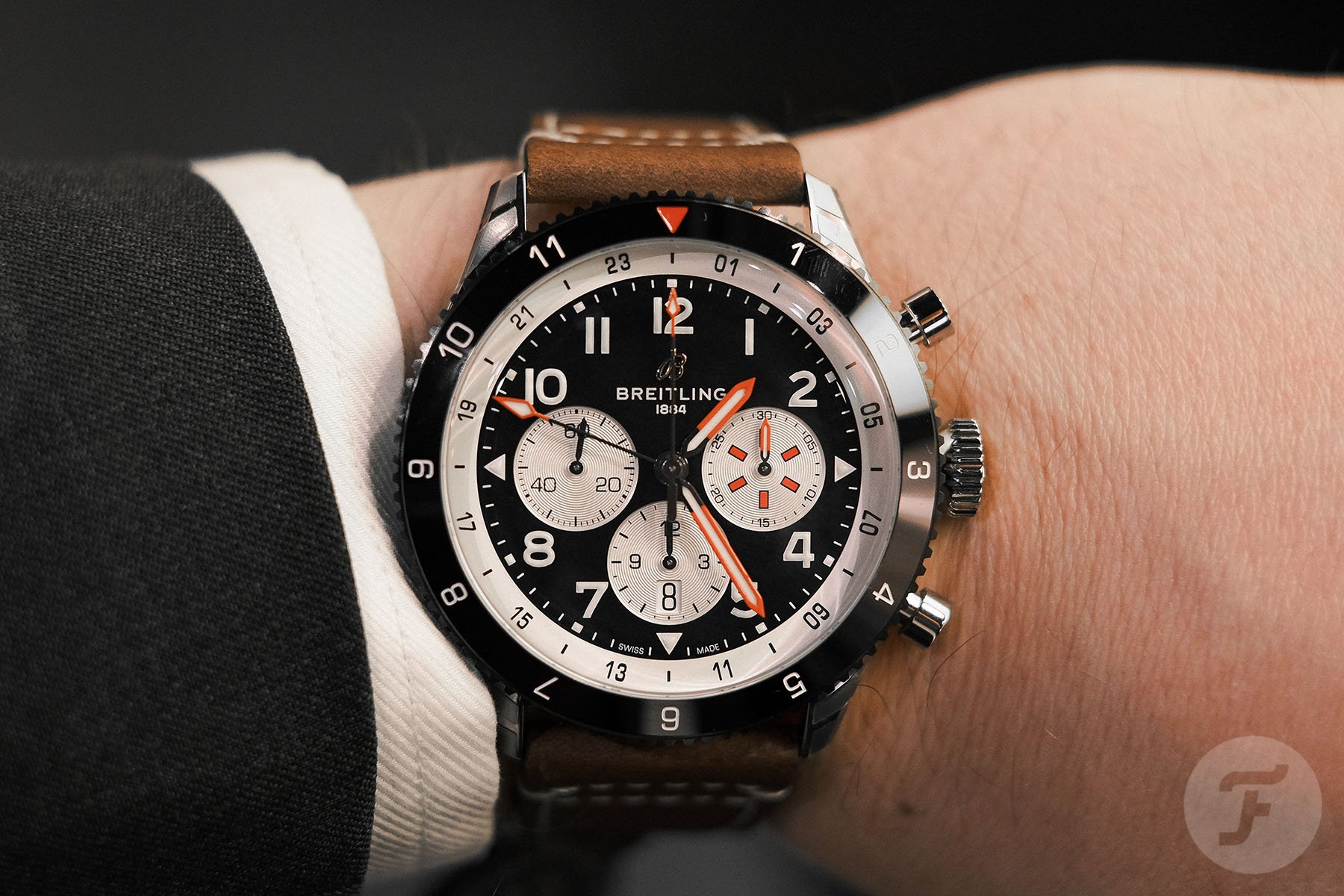 The Super AVI bases itself on the 1953 reference 765 but takes it up a notch with a 46mm case and various colors and materials. Thor already delivered the details on this range, especially on the increase in size from 41mm in the 2020 re-edition to 46mm in the 2021 Super AVI. The “Super” in the name explains the expansion, but still, on paper, the Super AVI sounds unwieldy. Indeed, Thor got hung up on the size and, based solely on the press pictures, I had done so as well. However, what struck me when seeing the Super AVI in person was that 46mm wasn’t clunky or awkward at all. I felt it suited my wrist quite well, albeit it was sitting right at my upper limits for diameter.

My grandfather flew as an RAF navigator on the de Havilland Mosquito in 1945.

The second aspect that got my attention was how clear each indication was. I tried the P-51 Mustang and Curtiss Warhawk editions, but my main attraction was the Mosquito. That was mostly because my grandfather flew as an RAF navigator on the de Havilland Mosquito in 1945. But I soon realized the difference that the materials made on the legibility. All the Super AVI models have a polished metal bezel (either steel or gold), except for the Mosquito, which has a black ceramic bezel. The Mosquito costs €100 more than its steel counterparts — €9,700 versus €9,600 — but has a massive gain in readability. Working from the outside in, the Mosquito’s black ceramic bezel has white 12-hour numerals and a bright red triangle. Going a step further, the 24-hour ring is a contrasting bright silver with black markers for the even indices and numerals for the odds. 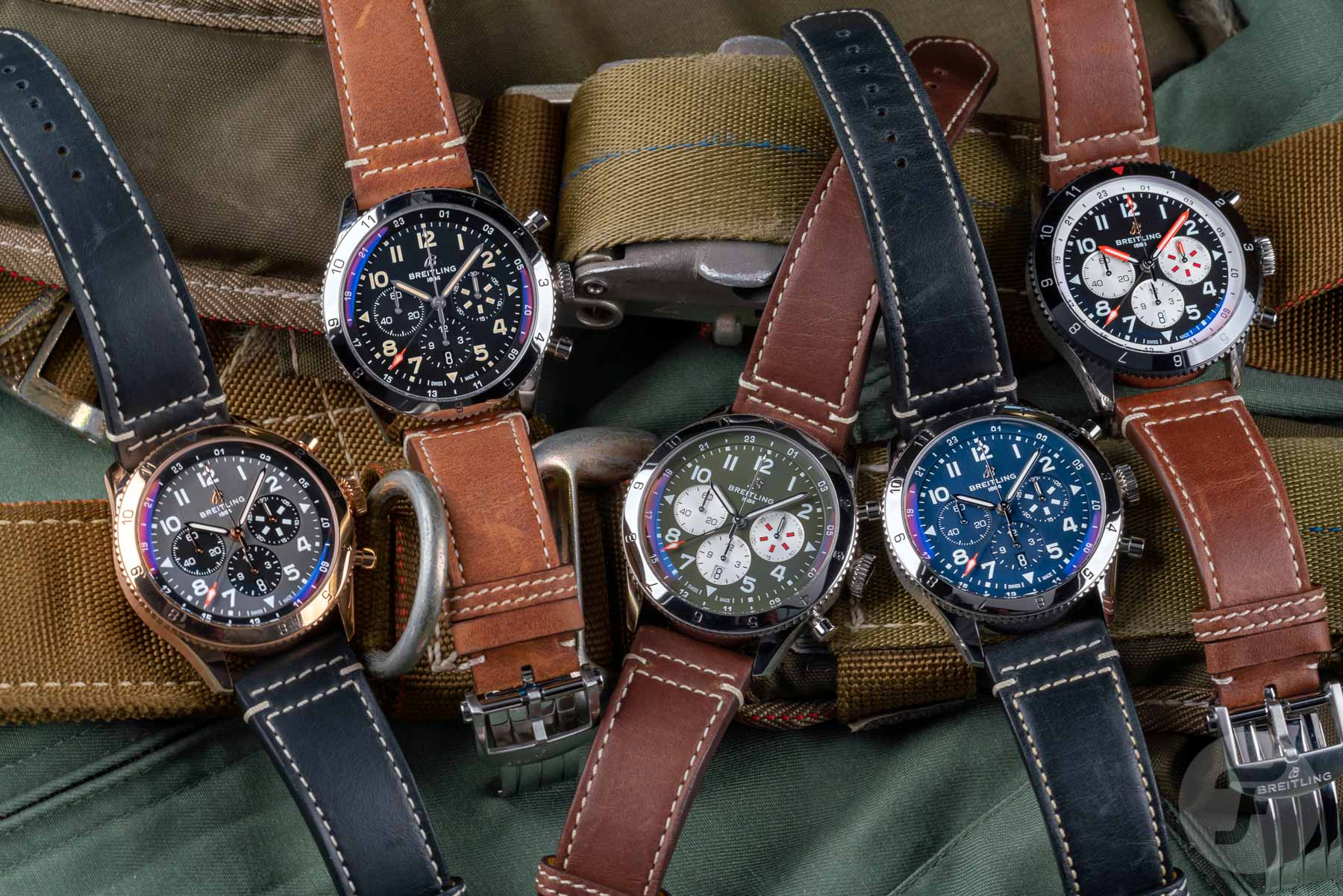 A chronograph GMT at a glance

Already, the dial layout has a pattern emerging as the central sector has a black backdrop. The main dial features bold Arabic numerals with 3D luminescence and correlating square markers, except for 3, 6, and 9 o’clock, where triangles sit — no chewed-up digits here! Switching it up again are the reverse-panda sub-dials, finished with a silver circular grain. The black printing on the sub-dials indicates the elapsed hours and minutes, as well as the running seconds. What’s noticeable on the sub-dials is that the font varies in weight and frequency to indicate the criticality of its function. For instance, to help track the minute totalizer, the markers appear in five-minute increments with a bright red rectangle to break up the sectors. Thus at a glance, it’s far easier to interpret whether nine or eleven minutes have passed, for example. Simply note which side of the rectangle the hand is on. 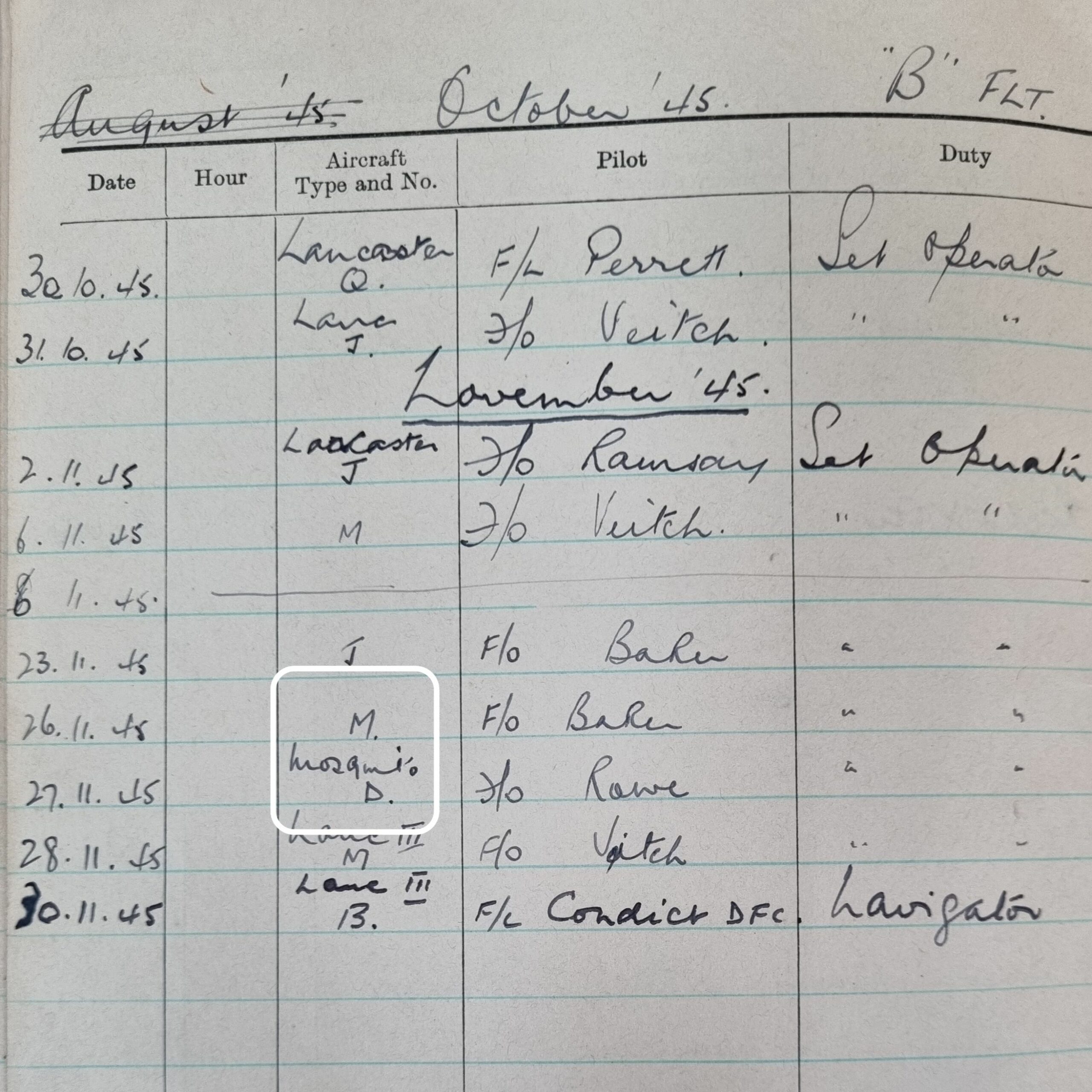 Speaking of hands, the sub-dial nearest the crown also features a red-tipped pointer, in contrast to the polished hands of the running seconds and hour totalizer. This corresponds with the central chronograph second hand, which is mainly polished with a red arrow tip. The other sub-dials are helpful but less critical than the chronograph seconds and minutes. Perhaps the only slightly tucked-away element is the date window. Nestled within the 6 o’clock sub-dial, thankfully, it doesn’t spoil the symmetry. 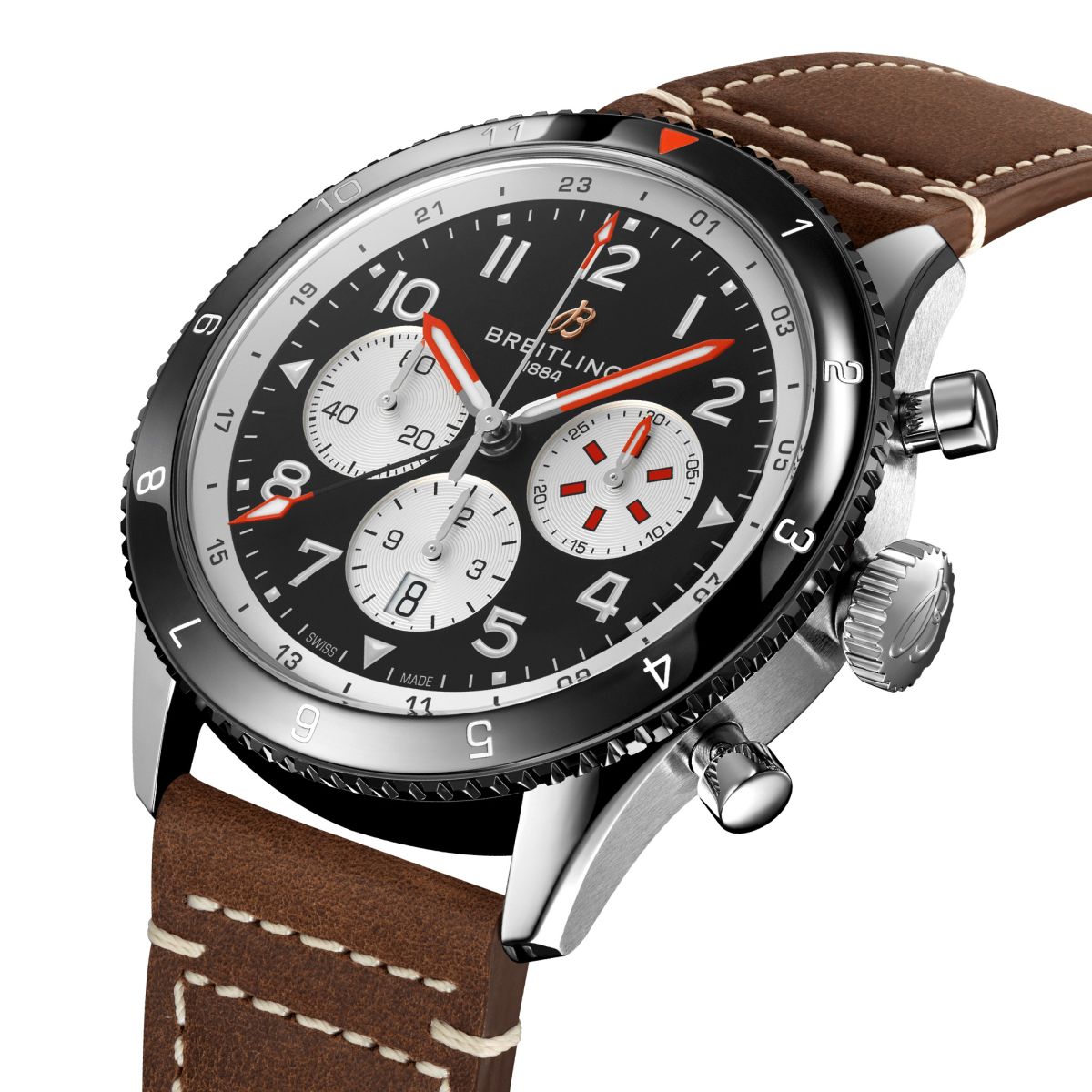 Moving on to the central time-telling hands, we see they are also heavily covered in a striking red coating. Other models in the range elect for polished hands, but the matte texture and color of the Mosquito’s hands allows them to stay visible no matter the lighting. To top it off, the elongated GMT hand has a darker undercoat with red covering the arrow tip and just touching the 24-hour scale. 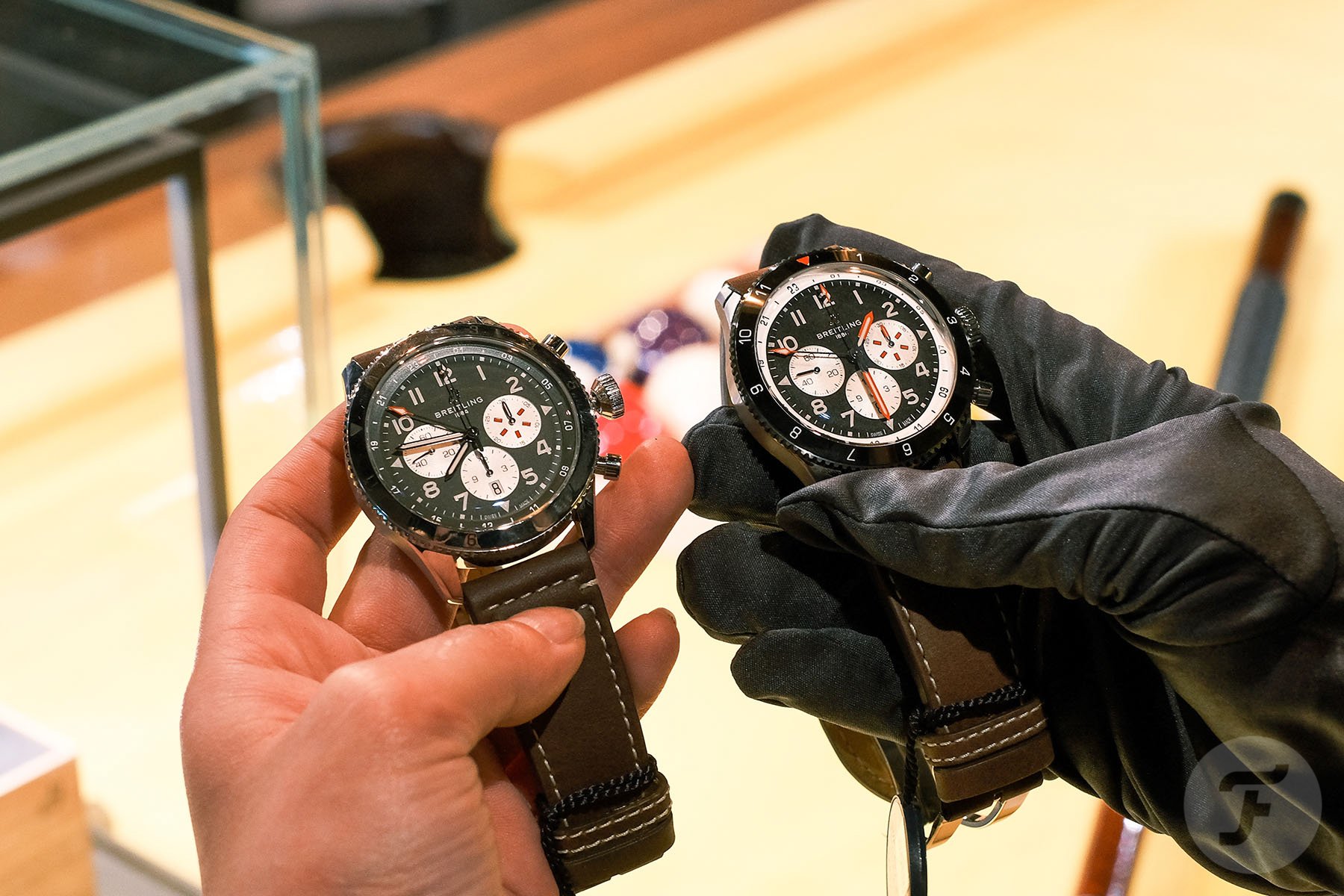 With liberal use of alternating sectors, high-contrast black and silver, and flashes of red, the Breitling Super AVI Mosquito is the most legible chronograph GMT on the market. It’s thoroughly well designed and considered, and possibly thanks to its expansive 46mm case, the dial has ample room to breathe. To test my claim of its legibility, let’s take a look at competing watches in the category of sports chronograph GMTs. 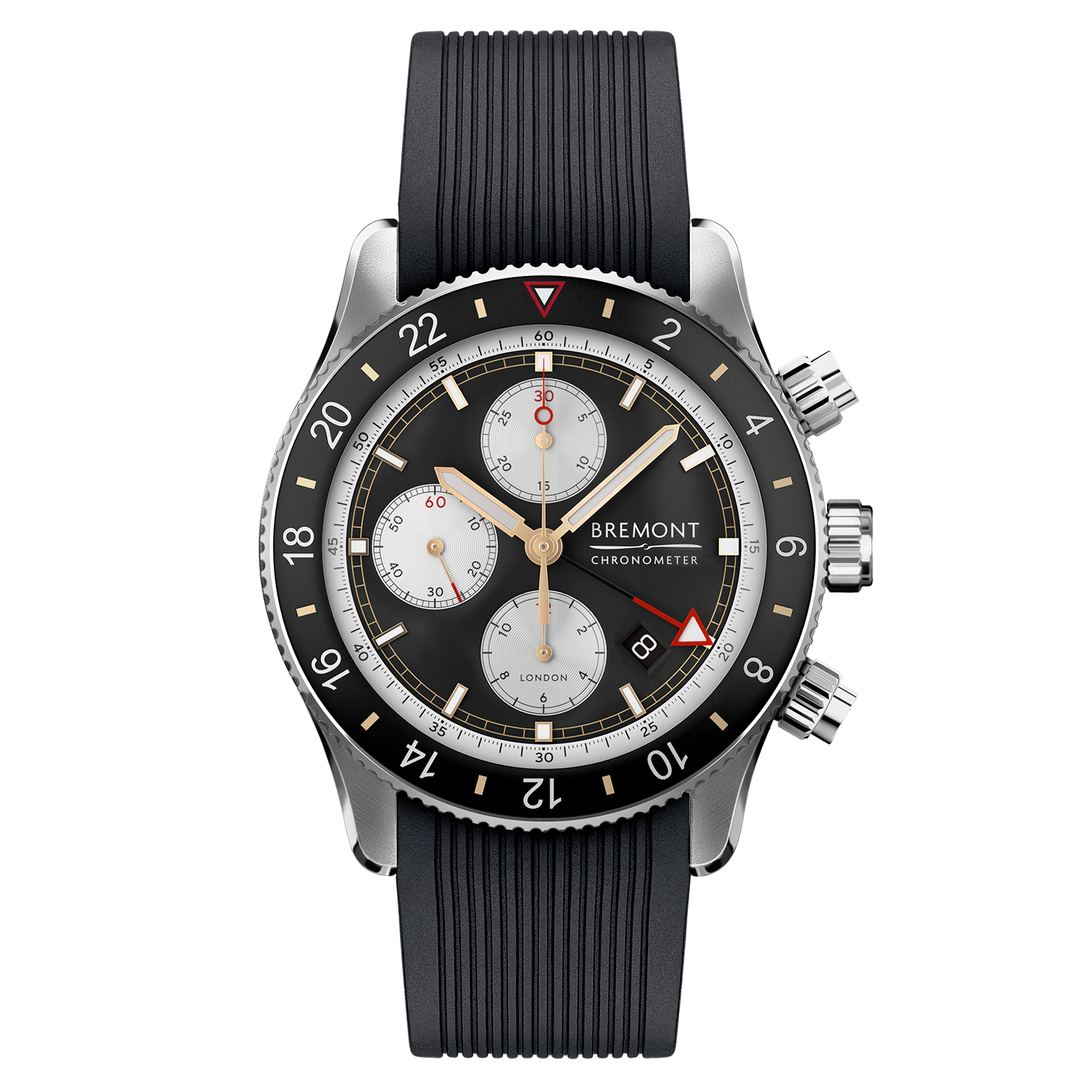 Admittedly, the Bremont Supermarine Chronograph has a similar alternating pattern of sectors in black and silver. However, this model suffers from the GMT function. The GMT hand only reaches the 60-minute scale. Strangely, there are also two scales for the minutes, while only the rotatable bezel has the 24-hour markings. In my view, it would’ve been better to replace the silver outer minute track with a fixed 24-hour scale. That way, the gilt railway minute track could be more pronounced. 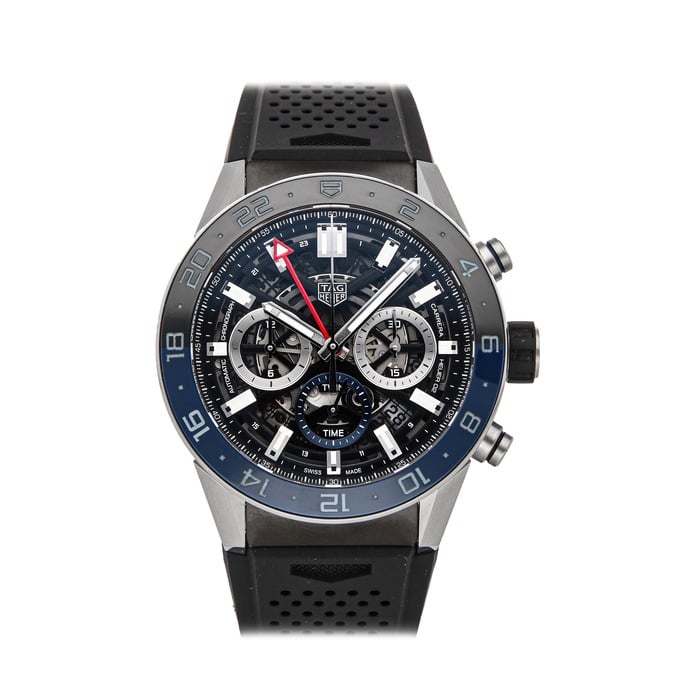 Where do I even start with the TAG Heuer‘s legibility? I suppose the obvious place is the dial’s skeletonization. It doesn’t necessarily hamper the indications. But it certainly adds to the visual confusion in locating each function’s appropriate hands and markers. Need I say more?

As with the Bremont and Breitling, the Seamaster GMT Chronograph has a red coating on the hands to delineate functions. However, the dark background for each section, even the rehaut, doesn’t break up the sea of black. This means the 24-hour scale blends in rather than stands out. 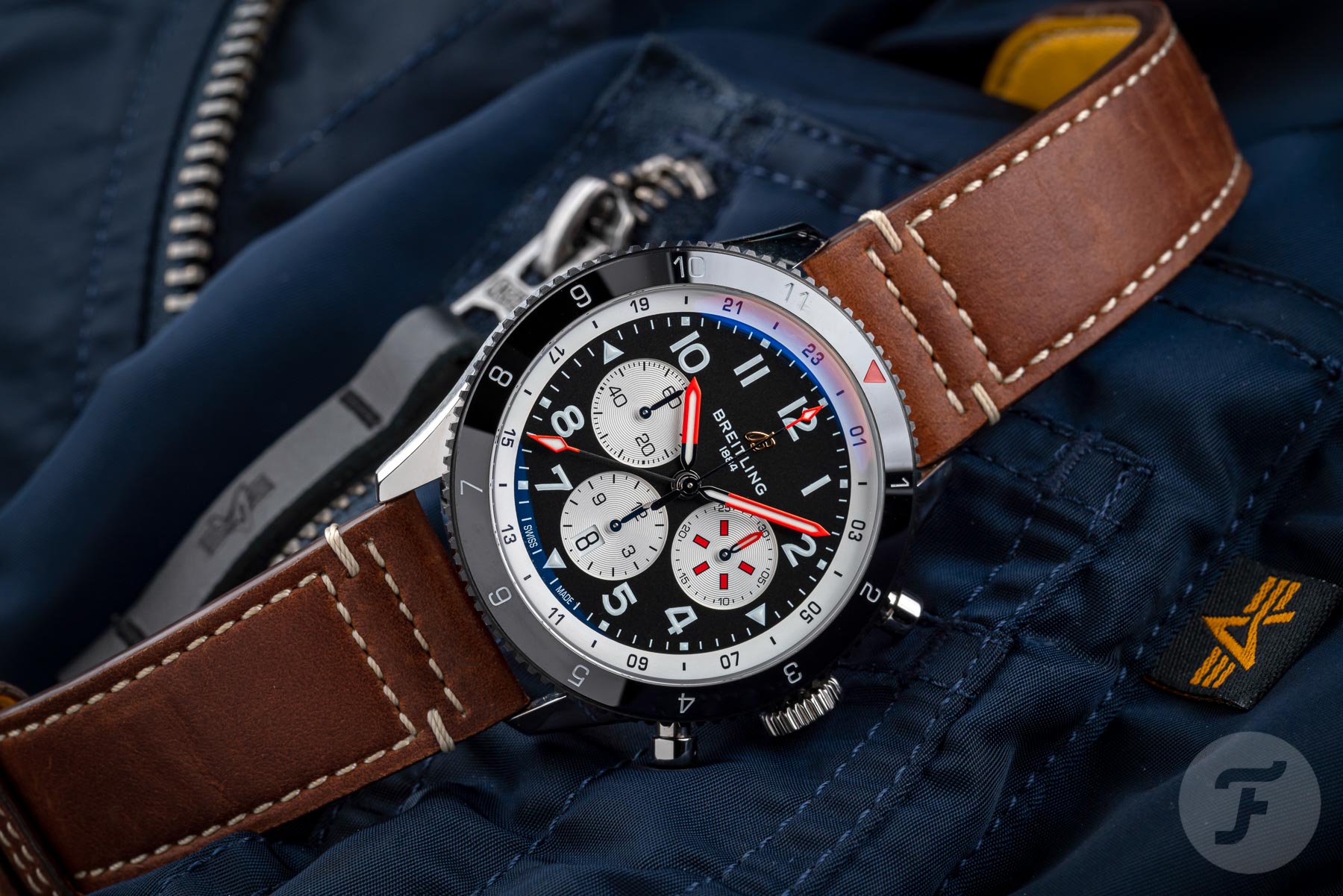 Of course, legibility is subjective. But even so, the Breitling Super AVI Mosquito is a top-scoring chronograph GMT that is perfectly suited to the cockpit. Can you think of any other chronograph GMT watches that compete with the Breitling? Let me know in the comments.