The Rolex Explorer II is a bit of a fan favorite. This is especially true of the reference 16570, which is part of the popular five-digit generation of Rolex sports watches. Many — including me — admire it for its honest, tool-like qualities. It is from a time before everything went maxi and shiny. But today, I do not intend to wax poetic about it. Today, I want to outline the different versions that exist. If you are considering the 16570, you have a couple of choices to make. Let’s have a closer look.

With the 16570’s production spanning 1989–2011, it is one of the longer-lasting references in Rolex history. Early models still feature some distinctly “vintage” characteristics. Later ones can feel thoroughly modern. Some variations are particularly collectible and valued accordingly. Across the board, however, it really is just a matter of taste. The subtle differences will speak to different people in different ways.

The first choice you face is pretty obvious: will you go “polar” (white) or black? The black dial comes with white gold hands and applied indices. The polar version does too, but they are enameled in black for legibility against the white dial. The white dial and blackened hands are more atypical for Rolex and quite striking. This has resulted in slightly higher monetary values for the polar Explorer II in comparison to the black.

I think the black version is a little under-appreciated in that sense. What you lose in quirkiness, you gain in subdued versatility. If you want to get that one perfect watch, I think the black 16570 might serve you better.

Either way, you cannot really go wrong. I would recommend trying to find a dealer that has both on display. More than you can see in any pictures online, the whole vibe of the watch changes with the dial color. In my case, I went to buy a polar and left with a black version upon handling them side by side. I took pictures of both, and I still prefer the polar in the pictures. In real life, I leaned more toward the black one. Consider yourself warned. 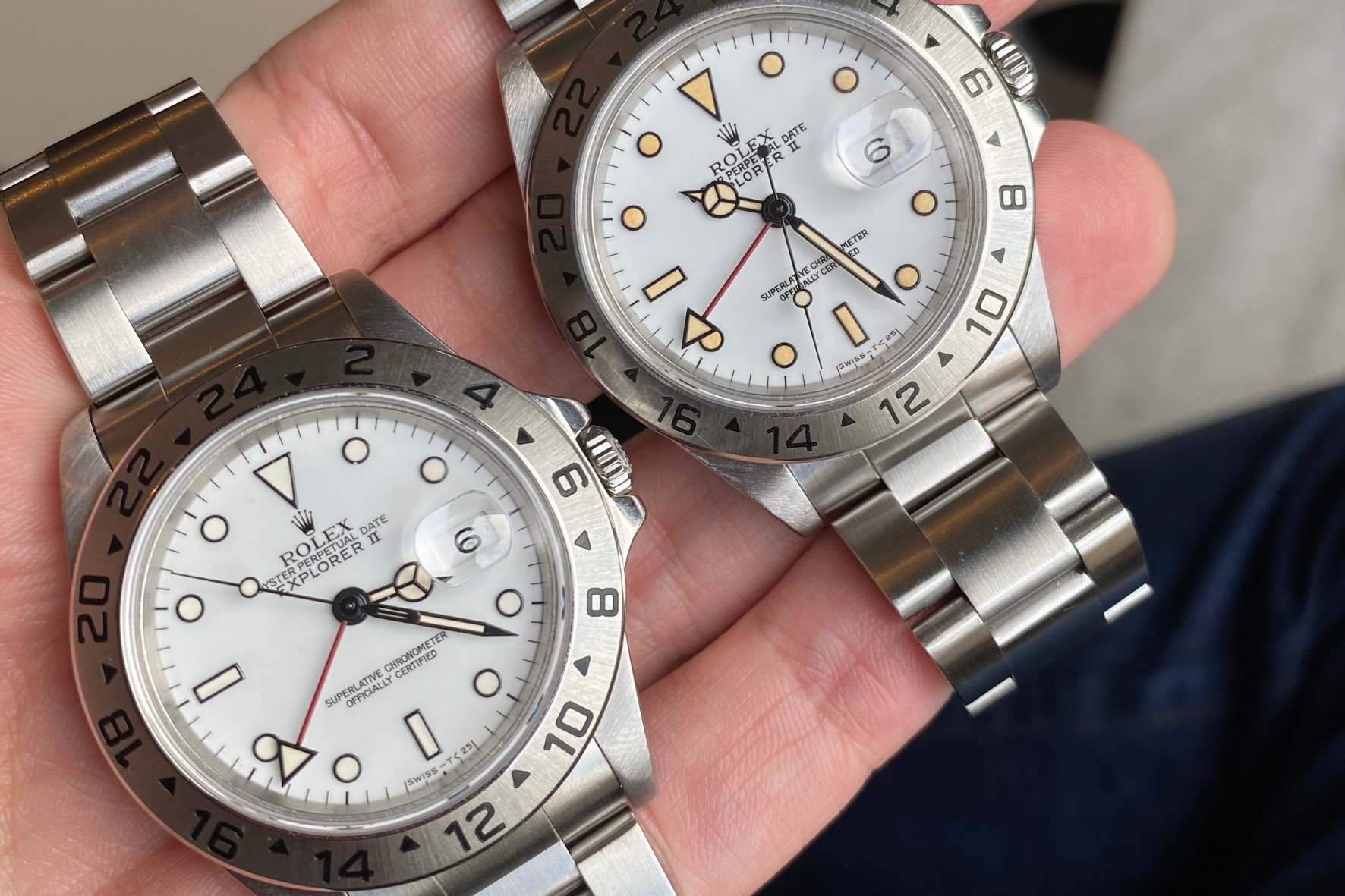 As you may have guessed from the production run (1989–2011), the 16570 went through three different lume eras. The first generation featured tritium. As you likely know, tritium has the propensity to change color over time. You may find examples that have turned beige, yellow, or brownish. These are highly desirable in the eyes of collectors. The aged tritium adds warmth and character to an otherwise rather clinical aesthetic. Tritium dials are marked “SWISS – T < 25” below the index at 6 o’clock. 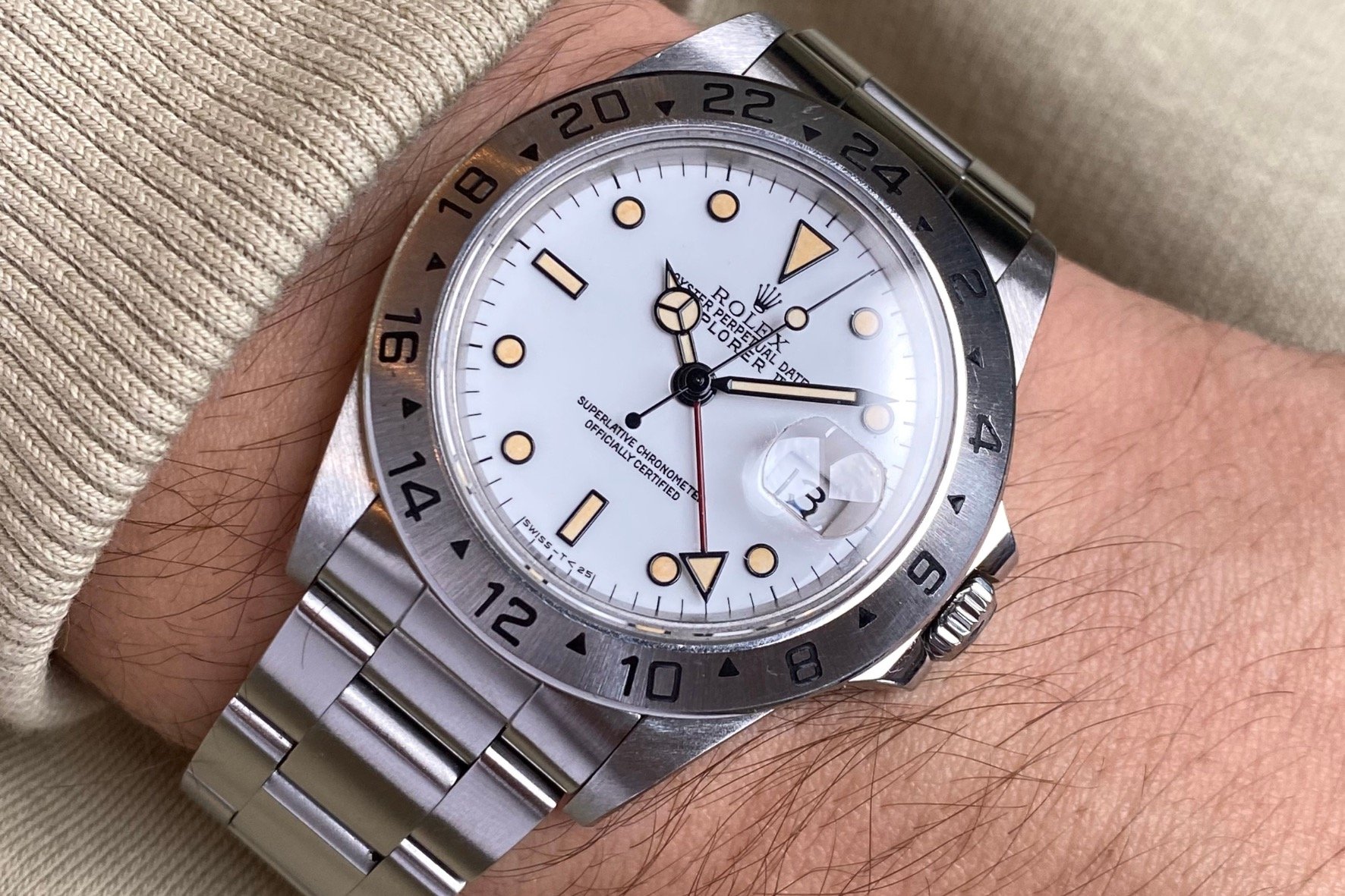 You may have come across the term “Chicchi di mais” while browsing 16570s. This is Italian for “corn kernels”, and it refers to particularly yellow tritium. You will pay a premium for examples like this as they are rare and considered highly collectible. Polar tritium dials have a glossier finish than later (Super-)LumiNova ones. They are sometimes referred to as “porcelain” dials for their resemblance to the material. The term has not really caught on yet as it has in the Datejust and Daytona universes. The black dial of the 16570 always remained glossy. 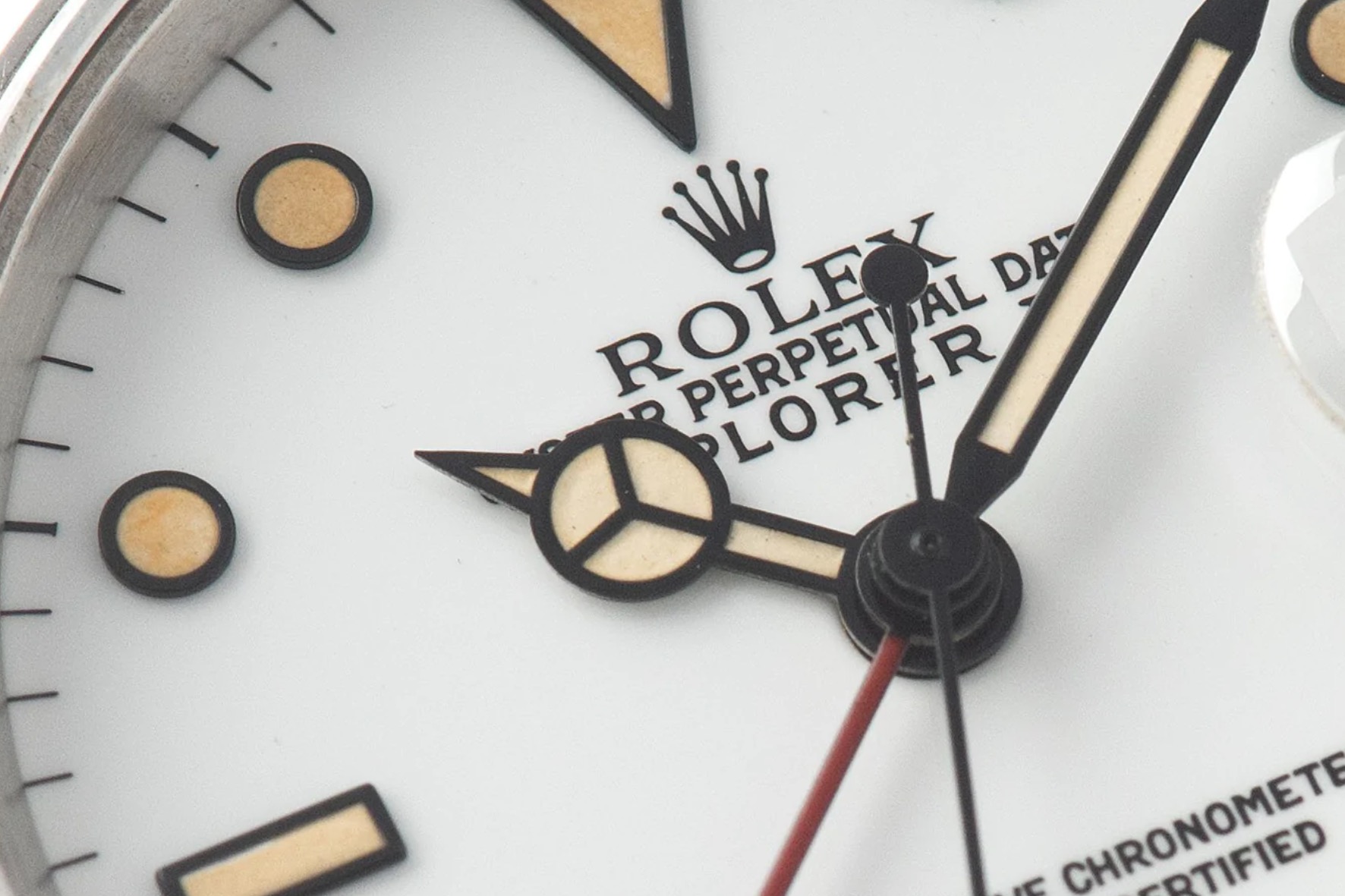 Rolex switched to the color-stable, non-fading, and non-radioactive LumiNova in 1998. Dials with LumiNova are marked “Swiss” below the index at 6 o’clock. These are the so-called “Swiss only” 16570s. Only a year later — in 1999 — LumiNova made way for Super-LumiNova. The dials would be marked “Swiss Made” from then on. Note that the “Super” denotes lume produced in Switzerland rather than Japan. 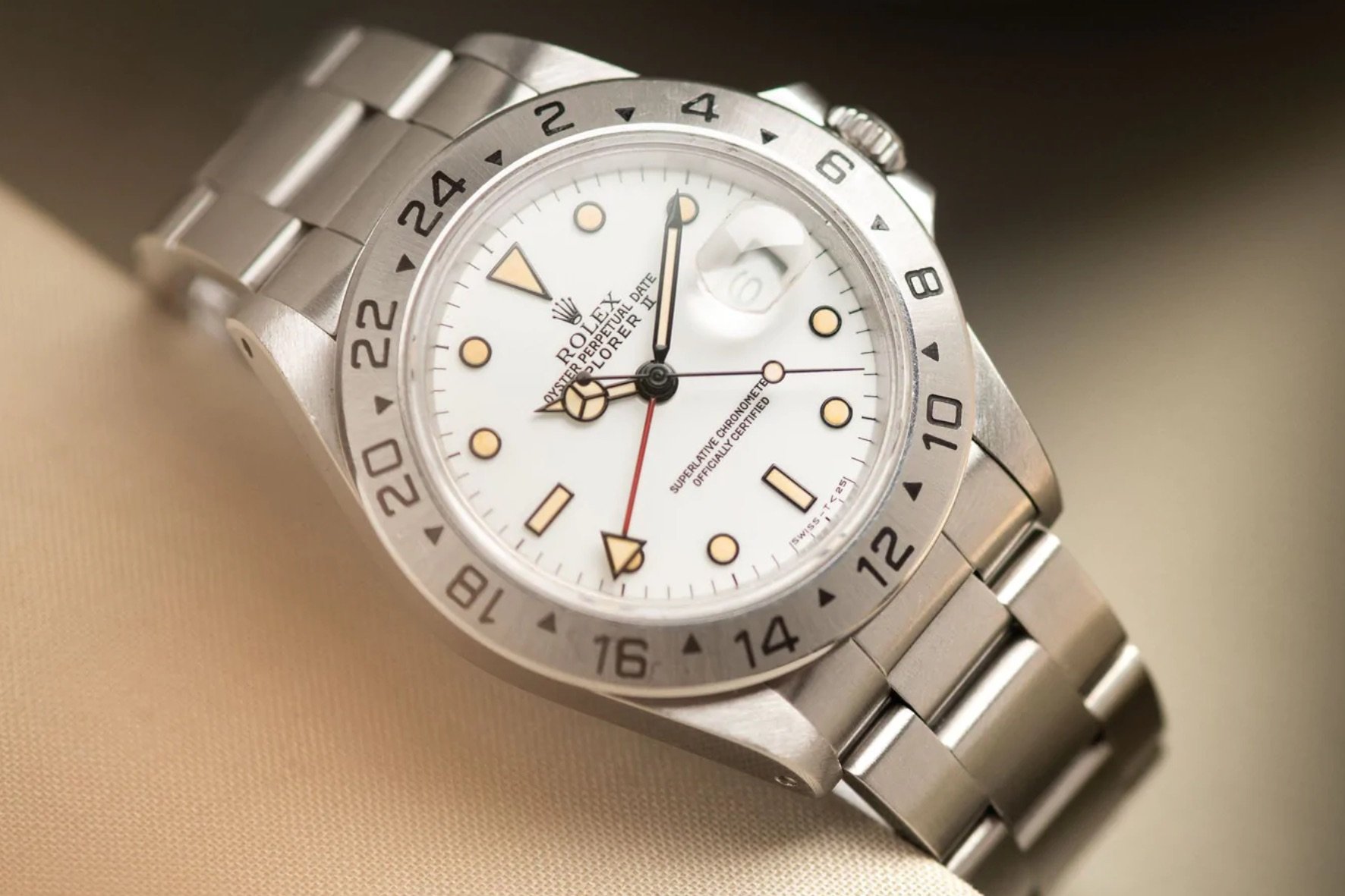 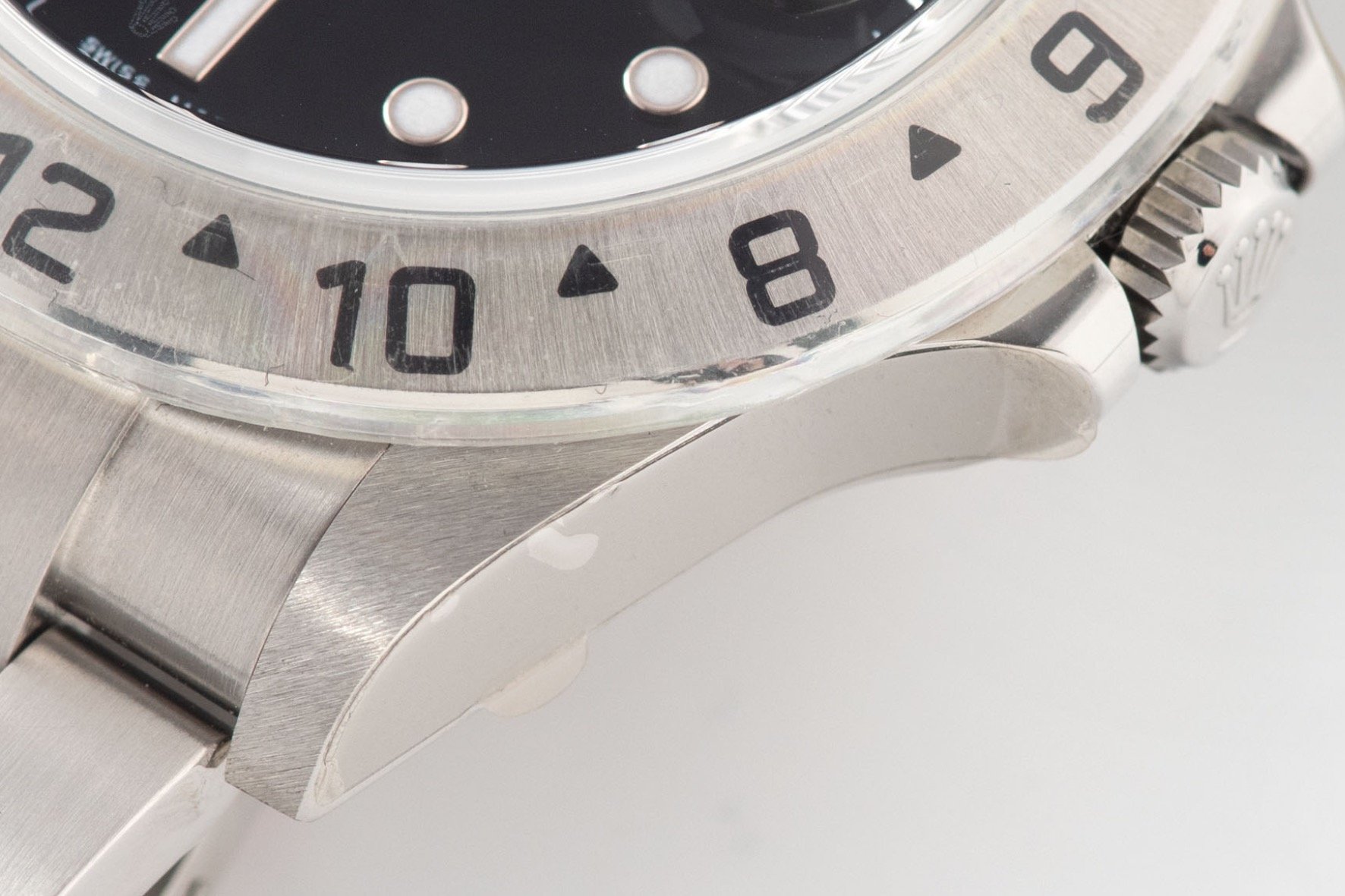 The solid end links on the Oyster bracelet radically change the feel of your 16570. They really make the watch feel much more modern and less rattly. At the same time, being male end links, they do add to the overall length of the watch. If you have a smaller wrist, the older female end links might provide you with a better fit. On my 17cm (6.7″) wrist, both work just fine. If you prefer a more vintage look and feel, the folded end links are the way to go. It is also good to know that pre-1998 Explorer II 16570 bracelets come without a flip-lock on the clasp. 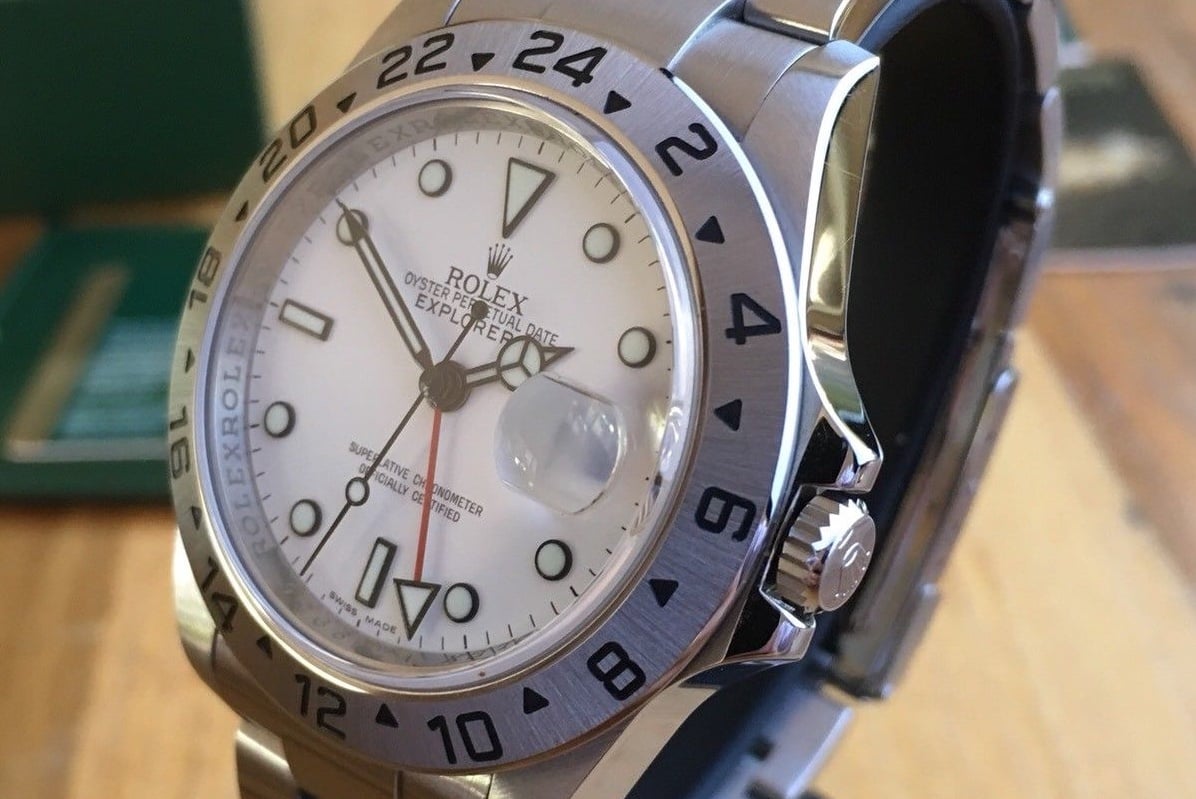 No more shaky hands from 2007 onwards

Up until 2007, all versions of the 16570 were fitted with the Rolex caliber 3185. This is a rock-solid flyer (or “true”) GMT movement with one little quirk — a shaky GMT hand. When you set the time, you will see the GMT hand wobble a bit. This does not harm the watch at all, but it looks a little odd. And so, of course, Rolex would remedy it sooner or later.

In 2007, the brand introduced the new caliber 3186 to the Explorer II. With it, Rolex fixed the wobble and added a Parachrom hairspring for boosted resistance to magnetism, temperature changes, and shocks. The caliber update would be accompanied by the use of a laser-etched rehaut around the dial.

Of course, this last generation of the 16570 always came with the non-drilled case and solid end links on the Oyster bracelet. 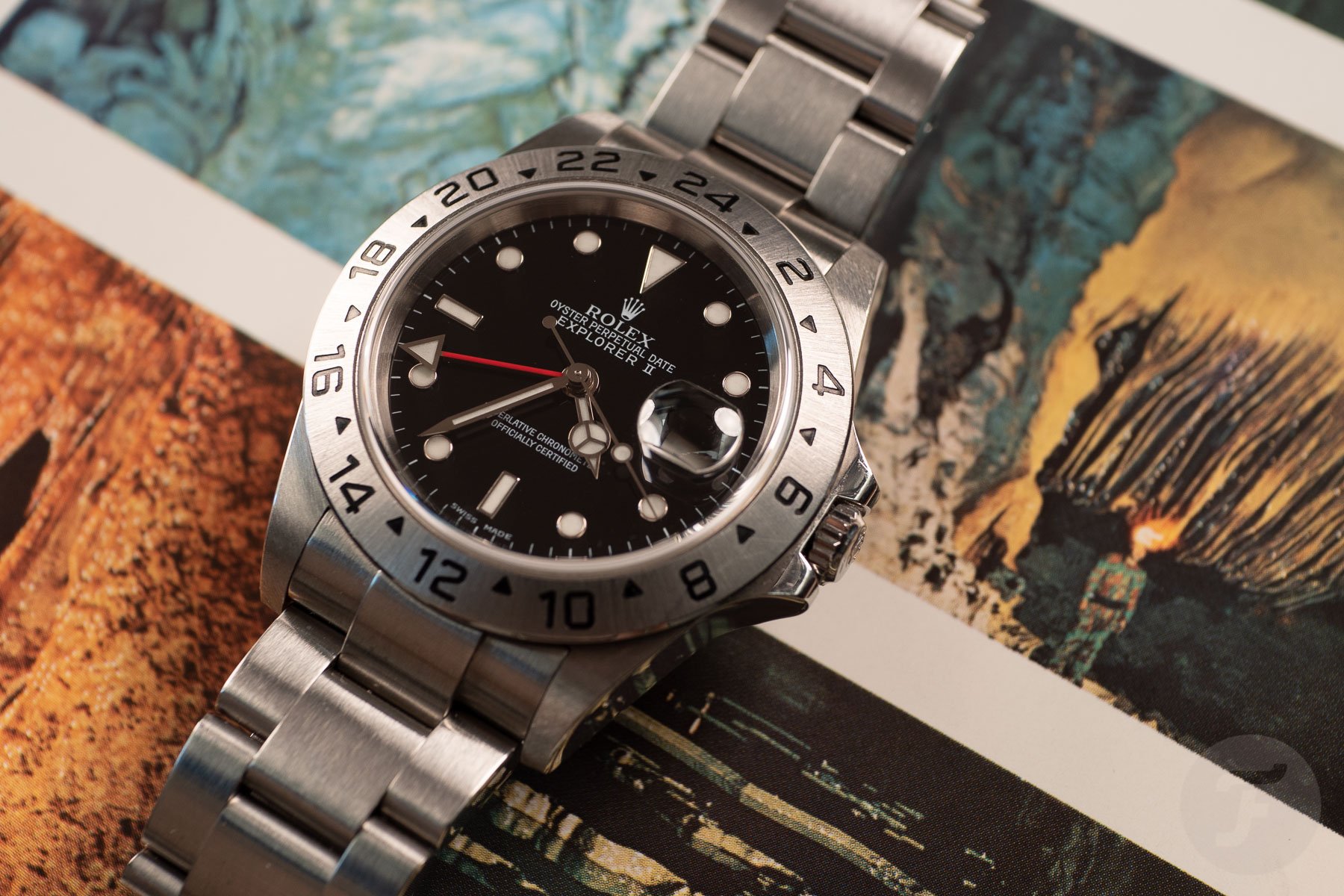 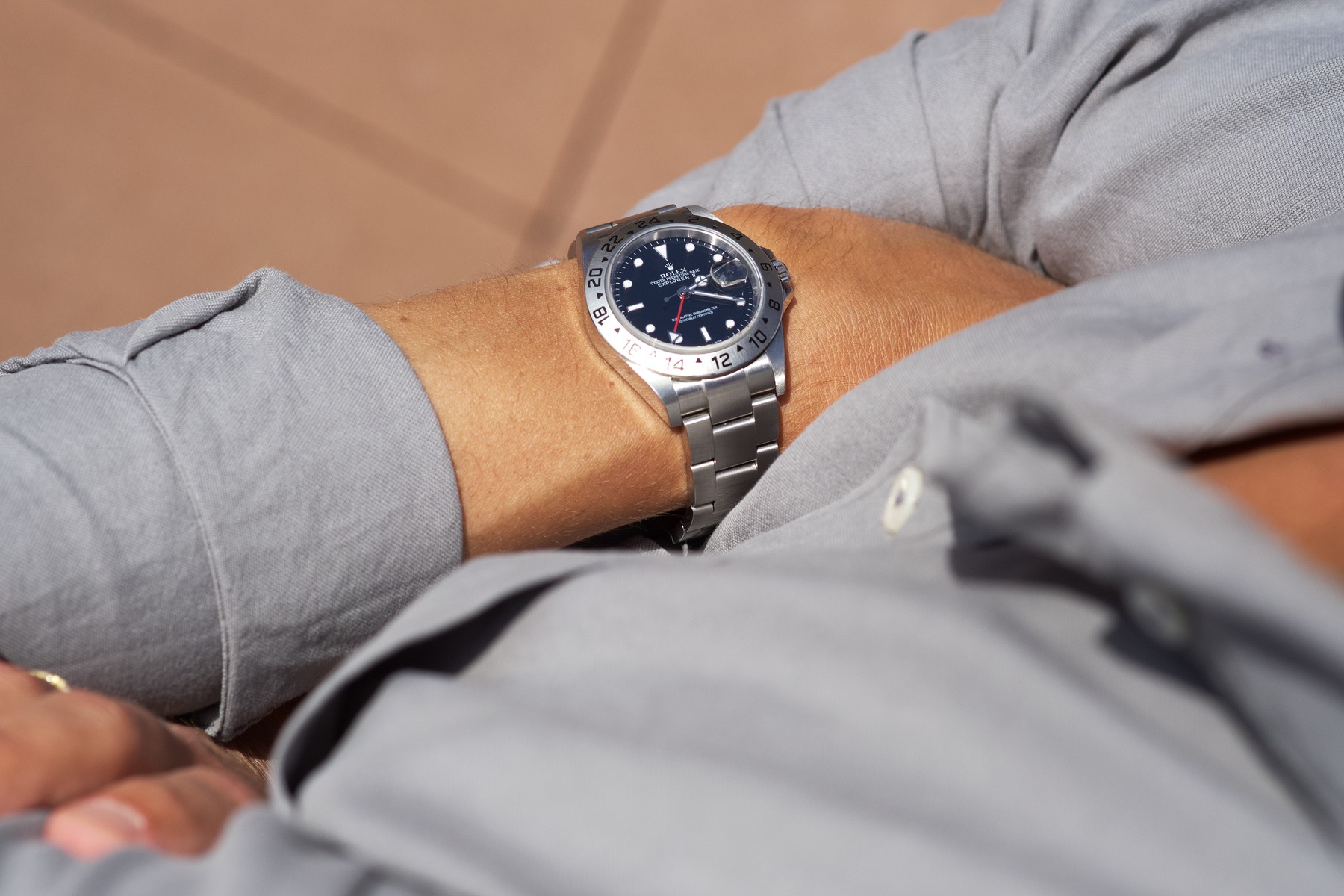 A lot of the above comes down to personal preference. It might also depend on what watches you already own and what role the 16570 would play in your collection. As a “one-watch collection” for daily wear, a post-2005 black version might work best. As part of a collection of interesting Rolex watches, an early “Chicchi di mais” example might hit the spot.

In all honesty, all 16570s make for great daily drivers. Earlier examples are still considered modern Rolex. And if you look after them, they will outlast you. In daily life, however, you may attribute value to functioning lume or a more solid-feeling bracelet. Again, that is a personal consideration. I opted for a black example from 2004.

I was looking for a more modern partner to my 1967 Datejust ref. 1601, so solid end links and Super-LumiNova were desirable to me. I dislike the look of the etched rehaut, so I had to look for a pre-2007 sample. With those boundaries set, the choice was easy. Of course, availability, affordability, condition, correctness, and set content all come into play, but that is beyond the scope of this article.

So there you have it — the different generations of Rolex Explorer II ref. 16570. Which would be your pick? Share it in the comments down below.