Casio Edifice Watches And The Magic Of Heat Gradation

A rainbow of intrigue hits bezels and beyond!
Rob Nudds
comments 5
Share

The deliberate and controlled oxidization of metal has been around in watchmaking for many, many years. In fact, the original technique has existed for centuries. It was devised as a way of protecting metal components from rust (which itself is a form of destructive oxidization). Watch hands were very commonly subjected to this treatment. This is because hands, given how thin and delicate they have to be, are particularly susceptible to rust. By heat treating, or “force oxidizing” the hands, a protective and aesthetically pleasing layer coats the base material. While blue is the most commonly seen color derived from this process, a whole gamut of hues can be achieved. With its Heat Gradation series of Edifice watches, Casio aims to exploit that.

In theory, the science behind forced oxidization is simple. It is pleasingly exact. If you heat steel (or titanium, for that matter) to a certain temperature, it will turn a certain color. That sounds simple, right? Yes, it is, as many things are in our industry, very simple on paper. Applying the wisdom of that science, however, takes a lot of skill and practice. 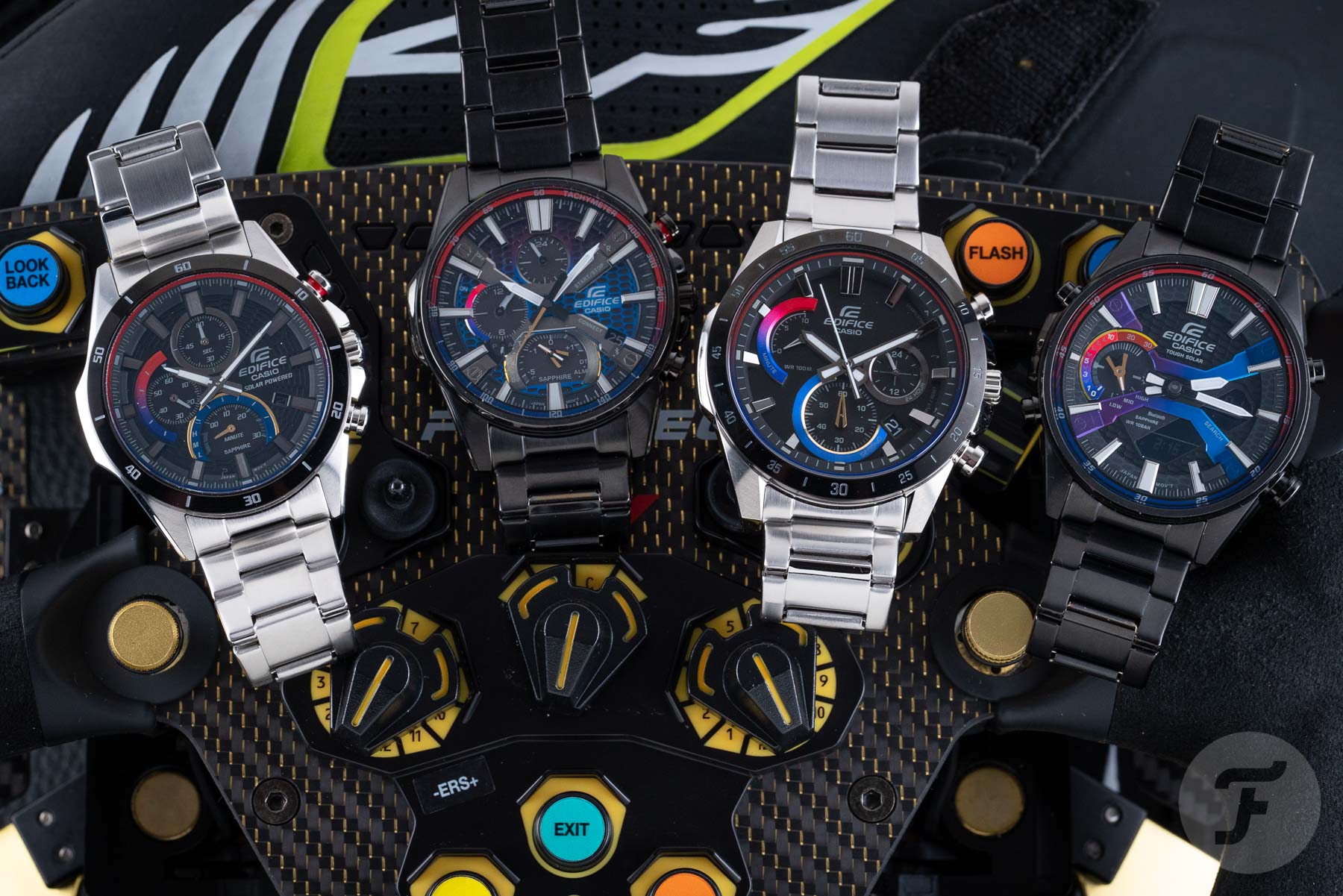 There are many techniques a watchmaker can use to blue watch components. Each of them, however, comes with its own foibles. Some watchmakers, myself included, prefer to heat a bed of brass filings, or swarf, to obtain an even distribution of heat throughout said bed before dropping the steel component onto it. If all goes well, the component will absorb the heat evenly, resulting in a balanced and unblemished blue coating.

Others prefer the use of bluing salts. When heated, blueing salts melt and form a liquid, which has an even temperature throughout. This makes it perfect for the effective oxidization of steel. For companies working on a much larger scale, this manual approach — which seems almost comically old-fashioned given its involvement of Bunsen burners, blowtorches, and small glass jars of mystical salts and pixie-dust swarf — makes no sense. Instead, these makers often blue components in an oven, which is subject to precise temperature regulation.

Heating steel to around 280° Celsius should get you a nice rich, indigo blue, just on the turn from a deep purple, which emerges around 270°. If you go beyond 280°, the blue will lighten to a cornflower shade. Below 270°, you will find brown tones (from around 250°–270°), and light straw (almost golden) hues from around 210°. What Casio has done here is mimic the range of color gradation often found on the titanium exhausts of high-performance sports cars and used it to decorate these four new Edifice models. 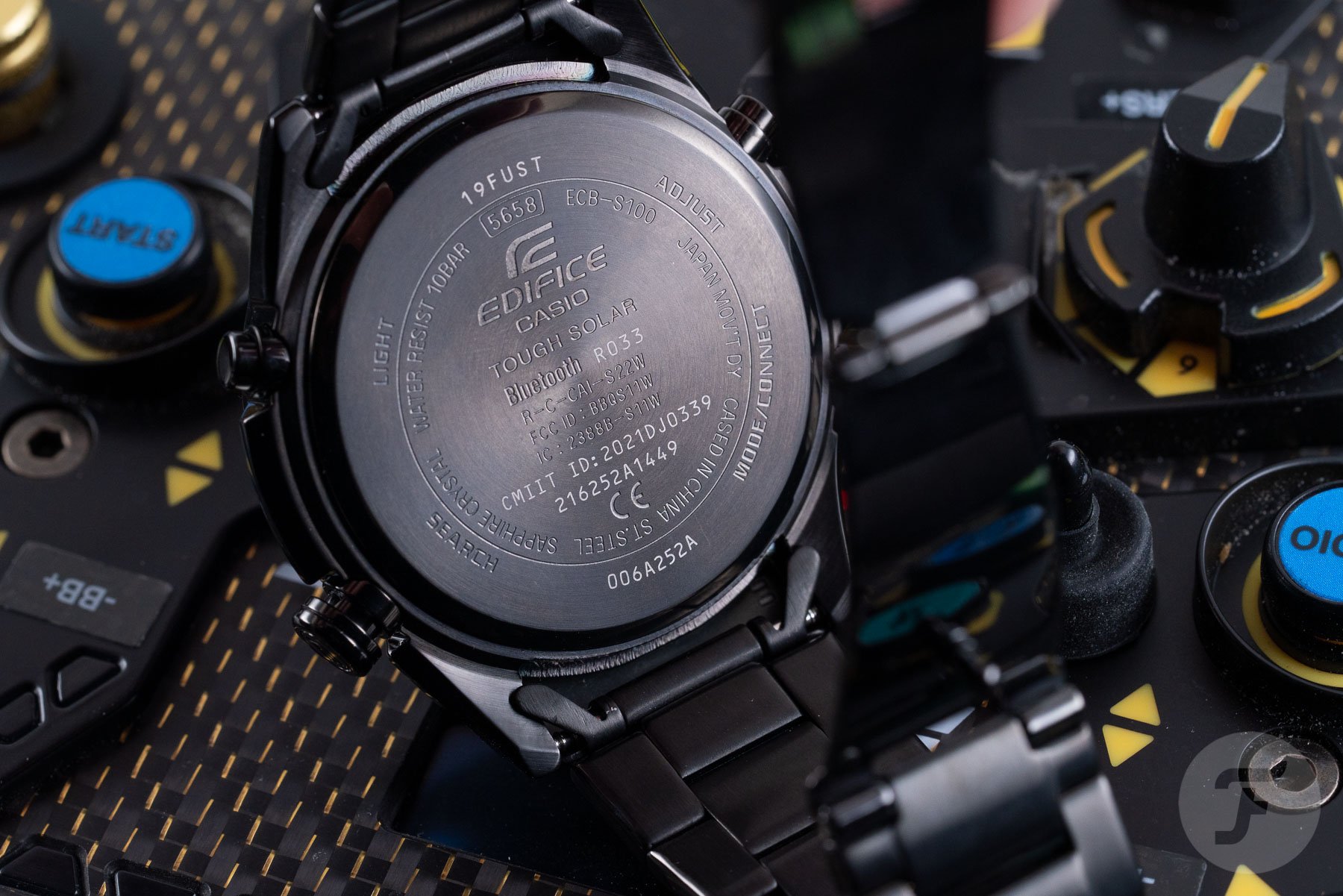 Does it work on watches?

Heat gradation is a funny thing. Aesthetically, it looks wild. It looks like it exists for decorative purposes only and could, perhaps in the same way as tie-dye T-shirts, be dismissed as something frivolous and “hippyish” if not understood. The truth is, however, intentional oxidization plays a key role in the long-term survival of essential components.

The temperatures to which one needs to heat titanium to achieve the colors that embellish this collection of dials are extreme. For example, to achieve any kind of red from a natural heating process, you’re looking at around 800°–900° Celsius. It’s unlikely to be as beautifully crisp and bright as the red used on these dials (normally having a bit more of a grayish tint to it), but the use of that color is a nod to the extremes to which Casio hopes these watches can stand up. 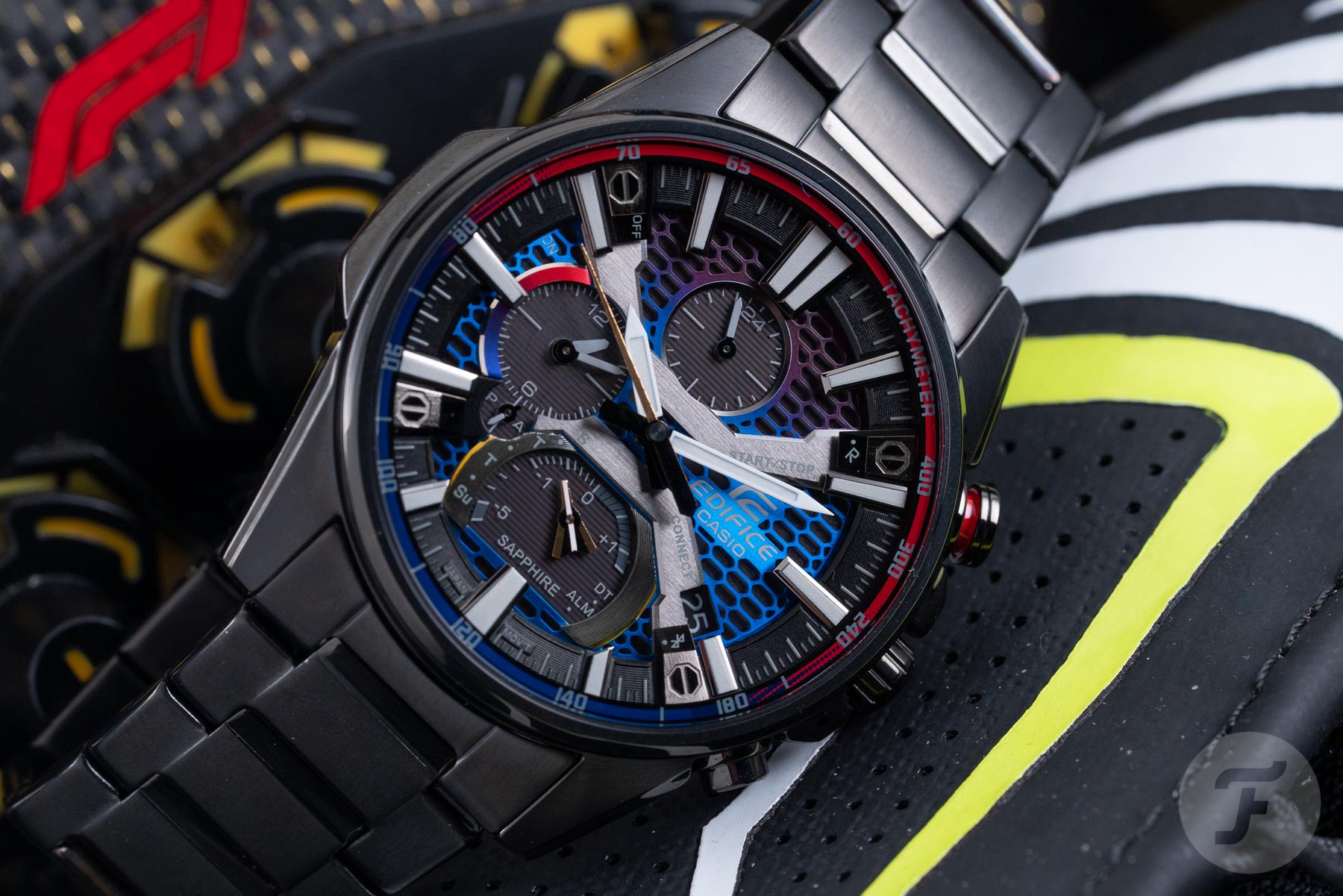 In this Casio capsule collection, there are four watches. All four have different pusher and dial setups but share some elements that repeat across the range. References EQB-1200HG-1A and ECB-S100HG-1A both feature “grill” dials. The latter, however, integrates a digital display, while the former sticks with an entirely analog readout. The grill of the EQB-1200HG-1A uses heat gradation, which makes it my favorite of the four. Here, the gradation appears very naturally integrated into the background of the design. However, the heat-graduated elements of the ECB-S100HG-1A leap out of the black grill background in a way I find distracting. 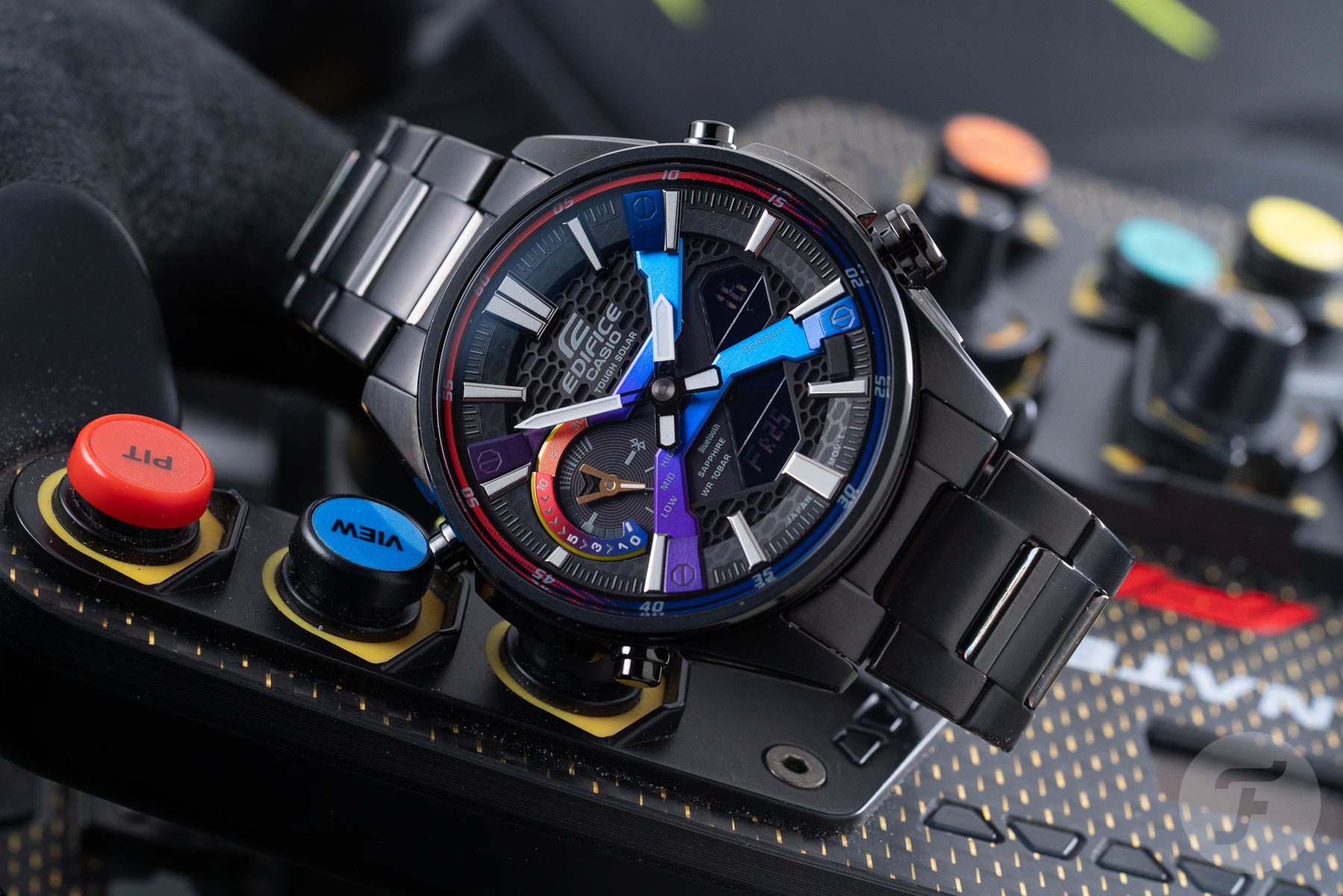 Always a nitpicker, I wish the movement and dial setup of the ECB-S100HG-1A had been meshed with the graduated grill of the EQB-1200HG-1A and presented in a stainless steel case (both of these models are blackened). 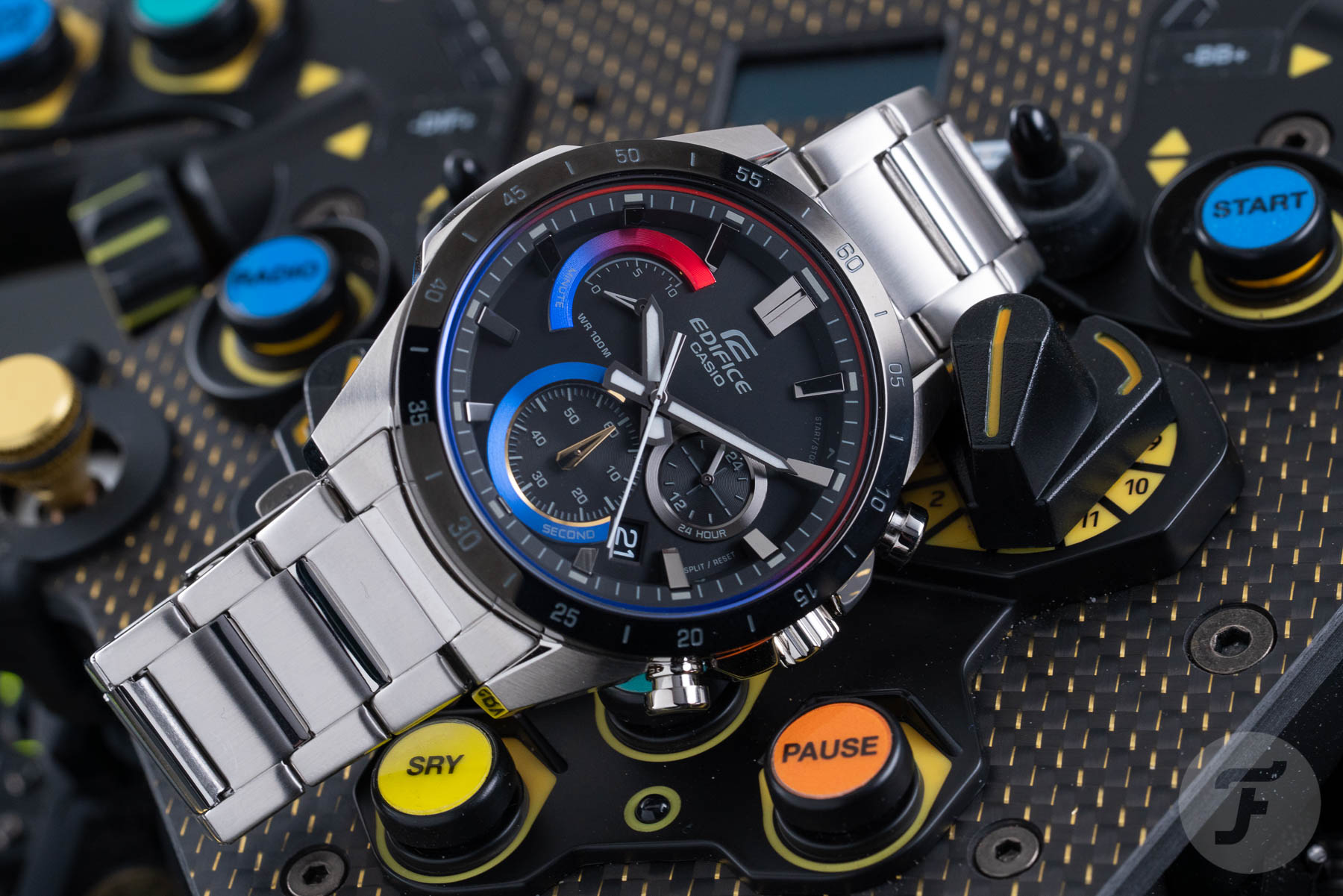 The other two references (references EFS-S610HG-1AV and EFR-573HG-1AV) are both in untreated stainless steel cases with black bezels. If you glance between the two, the differences, while obvious enough, are easy to overlook. They amount to a rearrangement of the sub-dials more than anything else. Reference EFR-573HG-1AV has an asymmetrical 3-6-9 layout, while reference EFS-S610HG-1AV goes for the 12-6-9 format (which I prefer in this instance). 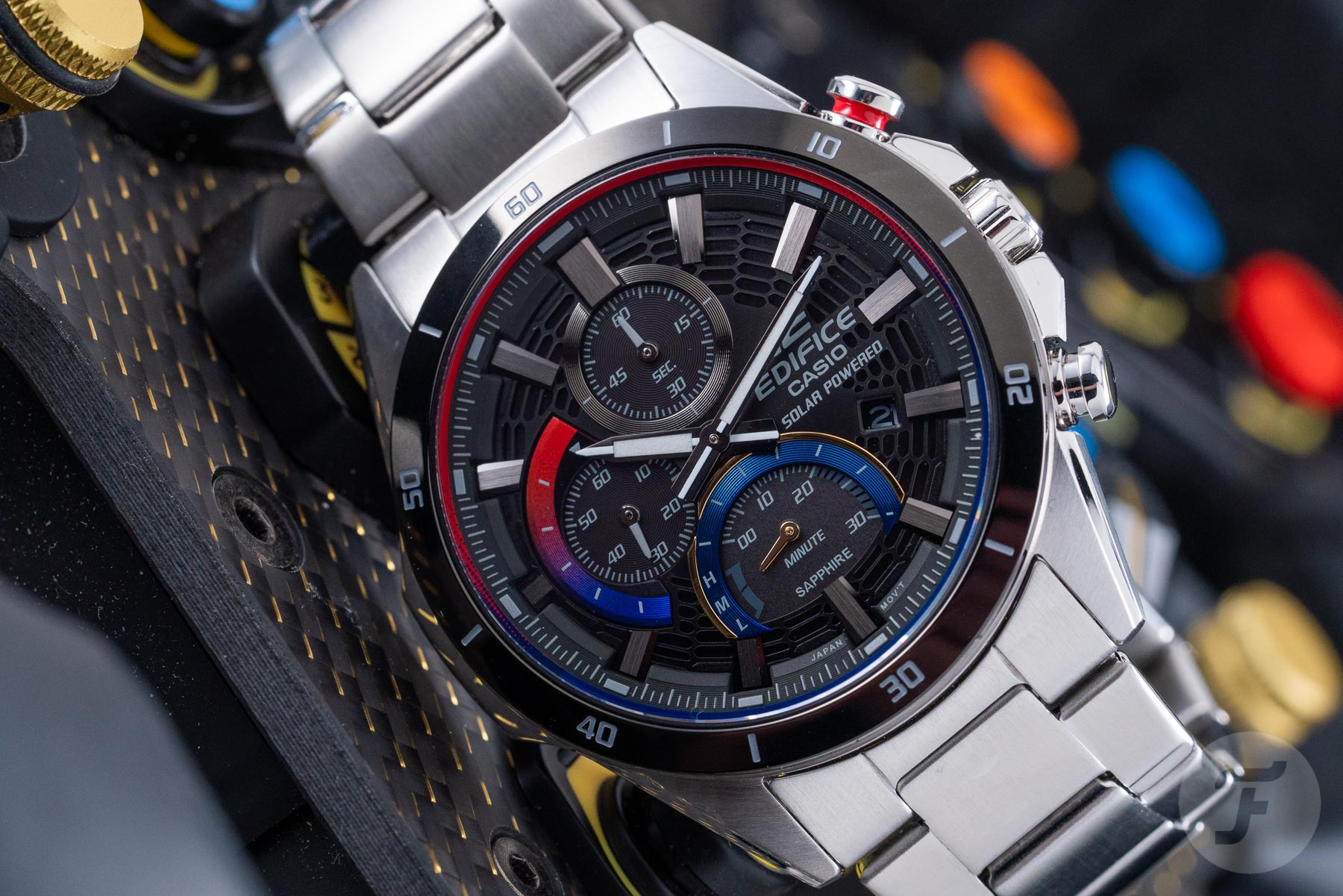 The 9-o’clock sub-dial of the EFR-573HG-1AV is pitched way out on its own (right up in the corner near the hour markers), but houses a very neat retrograde 10-minute counter. Okay, so this chronograph “only” goes up to ten minutes, but I’d actually love to see that more often in complications dedicated to tracking elapsed time on demand. Most of the things (although not all, in fairness) I time with a chronograph last less than ten minutes (for those of you with slightly unsavory senses of humor, you’re welcome). 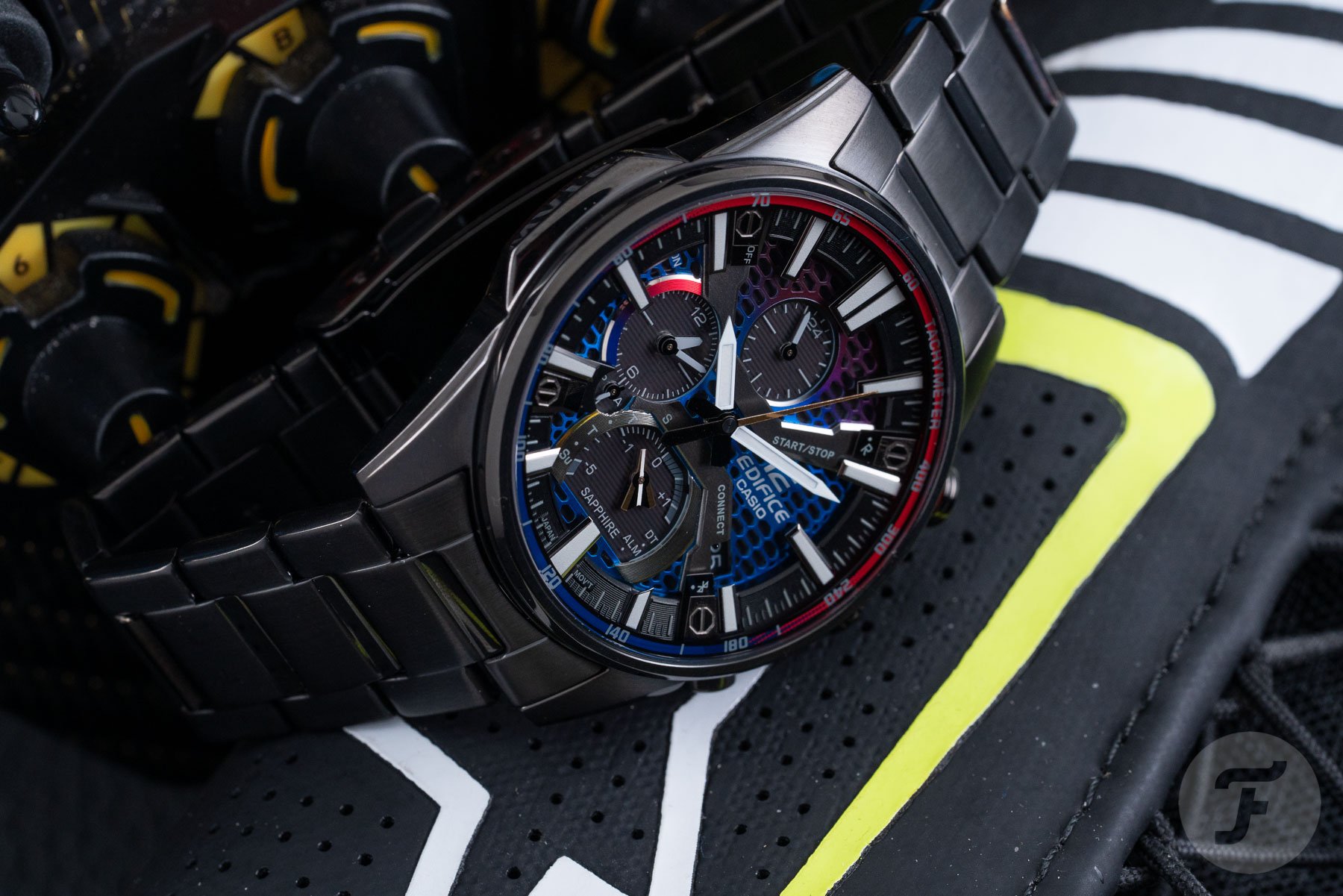 Weirdly, and rather annoyingly for me, the writer, and you, the reader, all four of these references are slightly different sizes. As lug-to-lug is generally regarded as the most important measurement when it comes to wearability, we’ll start there. The largest of these pieces is the steel-cased reference EFR-573HG-1AV. It has a lug-to-lug of 51mm, a diameter of 47.1mm, and a thickness of 11.3mm (which is considerably thicker than the thinnest watch in this collection). Packed into those dimensions we have a “1-second stopwatch” with a “measuring capacity” of nine minutes and 59 seconds (precisely), a date display, a 24-hour indicator, and, well, the time. The accuracy of this watch is slated at ±20 seconds per month, which, for those of you used to super-quartz, might feel like a lot. The battery life is approximately three years. 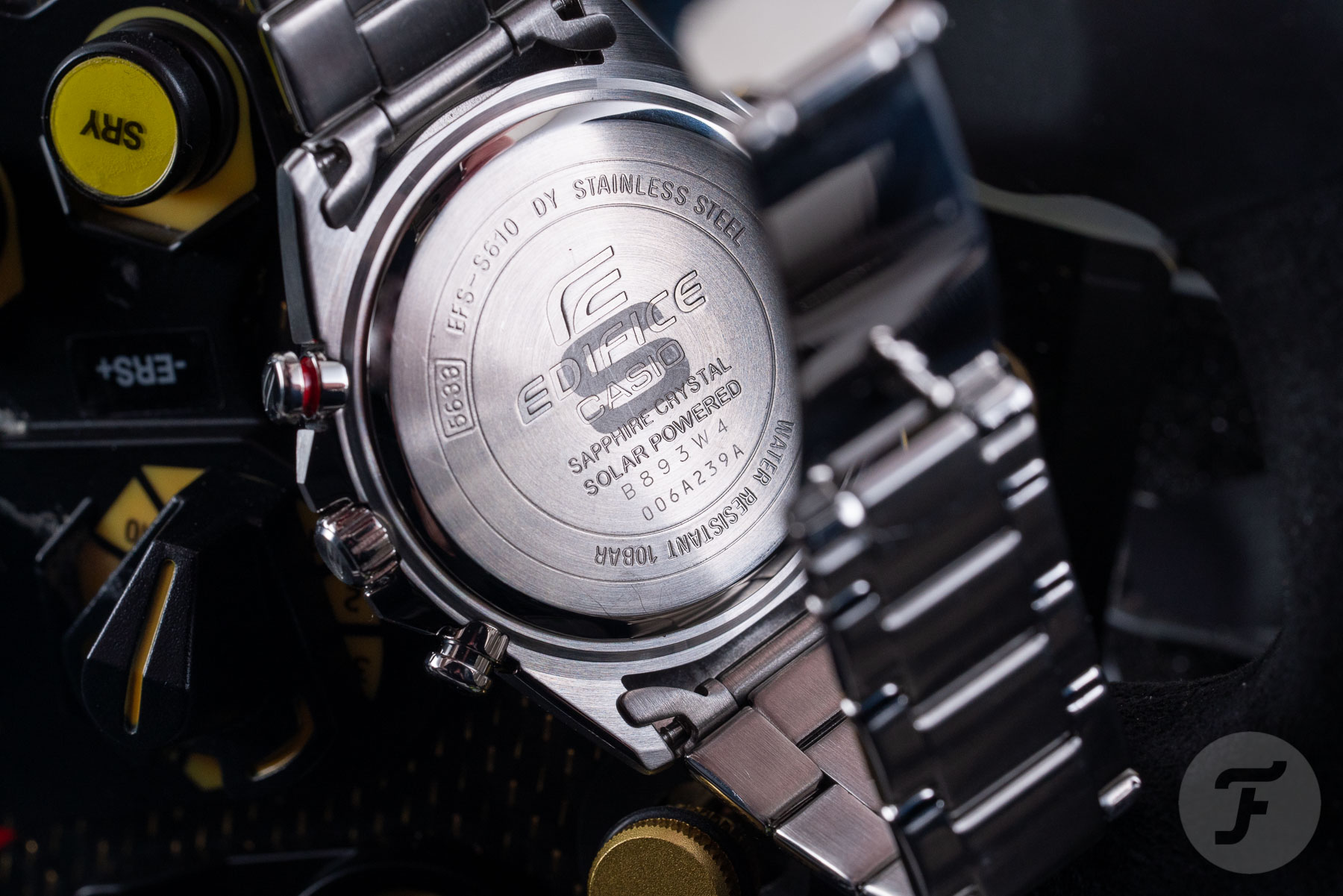 The second biggest is ECB-S100HG-1A coming in at 50 × 46 × 9.8mm. Now, while that doesn’t make this black-cased watch “small”, the features stuffed into this one certainly make it a compelling proposition. In comparison to the relatively basic EFR-573HG-1AV, this model has a world time function with 38 time zones (and cities) plus UTC, it has a daylight saving function (which would have been useful yesterday for me here in Germany), home city, and world time city switchability, a 1/100th-second stopwatch, with a “measuring capacity” (I love that term) of 59 minutes, 59 seconds, and 99 hundredths (just in case). Then, once you pass the hour, the hundredths-of-a-second readout gives way to a simple seconds readout until 23:59:59. 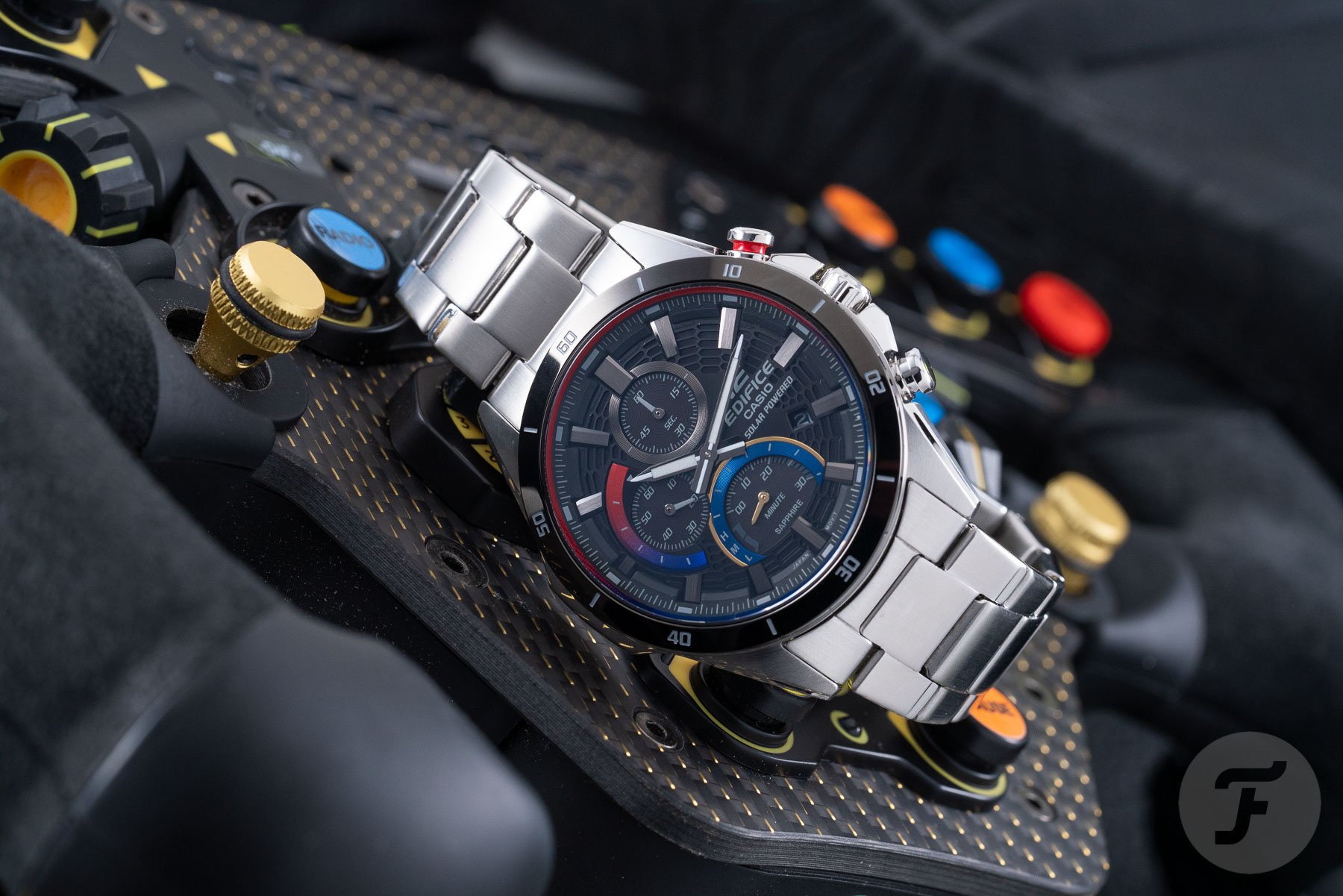 There is a 60-minute countdown timer, an alarm function, Bluetooth connectivity that enables fitness tracking (with beeping alerts), a double LED light for the digital display, and a separate light for the analog display (so many lights!), a full auto-calendar until the year 2099, a mute feature (thank God), a battery-level indicator for the rechargeable battery, which can, amazingly, run for seven months on a full charge (which is probably essential given a traditional quartz watch running this many functions would likely need a battery change every, oh, I don’t know, 37 minutes?), an energy-saving feature (it gets better), a 12/24 hour format, the days of the week in six languages (fingers crossed you speak at least one of them), and a hand-shift feature.

It also tells the time. 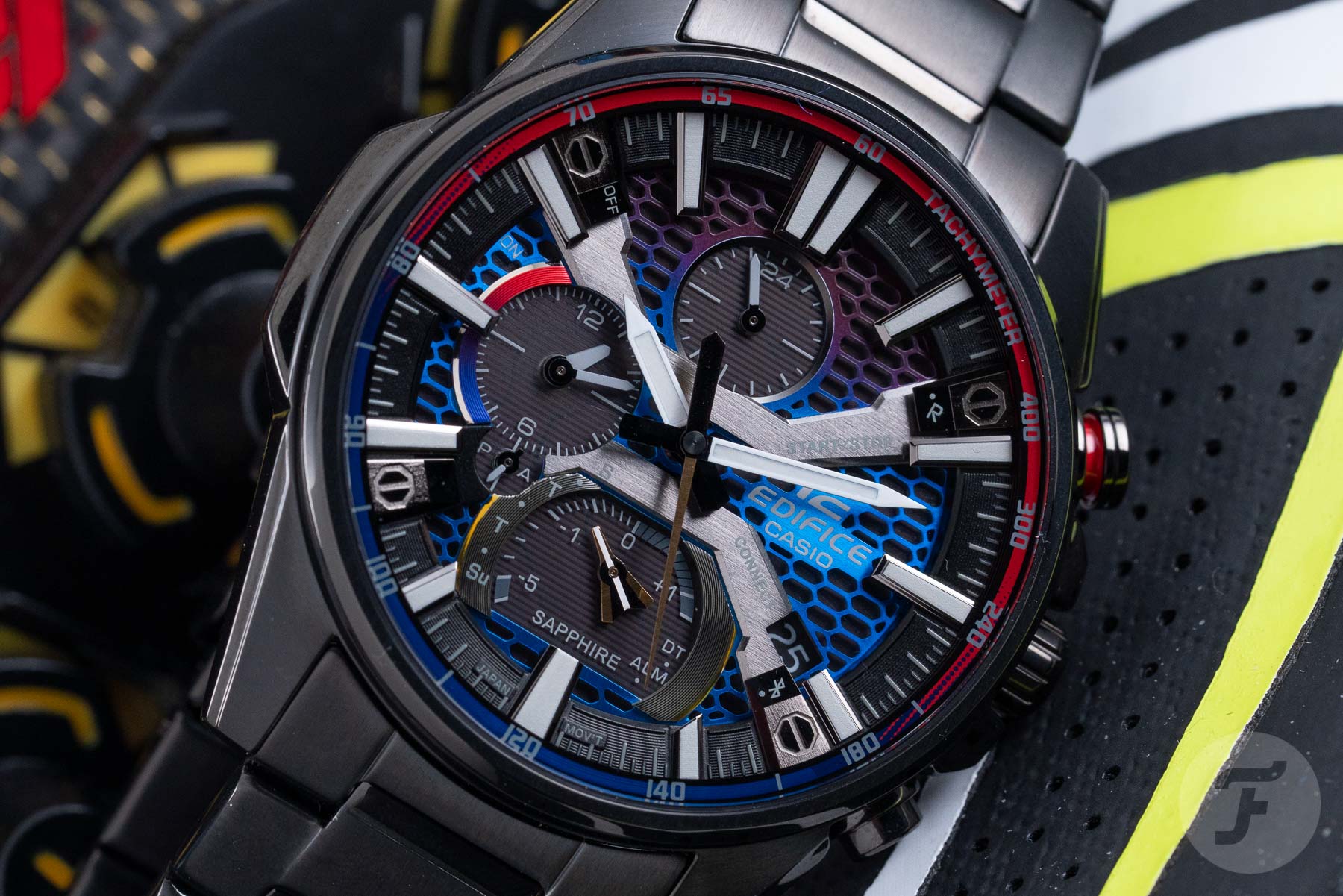 The next biggest is my favorite, the EQB-1200HG-1A. This model shares the weird, “X marks the spot” decoration on its face with ECB-S100HG-1A, but this model keeps the color in the background. It’s not as wildly functional as the ECB-S100HG-1A, but it does enough. This one also has Bluetooth connectivity and a rechargeable battery that can go for five months between exposure to light. It has a dual-time function, world time, a stopwatch with a “measuring capacity” (why have I never heard that before?) of 23:59:59, flyback functionality, a daily alarm, a full auto-calendar (to the year 2099), an energy-saving feature, it tells the time, and it does so with accuracy expectations of ±15 seconds per month (with no mobile connection during that period). 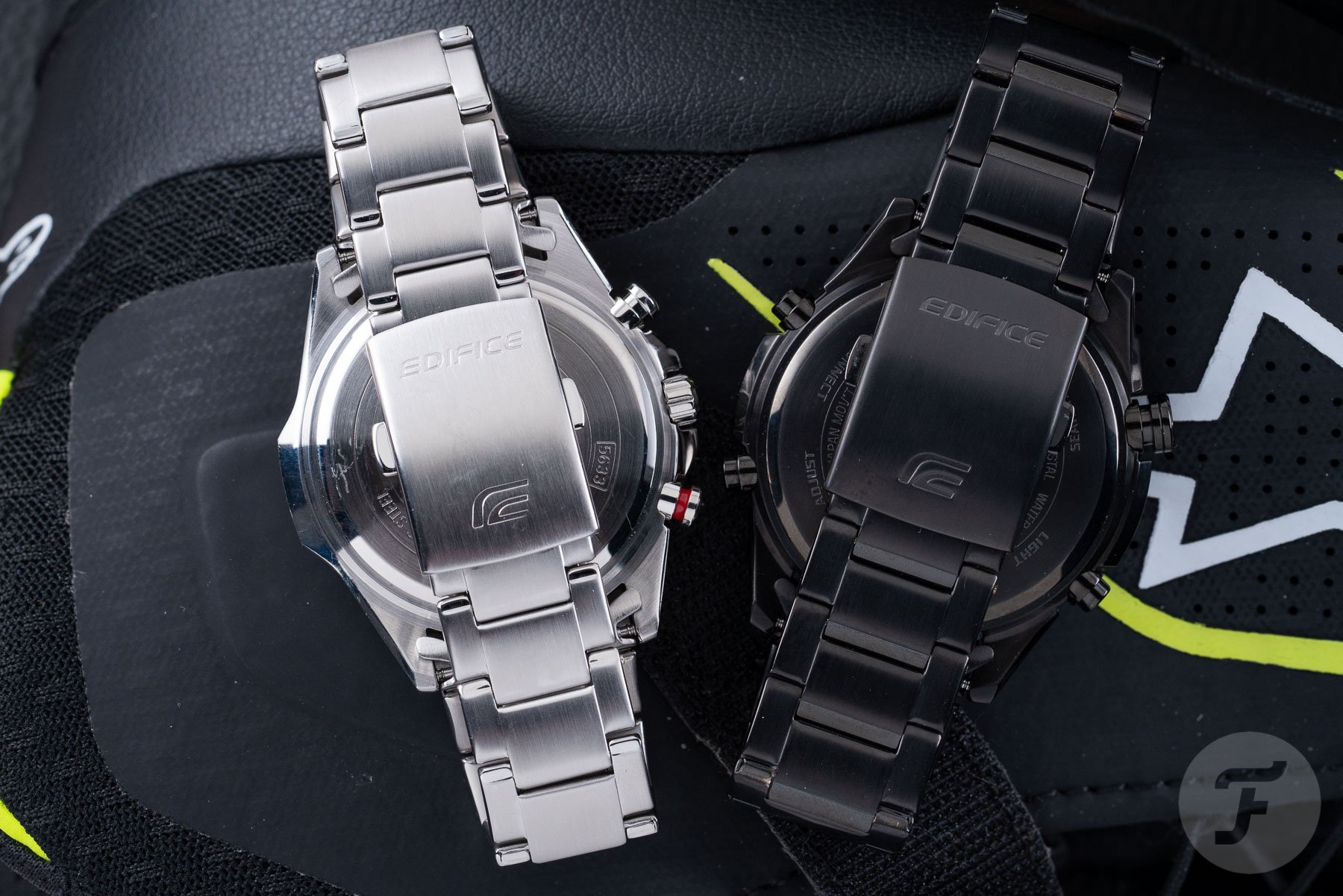 Lastly, we have the second steel-cased model, reference EFS-S610HG-1AV. It measures 50 × 45.2 × 9.7mm. It weighs just 129g. This model is solar-powered but doesn’t boast a crazy array of features beyond that. It has a 1-second stopwatch with a humble “measuring capacity” of just 29 minutes and 59 seconds. It will run for six months without a charge. You should expect it to keep time to ±20 seconds per month. There is a date display and the watch, of course, tells the time. It is, perhaps, the most immediately digestible of the bunch. It is quieter, and the heat-gradation embellishments are implemented in a less obtrusive way. 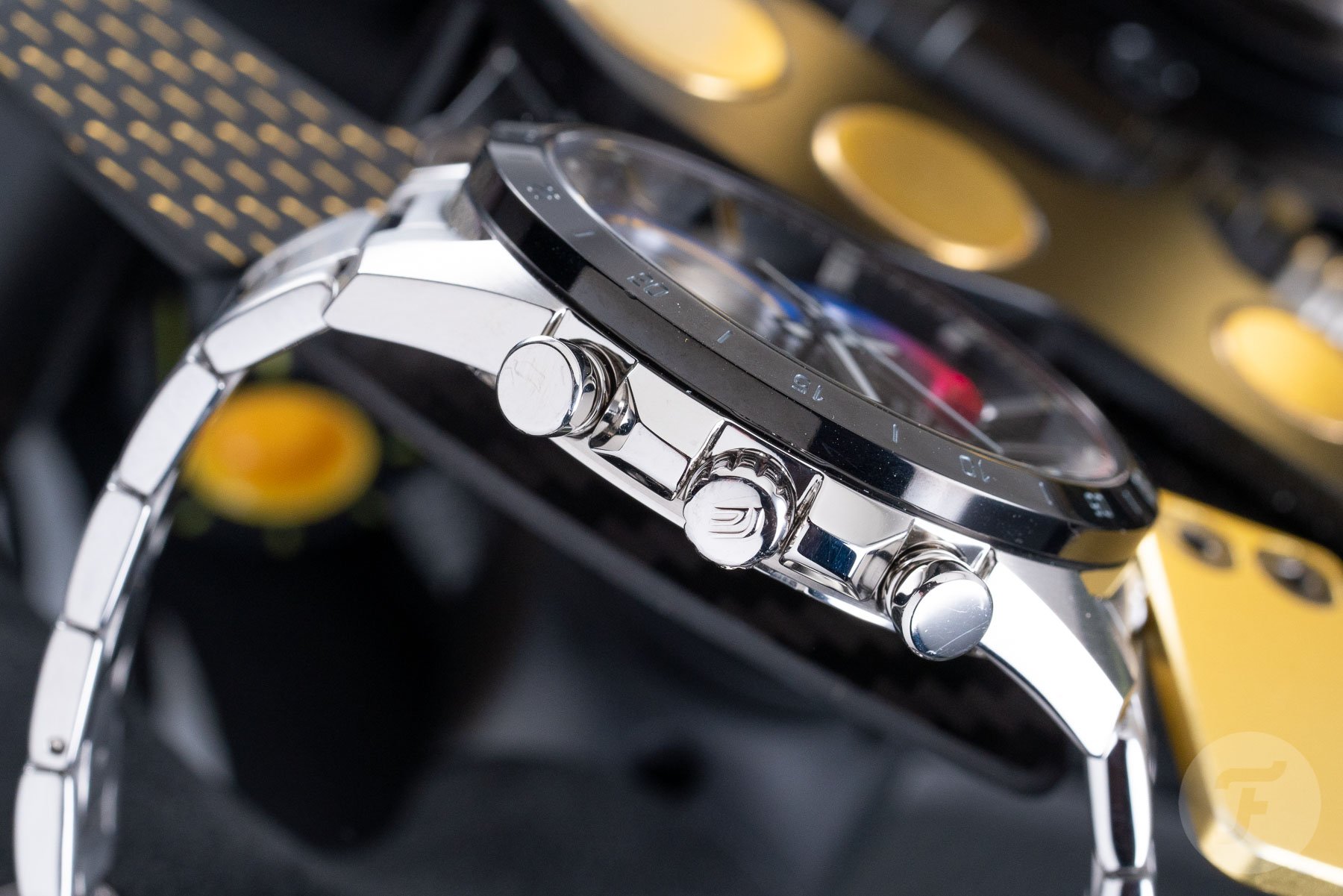 However, one must assume that if you are drawn to this range at all, you are likely drawn to it for the heat gradation itself. Although I am not generally a fan of blackened watch cases, I would choose one of the blackened models here. I think they feed into the overall concept better. Against the moodier backdrops, the bright colors of the heat gradation pop. Aesthetically, my favorite element is the heat-graduated grill. Functionally, I am drawn to the super-duper module of the ECB-S100HG-1A (that’s module 5658, for anyone that cares).

Yes, it has a colorful bow tie on its face. No, I don’t love, love, love that element. But I do love the functionality. And in this instance, I could also see myself enjoying the black case coating. This watch, quite simply, reminds me of a garage. It reminds me of a finely tuned racing machine. One inevitable side-effect of high-performance racing is a scratched-up body kit. I’d like to see this model beaten up. Heck, if I could design a fifth model in this collection, I’d like to see it pre-aged! Give me module 5658 in a blackened, pre-aged housing. Put a fully graduated grill behind a black bow tie and send me the bill.

Who are these watches for?

The younger watch fan seems to be the target market here, however. When I was a teen, I remember being fascinated by color-changing things. Petroleum-inspired yo-yos, mood rings, heat-reactive sticker albums… Okay, maybe the kids of today don’t have quite the same visceral reaction I did to those things then, but who knows? If I had a child who was into motor racing and around the age of 14–17, I would certainly consider one of these pieces for them.

However, I could well see these being a great one-watch collection for someone perhaps not into watches but very much into cars. The heat gradation provides a nice link and the retail prices, between €250 and €350 euros, are attractive. It is not cheap (it is exactly in MoonSwatch territory), but it is probably an amount that many people could imagine spending on their loved one for a special occasion.

If you’d like to study the specs and specifics of these watches, check out Casio’s official website and the heat gradation section here. Let us know what you think of these pieces in the comments below and whether or not any of the models in the collection (or even a combination of their elements) are for you.