What are the differences and improvements of the new module 3495?
Gerard Nijenbrinks
comments 39
Share

Of course, the number of G-Shock Square variations is almost endless. But in my opinion, the ones closest to the original DW-5000C from 1983 are the most significant. Their modest appearance never gets old. In the current line-up, the closest aesthetic corollary would be reference GW-M5610 and, when it comes to the technical side of things, the GW-5000 could be seen as the closest successor. A combination of those two, in my opinion, would be a perfect re-edition or homage to the original DW-5000C, but that’s something for another day.

While most of us enjoyed the summer holidays, G-Shock slyly updated the module of the aforementioned important Square models. In this article, I’ll use the GW-M5610(U) to explain the differences and improvements. The design of the GW-M5610 didn’t change. Only Eagle-eyes and G-Shock insiders will notice tiny differences. At the end of this article, you’ll belong to this group. For the rest of the world, the update will only concern the functional improvements of the new module 3495. 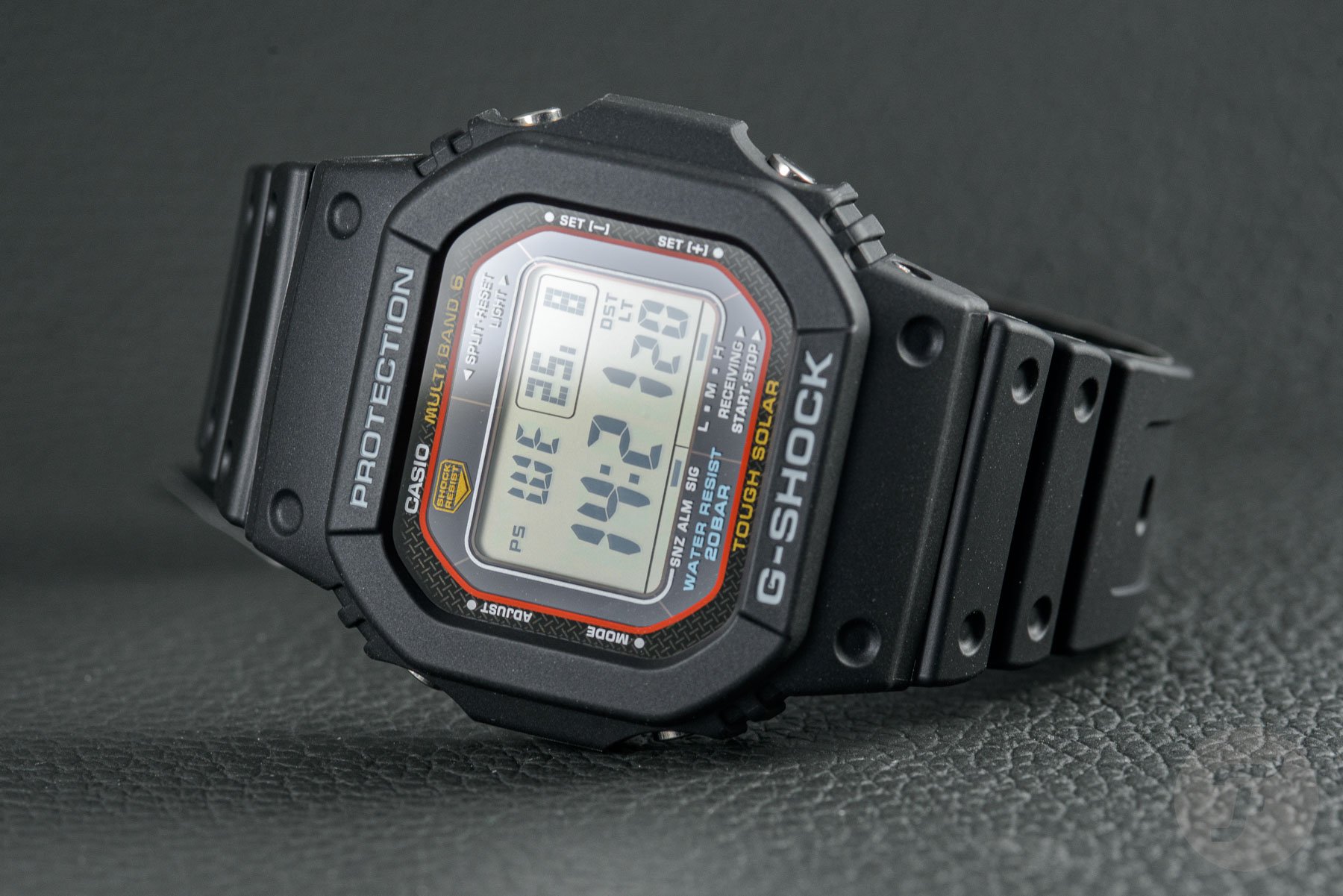 I’m glad G-Shock didn’t change the design of the GW-M5610’s face or display. It was very attractive already and very close to that of the original DW-5600C. What did change, however, was the reference number, which is now GW-M5610U-1. My best guess is that the U stands for updated. Formerly 3159, the new module number became 3495. Having the boring numbering stuff out of the way, let’s start with looking at those tiny visual differences. It will allow you to decisively separate the new from the old version, leaving others puzzled. 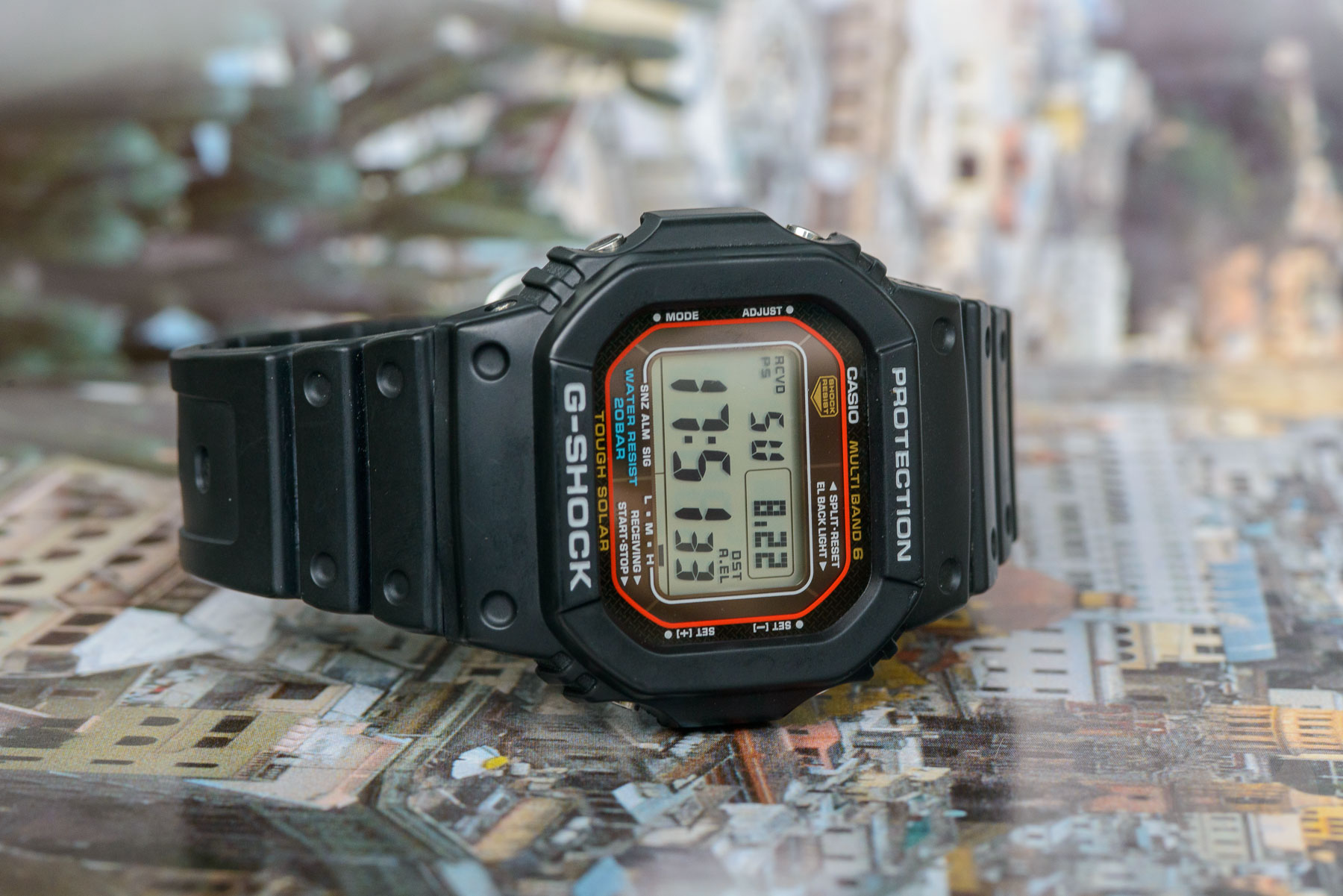 LIGHT or EL BACK LIGHT?

One of the things that changed with the new module is the display lighting, which caused a minor difference in print on the watch’s face. Formerly the GW-M5610 used a green electro-luminescent panel that lit the entire display from the back (hence EL BACK LIGHT). The new module 3495 uses a white LED to illuminate the display from the left. Therefore the indication — found in the top-right corner, close to the light button — changed to just LIGHT.

Obviously, the light can be operated manually by pushing the top-right button (B). However, both the old and the new module offer the possibility to have the light come up automatically by just tilting the watch towards you. G-Shock named this feature AUTO LIGHT, and when enabled it will be indicated in the display. In module 3159 A.EL was shown on the dial, while the new 3495 module shows LT.

These two indications, one on the screen and one on the display, are the only visual differences between the old GW-M5610-1 and the new GW-M5610U-1. And now you know how to keep the versions visually apart like a pro, let’s dive into the functional improvements of the module. I’ll discuss them in the order of scrolling through the modes in the menu. 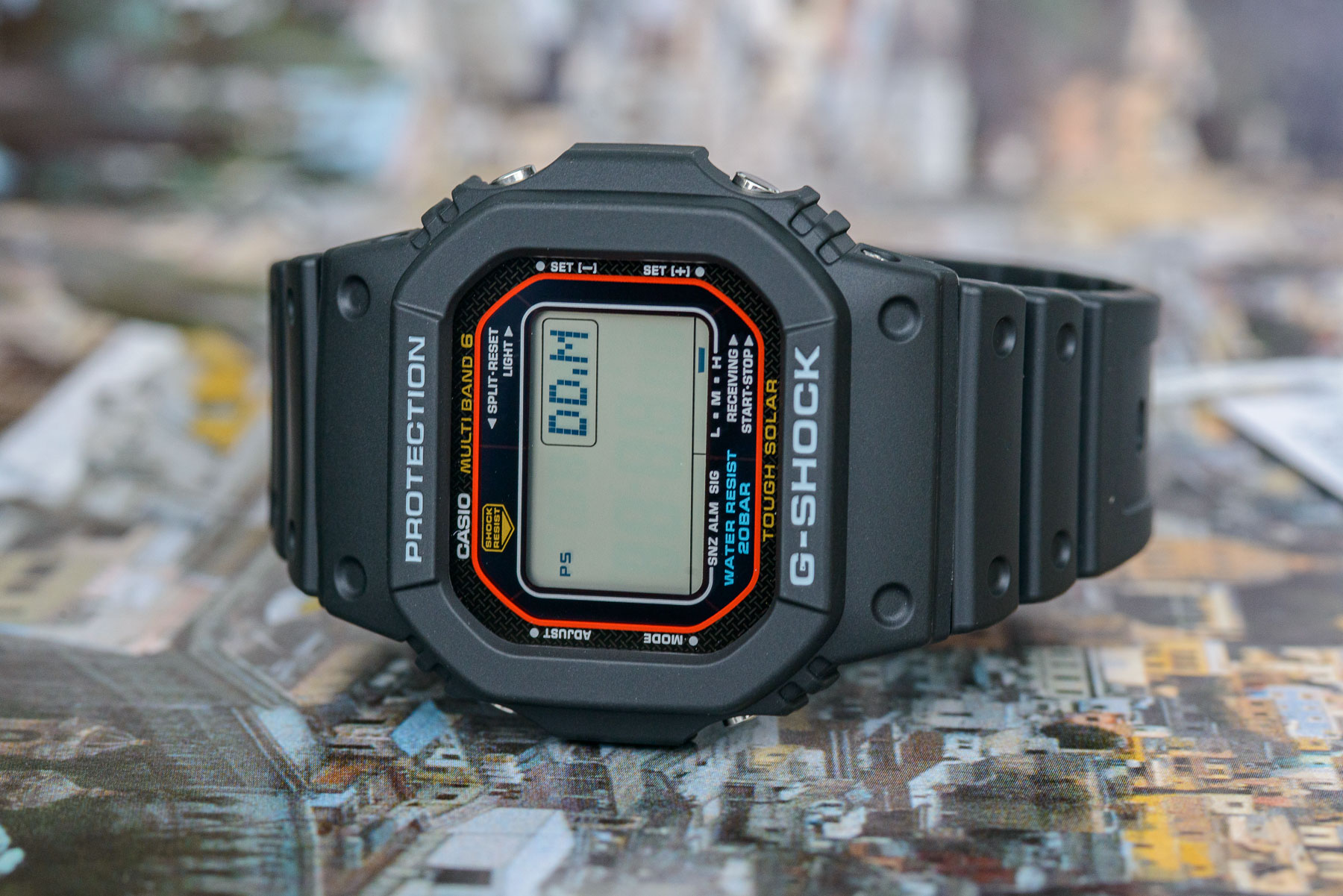 Date first, then the month

This is, for us as Europeans, a big one. For almost 40 years we had to live with the date on our G-Shock Squares in US/Asian format. That means in the format of MM/DD; so 03/09 means March 9th, while in Europe we use DD/MM and thus the same 03/09 indication means the 3rd of September. This was only solved two years ago with the arrival of the 3459 Bluetooth module in the line-up of solid metal Squares. 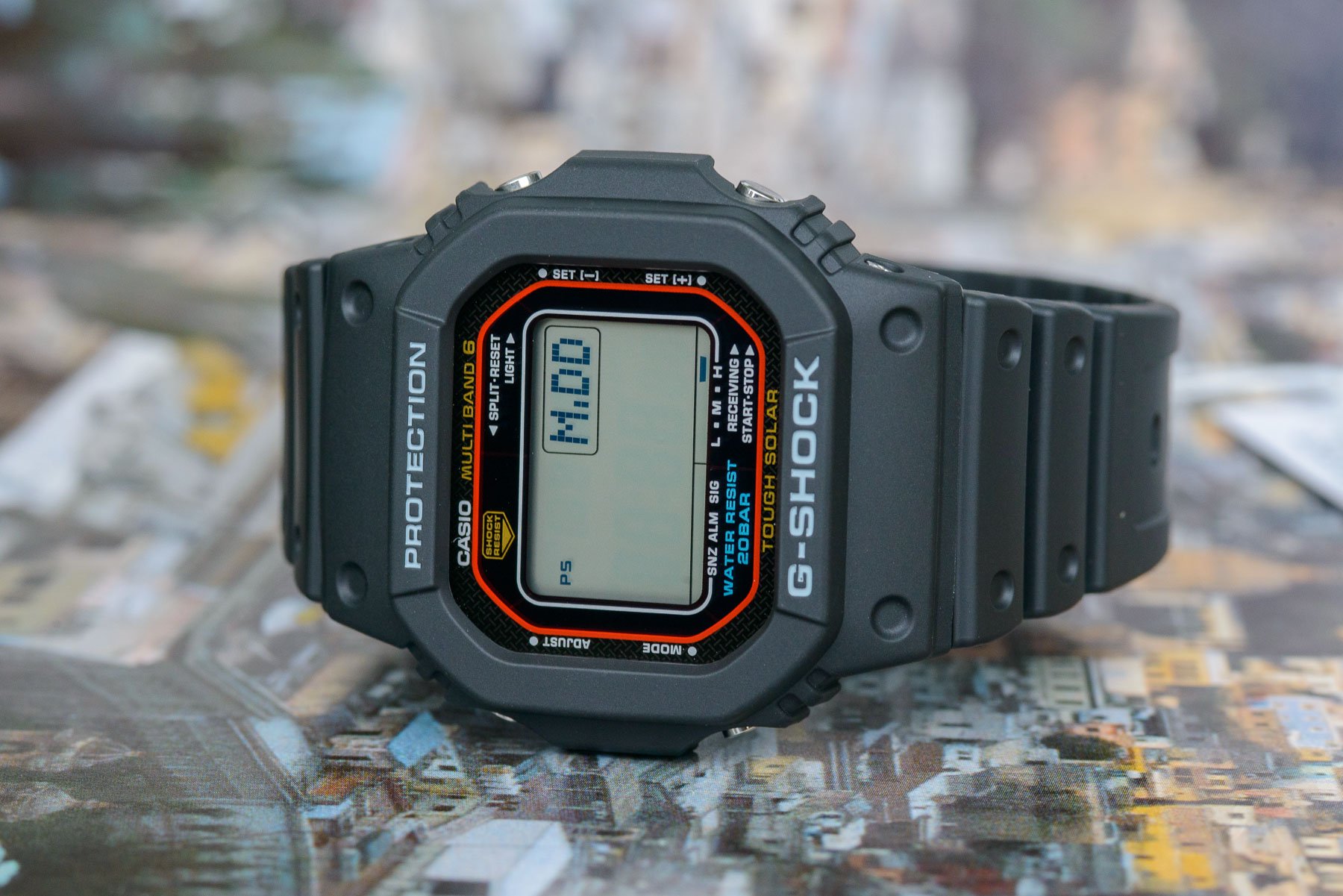 Formerly, only a Month/Date sequence was available

For the more down to earth, and more true to the original, resin models, the GW-M5610U with its new 3495 module is the first one to offer switchable DD/MM and MM/DD date notations. As a bonus, the DD day abbreviation can be set to six languages, English, Spanish, French, German, Italian, and Russian. The former model only had English as an option.

In the list of 48 cities (plus UTC), three cities have been changed. Miami, Toronto, and Santiago were sacrificed, while Kathmandu, Buenos Aires, and Fernando de Noronha were added. Here the first and last are the most important because they led to the availability of two additional time zones. Katmandu lives at GMT +5 3/4 of an hour, and Fernando de Noronha at GMT -2 hours. Both time zones were not available in the old module and made the total number of different time zones grow to 31 in the new one. 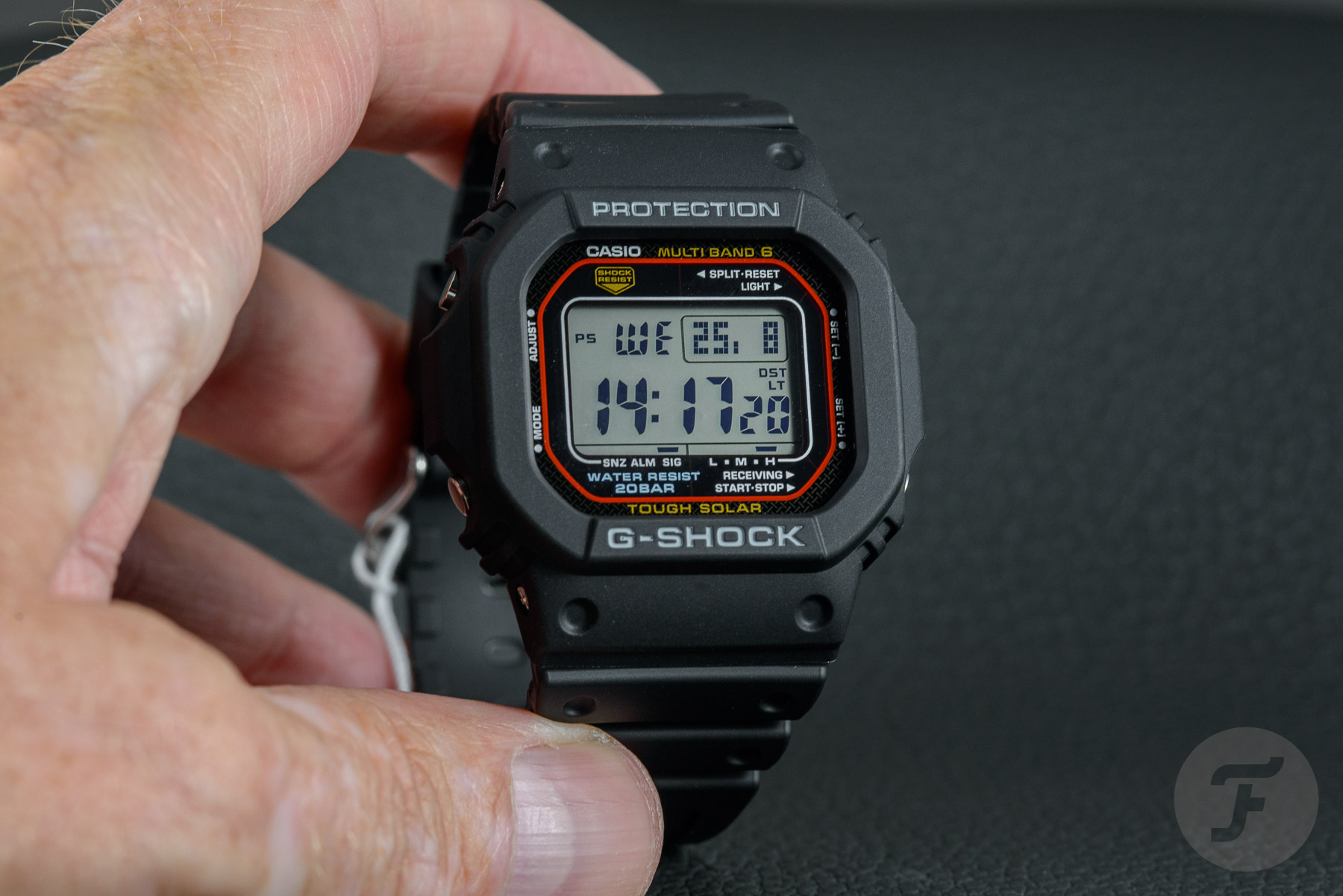 The world-time mode directly shows another important improvement of the new module. During the use of a second time-zone in world-time mode, the original home time of the watch remains visible in the display as well. A very useful, almost indispensable function when traveling. In the old module, the abbreviation of the chosen city remained visible (like NYC), but where you are will be something you’ll remember yourself and hasn’t to be kept in the display in my opinion. This feature, of permanent availability of the home time in the display, shows in the stopwatch and timer mode as well.

The feature of permanent displaying the home time sacrificed the stopwatch somewhat. It still runs to a maximum of 23 hours, 59 minutes, and 59 seconds, but the old module offered 1/100 of a second for the full maximum duration of the stopwatch. With the new module, 1/100 of a second is only available for the first hour (59′ 59” 99”’), thereafter the maximum accuracy is one second. For me, the permanent availability of the time in the display is way more usable.

The new module offers no changes in the functionality of the alarms (four alarms, snooze alarm, and hour signal) and timer (in a range from 1 minute to 24 hours). With the pleasant exception — as said — that while using the timer-mode the home-time remains visible in the display. 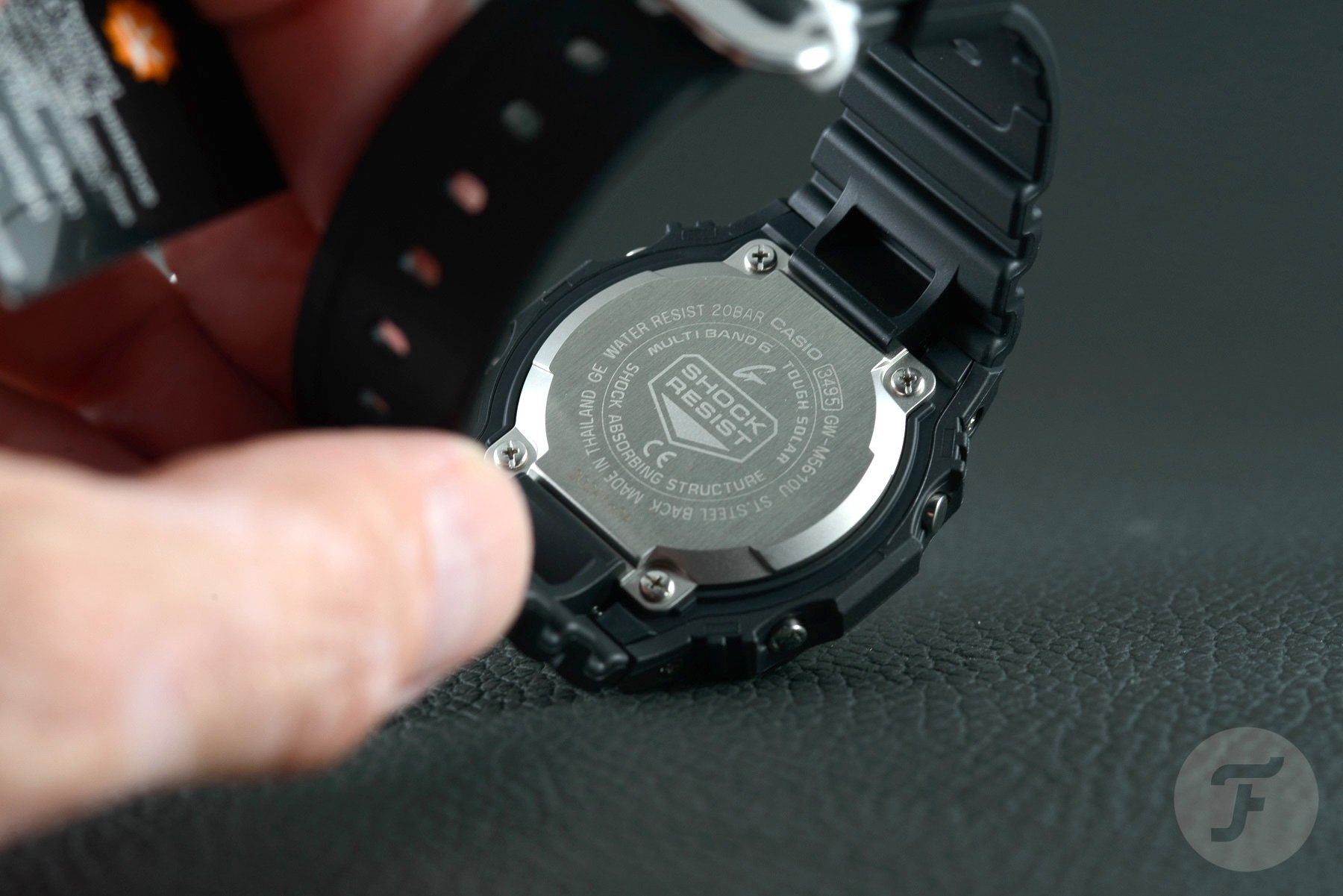 The GW-M5610U-1 case back shows a few visual differences compared to its ancestor. A green sticker on the case back indicated the CE certification of the former model. With the new model, it’s engraved. There’s some extra technical information as well, indicating that the GW-M5610U sports Multiband-6 time reception, as well as that it’s solar-powered. This information is found on the display side of the Square as well. All other engravings of the case back are pretty much equal to the old model. Although the new case back teaches us that the GW-M5610U is produced in Thailand, while the old GW-M5610 was produced in China. 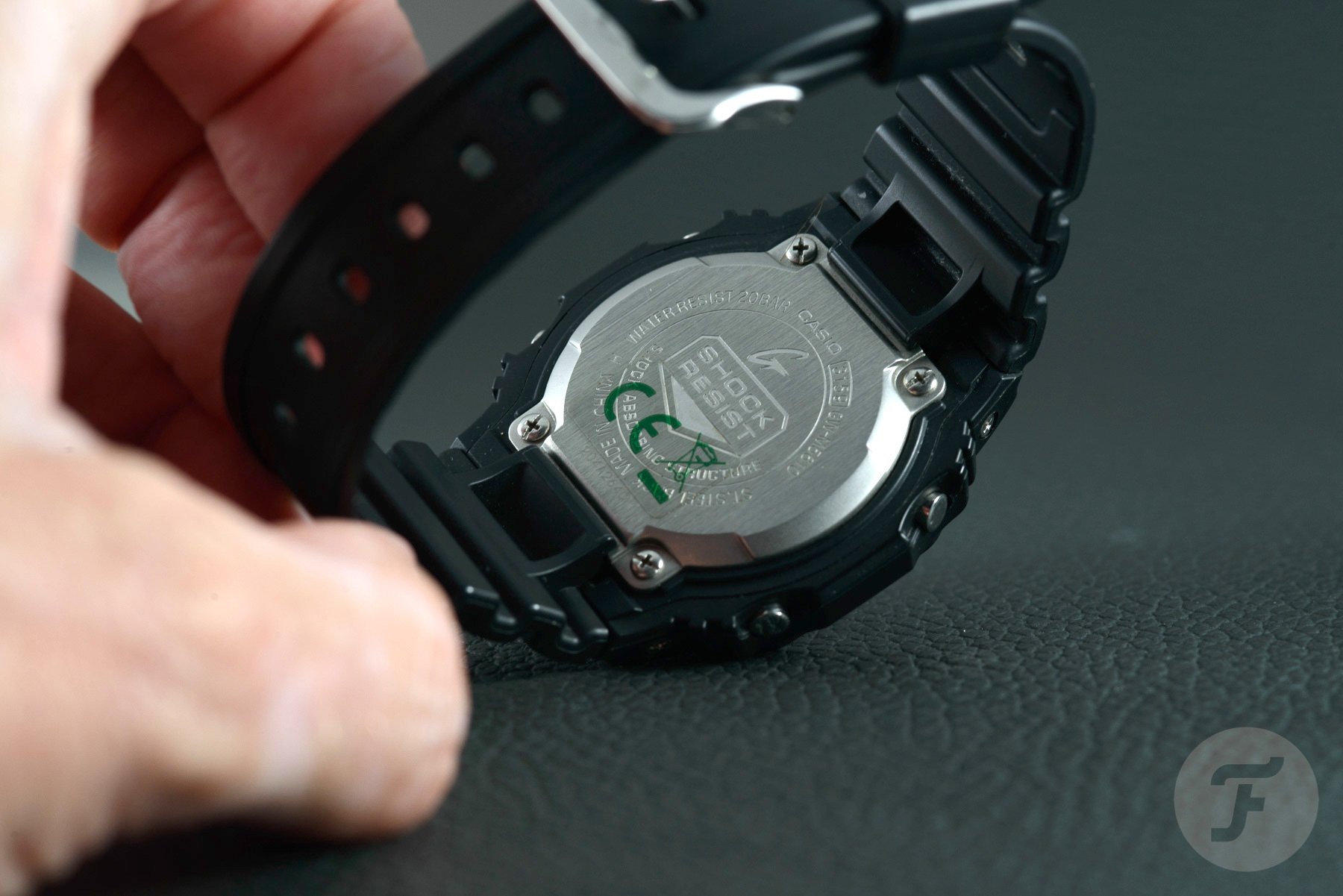 The former case back with CE sticker

It’s an easy conclusion that the new 3495 module is quite a step up from its ancestor, the 3159. For Europeans, the possibility to show the date in DD/MM format will be most welcome, plus the one that’s – in regular time-keeping mode –permanently visible. But for others, the feature to show the watch’s home time in the world time and other modes might be the most important update.

Definitely, the Katmandu time zone of GMT +5 3/4 hour is a nice one. I’ve never seen a watch sporting this rare time-zone offset. Only that makes it interesting, even when you probably won’t be in Nepal that often. The new type of display illumination impresses me the least. I mean, the new white light from one side is adequate and shows the display very clear during dark hours. But I’m an old-fashion guy and like the dim green electro-luminescent backlight panel just a little bit better. 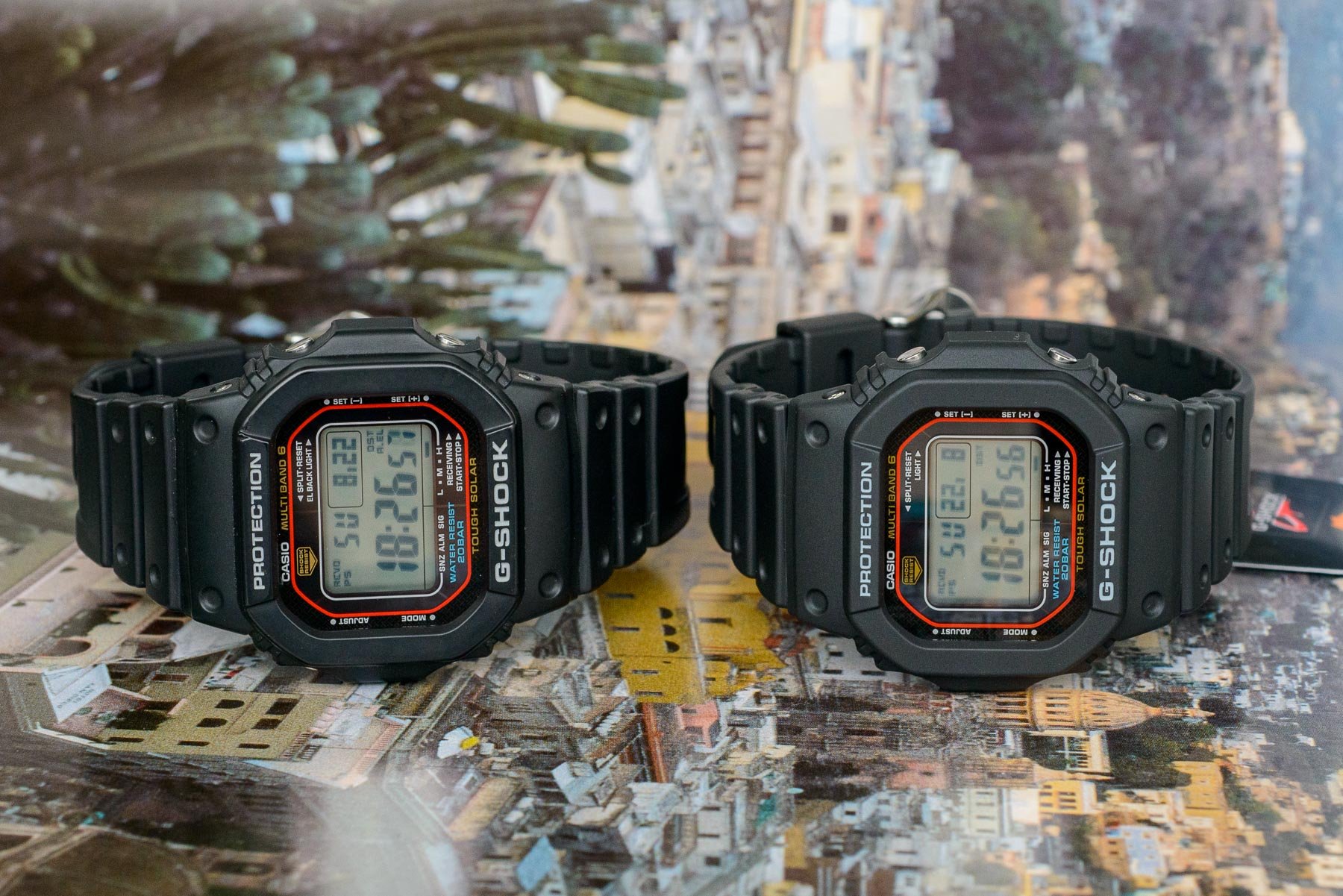 Another positive point for the new GW-M5610U-1 is that the updated module didn’t cause a price increase. In Europe, the official list price still is only €129. It might very well be the best €129 you’ll ever spend on a watch.  There’s more on the GW-M5610U-1 at Casio Europe’s website, as well as the possibility to order (choose your country or region first). US readers go here.

For the old and new modules, operation guides are found here (3159) and here (3495) and you’ll find me on Instagram @gerardnijenbrinks.