Ever since the first G-Shock Square was introduced in 1983, we’ve seen various improvements to its movements, a.k.a. modules. Not only have there been enhancements in functionality but also in technical construction and features as well. The latest G-shock Square models now offer Bluetooth connectivity. But how useful is it really? Do these additional connected features really add value? And are they worth the extra costs compared to radio-controlled-only models?

Please bear in mind that this article is about modules used in the beloved Square models. For other models, more capable modules exist. Larger cases allow for larger modules. Larger modules are able to house more sensors and provide equally more functionality. But, as we like the original G-Shock Square design a lot, we’re interested in seeing which functions Casio is capable of fitting into these cases. 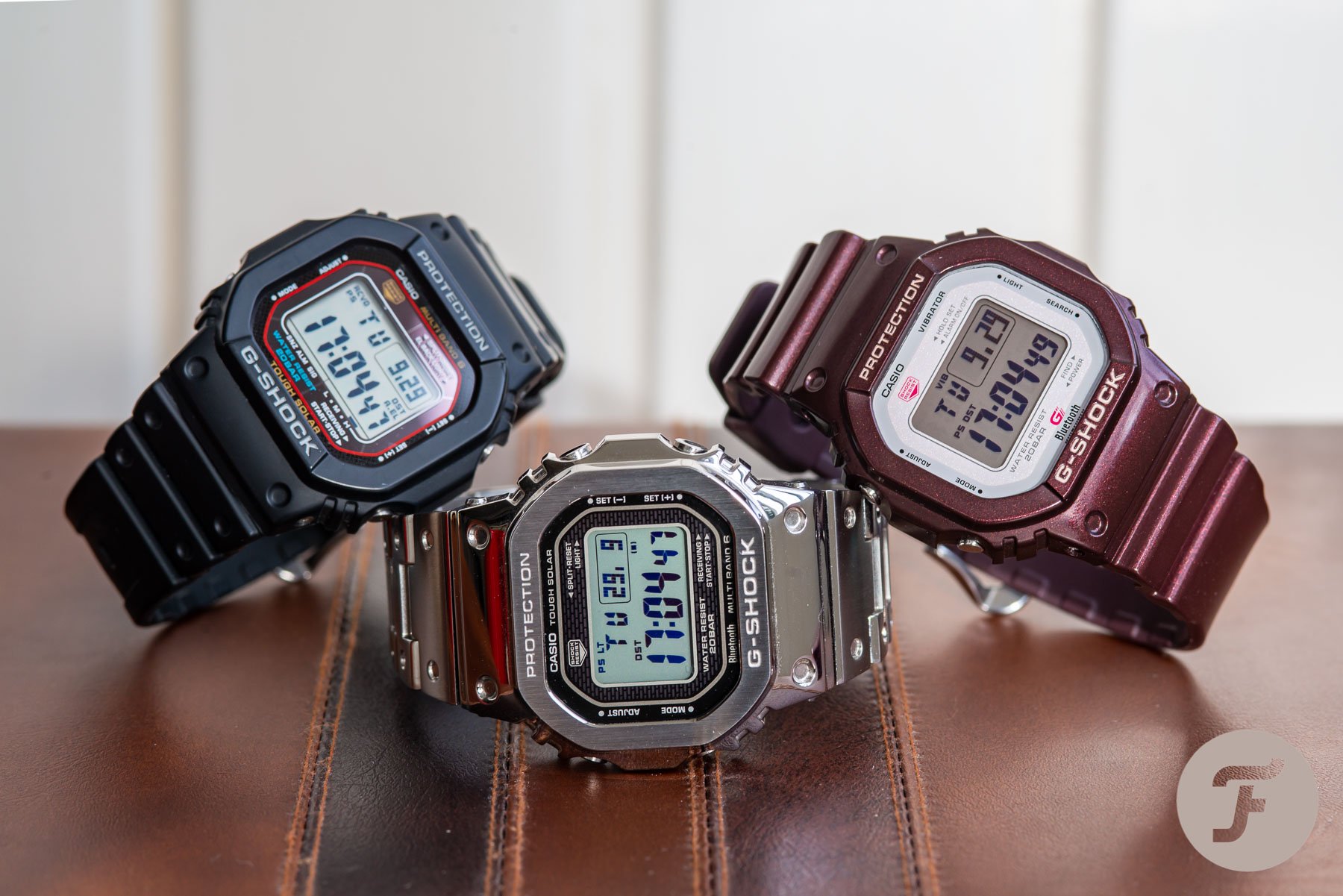 With the widespread presence of smartphones, the availability of data from GPS and all kinds of other sensors became readily accessible. Not to mention the torrent of messages, reminders, and emails able to reach us throughout the day via our smartphones. It was in 2012 that Casio first cottoned-on to the potential of somehow channeling this information through the iconic G-Shock Square. The solution was to use the data from a smartphone — which most people carry with them anyhow — and send it to the watch’ module. 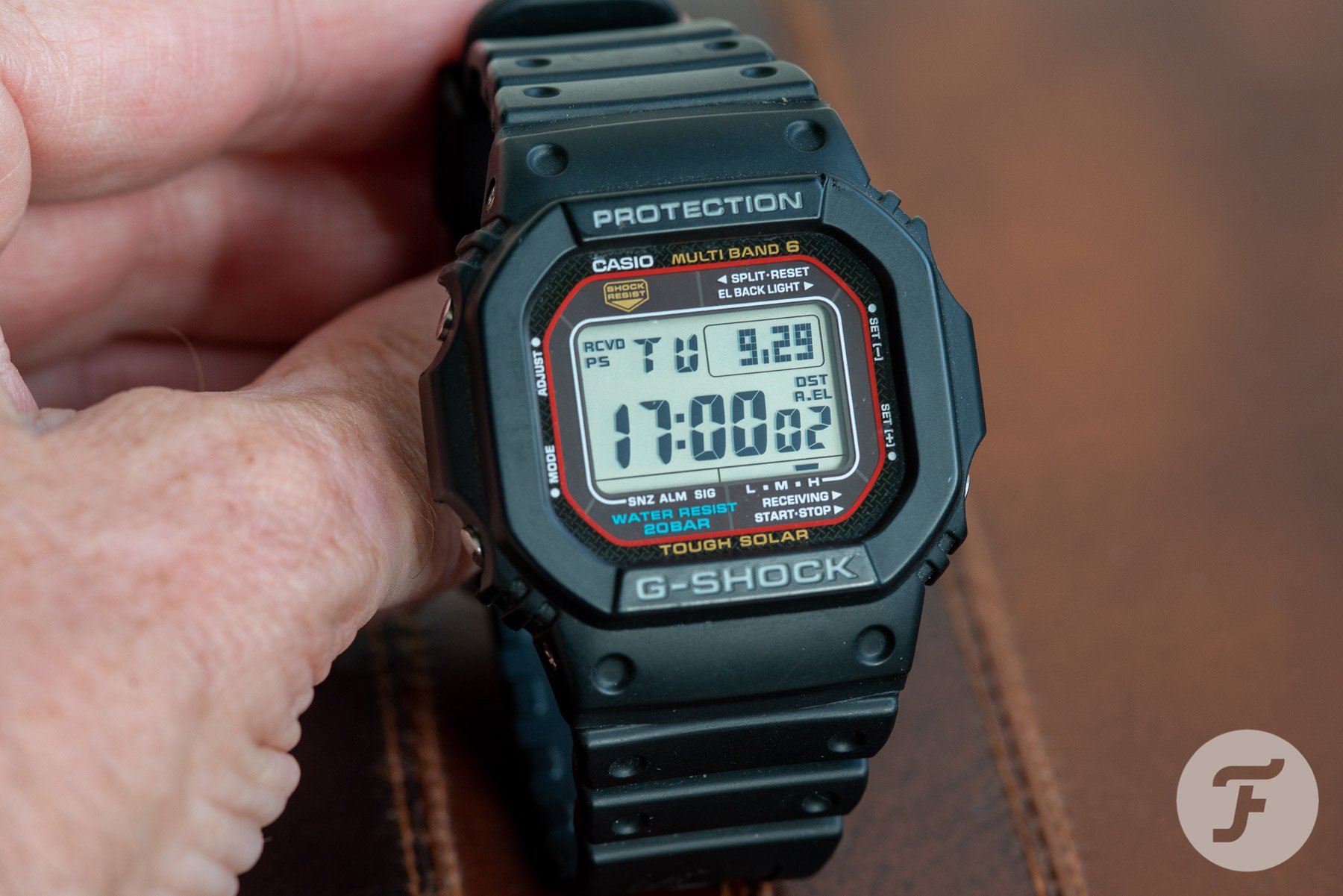 At first, there was Multi-Band

Obviously, the correct time and date are the most useful pieces of information to send to a watch. It saves the user from often tedious setting actions. But, as well, it ensures your watch always indicates the right time. Before the use of smartphone data, the most advanced G-Shock modules, like the 3159, used radio signals to set the date and time. 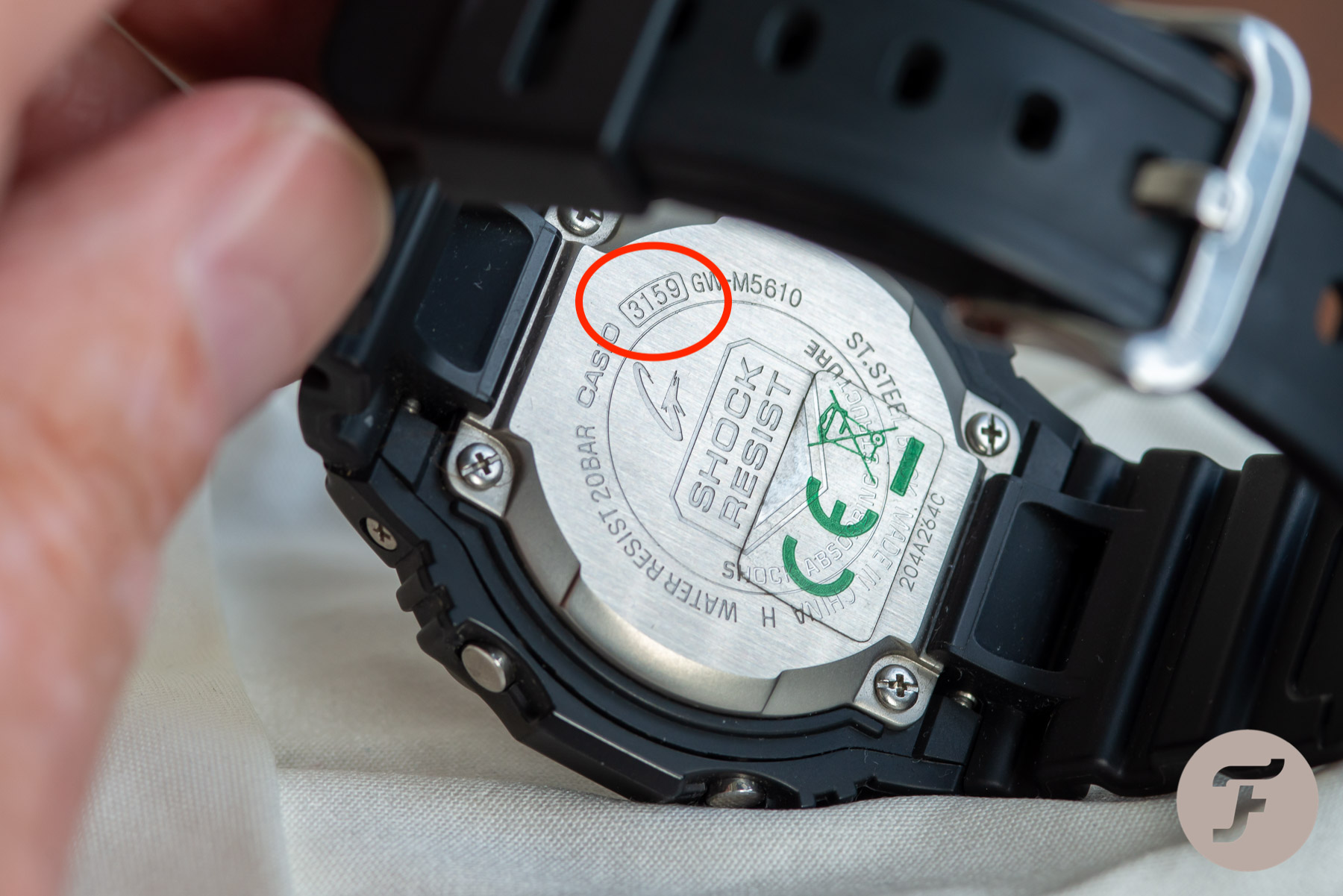 Module number indication on the      case back

Casio first named this feature Multi-Band 5 and later Multi-Band 6. The downside of that system is that one has to be within reach of the used radio signals for this automatic time setting to work. You’ll find the reach of the used radio transmitters, and regions where they can be used by the Multi-Band 6 system, here. If you’re unlucky and not within the area these radio stations cover, you still have to adjust the time and date manually on the module. 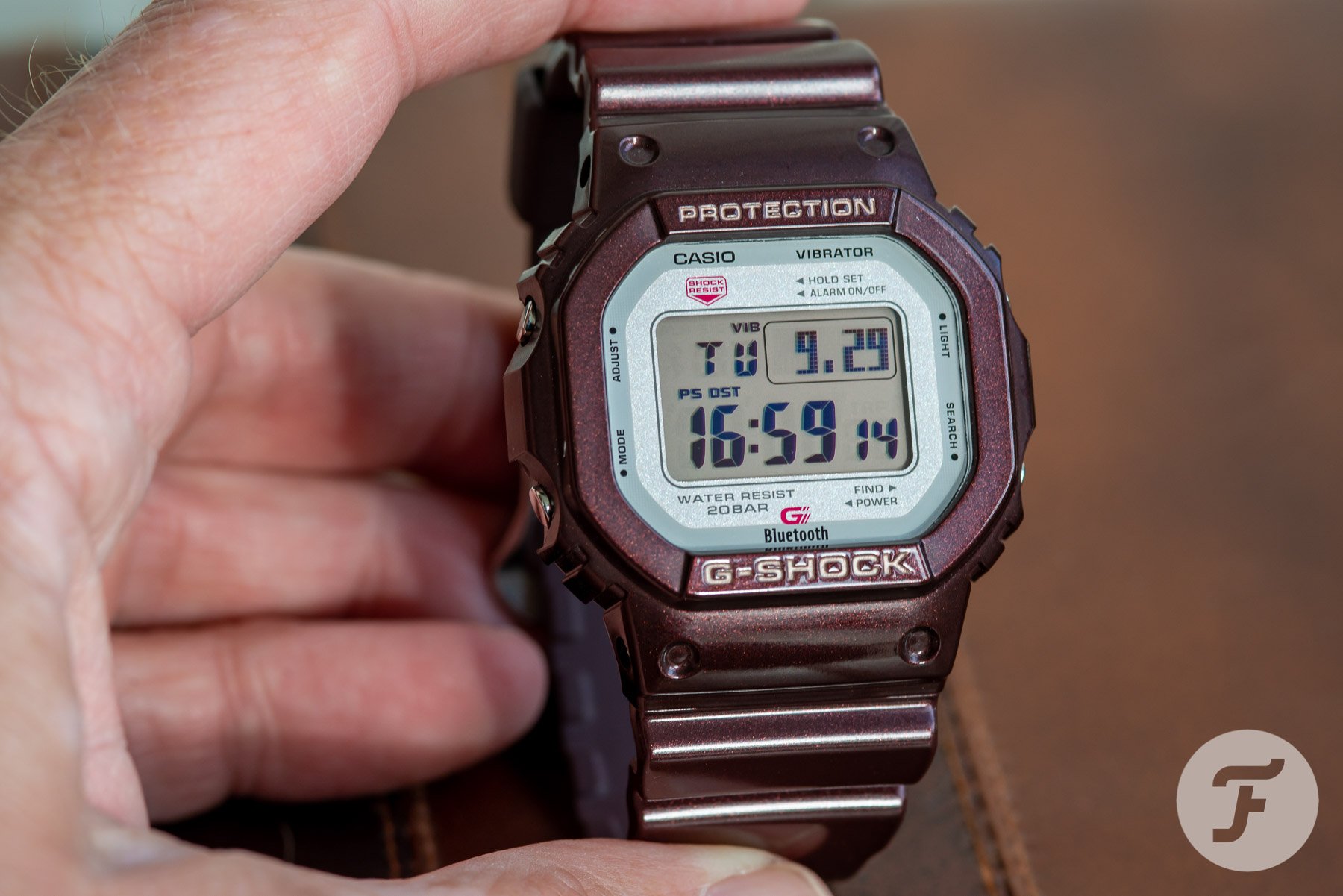 Then the first Square Module with Bluetooth technology appeared

So, in 2012 Casio introduced the first G-Shock Square with Bluetooth technology. It was module 3409 and I must say it wasn’t a bad start at all. Specifically, the features that the Bluetooth connection — in cooperation with the G-Shock+ app — provides are quite spectacular. Of course, it features (automatic) time and date setting. But it notifies the wearer as well when a connected smartphone rings. And even, when an email or message is received. Ditto with upcoming calendar items and reminders. 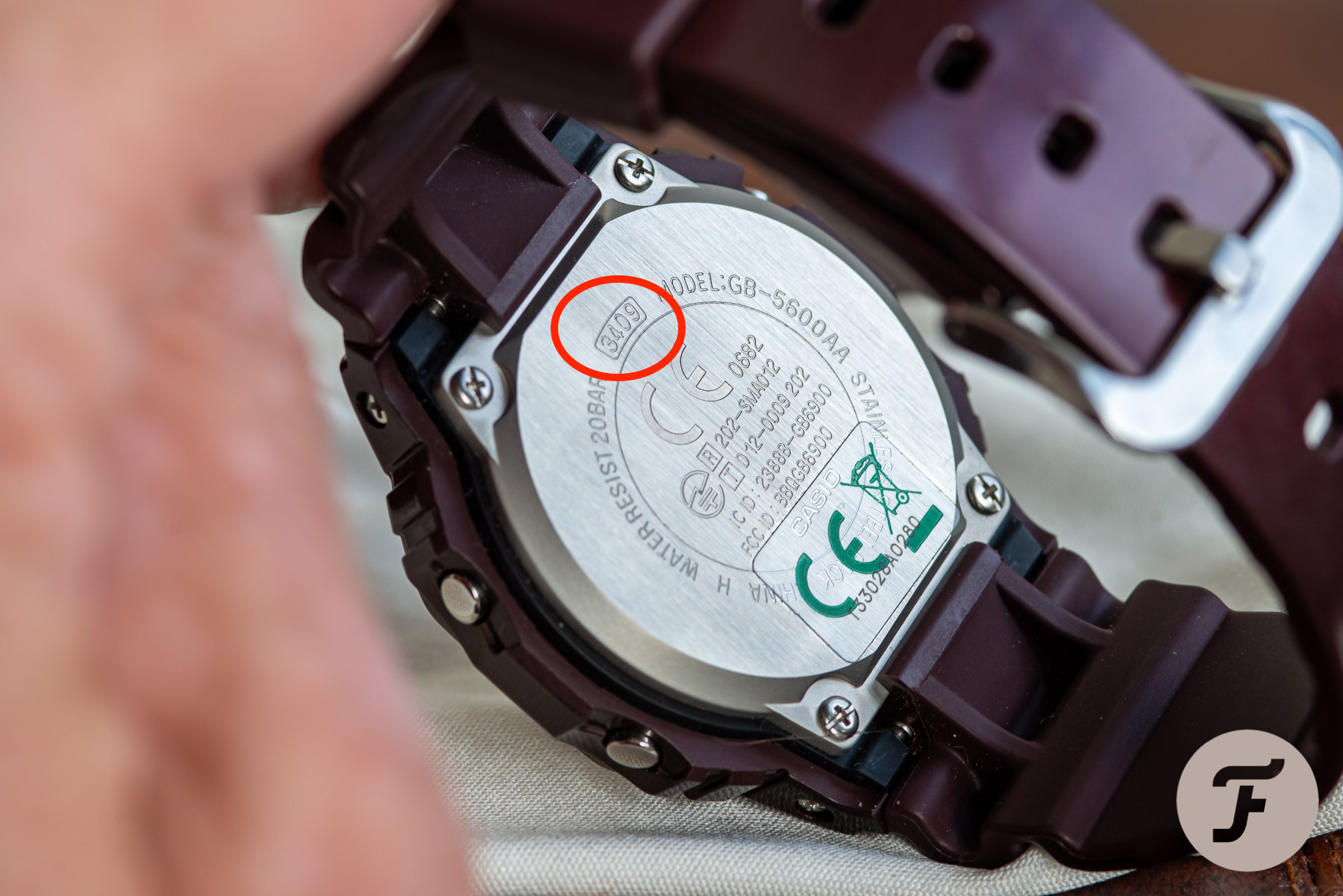 Module number indication on the case back

Some flaws and thoughts

Of course, there were some flaws as well. That’s not surprising given it was the first attempt. The fact that the Bluetooth connection could only be maintained while the app was actually running was the main objection I had with this generation. No more notifications will be sent if the app closes (unintentionally, perhaps). Because the Bluetooth connection to the phone is not lost — there’s just no data transfer possible — the Bluetooth logo is still shown in the watch’s display for quite some time. You’re not immediately notified of the broken connection.

I think it’s a pity that this module isn’t solar-charged, although I wouldn’t call it a flaw. All current radio-controlled modules are though. Neither is module 3409 equipped with Multi-Band reception. So its automatic time setting has to rely entirely on the data from a linked smartphone. A link that, unfortunately, from time to time gets lost and is not always automatically found again. 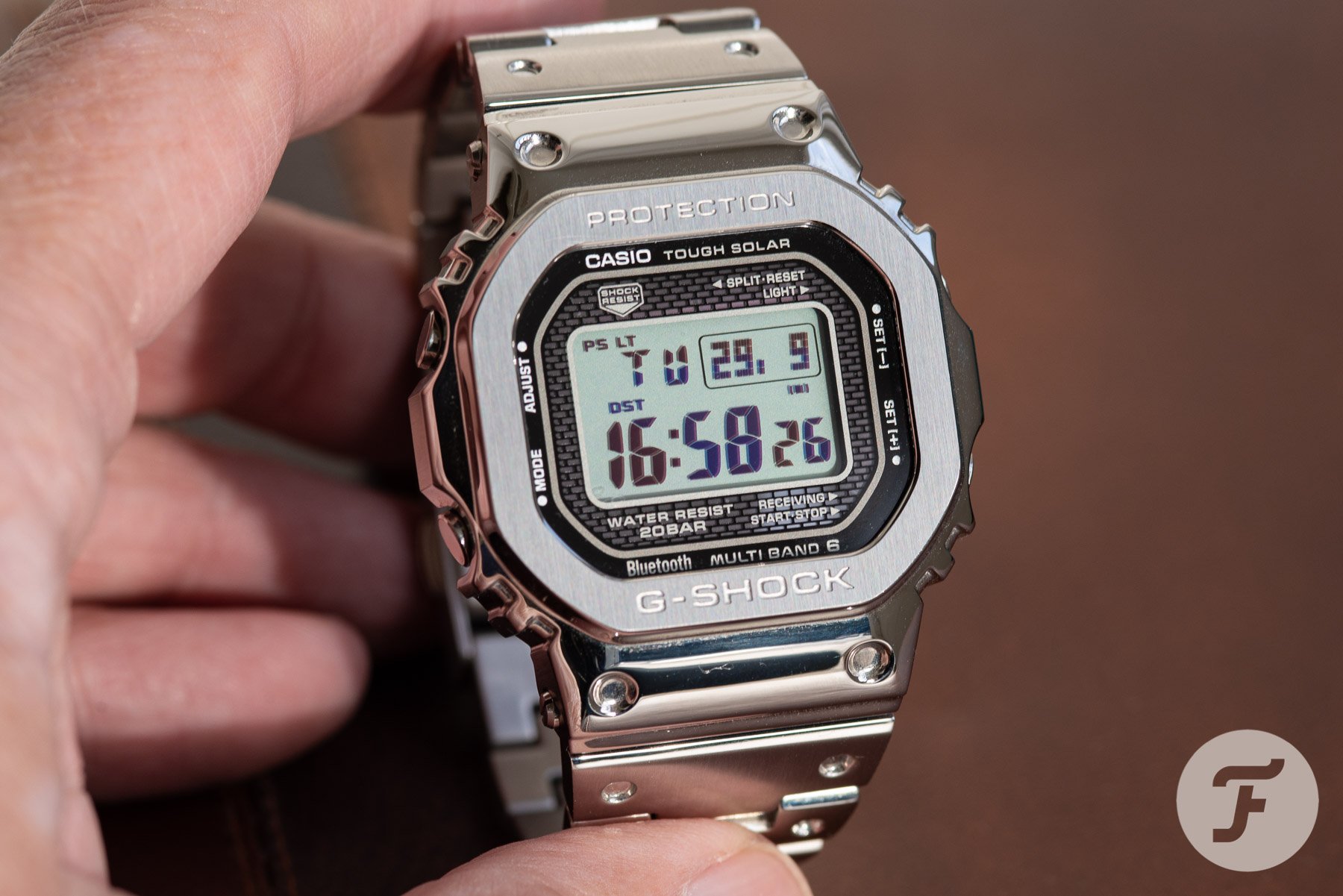 The current flagship module for Squares

So there was some room for improvement, and here’s how Casio chose to effectuate that. In fact, the brand took a totally different approach. Obviously, one of the main concerns of the early Bluetooth connected models was the permanent connection to a smartphone. Let’s be honest, the need for an app to run permanently on your phone practically isn’t very realistic. Specifically, when a re-connect often has to be made manually. The watch doesn’t automatically re-connect to your phone, a user-initiated action is needed for that. Plus, a permanent Bluetooth connection will drain the watch’s battery quite significantly.

So, with the latest Bluetooth connected module, Casio chose not to have a permanent Bluetooth connection. The connection only is needed when something has to be set or changed at the watch. Let’s start to explain how (automatic) time setting is done. With Casio’s latest Bluetooth connected module (3459/3461) you can configure watch settings to connect with a phone at preset times each day and adjust its time settings in accordance with information obtained from an online time server. Once the time adjustment is completed the connection is automatically terminated.

That’s pretty neat, isn’t it? Of course, situations exist in which a connection can’t be made. Your phone could be out of reach, or the connection is troubled by radio interference. But there’s a more important reason for the automatic connection not to work. The automatic connection, again, needs the app to be at least running in the background on your smartphone. 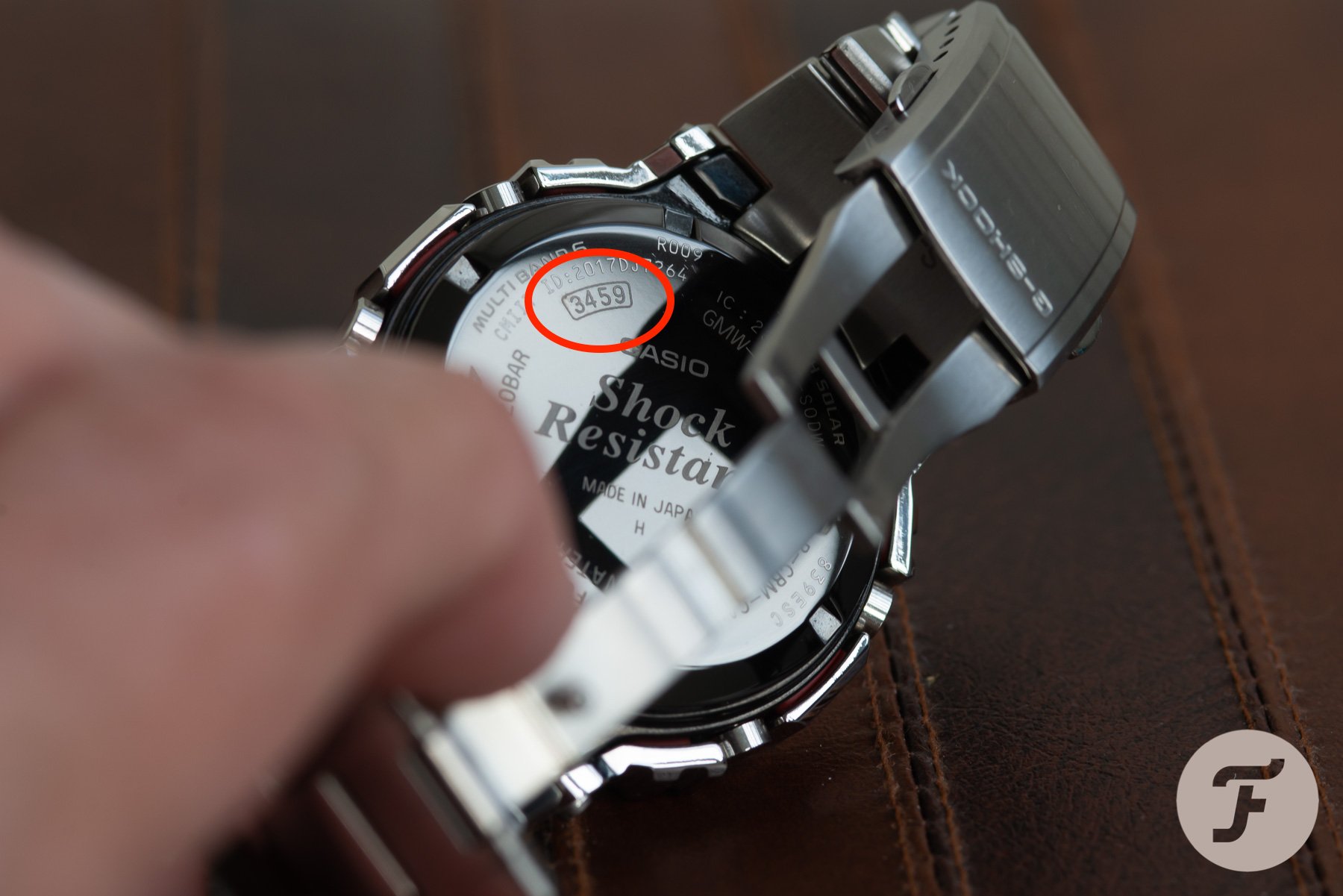 Module number indication on the case back

But not to worry. Contrary to the former Bluetooth models, the new ones are additionally equipped with Multi-Band 6 reception. If your phone can’t be contacted by the watch at one point, it’ll look for a radio signal to adjust the time if needed. And, the new modules are not only Multi-Band 6 equipped, but they’re also solar-powered. A huge leap forward compared to the former Bluetooth module. In my opinion, it proves that Multi-Band 6 still is an important feature.

What else is new? First, the new approach of using smartphone data needed a new app. An app focused on sending data to the watch and then disconnecting. And although the new approach provides some new features, unfortunately, many of the old ones are lost.

Storing a point memory — storage of your location drawn from the phone’s GPS — is one of the new features. Just one short push of a button is sufficient. The location is then found and stored in the app. But again, for this to work, the app needs to be running on your phone in the background. 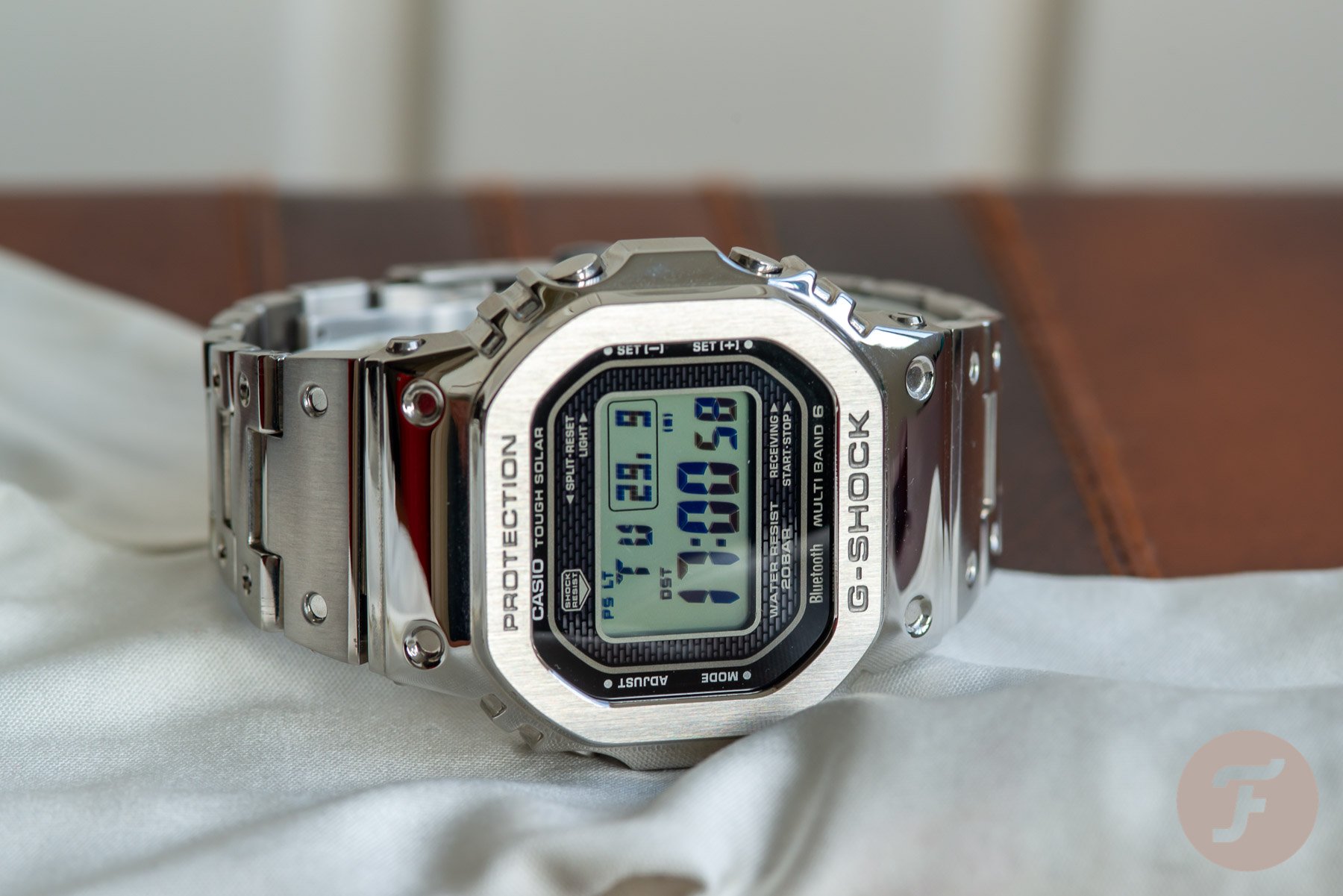 Alarms are set in the app and then transferred to the watch. The same is possible with timers and reminders. Reminders show on a daily, weekly, monthly, or even yearly basis. They neatly scroll as text in your G-Shock’s display, guided by a remarkable flashing red light.

Lost were all real-time smartphone notifications. Phone ringing, email and message receipts, calendar entries, and reminders. And to me, that’s a big loss. Well, it would have been a big loss if it had worked well on the former Bluetooth modules, but — due to connection — it never really realized its massive potential.

In Casio’s second and latest G-Shock Square Bluetooth module we, unfortunately, lost some useful functions. Fortunately, others arrived as well. In my opinion, the current module — including the belonging app — operates more smoothly than the old one. That is something that has been achieved by the new, not-always-connected, approach. But still, for the automatic time-setting, plus for the position memory, the app on your smartphone has to be running. A situation that I can’t find very practical. 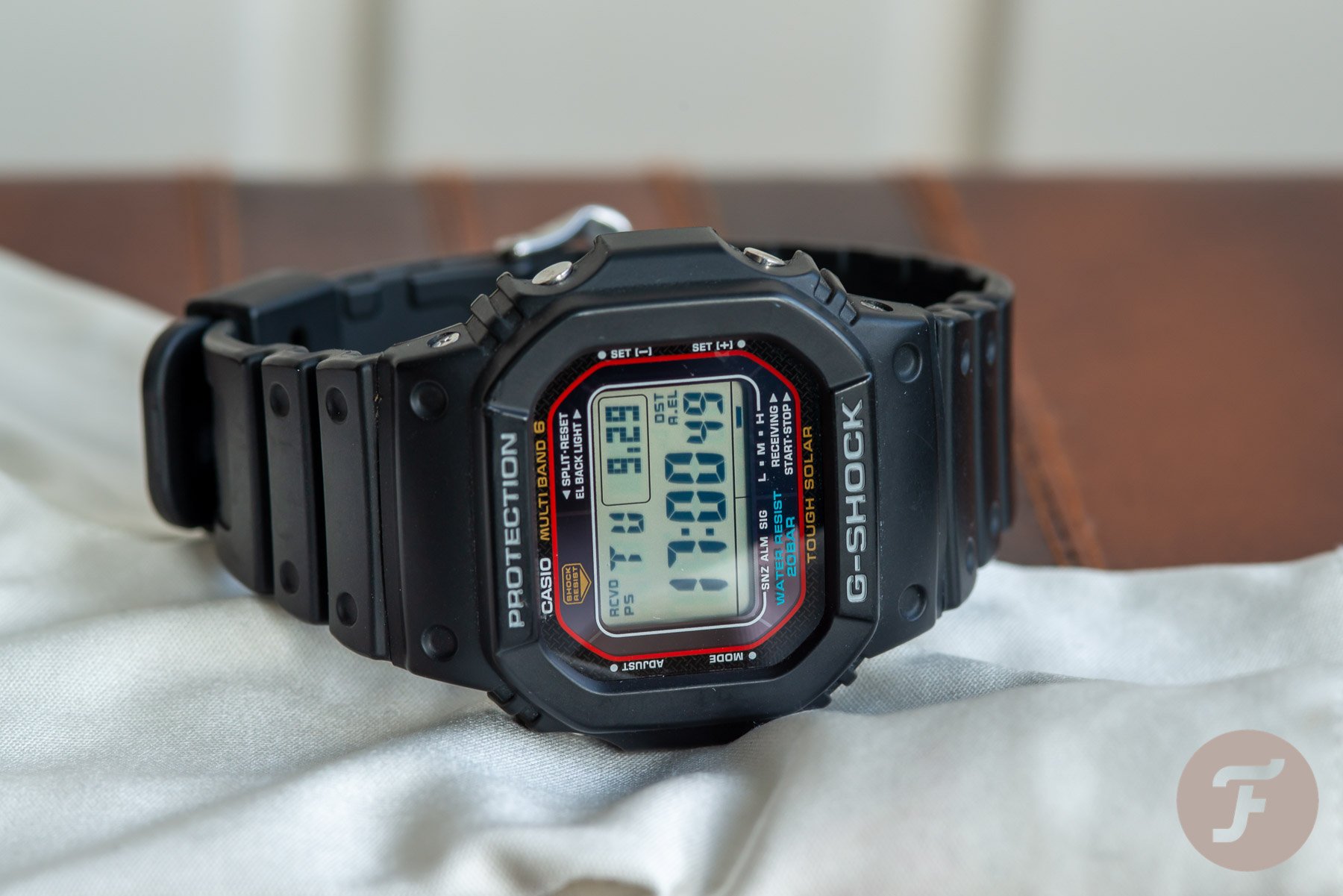 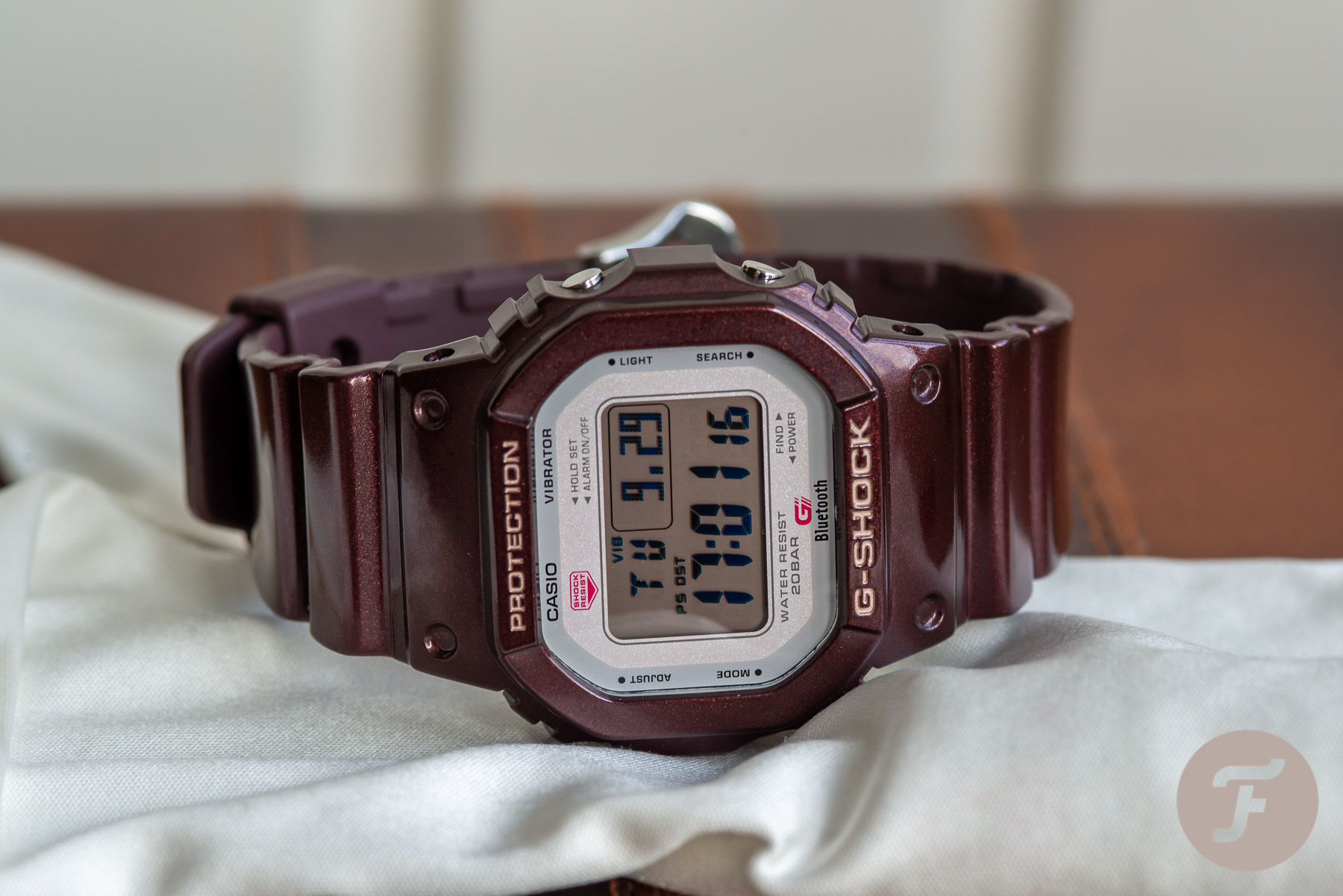 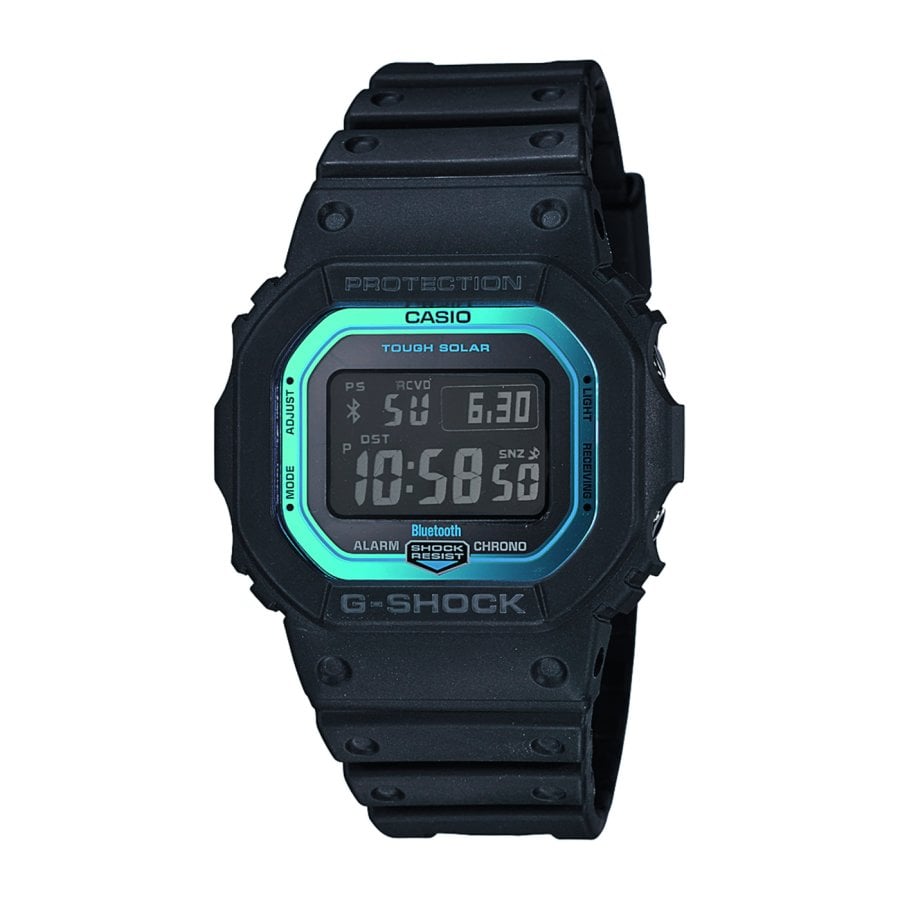 Your choice will probably more depend on where you are located. If you’re out of reach of one of the 6 radio transmitters, a Mult-Band 6 module is of no use to you for automatic time-setting. In that case, a Bluetooth connected watch might be the way to go. Or you could set your watch manually of course (but who wants to do that in 2020!).

Personally, the extra functions on the Bluetooth-connected module are not crucial to me. I must admit that, after two years of ownership, I hardly use them. Changing your home-time with one of the other cities available in the world-time function is handy and easy. Storing a location is fun but hardly necessary nor useful on a daily basis. A “regular” Multi-Band 6/solar-powered module features alarms and timers as well (which I hardly use anyhow). 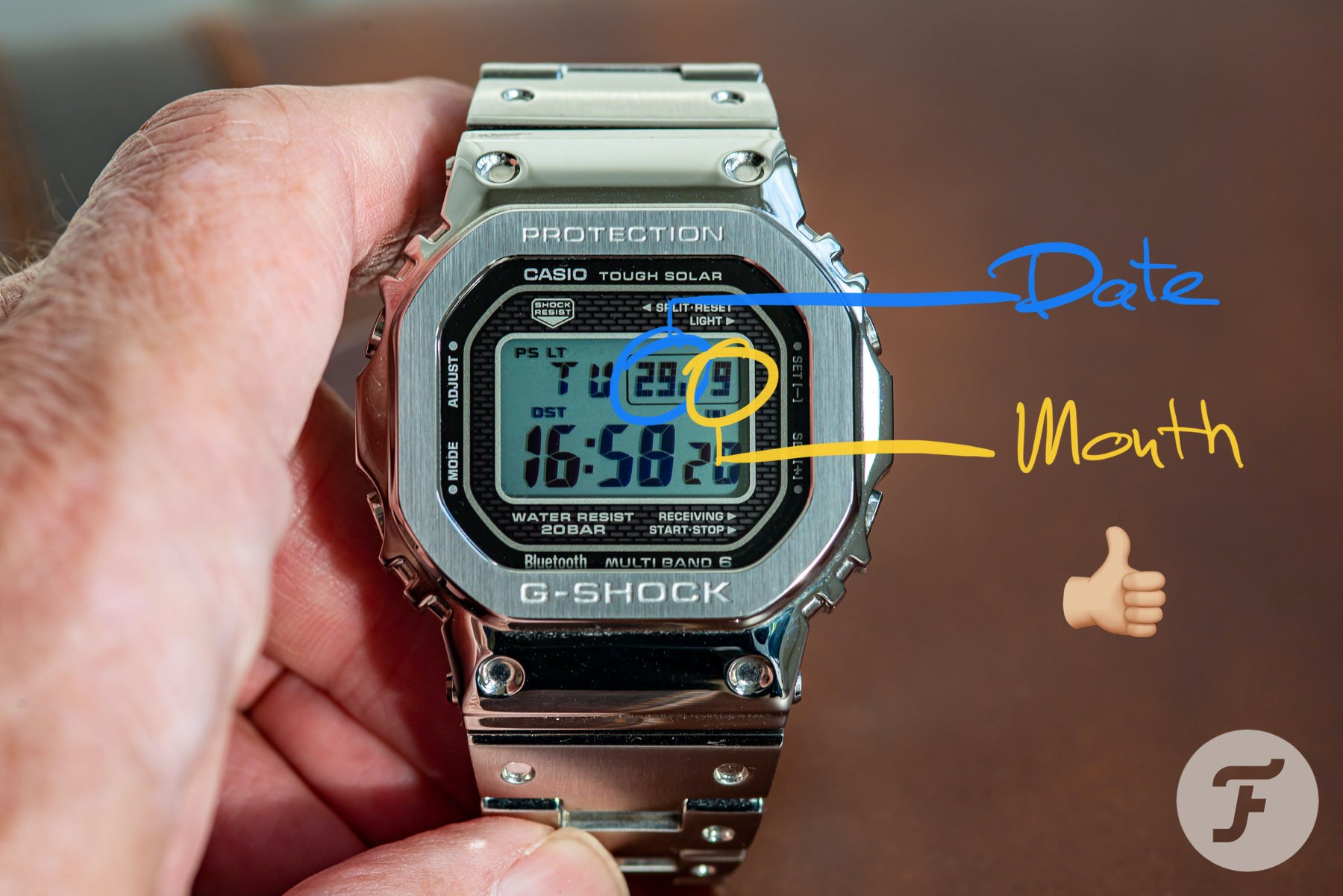 But here’s one thing that I absolutely adore about the latest Bluetooth connected modules. And that’s the possibility to display the date and month the European way. Every other G-Shock Square module so far shows MM/DD, but the new Bluetooth ones are able to do DD/MM. For this alone, I prefer the 3459/3461 module over the early Bluetooth 3409 or radio-controlled-only ones like the 3159 module.

If you are a G-Shock fan (like the Fratello team), I’m sure you gonna love the extensive ShockBase G-Shock database. 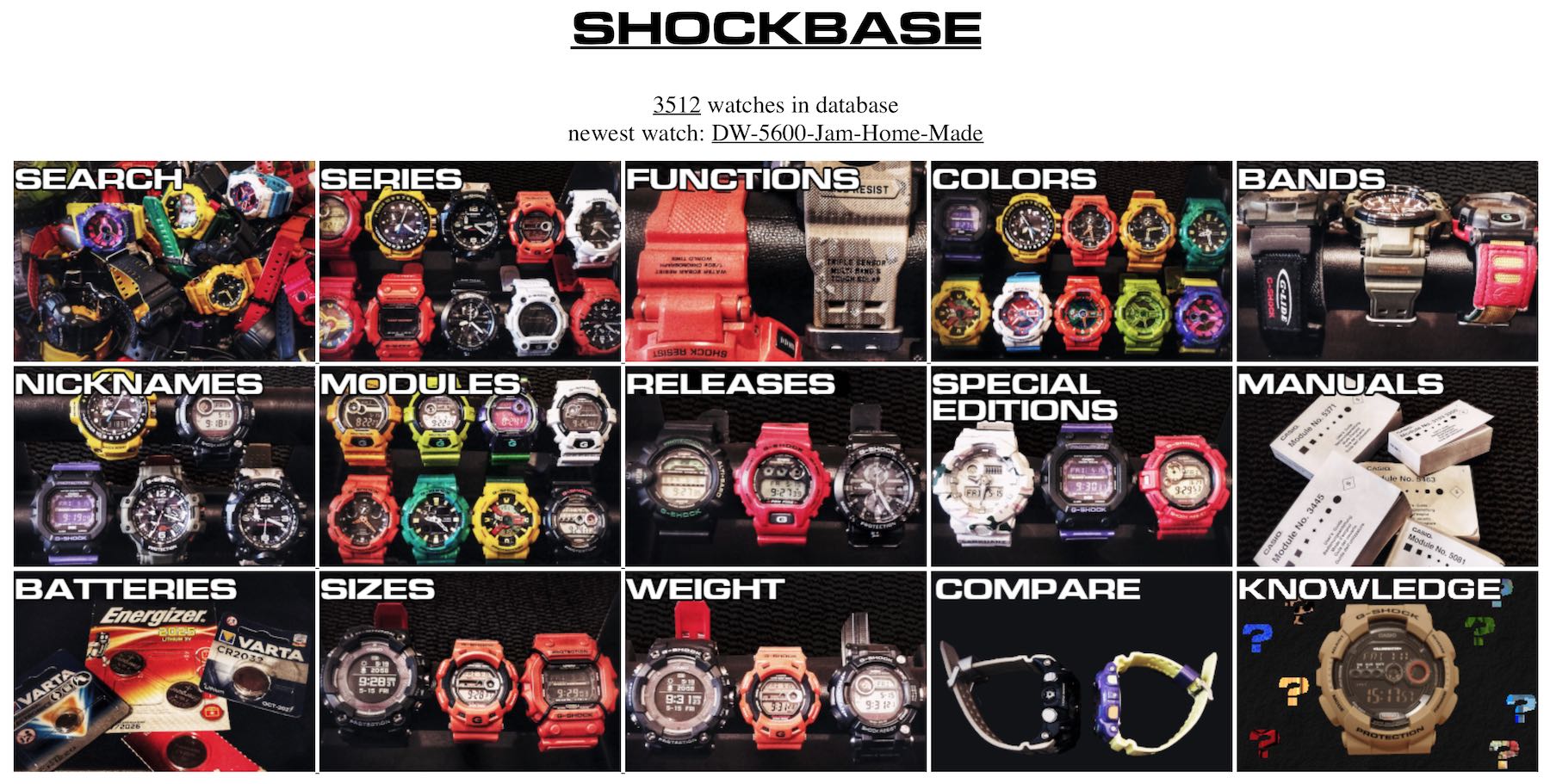 Series, modules, sizes, and functions can be searched and selected. Battery information plus access to all manuals are present as well. There’s even a list of nicknames. The owner, Konstantin, allowed me to include a link to his website, so here it is, enjoy! www.shockbase.org

Hot Topics
Introducing: The New Seamaster Professional 300M 60 Years Of Bond — With A Special Animated Case Back
105 comments
Are You Still After An Omega × Swatch MoonSwatch?
85 comments
It’s Time To Invest In A Dress Watch — Our Picks From Breguet, Omega, Grand Seiko, And More
72 comments
The Rolex Waitlist Conundrum — How Much Will The Price Of Your Watch Increase While You Wait?
50 comments
The Best Omega Speedmaster Watches Of 2022
40 comments
Popular
Two Patek Philippe Nautilus Watches: 3700/1A Versus 5711/1A
Robert-Jan Broer
16
You Asked Us: Rolex Submariner vs Omega Seamaster
Robert-Jan Broer
24
Hands-On Longines Legend Diver in Black Ref. L3.774.2.50.9
Robert-Jan Broer
1