Reborn brands are all the rage these days. In fact, they’ve been popping up apace for the best part of a decade. However, it isn’t so common they meet with long-term success. By now, you all know about Czapek. You’ve probably heard of Vertex and Fears (especially if you, like me, spend a lot of time in England). But have you heard of Charles Girardier? No? We hadn’t either… We went along to a meeting set up by my former contact at Schwarz Etienne, Estelle d’Hubert.

In 2018, Patrick A. Ulm visited the museum of Agatha Christie (no joke). There he found an old pocket watch by Girardier. His research continued and he decided the name should be brought back to life. While it sounds like an origin story more akin to one of Christie’s novels than Geneva Watch Days, it really is true. 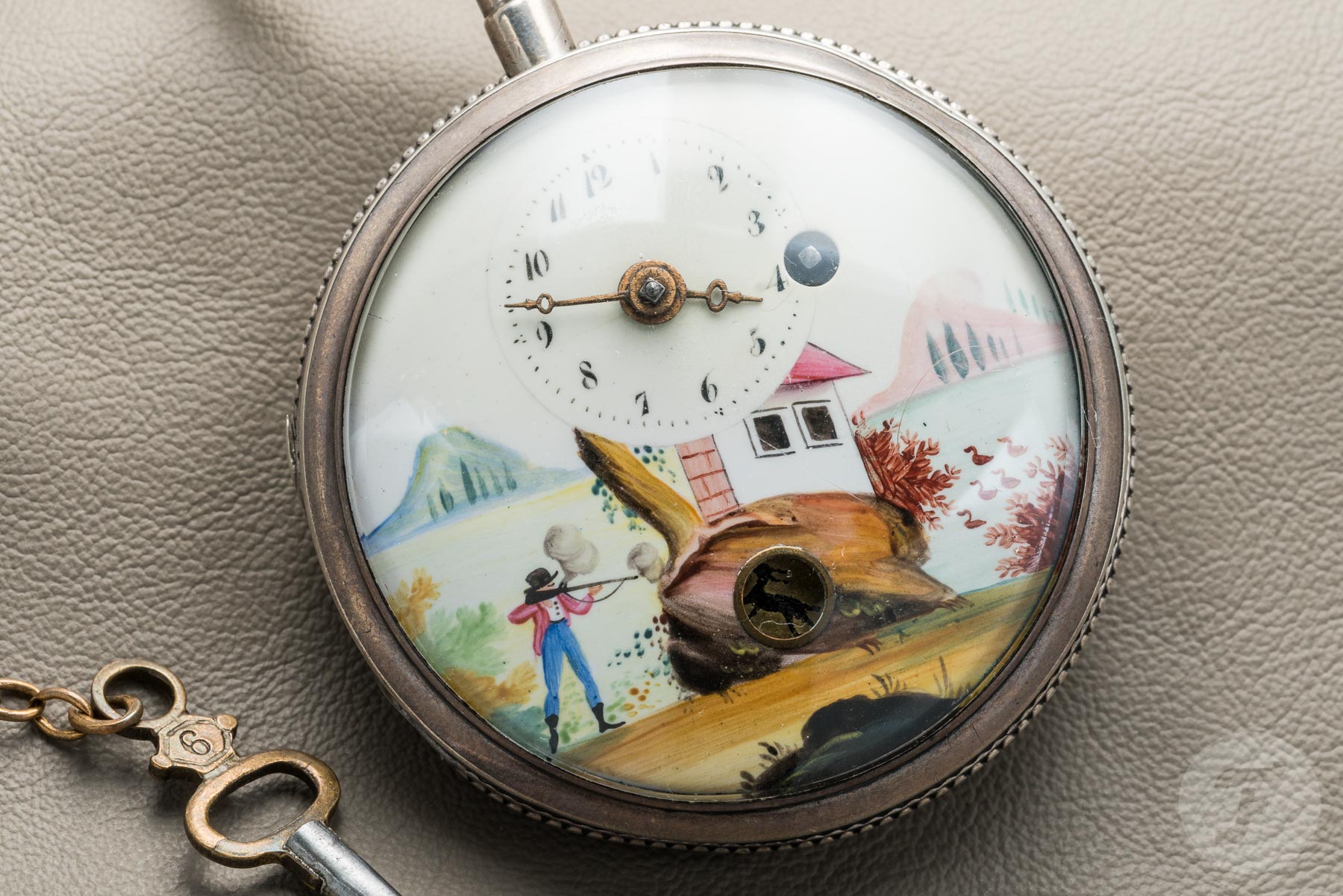 Three years later, Ulm won the GPHG award for the Charles Girardier 1780, beating event stalwarts like Van Cleef, Bvlgari, Piaget, Louis Vuitton, and Jacob & Co. to the title. If it was a shock victory, Ulm didn’t show it to the crowd of red balloons that gamely cheered on his success in the absence of a real life human audience due to COVID measures. 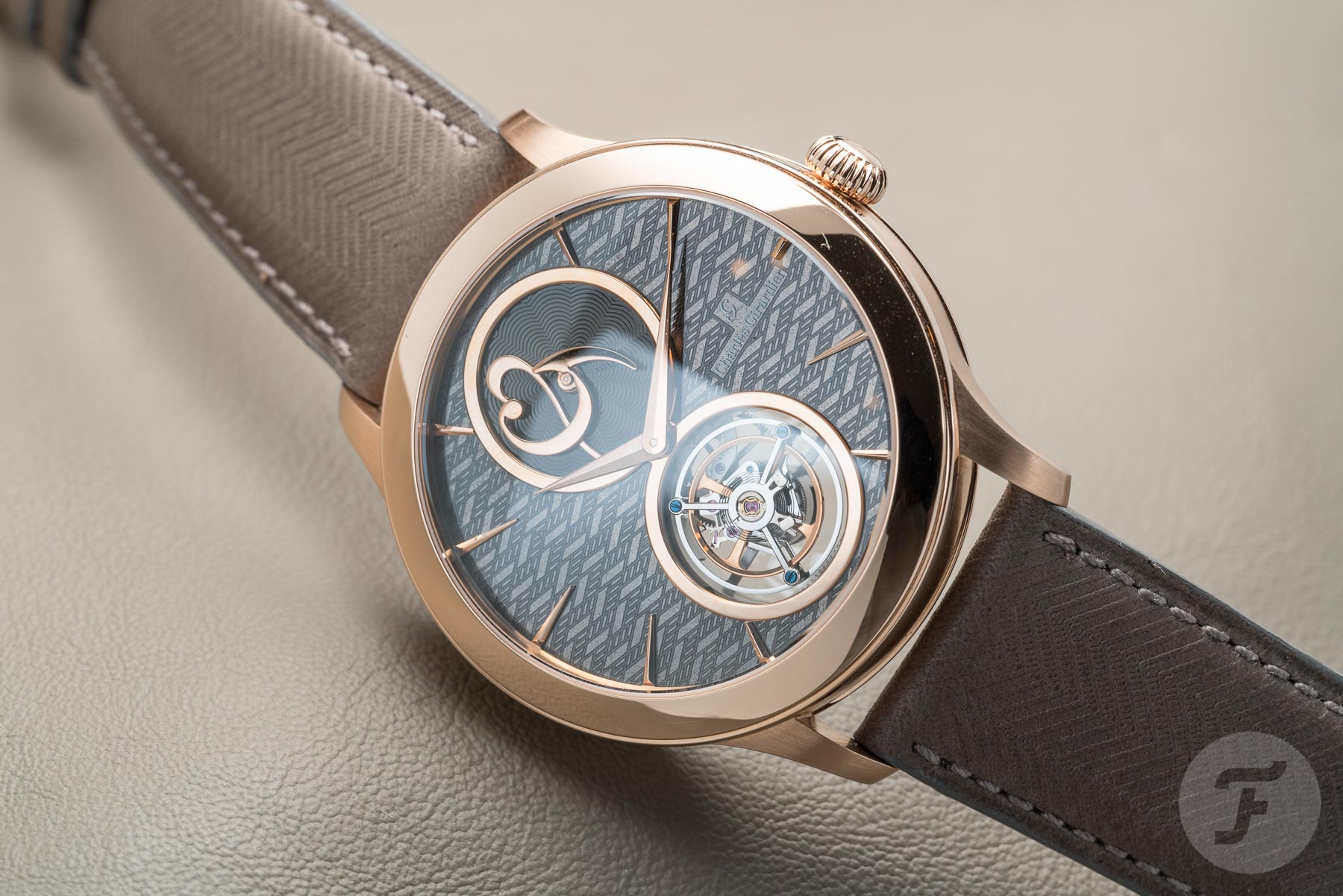 Inspired by the success of the GPHG, Charles Girardier decided to enter a special, piece unique in the Only Watch Auction. The auction will be held in Geneva this November (check out our round-up here). First, though, the special watch must go on a world tour, taking in Dubai, Singapore, Hong Kong, Tokyo, and Maccau. 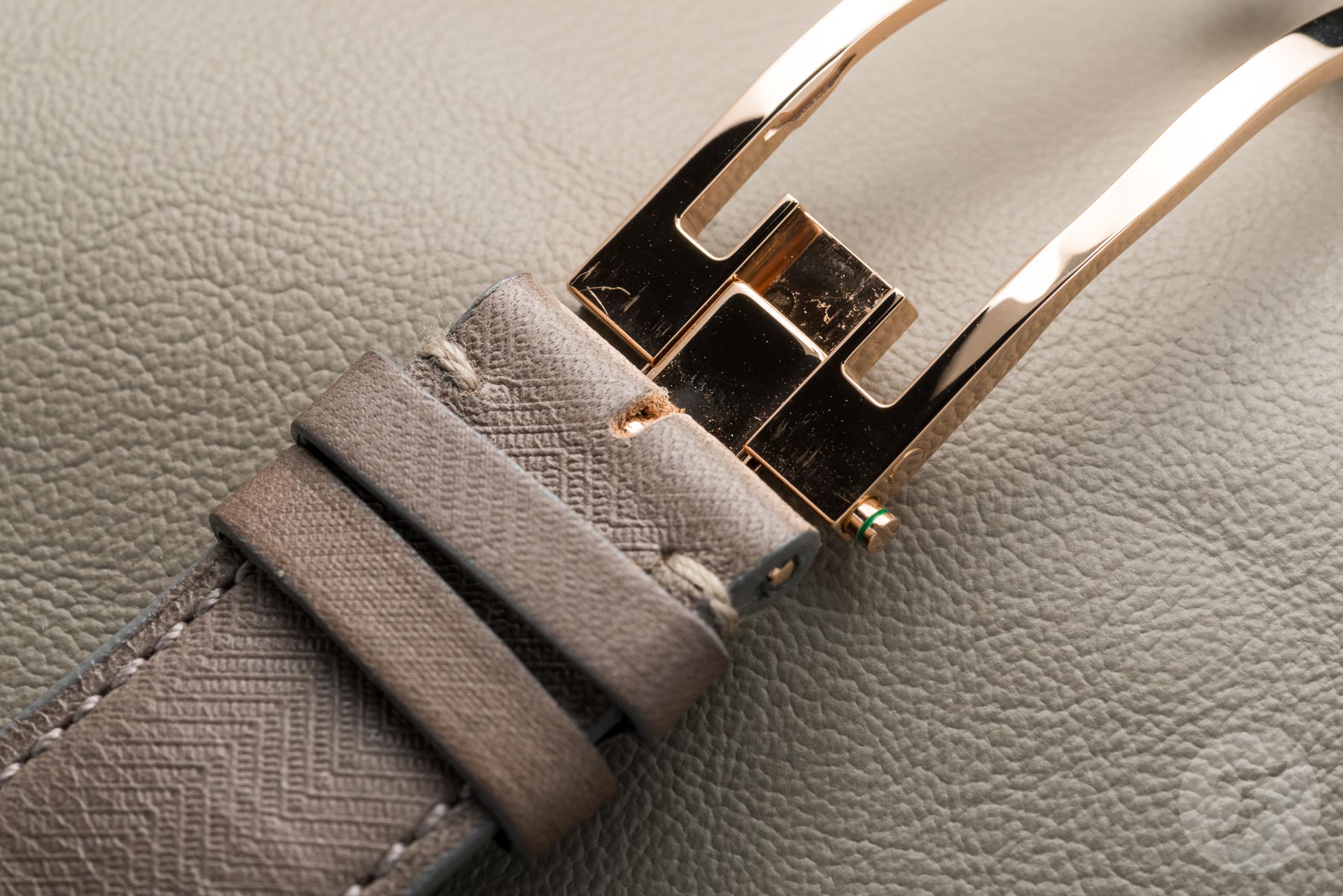 An innovative microadjustment buckle system with a green “on” and red “off” indicator.

Considering production began in November 2020, the brand has done well getting a range together in time for this fair. Currently, the watches are sold in the first (and currently only) point of sale in St. Tropez. Frojo (one of the two major retailers in St. Tropez) debuted the brand earlier this year. 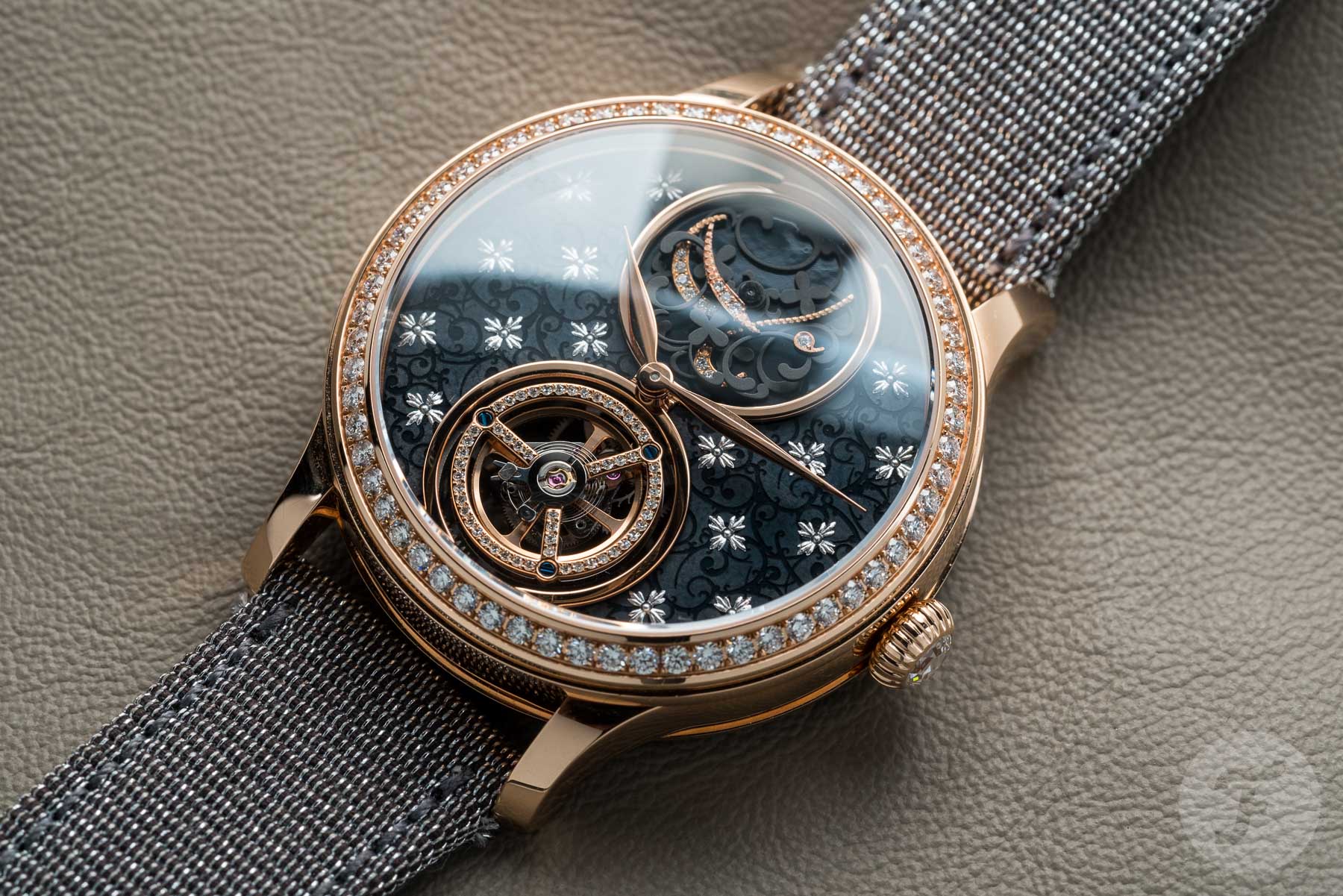 Firing up the engines

Enamel is a key element of the design, as is the playfulness communicated through the automatons and creative shapes shifting around on the dial. The brand looks at the unusual design of its movements as a “dual engine”. Of course, the gravity-controlled animated monogram at 12 o’clock, which you can actually have replaced with your own monogram, requires no power to function. 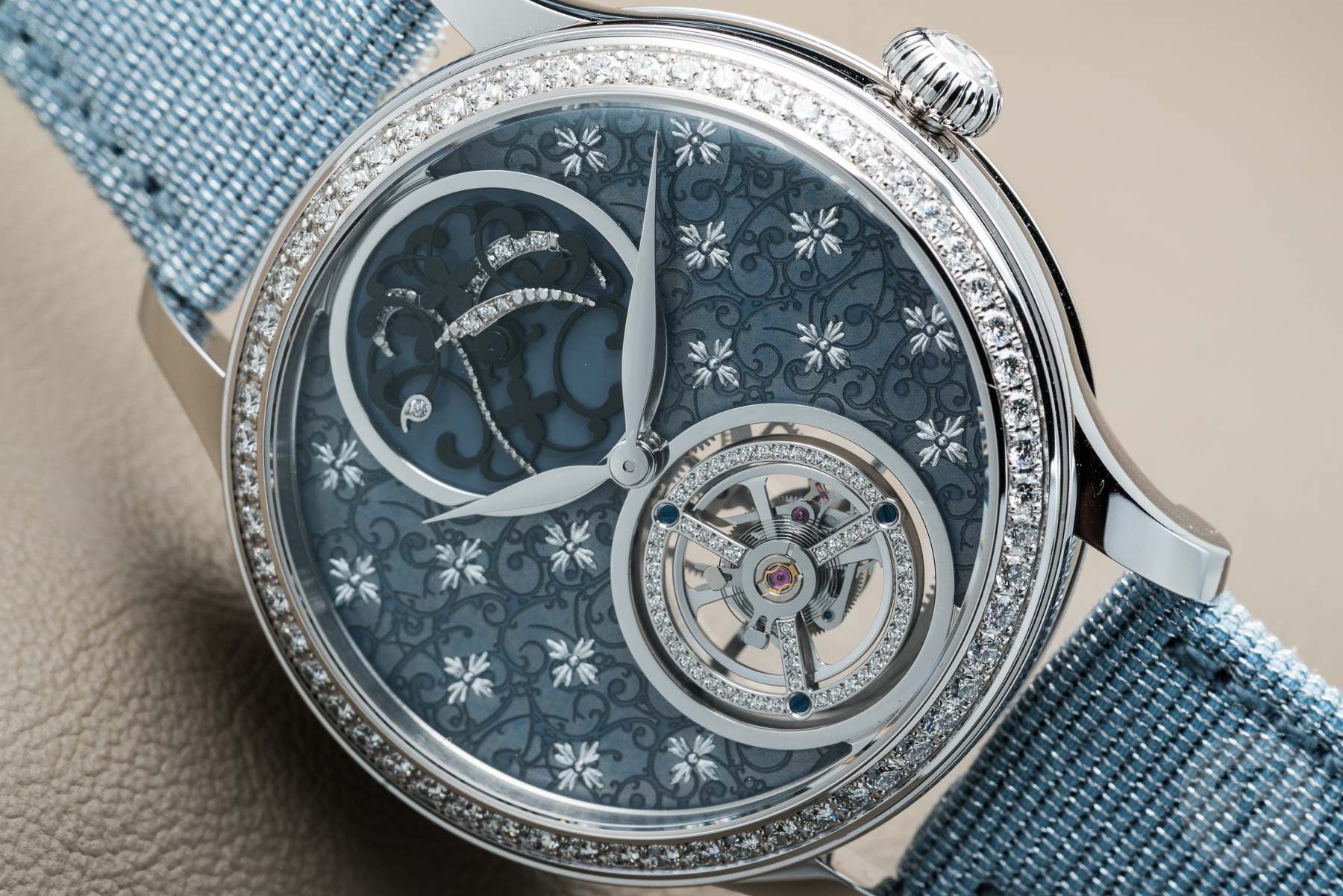 Instead, it is controlled by a rotor weight and reverser system enabling the two separate elements of the monogram to spin in different directions. The effect is entertaining, and certainly adds to the eye-catching appeal of the watches when viewed from across a room. 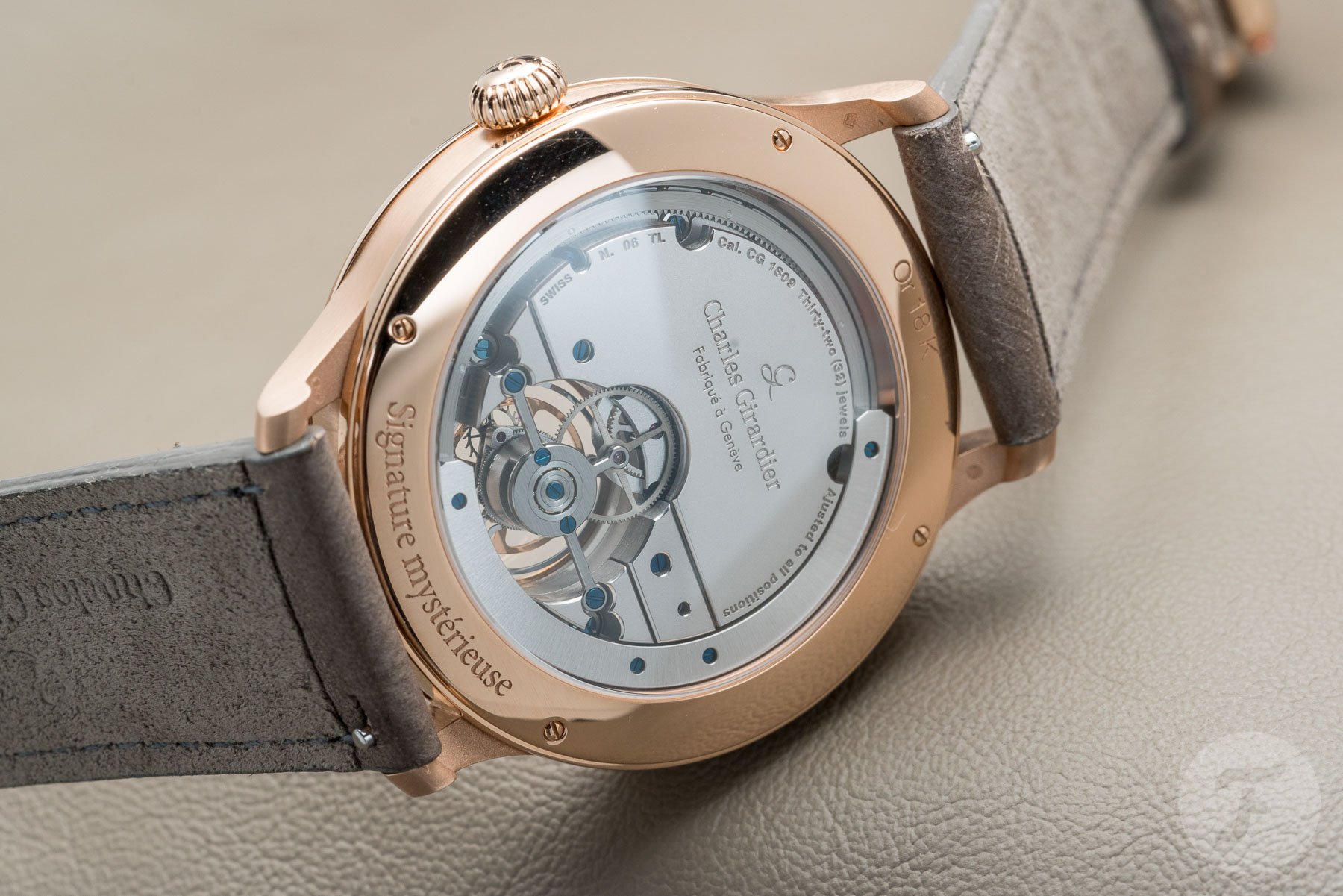 In addition to the customizable monogram, dial colors can also be changed as per customers’ requests. Furthermore, the shape of the shape of “paillons” (those little golden saltflowers you can see in the picture above) can also be changed. Speaking of the dials, we should point out that enamelling is one of the band’s key design tenets. 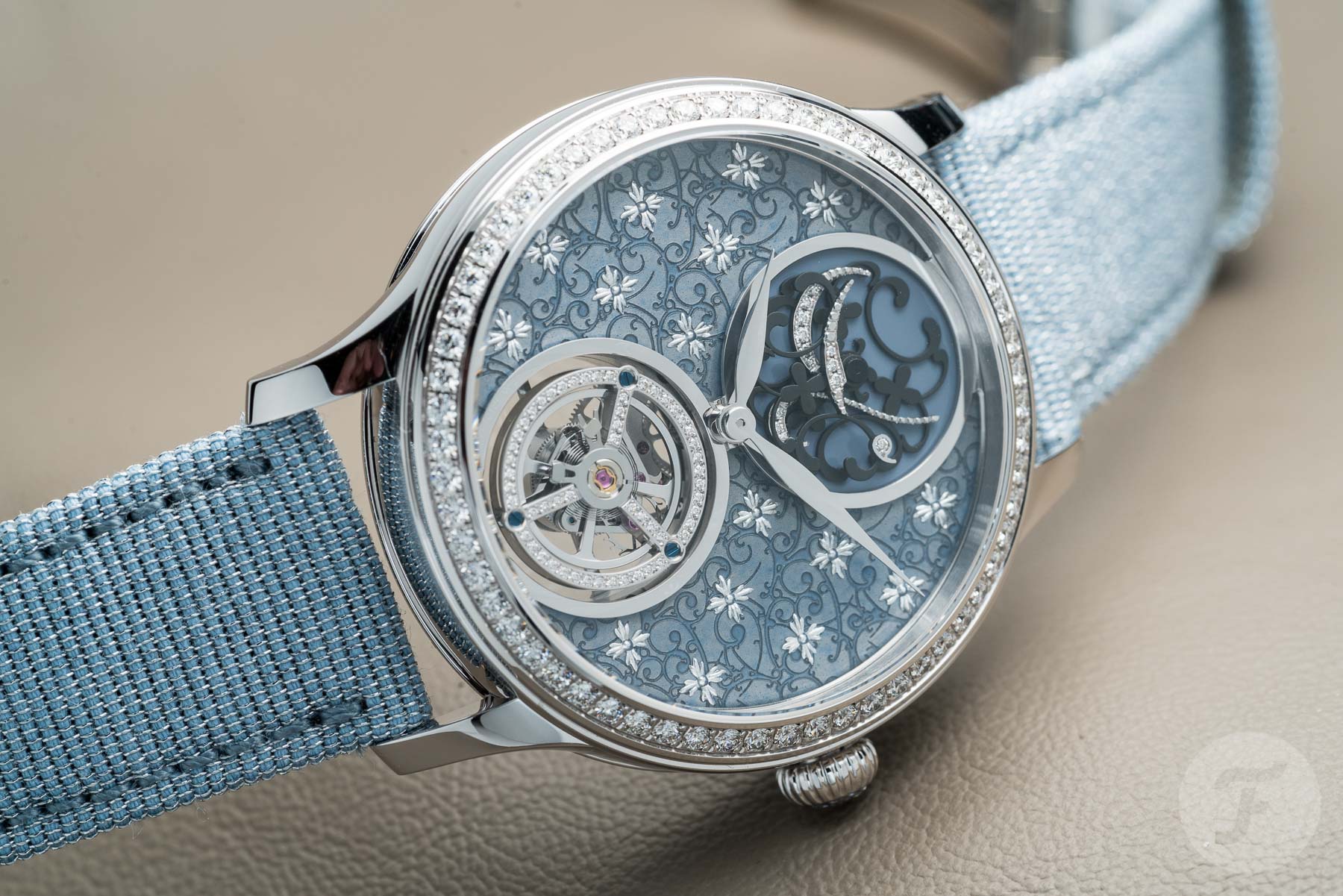 Multiple techniques are used by Charles Girardier’s craftspeople, but the most common one we saw today was the use of Grand Feu enamel. An 8.8g gold dial blank, which is mirrored by the golden dial and the golden folding clasp, is first laser engraved with a design. Color is then applied in the traditional method, with eight rounds of firing at 800 degrees, topped with the “fondant” layer (which is the transparent top layer that finishes the process and adds that impressive depth to grand feu dials we’re used to seeing). Whenever solid gold is involved, weight is always something to consider. The 1809 in 41mm weighs 116g all told, the smaller version is 37mm and 76g. 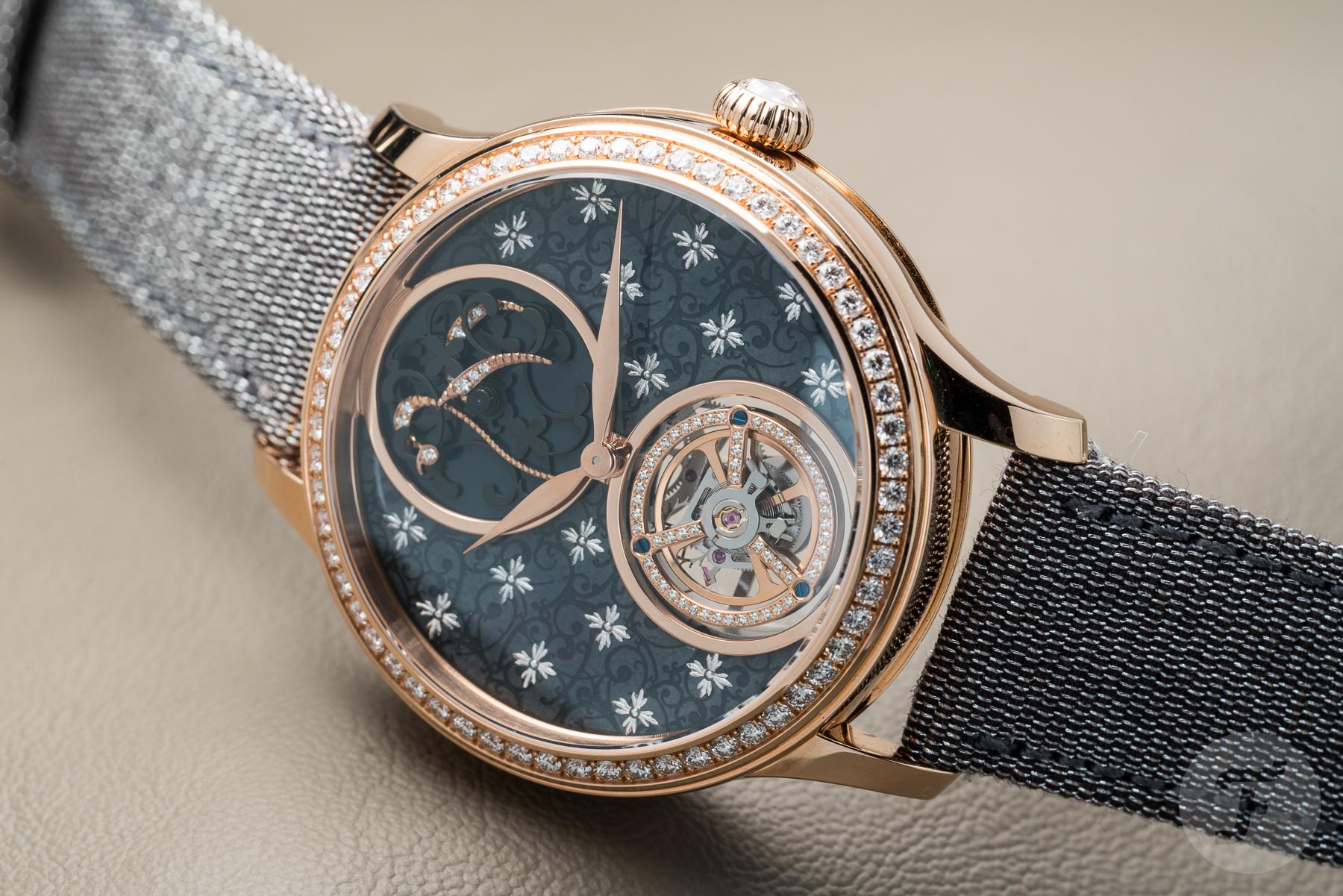 The second type of enameling is employed by the brand integrates the use of “paillons” or foil stripes that sit atop the color of the Grand Feu and beneath the fondant. Paillons are made from either silver (.999) or 24-karat gold. This unusual technique is really a sight to behold. The paillons appear to be floating above the intricate dial surface. These processes are conducted by GVA, a specialist company in Geneva. 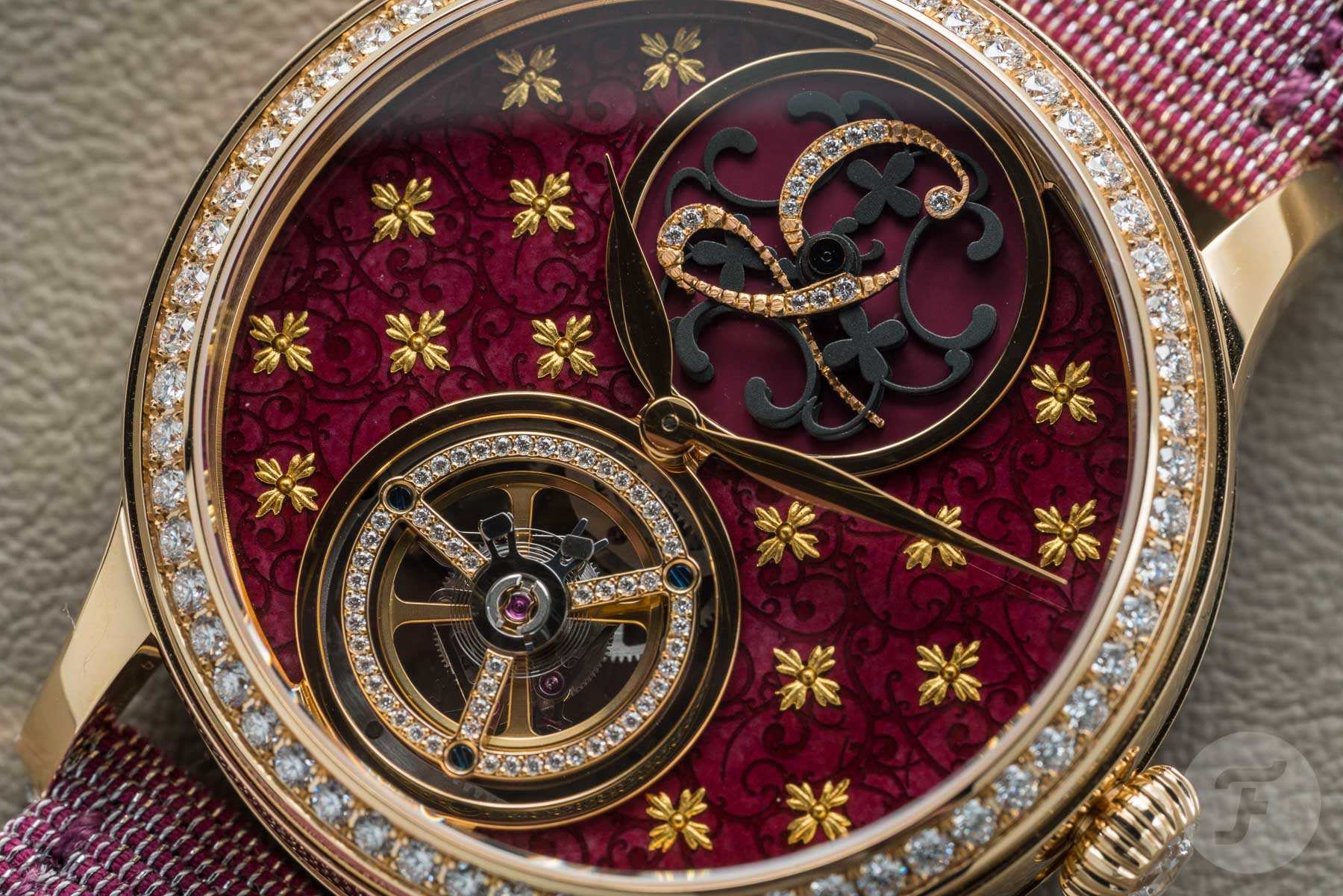 The movements (in fact everything according to the brand) are also made in Geneva. Built for the brand by Timeless Manufacture (which also handles the diamond setting), these peripheral rotor movements contain 308 components. The peripheral rotor (of which I am a particular fan) uses just one ball bearing, which vastly reduces the rattle generally associated with this style of rotor. Overall, I was impressed with the quality of the product and the whimsy of the “automaton”. I would imagine that with this level of customization the brand will find its feet among the ultra-luxury jet set. However, prices in excess of 80K for the diamond-encrusted models will mean these pieces exist rarely in the wild. To learn more about this new venture, check out the brand’s official website here.

Hot Topics
Introducing: The New Seamaster Professional 300M 60 Years Of Bond — With A Special Animated Case Back
100 comments
It’s Time To Invest In A Dress Watch — Our Picks From Breguet, Omega, Grand Seiko, And More
67 comments
Are You Still After An Omega × Swatch MoonSwatch?
65 comments
Sunday Morning Showdown: The Tudor Pelagos Provocation — Pelagos Vs. Pelagos 39
55 comments
The Rolex Waitlist Conundrum — How Much Will The Price Of Your Watch Increase While You Wait?
48 comments
Popular
Speedy Tuesday – Olympic Games 2020 Speedmaster For the Japan Market
Robert-Jan Broer
3
Top 10 Best Watch Bracelets
Robert-Jan Broer
59
Hands-On With The Patek Philippe Nautilus 5740/1G
Robert-Jan Broer
2