If you read my story a couple of weeks ago on the brilliant Seiko Credor Phoenix chronograph, you might think I’m mad. And yes, I also recently penned a story on consolidating a collection, based on my own process of “downsizing”. Then why am I on a spending spree the week after, buying not one, but TWO off-the-beaten-path Credors? I didn’t mean to, honestly, but the wishy-washy working title for this story says it all. It’s written on our content schedule as “Time Only Credor Dress/field watch”. The millennial-vintage 38mm Credor Phoenix is impossible to categorize, and therein lies its charm.

The 38mm Credor Phoenix is one of those watches that you discover on Chrono 24, go “Oh, now that’s nice!” and then slip into your unconscious watch box. Why? Because it is very uncommon and not present on Instagram or watch media. The hashtag #seikoalpinist has 52.5K hits, while #credorphoenix has 191. No, I don’t mean 191K. This is simply another gem from the forgotten decade between 1995 and 2005, when watch forums ruled (what are they?). This also makes any Credor Phoenix vary wildly in value, from €1,500 to almost €4,000. 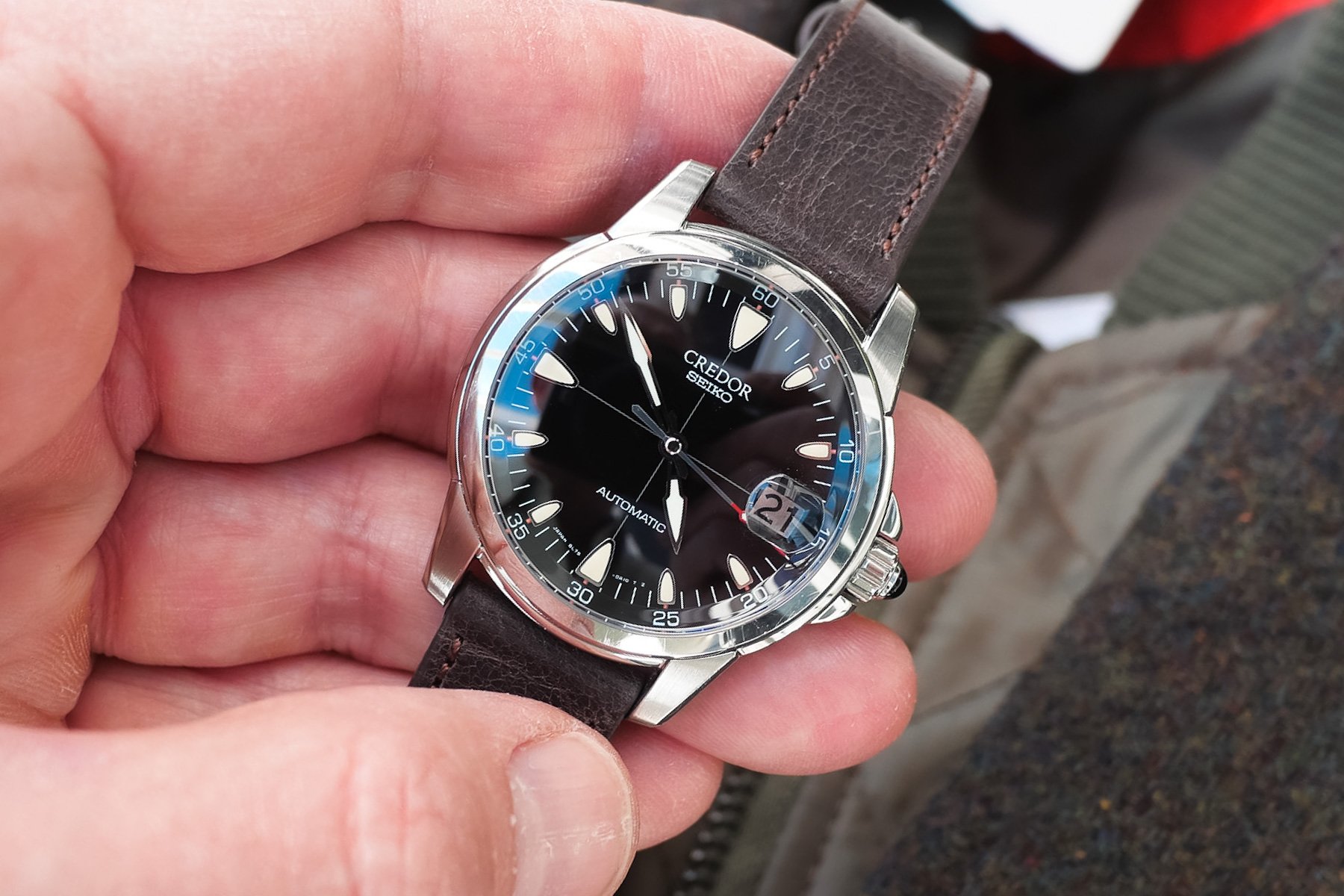 Credor Phoenix GCBR993 — What makes this oddity so tempting?

For one thing, the perfect size of 38mm with a 45mm lug-to-lug makes this pretty irresistible. The last time I spotted it by chance, I actually dug deeper, and a bargain emerged. There was a white-dialed version on eBay for €2,800, and on Chrono24? A badly photographed one at a Tokyo dealer looking rather scratched and forlorn, with box and papers for about €1,500. First off, you cannot haggle with Japanese sellers. Full stop. I inquired whether the dealer could touch up the damaged case and, if so, how much that would cost me. No, I don’t mind careful de-scratching on a low-to-medium value watch. In fact, I don’t enjoy the “lived a full life” look at all on my own wrist (yes, I have bad watch OCD, so sue me). The seller responded that of course, they would do this, and as a reputable Tokyo dealer, would actually include it in the price. 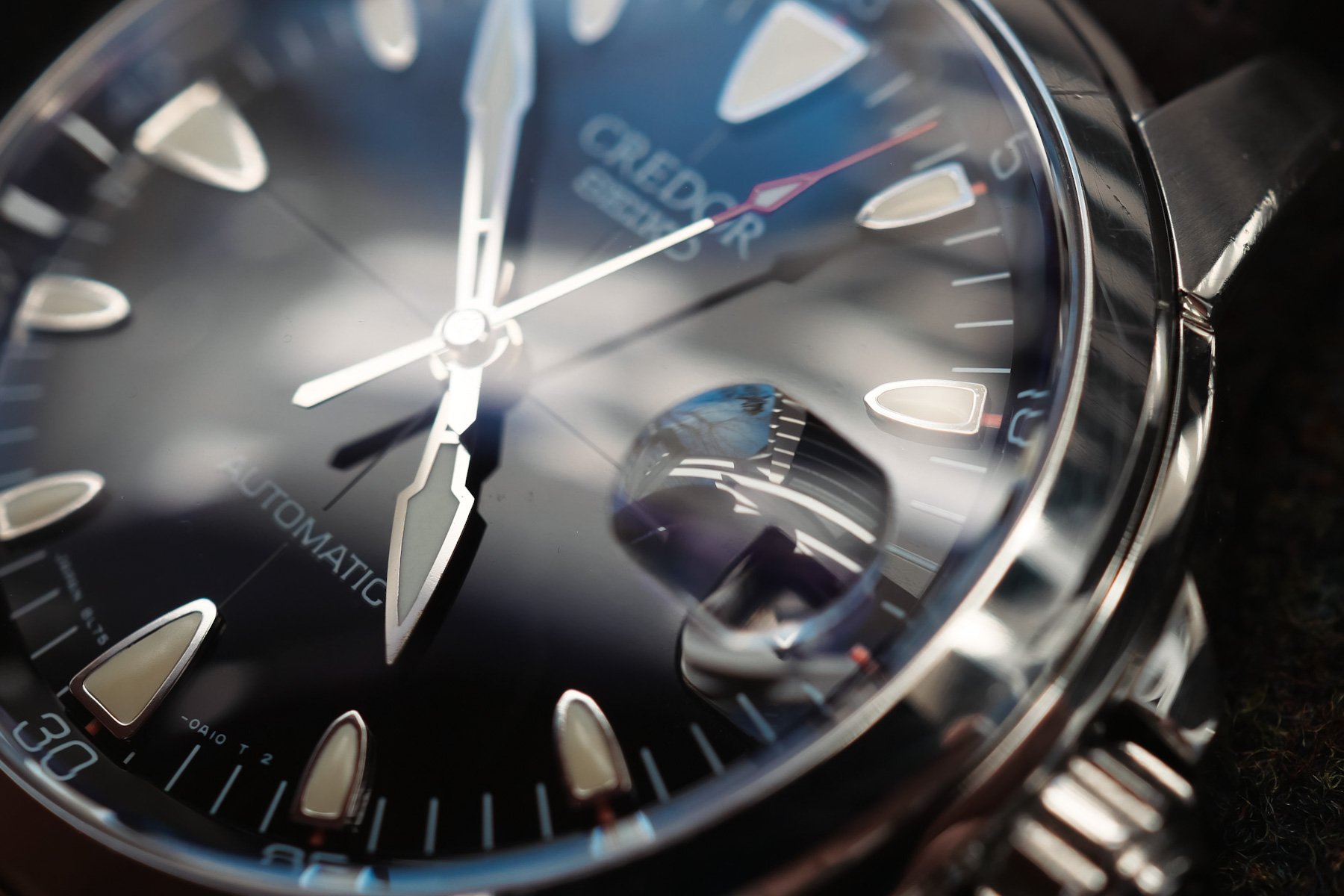 That still doesn’t explain why I bought two Credors

To cut a long story short, damage to the stem was discovered when disassembling the watch for the case repair, and it was shipped to the official Seiko Credor service center for an assessment. This would take 3-4 weeks, with no promise of it being repairable (well, it’s from 2000). Actually, the dealer made it sound rather unlikely. Enter our editor Jorg with a gentle reminder (gee, thanks, Jorg…) that he’d written a story on ’90s Seiko gems including a Credor Phoenix chronograph. Yes, I thought this 38mm beauty was a lost cause, so I got a good Japanese friend to source me the Phoenix Chrono. And as luck would have it, my Tokyo dealer got back to me. Yes, Seiko could do a repair, while Phoenix number 2 was already on its way. Oops! 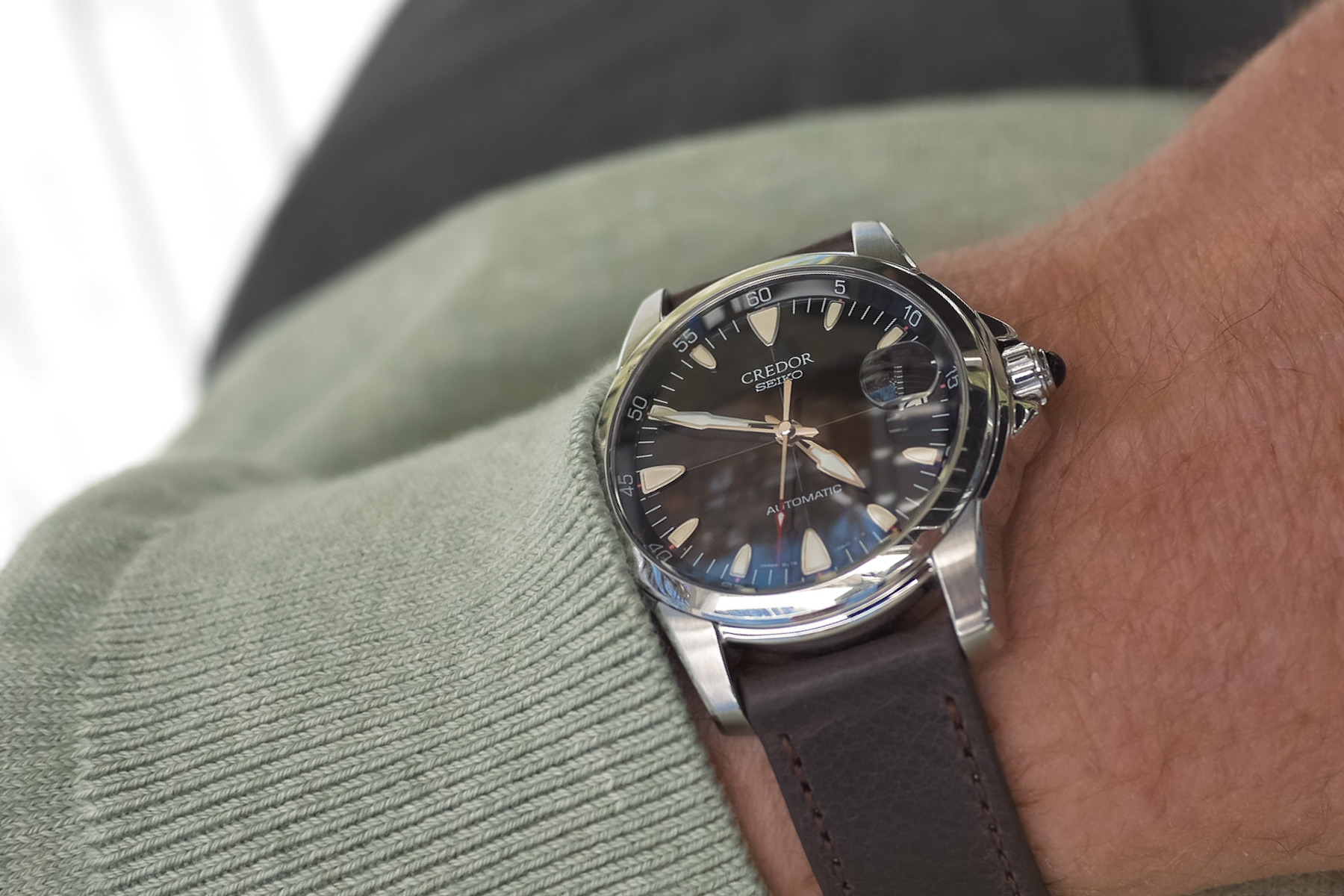 Not only could Credor fix it with new parts, but the dealer would also include this and a full Credor overhaul in the original price. It arrived with a crisp Credor envelope containing a full itemized spec, a guarantee, and a pristinely polished crystal. I have two words for you — buy Japanese!

It arrived on a mad, glossy green crocodile strap underlining the schizophrenia of the watch, but I had a lovely 18mm taupe Pebro number waiting. Strapping it on, I found the 100m depth-rated case even more compact and solid feeling than a Rolex Explorer. The Explorer is really the only comparison, save a deep-luxury version of the Seiko Alpinist. The dial is an inky gloss lacquer, with the odd shark-tooth-shaped indices of the Phoenix series having aged a creamier white than the hands. 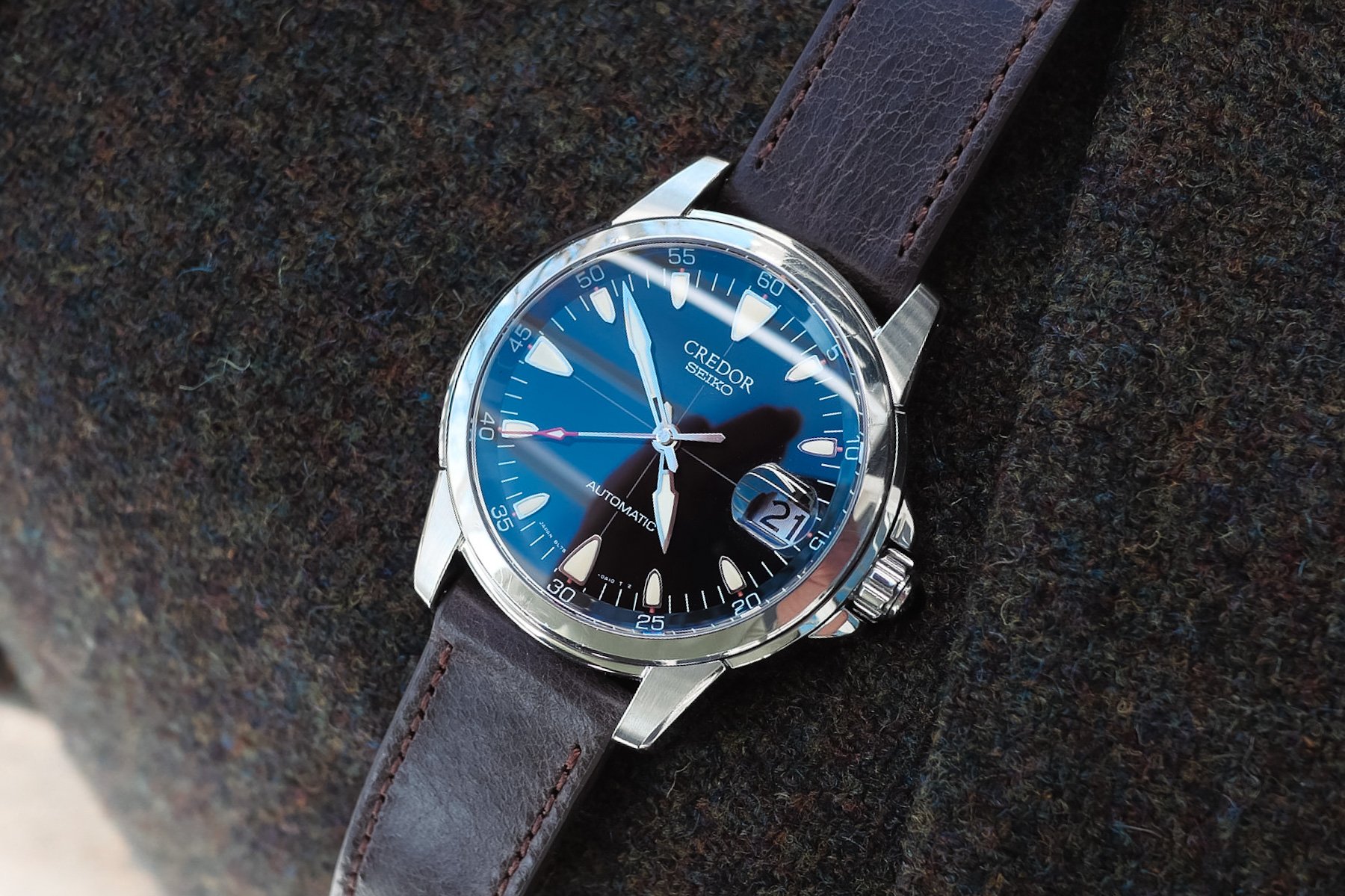 The pop of red and an unexpected cyclops

The red-tipped seconds hand makes a pop on the opulent dial, nearly touching the Arabic-numeral markings on the rehaut. And then there’s the cyclops. It is pristinely centered and covers a brushed metal date wheel with black numerals. For me, this looks more at home here than it does on the lumpy-cased Alpinist, even though it shouldn’t. Go figure. To top it off, there’s a sharp crosshair on the dial and a set of indefinably spear-ish hands with skeletonized bases. In my mind, I feel like this should look like a mess, but it inexplicably works, especially for me. I do enjoy tool watches, but I find I actually prefer them on the somewhat conflicting and elegant side. You’d never see me with an all-matte Tudor Pelagos. Get the picture? 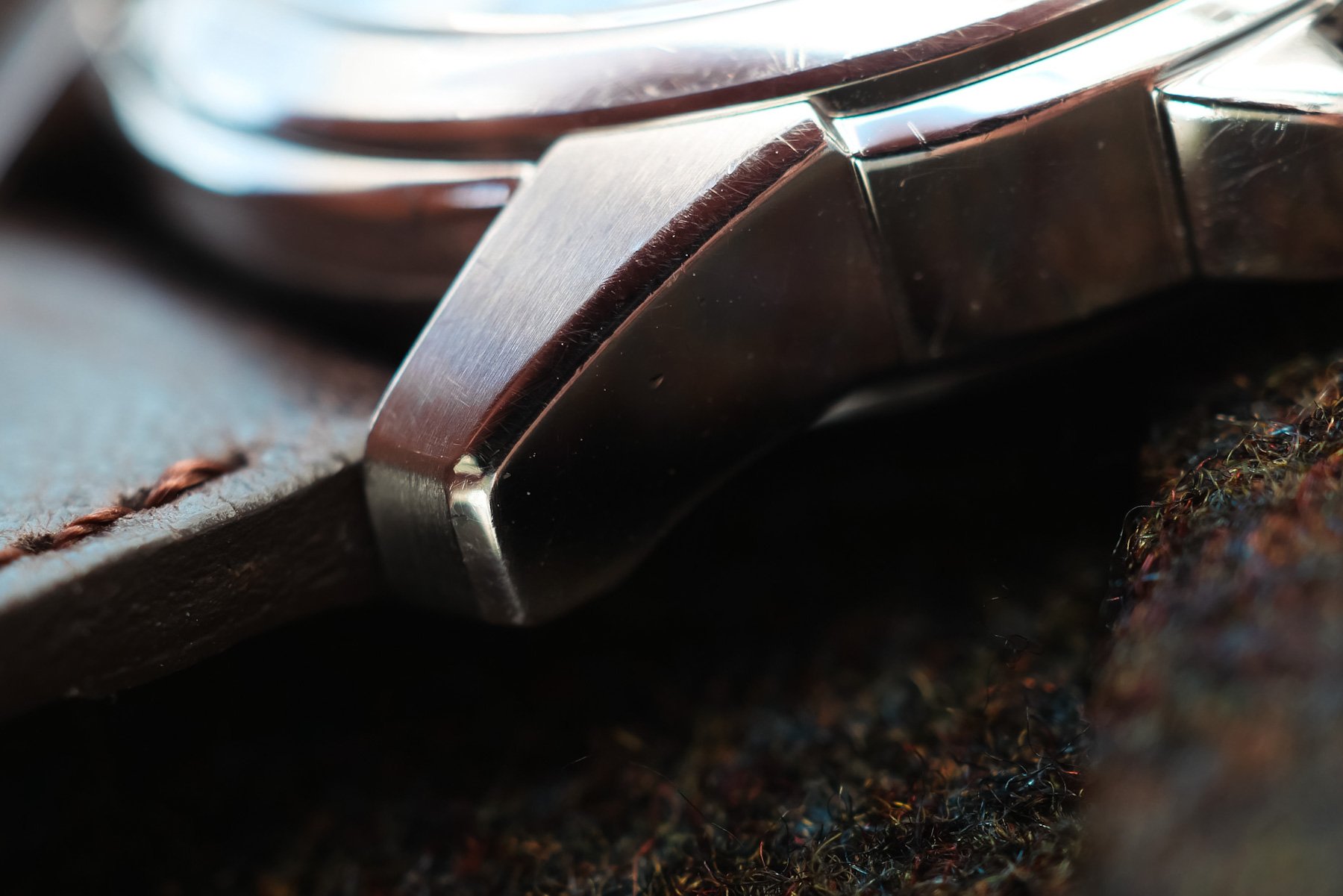 The case design reminds me of the 37mm Grand Seiko SBGW235 that I have been eyeing up on Gerard Nijenbrink’s wrist. The Credor Phoneix is just slightly larger at 38mm with a vintage 18mm lug width. What sets it apart from the elegant solidity of the Grand Seiko SBGW series is a few details. There is soft brushwork on the top and front of the lugs, a stepped case side, and even a Cartier moment. Yes, that is a cabochon, and not a synthetic spinel, but rather, an indigo Azurite. To make it even quirkier, it nestles between two blunt little crown guards, but do you know what? It works. And just like the chronograph, it’s a great conversation starter when what slips out from your cuff isn’t a Cartier. If not, you can always bore your partner to sleep with this fact. It works equally well, believe me.

Just like the Phoenix Chronograph, this is a hidden gem and a sweet blend of a solid field watch and quirky panache. The strangest thing is the cohesiveness of the piece. At first glance, you cannot help but think of it as a design mess. The Japanese made a rich, confusing blend of Grand Seiko, Cartier, and Rolex, with a bit of Seiko Alpinist thrown in for good measure. But, within this very comfortable short-lugged 38mm case, it all gels. From the sharp crosshair to the bulbous cyclops, it somehow feels natural, and it’s an elegant take on an exploratory sports watch. But then again, I’m a contrarian. I’m the one who wears bright stripy socks and a purple metal G-Shock with a suit, so don’t necessarily trust me. I’ll end on a high note with the accuracy of this 22-year-old Credor — +6 seconds after 3-4 days. Mic drop.

What do you think, dear Fratelli? Is this a wonderment of Japanese quirky-cool, or does the cheeky mix of cyclops and cabochon make you dizzy with confusion? Let me know in the comments.

Hot Topics
Introducing: The Omega Speedmaster Super Racing With Spirate System
165 comments
Design Vs. Specs — Which Is More Important To You When Buying A Watch?
87 comments
New Release: The Limited-Edition Seiko Prospex SLA067J1 Diver
63 comments
My Predictions For New Omega Speedmasters In 2023
58 comments
The Best Independent/Microbrand Alternatives To The Rolex Explorer In 2023
52 comments
Popular
Rolex GMT-Master History And Overview Of All Major References
Robert-Jan Broer
21
(From The Archives) Shut Up & Read The Truth About Cartier Watches
George Cramer
21
You Asked Us: Nomos Orion as a dress watch?
Gerard Nijenbrinks
10