The Czapek Antarctique Has Been Released In Salmon And Glacier Blue AT LAST!

Is this the best dual drop the brand has made yet?
Rob Nudds
comments 82
Share

Yes! It’s finally happened. Czapek has released the Antarctique Passage de Drake with both salmon and ice blue dials. This comes after months (literally, months) of toying with the idea. Fratello had the pleasure of seeing the prototypes of these models last September in Geneva. Back then, we lent our collective voice in support of their release. It would seem the rest of the community reacted the same way. Now, thanks to that (and a modicum of common sense), these deliciously crisp variants of our favorite modern steel sports watch are available. Better still, you can choose the dial configuration right off the bat.

What do I mean by “dial configuration”? Well, when the Antarctique first launched back in 2020, the inaugural model in that collection (the Terre Adélie) had long, claw-like indices that reached the outer edge of the dial and were crowned by a “double claw” (as I call it) at 12. The follow-up release replaced the lamé dial finish with the striking “stairway to eternity” or flinqué pattern, added a separate minuterie, shortened the hour indices, and dispensed with the double-claw in favor of an Arabic 12. These changes altered the overall character of the watch and left some fans of the initial model, craving the “return of the claw”. 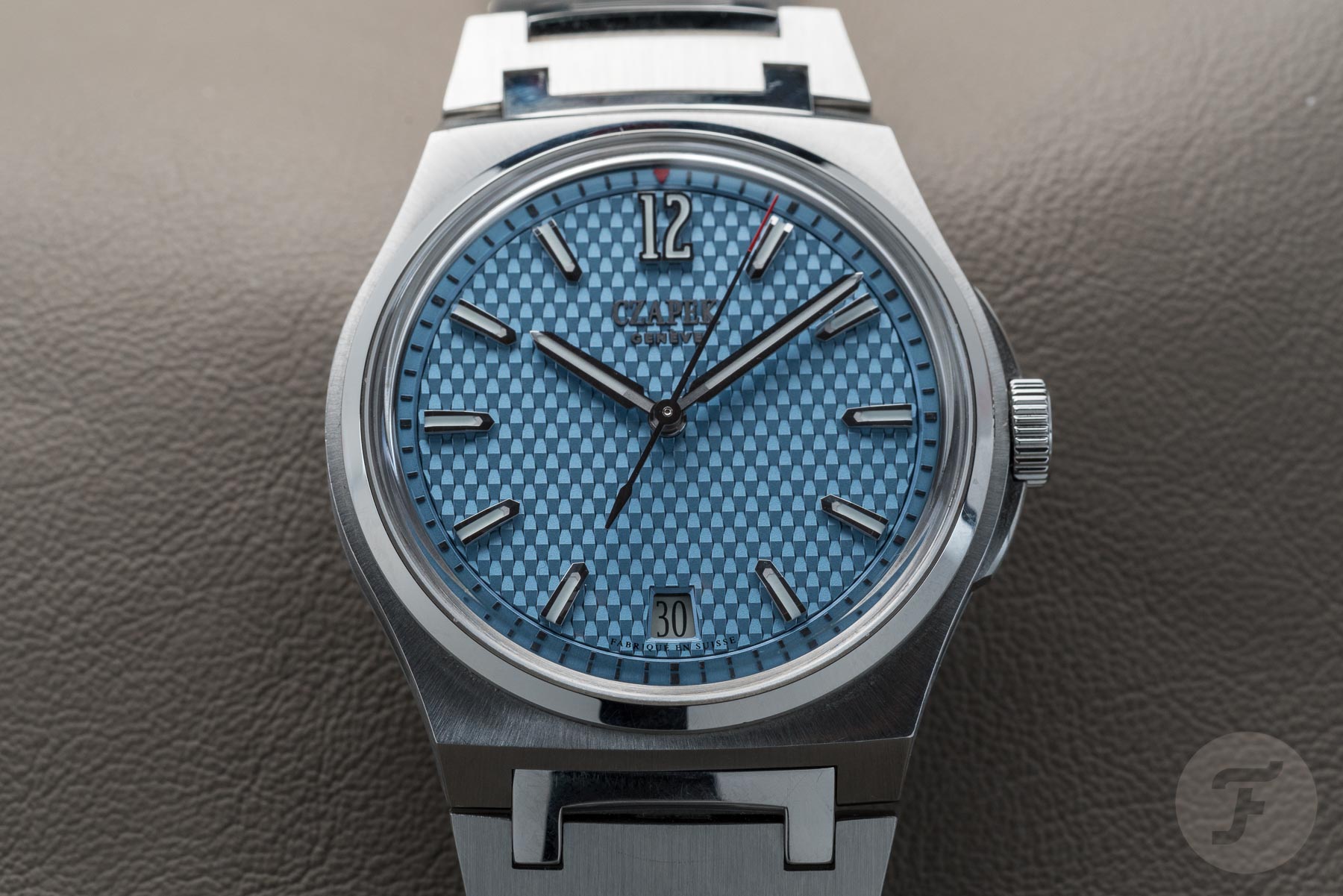 Enter Fratello. At Geneva Watch Days 2020, I proposed mixing the two dial designs together. My dream? To see the flinqué dial pattern of the Passage de Drake deployed alongside the long claw indices and double-claw at 12. Xavier de Roquemaurel, the twinkly-eyed CEO of Czapek, saw the potential in the idea and agreed to give it a whirl. What followed were several months of time-consuming research and development as Czapek’s partners attempted to mix these dial elements together seamlessly, while also experimenting with different shades of green for our very own Antarctique limited edition. 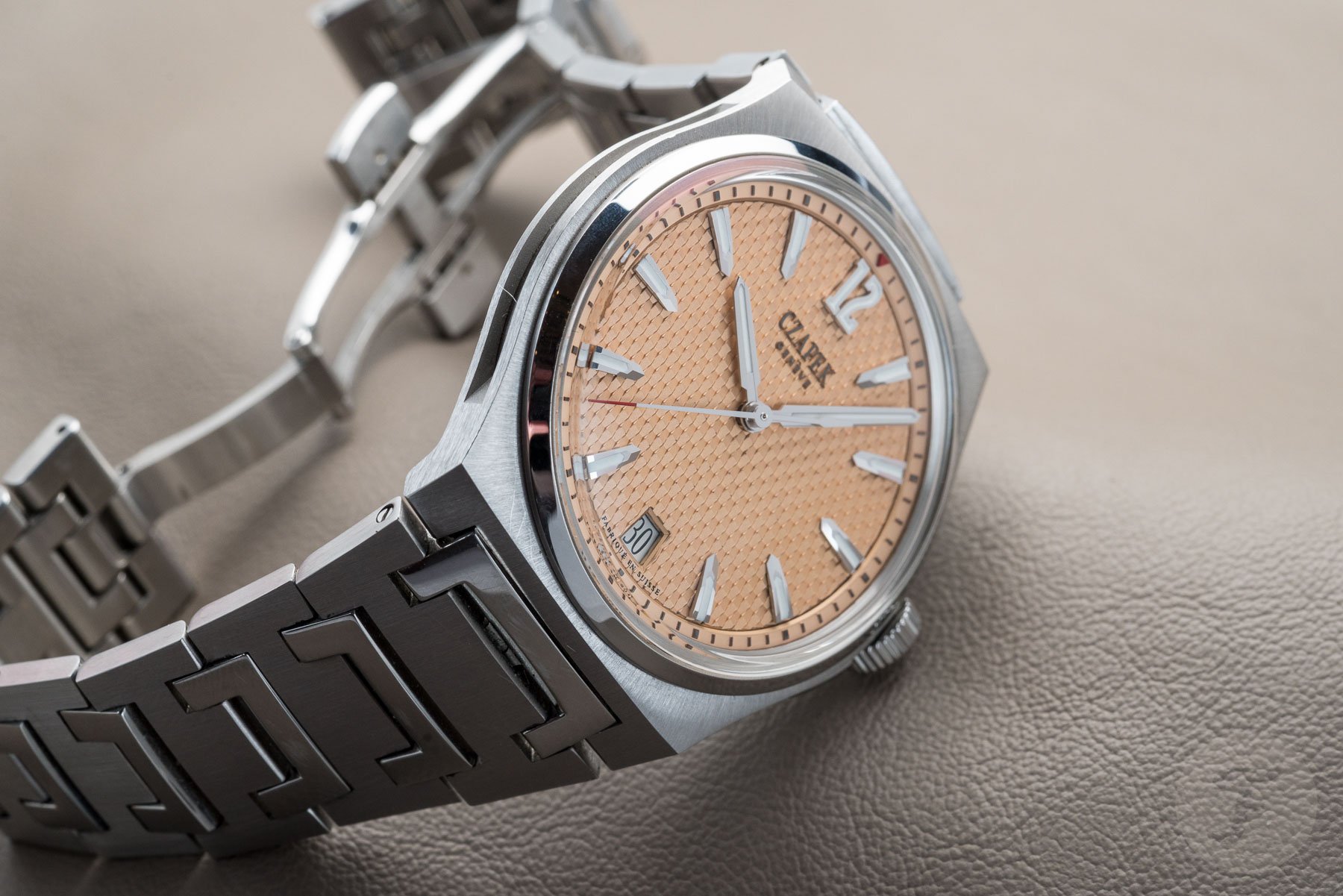 We released our version of the Antarctique, the Czapek Antarctique Passage de Drake Viridian Green, last summer. The reception was wildly positive and the model sold out in less than forty minutes. There was much praise for the green, of course, but the real star of the show was, perhaps, the dial configuration that was almost universally said to have elevated the model to a new level.

Following the positive reception to the new dial configuration. Czapek decided to make it a standard option within the collection. Considering our goal at Fratello is to influence the industry in a positive manner, I must admit we were thrilled and honored that Czapek made this move, which we hadn’t anticipated when we first announced our collaboration. 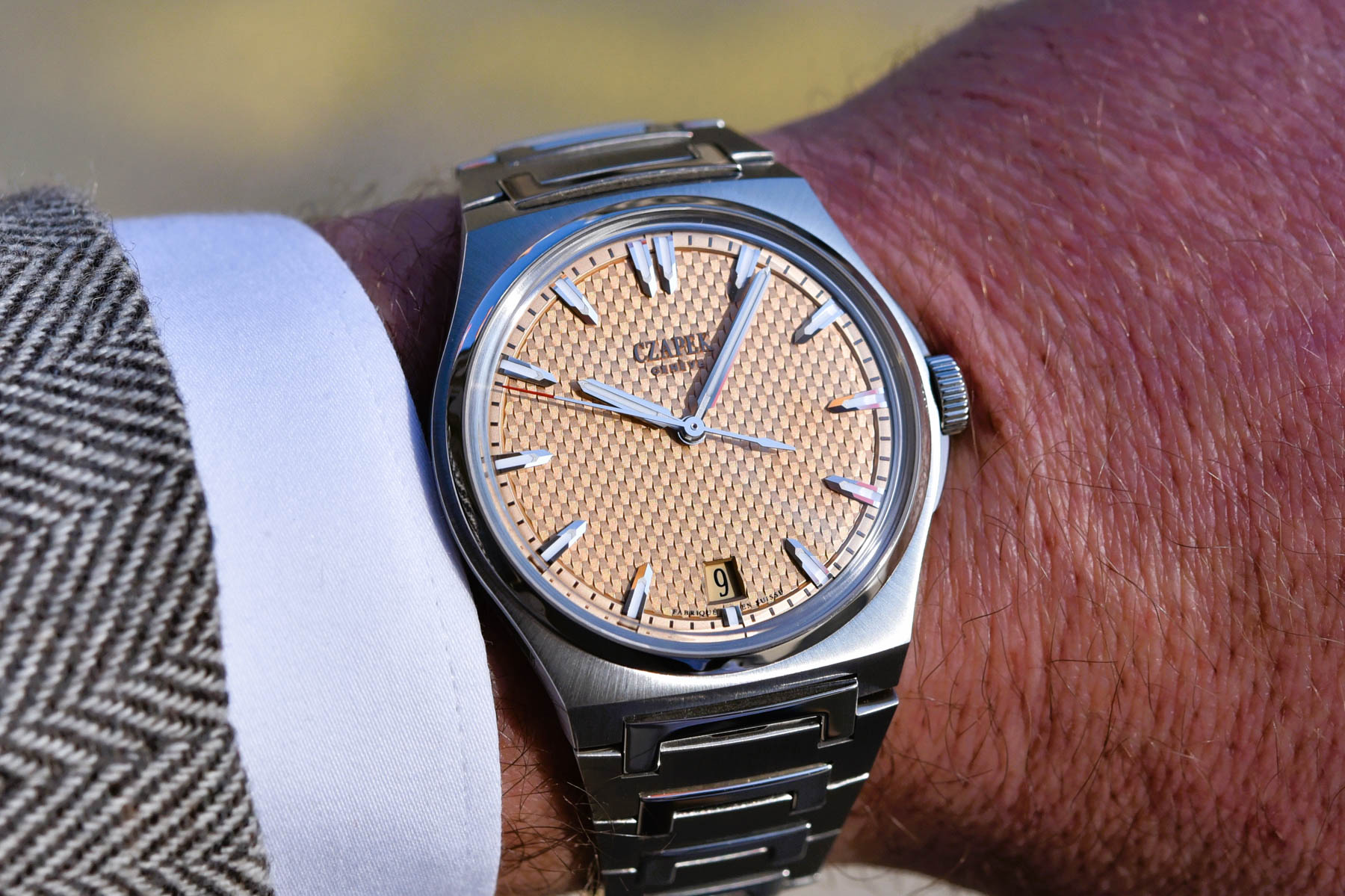 The dial configuration had already adopted several nicknames in the run-up to it becoming part of the regular collection — it’s been called “the Rob”, “the Nudds”, “the Fratello”, “the Fratelli”, and even “the Kraken”. You can call it what you like. I simply call it “the best”. And now “the best” dial Czapek has ever made has two more colors to play with. 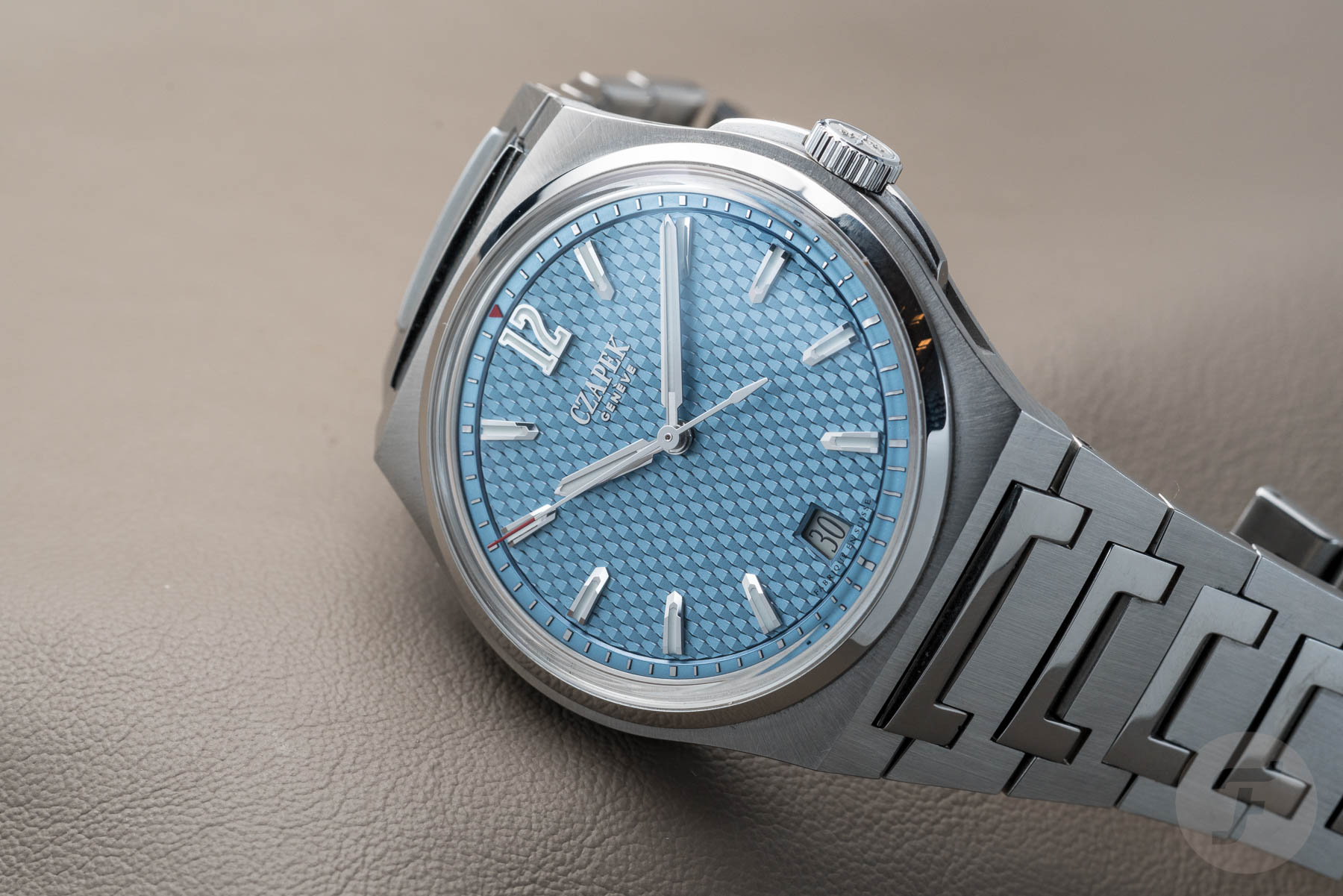 Back in September, these colors had been made as one-offs. Xavier was toying with a whole palette of new colors and while he wasn’t 100% convinced in the commercial potential of these paler-than-usual shades, he obviously saw enough in them to bring them along (albeit with black-on-white date wheels) to the fair to see what we all thought.

In short, we lapped them up. Salmon has been around for generations but still only exists on the fringes of modern watchmaking. That’s a shame. With so much nonsense polluting our eyeballs, the world could do with a bit more salmon to soothe those sore old peepers. This dial is not the richest or reddest salmon, but that may be to its credit. As a result, it is, perhaps, one of the quieter, more versatile shades.

As always, one is able to choose the seconds hand configuration also. You can choose from a red tip, a full red, or a full steel hand. To me, any configuration works swimmingly with the glacier blue, but the salmon calls for the cool kiss of steel. While I can certainly see the red of the seconds hand appealing to some, I’m personally convinced that salmon needs room to breathe. 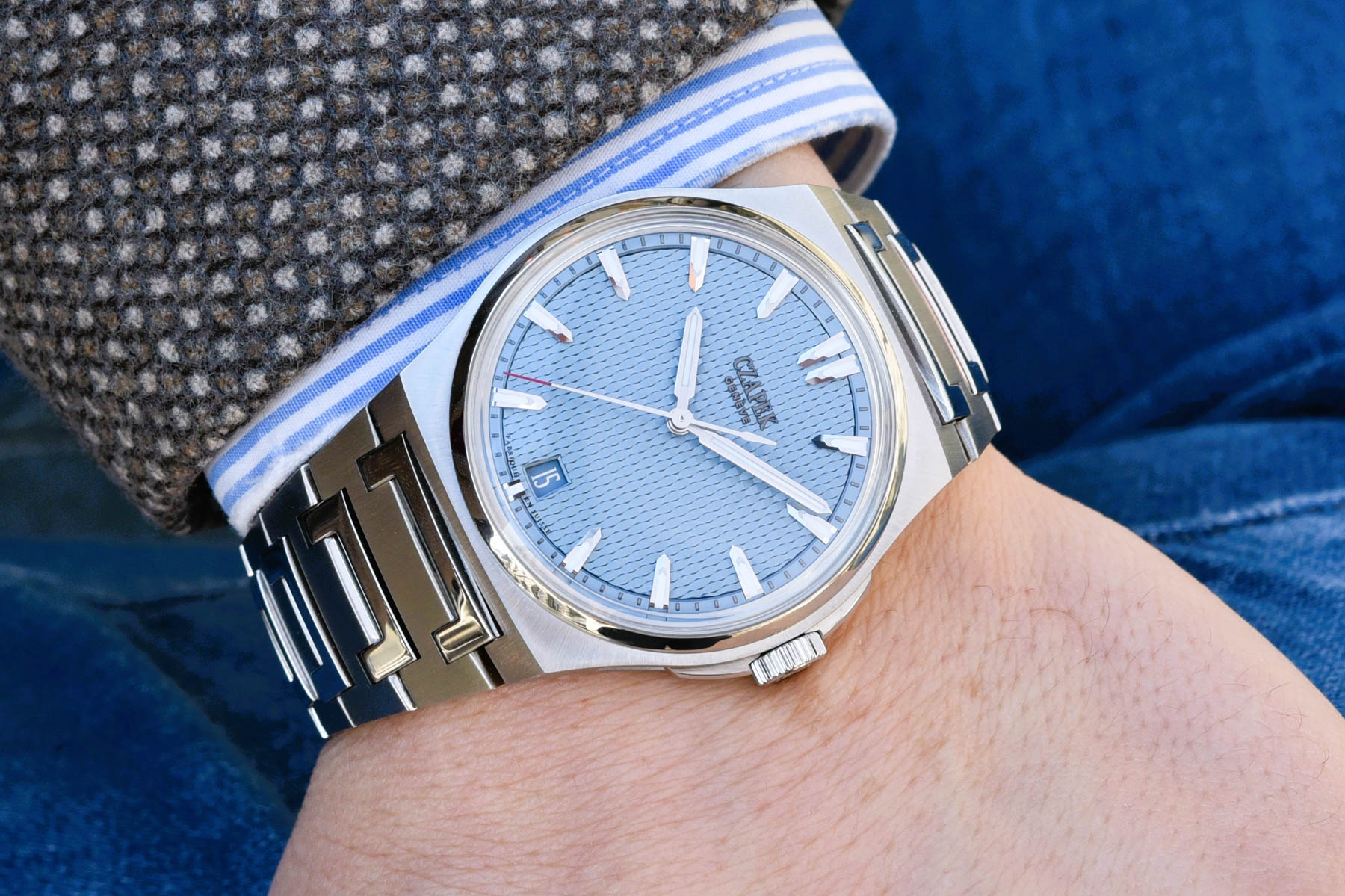 Glaciers are never late, they arrive precisely when they mean to

Glaciers move slowly. As far as natural phenomena go, glaciers are about as good a metaphor for the watchmaking industry as you can find. However, while the industry and its disparate parts move slowly, they do seem to move as one. Trends come and go and nothing much behind the scenes changes, but, for those brief moments, it seems the whole world is looking in the same direction. 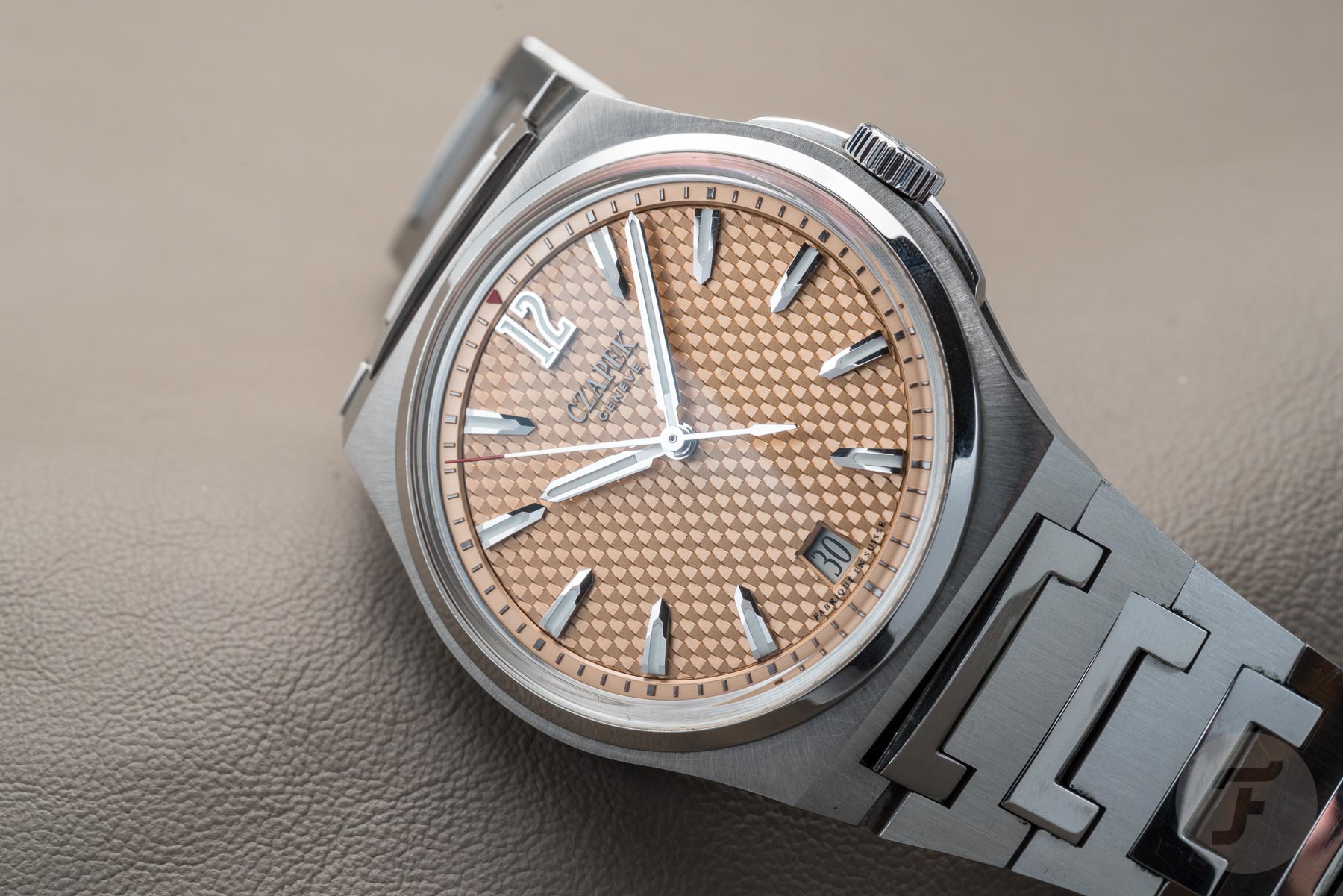 The recent furor surrounding the Patek Philippe Tiffany collaboration has not yet died down. While “Tiffany blue” is actually more of a turquoise shade, the world is mad for light blue right now. This Czapek release can hardly be seen as a total coincidence. And that’s coming from someone that knew this model was teed up for release long before the Tiffany craze took hold.

Whether it is a coincidence or not, however, doesn’t matter. It is timely. More than that, it is welcome. While Czapek Antarctique watches are not cheap nor immediately available, you are allowed to buy one if you can and want to. 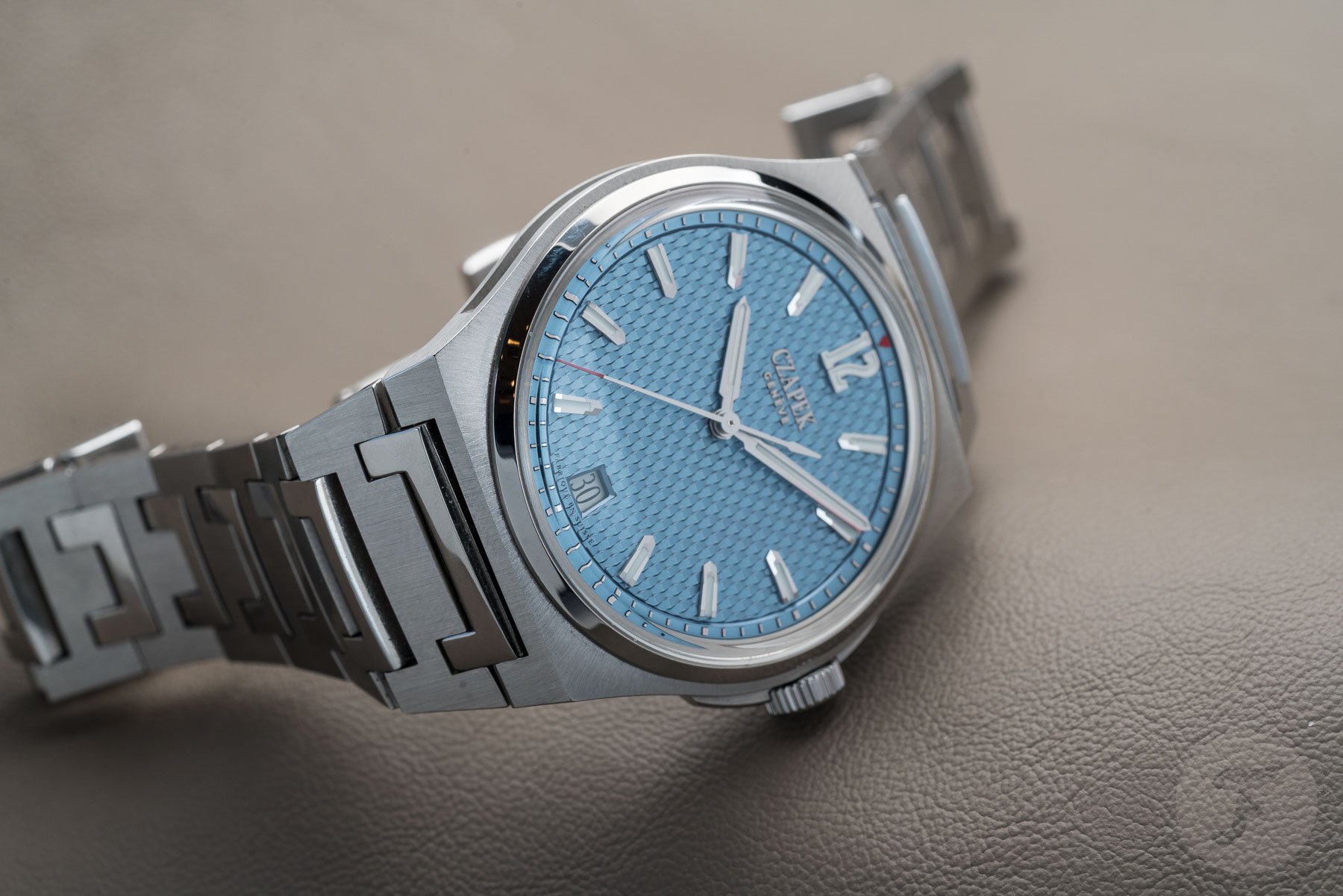 Just what the doctor ordered

If I were to pick one of these new models, I’d take the blue. I liked it a lot when I saw the prototype that you can also enjoy in these pictures. I absolutely loved it when I saw it with my favorite dial execution. The color-matched date wheel is the icing on the cake. The salmon will certainly excite and entertain its own crowd. I think it’s a great addition to the lineup. In fact, I think both models serve to hammer home Czapek’s willingness to fill gaps in the market.

Czapek has designed a classic in the Antarctique. Better still, if you want one, you’re at liberty to join a realistic waiting list. And if you’d been concerned that the range thus far was a touch conservative when it came to colors, worry no more! If you missed our limited-edition model released with the brand, you can check it out here. If you want to add either the Glacier or the Salmon to your watch box, you can get in touch with Czapek via this link. They will retail for €19,000 each before taxes. Let us know in the comments below which Antarctique model is your favorite thus far.