Dear Gruen, Bring Back The Airflight

And make the new Airflight at least as colorful as today’s rare blue, red, and gray example. When you make the new Gruen Airflight slightly bigger — let’s say somewhere around 38mm — it’s bound to be an instant hit.

It’s one of the most popular watch posts I have ever put on my Instagram. The video presenting this watch’s amusing complication (which I often gladly refer to as watch simplification) has more than 300,000 views. I even got buy-out offers from the US to the UAE. But no matter how many people tried to get me to sell it, the Gruen Airflight still sits in my collection. And until it’s inevitable, it will never leave. 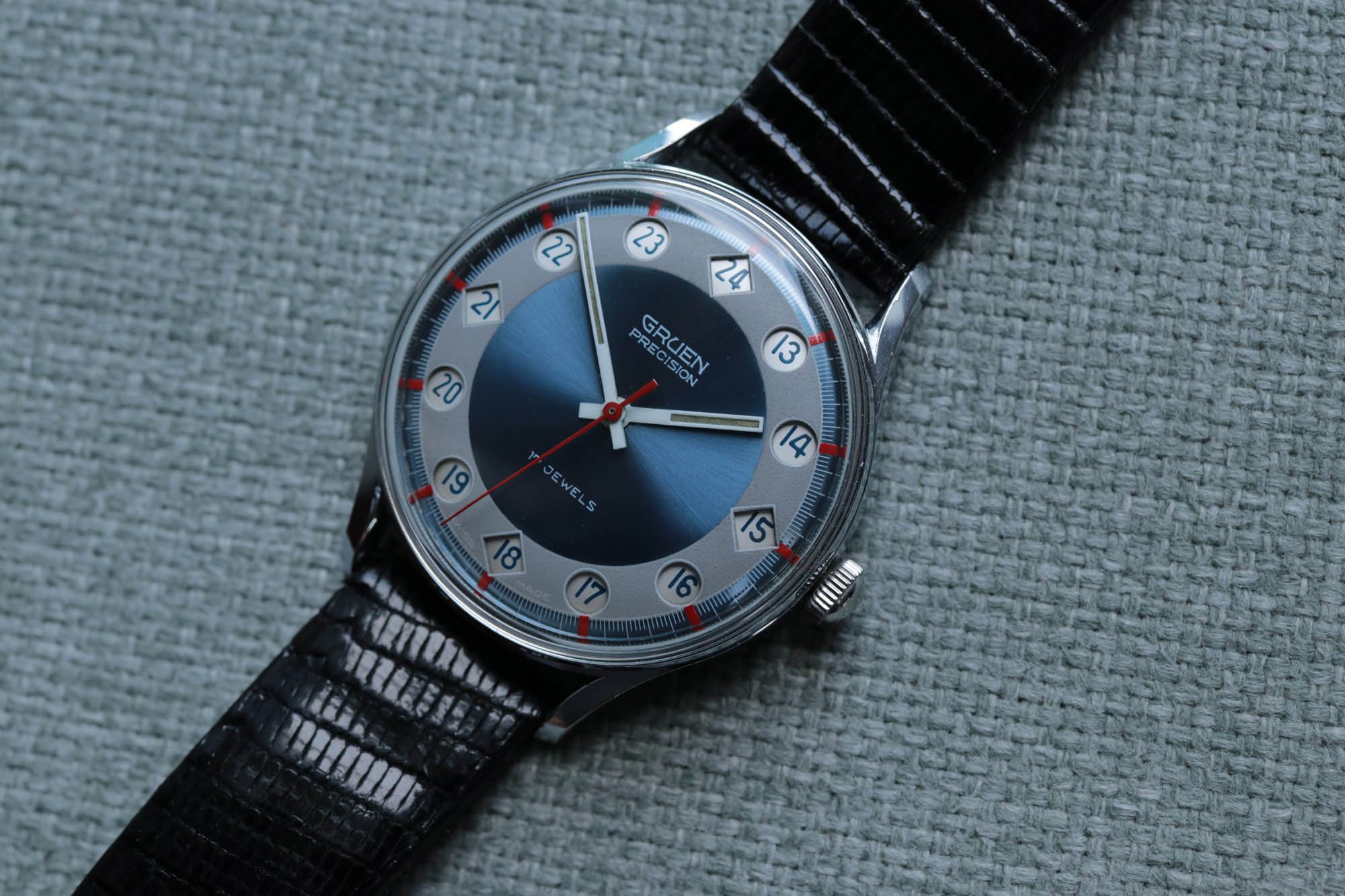 Those familiar with my collection know that I love to dig deep and discover timepieces that were hiding from the majority of collectors for years or even decades. Over the years, I have unearthed a few pieces that never cease to fascinate me. While many collectors crave the most admired complications, I bumped into a few watches with unusual features that had never been seen before or since. The external balance regulation on the Sperina Regulator and the crazily simple time alignment on the Mido Radiotime are the leaders on my nonexistent official list of horological simplifications. Well, the Gruen Airflight is a hot candidate for the third position.

There are a lot of 24-hour-dial watches out there. They either have two concentric circular tracks (not true 24-hour watches) or harder-to-read dials marked with 24 indexes on one singular circular track. And then came the Gruen Airflight, which has twelve see-through apertures in the dial. At 1:00 PM (more on that soon), a thin disc clicks over, automatically exposing the numerals 13 through 24. I can’t find any better description than that it’s magically simple. 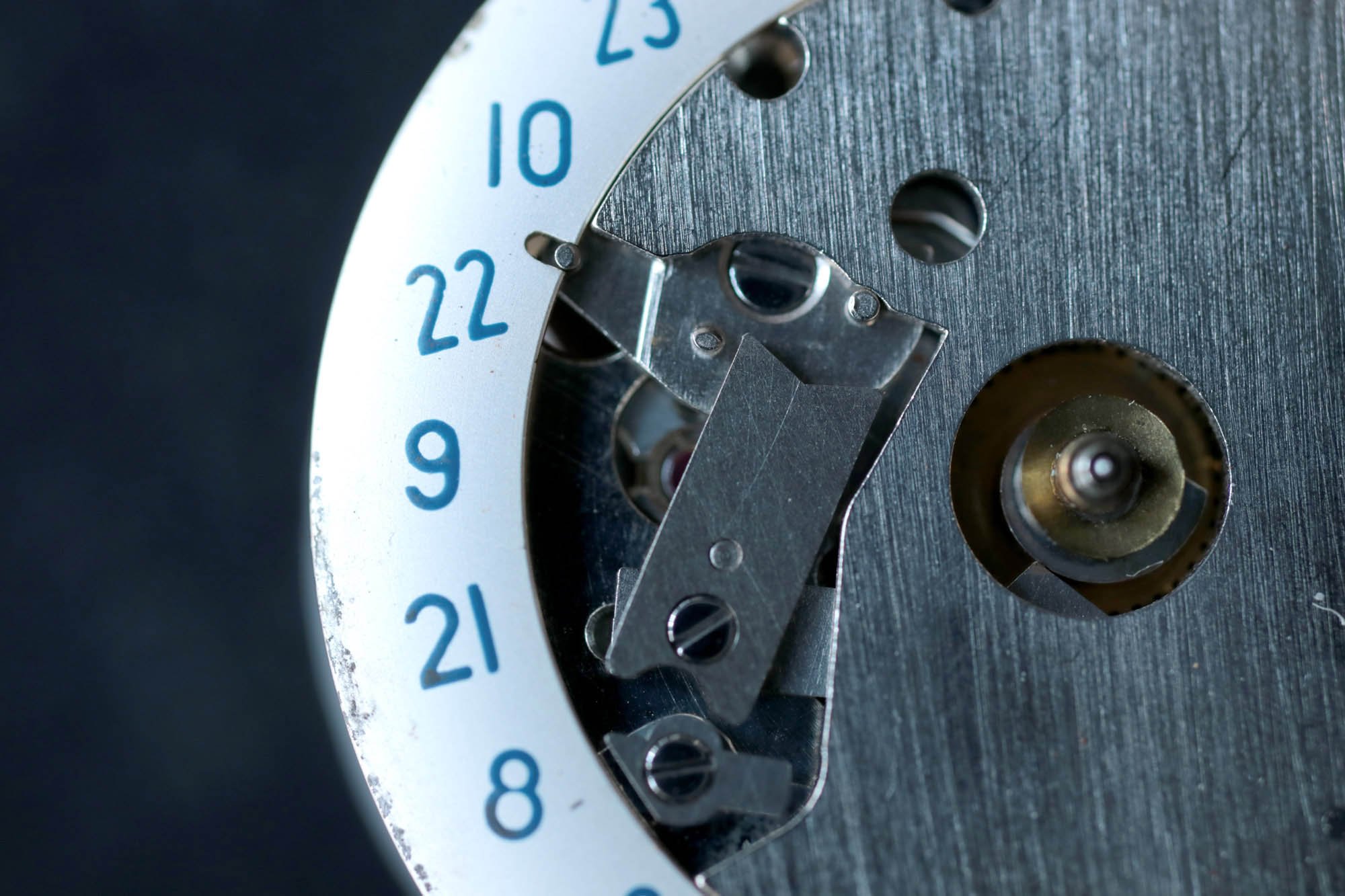 I was so fascinated with the idea that I had to see it unstripped. The Airflight uses the same principle that we find in cam-actuated chronographs. It all starts with the central hour wheel with a snail cam. At the end of the set of levers, there is a tiny pin tucked into the edge of what would usually be a date disc. Once every 12 hours, when the lever drops from the edge of the snail cam, the pin gets an immediate click impulse and jumps back and forth, moving the disc forward. However, there is one important detail to highlight in my case. Only after I got my Airflight serviced did I learn that the disc is supposed to switch over at 1:00 PM, not at noon as it does in the video. I will get it fixed with the next service. 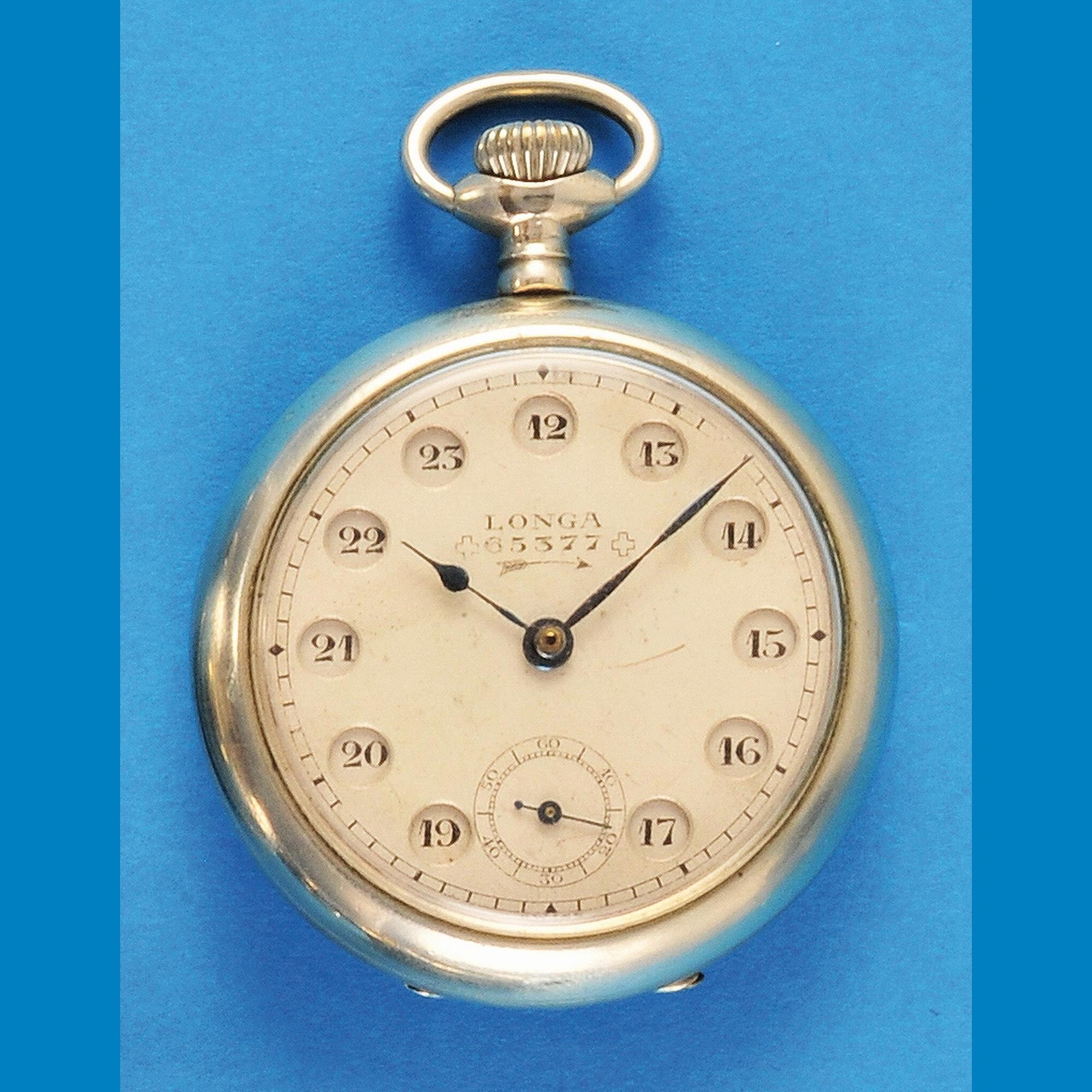 Well, saying that Gruen was the first to introduce this idea is not entirely true. Gruen was the first one who implemented it in a wristwatch in the 1950s. Two months ago, however, I bumped into a Longa pocket in Germany watch that seemed to follow the same idea. It even has a 65377 Swiss patent number printed on the dial.

I managed to find the full patent, which was granted to Gilomen & Cie., Lengnau on August 6th, 1913. Based on the technical drawings, it uses the same (but larger) snail cam and sets of levers. I wanted to get it together with my Gruen Airflight, but unfortunately, it sold at auction for more than €2,000, which I found a bit over my budget.

My Airflight deviates from the standard Airflight, most probably because it’s one of the late-production pieces.

I guess that for the time being, I’ll have to make do with the Gruen Airflight only. But it’s no torment — on the contrary. When you google “Gruen Airflight”, most pictures will show it in a dressy style so typical of a watch from the era. My Airflight deviates from the standard Airflight, most probably because it’s one of the late production pieces. It’s amazing to observe how the same idea evolves over the decades from a design perspective. 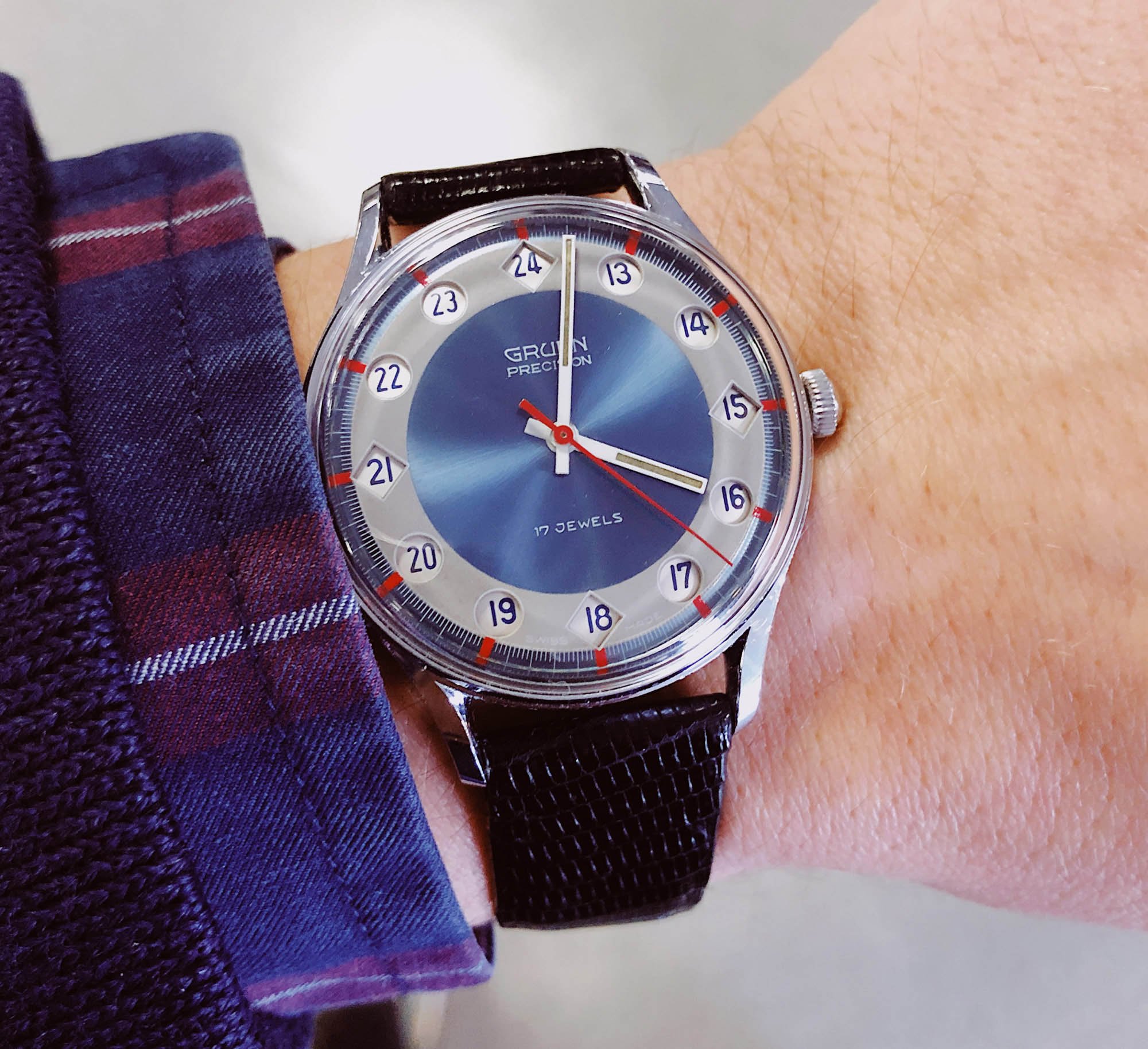 There is no shiny pontife or triangular full-metal hands, just simple white lumed baton hands instead. The central seconds hand matches the short red indexes bleeding into the apertures for the jumping hour numerals. The contrast between the metallic blue central disc and the light gray belt around the hour windows is just divine. While the blue disc strikes you with a sunburst effect, the gray belt has a fine tarmac-like structure on the top. The major dial components didn’t change, so it clearly makes this true to the Airflight family. The rest of the design, however, gives it a fresh and younger look. 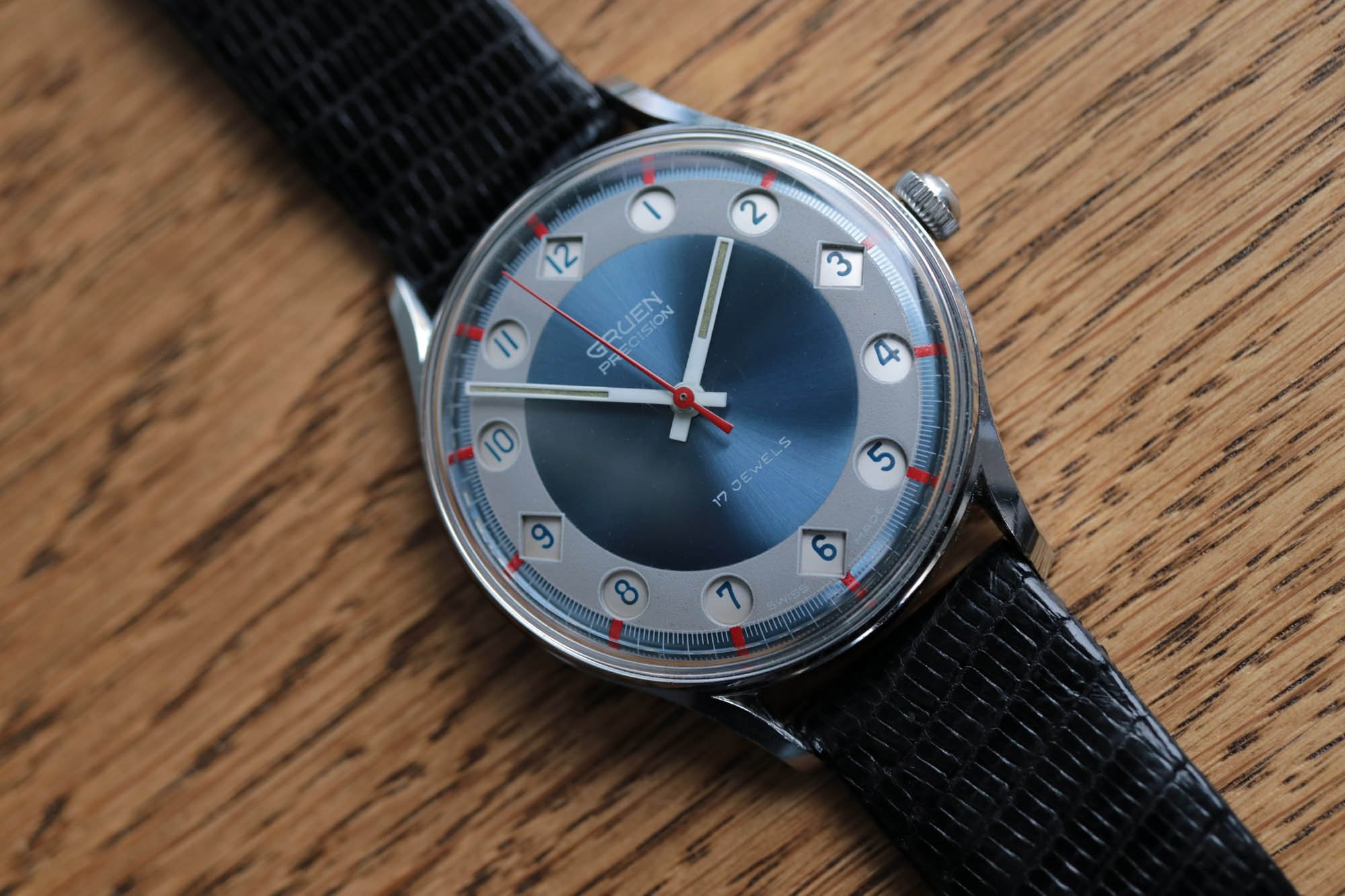 Everything I just said above only confirms what an opportunity there is to use this practical idea and play with a design a bit. I like my Gruen Airflight as is, and I can imagine it being reissued in a 36mm case with the same design structure. But at the same time, I can imagine tons of other visual variations with different fonts, aperture sizes, case materials, and case shapes. And that is just the beginning… Would you like to see the Gruen Airflight come back again? If so, let me and (hopefully) the Gruen brand’s future savior know in the comments.