This is the perfect series for me as a collector! I realized that I’m more focused on newer watches than I am on vintage. While I love the aesthetics of vintage watches, their fragility scares me a bit. Therefore, I often buy vintage-inspired watches, and that’s exactly what this series is about — vintage design combined with contemporary quality and finishing. So what watch would I like to get a modern version of? Dear Seiko, could you please make a re-edition of the 5717-8990 Monopusher Chronograph from 1964? And could you make it as true to the original as possible?

This is my first time contributing to this series of articles, and to be honest, I had to think a little bit about the watch I wanted to revive. As I said, I tend to focus on newer watches. That, however, doesn’t mean that I completely neglect the vintage side of the hobby. I also save pictures and reference numbers of vintage pieces that catch my attention, and this Seiko monopusher chronograph has been in my archive for quite a while now. Have you ever seen such a clean iteration of a monopusher chrono? 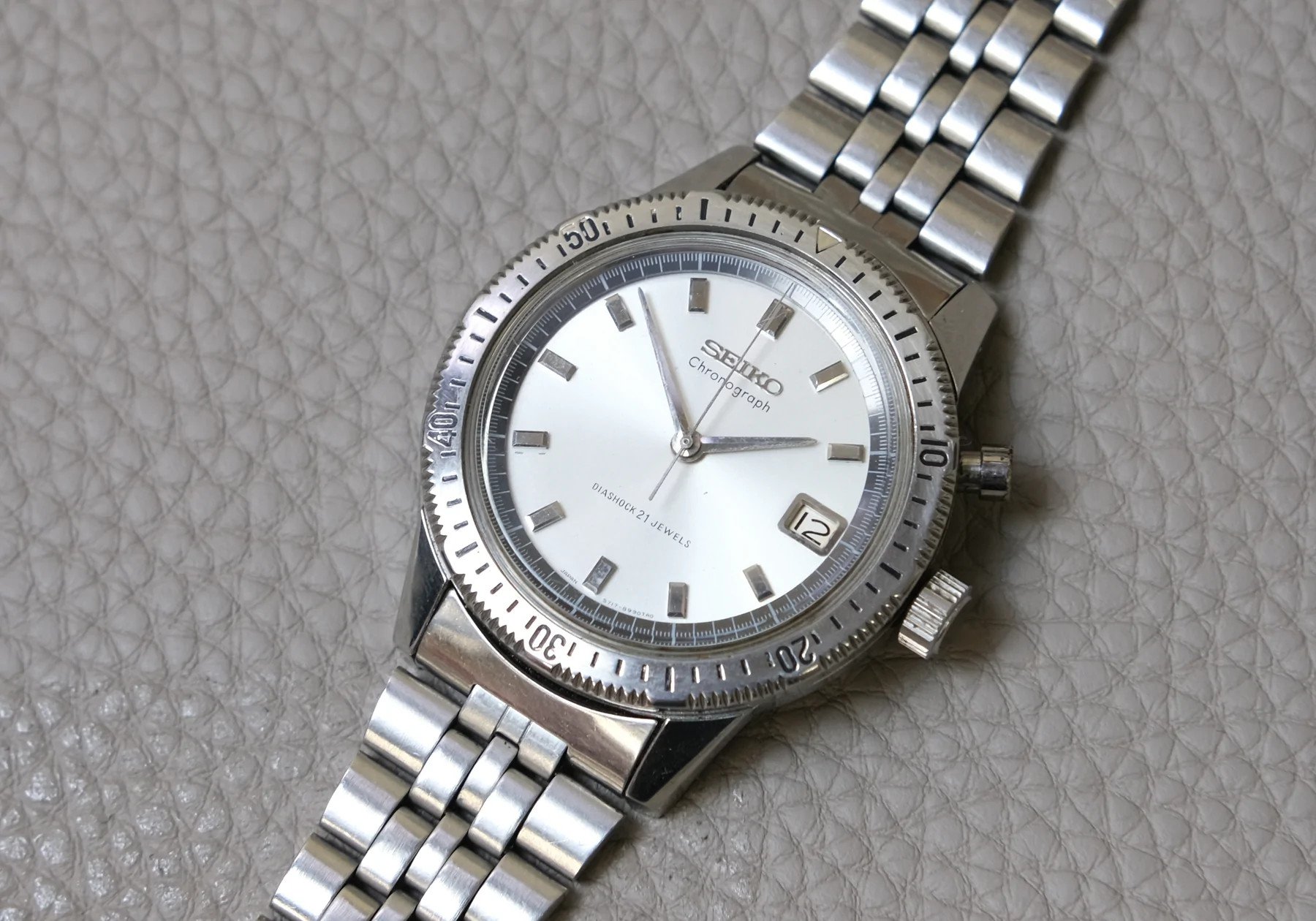 The Seiko 5717-8990 was introduced for the 1964 summer Olympics in Tokyo. The ’60s were a great time for Seiko watches (just look at this overview), but the 5717-8990 is definitely my favorite! Seiko celebrated becoming the official timekeeper for the Olympics with the launch of this watch. And what a great way to celebrate! This monopusher chronograph has a case diameter of 37.5mm, measures 45mm from lug to lug, and is 12.5mm thick. All in all, these are very modest proportions for a chronograph, and that’s something I adore about this watch. The case with its angular, beveled lugs even kind of looks like the case of my 38mm Blancpain Bathyscaphe.

Then there’s the bidirectional stainless steel bezel. You can use it to count the minutes you’re timing. Just put the triangle on the minute hand when you start the chronograph and read the elapsed minutes from the bezel when you stop it. I suppose it’s not the most accurate way of timing, but it works. There are also 5717s out there with black Bakelite bezels, but I prefer the look of the stainless steel one. I think it looks great with the satin-finished silver sunburst dial. 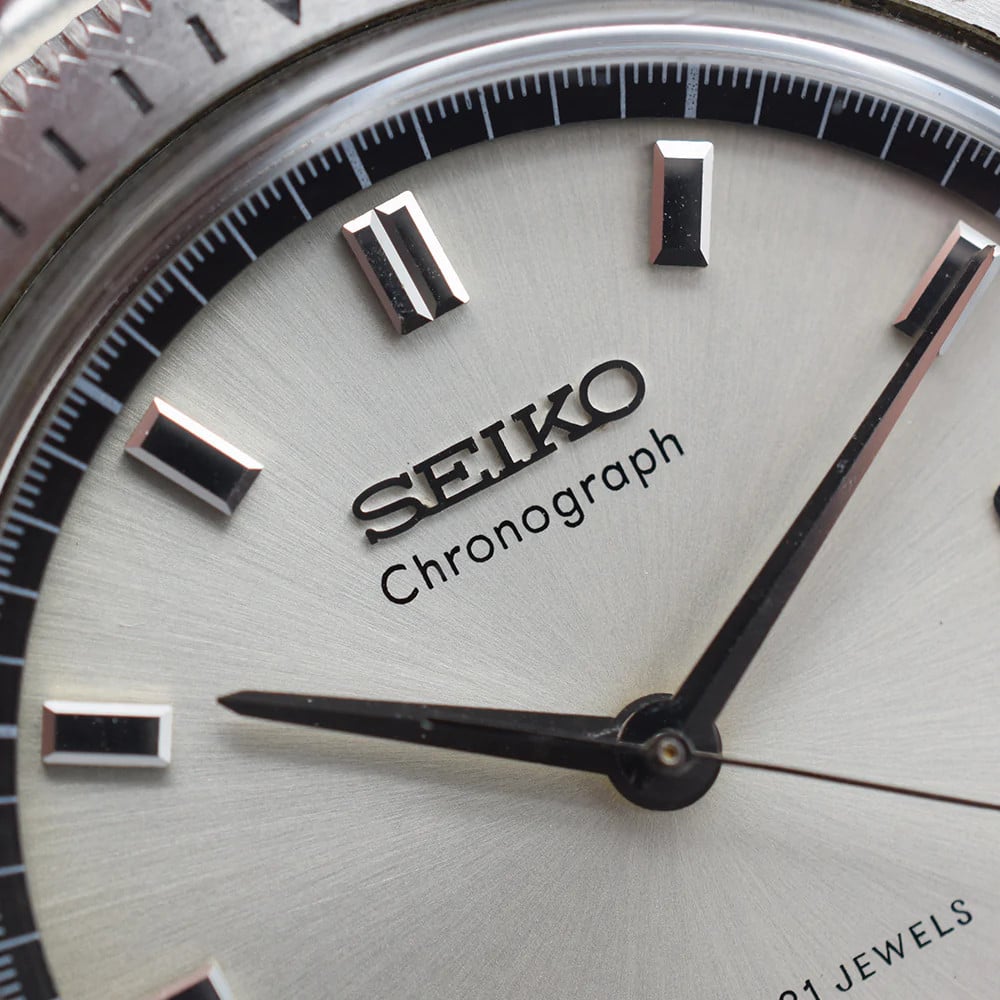 So fresh and so clean!

There were also 5717s with a black or very dark gray sunburst dial. But again, I prefer the lighter version in silver, especially with its black minute/seconds ring. Then there are stick markers at every hour except 3 o’clock because there’s a huge date window there. Did you see that big, fat frame around it? I love it! I also really like the hour and minute hands, mainly because they’re quite straightforward with no overhanging counterweights. Plus, the seconds hand is as sharp as a needle. It sits nice and proud, pointing at 12 o’clock until you start the chronograph. The applied Seiko logo makes the whole dial feel even more elegant than it already looks. Just think about it: there’s the time, the date, and a chronograph on this watch, but it looks remarkably uncluttered and way more stylish than many time-only watches out there. 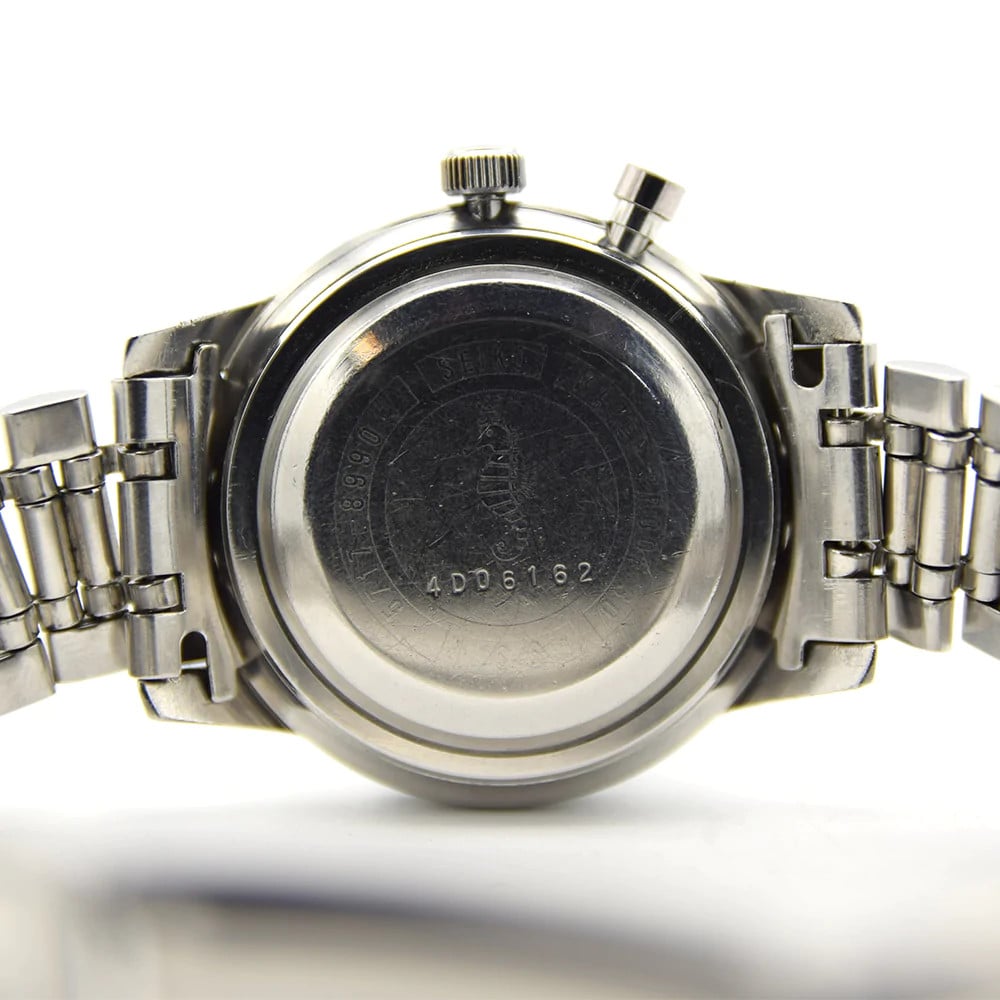 You can find examples of this watch with a torch on the case back, commemorating the 1964 Tokyo Olympics. But there are also versions with a seahorse on the back. Most of the pieces I found online, however, were quite worn out, and their inscriptions were not that visible anymore. 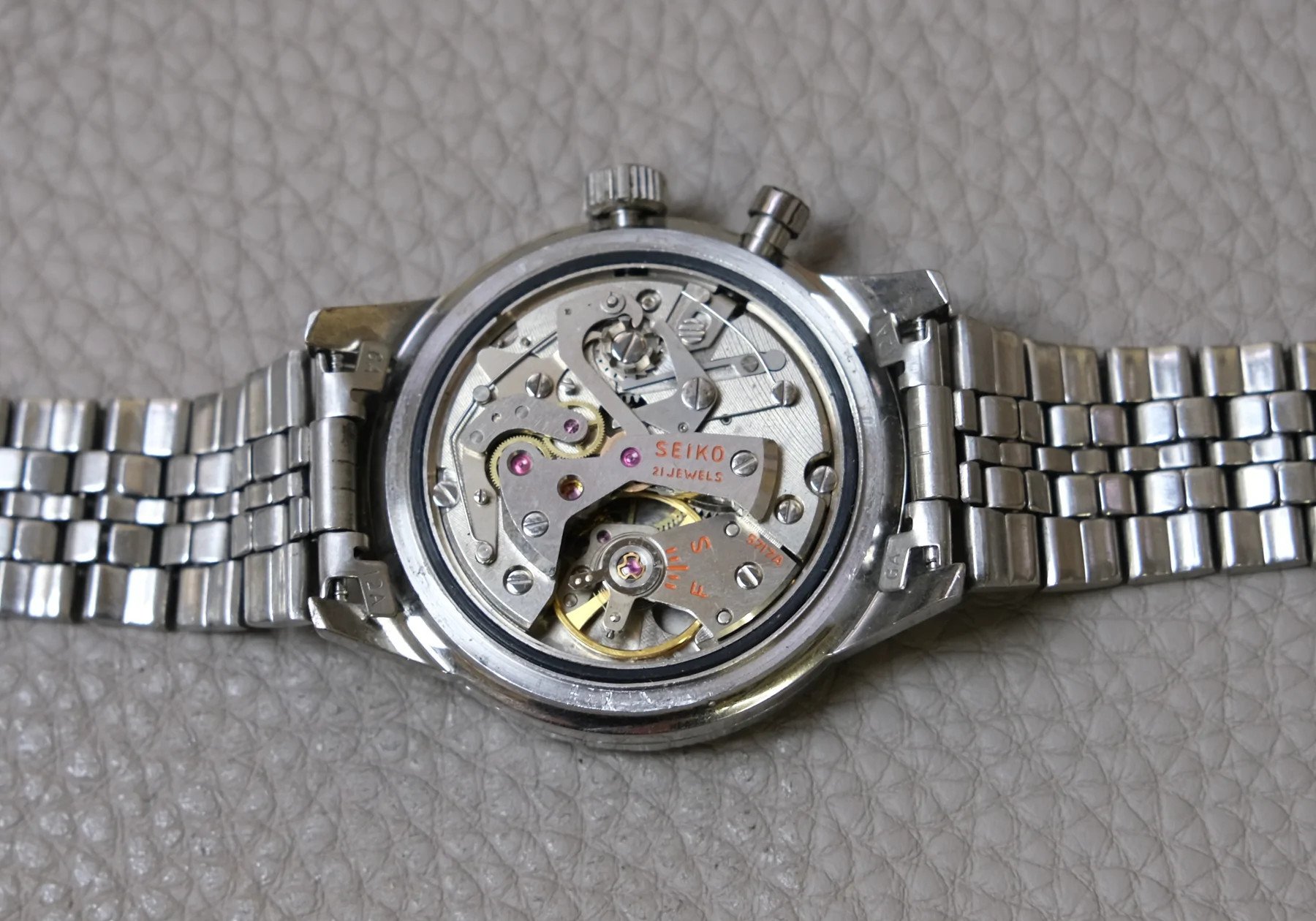 This Seiko monopusher chronograph is powered by the hand-wound 5717 movement. It was the first chronograph caliber that Seiko ever made. It contains 21 jewels and runs at 18,000 beats per hour. And, as you could guess, this column-wheel chronograph starts, stops, and resets via the single pusher at 2 o’clock. It’s so simple, so clean. What else would you need? But despite it being such a nifty little machine, Seiko decided to stop producing it at some point. 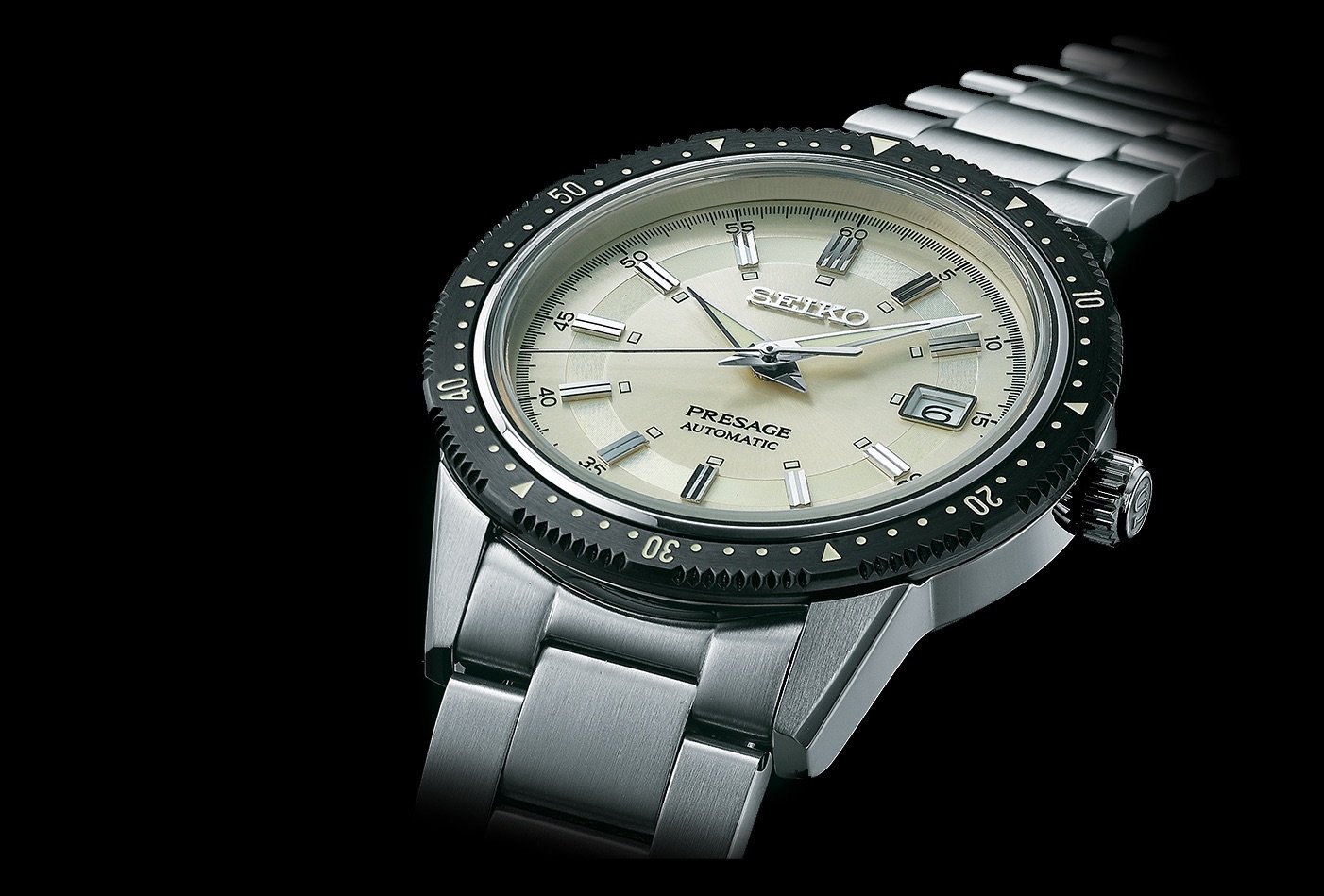 Seiko doesn’t produce the monopusher movement anymore, and that’s precisely the problem with the newer versions of the watch that Seiko has launched in the past. There was the SARX069 (also known as the SPB127), which was heavily inspired by a particular version of the 5717 or the 5719. But although the design is reminscent of those earlier references, the watch is not a chronograph. In 2019, Seiko tried to set that right by introducing the SRQ031, a 42.5mm chronograph with three sub-dials and two pushers on the right side of the case. Honestly, I think that was just one big insult to the original 5717-8990 from 1964. 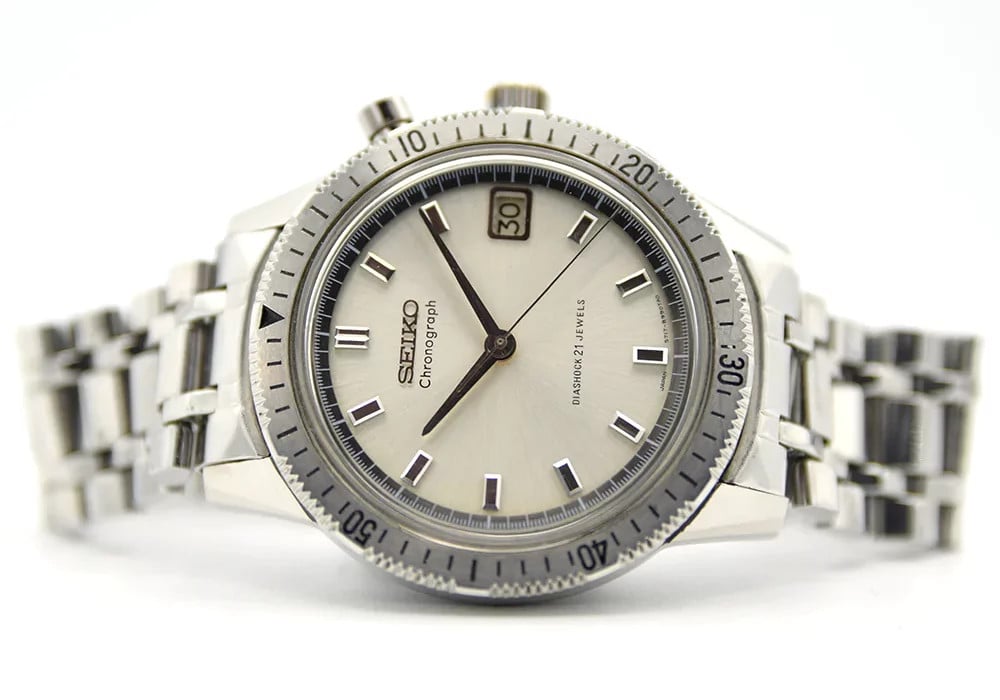 I understand that Seiko doesn’t have a monopusher chronograph movement up its sleeve anymore, but wouldn’t it be great to create one in honor of the brand’s first-ever chronograph caliber? I think that a lot of people, including me, would appreciate the watches that could make use of such a movement. Maybe the first could be a true-to-the-original reissue of the 5717-8990. Then, perhaps, we could get some more modern designs later on. You can do it, Seiko!

What do you think? Would you buy a modern Seiko 5717-8990 monopusher chronograph? Or would you like to propose another vintage Seiko for a re-edition? Let me know in the comments below!

I’d like to thank both Kibble Watches and Perpetual Watch Lover for letting me use their pictures.