And it's the brand's cleanest look yet.
Nina Scally
comments 4
Share

In an industry already saturated with grey and black-dialed dive watches, it takes a brand like Doxa to make a collector really sit up and take note. The new and evocative Doxa Whitepearl dive watch is a new interpretation of the rugged and retro Sub 200 series – a subaquatic watch that extends the brand’s relationship with color, now in a 7th shade.

It isn’t just dive watches that Swiss-based Doxa is well-known for. There are other strings to its bow that need some recognition, but dive watches are certainly its forte and over the recent years it has become increasingly difficult not to mention its contribution to the dive watch world, especially when speaking of those occupying the mid-range bracket. Founded in Le Locle in 1889, Georges Ducommun had envisioned a successful career in watchmaking from the young age of just 12. Originally operating under the name “Georges Ducommun, Fabriques Doxa”, the young watchmaker made pocket watches that were recognized at the “Exposition Universelle at Internationale” fair in Belgium in 1906. He also earned a medal for his anti-magnetic technology at the World’s Fair in Milan just a year later. 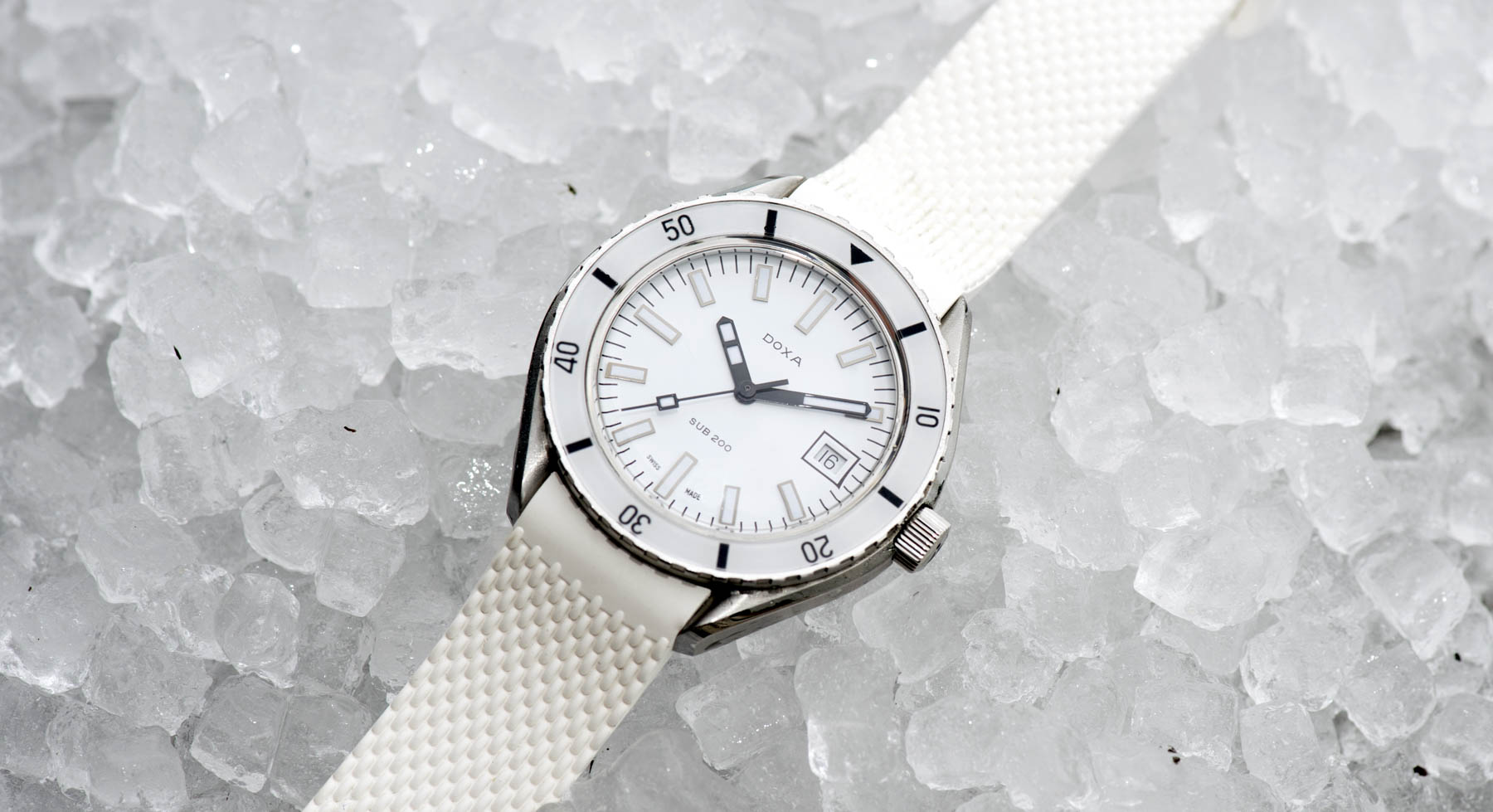 Doxa is also recognized for a patent filed in 1908 for an 8-day power reserve, as well as the equipment it developed exclusively for Bugatti race cars. Before Georges passed away, he had begun focusing his attention on the aviation and nautical industry, putting the brand on the map for developing pointer date systems and alarms. 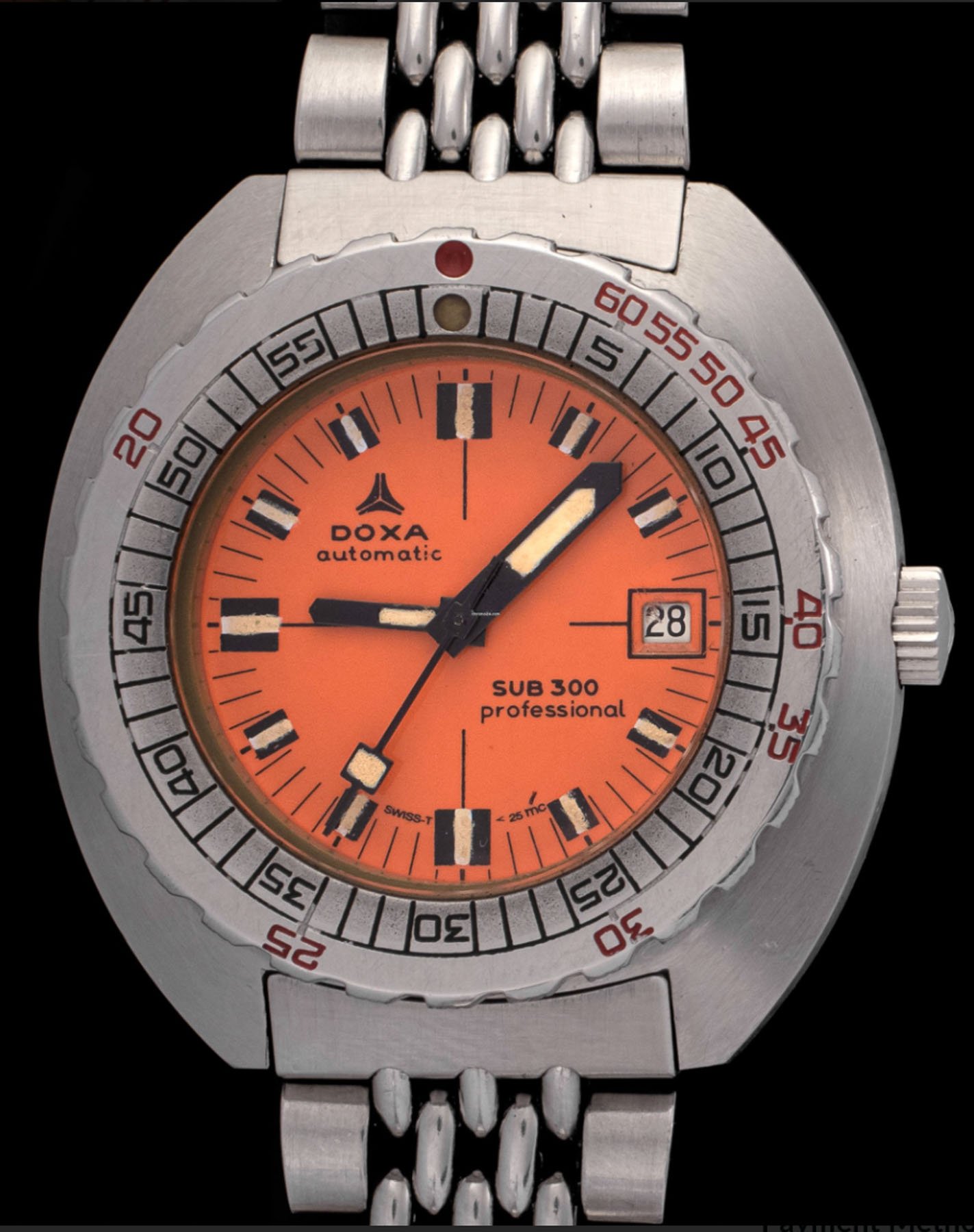 In 1967 Doxa released its first dive watch. Working in collaboration with diving legend, photographer and conservationist, Jacques Cousteau – the tool was an instant success. The Sub300T was primed for daring underwater exploration and came clad in a striking orange-colored dial that had never been seen on a dive watch before. The most legible color underwater offered a clear display to gauge the time on and was paired with a set of black hands for optimum contrast. A model from this line was eventually utilized by Cousteau’s grandson, Fabien, who completed the world record-breaking Mission 31 with it strapped firmly to his wrist. 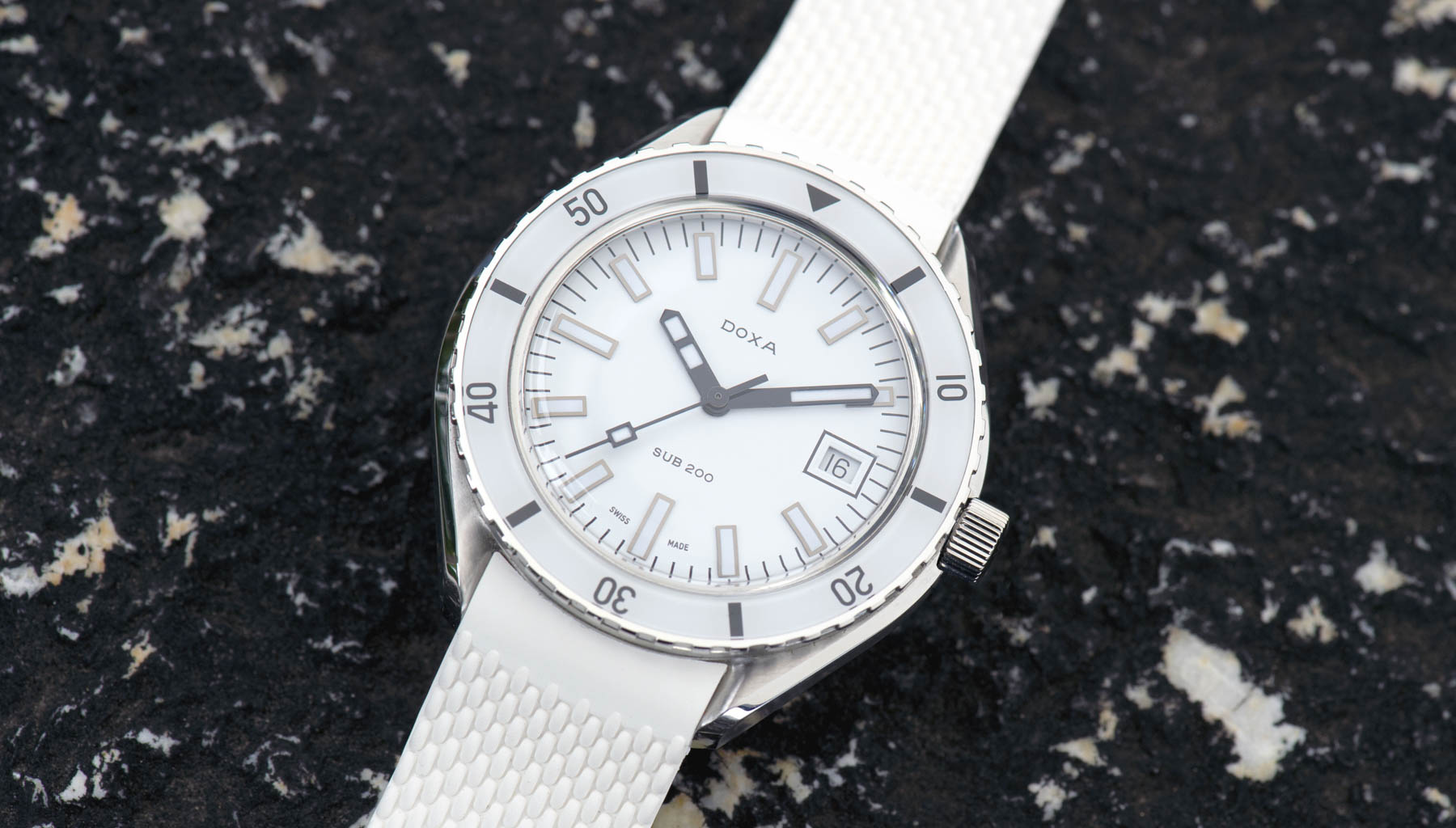 Compared to Doxa Sub 300 watches today, the original dive watch had a slimmer case design but featured a domed crystal and a patented unidirectional bezel. A few years ago, Doxa released a limited edition family of steel Sub 300 watch before the Sub 300 Carbon Aqua Lung US Divers model made its debut, forged from carbon. The watches now come in an array of bold and daring dial colors, as do those from the smaller and simpler Doxa SUB 200 clan – a family of dive watches water-resistant to 200 meters. 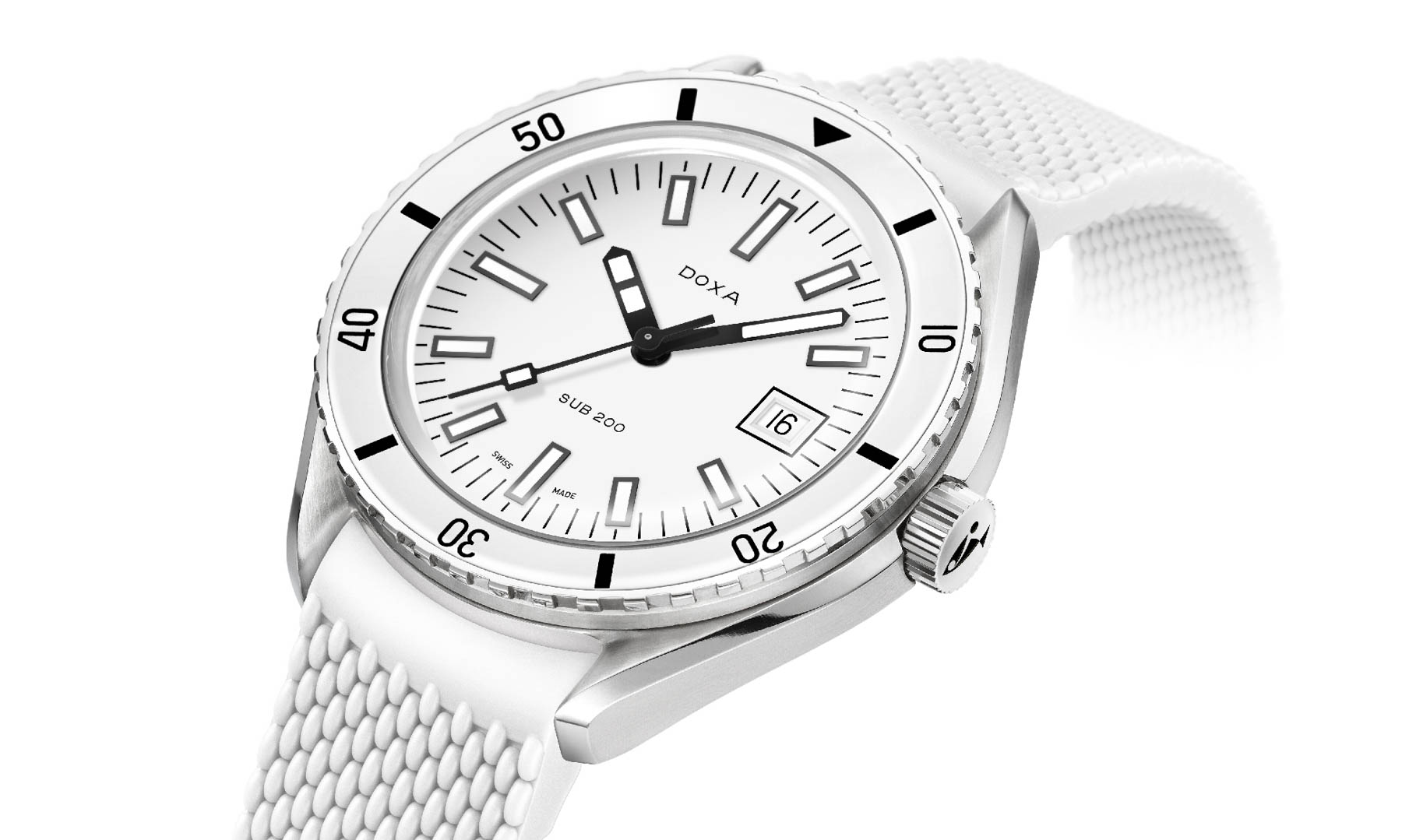 The Doxa Sub 200 watch – although promoting an exciting and playful way to wear dive watches, is as much about functionality as it is anything else. Make no mistake, the brand has serious engineering credibility when it comes to developing dive watches for both professional and amateur use. Tapping into a different audience to the Sub 300, Sub 200 models (albeit less brazen) still offer a vintage-inspired edge, and to date had been presented in 6 different colors. Now Doxa welcomes white to the rainbow dive watch collection. The Doxa 200 Whitepearl watch is a 42mm steel model that follows in the footsteps of the orange Professional, the silver Searambler, the black Sharkhunter, the navy-blue Caribbean, the yellow Divingstar, and the most recent turquoise Aquamarine. 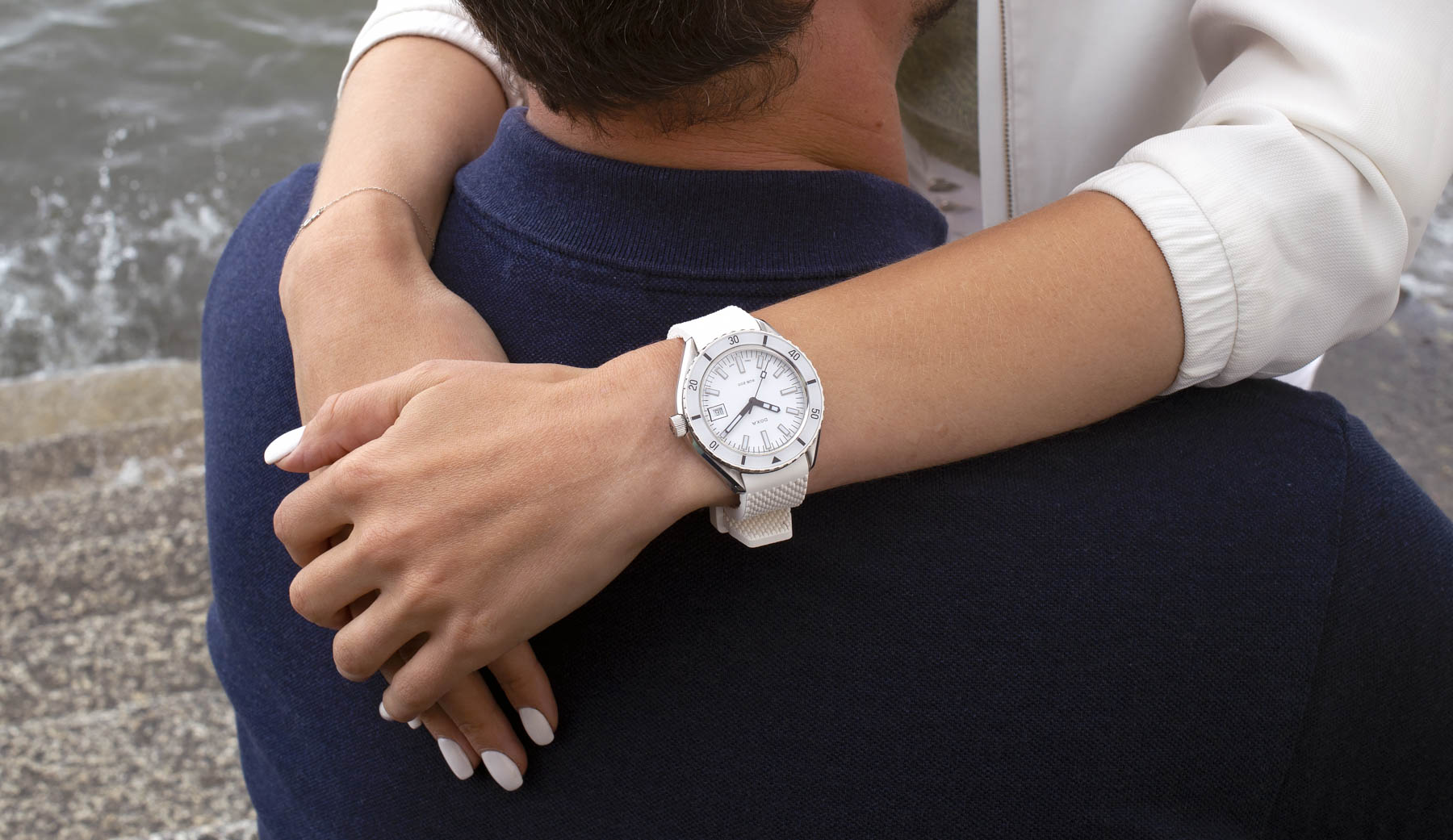 Built from 316L stainless steel, the new Doxa Sub 200 Whitepearl watch encompasses the vintage flair of its siblings with a ‘glass box’ sapphire crystal integrated with anti-glare technology. The 200-meter water-resistant case is topped with a 120-click unidirectional rotating bezel manufactured in the style of Doxa’s coin-edge profile, with deep notches for an easy grip under slippery fingers. A luminous-coated dive scale with a sapphire insert is made highly visible on the surface of the bezel for effortless measuring of elapsed time underwater. All other elements to the design remain faithful to previous models. These include polished bevels, a screwed steel case back, screw-down crown, polished and brushed case finishes, lyre-like lugs, and a 14mm case height. 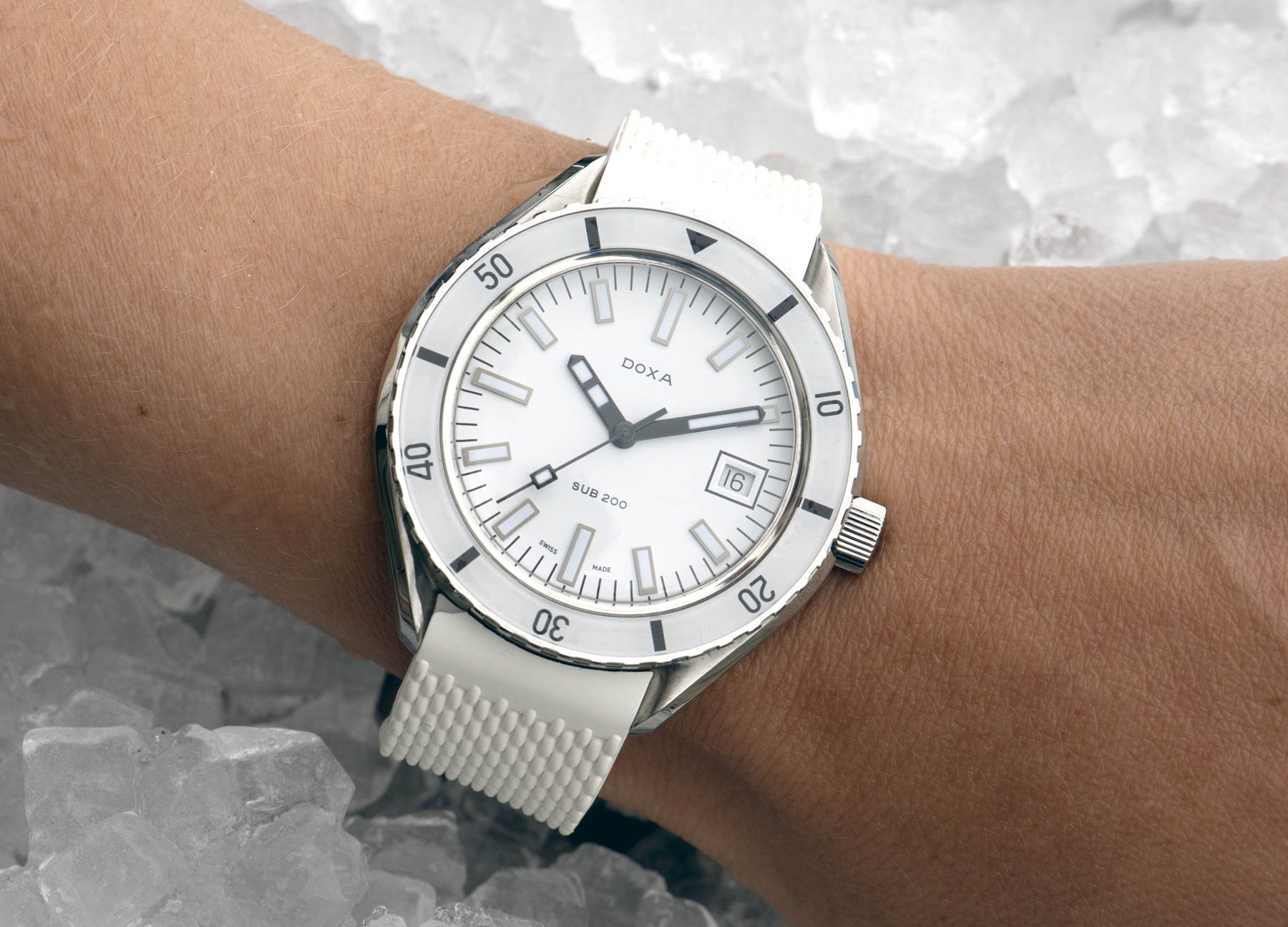 The dial of the new Sub 200 watch from Doxa is sparse in terms of detail. Apart from the brand lettering below the twelfth hour, the display features black coated hands, darkened baton indexes, a black-trimmed date window at 3 o’clock, and generously filled Super-LumiNova elements, all set against a high contrast matte white base. You could easily pair the watch with attire throughout all seasons but it becomes a particularly playful accessory for summer attire, courtesy of a simple white rubber strap. Likewise, Doxa’s classic beads-of-rice stainless steel bracelet (with a folding clasp and diver’s extension mechanism) elevates the watch considerably for pairing with something smarter. The watch is powered by the tried and tested ETA 2824-2 movement, capable of a 38-hour power reserve and an operating frequency of 28,000 beats per hour. 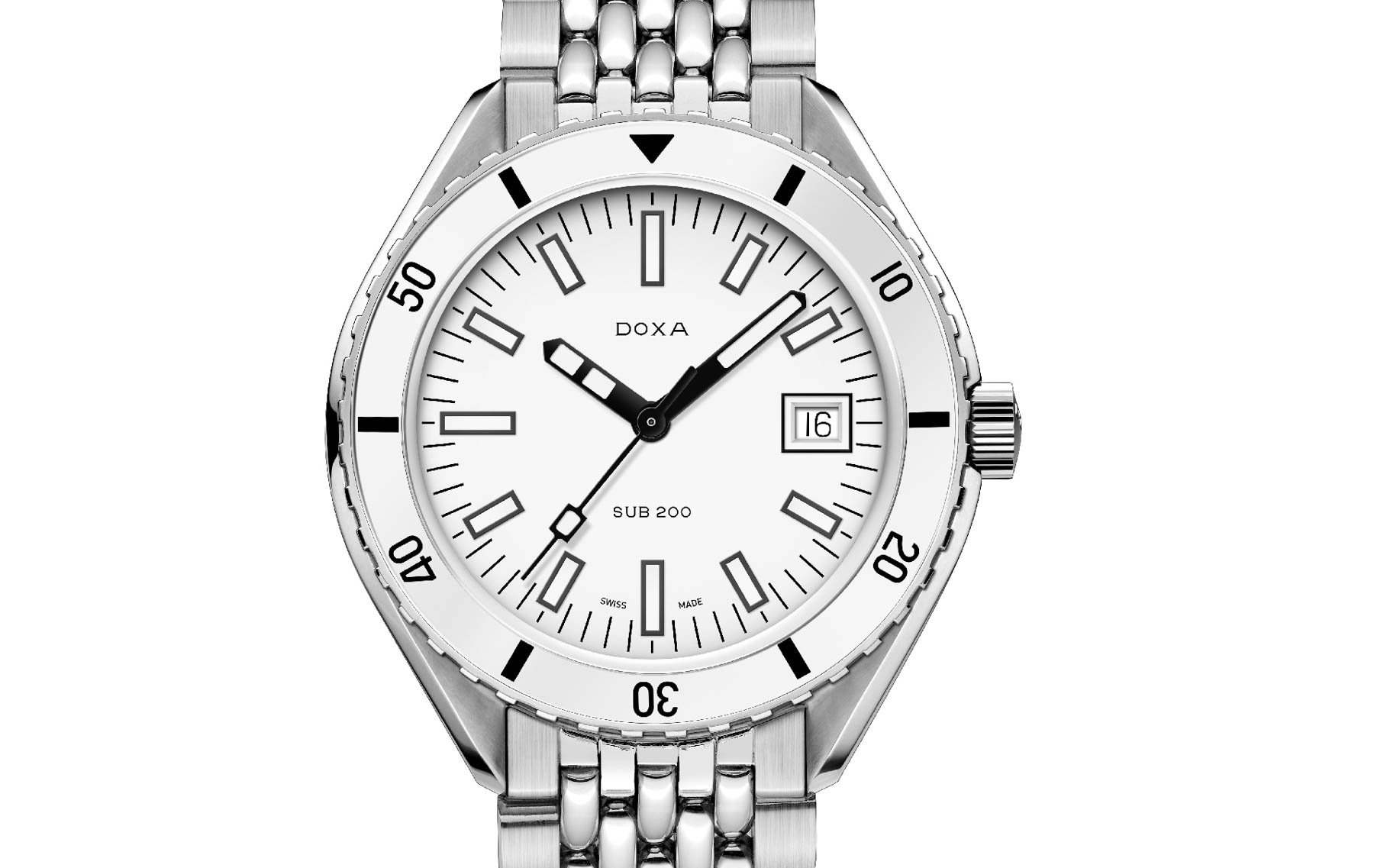 It could be that the new Doxa Sub 200 Whitepearl watch will resonate predominantly with vintage dive watch collectors more so than those with clear aquatic intentions. It wouldn’t be an unrealistic presumption to make. Dive watches are also becoming an increasingly popular style of watch to wear whether you’re partial to a wetsuit or not. The watch manages to stay south of the 2000 euro mark, which for many, will no doubt add to its appeal. You can check out Doxa’s website for more information on the Sub 200 Whitepearl watch, along with the rest of the collection here.