But is this clash of classic designs too much to stomach?
Rob Nudds
comments 1
Share

Today, I’m taking a look at the Edox Delfin Mecano model. I’m not going to beat around the bush or pretend I’m seeing something other than I am so I’ll get right to it: does anyone else get a strong Zenith Defy vibe from this model? Yes, the Zenith Defy Skeleton models have a five-spoke design where the Delfin has a more symmetrical six-spoke design, but to canter through a watch review without pointing out that glaring similarity would be professionally questionable at best, unforgivably incompetent at worst.

It is often said that there is little novelty in modern watchmaking. I would be inclined to agree in (very) broad strokes, simply because so much that can be done on the small canvases available to those of us that self-identify as watch designers has already been done, but we’re still seeing mind-blowing creativity rear its head every season from certain brands. 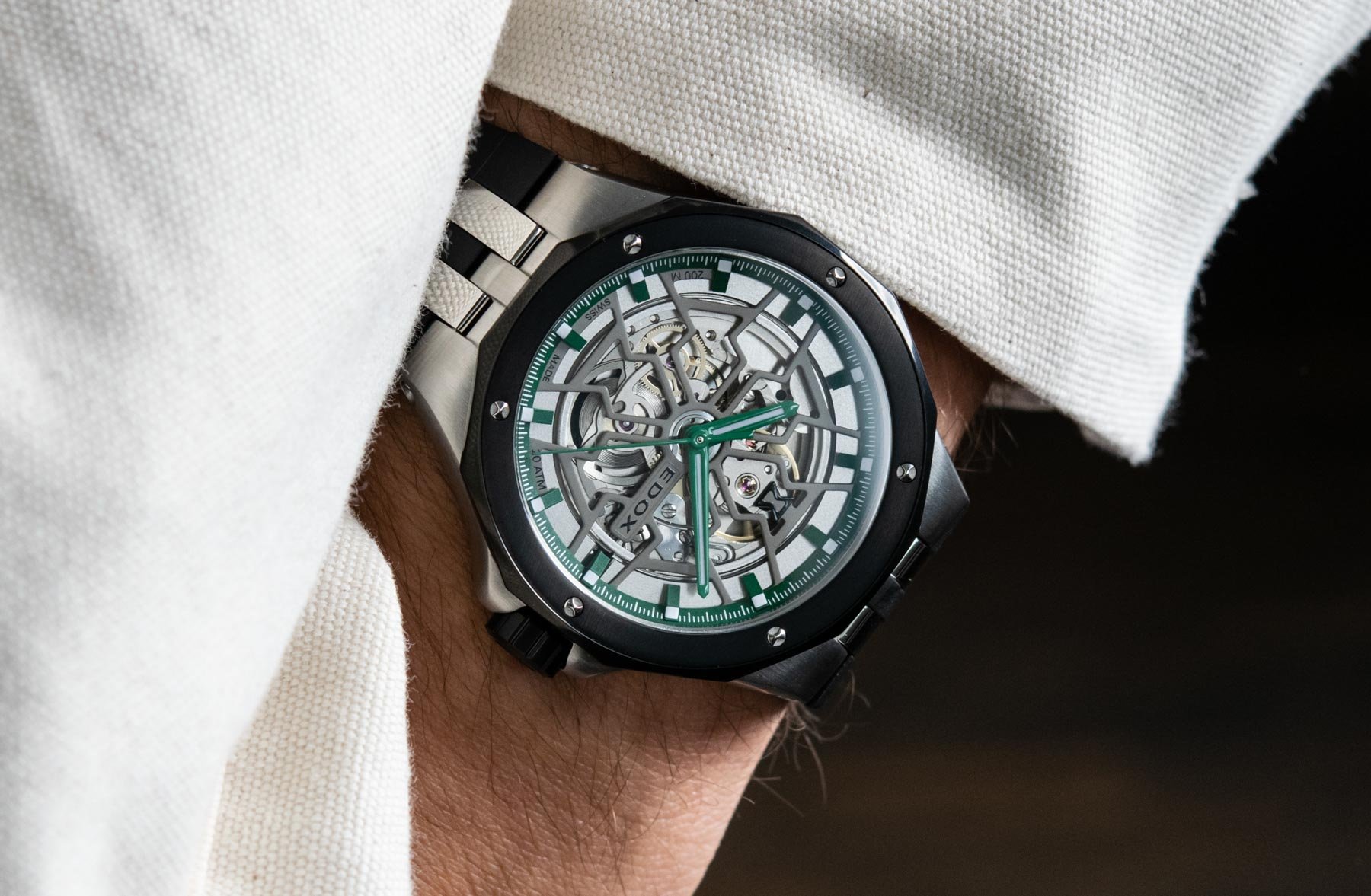 When those generation-defining moments come around, we all sit up and take notice. I’ve waxed lyrical endlessly on the subject of the H. Moser Streamliner, the Bvlgari Octo Finissimo, and the Czapek Antarctique as the modern Holy Trinity of sports watches (so much so it even popped up in a conversation I had with Luke Benedictus of Time & Tide about the project we ran with the Le Locle brand). Those three models are perfect examples of something very new. But what about the rest of the industry? What about the brands that don’t have the resources to pursue such ambitious projects? What then? 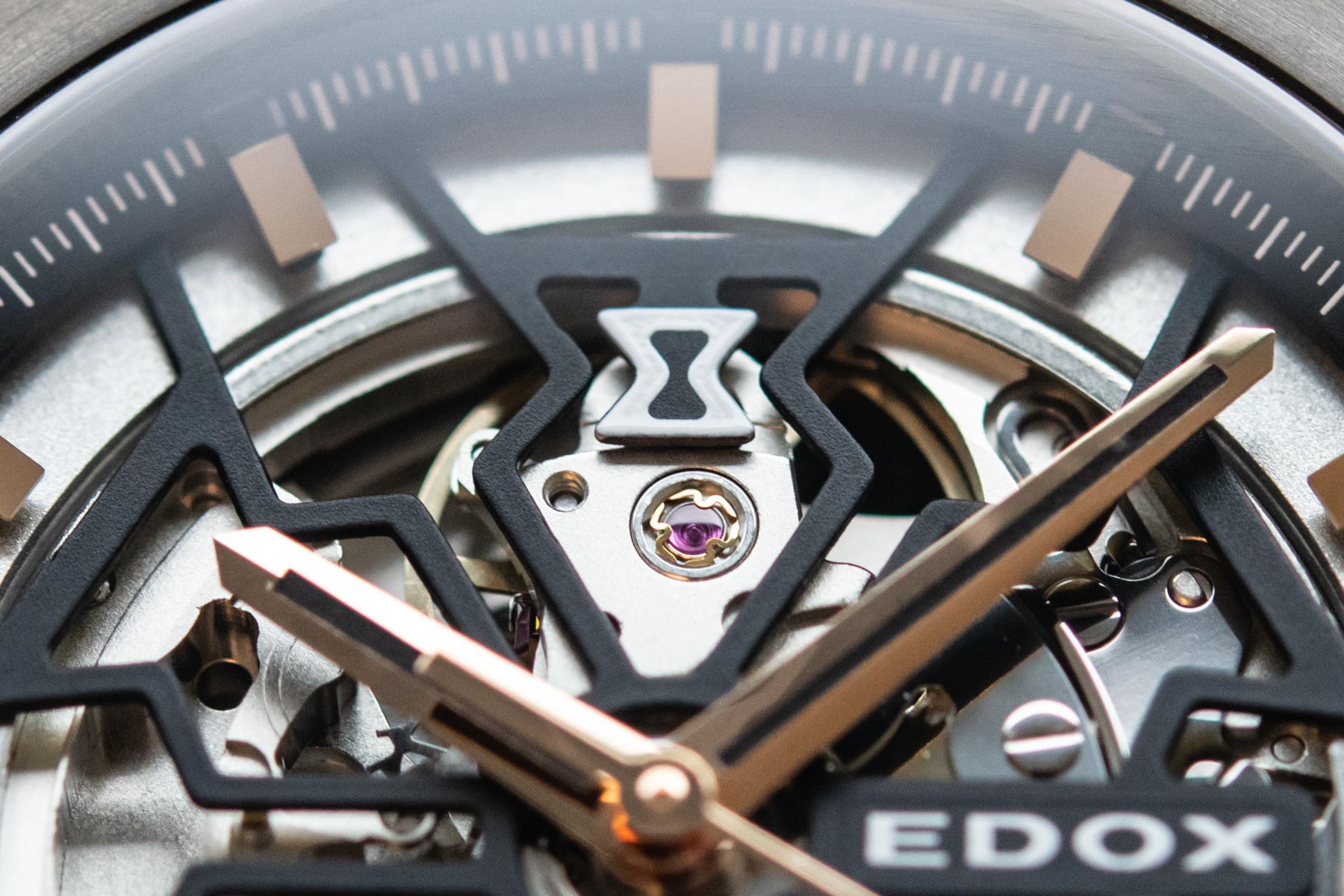 There’s nothing wrong with derivation; it’s all about execution

Derivative designs are everywhere. It is almost impossible for them not to be. That looks like it will not only continue to be the case for many years to come but also intensify as the number of consumers able to afford or access the preferential models (or “originals”, if you prefer) dwindles. 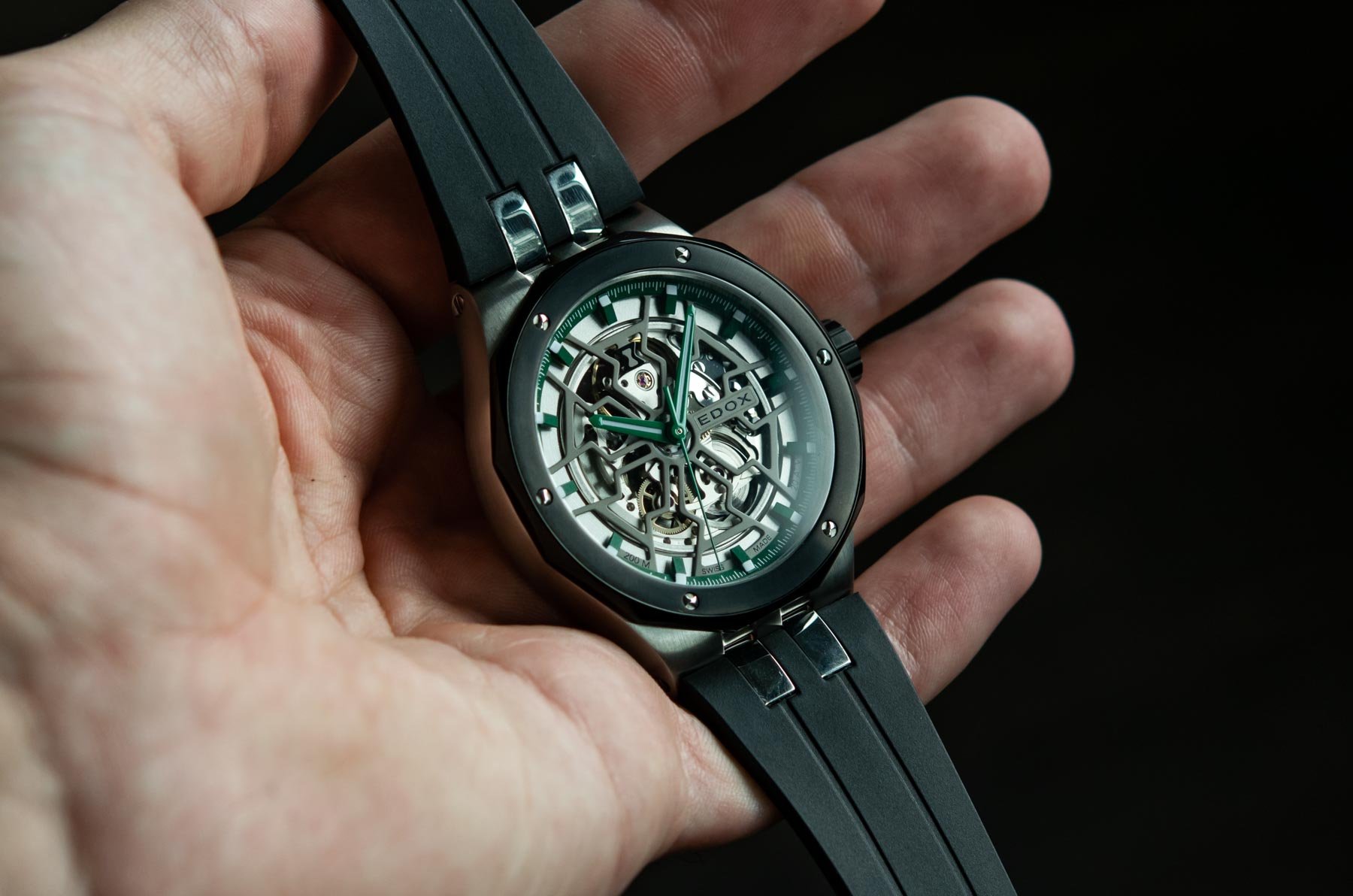 I have no problem with the sympathetic combination of existing design elements. In fact, some of my favorite brands make a living out of this! As much as I love Laventure, do you think I can’t see the brand’s blatant source of inspiration? The Nautilus is riddled throughout that design, but it is sufficiently different to be its own model. And, for those of us that always liked the Nautilus but never fell in love with it totally, it provided another take on a design that proved valuable (to me and the other Laventure buyers, at least). 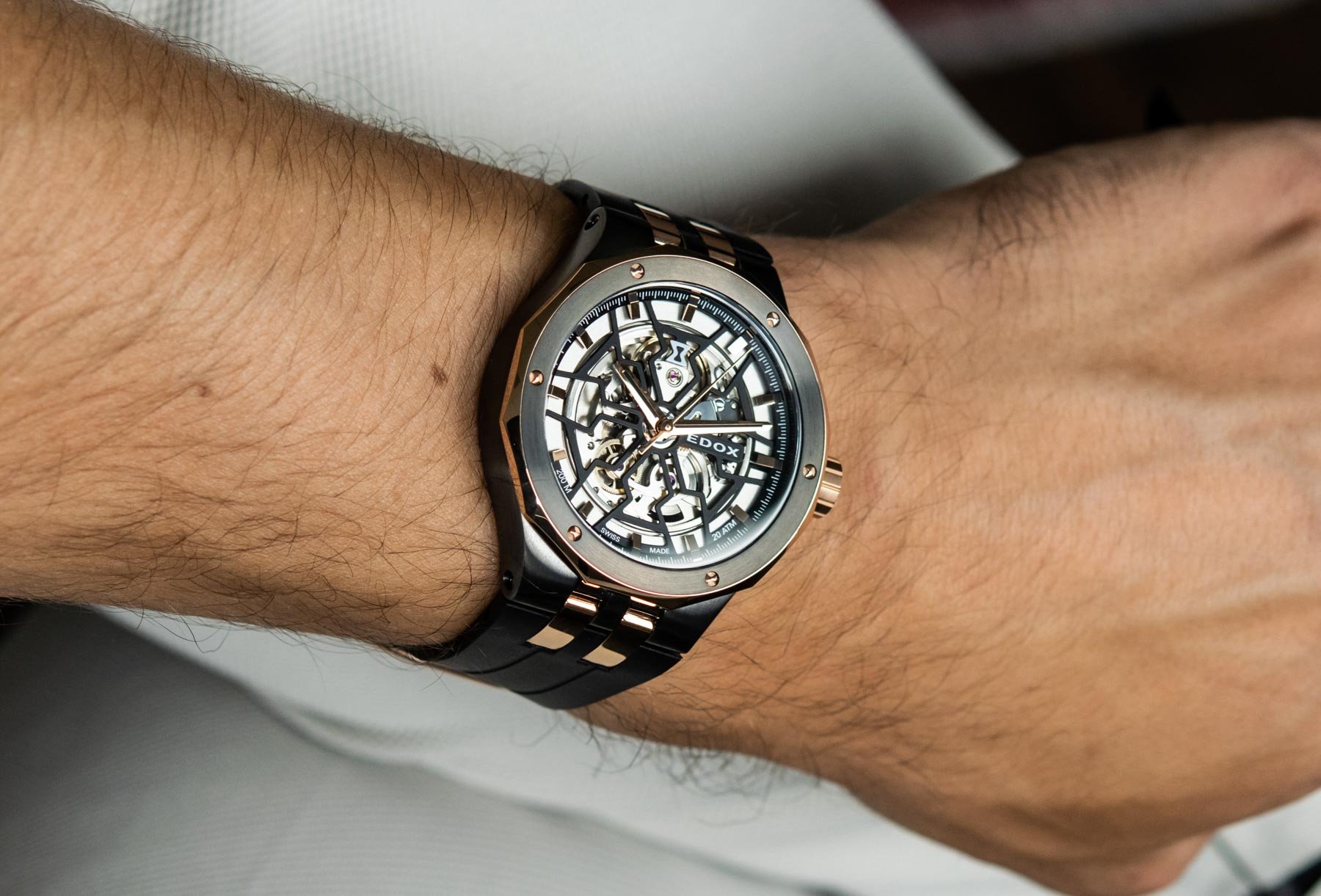 Being “inspired” by something is one thing. It isn’t the same thing as copying a watch. However, if you’re going to paddle in these inky shallows, be sure of one thing: the execution must be able to stand up to scrutiny. No one wants to feel like they’d bought a knock-off version of something else. It will always feel cheap on the wrist. It is better to buy a categorically cheaper product (like a Swatch, for example) than a cheap version of an expensive product. The former is likely to outperform your expectations; the latter, the opposite. 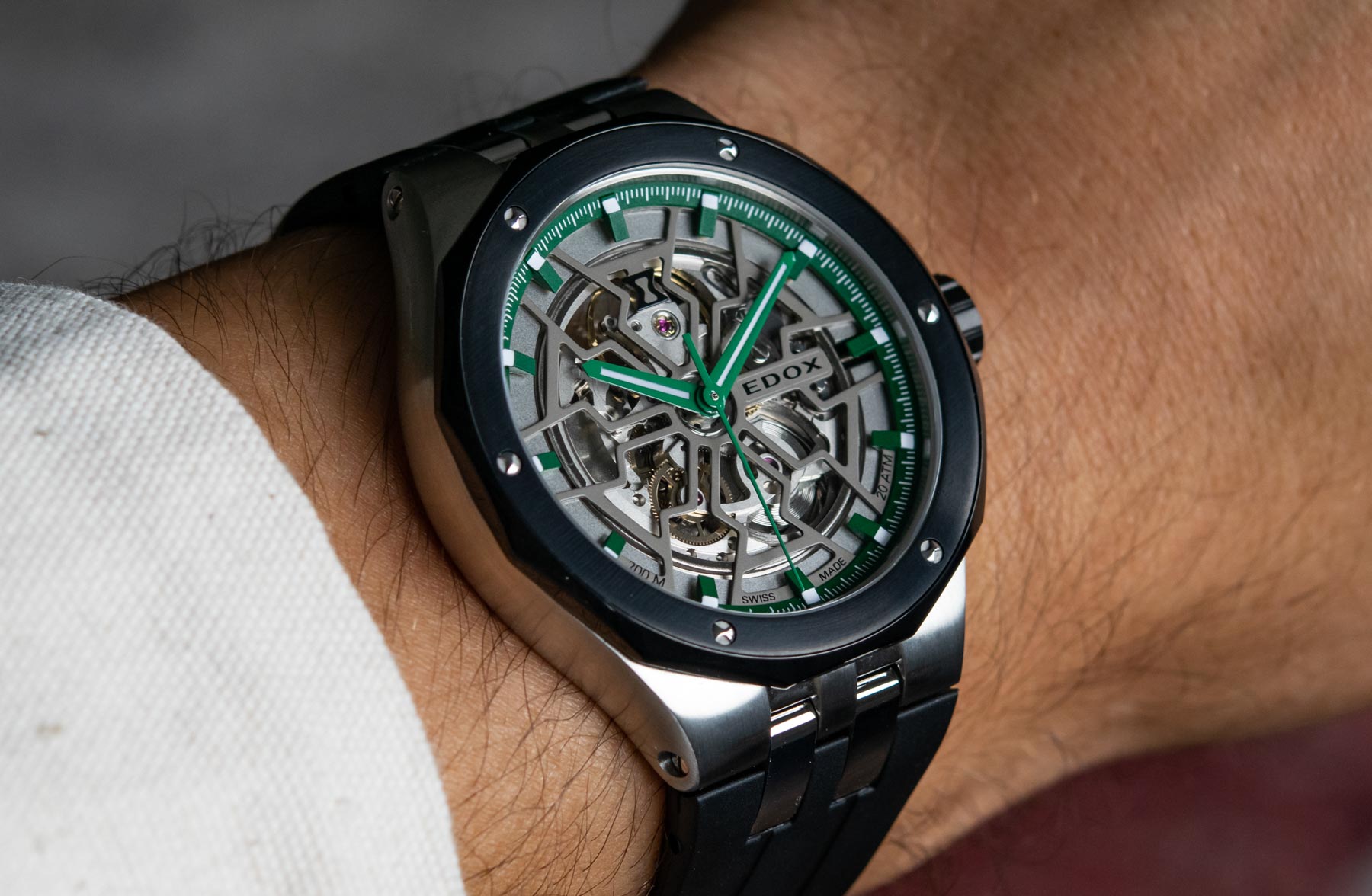 Does the Edox Delfin succeed?

In addition to the very Zenith Defy dial (which is nicely integrated with the brand logo and carries the wordmark across the horizontal axis very smartly), there is also the matter of the Royal Oak/Hublot bezel and the very AP way in which the case meets the rubber strap of this particular model. The cool thing about derivation when done well is that it can bring together a lot of individually iconic elements to create a new mashup of classic components that might, to some eyes, look better than either original (or all originals if a watch is patently inspired by several models). 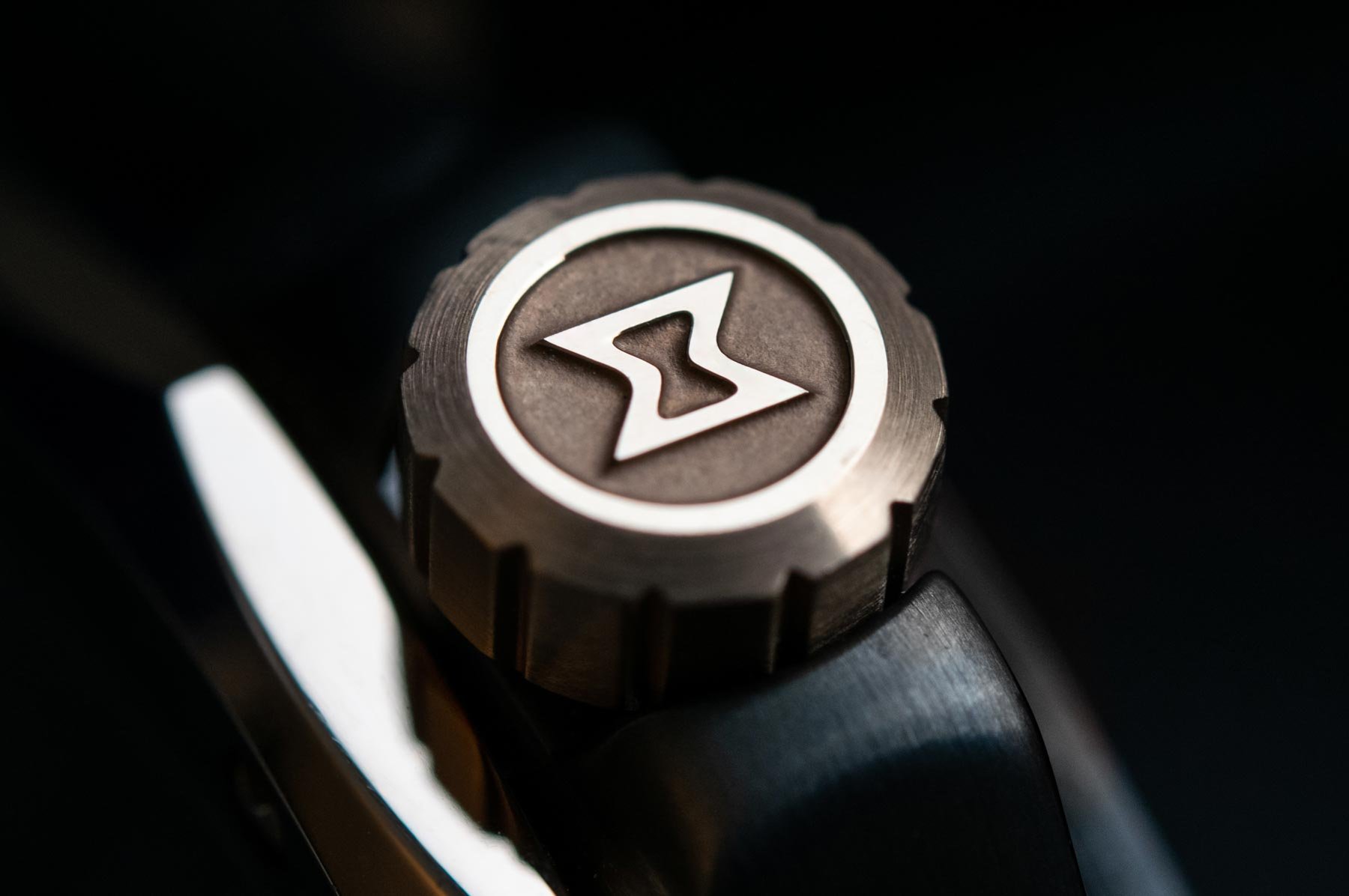 I don’t know if Edox would be annoyed with me pointing all this out, but it really doesn’t matter. If I didn’t say it, you’d still be able to see it. The only difference would be that my integrity would be more shredded than Banksy’s “Love is in the bin”. And so I’m just going to have to weather any backlash from the brand or future fallout because my conscience won’t allow any other route. 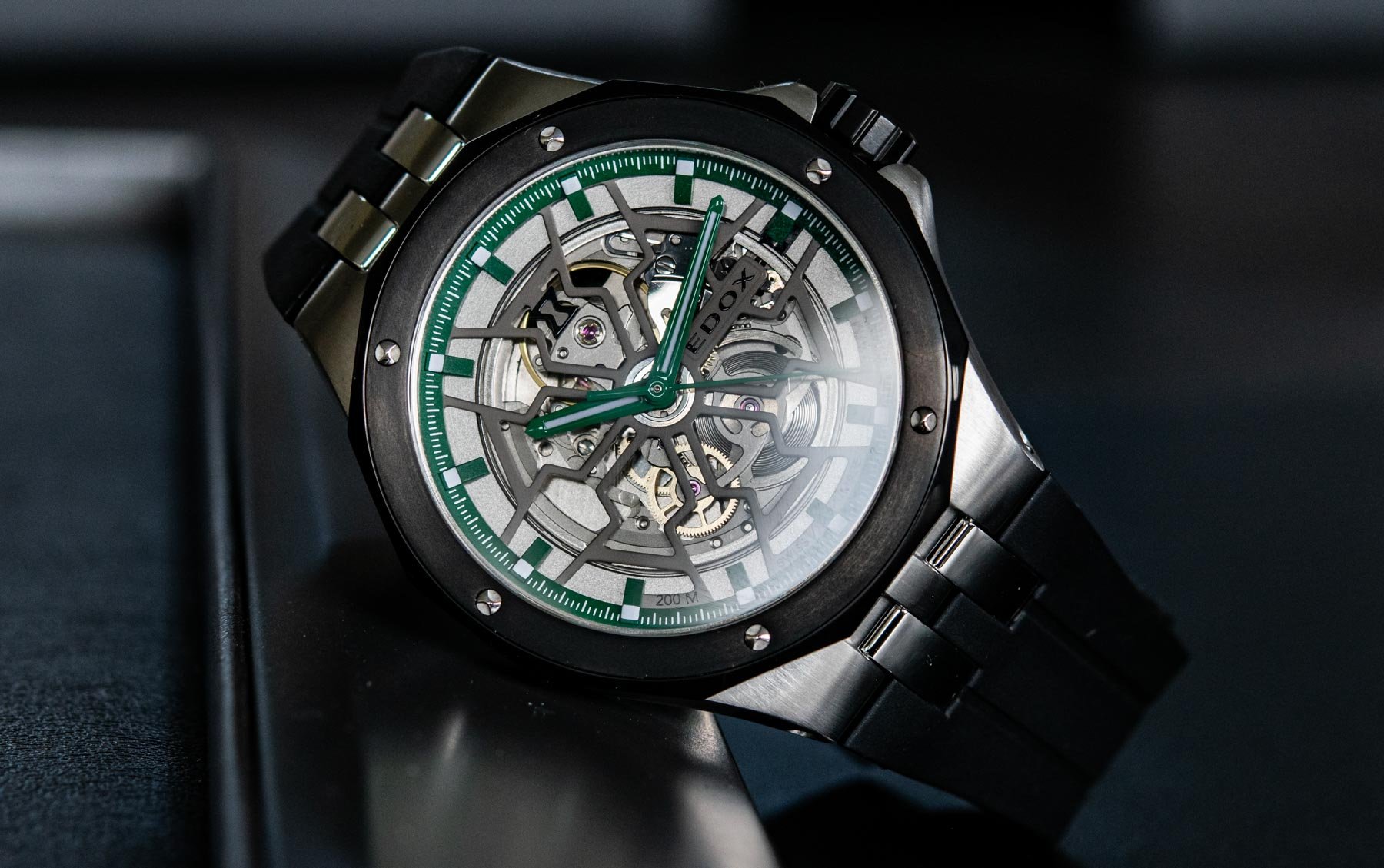 Some will point to Edox having been around since 1884 and the fact that the Delfin has been around since the ’60s, but the skeleton dial didn’t exist in 1884 and the Delfin from the ’60s looked like an entirely different watch. It wasn’t until the ’80s that the Delfin took on a bit of a Genta-esque appearance, which probably nips the Hublot comparisons in the bud. That said, a lot has happened since (and to say the current Mecano hasn’t gone even further in that direction would be mad).

So here we are. The Edox Delfin Mecano fuses a ten-sided, six-rivet bezel with a six-spoked skeleton dial. There are several versions of the model available. Pictured in this article we have reference 85303-3NN-VB, which sees the bezel accented by a vivid green time track and handset, alongside the newer reference 85303-357GNR-NRN (which is almost an inversion of the existing reference 85303-357RN-NRN). Other models, using purple spokes and another using black, are also available. The most eye-catching thing about these watches, however, has to be the referential components.

It is an uncompromising combo and one that will no doubt get plenty of attention on the wrist, given its 43mm diameter. The watch is powered by the Edox caliber 853, which is “based on” the Sellita SW-200. Certain elements of the caliber have clearly been cut away to reveal more of the mechanics and to make the most of the see-through dial. The result is similar to that of my beloved WH&T LCF888 chronograph, which itself aped the concept chronographs of Audemars Piguet. Did I have a problem with that model? No. And I don’t have a problem with the Delfin Mecano from Edox either. 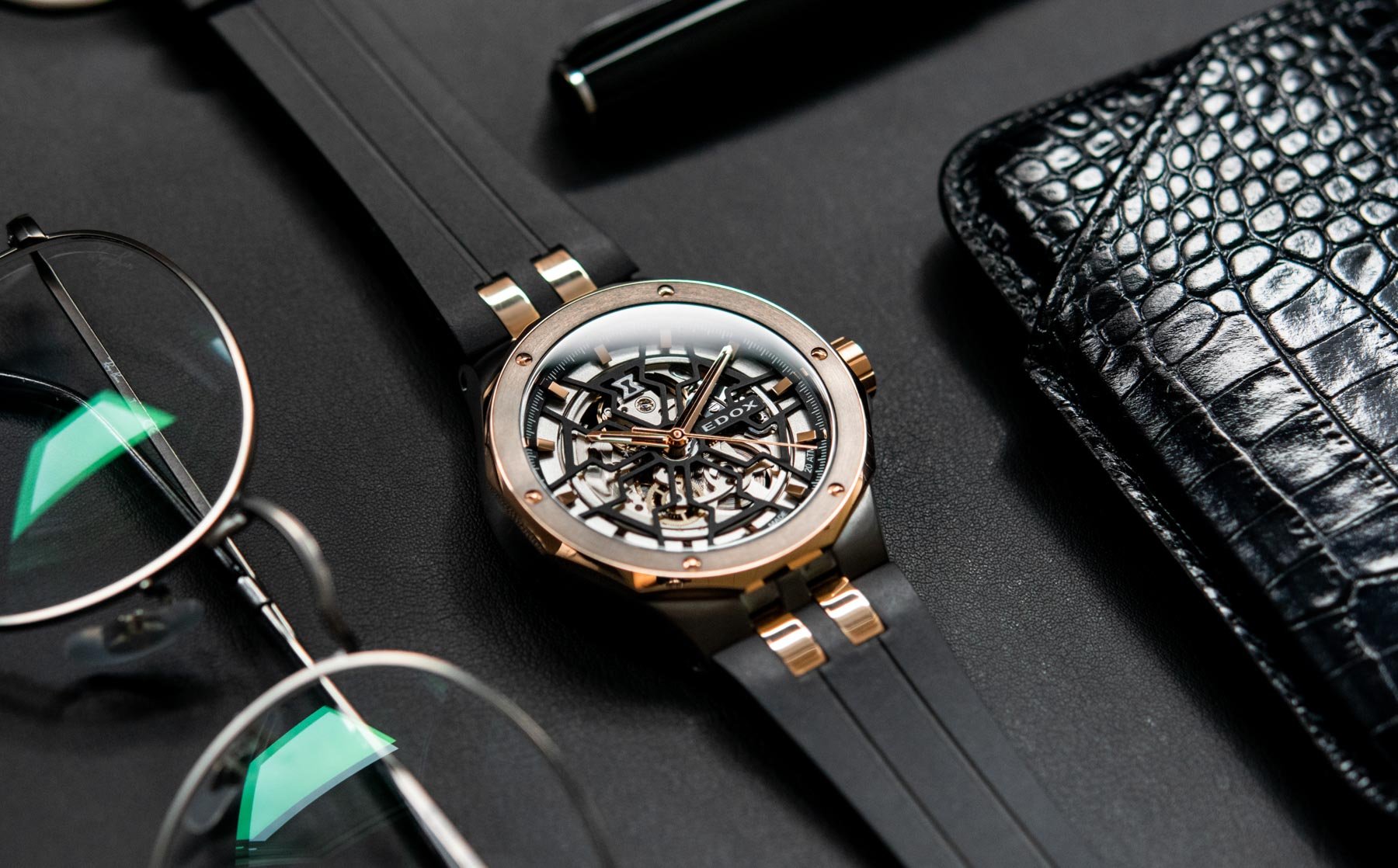 Is it worth it?

The interesting this about this Edox (aside from the striking visual) is its price. The Edox Delfin Mecano retals for €1,550. Considering the materials, ambitious design, and, ultimately, unique aesthetic, there will be a great many people interested in this watch at this price. I do think Edox has made the right decision here in terms of quality and has ensured that this model lives up to the expectations of a timepiece in this price bracket.

Will it struggle to compete with more original designs from rival brands in the same price sphere? I reckon it will, but it has a very strong sense of style, which should see it remain a firm favorite of those looking for a serious “wow” factor on a relative budget. While I’m all for responsible derivation provided the objective material quality remains high, the end result in this case is not one for me personally. At 43mm and with a design that could probably be heard from Jupiter, this is one wrist weapon I don’t feel able to handle. Learn more about the Edox Delfin Mecano here.