Endeavour Cylindrical Tourbillon And LM101 By MB&F And H.Moser & Cie

There are many similarities between MB&F and H. Moser & Cie, the most notable one being the fact that both companies are prominent Haute Horlogerie brands. Obviously, they both come from Switzerland and have a charismatic leader helming their ships. Furthermore, through H. Moser & Cie’s sister company, Precision Engineering AG, they have been working together for over 10 years. Lastly, 2020 marks the 15th birthday/rebirthday of both brands.

MB&F was established 15 years ago by industry veteran and visionary Max Büsser. In the same year, the brand H. Moser & Cie is relaunched after a long sleep caused by the quartz crisis at the end of the 1970s. This double anniversary, as well as their decade long friendship, ignited the passion to create something together. Not one timepiece, but two. Say hello to the Endeavour Cylindrical Tourbillon and the LM101 MB&F × H. Moser.

According to Max Büsser, the initial idea to create a Performance Arts piece with the support of H. Moser was his.

“When I called Edouard [Meylan, CEO of H.Moser & Cie] to tell him that I wanted to collaborate on a creation, I mentioned that I really liked the double balance-spring, the Moser fumé dials, and the Concept watch series. Edouard immediately told me that he would let me borrow these features, but on condition that he could also reinterpret one of my machines. I firmly believe that mixing DNA creates interesting results, so why not try the experiment in watchmaking? I therefore agreed and suggested the FlyingT model, which is particularly dear to my heart.”

What started out as one watch, eventually became a project of two very distinct timepieces. Both are available in several versions, with a 15-piece limitation to honor their anniversaries. 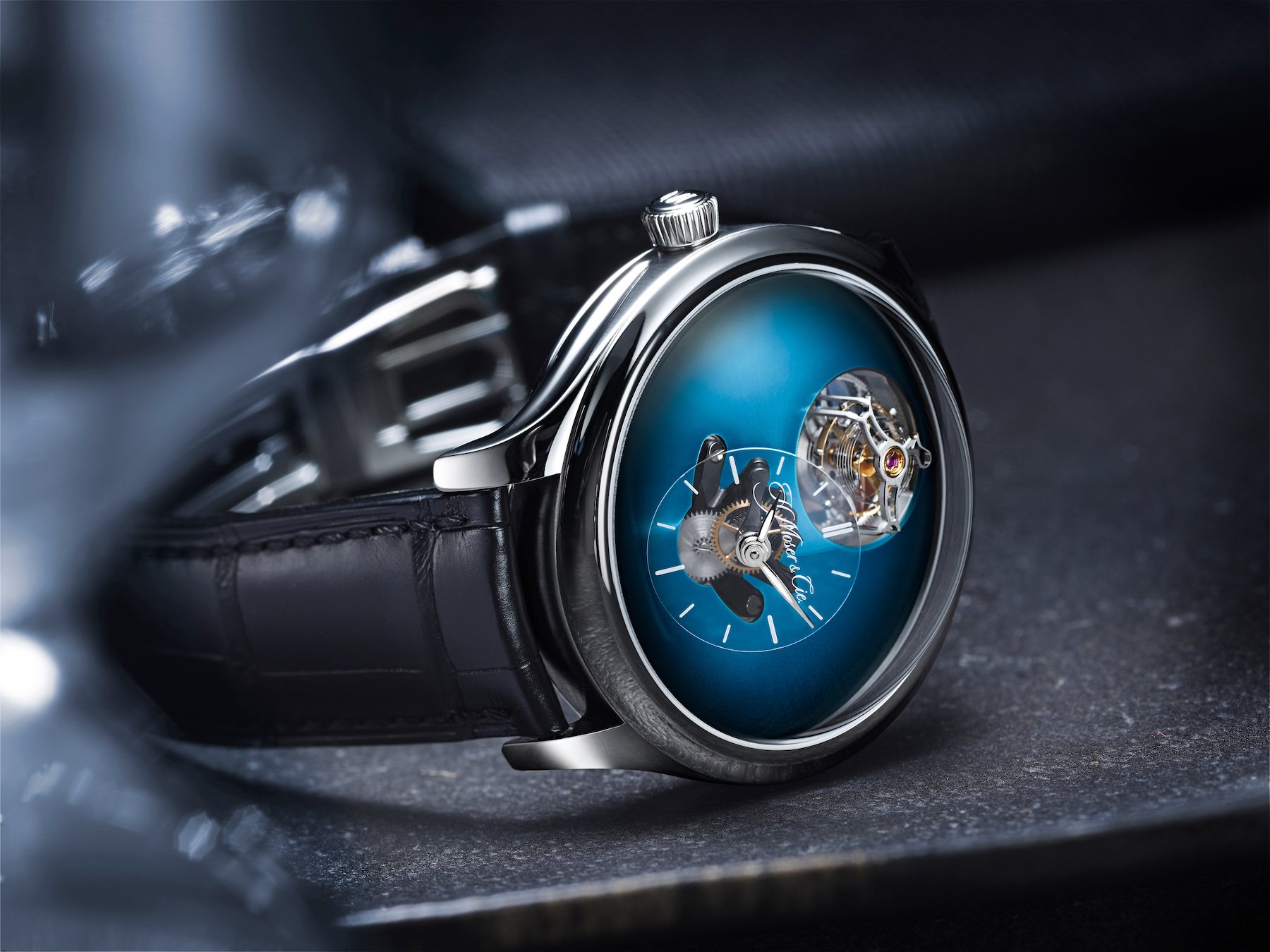 The more complex of the two MB&F × H. Moser & Cie timepieces is the Endeavour Cylindrical Tourbillon. It is a three-dimensional masterpiece. For this project, Moser used the 3D movement concept for which MB&F is known. The steel case and the vibrant fumé dials (available in five colors) are Moser’s own. Although, the center of attention is the one-minute flying tourbillon.

…to highlight the beauty of the fumé dial, the sub-dial for the hours, minutes, and seconds is made from clear sapphire.

Thanks to a ventricular opening at 12 o’clock and a cylindrical balance spring, the flying tourbillon rises above the dial. Moser added another MB&F feature to the Endeavour Cylindrical Tourbillon — the 40° tilted dial for the hours and minutes. The dial is on a conical gear train that ensures ideal torque transmission. Additionally, to highlight the beauty of the fumé dial, the sub-dial for the hours, minutes, and seconds is made from clear sapphire. With only a faint, watermark-like logo on it, the sub-dial blends into the background. 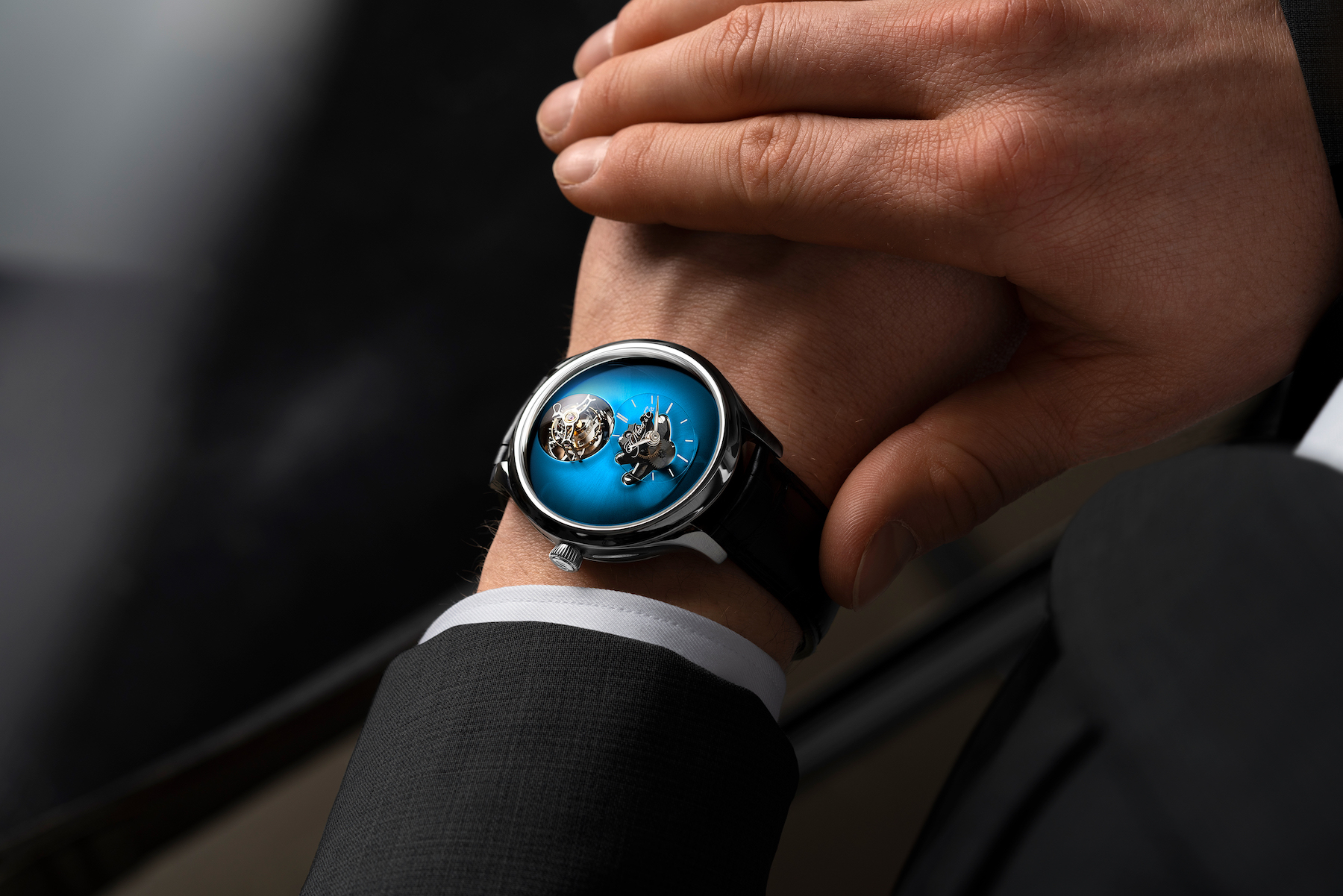 The Legacy Machine 101 is a refreshingly new approach to one of MB&F’s signature models. A timepiece where the balance wheel, the power reserve, and the passing of time get equal representation. For this MB&F × H.Moser & Cie collaboration, the approach was “back to basics”. As the Legacy Machine was one of the simplest in the brand’s line up, this was the perfect timepiece to work on. Moser is all about minimalism. Here we see MB&F’s interpretation of that ideology. Consequently, logos and sub-dials are not present.

Just like back in the day, the watch face is clear. Only the movement is singed. Moreover, the incredibly beautiful Moser fumé dial serves as the backdrop for the exquisite suspended balance wheel. You get to choose between one of four different fumé dials to sit beneath the domed sapphire crystal. And if that weren’t special enough for you, the case is made from a very unusual material for the brand.

Steel. That’s right — an artful dial and movement finishing/presentation like few others in a practical and hard-wearing case. Another bonus? The price… 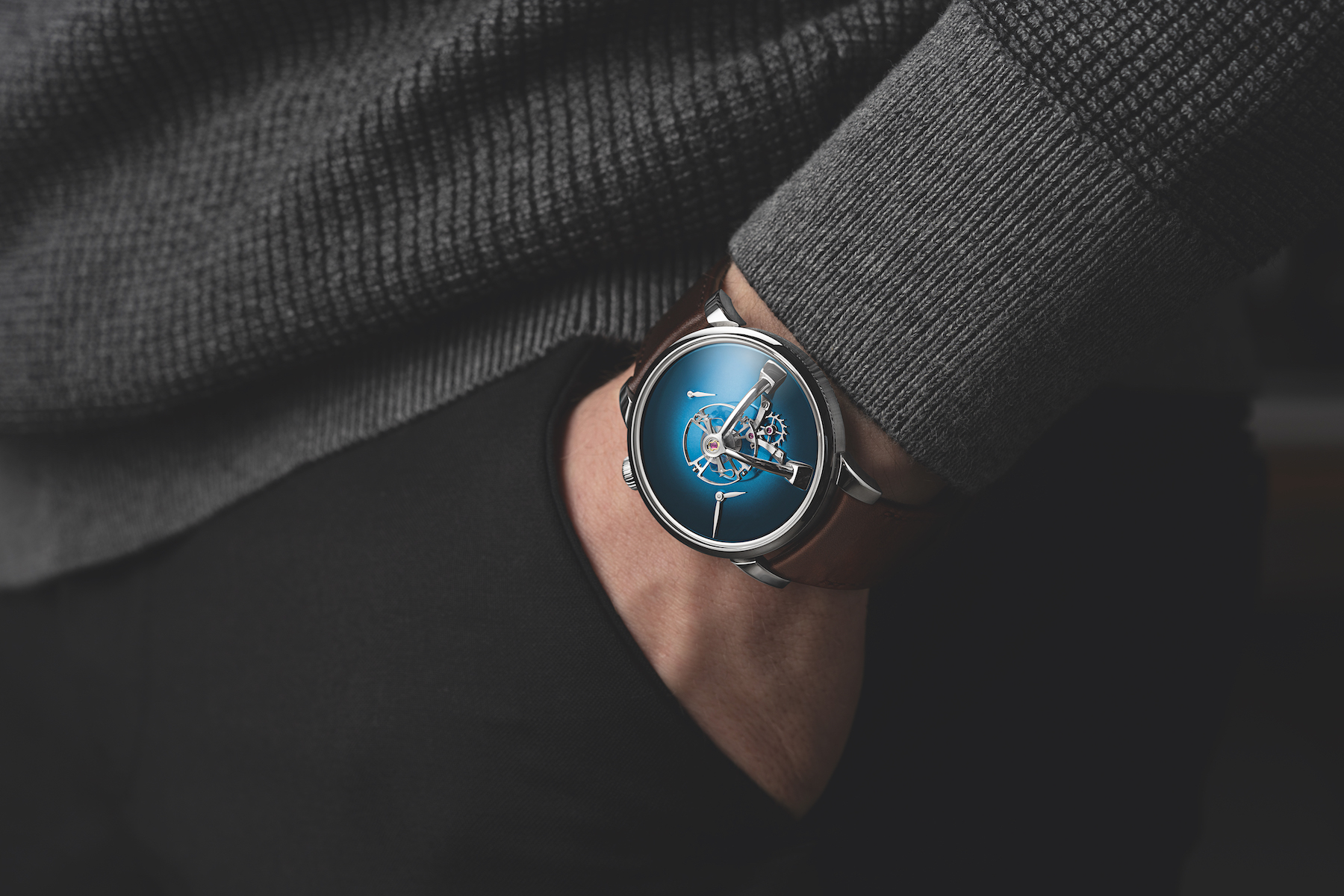