This year’s Baselworld was a treat for everyone who loves vintage watch reeditions. A lot of brands released a number of cool reinterpretations of old models. Certina, a brand that albeit has a huge history, mostly creates contemporary watches also blessed us with something special. It is the Certina DS PH200M, a diver that is the descent of the legendary PH200M from 1967. This was a memorable release for a number of reasons. Just to mention one, as I said it above, Certina was never the brand that focused too much on their heritage models. Whether it was a conscious move or not I don’t know but I’m happy the DS PH200M came to production. 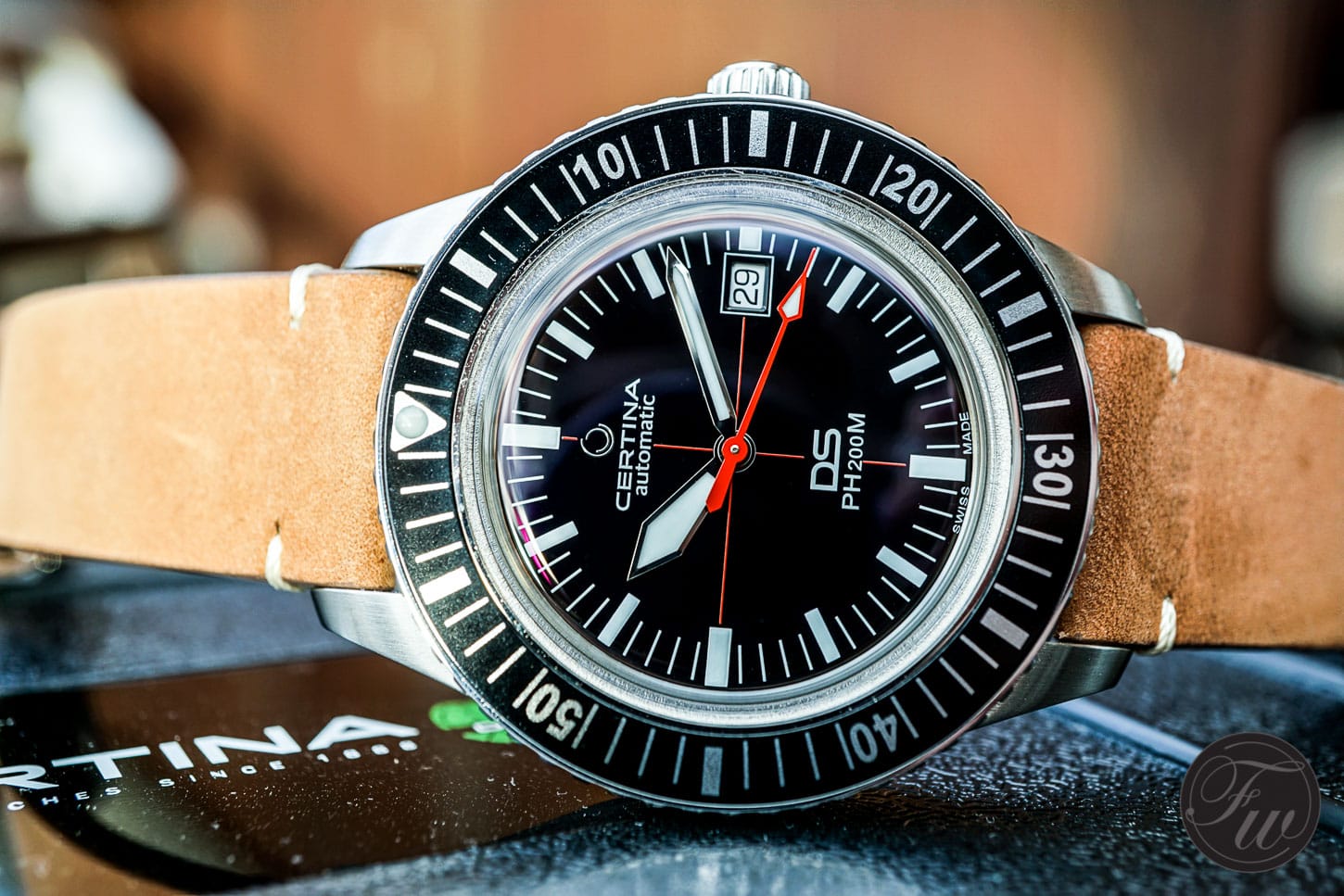 The DS (DS stands for double security) is a trademark system of Certina. Anyone who knew the brand has probably heard of it. Its main feature is a thick rubber seal that surrounds the movement inside the case. Serving as water seal and shock absorber it deadens any impact the watch should suffer. Think of it as a car’s suspension that softens the unevenness of the road. Certina used the DS from 1959 all the way until the very end of 1970. For the new DS PH200M Certina used this very system, the same as one could find in their old models. This is of course not the only similar feature between the two. The dial design, hands, bezel even the crown look almost exactly the same. Overall the watch shows a striking resemblance to the vintage version. The only difference is the size, the new model is a bit larger. 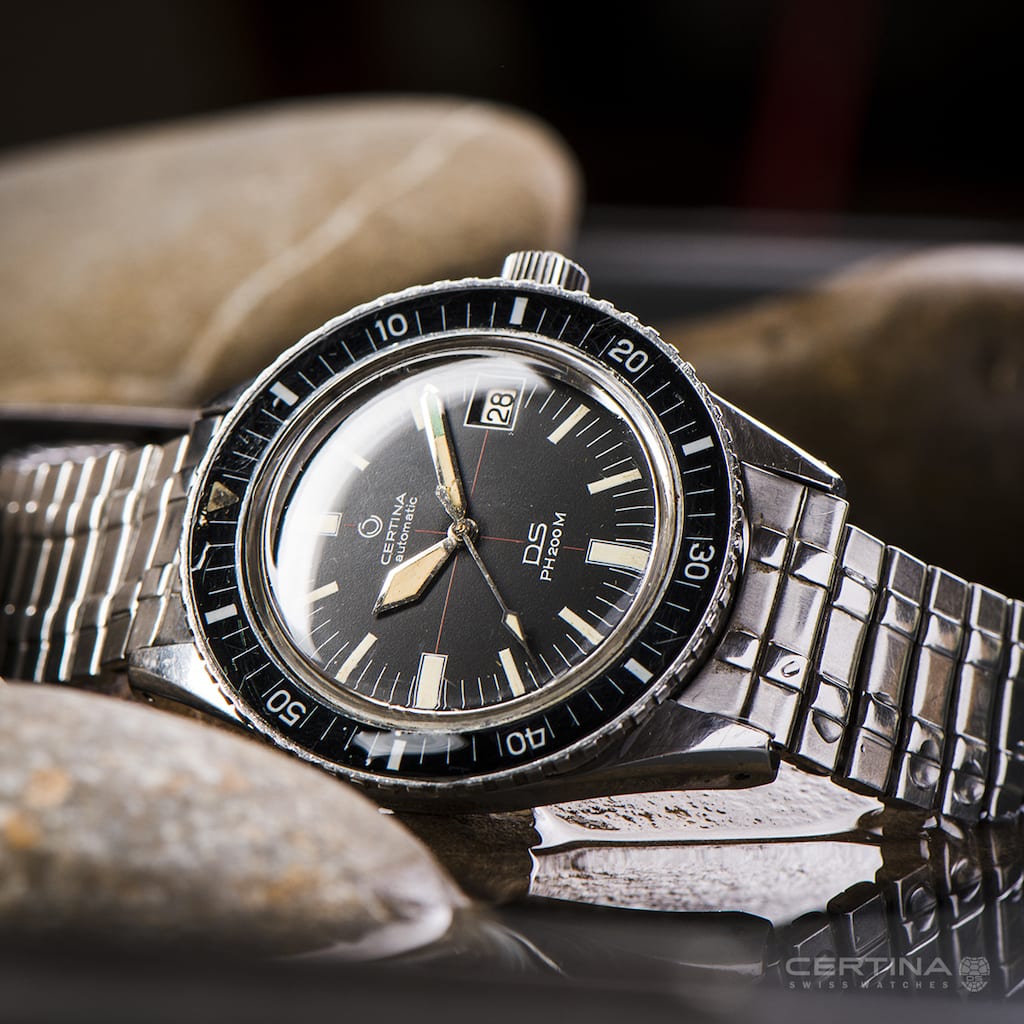 Let’s not forget that the Certina DS PH200M is a modern diver first and a re-edition of a vintage model second. The case size 42.9mm (measuring with the bezel, 41.1mm without it) is almost 3mm larger than the vintage version. Due to the hesalite crystal, it sits 14.4mm thick on your wrist. The lug end to lug end length is 51.9mm. It’s not a small timepiece at all. I personally would have loved to see it a few millimeters smaller but that’s my personal taste. The whole case is brushed 316 L steel, the only polished parts are the case back and the bezel. Speaking of which, the bezel is 60-minute diver style, uni-rotating with a lume dot at 12. Not as smooth as a Rolex Submariner’s or Omega Seamaster’s but it gets the job done and for the price of the DS PH200M it’s a perfectly fine bezel. 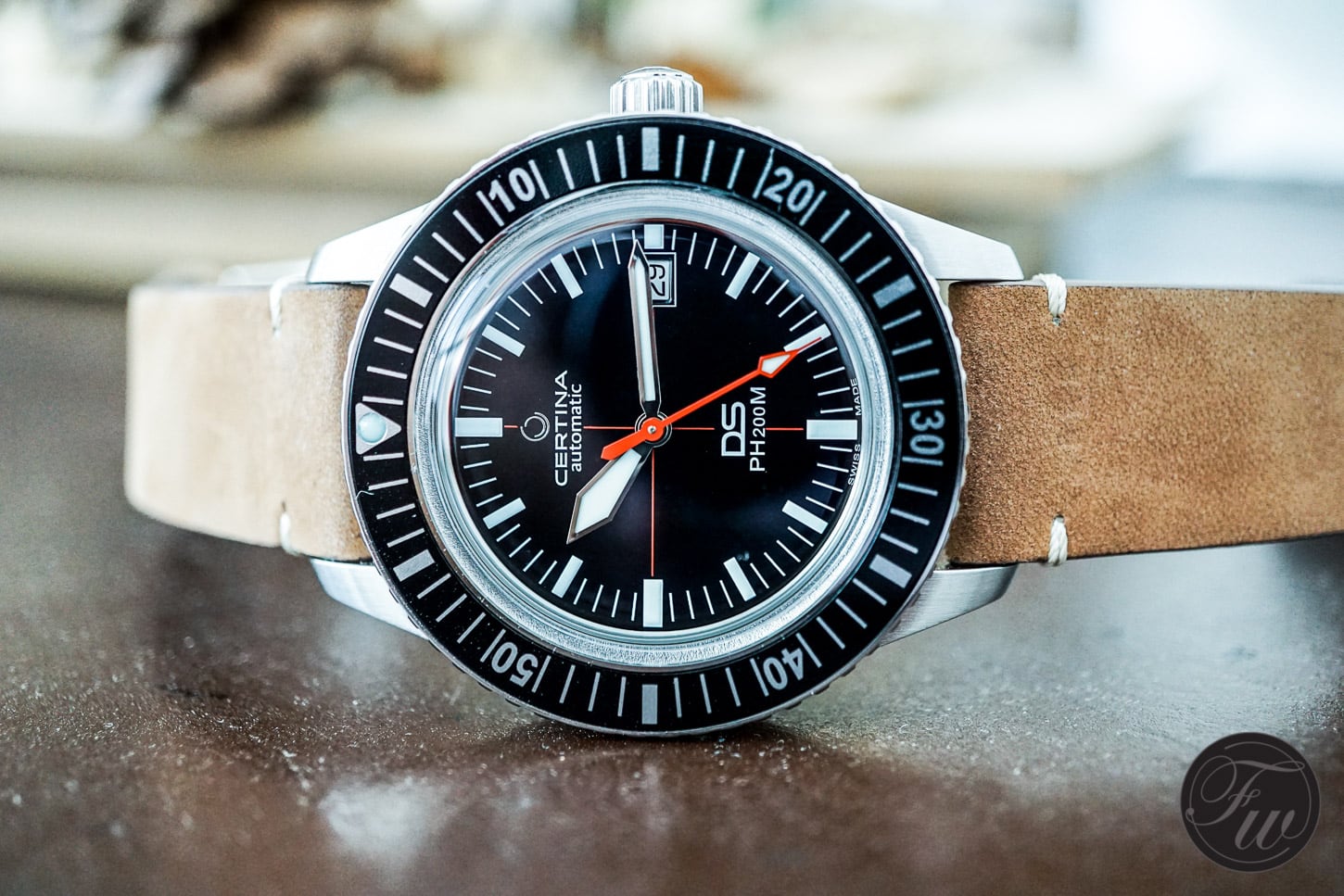 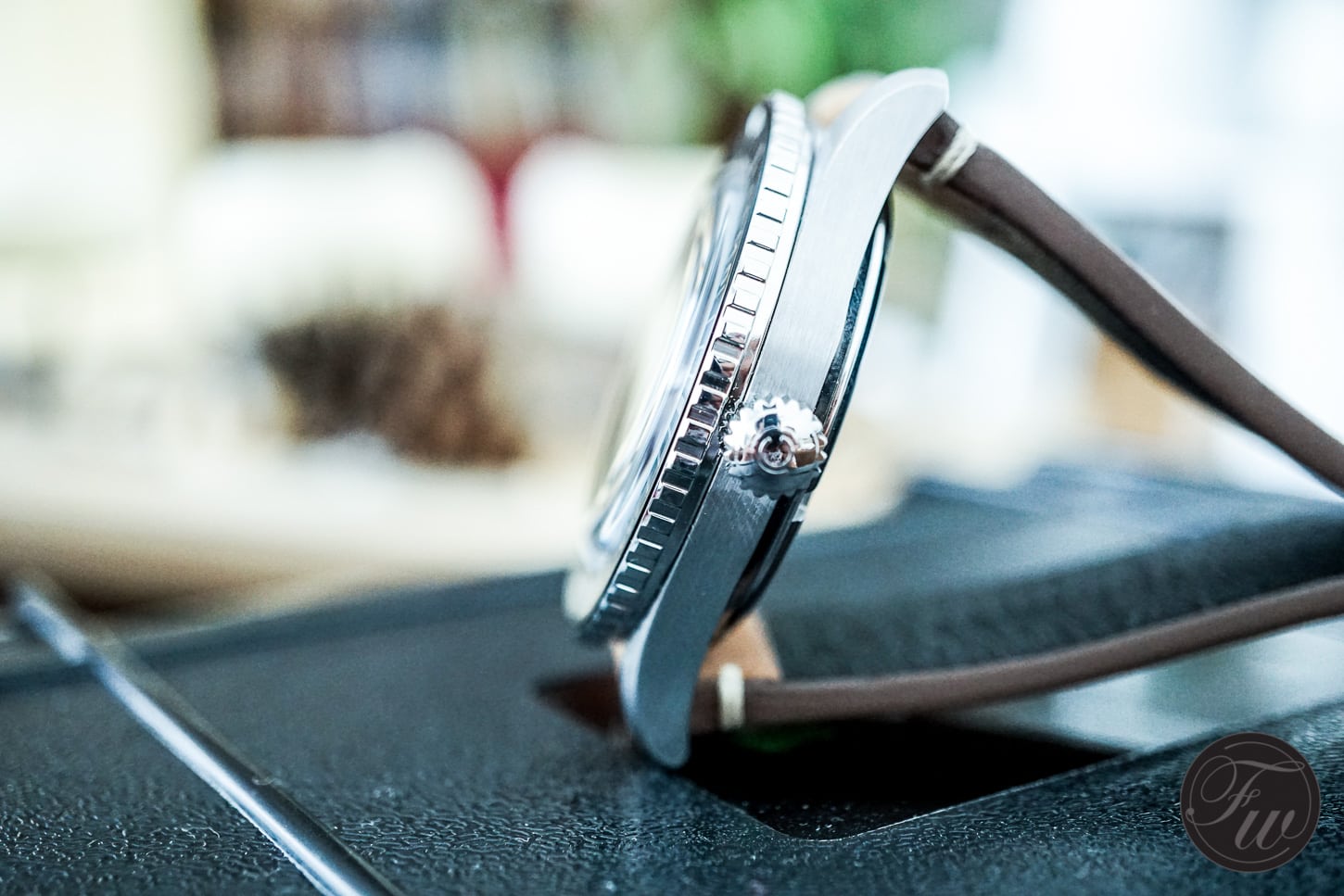 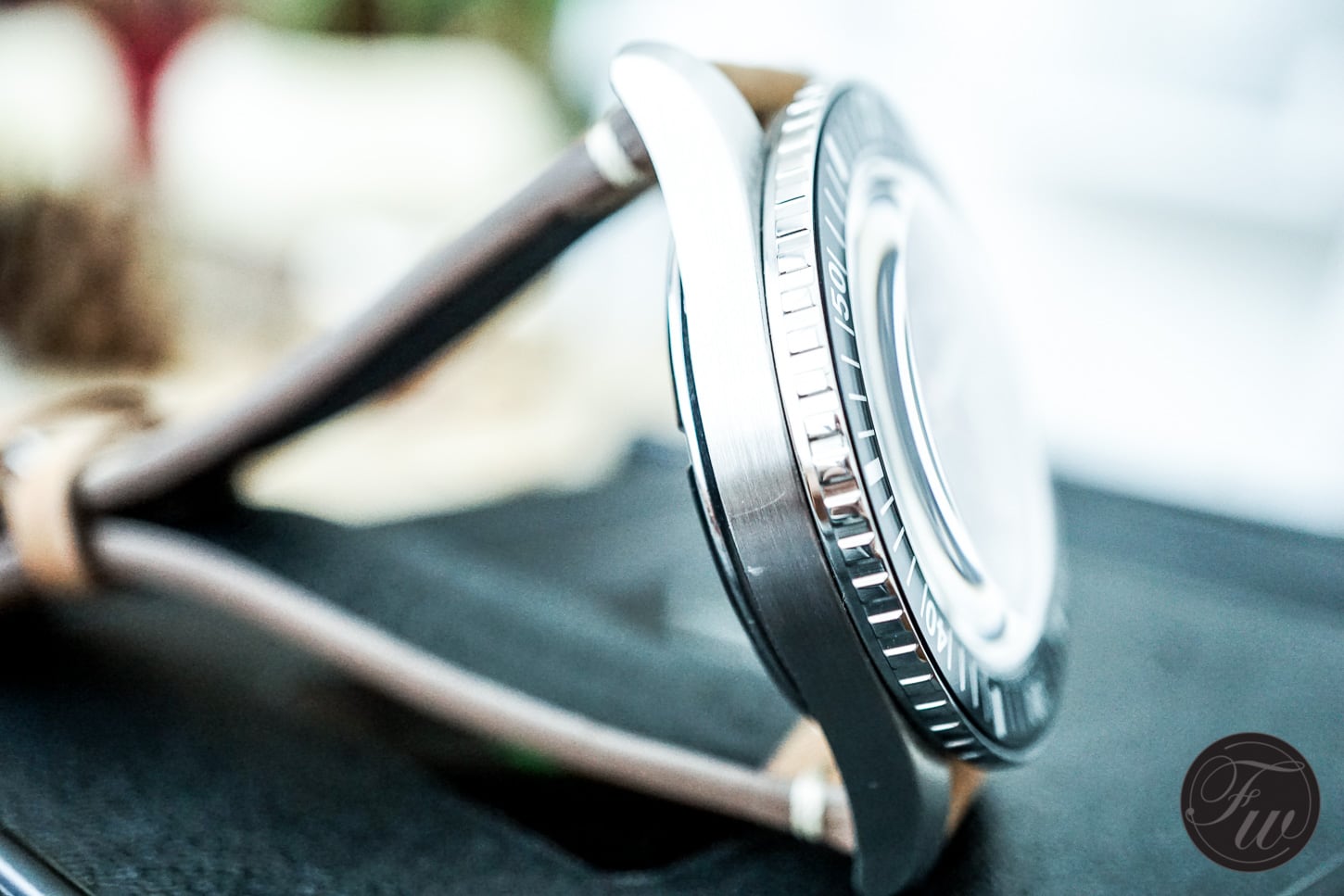 The crown (just like the case back) is screw-in with 2 positions (1st for the date, 2nd for time setting). If we flip the watch over the first thing that catches our attention is the Certina Turtle logo on the back. This has been on Certina DS models since the early 60’s. The turtle’s shell symbolizes the indestructibility of these timepieces. The turtle motif and Certina became somewhat inseparable during the years. Any vintage watch guy knows that if they see a Certina with such a back, they better get that piece. The back on the Certina DS PH200M contains the usual information. Data such as; reference number, model name, case material or water resistance. As its name suggest the PH200M is water resistant up to 200 meters or 20 bars. 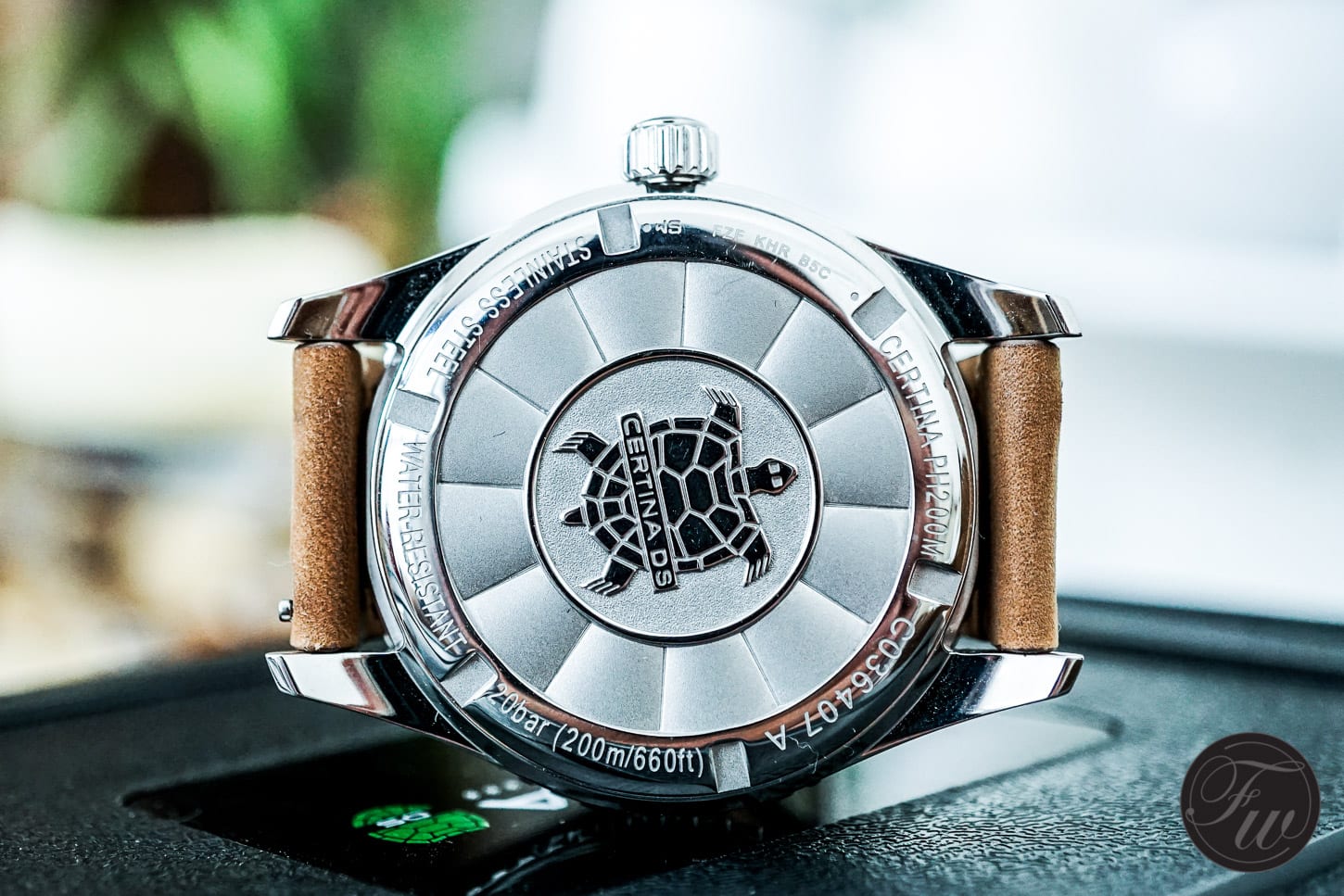 Certina made sure that the dial also stays true to the original PH200M. Yet they did not “overdo” it. There is no fake patina lume or deliberately aged dial. You won’t find any numerals either, only large Super-LumiNova covered indexes. The dial has black lacquer finish with the trademark red crosshair in the middle. The large sword hands are polished and also have Super-LumiNova inserts. The second hand is the same red as the crosshair. The date window, just like in case of the old model, is at the 3 o’clock position. At 12 right under the index, you can find the Certina C logo and the name underneath. At 6 there’s the model name; DS PH200M. Every text is whit like the indexes, the logo is the same silver as the hands. As per above, the crystal slightly domed hesalite, another vintage touch. 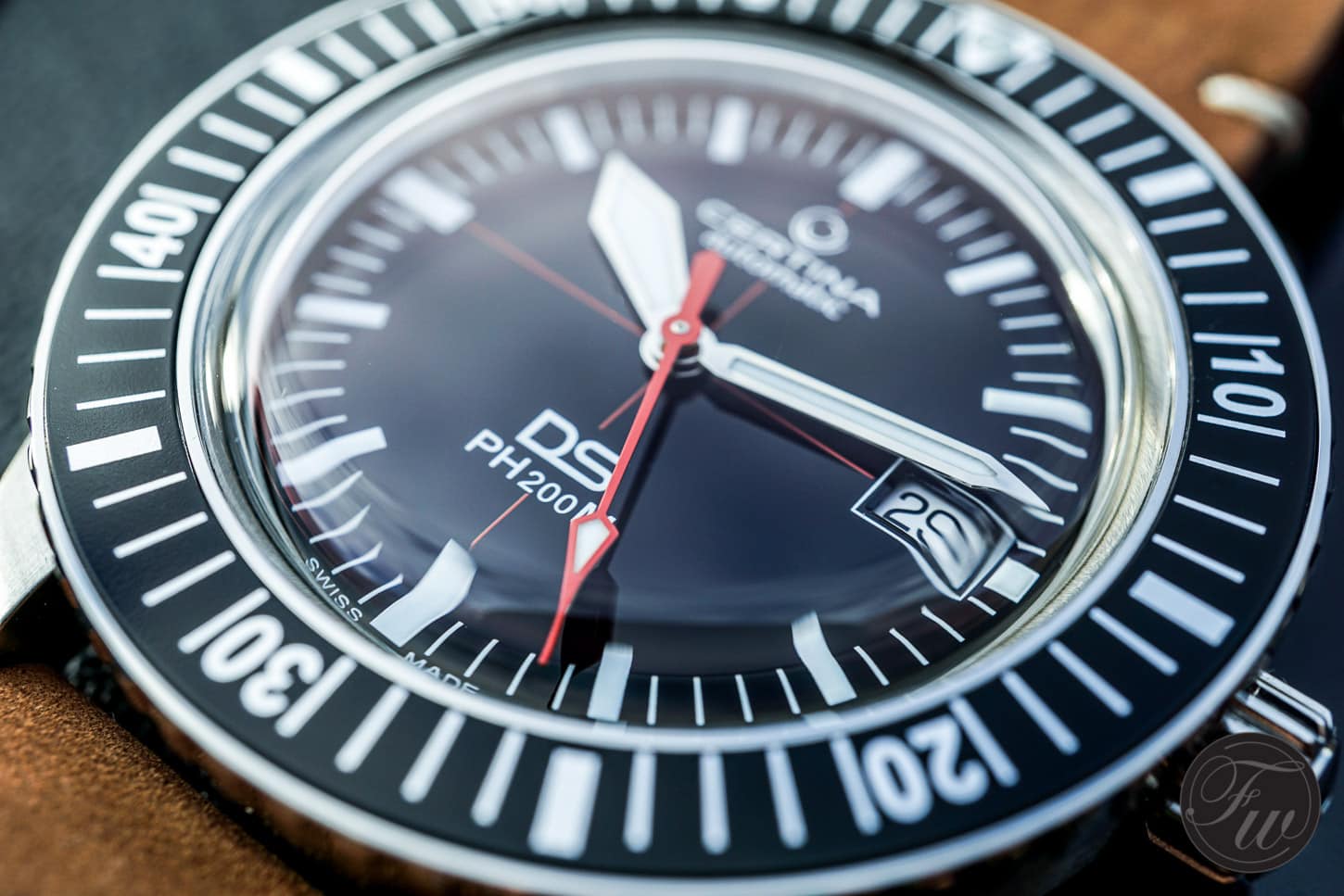 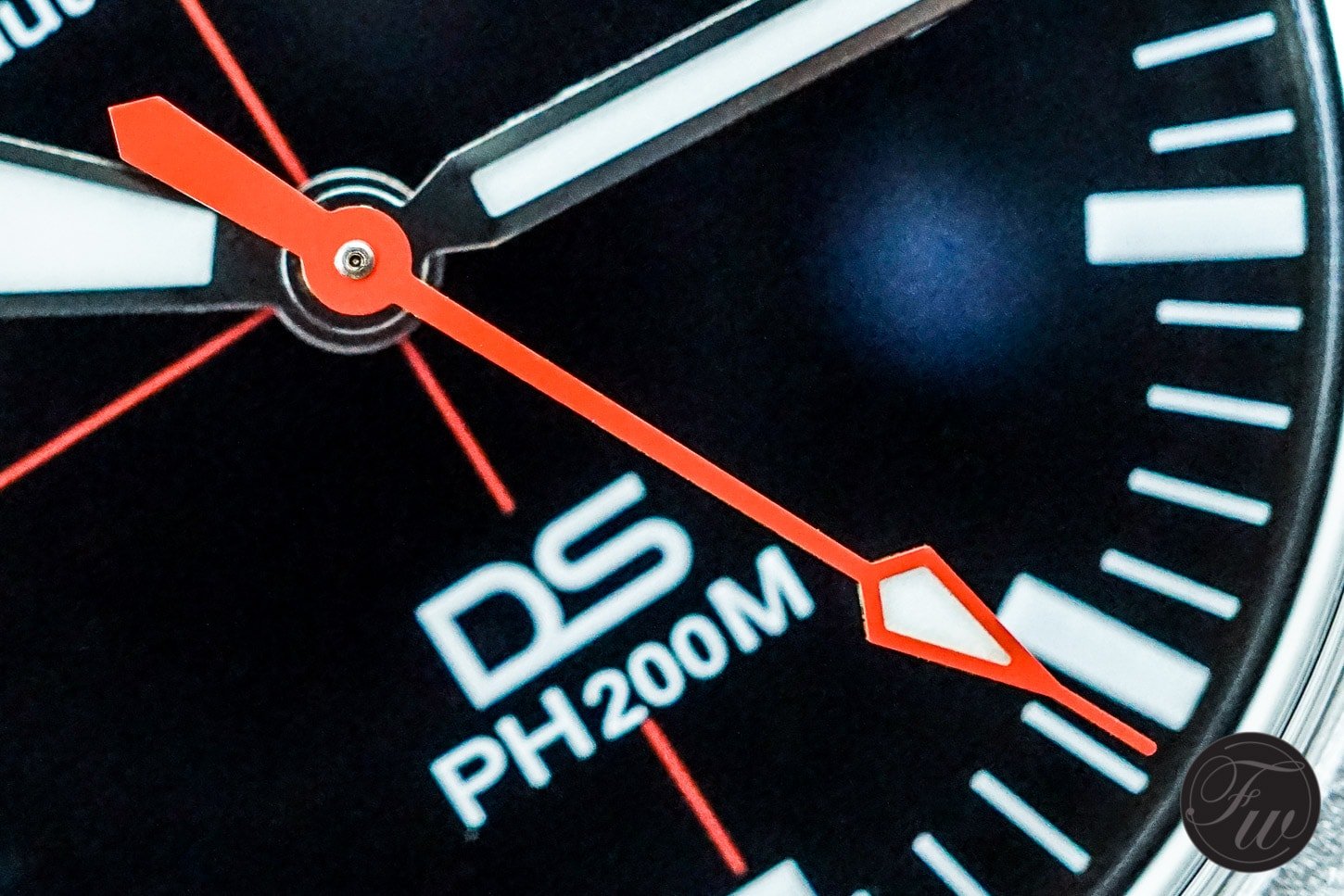 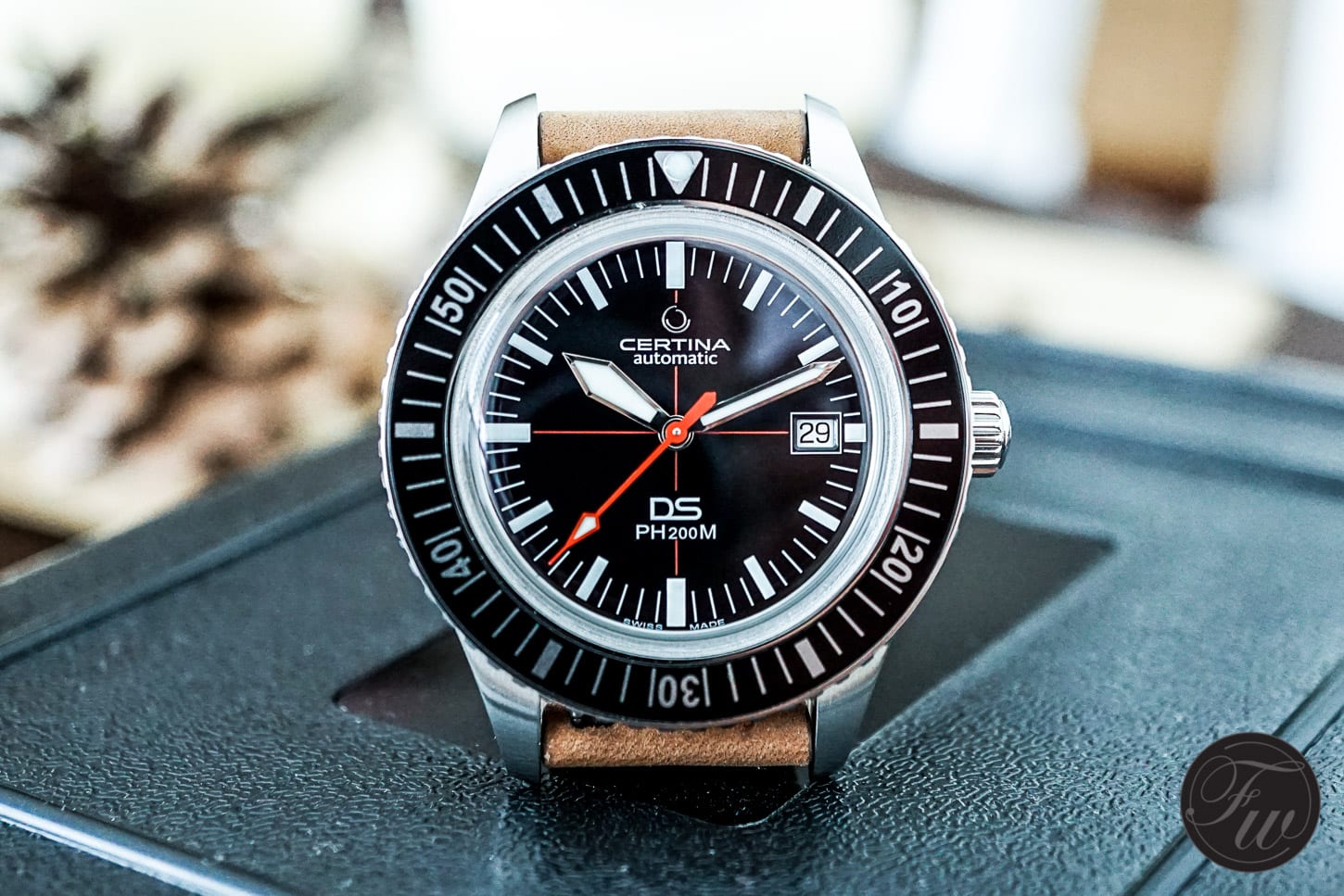 The “engine” inside the Certina DS PH200M is one that we already know from other Swatch Group models. It is the ETA Powermatic 80 (.111). This is the base caliber one could find in the Tissot Ballade for instance (with some improved features). It is a very well-made automatic movement with 80 hours of power reserve. Yes, the DS PH200M will run over 3 days once fully wound. A diver watch does not have many complications, the aim of the movement inside is to be reliable and accurate. The Powermatic 80 is such a caliber. Together with the DS system, this forms such a unity that it makes the PH200M an excellent timepiece. Both in design and technicality. 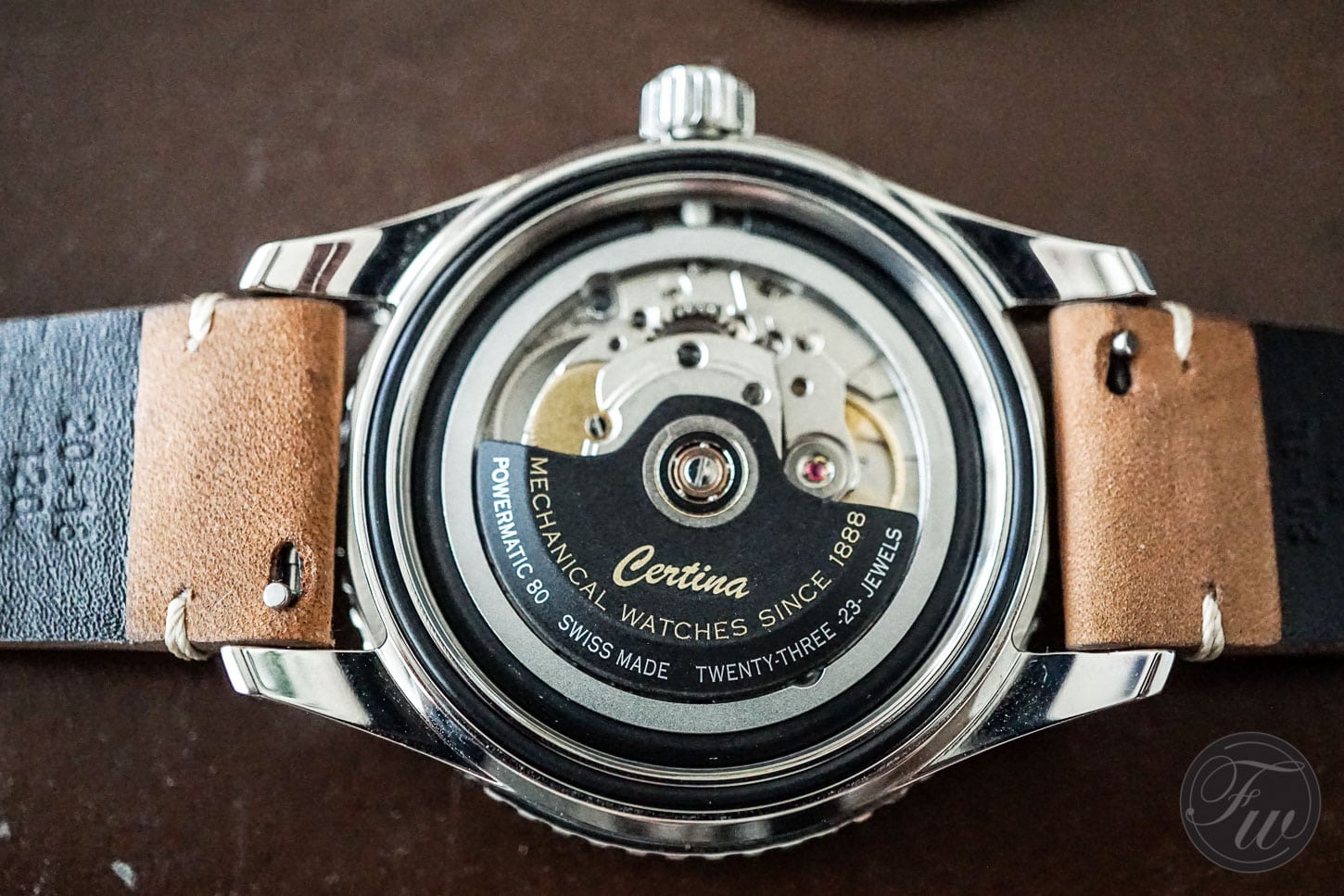 Where re-editions often fail, at least for me, is the “garnish” around the watch head. Although I have to say brands are paying more attention to these small details there is still a long way to go for many. Not for Certina. The packaging of the watch is just perfect. First of all, the DS PH200M comes on a beautiful caramel brown calf leather strap with painted sides! Very important for a dive watch even if the calf strap is not the one, you’d take swimming. For that, Certina also packs a black NATO with a dark grey line in the box. Speaking of which, the box is a large plastic case, similar to those heavy-duty Pelican Cases researcher use to keep their valuable equipment safe. While the leather strap has a polished buckle (again similar to the old hexagonal buckles tropic strap would have) the NATO buckle is brushed. 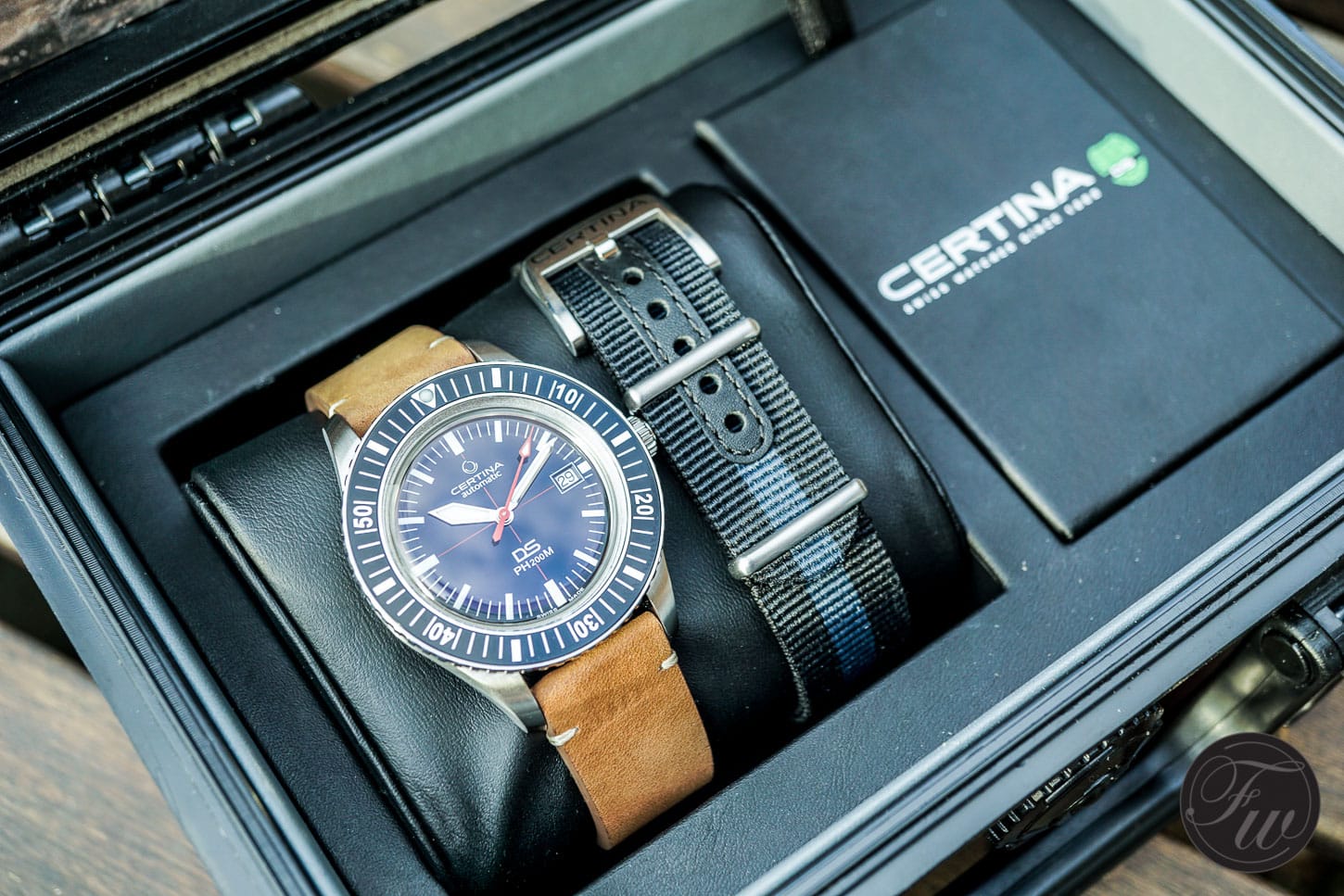 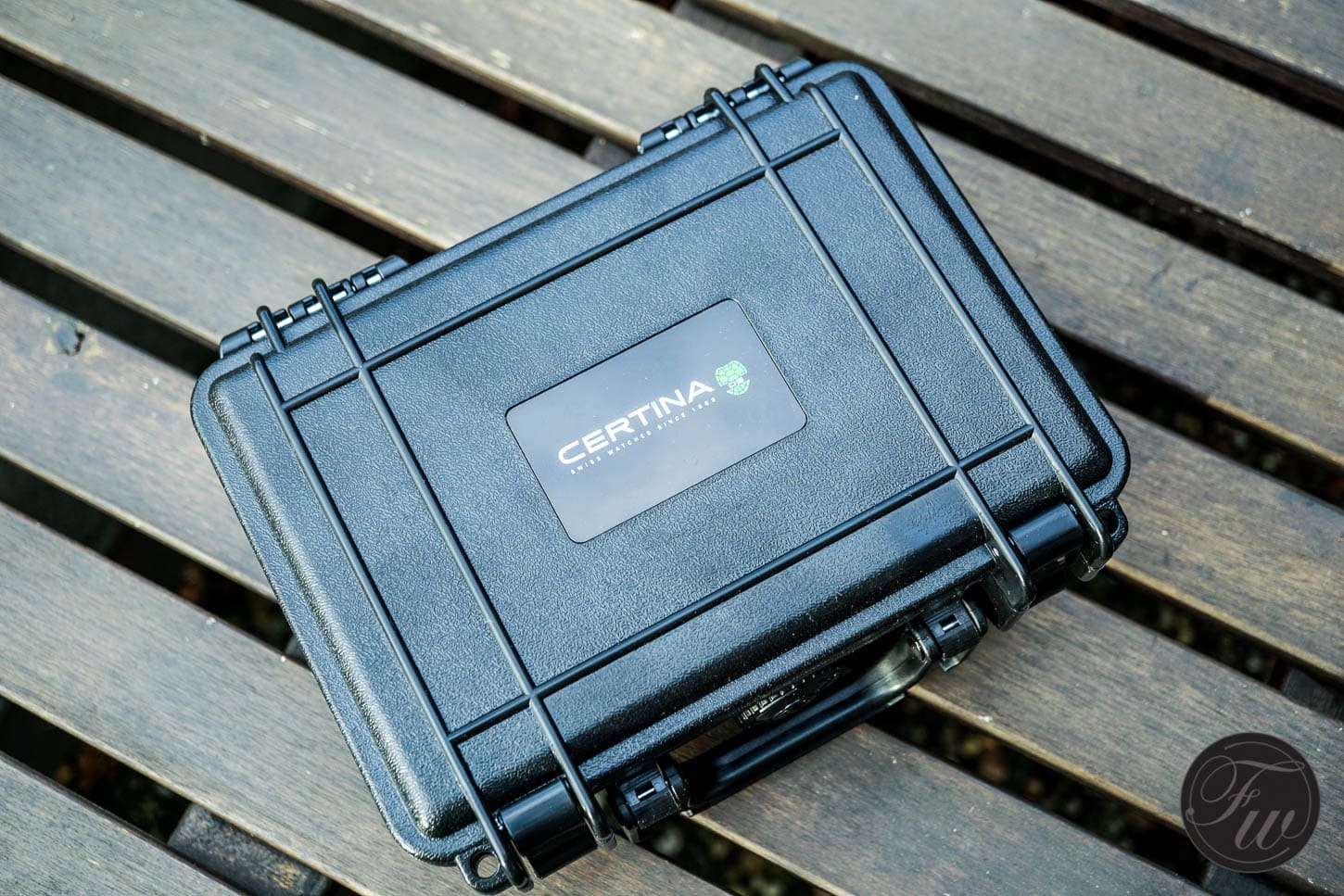 The word Certina is painted on the NATO buckle with black. It is only engraved into the leather strap’s buckle making it less visible. Other than the usual warranty booklet and card Certina packed a little card congratulating the new owner. Some might consider it a cheesy move, I think it is a nice little touch from the brand. It highlights the watch’s features and mentions the vintage model as the source of inspiration. The warranty on the DS PH200M is 2 years. The last bit is a small plastic tube container with 2 extra pins. See, the leather strap has quick-release spring bars. This makes strap changing super-fast but you cannot use said ins with the NATO strap. So Certina included 2 more for that purpose. 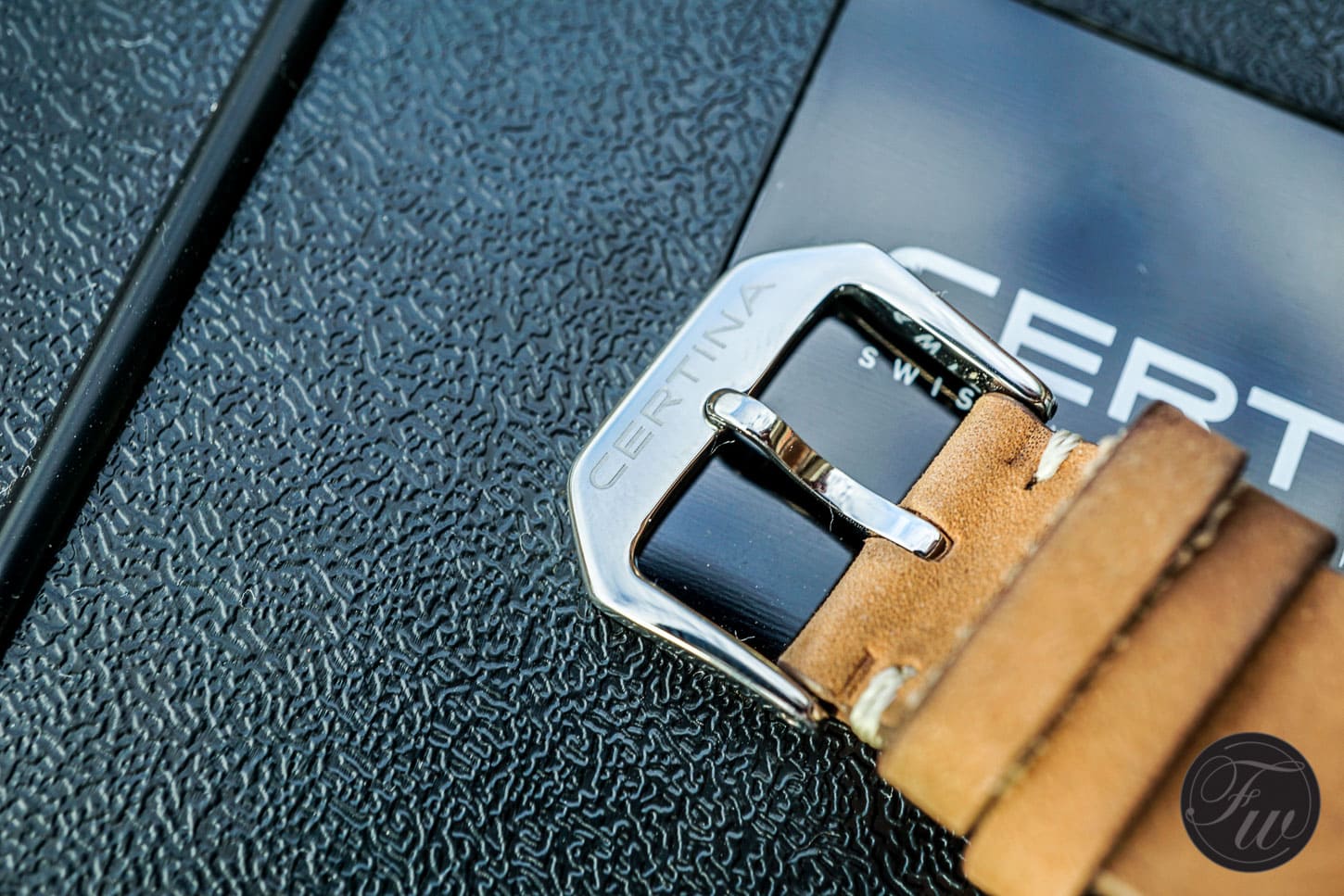 Since I saw this watch for the first time in Basel during the fair earlier this year I’ve been waiting for this watch to land on my table. Even though it took longer than I expected I finally got it and it was even better than I had remembered. This is a great timepiece and a fun watch to wear next summer with a t-shirt out-and-about or lounging the pool. If you want to test it the DS PH200M should withstand that as well. Now comes the best part; for all of this, you have to pay six hundred and ninety-five euros. Yes, not even €700. As far as I’m concerned for a Swiss made automatic dive watch with DS system, 80-hours power reserve, 2 straps and awesome vintage look it is not much at all. Especially, that the timepiece also has an established brand name, like Certina.

If you would like to visit Certina’s website, please click here. For those of you who love vintage Certinas, stay tuned. I have something cool coming soon.