After collecting and hunting down Speedmasters for many years now, I can say that my personal grail would be a Speedmaster CK2998-1. To me, it represents the Speedmaster in its best form. Black bezel, leaf hands, straight-lug case and caliber 321 movement. Unfortunately it took me some years to find out, and once I did, I also realized it had become very expensive.

If you put a Speedmaster CK2998 next to a modern Speedmaster Professional, there’s no doubt that these are related. Even for the layman. 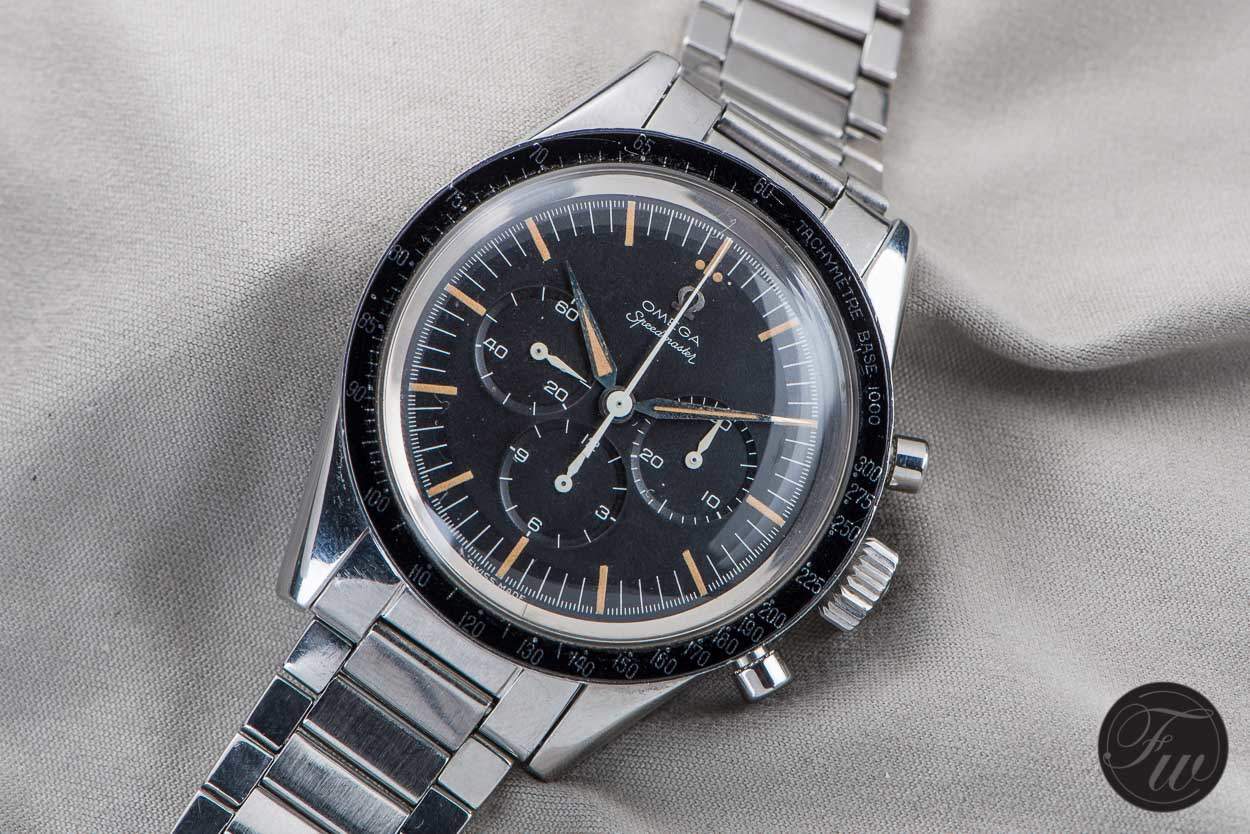 Devil is in the Details 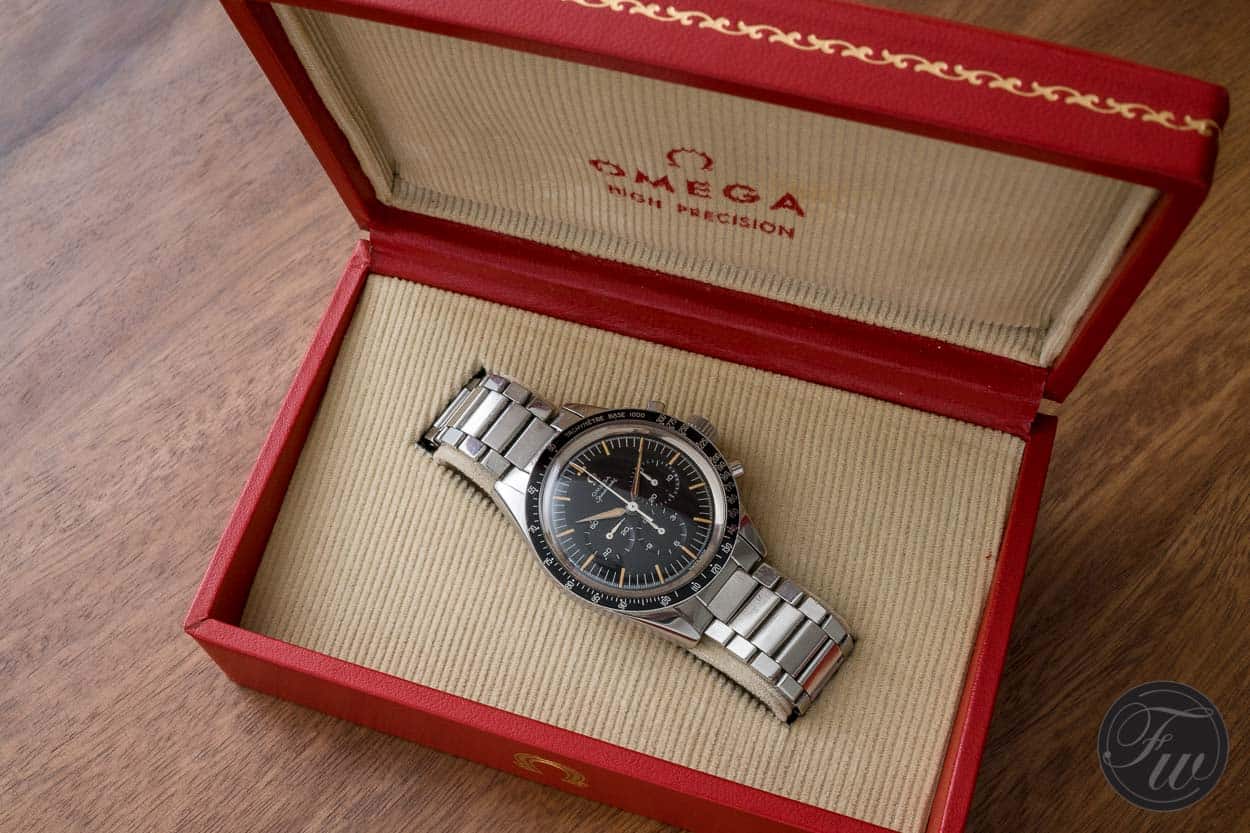 The Speedmaster CK2998-1 is the first reference of 8, and was introduced in the fall of 1959. As written above, it looks a lot like the last version of the CK2915. Or, better said, like one of the transitional CK2915 models, as this reference normally came with stainless steel bezel and broad arrow hands. This CK2998 reference also inspired last year’s limited edition Speedmaster CK2998, even though the latter one had some funky blue tones in there.

The CK2998 was also the first Omega in space, on the wrist of astronaut Wally Schirra. It was his own privately acquired watch and joined him on the Sigma 7 mission in 1962. In 2012, Omega introduced a tribute to the First Omega in Space with their Speedmaster reference 311.32.40.30.01.001 which is still in production today. Later on, Omega released this model in 18 carat Sedna gold as well as last year’s blue toned Speedmaster CK2998. 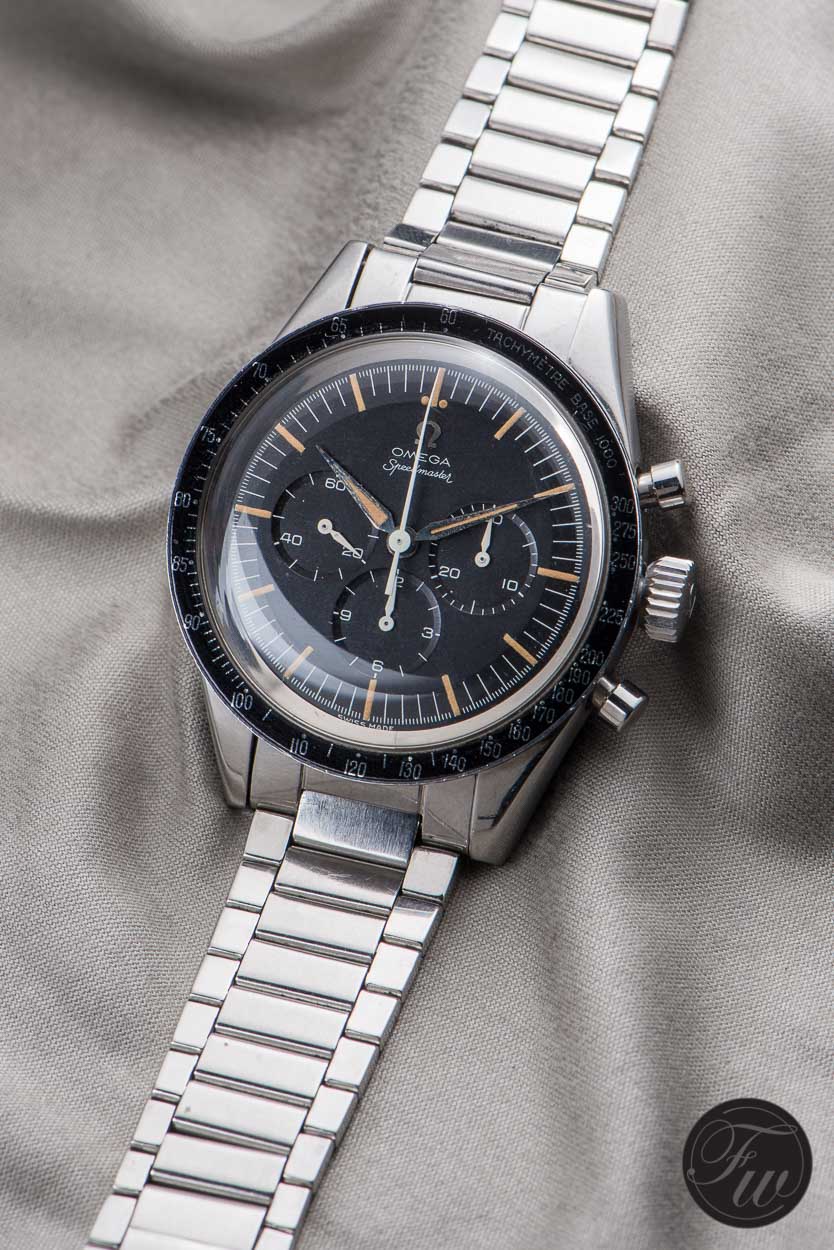 This Omega Speedmaster CK2998-1 has some interesting details, like the first generation black bezel with its ‘Base 1000’ scale and dial where OMEGA is written with an oval O. In the second iteration of the CK2998, the CK998-2, the O is round. The Base 1000 tachymeter bezel does appear on the CK2998-2 as well. The bracelet on this Omega Speedmaster CK2998-1 is the correct reference as well, 7077 with end-links marked ‘6’.

On this specific watch, you can see how well the tritium markers and hands have aged. A beautiful dark yellow-ish patina make it stand-out. 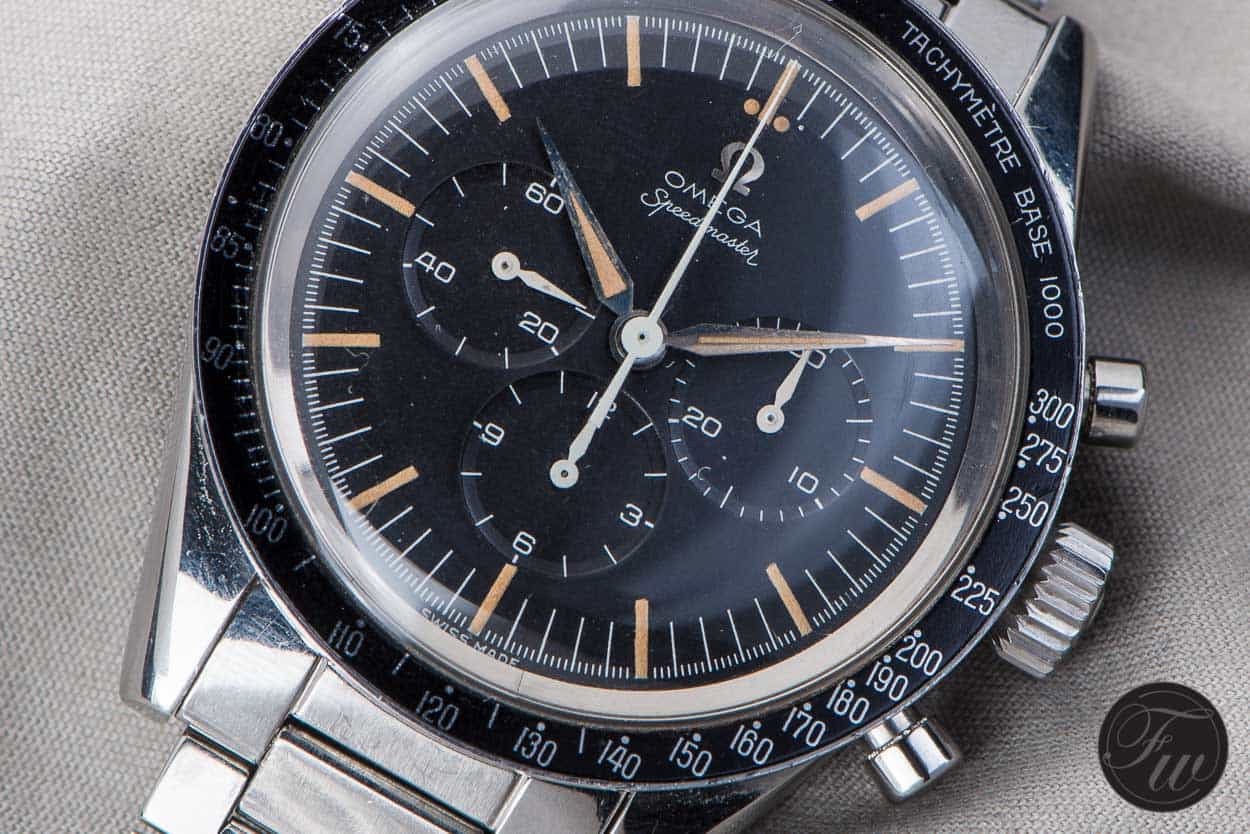 This was also the first caseback that has both a seahorse logo and ‘Speedmaster’ engraving right above the logo. Below the seahorse, there’s the Omega logo engraved. The earliest CK2915 casebacks only had ‘Speedmaster’ engraved on the bevel. Later CK2915 casebacks already had the seahorse logo, but the Speedmaster engraving  was still on the bevel. With this double bevel caseback you see here, the engravings all have been centered. 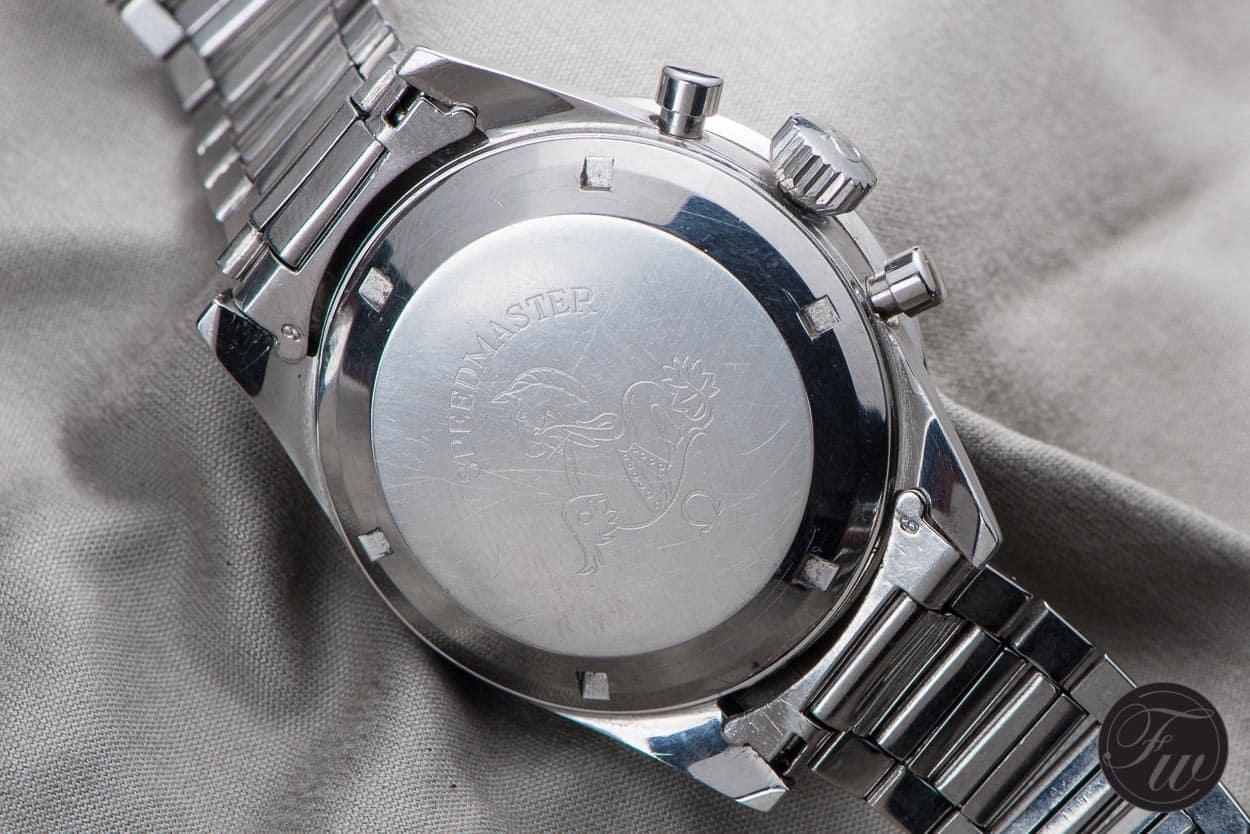 Assuming you are a Speedmaster enthusiast, you must have noticed that it has become more difficult to find a great pre-Moon vintage Speedmaster these days. Even the most common pre-Moon Speedmaster Professional models, the 145.012 and 105.012 are becoming rare and expensive. The earlier references, with straight-lug cases, are simply hard to find. In good condition that is, as there are still pieces offered on today’s market with over polished lugs and the wrong (replacement) parts. Even when the replacement parts are genuine Omega parts, the impact on parts that are not time-correct is huge on its collectibility and thus market value of the watch.

An unpolished Omega Speedmaster CK2998-1, with box, is like discovering a treasure. Unfortunately, it comes at a certain price of course. It wasn’t too long ago (but still over a decade or so), that you could find a nice Speedmaster CK2998 around or even below 10.000 Euro. The market has changed and the Speedmaster finally seems to get its credits in the collector’s world. The downside of this recognition is that the prices have gone up rapidly. Still, I believe there is little to no hot air in these prices, as you are buying a watch from a big brand that is still capable of servicing a watch like this, and where history is either known or can be retrieved from its archives. Compared to some other vintage watches, this is quite an advantage and the price is still considered to be fair for a column-wheel chronograph watch with this much heritage. 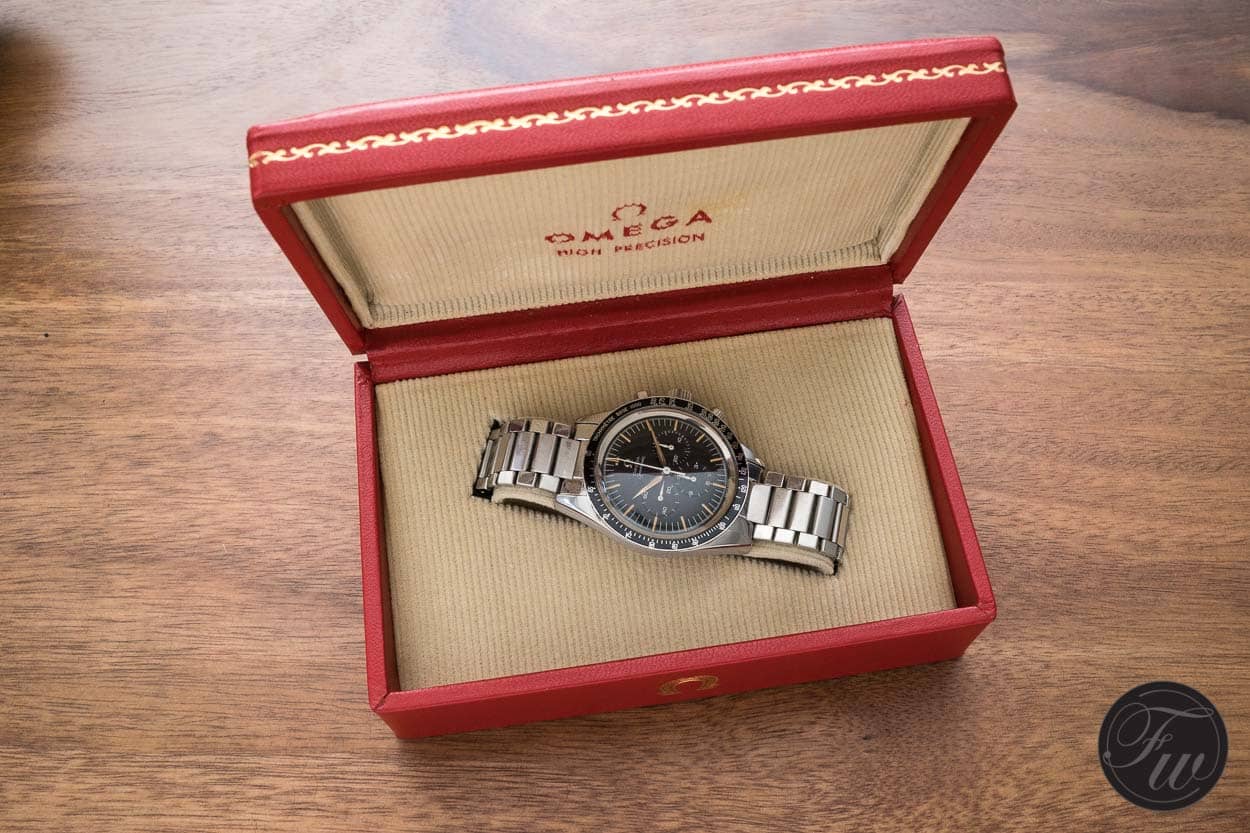 An interesting reference is the successor of the Speedmaster CK2998(-62), the 105.002. In 1962, Omega decided to change their reference number coding system for all of their watches (Seamaster and Constellation series as well). In fact, the coding system is the only thing that sets the 105.002 apart from the CK2998. As written earlier, some of the CK2998 references were actually produced (assembled is a better word) after the introduction of the 105.002. This has mainly to do with stock of parts, like the caseback that was already stamped CK2998.

A big thank you to Roy & Sacha Davidoff who enabled us to take pictures of this Omega Speedmaster CK2998-1 with its original Omega ‘High Precision’ box. This watch was – or still might be – in their collection of Speedmaster watches.

Hot Topics
RJ’s Top Five Alternatives To The Omega Speedmaster Professional
96 comments
We Need Luxury Solar-Powered Quartz Watches From Rolex, Omega, Breitling, And Grand Seiko
70 comments
The Omega Speedmaster On The Big Screen — Watch Spotting At The Movies
69 comments
Above And Beyond: When And Why Paying Over Retail For A Watch Makes Sense
63 comments
The King Seiko Collection Debuts With Incredibly Wearable Watches
45 comments
Popular
Grand Seiko SBGA211 ‘Snowflake’ And Why I Didn’t Buy It
Robert-Jan Broer
20
Why Are There No Stainless Steel Rolex Watches Available?
Robert-Jan Broer
116
#TBT Seiko 7549 Golden Tuna – In Love With a Quartz Diver
Michael Stockton
7