The Five Omega Speedmaster Watches I Missed Out On

There are some Omega Speedmaster watches that I missed out on in the past. As a Speedmaster enthusiast and collector, that sometimes hurt. But you can’t have it all, I guess.

In this article, I will share with you the five Speedmaster watches that I missed. Either during its introduction or just because I only realized later on that I “need” it. Of course, you can still add it later on, and in some cases I did.

Five Speedmaster Watches I Missed Out On

This overview is about the watches that I missed from the start, so not those Speedmasters that were introduced before I got into collecting them. Otherwise, the list would be very long. Very long. A borderline pick would be the 2003 Speedmaster Snoopy Award. I was already into watches back then, but being a student I didn’t have the means to spend €3,500 on a watch at the time. I made up for it 10 years later, when I purchased it in NOS condition from a dealer in NYC. 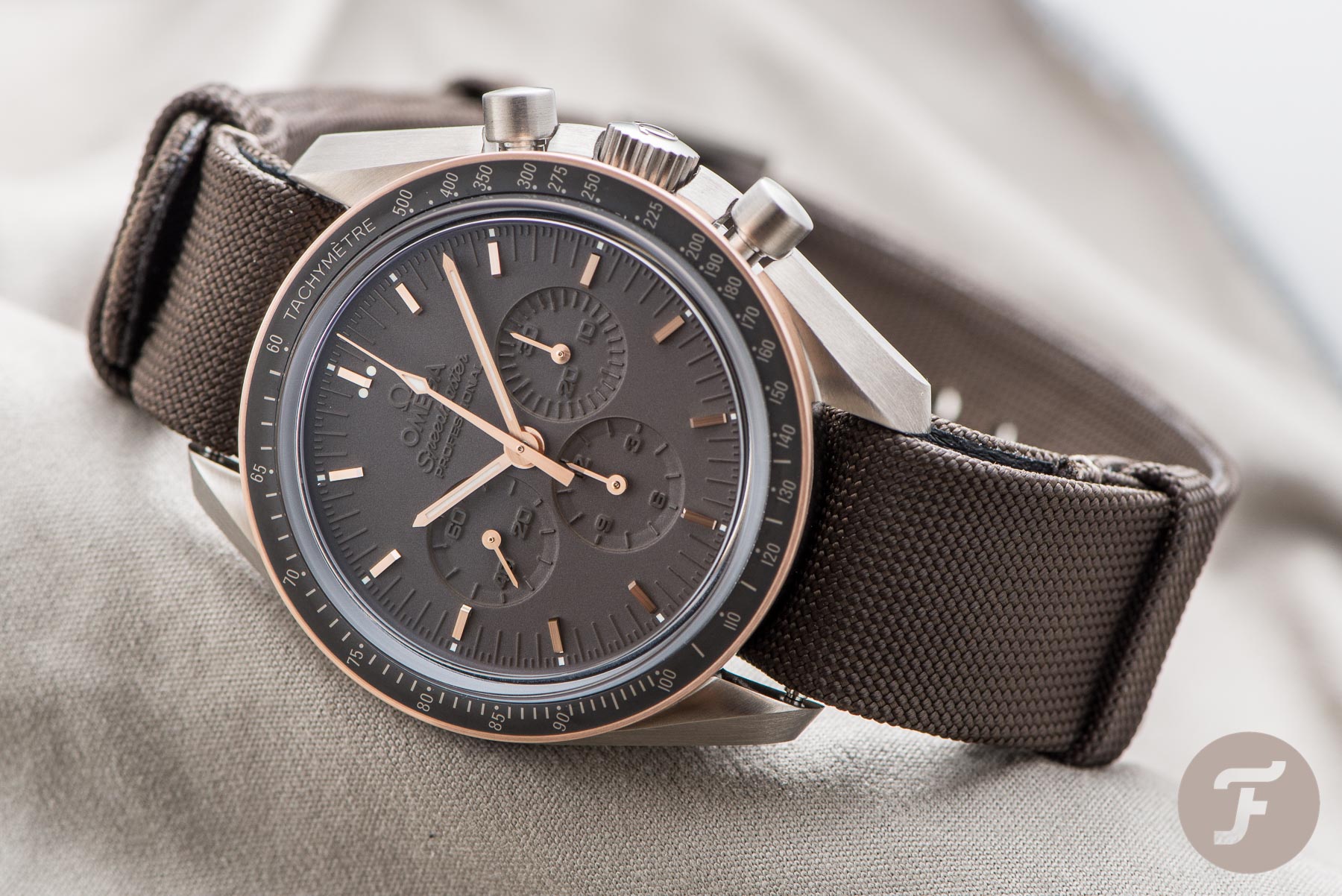 I can vividly remember the Speedmaster Apollo XI 45th anniversary (we covered it here) being introduced during Baselworld 2014. It got me very excited, but unfortunately, I didn’t manage to get one. Only a few pieces were allocated to The Netherlands, and none of them ended up on my wrist. This model, with its titanium case and Sedna gold bezel, is so different from the regular Speedmaster Professional models, that I was very eager to have it in my collection. The Speedmaster Apollo XI 45th anniversary (reference 311.62.42.30.06.001) is limited to 1,969 pieces only. What I found particularly interesting is the laser-etched dial with Sedna gold applied numerals. 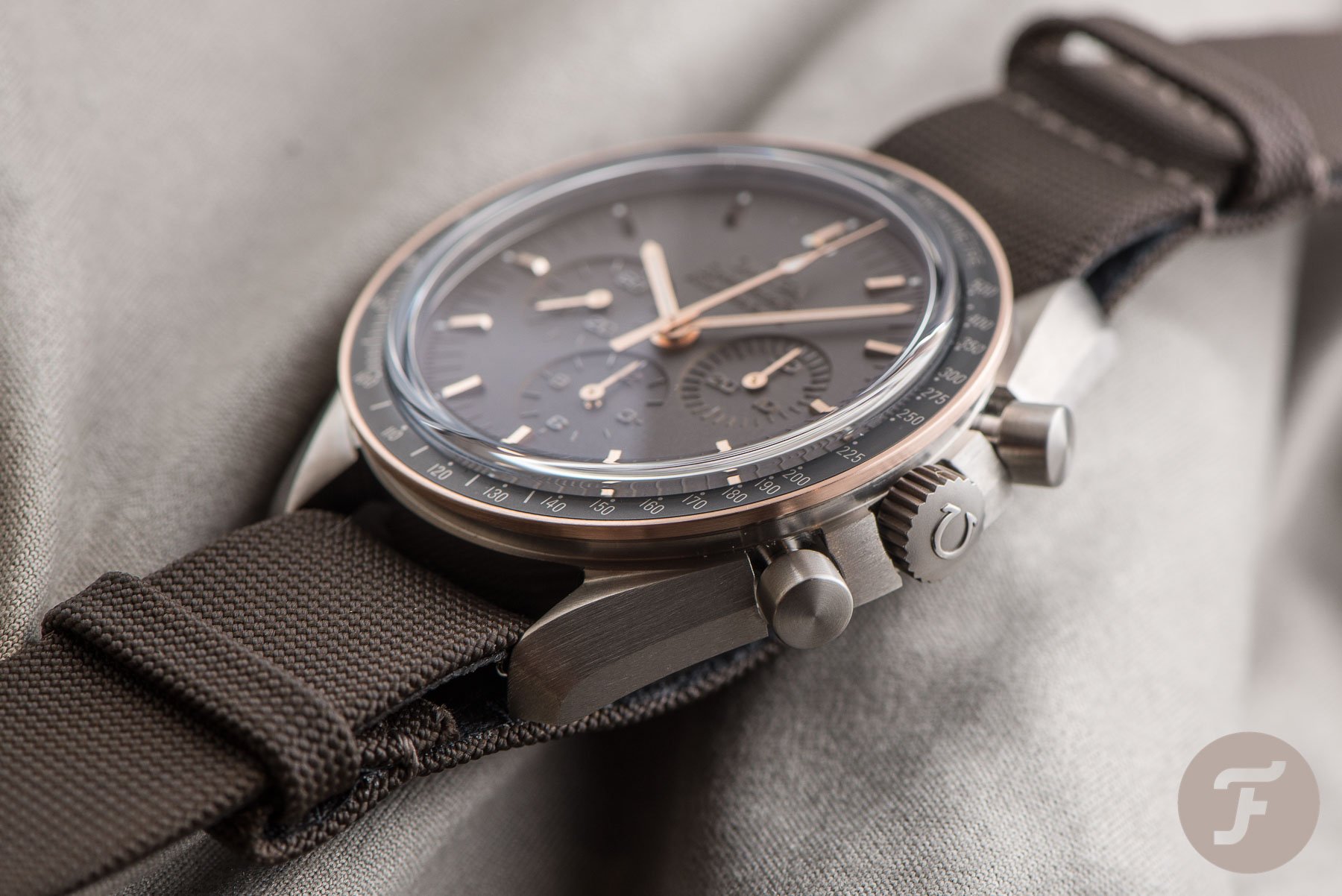 Despite the use of Sedna gold, this Speedmaster Apollo XI still has a tool watch look & feel to it. It came on this brown NATO strap, but you can also fit the titanium Speedmaster bracelet from the X-33. The retail price of this watch was around the €6,000 mark and nowadays, they go for well over €10,000. 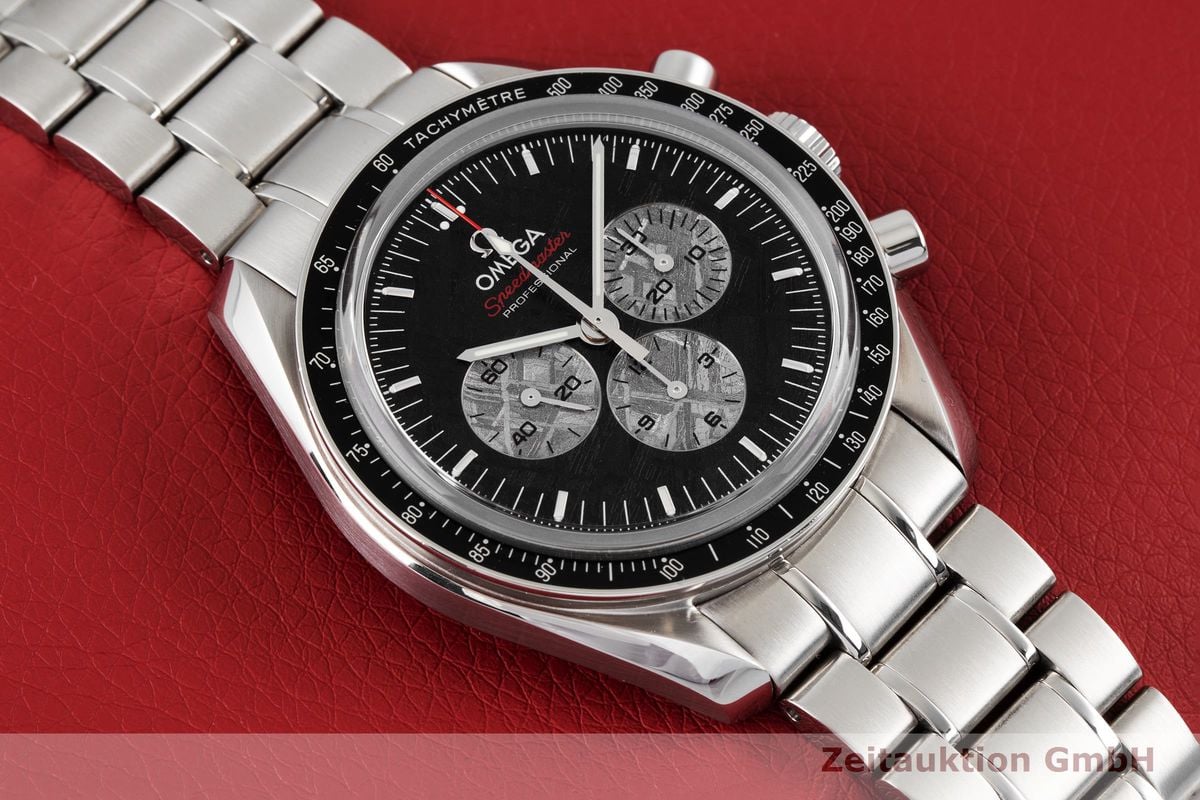 Up to today, this is one of the best looking Speedmaster watches in my opinion. And I had the chance to buy it pre-owned a long time ago, but thought “it will come at some point”. And that point never came. The Speedmaster prices went up and it became a bit out of reach. Or at least out of my comfort zone, you could say. This Apollo-Soyuz 35th-anniversary reference 311.30.42.30.99.001 was never cheap to start with, as it was €3,000 more than the regular Moonwatch at the time. Limited to 1,975 pieces only, referring to the year of the Apollo-Soyuz mission with (a.o.) cosmonaut Leonov and astronaut Stafford on board. The dial is made of meteorite, making it super special. Every pattern is unique. 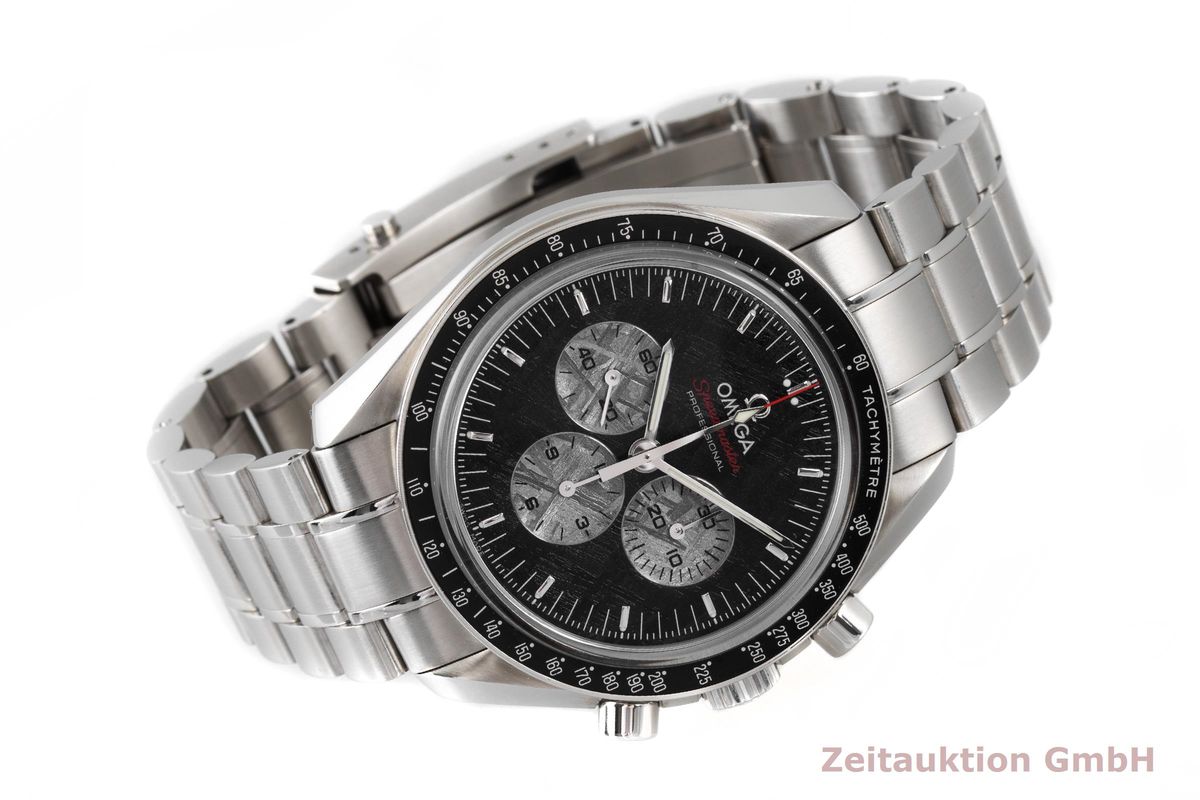 Omega repeated a similar dial design for the caliber 321 model in platinum in 2019. If I am not mistaken, the retail price of this Apollo-Soyuz was about €6,900 at the time (2010). Today it seems to be around €10,000 in the pre-owned market. Besides the box, dial and case back, it has all the specifications and features similar to the regular Moonwatch of that time. It is a very cool watch, and I noticed that some of the Apollo astronauts are wearing this watch all the time during events where they show up. 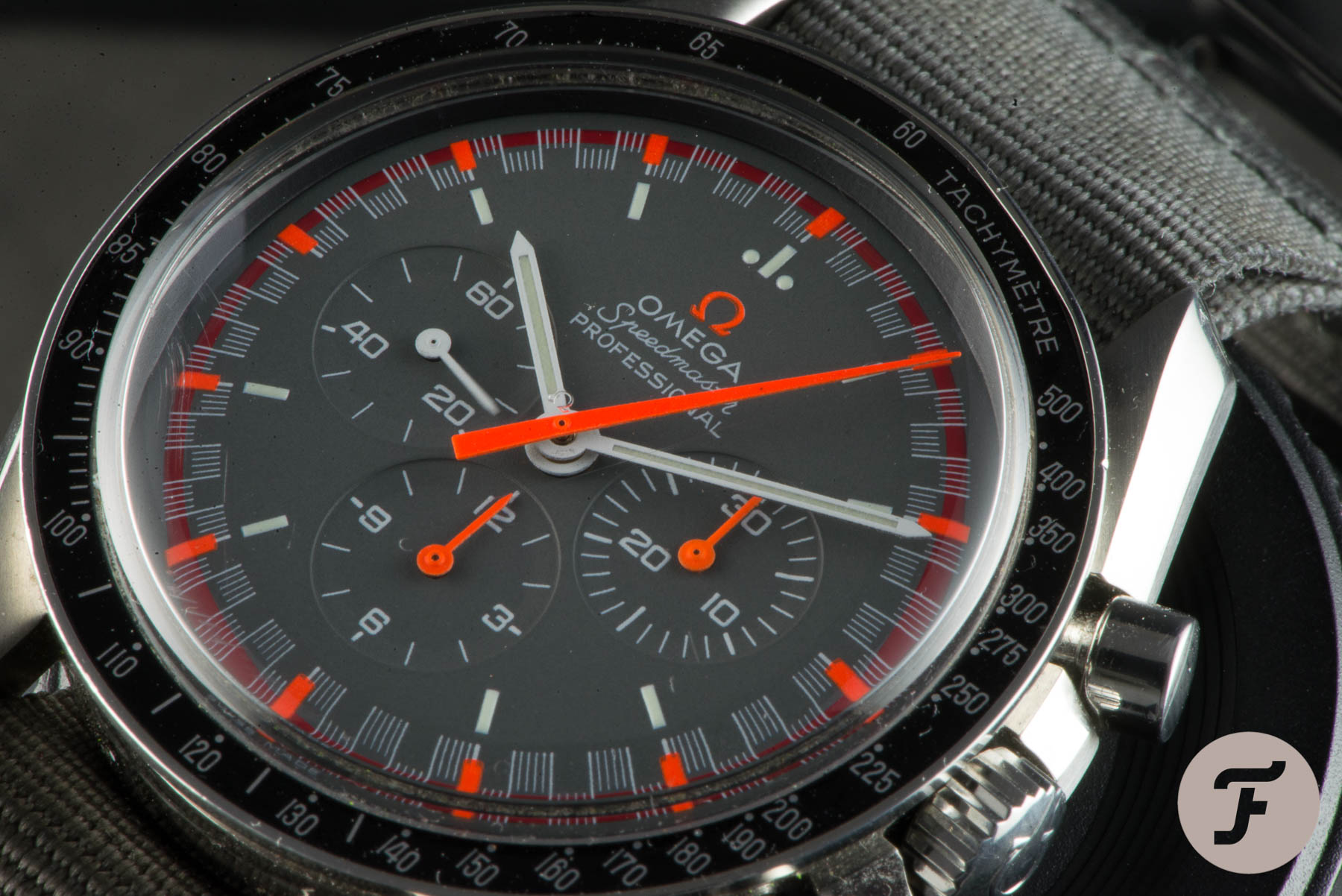 One of the best Speedmaster variations in my opinion is the 2004 Racing model exclusive to the Japanese market. The dial or design isn’t particularly new, as Omega already had it in the 1960s. It is interesting that even up to 2018, Omega made watches specifically for certain markets. Japan has been a proper watch market for many decades, so it does make some kind of sense, but with the transparency of today (and the internet), the argument for region-specific models is starting to stale a bit. The last examples of this practice were the Speedmaster Tokyo 2020 editions, created especially for the Japanese market. It is interesting that this exclusivity possibly makes non-Japanese people want them even more. Anyway, the 2004 Racing Japan Special was normally priced for a while, and at some point, it just went berserk. 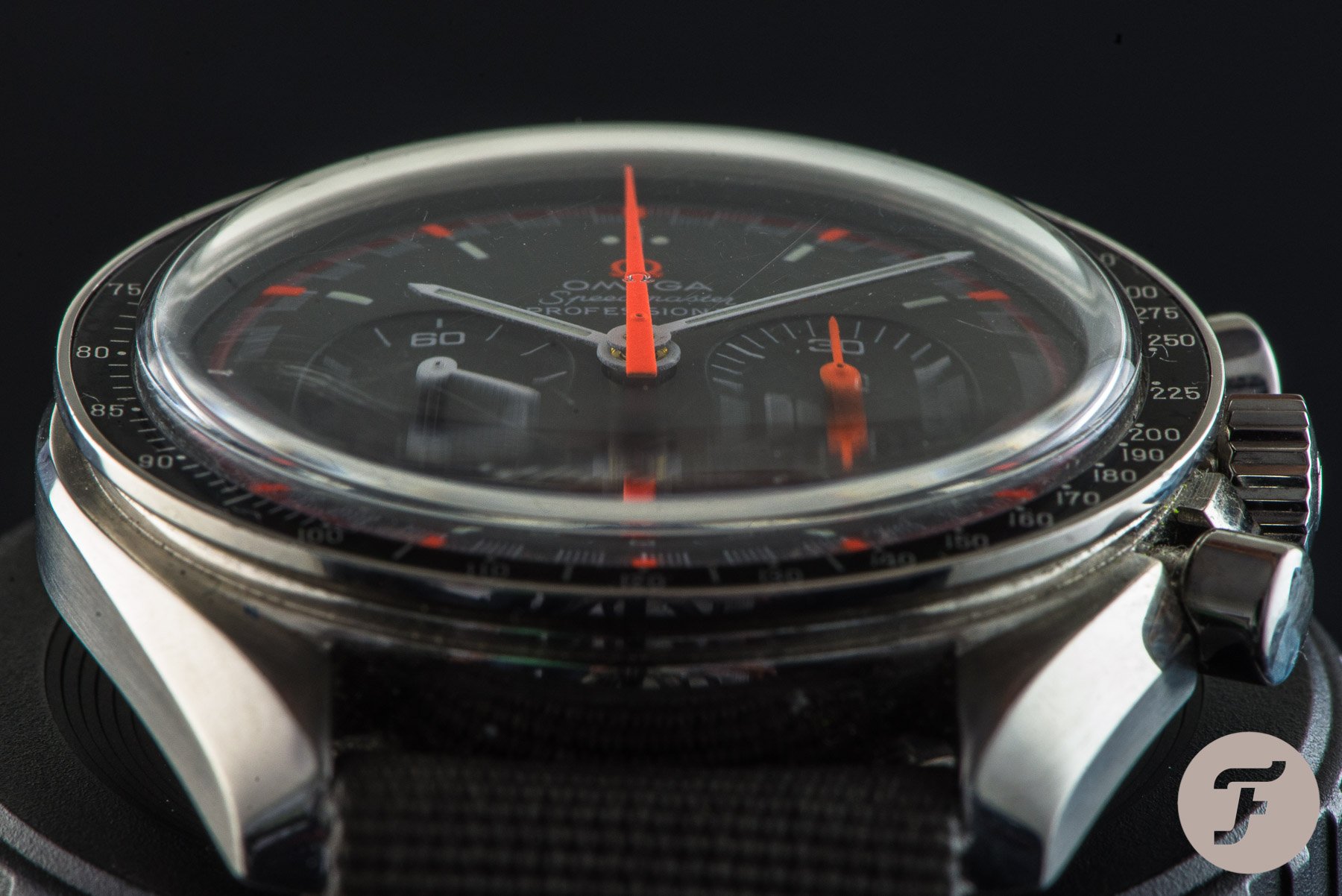 I should have got one when I had the chance and these moved for slightly above retail (I remember them being offered for around €3,500). The Speedmaster 3570.40 was identical to the 3570.50 (normal Speedmaster Professional), with the exception of the dial. I bought a separate dial and set of hands, and had a 3570.50 converted to a “Racing”. But it doesn’t feel the same. Now that the prices have gone over €11,000 on the pre-owned market, I have disconnected a bit. 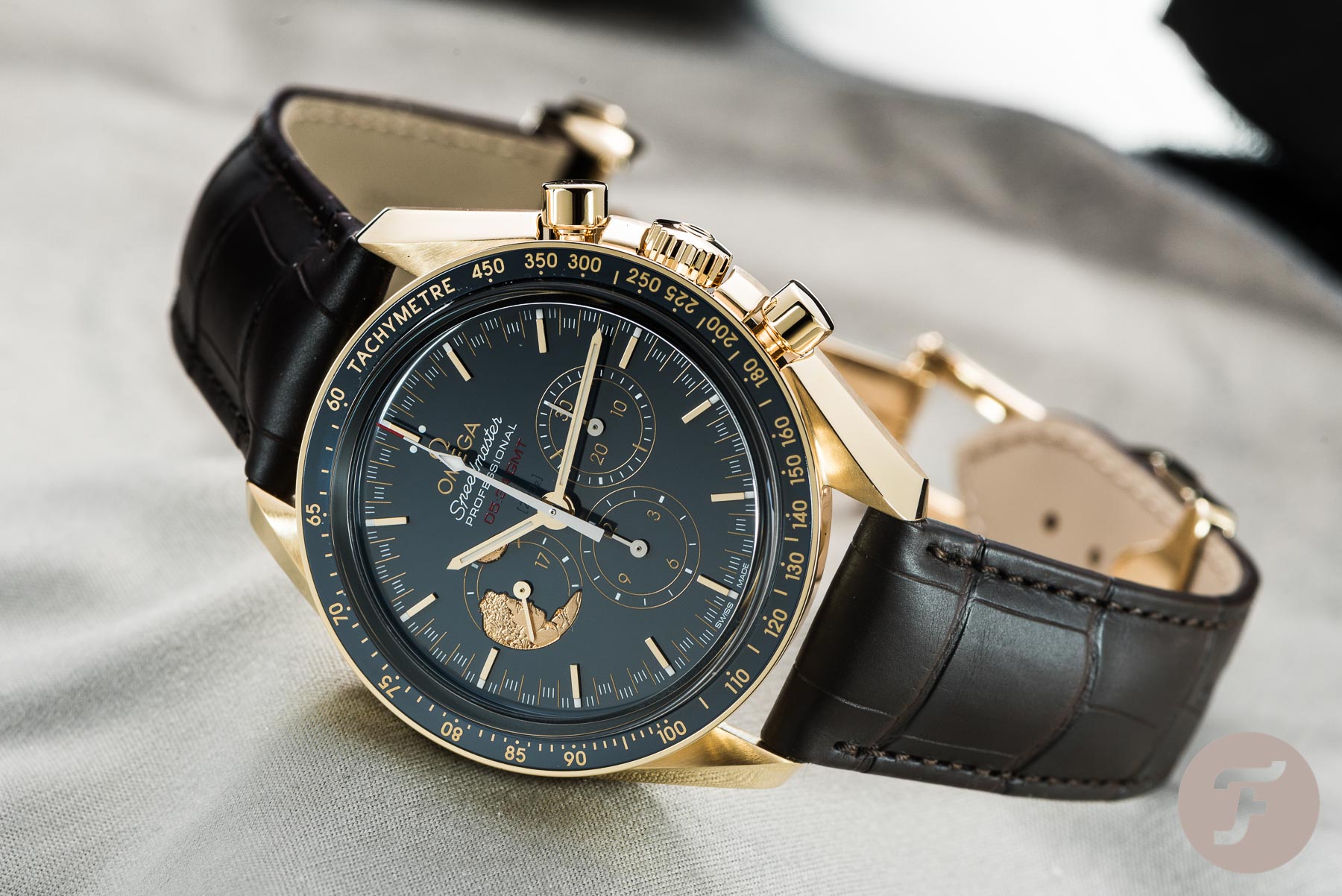 In 2017, when Gene Cernan passed away, Omega introduced the Apollo 17 “Last Man on the Moon” tribute to him. In steel (reference 311.30.42.30.03.001) and in gold (311.63.42.30.03.001). At that time, I already had a vintage gold Speedmaster Professional but also felt I should have a modern gold Speedmaster. I wrote an article on Gene Cernan for Omega’s Lifetime magazine, and when doing a bit of research about him, I stumbled upon something he did before he left the Moon.

Just before astronaut Eugene Cernan steps up the ladder of the lunar model to leave the Moon, at 5:34 GMT on December 14th, 1972, he does something that made almost every daughter in the world jealous. He knees down and scribbles the initials of Tracy, his daughter, in the Moon dust. Her initials are still there and probably will be there for the next millions of years. I love these kinds of things. It has little to do with this watch, but it is connected to Gene Cernan in the end. 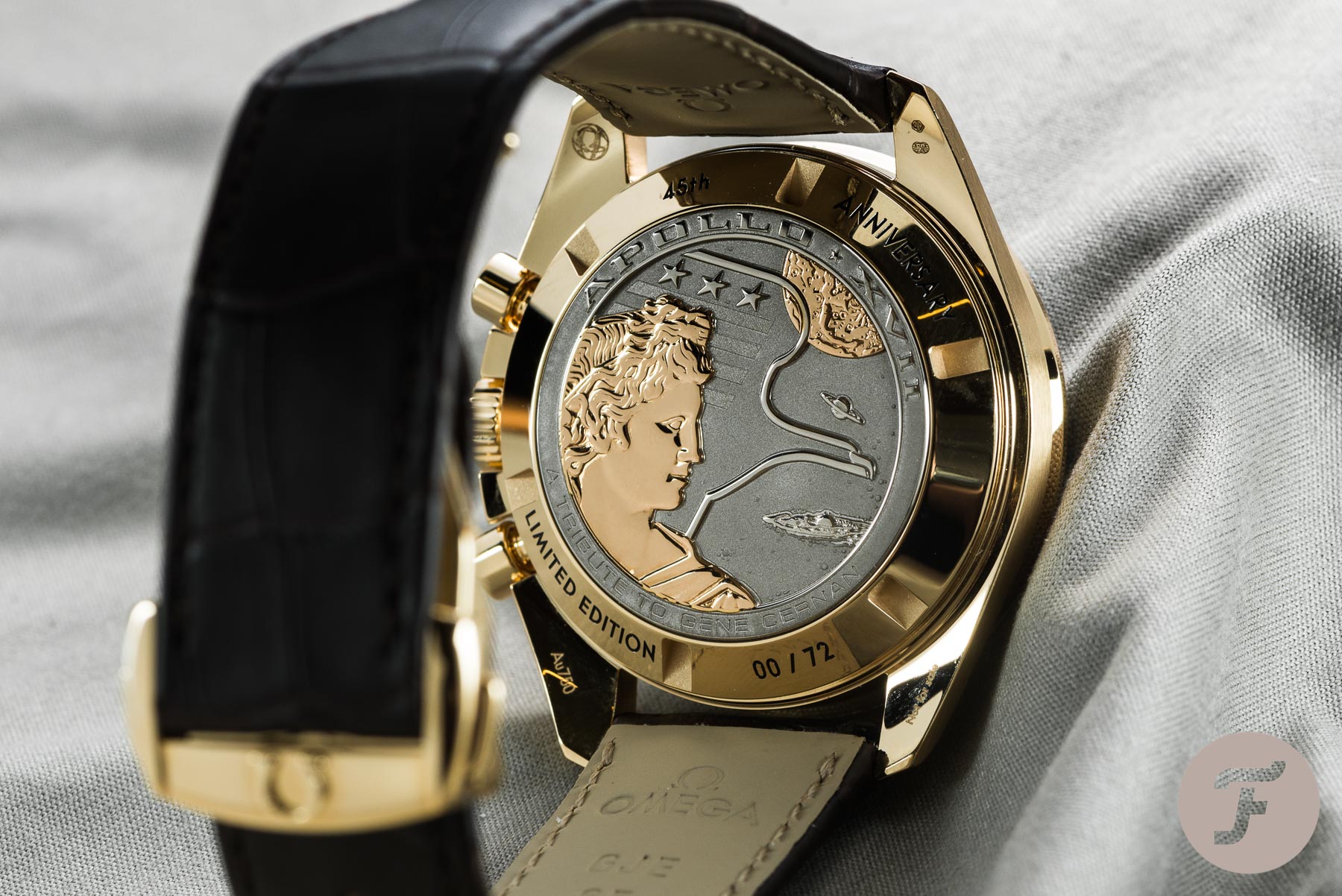 And I wasn’t the only one. At first, Omega wanted to do just 72 of these gold watches. But the demand was much bigger, so in the end, the brand cranked it up to 272 pieces. I missed out on it, but I am actually glad I didn’t go after one. Why? Because two years later in 2019, Omega introduced their Speedmaster Apollo XI in 18ct Moonshine gold, which I couldn’t have purchased if I had already spent that kind of money on the Apollo 17. 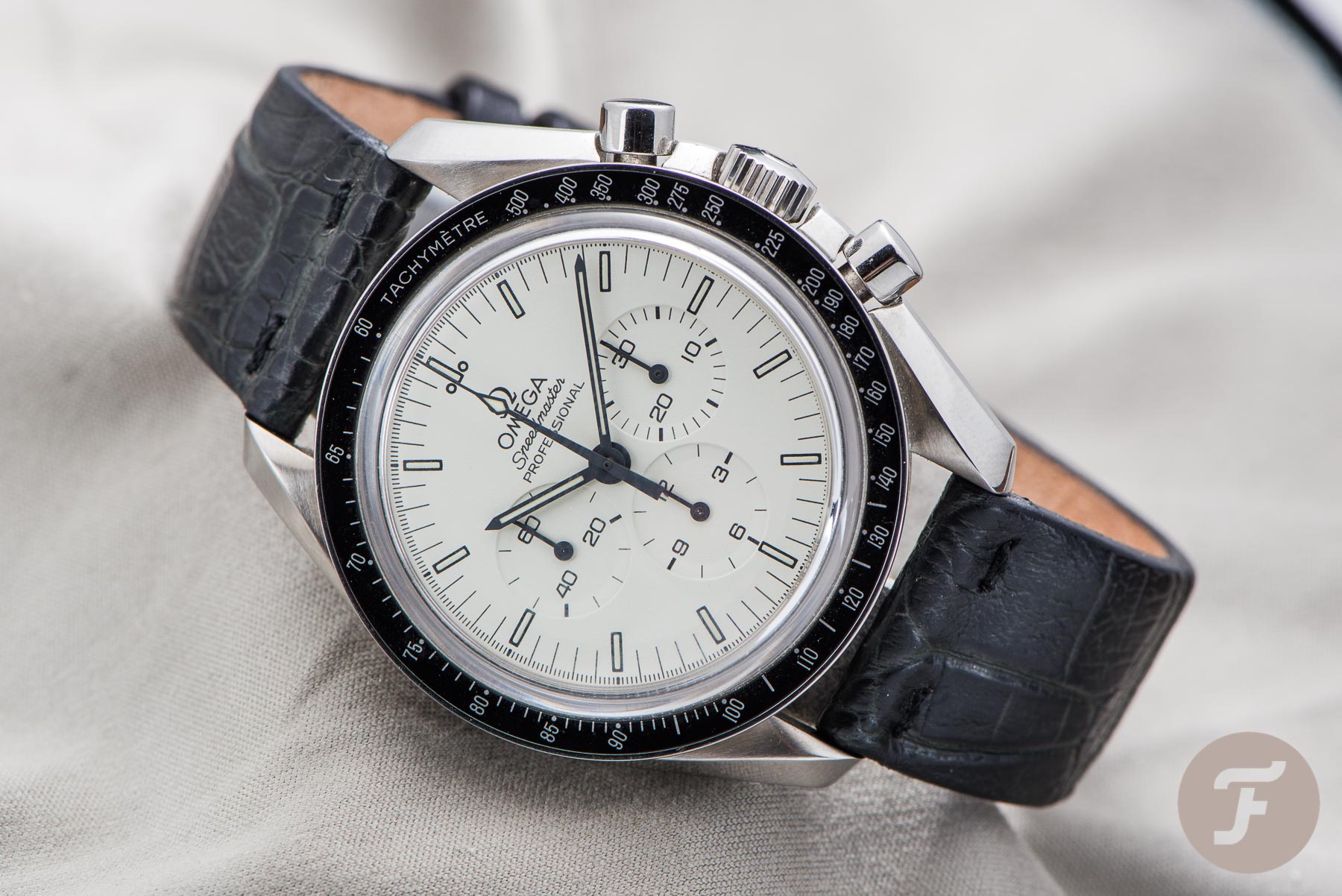 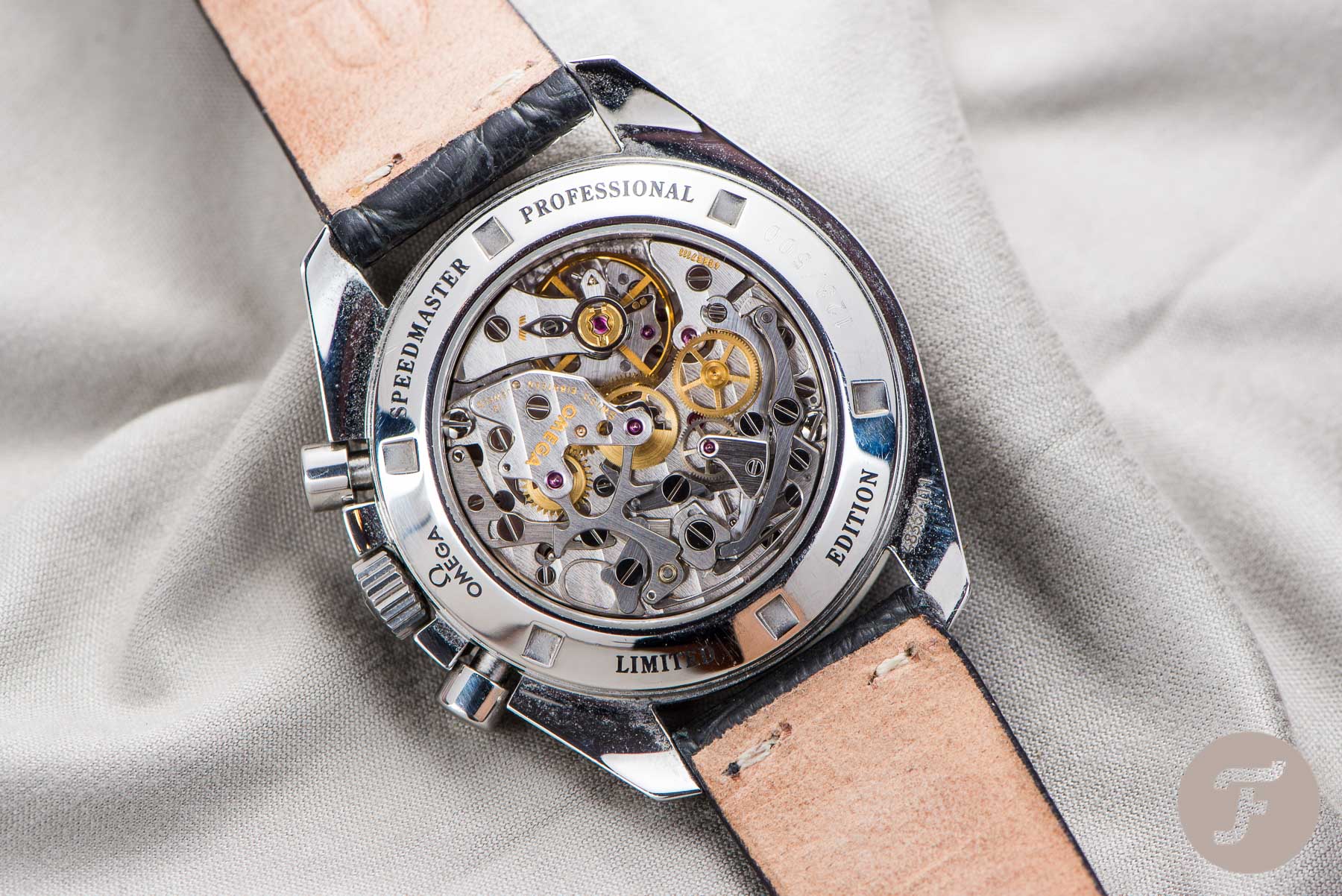 The cream-colored Speedmaster “Albino” is limited to 500 pieces and has a transparent case back. Inside, you will find the caliber 1863 movement. This is the nicely decorated version of the famous caliber 1861 movement, of course. Available with a bracelet and with a strap, and delivered in a black leather box. White dial Speedmasters are something special. Whether it is the Albino, Alaska 2008 or Silver Snoopy Award 2015 model, it gets a lot of appreciation from collectors.

I have learned my lesson after the Apollo XI 45th Anniversary edition. The Apollo XI 45th is a watch I was really after and waited for months for the call that never came. I even let a few slide that were offered to me with just a little premium, as I was waiting for the “official” call. From all of the above, that Apollo XI 45th is one that I feel most bad about. I still hope to come across one at some point. During a nice holiday, at a dealer, in some drawer with watches he forgot about, with the original price tag on it. Let’s see.