It is obvious that whenever we need to research about our watch – or anything else for that matter- we reach for our smartphone, tablet or laptop. If you are one of these guys and only use a book as a doorstop or level the table leg please stop reading now!

If you are still here it means you love and use books often. It is true that nowadays most information you find in books is available on the Internet…all you need to do is find it. The problem with searching online is that most of the data needs to be collected form many places. We, vintage lovers, tend to rely on the good old way of doing research when it comes to an interesting piece and that is; picking a book from the shelf. Now it is known that if you are a Speedmaster fan the only book to consider buying, as far as I’m concerned, in terms of knowledge and information at the moment is the Moonwatch Only book. Same with Rolex, die-hard fans consider the Mondani books the Bible, and for a good reason. As you can see every, or at least almost every, major brand has its reference book. Then there are the watch groups; the divers, the chronographs, and in our case, the military watches. These watches form a major collector base within the community, watches connected to certain countries (like of the ones supplied to the British military) or brands (Omega, Rolex or Lemania issued pieces to name a few). 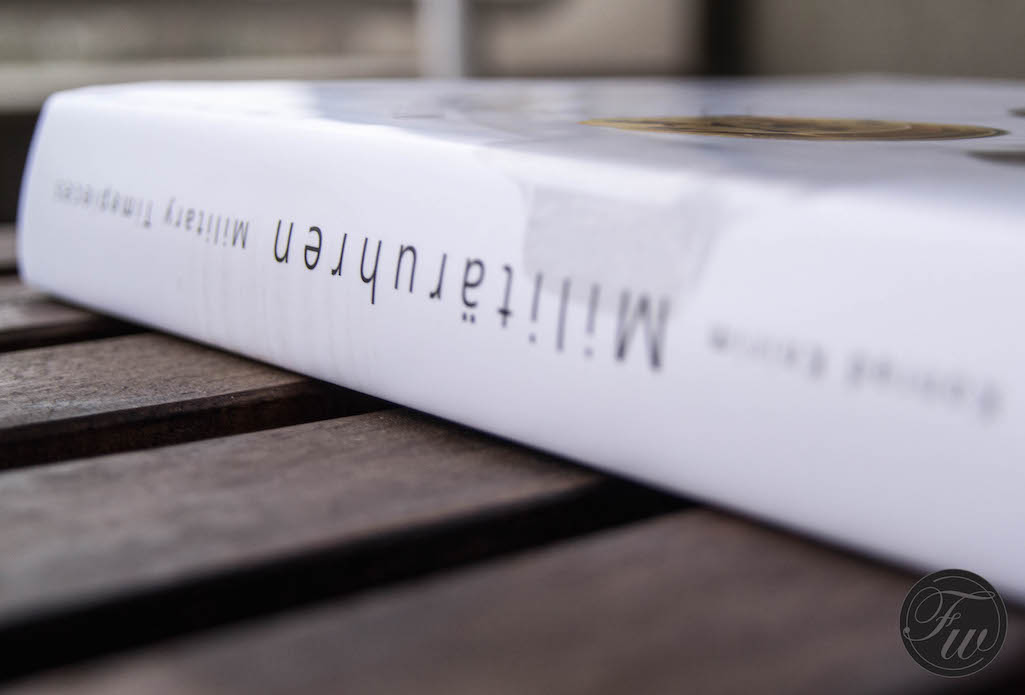 The book(s) we are going to review today are about military timepieces. Dr Konrad Knirim, the author of these wonderful references is a well-known person in the German/International watch community. He has over 30 years of experience and a vast knowledge of these watches, clocks and other military time measuring devices. He published 2 books; German Military timepieces (Vol. 1.) and British Military Timepieces (Vol. 2.) of which we will look at the first one today. The Second part of this article about the British military watches will be published in a separate article soon. However let’s concentrate on Volume 1 of this 2-piece military watch resource. Without further ado we are presenting the review of 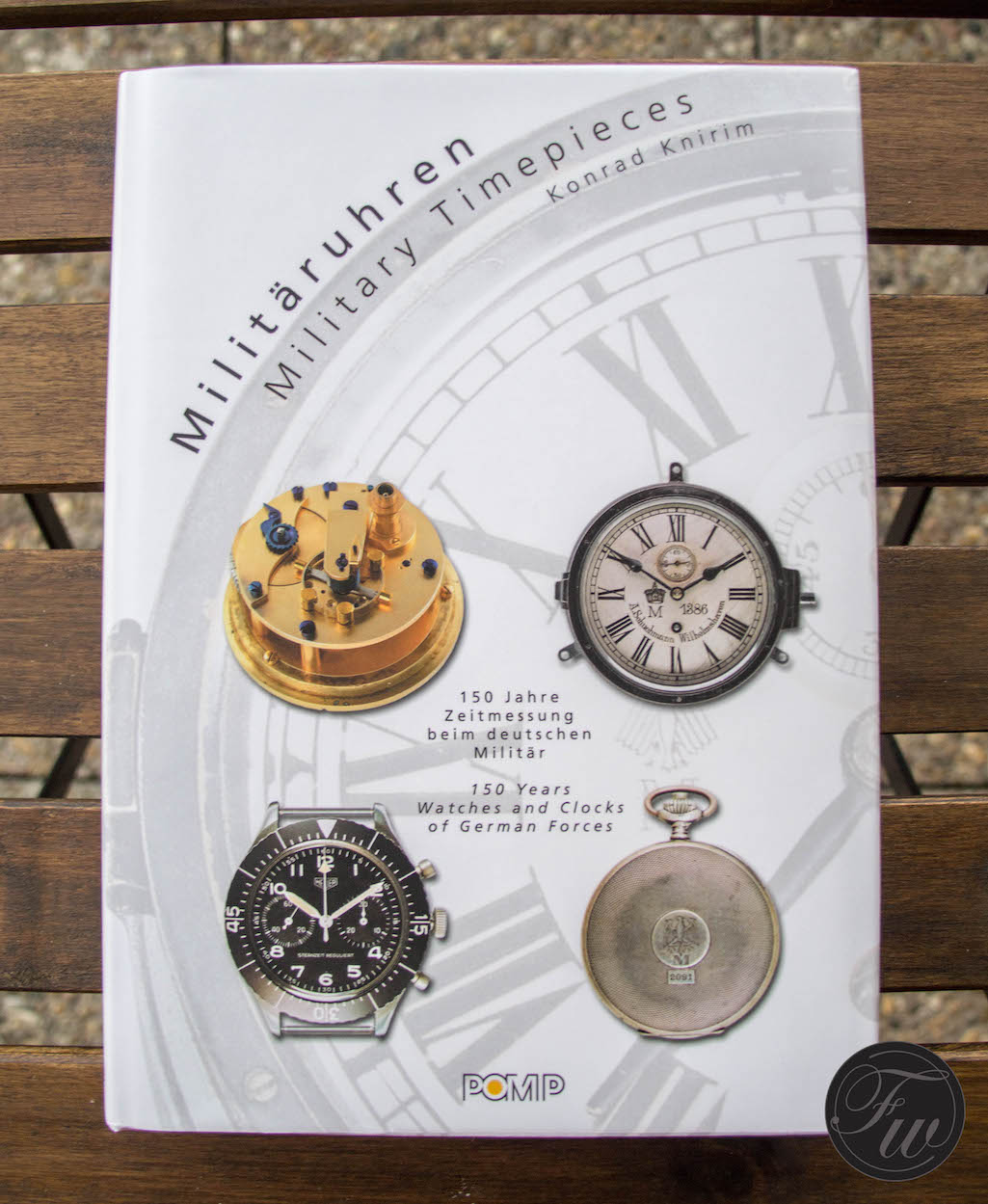 This is one heavy book both literary and figuratively speaking. With over 600 pages filled with high-resolution photos and information it gives you a thorough explanation on various models from many different eras of German military watches. There are 10 main chapters in the book and these are the following:

The German Empire and WW I.

The funding of German watchmaking dates back to the days of the German Empire. This chapter amongst many things focuses on these years giving you a bit of background knowledge on the precision watchmaking especially in the Dresden area (close to Glashütte). Starting with the early German sea chronometers then moving on to the Empire of 1871 and Wilhelm II. (The last German Emperor and King of Prussia). Various pocket watches are mentioned, ship chronometers of the navy, pocket watches of the Prussian Flying Brigades and finally the army in the German Empire. 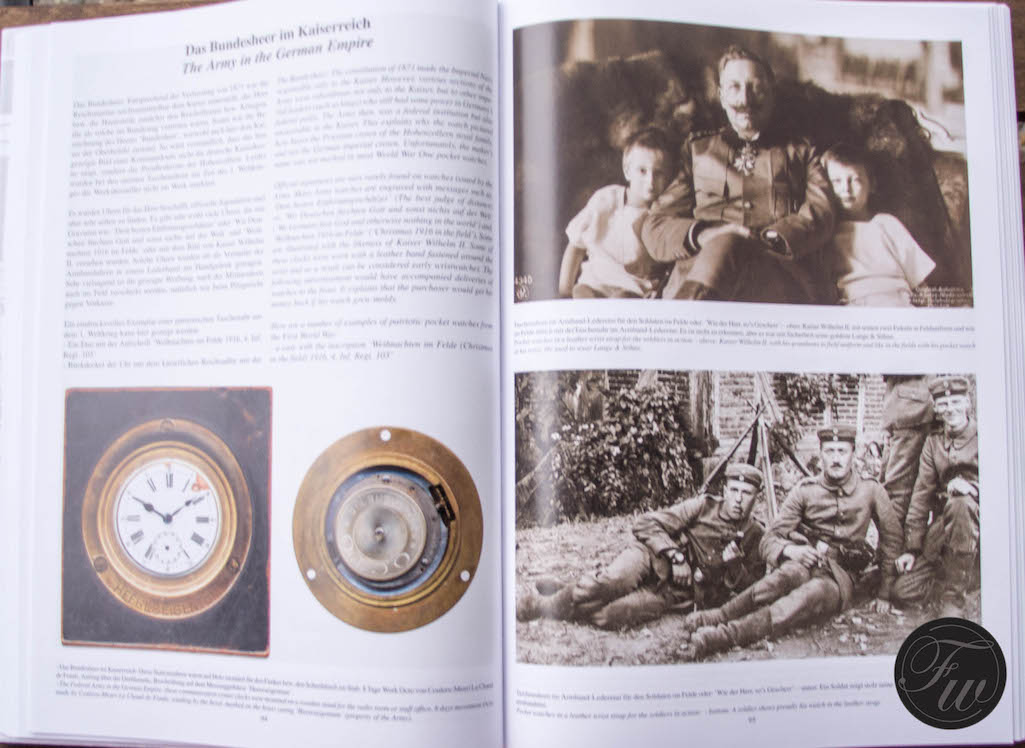 This is a small chapter mainly dealing with the Austro-Hungarian Empire’s navy. Ship and pocket chronometers of all watch manufacturers like A. Lange & Söhne or Josef Nicolaus Wien can be seen as well as some gold Patek Philippe pocket watches given out as awards by the last 2 Austrian emperors.

After their defeat during the First World War the Imperial Army was founded. This was a controlled and limited force. This chapter tells us about the watches and clocks of this force during the time period of 1919-1932. If you are a vintage watch lover this is the chapter you’ll find the first interesting watches. Pilot’s watches made by IWC and Omega as well as chronographs by Heuer, Doxa and numerous other brands. You can still find many watches of this era around on eBay for instance; just think of those Helvetias with the propeller-like logos, riveted bezels and sub seconds. 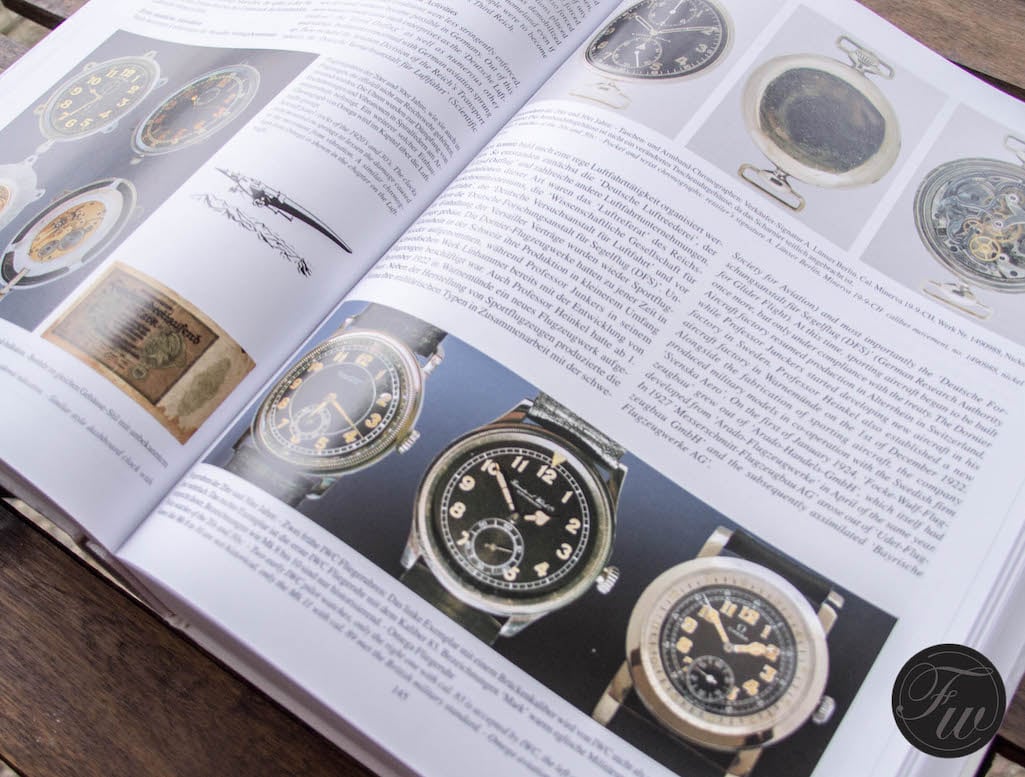 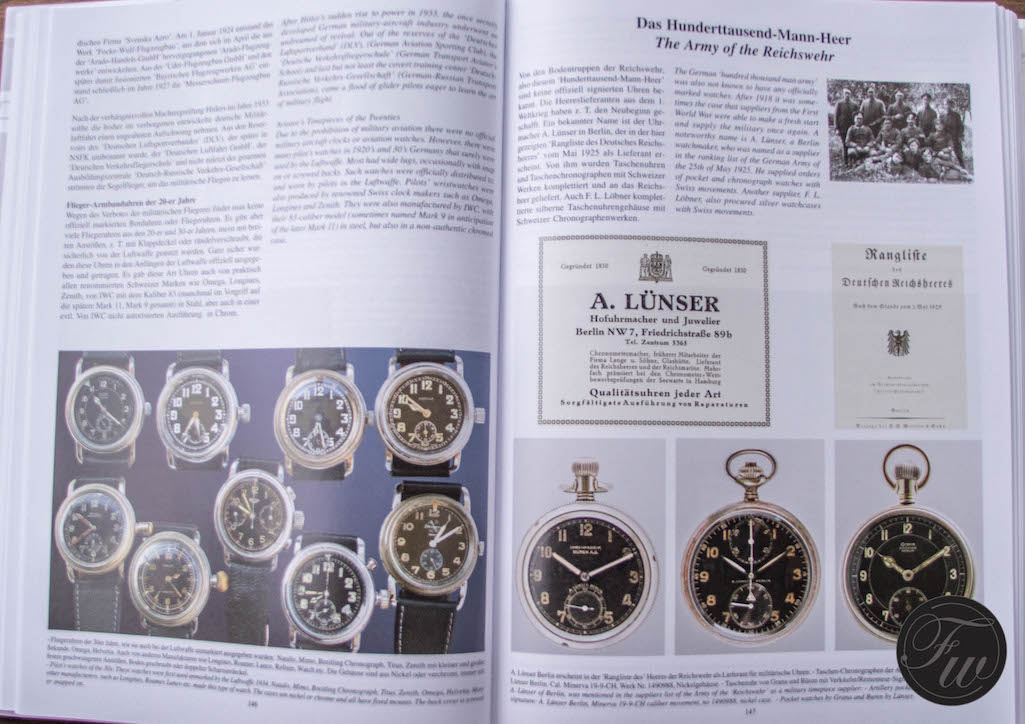 The ’Third Reich’ and WW II.

This is not really a chapter more of an introductory section for the upcoming 3 segments all detailing certain divisions of the German military in the Second World War.

The Navy in WW II.

As you would think this is by far the largest chapter in German Military Timepieces, spreading out to almost 120 pages (out of roughly 600). It starts with wall clocks the navy used in their offices and communication centers. We then move on to ship chronometers, a reoccurring topic on the book, only to continue with navigation watches and then navigation wristwatches. You’ll see many interesting, never-before heard facts – for instance that some German divers during the war were equipped with early Panerai watches. 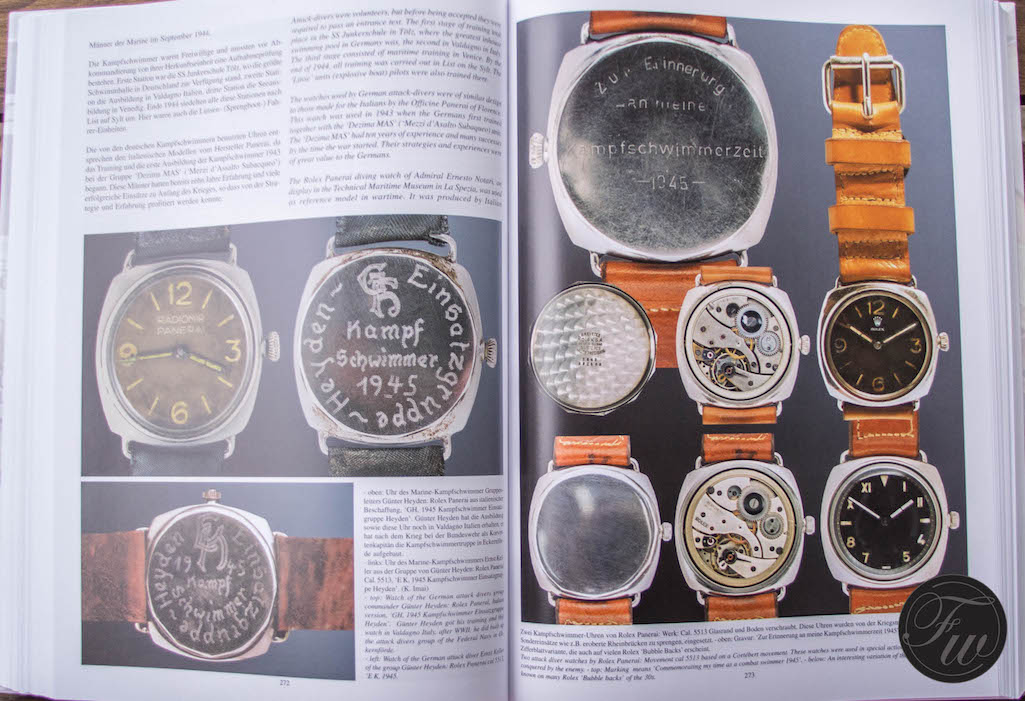 The Air force in WW II.

Close in size to the previous section, this chapter not only discusses the clocks and watches of the Luftwaffe but also guides us through their history through these magnificent timepieces. A number of inscriptions used by the force are collected to help us identify them if we come across any in the future. Clocks used in command centers, chronometer airplane instruments bolted onto dashboard of bombers (with pictures of how the inside of a Ju-88 bomber would look like) and finally those infamous A. Lange & Söhne pilots watches and other chronographs. You can find size comparison of Minerva models used by the Wehrmacht, compare different Universal Geneve military issued pieces, learn about the difference between mono-pusher and double pusher Hanhart chronographs, the list goes on and on. I must say this chapter is the highlight of German Military Timepieces for a true vintage military chronograph nut like myself. Page after page you see dial, case back and movement shots of almost, if not, all of the watches of this era. It is such an impressive collection to browse through. 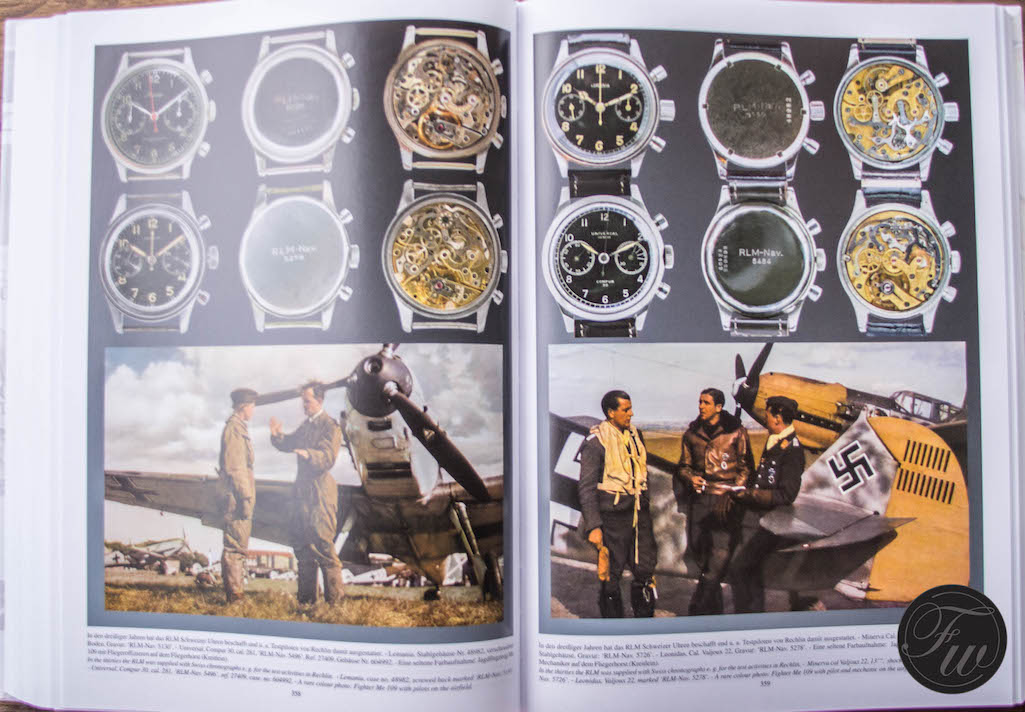 The Army in WW II.

Other than the “usual” station clock the chapter mentions the clocks the Germans used in their trucks (or vehicles in general) or the chronograph pocket watches they issued to the artillery. Most important producer of these were Alpina, that used movements from the most prestigious watch houses like; Minerva, Universal Geneve, Excelsior Park, Lemania or Valjoux. Another interesting section of this chapter is about the timed detonators built by watch companies to be attached to bombs and mines. The last part tells us the story of different clocks and watches used by the infamous Waffen-SS.

We all know what happened after the war. This however had a major impact on the armed forces of Germany; east and west went completely opposite way and this is clearly visible also by the different watches they used in their military (for what was left of them anyways). This is the introductory chapter of the next 2. First we can have a look at the East and the heavily socialist-influenced timepieces they used/had to use. Then we continue with the West, where the existing brands would struggle to stay alive. 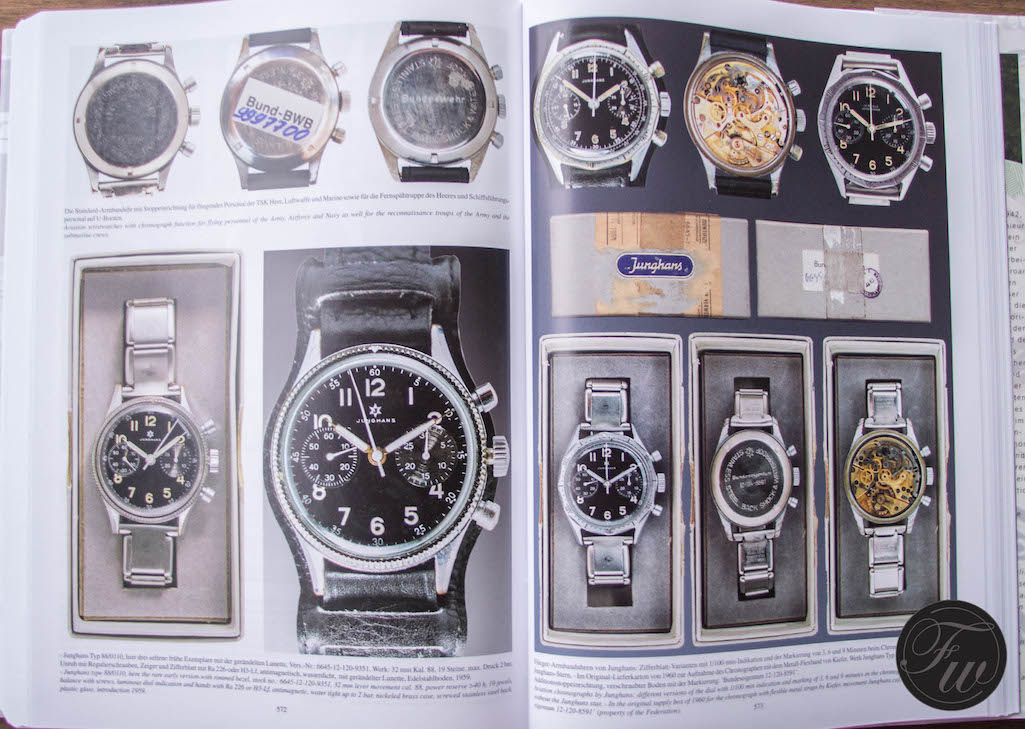 The Forces of the GDR

The cradle of German watch industry, Glashütte, laying in the eastern part of the country became part of the Soviet-occupied territory. Here a few brands like GUB or Ruhla were selected, merged and controlled to produce everyday watches for the communist block. The ship chronometer clocks were still produced by Lange until the mid 70’s, when slowly quartz movements took over. The Frogmen and the Attack Divers used Glashütte-branded, quartz or automatic diver watches, the air force GUB-branded chronographs.

On the other side of the wall, the territory occupied by the Allies had a completely different way. The Bundeswehr (Military of Germany) used the watch companies existing in the west like the Black Forrest or the Hamburg area as well as Swiss brands. The divers were given Blancpain, IWC or Doxa automatic dive watches. The Air Force was using dashboard clocks from Leonidas and later Heuer, Brequet or Sinn. The truly intriguing however were the chronographs issued to the pilots. We learn that the first watches used were still Hanharts, similar in design than the wartime versions but smaller in size. After Hanhart another brand from the Black Forrest; Junghans were chosen to equipped the forces with chronographs. You probably read Michael’s article on the various Bund watches, that editorial perfectly fits here in the timeline. We can follow all history of all these amazing and collectible vintage watches up until late 1970’s. Then the book deals with the army watches and finally gives us a short run-down of the chronographs used by the Allies (like the USAF Blancpains, the RAF Lemanias, the Dutch Movados or the RCAF Universal Geneves).

The Appendix features a ton of document copies, serial number charts, and so on. 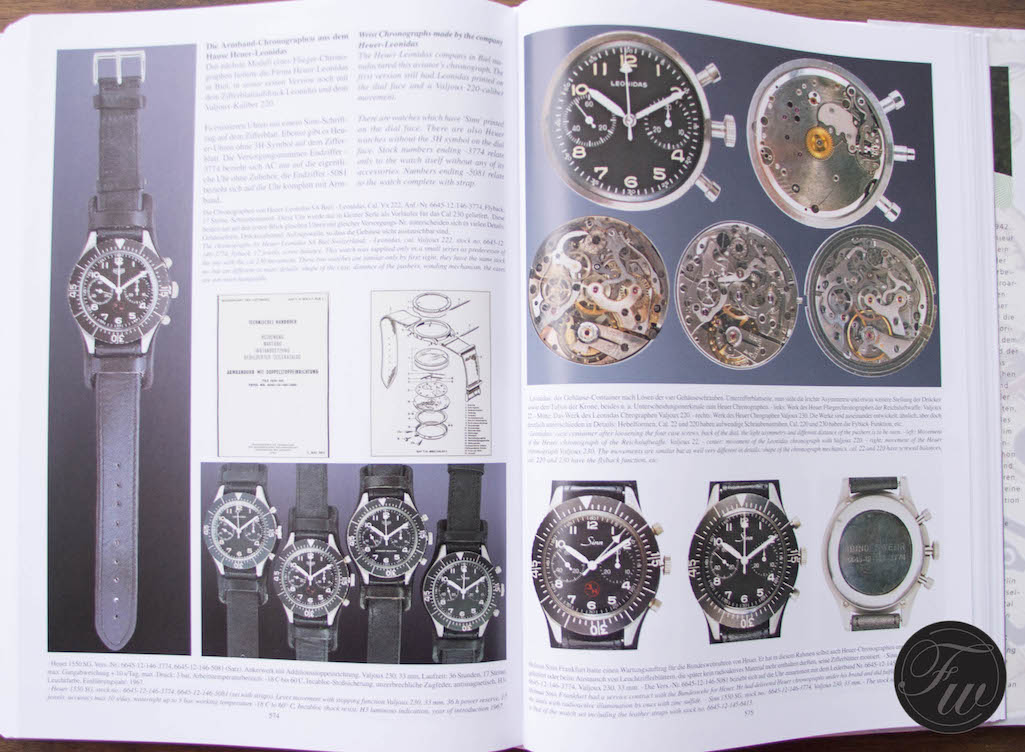 As said it before, German Military Timepieces is a must have for every watch collector who shows a little bit of interest in the military time instruments of a bygone era but also for anyone interested in history. You can follow the history of Germany trough these magnificent timepieces up until recent times. The effort Mr. Knirim put into this book is tremendous and the collection of the different historical photos, documents and the actual items themselves form a great cohesive work. We will soon do a review on the second part of the series, which focuses on “British Military Timepieces”. In the meantime of you would like to order this book, or both, you can do so by getting in touch with Mr. Knirim through his website. He is a very friendly and helpful person and a truly passionate watch lover with a long pedigree in the watch community. Alternatively you can order his publication through Amazon. The price of the book is €148, about the same as a decent leather strap. Trust me though; you will not regret buying this book. We are planning on using it every time we are dealing with anything related to the topic to provide you some further background information on various pieces. I would like to thank Mr. Knirim for his support and congratulate him for these marvelous books, enjoyed every minute reading them.

Hot Topics
Introducing: The Omega Speedmaster Super Racing With Spirate System
165 comments
Design Vs. Specs — Which Is More Important To You When Buying A Watch?
87 comments
New Release: The Limited-Edition Seiko Prospex SLA067J1 Diver
63 comments
My Predictions For New Omega Speedmasters In 2023
58 comments
The Best Independent/Microbrand Alternatives To The Rolex Explorer In 2023
52 comments
Popular
A Question From A Reader: “Which Modern Speedmaster Is Closest To The Original Moonwatch?”
Robert-Jan Broer
14
(From The Archives) Shut Up & Read The Truth About Cartier Watches
George Cramer
21
#TBT Top Vintage Seiko Divers – They’re All Here!
Michael Stockton
16