Girard-Perregaux is one of these interesting manufacturers from Switzerland that is not on everyone’s radar. It is a rather small manufacturer located in La Chaux-de-Fonds but with very impressive and skilled workshops. We’ve visited the manufacture of Girard-Perregaux earlier this year (click here) and were quite impressed by their current collection of watches. One of the watches I really fancied myself is their sporty Sea Hawk in stainless steel. Girard-Perregaux sent us this particular watch so we could test drive it for a while and do a review on the Sea Hawk. 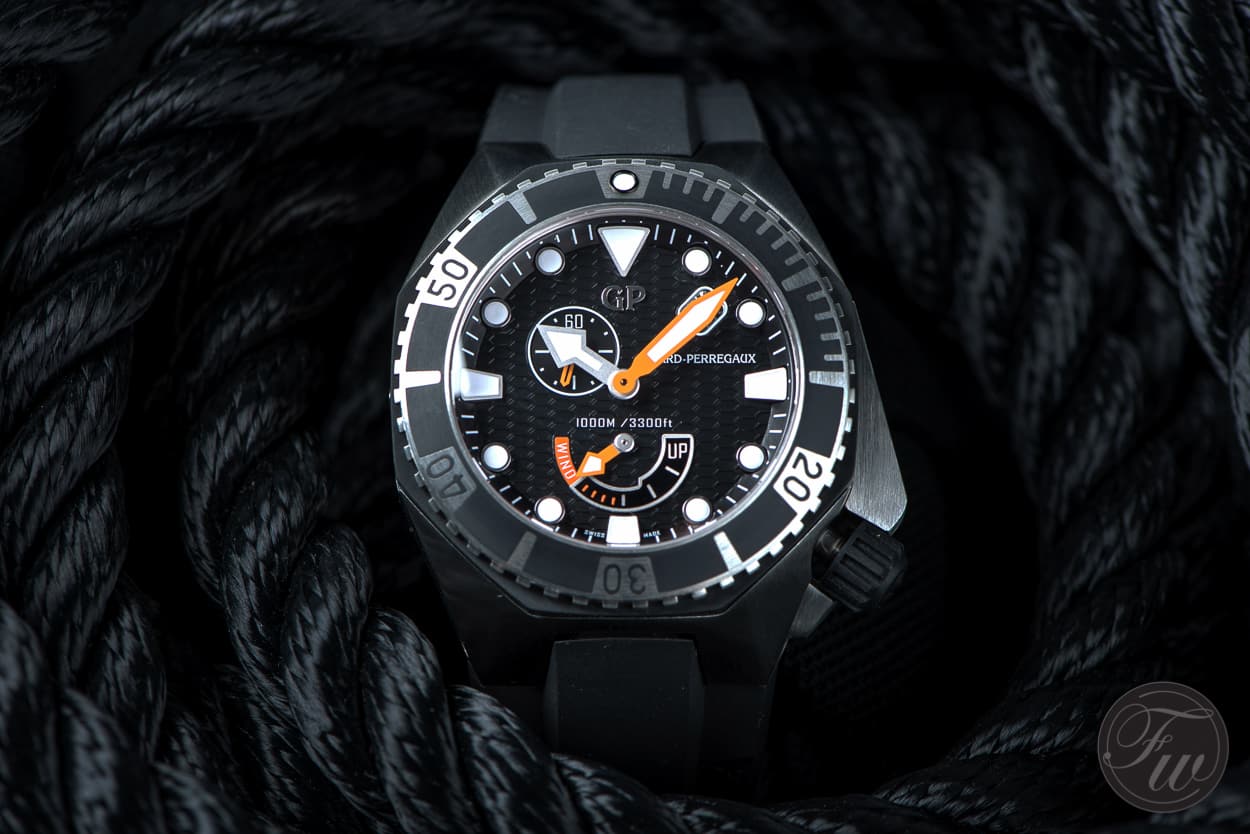 Some of you who already know Girard-Perregaux quite well, might recognize the Sea Hawk name from their collections from decades ago. In the 1940s, Girard-Perregaux already introduced a collection of Sea Hawk watches that do not come close to the actual Sea Hawk in terms of design, but which were water proof already. It wasn’t until the 1960s and 1970s before the Sea Hawk line-up became a true diver’s watch.

I tried the GP Sea Hawk with reference number 49960-19-631-FK6A, a 44mm odd shaped timepiece crafted out of stainless steel and that comes with a nice black rubber strap. The first impression is that it really is a big watch. Not only in diameter, but also due to its height of 17,1mm. Something that might get in your way when wearing it with a suit and shirt. However, this watch isn’t for suits and shirts! It is a diving watch. The most remarkable thing about this watch is – without a doubt – the position of the winding crown. Also, the picture above really shows the honeycomb pattern in the dial of the Sea Hawk, a very nice detail. 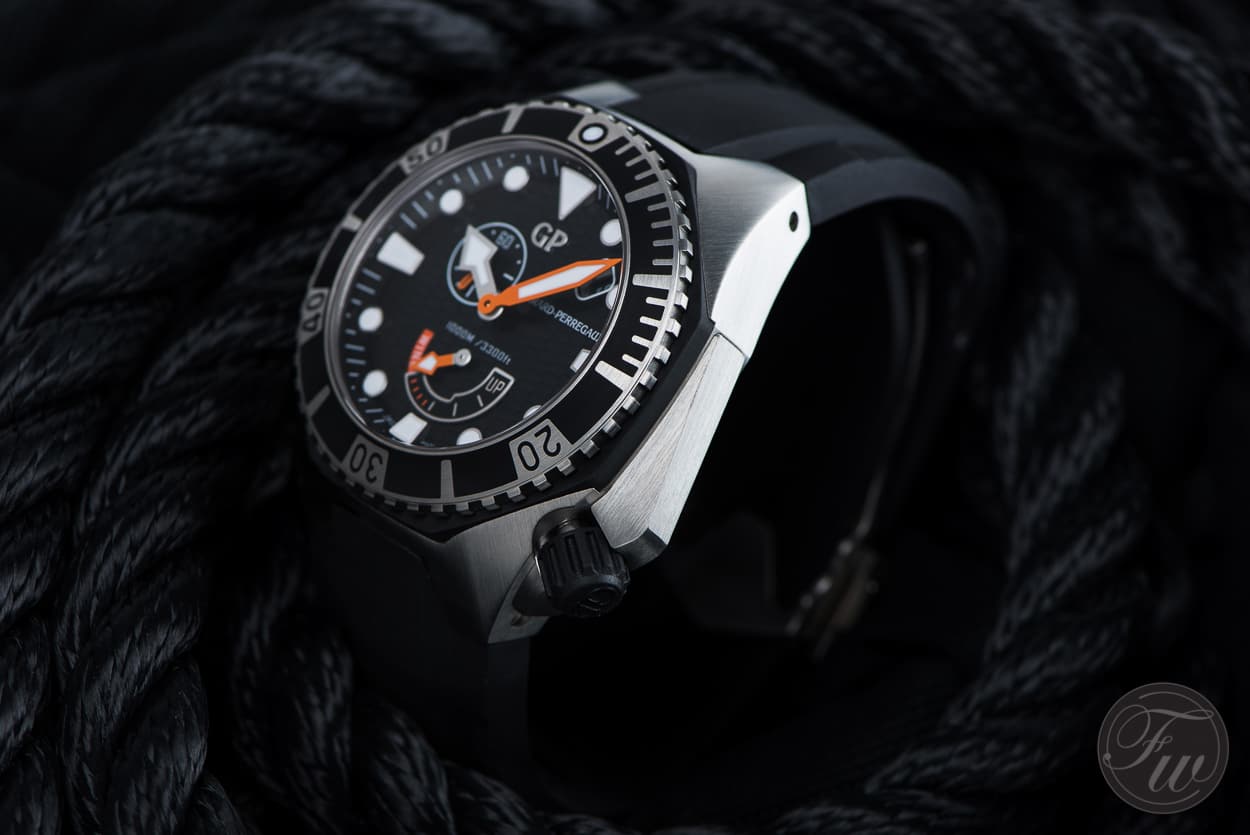 The other thing I though was cool – hey, I am Dutch – are the orange accents. The orange minute and second hands and the power reserve indicator with orange hand and printing. I assume that orange is a color that is well recognizable under water, as a lot of diving watches (from other brands) seem to favor orange as well. Another nice feature is the luminosity of the dial. The hands and hour markers are very bright in the dark and makes it an easy to read watch. The photo below shows the Sea Hawk in poor light conditions with its bright hour markers and hands. However, it also shows that the date aperture reveals that the date is quite ‘deep’ inside the movement. Probably because GP used an add-on module for the power reserve, it shows that the date feature is located at the base movement. I’ve noticed that this watch is very readable under almost any angle, but the date can only be read under an angle up to 40 or 45 degrees. I’ve seen worse though and it is actually just one of the nitty gritty things I have to comment on this watch. 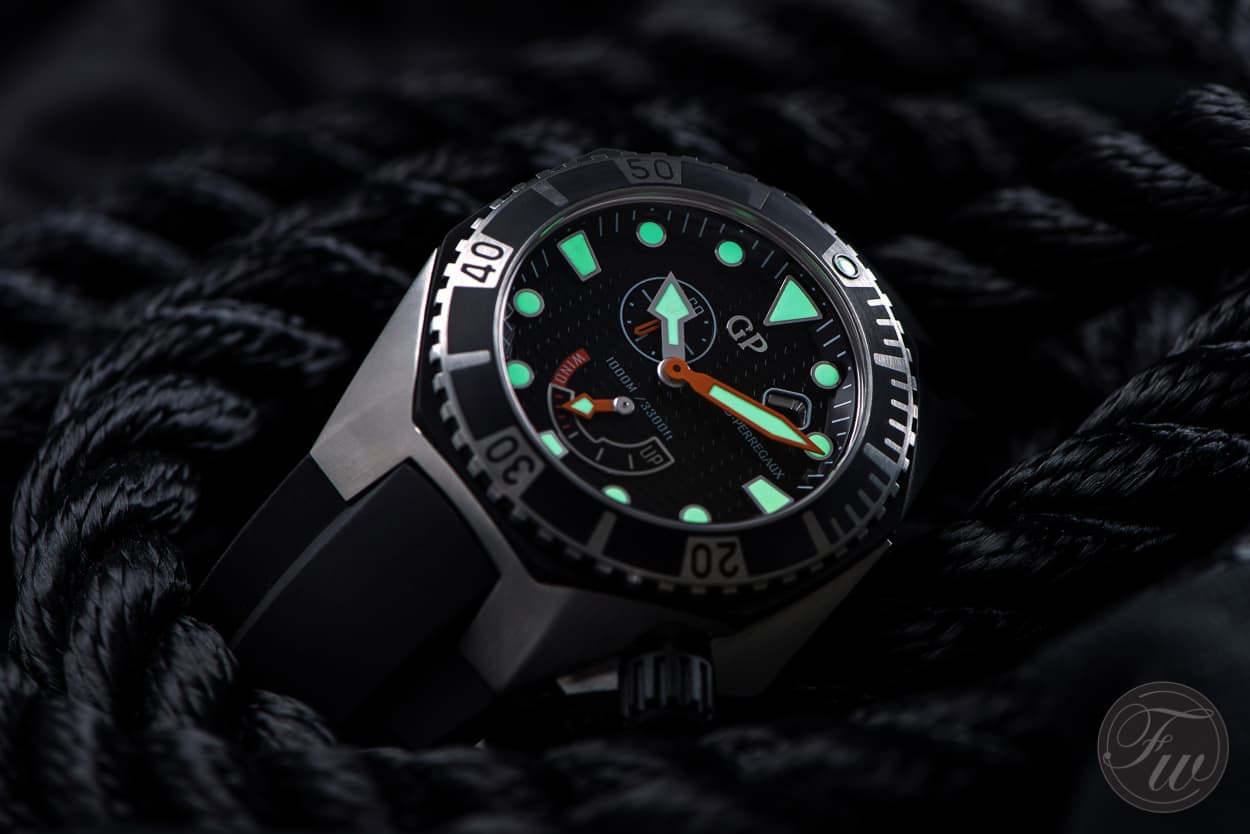 As you can see on the photos, the finish of the Sea Hawk case is matt brushed and has some nice and sharp edges to it. I love this type of finish, as it really indicates it is a tool watch. A watch with a purpose and not only as a show piece.

Although the applied Girard-Perregaux logo has been used on the dial, it is also fully written in white just above the 3 o’clock marker. Above the Girard-Perregaux wording, there is the date aperture with a white border. Although I often personally think a watch can do without a date aperture – as it breaks the design of the dial a bit in my opinion – it seems that the majority of watch wearers does prefer a date function.

Looking at the left side of the watch, you will immediately notice the automatic helium valve escapement that you’ve probably also seen at other diving watches.  The photo below also shows the fine finish on the case done by Girard-Perregaux, it is really beautifully done. 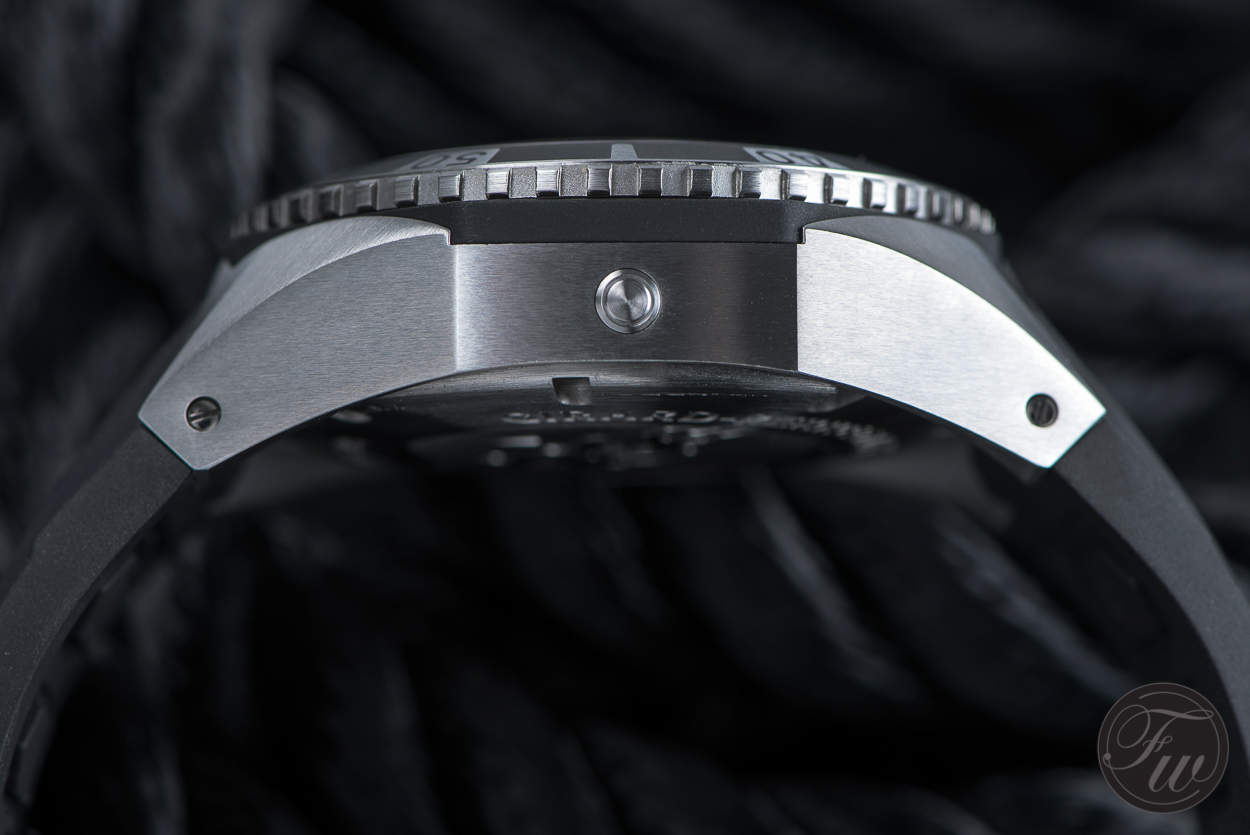 Inside the watch, Girard-Perregaux has used their in-house developed and manufactured movement caliber  GP03300-0074. A self-winding movement based on the GP3300 movement with a power reserve complication added to it. However, like every diving watch should have, the Sea Hawk has a stainless steel caseback not revealing anything about its inner workings. Although I love the look of mechanical movements, in some cases it just doesn’t make sense.

Instead, Girard-Perregaux decided to have this cool dragon-like logo embossed in stainless steel. The photo below also shows the perfect integration of the rubber strap with the 44mm case. 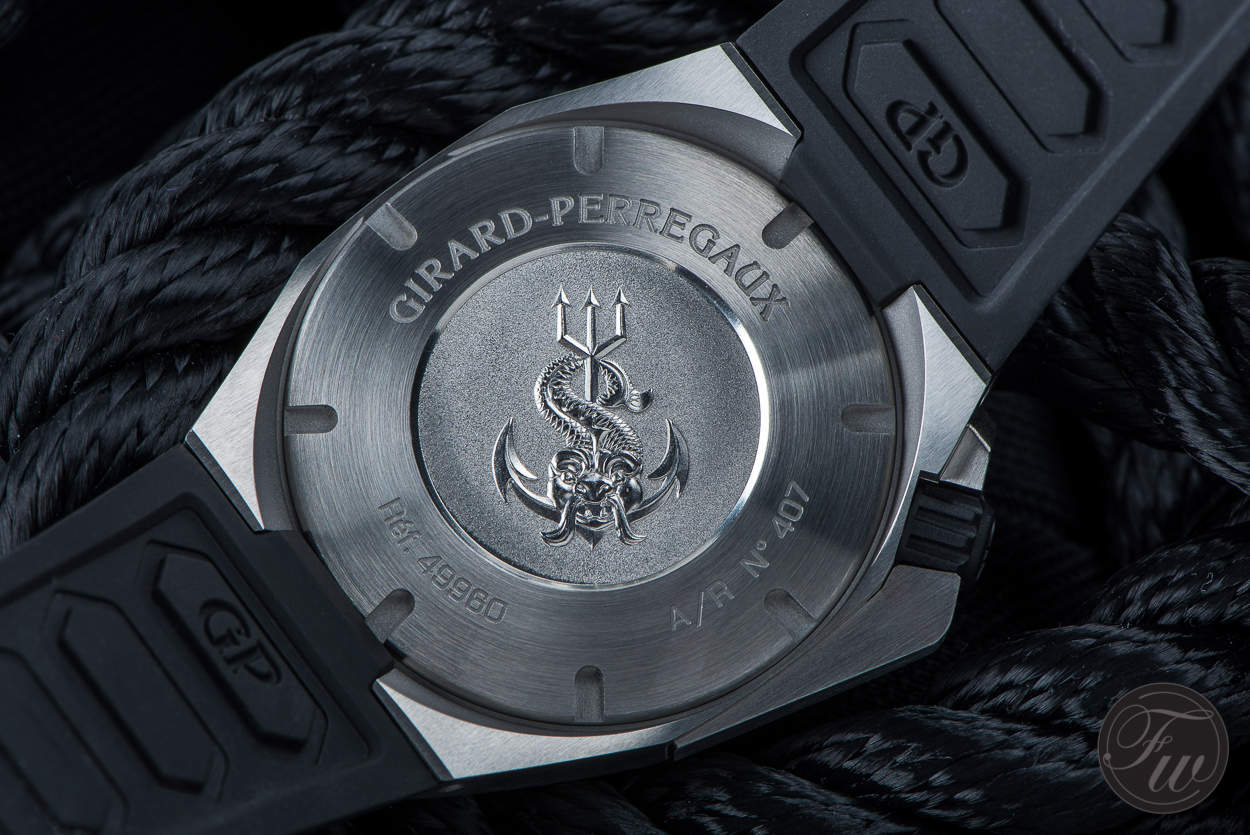 The Sea Hawk on a rubber strap comes with a very comfortable folding clasp. Some of you may be aware of the fact that I prefer buckles most of the time, but this stainless steel folding clasp was actually a big surprise. Although it appears to be quite big and thick, it wears great with this watch. The finish of the buckle is also quite impressive. The single fold clasp has been treated with a brushed matt finish and the release-system feels very solid and did not fail once during the use of this watch. The second picture below shows the folding clasp when it is closed. The finish, engraving and shape of the clasp are just awesome. 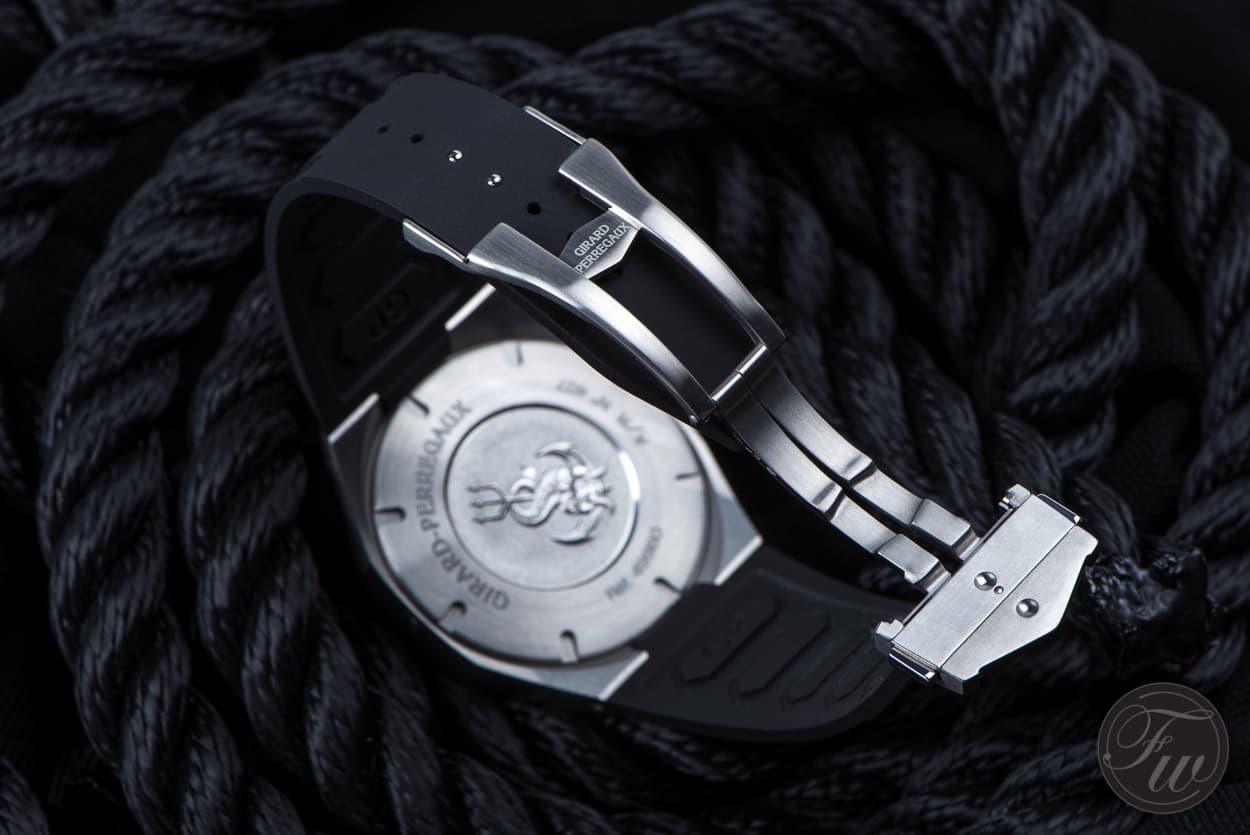 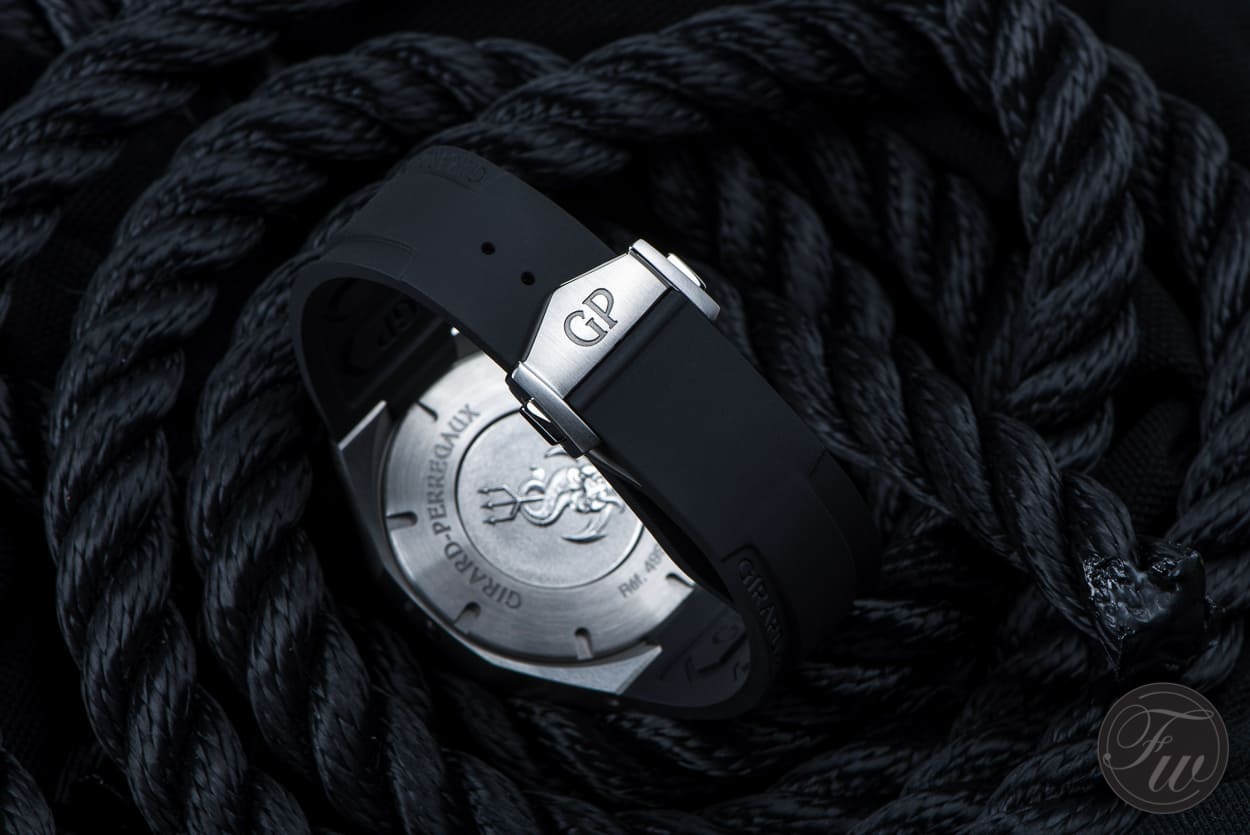 Also, if you look closely at the pictures above, the rubber strap has the ‘Girard-Perregaux’ wording on the outside and the GP abbreviation on the inside. A very nice detail and yet without being too loud. Very subtle actually.

I expected this watch to wear similar to the Audemars Piguet Royal Oak watch, like the Offshore Diver. But it doesn’t and actually is totally different from the octagonal shaped Royal Oak. The Sea Hawk is bigger and a bit more sporty. I also feel that where the Royal Oak Offshore tends to be a bit of a show-off piece (no offense) based on a classic Genta design, this Sea Hawk is really a watch for use in and near the water.

The unusual shape of the watch due to the crown guard at 4 o’clock is something I quickly got used to. In the end, it is one of the things that will make you identify this watch clearly as a Girard-Perregaux Sea Hawk. I like sports watches to have a different shape than round, as round – to me – indicates we are talking dress watches. The Girard-Perregaux Sea Hawk is a real sports watch. The robust case, automatic helium valve, diving bezel and rubber crown and strap make it a no-nonsense tool watch from one of the few true manufacturers out there. You can either love or hate the design but that’s something I like about watches like these. It is not an everyone’s friend but neither does it needs to be. People who will buy this watch are probably people who do not care much about what other people think.

The list price of the Sea Hawk is just below $12,000.- USD. More information can be found here.