Recently, Seiko has been celebrating its 140th anniversary. This milestone also coincides with 20 years of the Japanese brand’s ingenious Spring Drive movement. The beating heart of this watch has been developed by an elite team of craftsmen at the brand’s Micro Artist Studio in Shiojiri. And it seems that each time Grand Seiko releases a Spring Drive watch, it comes in an even more mouthwateringly beautiful package—this time capturing the wintery backdrop of Shinshu.

The three-handed Grand Seiko watch paints a lasting memory of the snowy scenes that surround the brand’s manufacturing facility for its Spring Drive watches. It features a pink gold case with matching faceted hands and indexes, discreet diamond detailing, and a classic brown hand-stitched leather strap to soften the entire design. 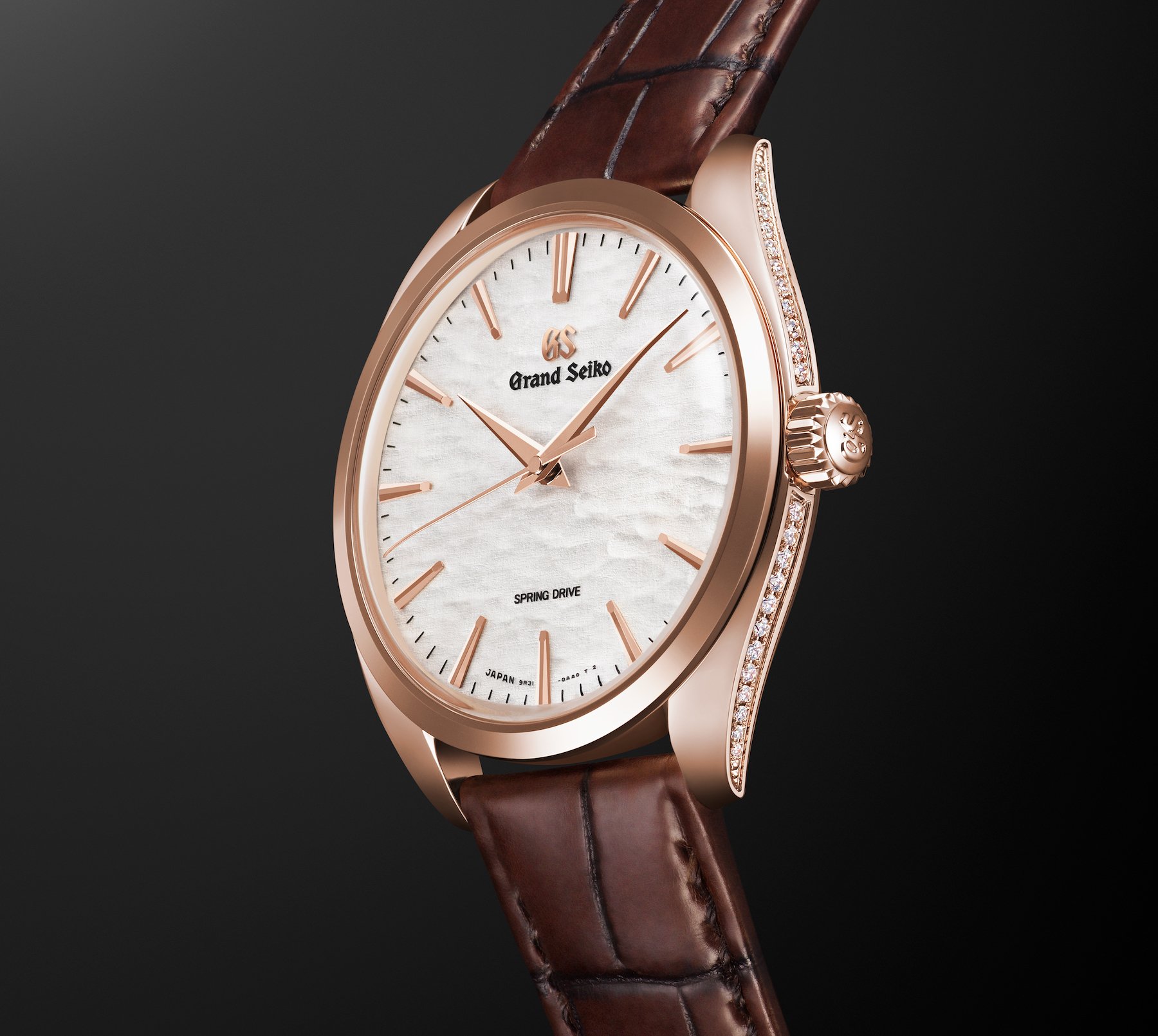 I’ve always looked at Grand Seiko in a way in which each new design celebrates the culture and heritage of its home nation as opposed to emulating popular Swiss or German watch brands. Not following the crowd, its timepieces feel unprocessed and never lack distinction. They also encompass time-honored Japanese watchmaking traditions.

The new Grand Seiko ref SBGY008 belongs to the brand’s Elegance collection and follows the design language of a typical Grand Seiko watch but with some added textural dial finishes that really enliven its soul and spirit. In the past, there have been some Grand Seiko watches whose habillage has expressed nature and the passing seasons of the year. Take, for example, the arresting dials of the Grand Seiko Elegance GMT 4 Seasons Collection. To extend on this concept is a new Elegance Collection watch with added diamond detailing for an additional luxurious dimension. 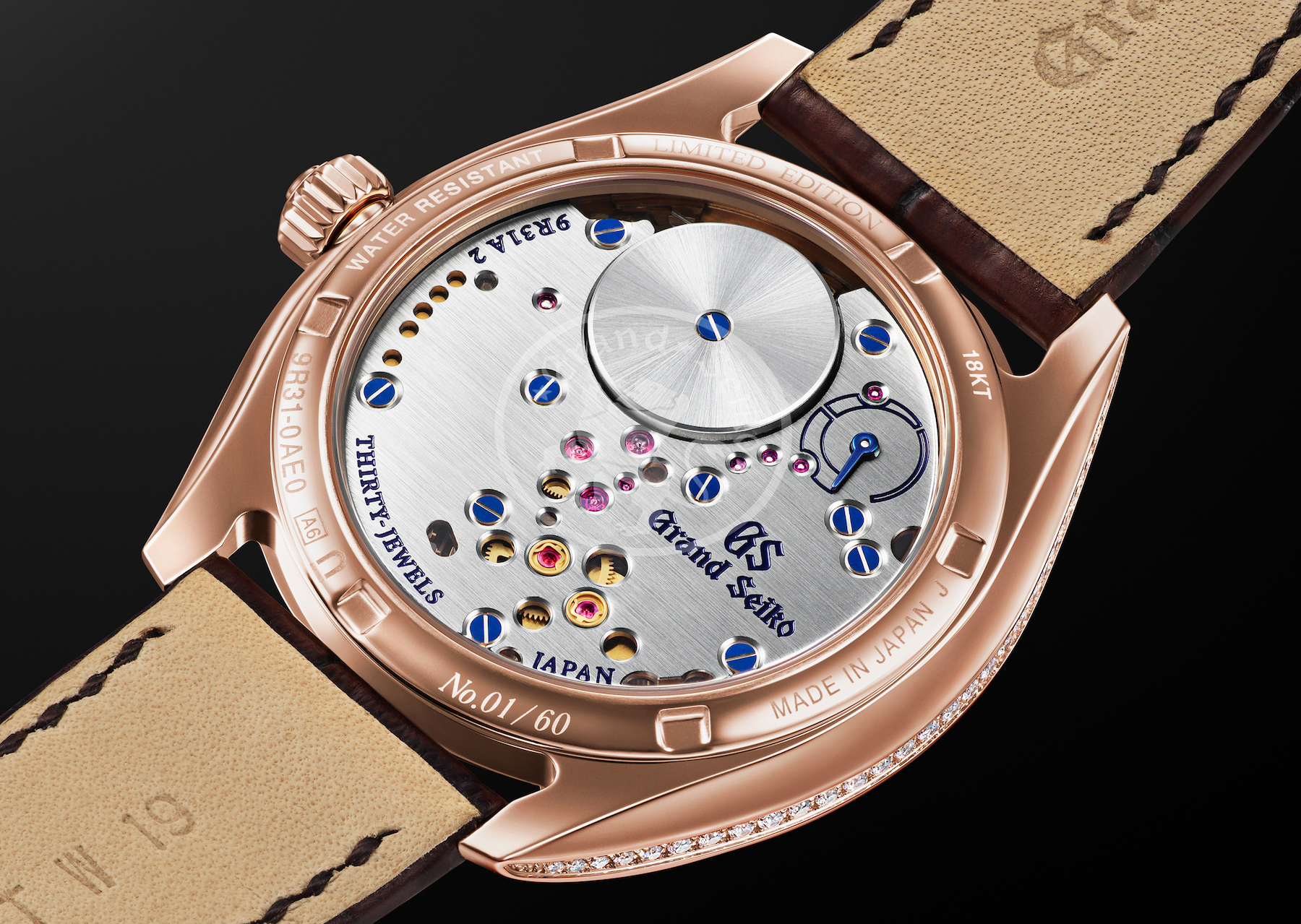 Snow – it’s a recurring theme for the Japanese watchmaker, especially how the sunlight hits its infinite textures on the ground. You can’t help but feel a tad tranquil when you gaze into the dial of the new Grand Seiko SBGY008 watch. Experts at the brand’s manufacturing facilities have gone to great lengths here to enable pockets of light to hang inside the crevices of the dial, mimicking the way in which shimmering snow falls from tree branches. Subtle – just like the “Snowflake” models by Grand Seiko – this timepiece from the Elegance collection limits itself to basic hours, minutes, and seconds. These rose gold hands cast a shadow across the dial’s Shizuri-Yuki landscape as they travel. 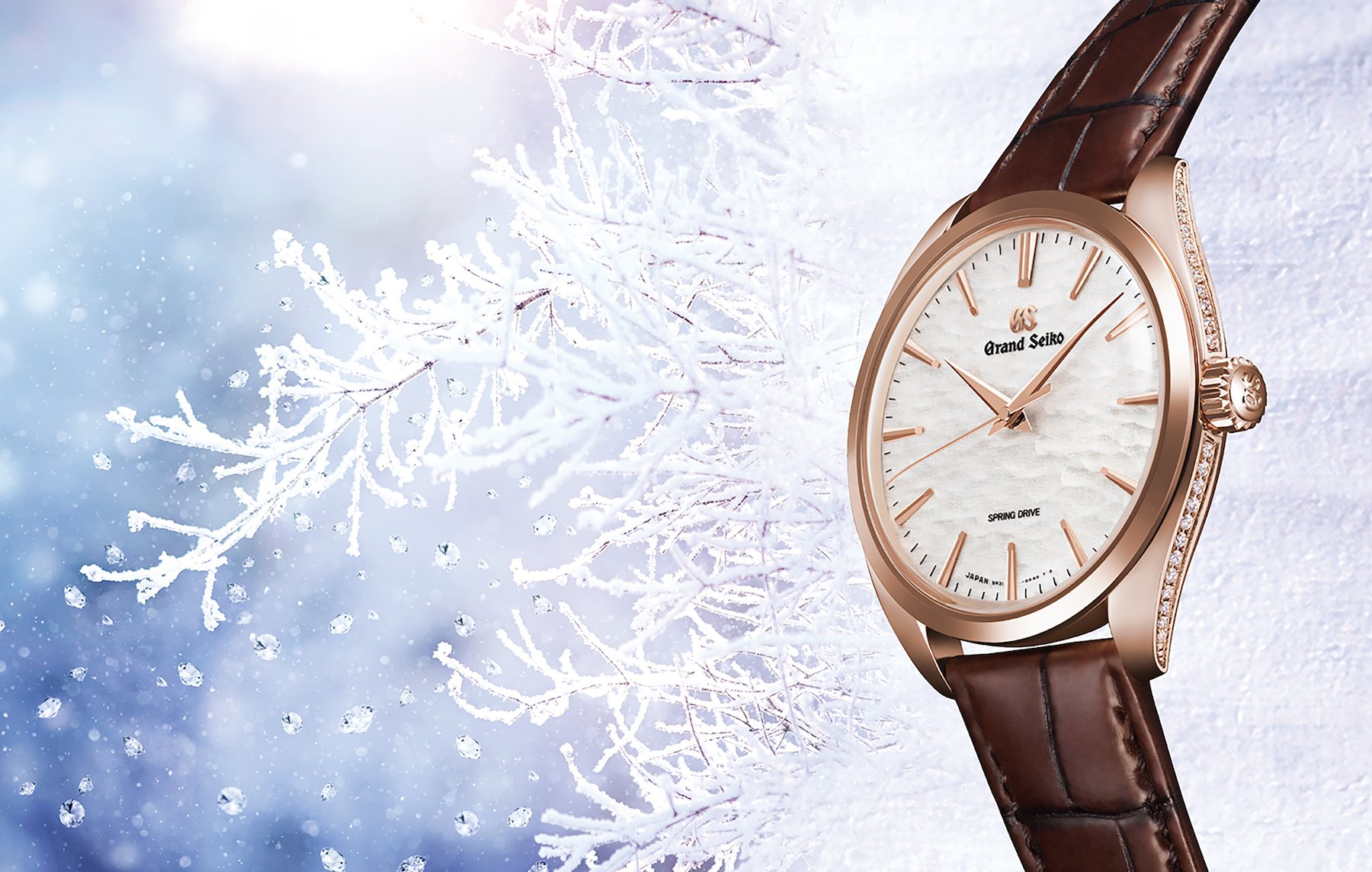 Bestowing a sense of calm upon the dial is the gliding motion of the constantly moving rose gold second hand, courtesy of the Spring Drive Calibre 9R31. Unlike a standard quartz movement, it goes without a battery and is powered by mechanical energy stored in the movement’s twin barrels. Surpassing COSC standards, the movement is said by Grand Seiko to promise an accuracy rating of +/- 1 second per day. This hand-wound proprietary Spring Drive technology is capable of a 72-hour power reserve and features a power reserve indicator on its reverse, viewable through a sapphire-backed case. It’s here that you’ll also see the tempered blued screws, beautifully finished bridges, and many other perfectly engineered components to the Calibre 9R31 as it performs. 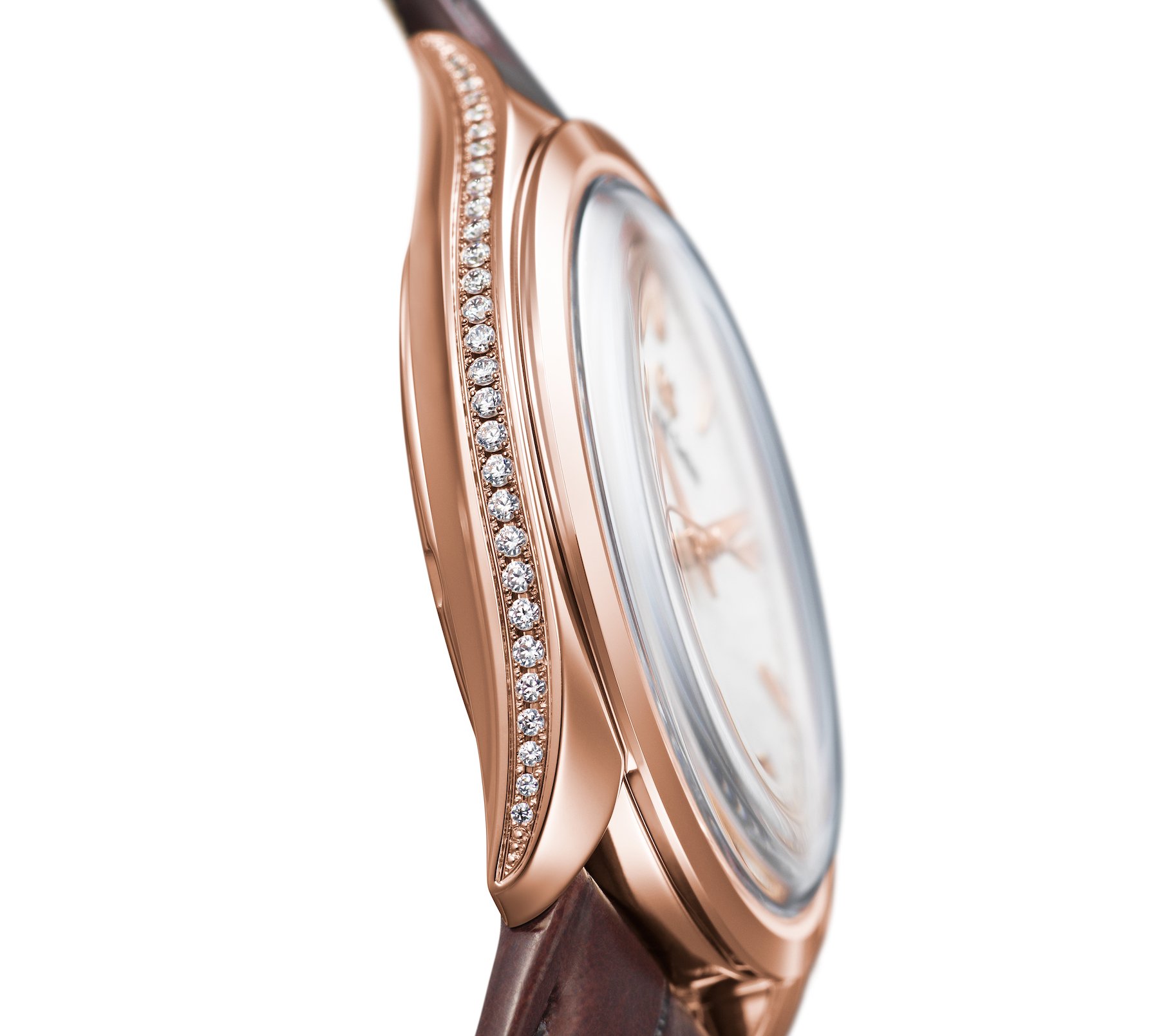 It is not just the meticulous layering of materials across the epidermis of the dial that imitates Shinshu during the winter season, however. There are hand-set diamonds secured into the side of the model’s case that follow its curvature and round the design off tastefully. The nice thing about the diamonds set into the side of the case (as opposed to the front of the bezel) is that they’re served up to the wearer as a sort of side order to the main dish. They aren’t “in your face” all the time. They do flirt with the light but only upon invitation. Twist the case and there they are. Look head-on at the watch and you needn’t even know they’re there at all. 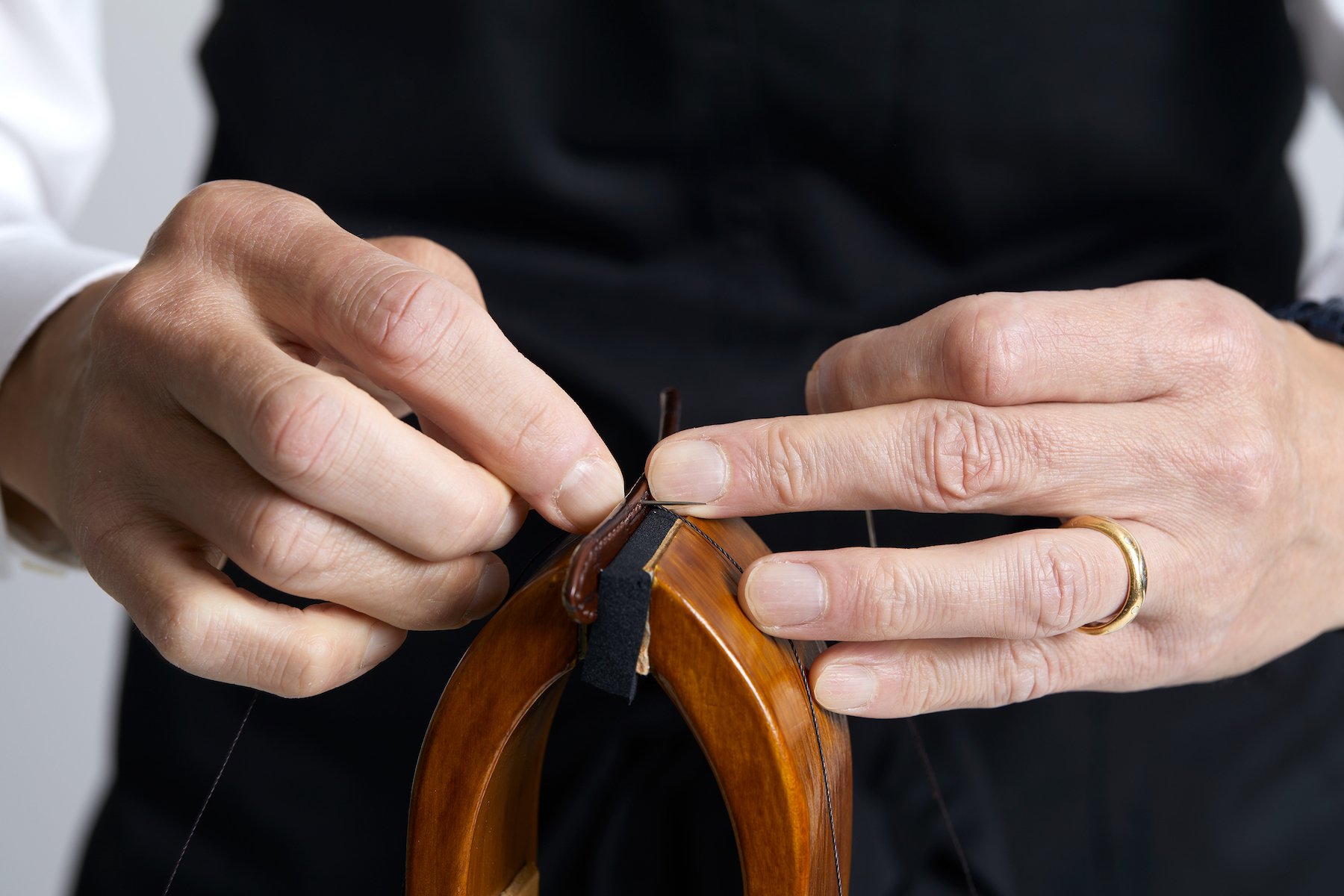 The fully polished 18ct rose gold case of the new Grand Seiko SBGY008 takes residence upon the wrist with an unimposing 38.5mm diameter and sits at a depth of 10.2mm. It’s not the thinnest case ever, nevertheless, it is part of the Elegance Collection, and anyway, since when has Grand Seiko ever been known for its super-slim cases? Still, the watch will, no doubt, convey a feeling of slightness thanks to its sloping lugs. Probably accounting for some of its thickness will be the top of its case, kitted out with a domed sapphire crystal glass front that has been treated with an anti-reflective coating. The watch is also 30-meter water-resistant.

Although purists may argue that a mechanical watch should house an escapement, the Spring Drive inside the Grand Seiko SBGY008 will appeal to those drawn to the notion of accuracy and the uniqueness of its dial, not to mention the subtle addition of those decadent diamonds. The watch comes fitted on a Grand Seiko manufactured brown crocodile leather strap with black contrast hand-stitching down the sides and an 18ct rose gold three-fold clasp. You can check out more details on the Grand Seiko SBGY008 from the Elegance Collection here.

Hot Topics
Introducing: The Omega Speedmaster Super Racing With Spirate System
165 comments
Design Vs. Specs — Which Is More Important To You When Buying A Watch?
86 comments
My Predictions For New Omega Speedmasters In 2023
54 comments
The Time To Buy Is Now: How The Current Economic Climate Influences Watch Buying And How You Should React
51 comments
A Regret-Free Guide To Buying Your First Luxury Watch — Part Three: Higher-End Options From Omega, Rolex, Grand Seiko, And More
48 comments
Popular
#TBT A Vintage Seiko Buyer’s Guide to Affordable Goodness
Michael Stockton
32
New Hamilton Intra-Matic Auto Chrono – An Introduction (with live pictures)
Balazs Ferenczi
13
The Omega Seamaster Diver 300M Returns – On The Wrist Of Daniel Craig
Paul Dezentjé
17