In the 1970s, Hamilton supplied British Royal Air Force pilots with hand-wound chronographs. The new Hamilton Khaki Pilot Pioneer Mechanical Chronograph is a tribute to the watches used by Lightning, Harrier Jump Jet, and Vulcan pilots. Inside the 40mm steel case beats the hand-wound H-51-Si movement, and looking at the dial, it seems little has changed. But let’s find out how the new version holds up in a hands-on review.

Back in 2017, Mike Stockton wrote about the original chronograph that Hamilton made for the RAF back in the 1970s. In his conclusion, he stated, “The Hamilton Military Chronograph is a really purposeful looking watch with great history. The fact that these watches were really used on the job where the British Commonwealth was participating in various conflicts adds a dose of realism to these tool watches too. Me, I like the fact that it’s extremely wearable and simply attractive.” And if you look at the watch, it’s easy to see why he enjoyed the chronograph that was outfitted with a Valjoux 7733 movement. The dial looks purposeful, and the case shape is interesting. The watch makes me think of my favorite RAF plane from that era, the English Electric Lightning. It was a Mach 2 interceptor with two engines on top of each other and a most-elegant wing design.

Hamilton RAF chronograph from the 1970s

When I compare it to its historical inspiration, what immediately strikes me about the 2022 Khaki Pilot Pioneer Mechanical Chronograph is how much more muscular it is. The case grew from 38.5mm to 40mm and the new watch is also significantly taller — it measures 14.35mm thick. This leads to a “stronger” appearance. The new chronograph also feels more robust because there’s just more steel, and instead of Plexiglass, there’s a dome-shaped “box” sapphire crystal with a double-anti-reflective coating. More material, more weight — makes sense to me. 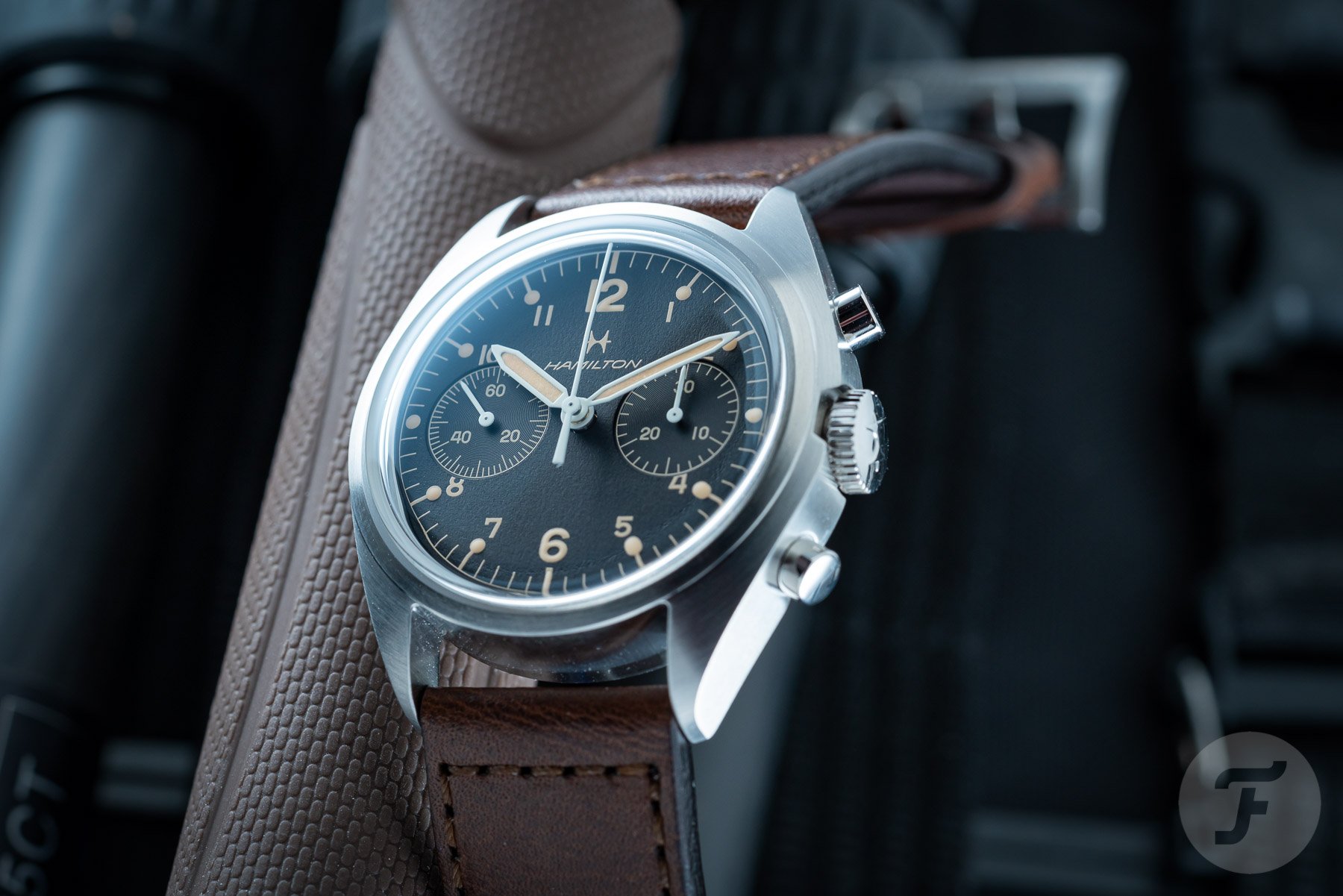 What is still the same though is the asymmetric case shape. I think it’s one of the most attractive features of the watch. The small recess for the thin but rather large crown creates much-needed tension on an otherwise straightforward tool-watch case. 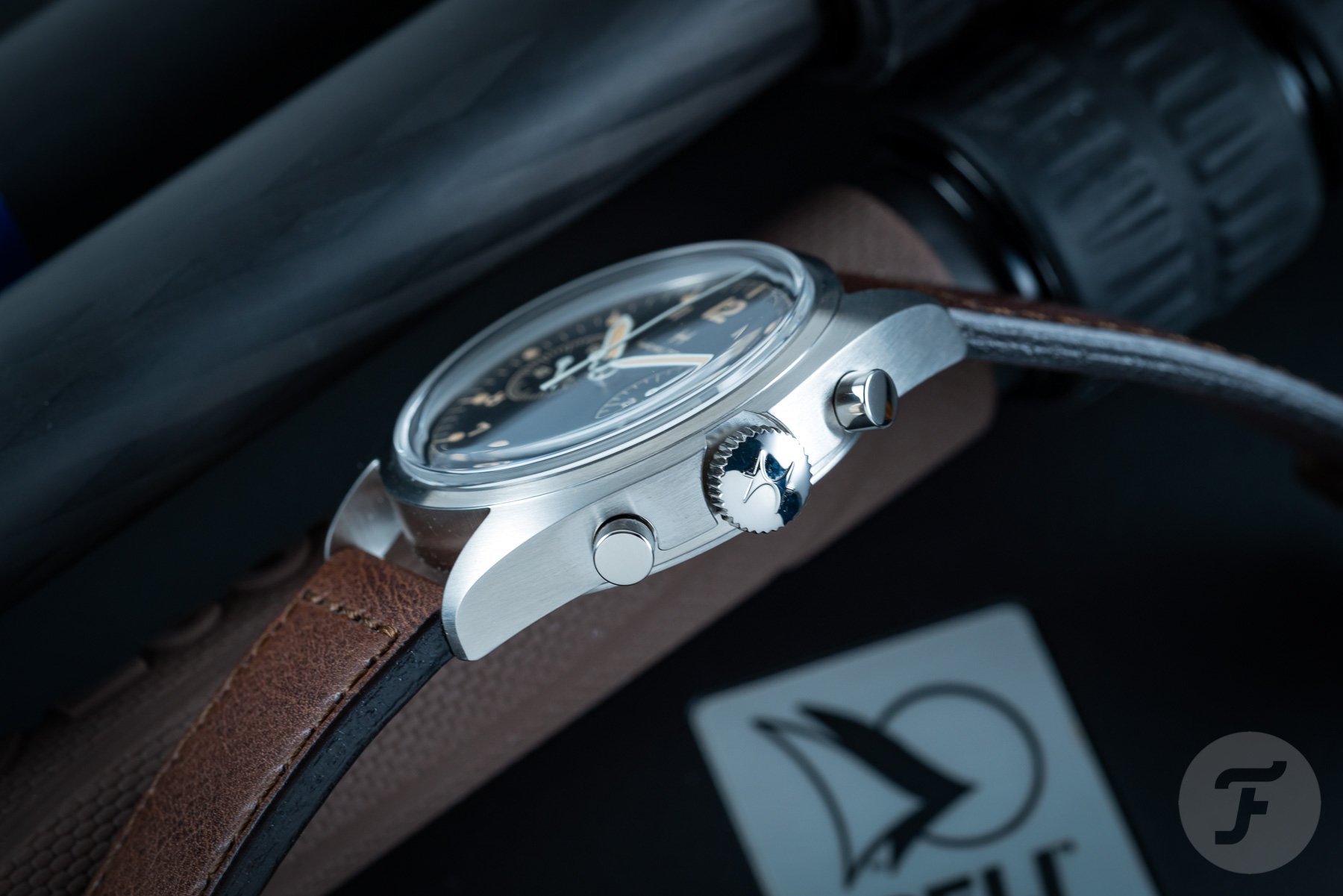 No military markings on the traditional dial

It’s plain to see that the Khaki Pilot Pioneer Mechanical Chronograph celebrates classic military aviation design. But it does so without the military marking on the grained black dial. I have to say that I miss that, and there’s even room for it. Anyway, the two sub-dials, the hands, and the markings stay very, very close to the 1970s chronograph. The hands have a white lacquer coating that’s consistent with the original RAF models. And in popular retro style, there’s also a generous amount of beige Super-LumiNova that mimics aged radium-based lume. 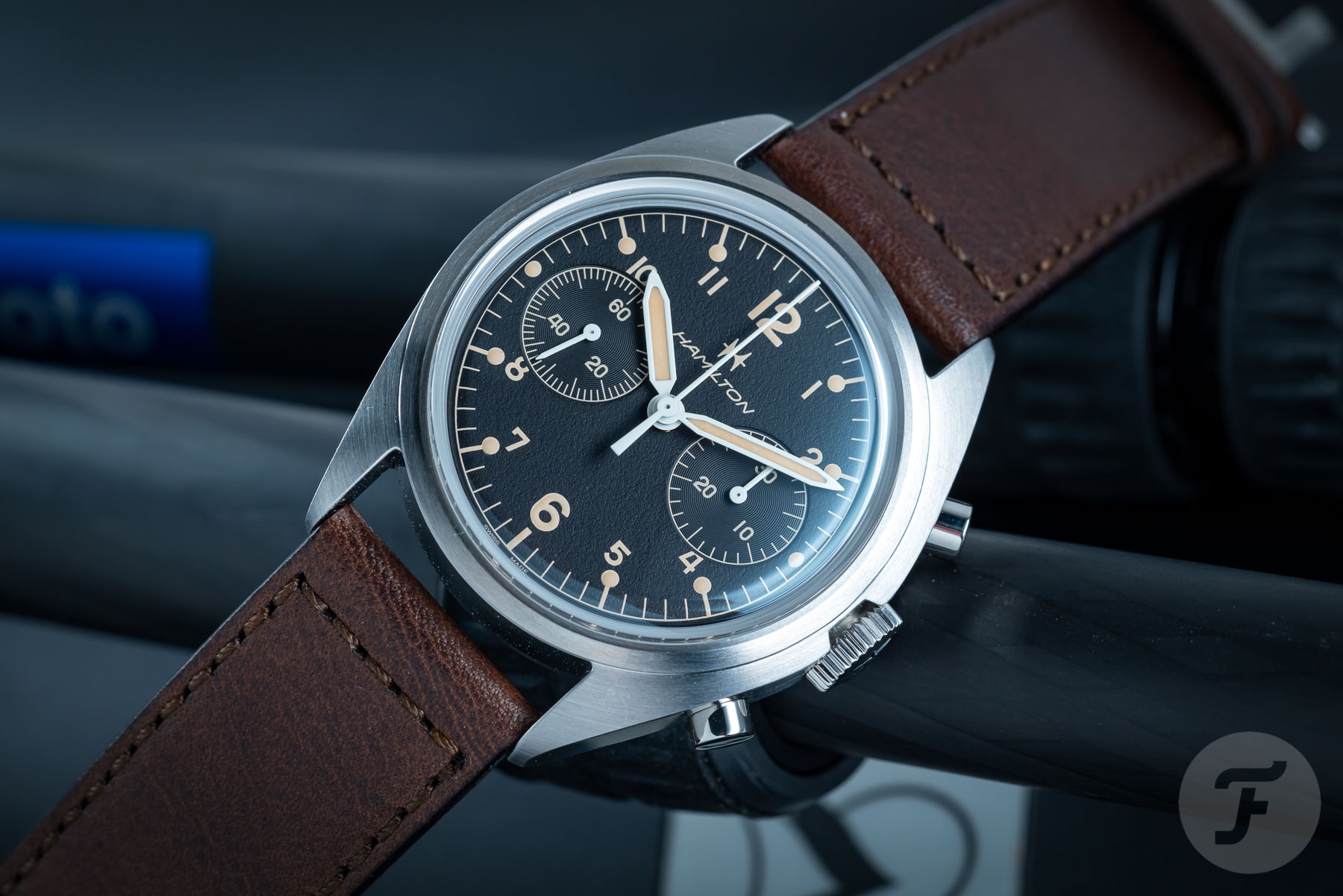 The build quality of the watch, however, is way more modern from the materials used to the movement inside the case. The “engine” inside is the H-51-Si mechanical movement that debuted last year. The hand-winding caliber uses a silicon balance spring and delivers a 60-hour power reserve. 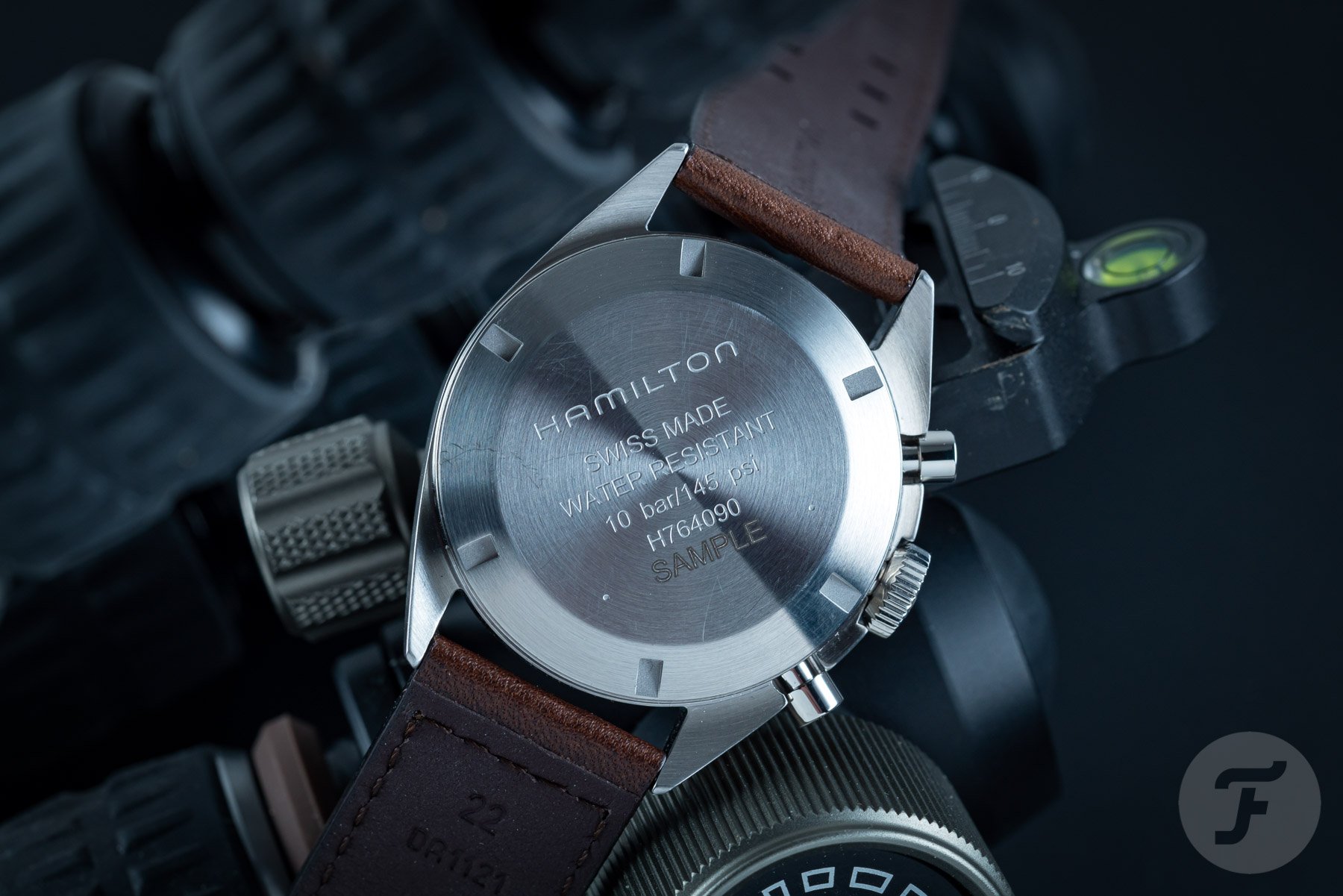 The homage chronograph on the wrist

The Khaki Pilot Pioneer Mechanical Chronograph comes on a leather strap with an H-shaped pin buckle. That double pin is a Hamilton trademark. I know this is a very personal opinion, but I don’t like that pin buckle for two reasons. First, since the buckle needs to accommodate two pins, it has to be quite large — a bit too large for my taste. Second, it reminds me of those wide “manly” leather belts with massive buckles of which I’m not a fan.

The lug width of the watch is 22mm, and that means there’s a lot of leather on the wrist. The lug width/case size ratio is a bit off, but because it’s just a bit, it doesn’t show itself too prominently. Because of its case dimensions and strap, this is a watch that you and others will notice on the wrist. But you don’t want to hide a tool watch anyway because you need to read it regularly while doing your job — flying a Mach 2 fighter jet, for instance. 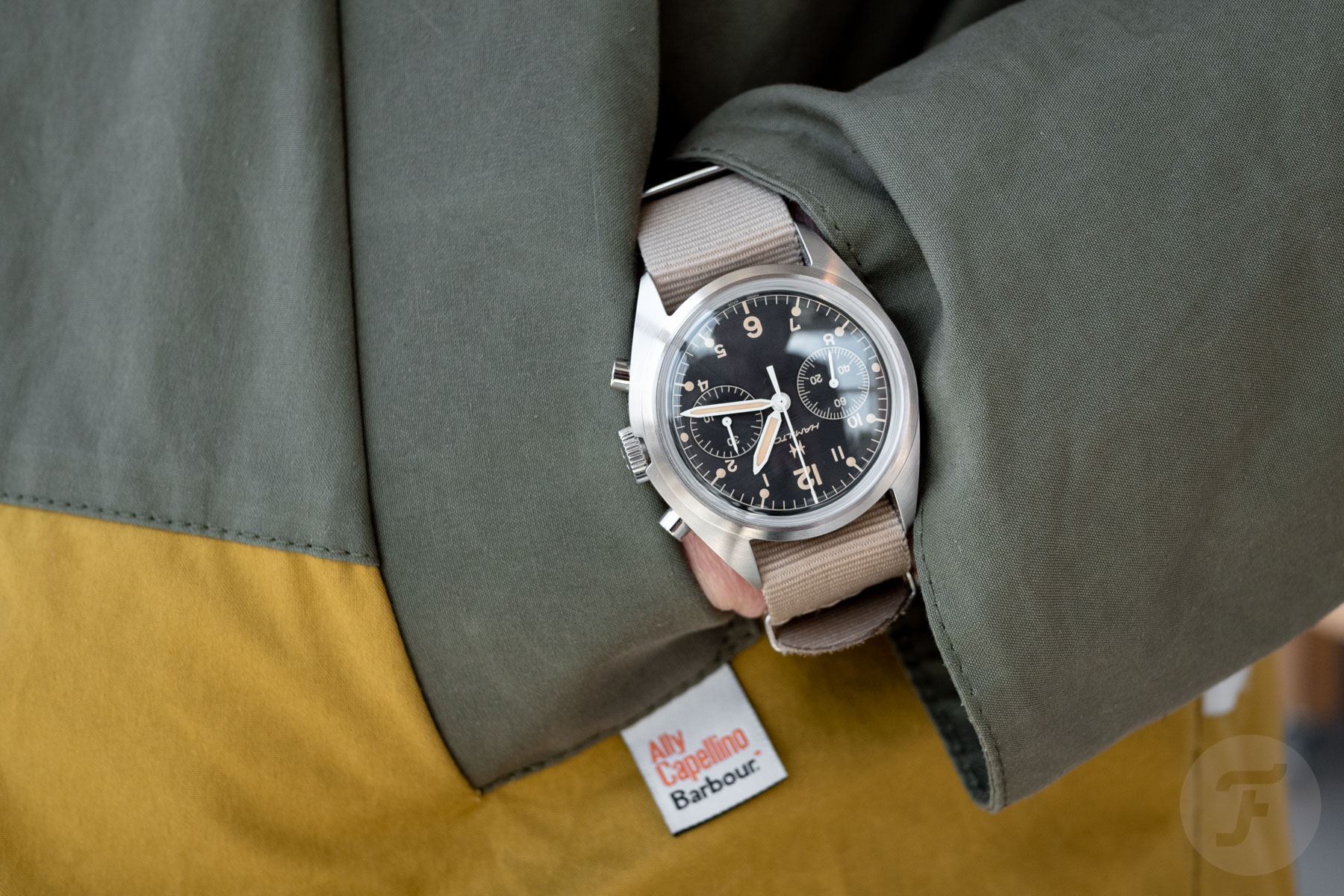 At €1,995, the Khaki Pilot Pioneer Mechanical Chronograph is a great daily-beater chronograph thanks to its price and 100m water-resistance rating. Yes, it’s quite tall, but because there are two positions for the spring bars that hold the strap, you can opt for the lowest position so the watch is not top-heavy. That’s what I found out when I changed the standard leather strap for a sand-colored NATO strap. I just wanted to see how the Khaki would wear with khaki, and it didn’t disappoint. Far from it. In fact, I prefer it on a NATO. It brings out the 1970s RAF pilot vibe even more.