The only manufacture movement that is made in Austria comes from Habring2, the watchmaking company that is lead by Richard and Maria Habring. In 2015 I reviewed the Felix, with its in-house caliber A11B movement. Today I am reviewing the Habring2 Doppel-Felix watch, a rattrapante chronograph with in-house caliber A11RD movement.

Where the Felix was a typical dress watch, beautifully but sober designed with a diameter of 38.5mm, the Habring2 Doppel-Felix is a watch with mechanical complications and much more wrist presence. Let’s have a closer look.

A rattrapante, or doppel chronograph (hence the model name), is a mechanism just like a regular chronograph, but with two second hands for measuring elapsed time. With the extra second hand, you can measure an extra event or a series of events. Both seconds hands will run simultaneously when the start pushers is operated. Push once more and both hands stop. Again and both hands return to zero. Like a normal mono-pusher chronograph. However, on the left side of the case, at 10 o’clock, there’s an extra pusher. Push it while the chronograph is running, and one of the seconds hands stops and – in this case – the gold colored seconds hand will continue to run. Push the left pusher once more and it will catch up with the other seconds hand again. Press it once more and it stops again while the gold one continues. You can either reset them separately or both at the same time, depending on the position of the hands (both running simultaneously means only use of the right sided button, independently and you reset them each with their own pusher). The minute counter is only one hand of course, so the rattrapante only works for the seconds. This is why A. Lange & Söhne for example, came up with the double split and triple split, to also measure extra events in minutes (and hours). 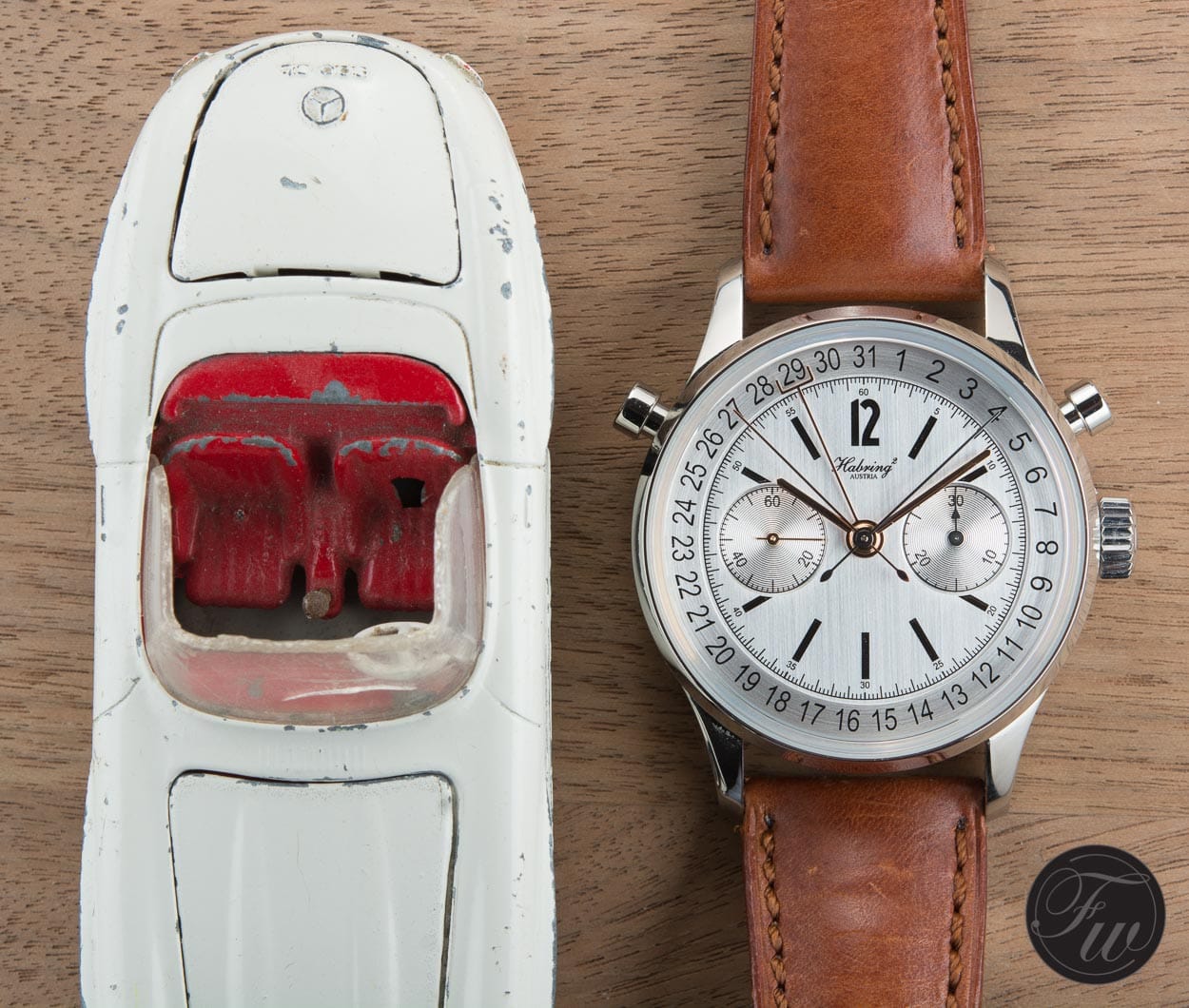 Anyway, besides the rattrapante complication, there’s also a date on the Habring2 Doppel-Felix that I have here. This is optional, as the Doppel-Felix is also offered without. Given the fact that the dial has no less than 7 hands, it can be a bit confusing at first sight as the date indicator is also a hand. So without date there are 6 hands on the dial.

Sure, a rattrapante chronograph is a wonderful complication, but Habring2 also put a lot of effort in the design of the watch. Habring2 used a very classic looking round 42mm case with pump pushers on both sides, a large winding crown and a small date-corrector at 4 o’clock. The case is nicely finished, with a brushed center piece and polished on top (bezel and lugs). A very playful combination under certain angles. The bezel is very thin, leaving a lot of room for a large dial. A lot of information is given on the dial, so it is important that there’s enough space. The outer part is a date disc, so from 1 to 31 and a gold colored hand to indicate the correct date. Instead of a ‘croissant’, Habring2 uses a rectangular shaped indicator to ‘frame’ the date. Then, a center dial (which is a bit lowered) for the minute and hour track. Two sub dials, both with circular finish, for the running seconds and the chronograph minute counter. As you can see, the Arabic ’12’ and the hour indexes are gold/beige color in certain light. These perfectly match with the gold colored hands. One of the chronograph seconds hand is black as well as the minute recorder at 3 o’clock. The center dial is made of silver galvanized metal, and has a brushed finish. To me, this is one of the main attractions of this Habring2 Doppel-Felix. It looks amazing and fits the rest of the design perfectly. 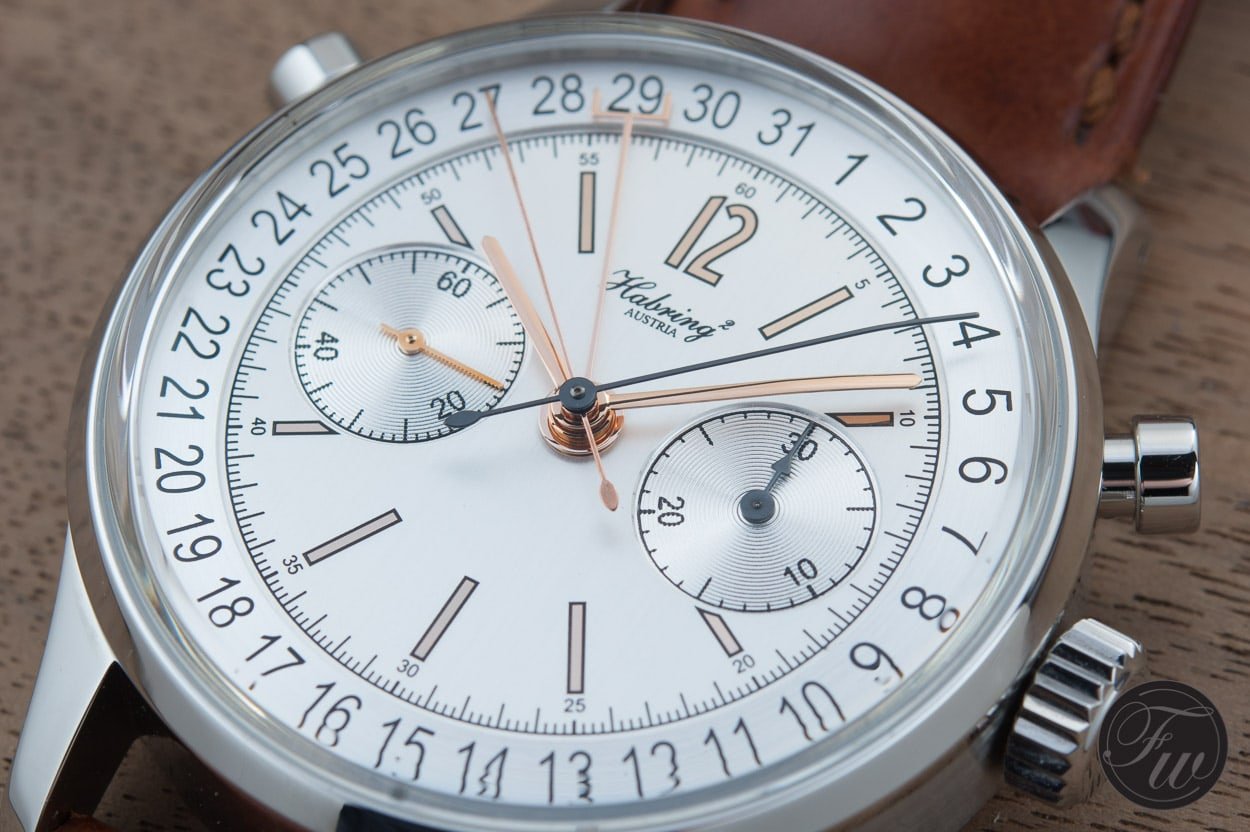 Just like the other 42mm watch I reviewed this week, this watch has quite a thick case (12.5mm +the domed sapphire). Although 42mm is a relatively modest size, the thickness of this watch give it quite some visual presence. The rattrapante complication does need some space of course, so I am not surprised. The Habring2 Doppel-Felix comes with a beautiful and high-quality brown calf leather strap, on a deployant clasp.  Lug to lug, this watch measures 53mm and the space between the lugs is 22mm. It might also look very cool with a nice leather NATO strap in 22mm. Just an idea. 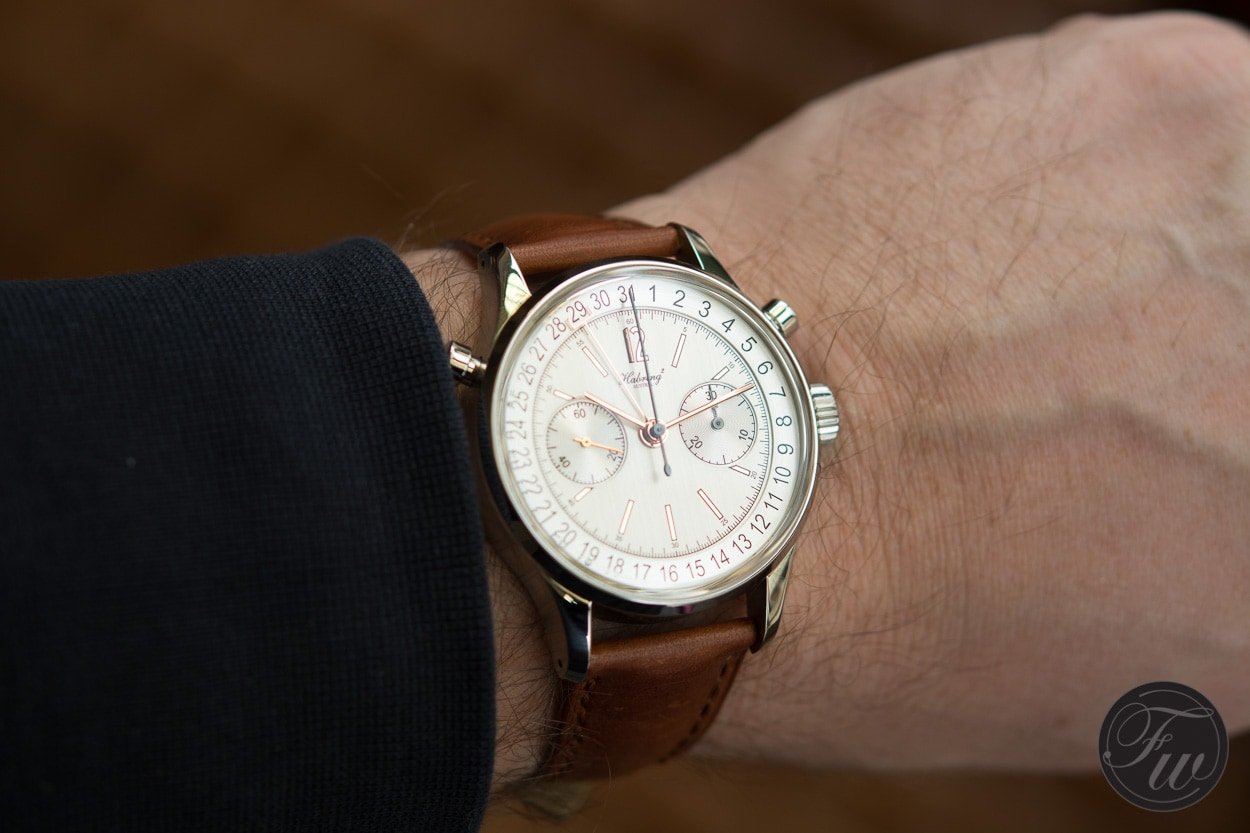 The crown is easy to grasp, so winding is very easy. The crown is not signed, but looks good and has the right size to fit the case. Although I am not a fan of winding a watch while it is on the wrist, it can easily be done with this one without having to put ‘force’ on the crown. The Habring2 Doppel-Felix caliber A11RD movement has 48-hours of power reserve. So you need to wind it every other day to be safe. 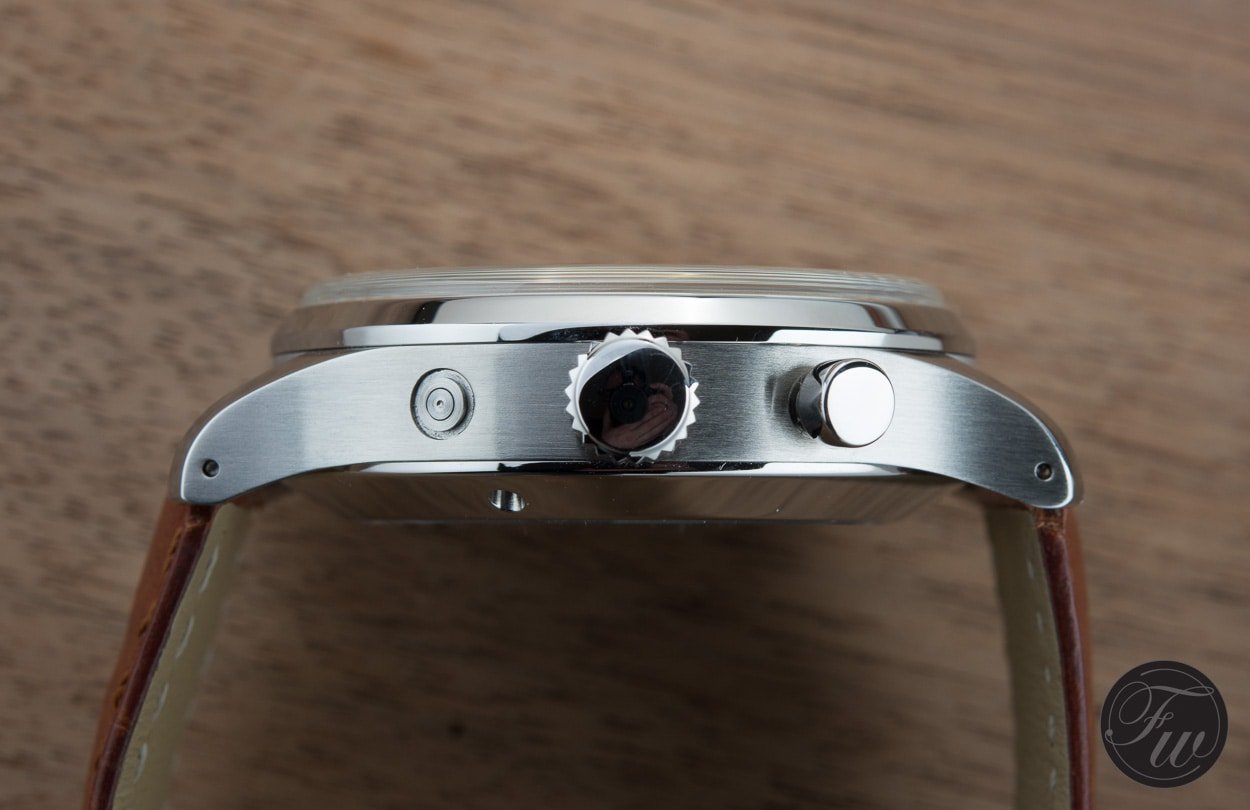 Closing and releasing the clasp is done without pushers, just use the right amount of force and you’ll be fine. Resizing the strap is very easy and you don’t need a screwdriver or any other tool. Just flip open the buckle and you can push or pull the leather strap to the next hole. 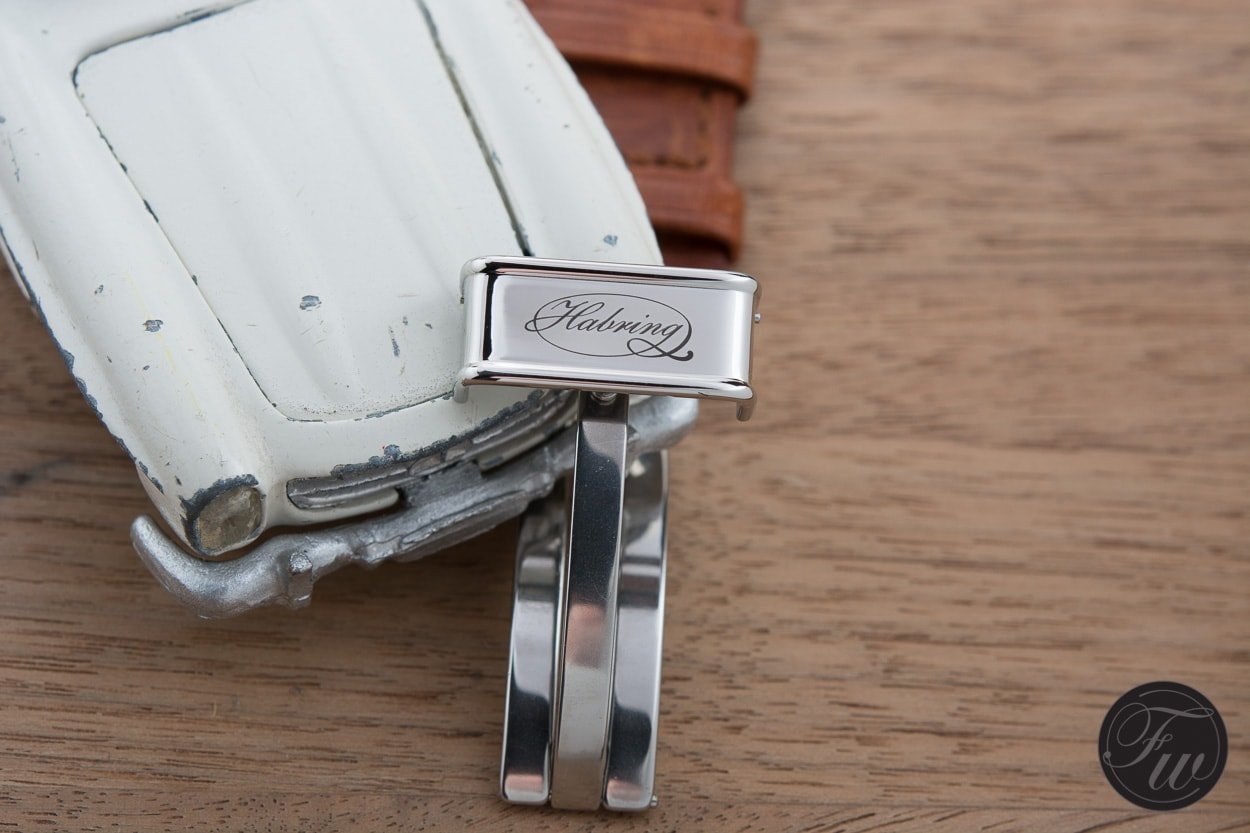 The back side of the Habring2 Doppel-Felix reveals its in-house developed and produced movement. Habring2 is the only one to do so in Austria. This chronograph movement, caliber A11RD is based on the A11B that was also used in the Felix. In the watch I have here today, it is the A11RD, where the D stands for Date. There’s also a Habring2 Doppel-Felix with A11R movement, that has a tachymeter scale instead of a date indicator. 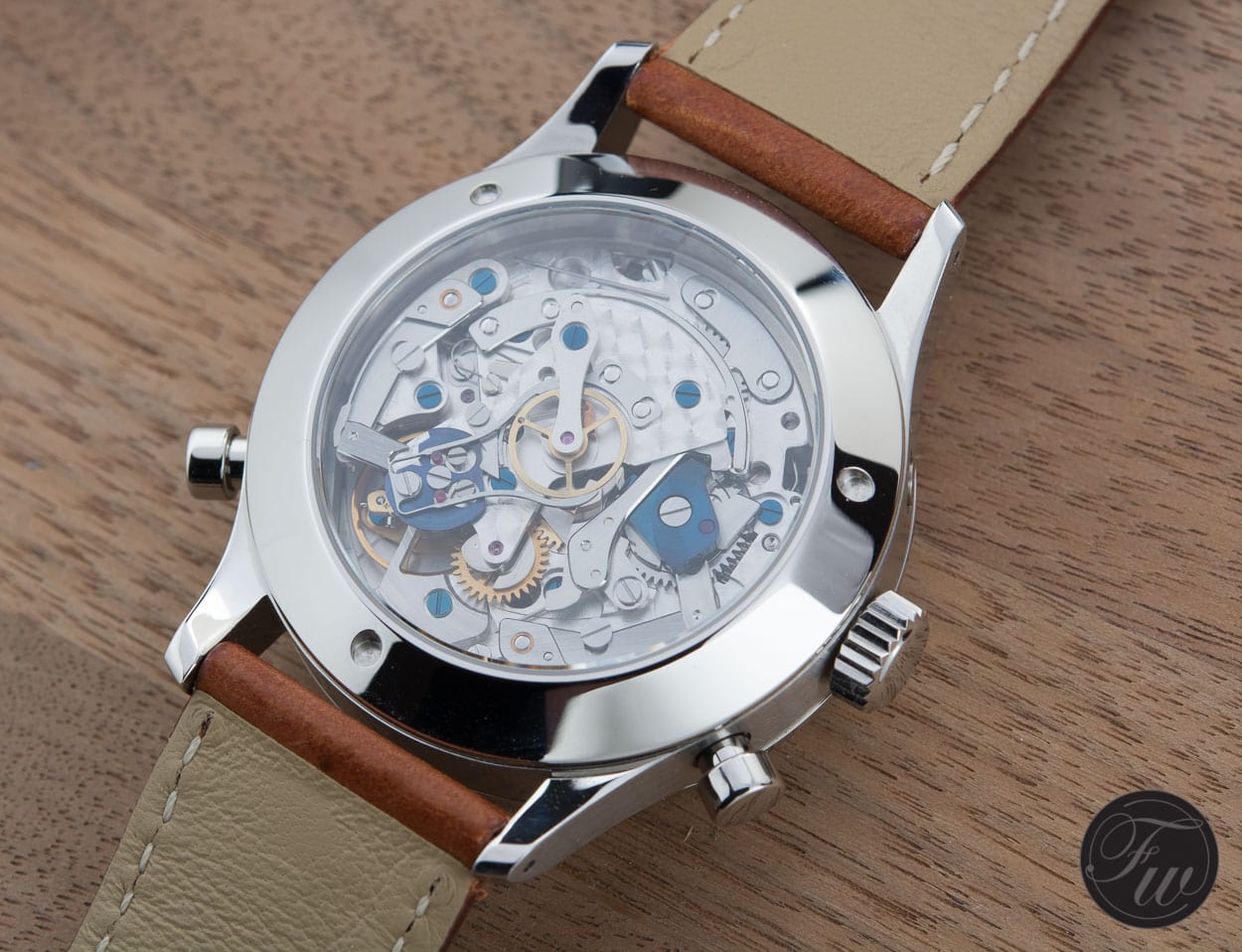 As you can see, a manual wound movement with blued screws and other parts, perlage finishing and quite some ‘depth’ by the layers that this movement uses. It is very pleasing for the eyes. According to Habring2 the escapement is made in ‘chronometer quality’ and the movement has a shock proof system according to the appropriate DIN standards. Interesting enough, Habring2 decided not to bring you any irrelevant information engraved on the bezel of the case back. Hooray! The screw-down case back also ensures a bit of water resistance of course (3ATM).

During my time with the watch, it kept perfect time as far as I could judge. I rotate watches quite a bit, but made sure this watch got plenty of wear. It is an easy watch to wear, meaning that it fits a lot of different outfits but also different occasions. Where the Habring2 Felix was a bit more conventional, perhaps a bit too classic for some, this Doppel-Felix is certainly also fit to wear it with a t-shirt, shorts and sneakers during the summer. At least in my opinion, but my sartorial standards are pretty low. 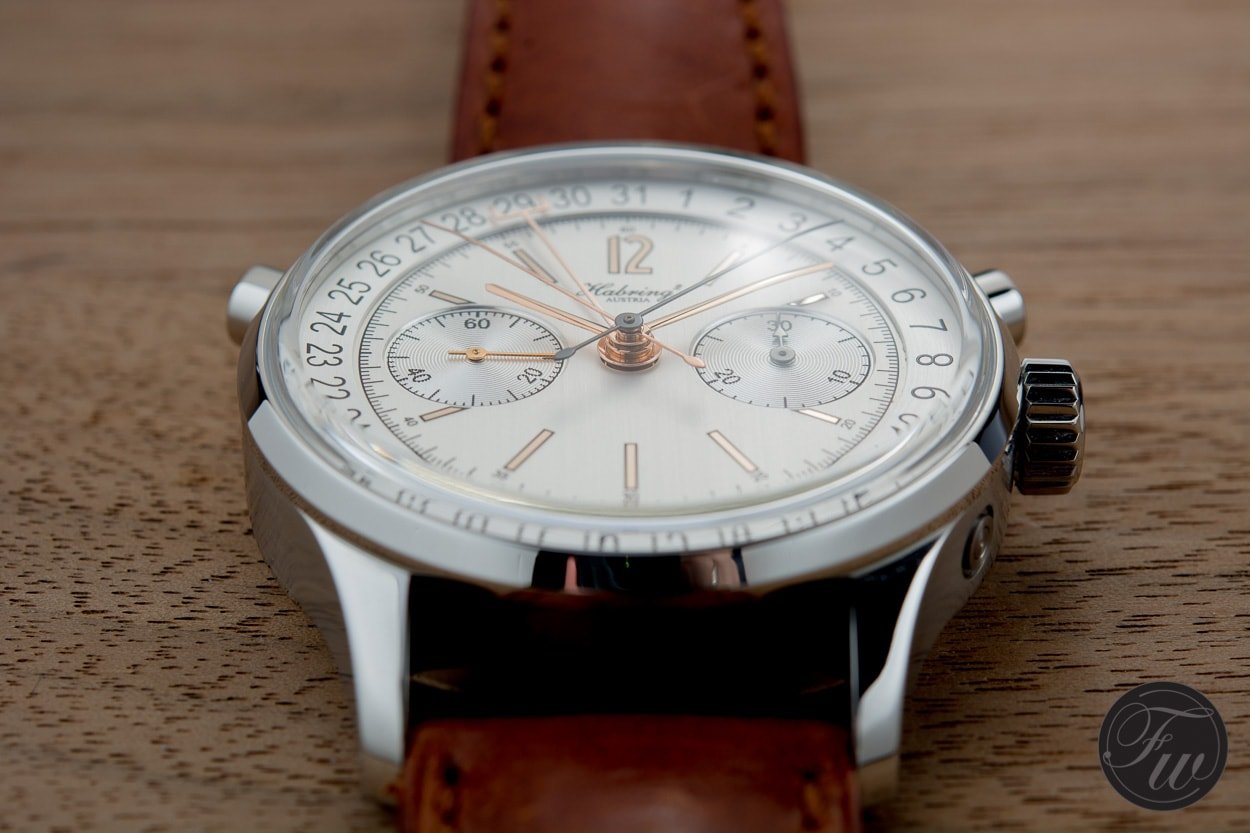 The Habring2 Doppel-Felix is available in four different versions. Two different dials, like this silver dial I have here and then there’s a (dark) grey dial version. For each dial version, you are able to make a choice between having a date function (being the caliber A11RD) or the one with the tachymeter scale (caliber A11R). To be brutally honest with you, I think I might prefer the tachymeter scale version. I can live without a date (my iPhone has one to show me) and I think it would prevent me from becoming confused by the number of rose gold hands. Either way, it is a very interesting and beautifully designed watch, with solid Austrian roots. The no date version retails for €7750 and the date version retails for €8250. Those prices open up a wide range of options with a lot of different brands on the market, but €7750 for an in-house developed and produced rattrapante with the level of finishing (on dial, case and movement) like this Habring2 Doppel-Felix is an quite interesting offer.

The Doppel-Felix is a very impressive watch and if you’re into buying from independent watchmakers, certainly one to consider.

Habring² won the “Petite Aiguille” prize with their Doppel-Felix.