Many, if not most, current watch models at Omega are developments based on designs of the past. The Seamaster, Speedmaster, Constellation, and De Ville have all been around for decades. But while most of these product lines were born in the 1950s and ’60s, Omega produced wristwatches long before then. The new Omega CK 859 pays respect to the early days, taking its inspiration from a classic Omega model that debuted in the late 1930s.

The original CK 859 was powered by a series of different calibers during its lifespan. Most importantly, it was the model to debut the then-newly developed caliber 30 T2. This manual-winding caliber with a small seconds hand later proved to be one of the brand’s most important and famous movements. Several versions were produced, of which the second one (T2) remains legendary to this date. The 30, by the way, indicates the diameter of the caliber in millimeters. 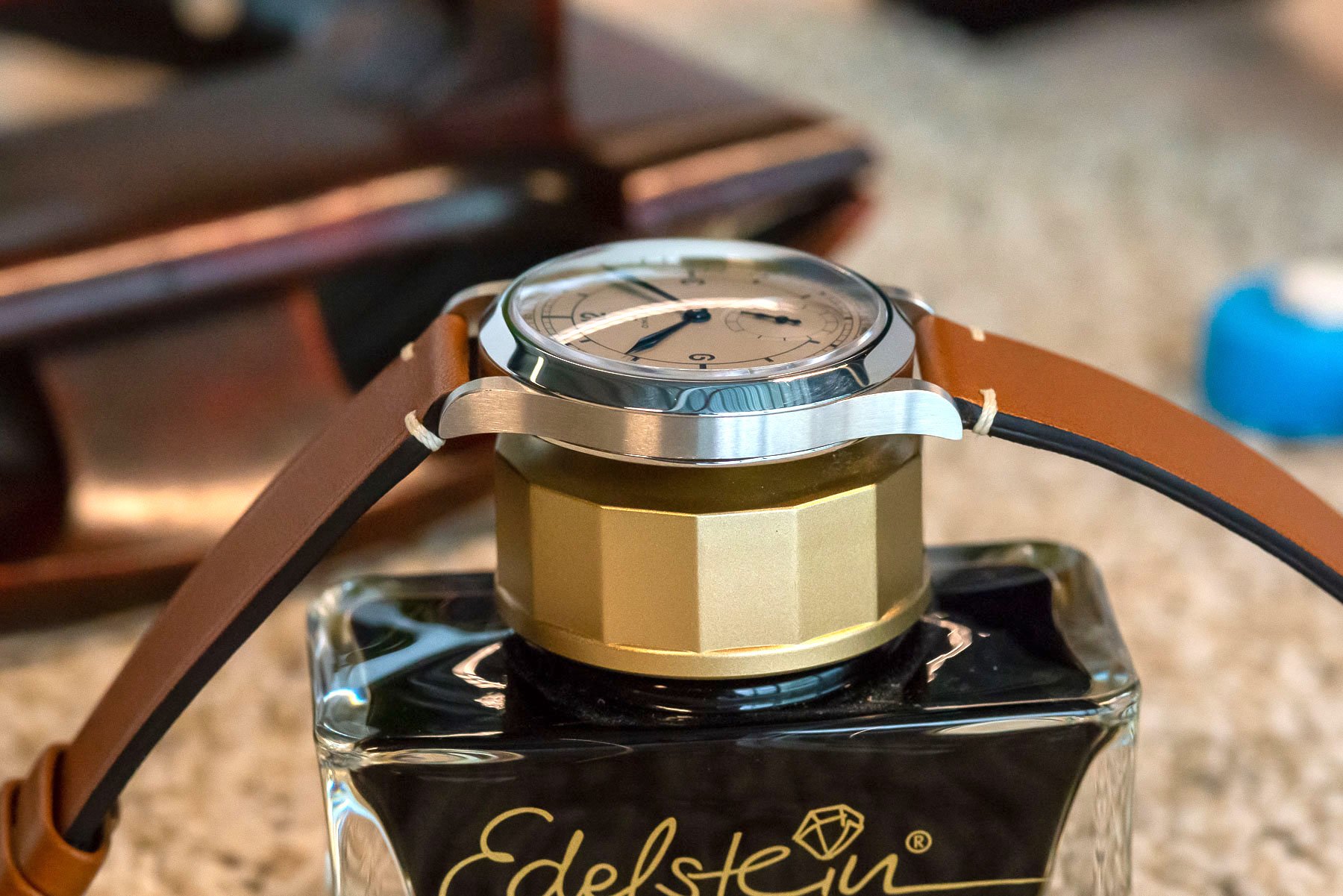 The 30 T2 calibers formed the backbone of Omega’s successes in the chronometric competitions from 1940 to 1966. The 30mm calibers developed exclusively for the observatory competitions featured new technologies that were subsequently used in the publicly available 30mm calibers. As such, the CK 859 with the 30 T2 was more or less used as a laboratory by Omega and therefore was important for the company’s growth. It makes it easy to see why Omega chose the CK 859 to pay respect to this era. 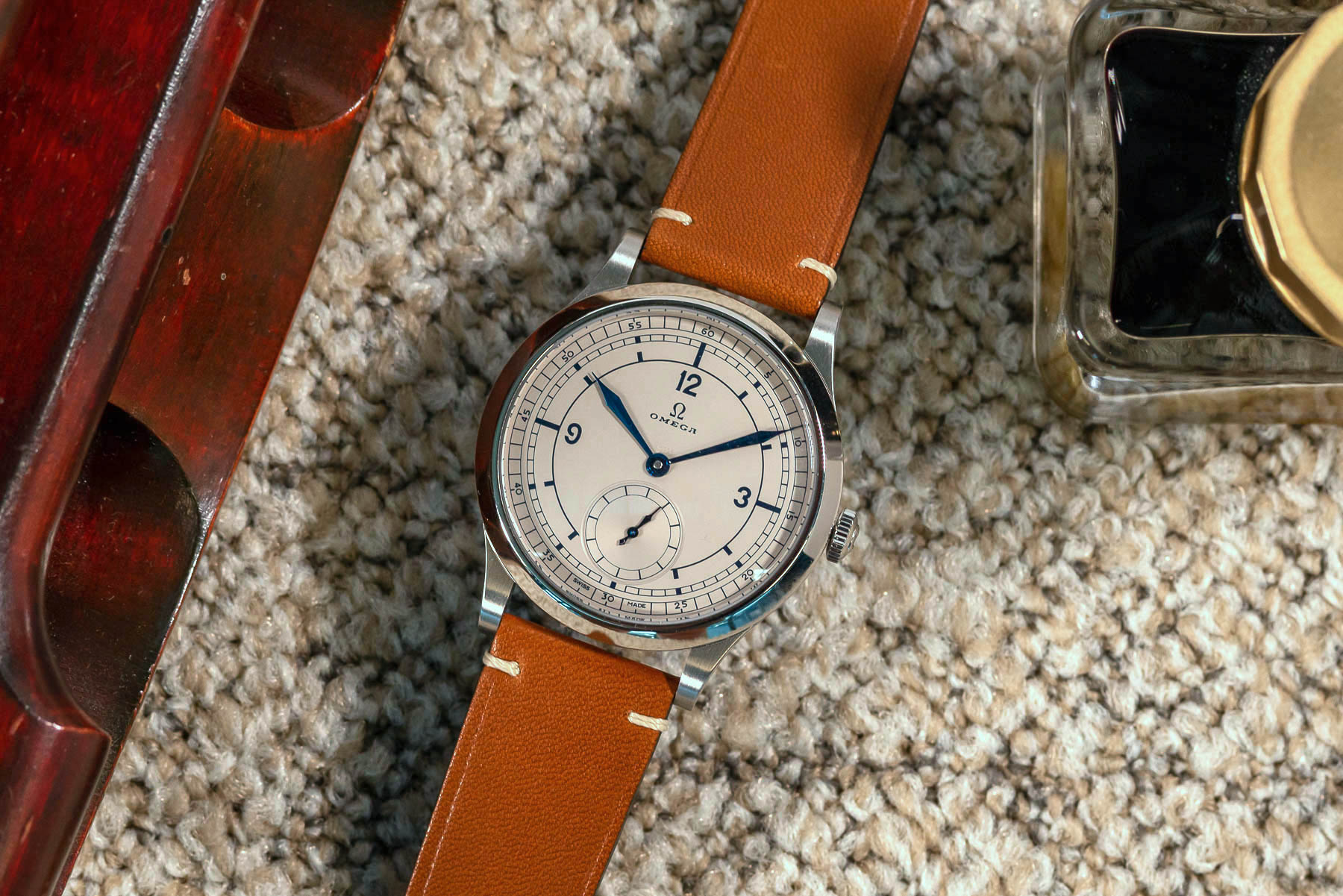 But it couldn’t have been the importance of the 30 T2 movements alone. I’m sure Omega choose the CK 859 for its attractive sector dial as well. And Omega honored this dial in a great way. The new CK 859 sports a dial made of solid sterling silver, giving it a perfect surface appearance. 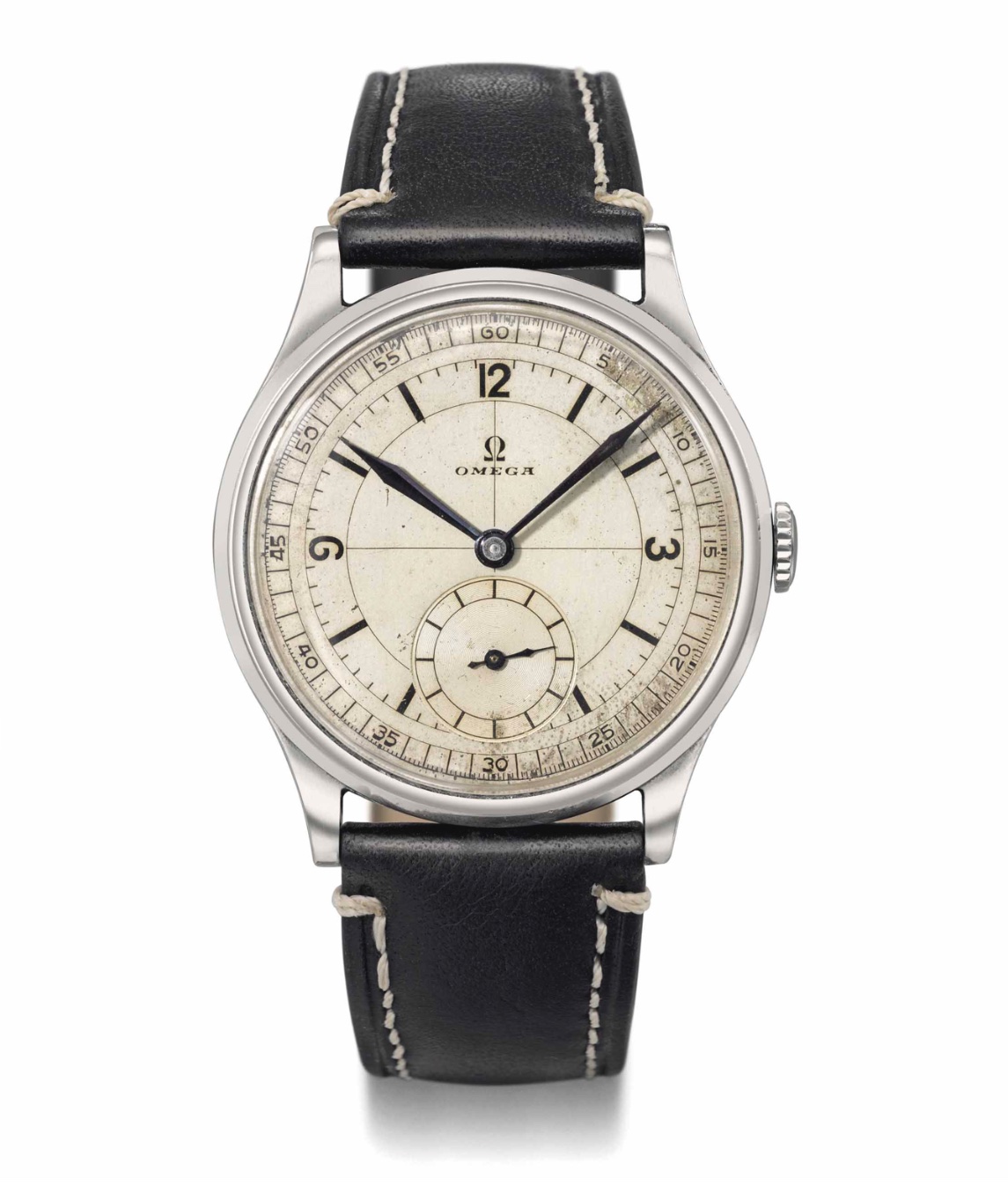 A sector dial often has two or more concentric circles divided by radial lines. A crosshair is common on a sector dial but not necessary. As you can see, the original CK 859 dial had a crosshair, while the modern version does not. Sector dials were hot in the 1930s, with Omega and Longines leading the trend. Other brands wasted no time in following suit. Nowadays, most classic brands — Longines, Patek Philippe, and Jaeger-LeCoultre, among others — have, or recently had, historically inspired watches with sector dials in their catalogs. 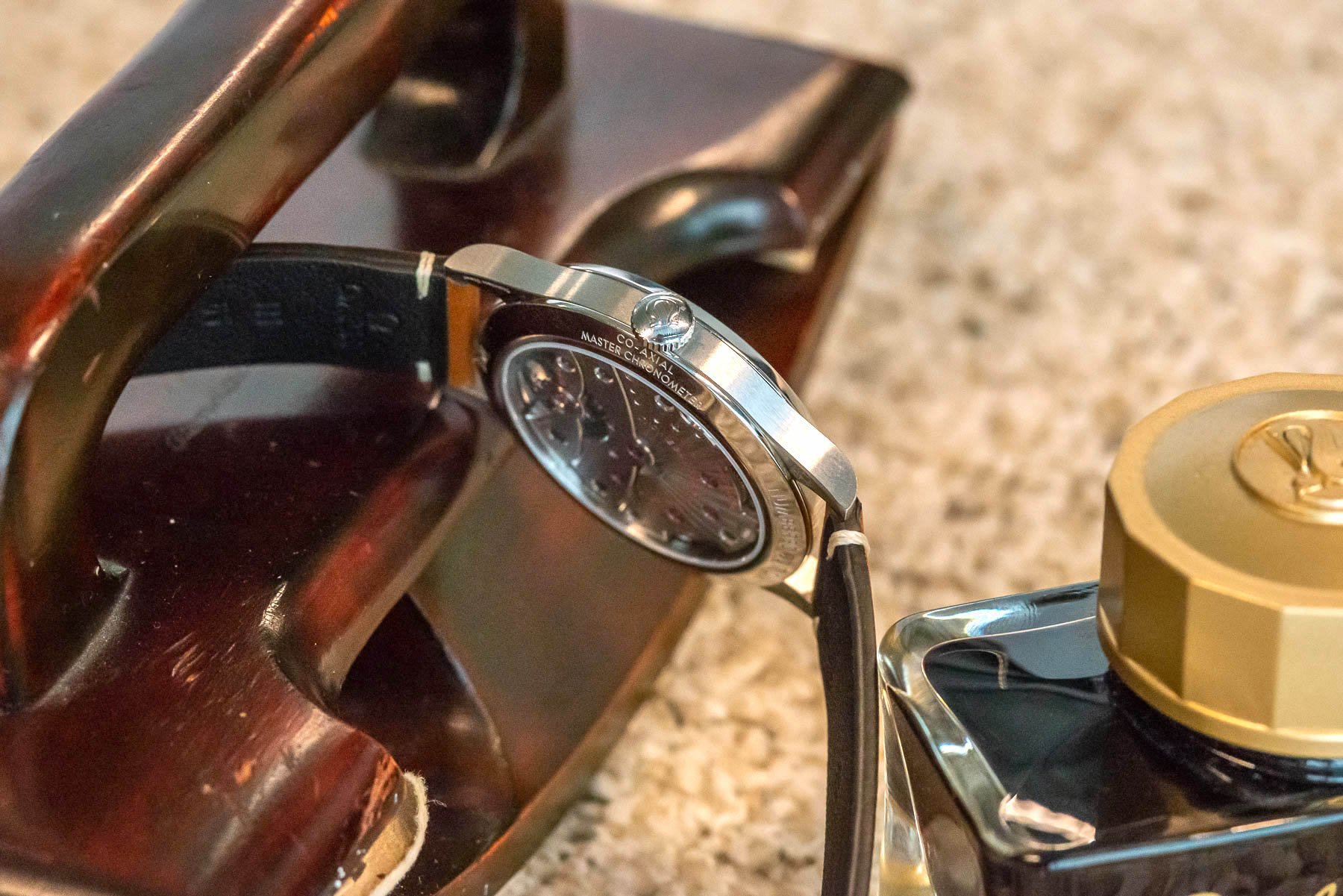 The refreshed CK 859 has a brushed stainless steel case with a polished bezel. And I want to mention the sterling silver dial with its small seconds sub-dial at 6 o’clock once again. Looking at the original dial, the 12, 3, and 9 numerals were radially printed. Not so with the new CK 859. This time, Omega decided to keep all numbers straight up, moving them inward from the hour markers. The dial is protected by a domed sapphire crystal with an anti-reflective coating on both sides. All hands are polished and blued.

Back to the case. Compared to the CK 859 from the 1930s, it grew approximately 1.5mm. The original case had a diameter of 37.5mm. Consequently, the current version comes in at 39mm. It also measures 11.7mm in thickness and 46.2mm from lug to lug. A polished case back with a large sapphire glass unveils Omega’s hand-winding Co-Axial Master Chronometer caliber 8926. 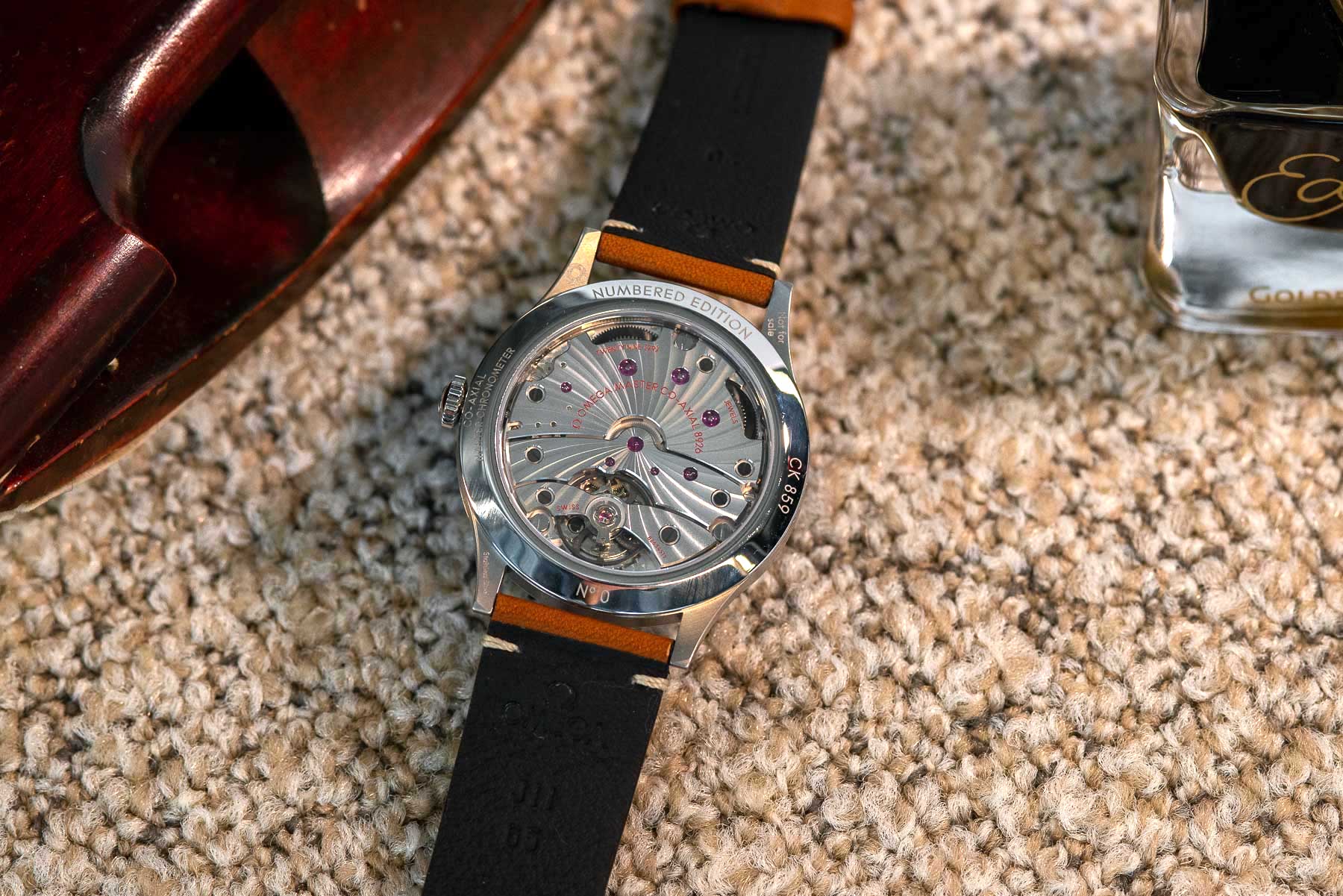 The fact that caliber 8926 is manual-winding and sports small seconds at 6 o’clock makes it adequate for this historically inspired watch. Like all Master Chronometer Omega calibers, the 8926 is certified by METAS. It ensures, among other specifications, that the movement offers a daily accuracy between 0 to +5 seconds and is resistant to magnetic fields up to 1.5 Tesla (15,000 gauss). Caliber 8926 houses a free-sprung balance with a silicon balance spring and uses two barrels mounted in series. Fully wound, this modern movement provides 72 hours of power reserve. Lastly, it is rhodium plated and decorated with arabesque Geneva stripes. 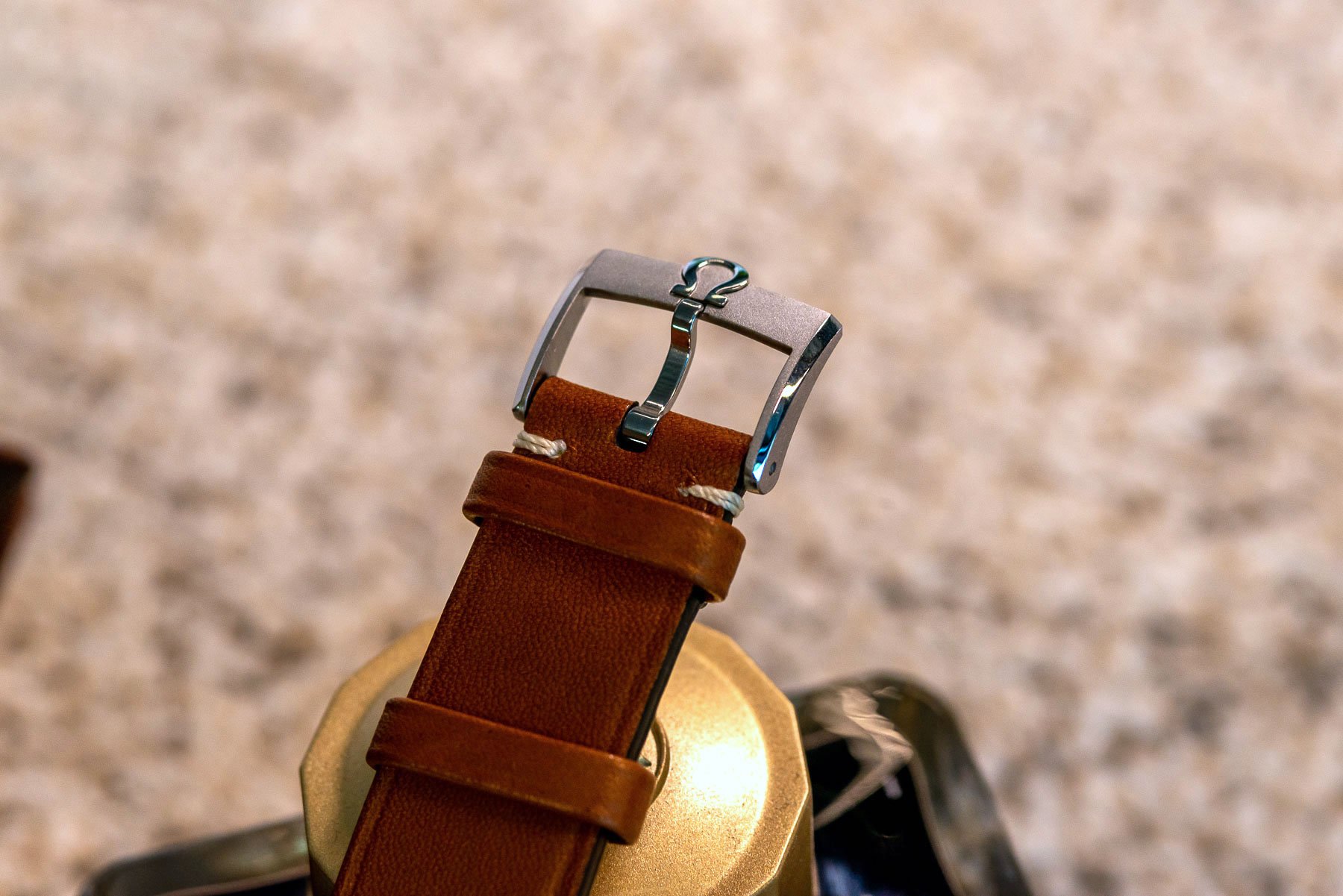 I’d be remiss not to mention the soft leather strap and stainless steel pin buckle. The strap is very comfortable and it perfectly fits the watch’s vintage image. Speaking of that vintage image, the buckle is crowned with an applied, period-correct vintage Omega logo. The same historic logo, by the way, is engraved on the crown and printed on the dial. 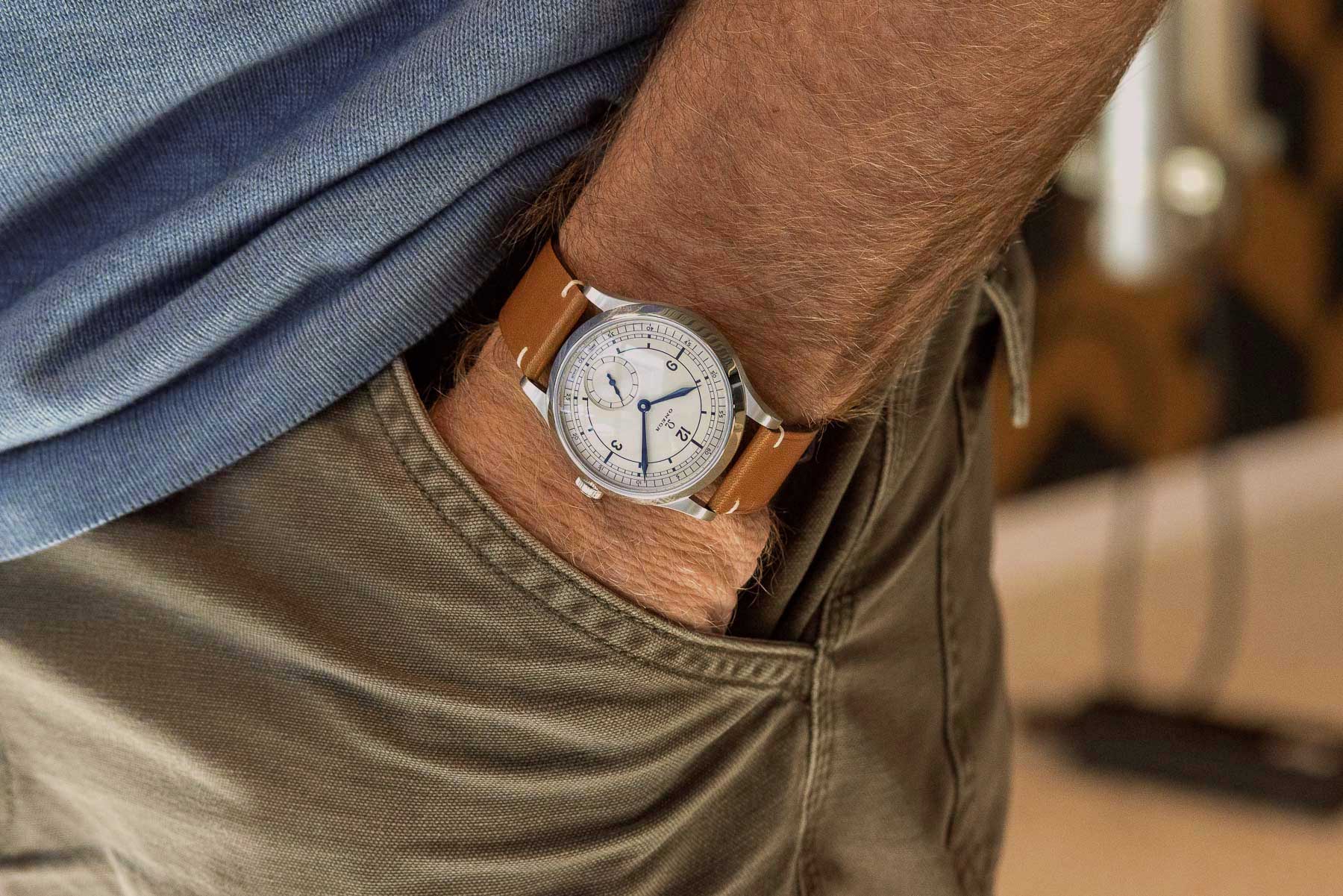 Omega’s new CK 859 is easy on the eyes. I can imagine that it’s a watch that many people like; what’s not to like? We’ve seen this before with sector-dialed, vintage-inspired watches recently presented by, for example, Jaeger-LeCoultre and Longines. They were also very popular with a large audience. Therefore, I like that Omega didn’t make the new CK 859 a limited edition. Instead, Omega decided to make it an ongoing numbered edition to maintain the exclusivity of a unique number.

On paper, the 39mm size might seem large for a watch like this. In real life, however, the watch is very balanced both in its appearance and the way that it wears. I like the combination of a vintage-inspired model and an ultra-modern caliber. Still, while meeting (or even exceeding) today’s standards, it has the right vintage vibes being manual-winding and sporting a small seconds hand.

Having been silently introduced in March of 2022, the CK 859 seems to be carefully hidden on Omega’s website. As it’s not part of any Omega family — i.e. Constellation, Speedmaster, Seamaster, etc. — it won’t show up while browsing these. Entering “CK 859′” in the search field, however, will take you swiftly to the CK 859’s webpage. The official and complete reference for the watch is 511.12.39.21.99.002, but I can imagine that you quickly want to forget that. Finally, I shouldn’t forget to mention the price, which is €6,800 including VAT.

Update: Omega let us know that this watch has been discontinued. The production was (time) limited on the steel version. The gold version can still be ordered/bought at Omega boutiques.

Do you think this sector dial will speak to the watch-buying masses? Let us know how you feel about this model in the comments!

Hot Topics
Introducing: The Omega Speedmaster Super Racing With Spirate System
149 comments
Design Vs. Specs — Which Is More Important To You When Buying A Watch?
85 comments
The Updated Bracelet For The Omega Speedmaster Professional 3861 — Here Is What’s New!
51 comments
The Time To Buy Is Now: How The Current Economic Climate Influences Watch Buying And How You Should React
49 comments
Introducing: The New Cartier Tank Française
49 comments
Popular
Top 10 Rolex Watches – Overview of Models Favoured By Our Readers
Fratello
25
Rolex GMT-Master History And Overview Of All Major References
Robert-Jan Broer
21
#TBT A Vintage Seiko Buyer’s Guide to Affordable Goodness
Michael Stockton
32