Hands-On Review: The Tissot PRX Has Convinced Me

Possibly the most exciting and affordable integrated bracelet model out there today.
Balazs Ferenczi
comments 41
Share

The first time I saw the Tissot PRX, I was ambivalent. It looked exciting on the renderings, but the quartz movement was a turnoff. Since then, I managed to snag one for a few weeks, and my feelings have changed.

I enjoyed wearing the watch, and the fact that it is quartz did not bother me at all. Furthermore, if you wished the PRX was a mechanical watch, don’t worry, we have good news for you too. Keep on reading… 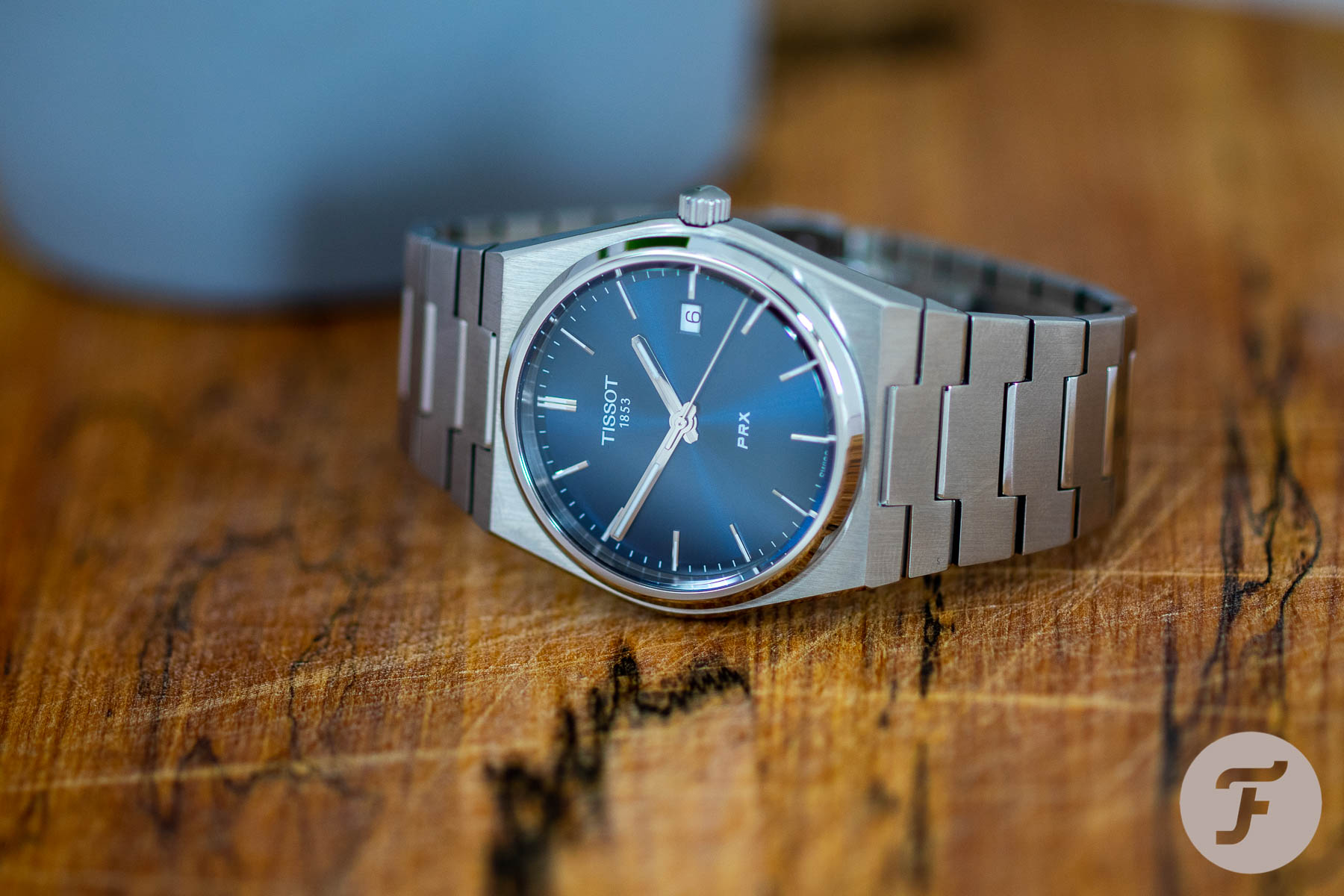 The new Tissot PRX’s design takes inspiration from a 1970s Seastar model. Just like the modern counterpart, that watch was also available in several dial variants. Unlike the new PRX, however, the Seastar also came in a few different cases. The ’70s was the golden age of odd-shaped watches with integrated bracelets. Just think of the two legends of the era, the Audemars Piguet Royal Oak from 1972 and the Patek Philippe Nautilus from 1976. Besides, it is virtually impossible to find a mainstream brand from that period that, one way or another, didn’t have an integrated bracelet model in its lineup. 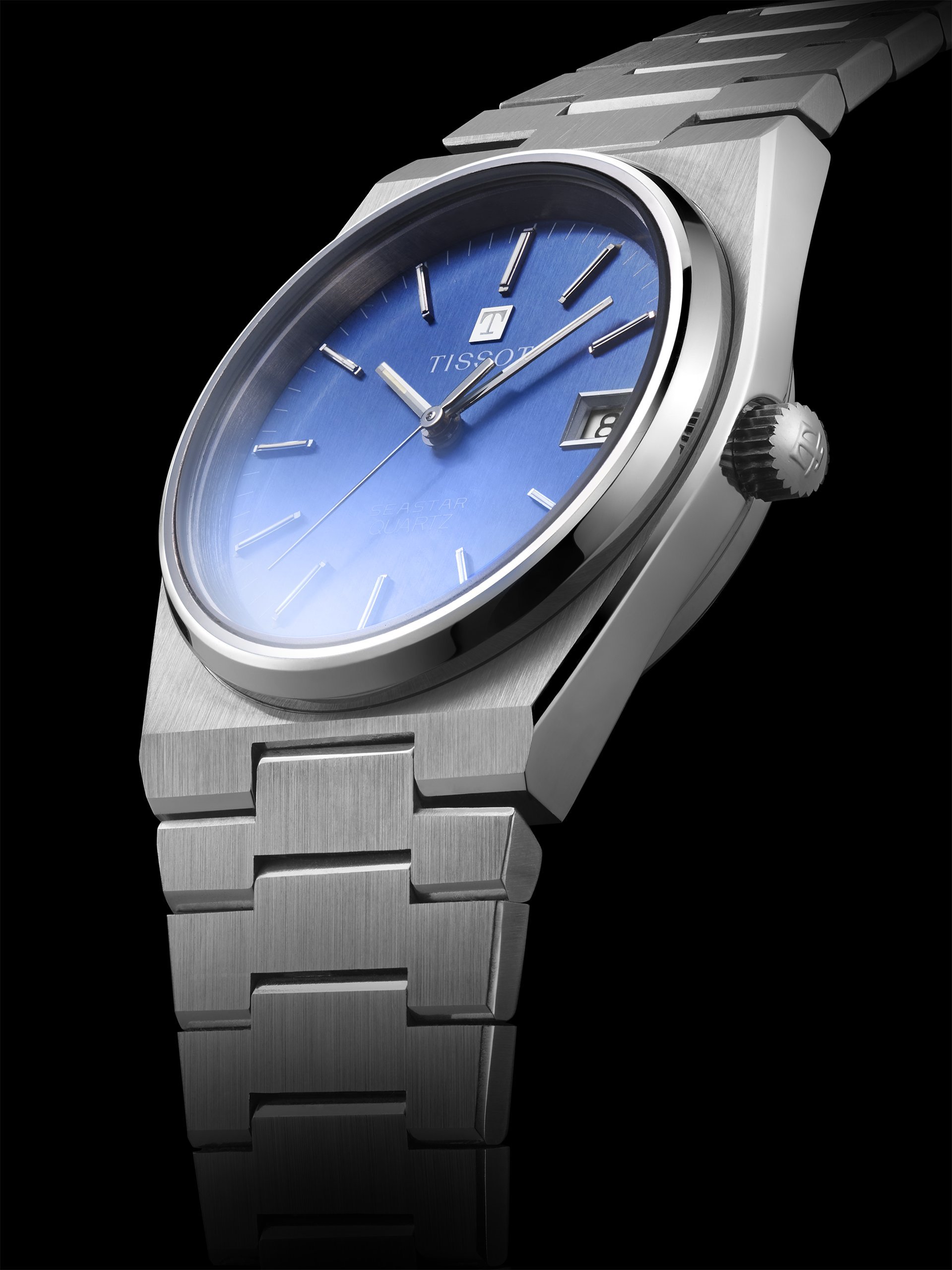 The original Tissot Seastar from the 1970s

Although quartz already made production cheaper, other components like the dial or the case were still made of relatively sturdy materials paying attention to the smaller details. The overall design suggested that the watch head and the bracelet should be considered as one unified entity.

While the Tissot Seastar Quartz was not among the most influential timepieces, it did not look any less electrifying than other, more regarded integrated bracelet models. While watches like the Nautilus, the Royal Oak, or the Ingenieur became the norm for luxury (ok, maybe not the Ingenieur), the PRX does not look out of place at all. 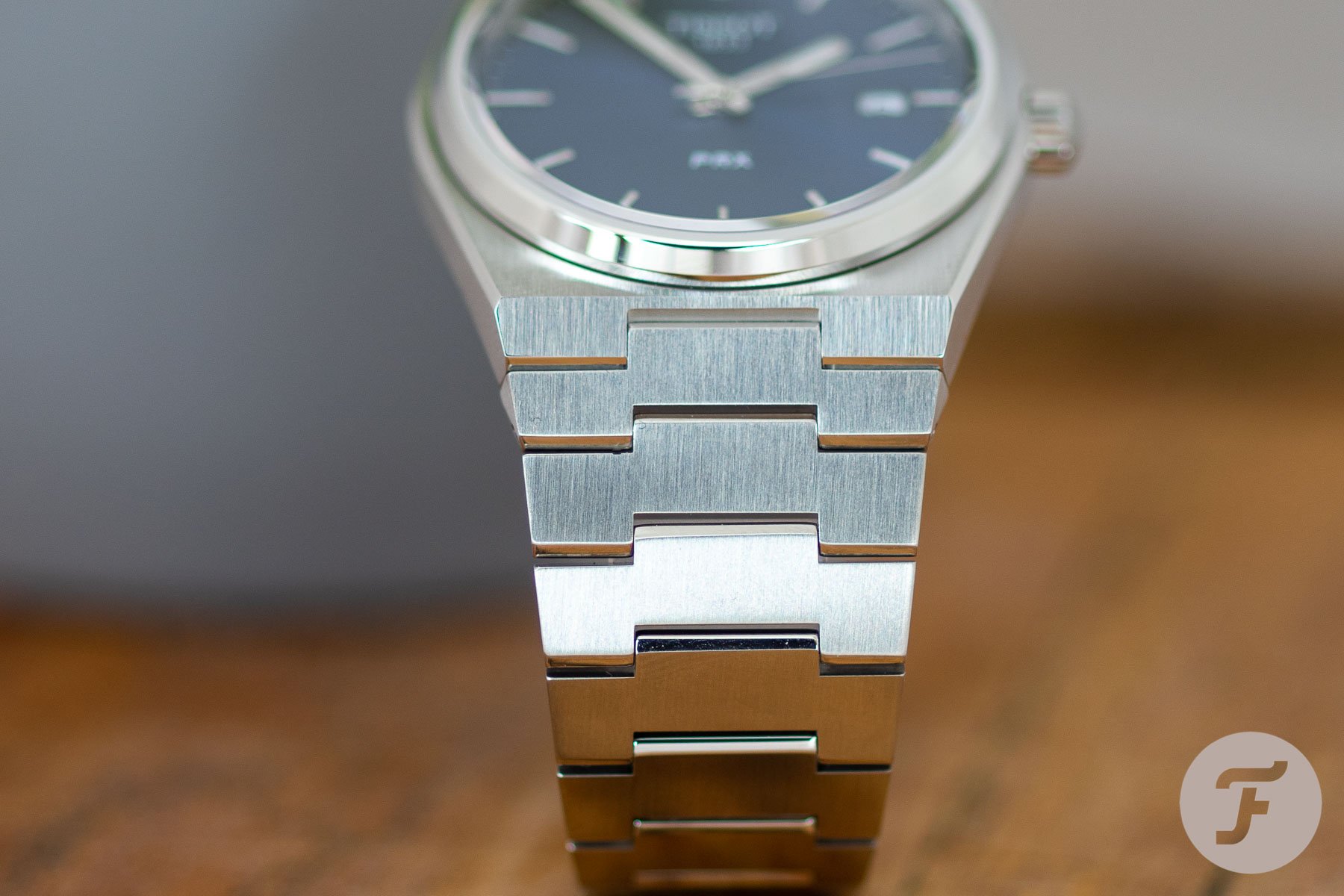 On the contrary, it works surprisingly well and NOT because it reminds us of the models mentioned above. It does not look like them at all. Secondly, its size and dial also feed into the contemporary feel. Lastly, the complete case and, specifically, bracelet finishing is exceptionally well-executed, especially if we consider the €350 price tag.

I received the blue sunburst dial version, which is my favorite of the three. Still, if you fancy a different color, the PRX is available with a black or silver-gray dial in a steel case. 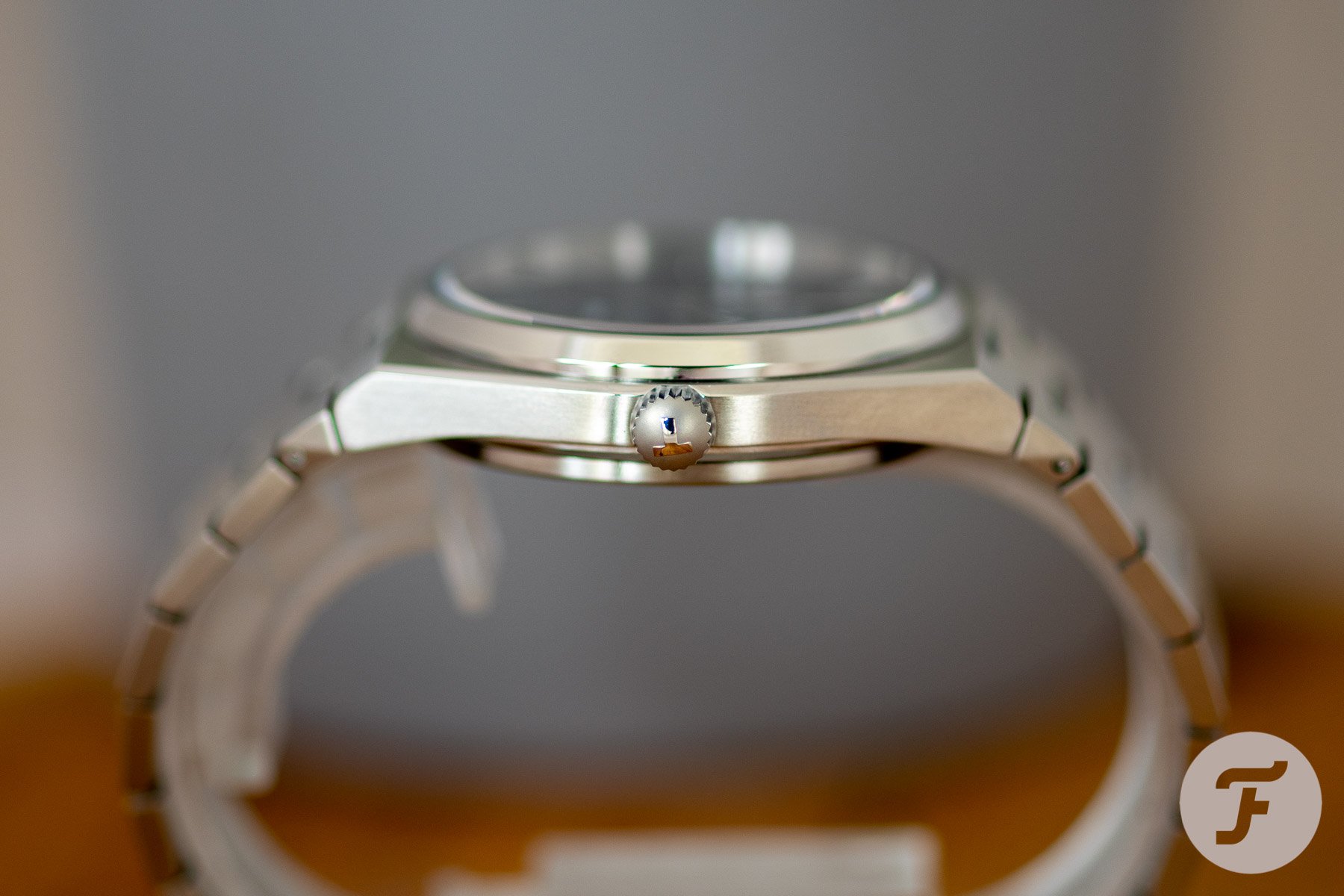 At its widest point, the PRX is 40mm. That’s right on the money in my book. The thickness, as you would imagine, is not substantial at all. It comes in at just 10.5mm. This is thanks to the quartz movement, but I think it serves the overall watch style well. Due to its large and flat case, a thicker case would’ve been too much. The one thing that surprised me is the heft of the PRX. We are talking about 124gramms with three links removed to fit my 7.5” wrist. 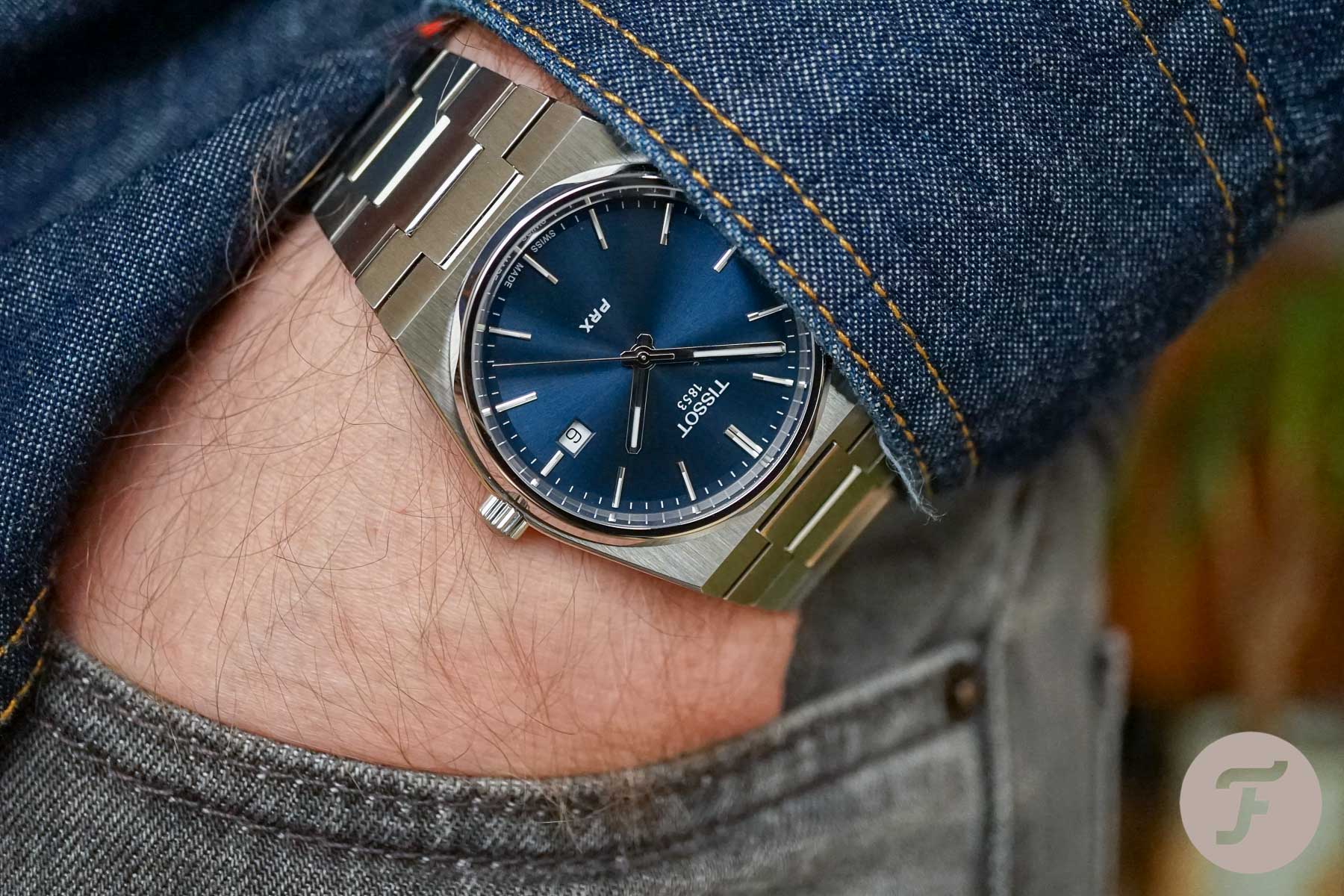 I presume we all felt how flimsy and light those watches from the ’80s were. I can assure you that the Tissot PRX is not such a piece. While the bracelet is tight, the links are flexible, giving them enough space to move and adapt to the wrist. It does not feel like a cuff, something you might have felt with other integrated bracelet models. 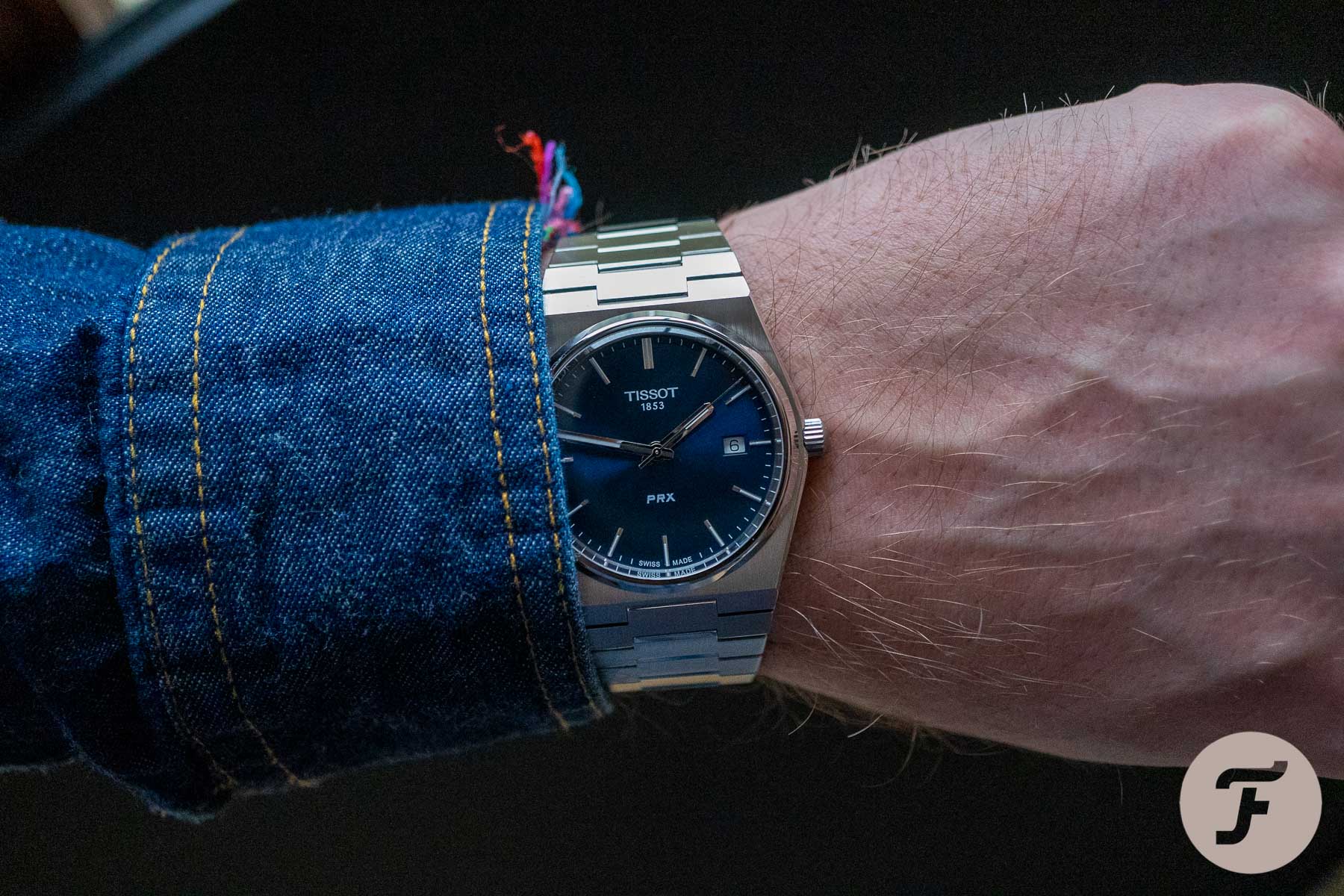 Another factor, as I mentioned earlier, is the finishing. The vertically brushed tonneau case has only a few polished elements that mostly serve as decoration. Such parts are the thin bezel or the bevels on the case and bracelet links’ sides. This combination of brushed and polished surfaces creates a beautiful 3D effect on the bracelet. If you admire it long enough, you seem to forget that this is only a €300+ watch and not something worth tenfold and then some. It is simply stunning. Tissot installed a double folding clasp with security buttons, well hidden under the links to close the bracelet. Additionally, the bracelet has a tapering of 10mm between its widest (at the lugs) and thinnest (at the buckle) links. 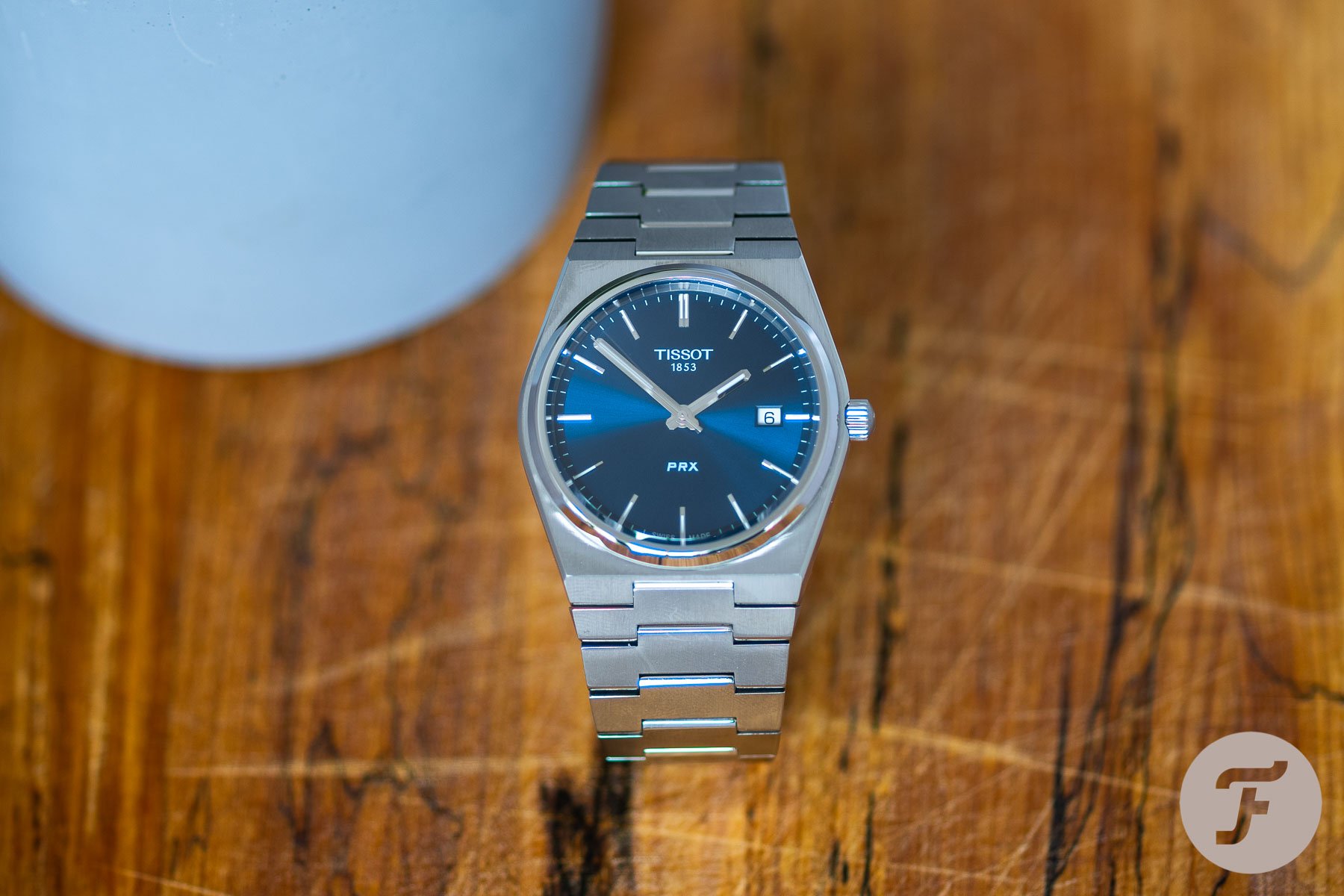 The case and the bracelet are significant factors in creating the PRX’s incredible wrist presence. Yet, the most important part, its dial, is equally important. Tissot installed a sunburst blue dial on the watch. From certain angles, it looks dark blue, almost black. But if the light hits it from another angle, the PRX’s face lights up in a bright blue tone. The playfulness of the dial is the perfect match for the case. Other than the color, the look is simple, with only the brand name at 12 and PRX in a retro-modern font at 6. Long and slim applied indexes help the visibility that matches the silver-colored baton hands with Super-LumiNova coating. 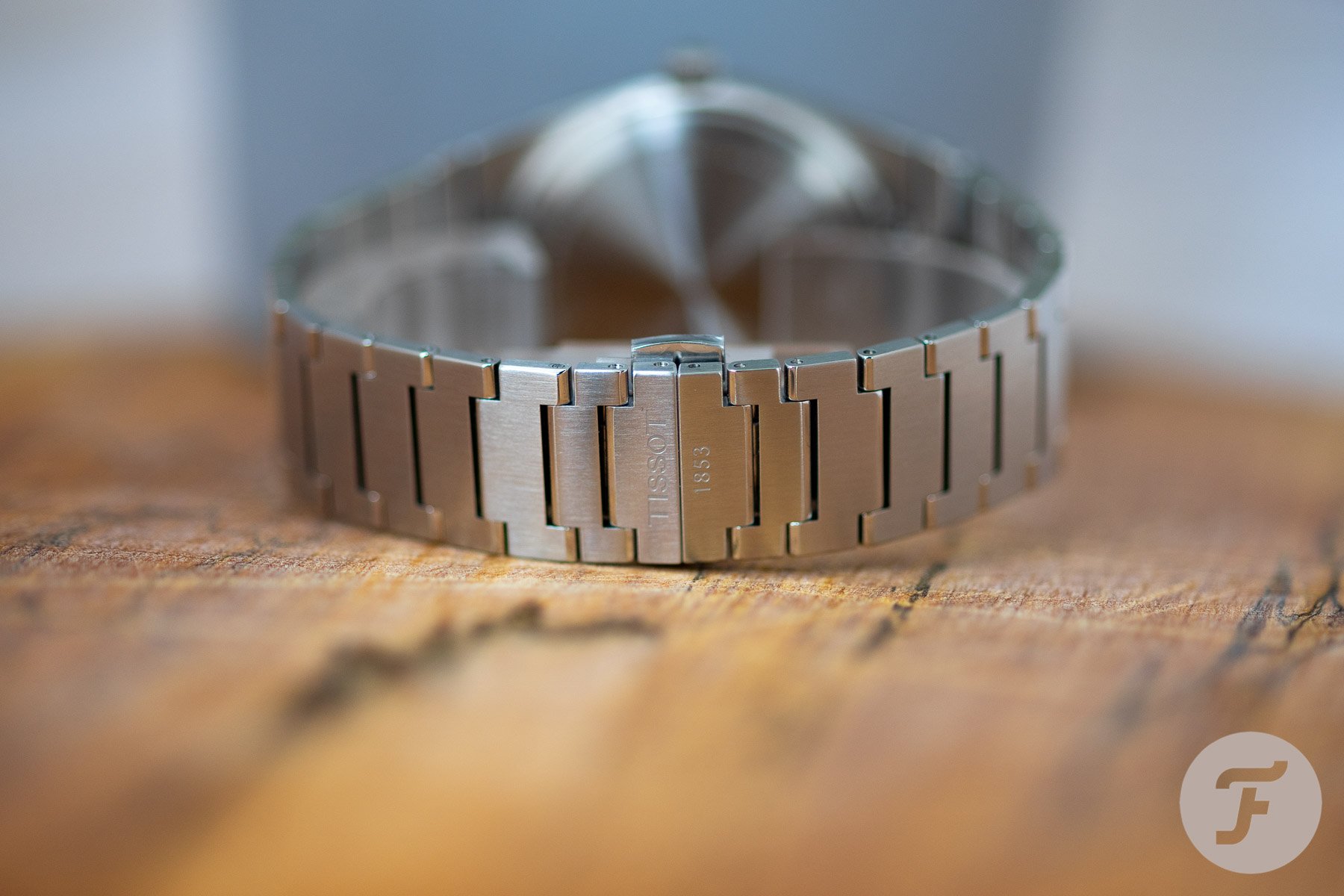 Just like the vintage Seastar, the PRX also has a date feature at the 3 o’clock position. 100m We talked about many things but not the name. Why PRX? According to Tissot, the “PR” stands for Precise and Robust, while the “X” is used here as the roman numeral ten for 10 atmospheres (100m), which is the watch’s water-resistance. So, what does the Tissot PRX bring to the table? Well, first and foremost, a neo-vintage look. Although it takes inspiration from the past, the PRX looks and feels like a modern watch. Sure, the design is not for everyone, but like always, you have to try it on to see if you dig it or not. 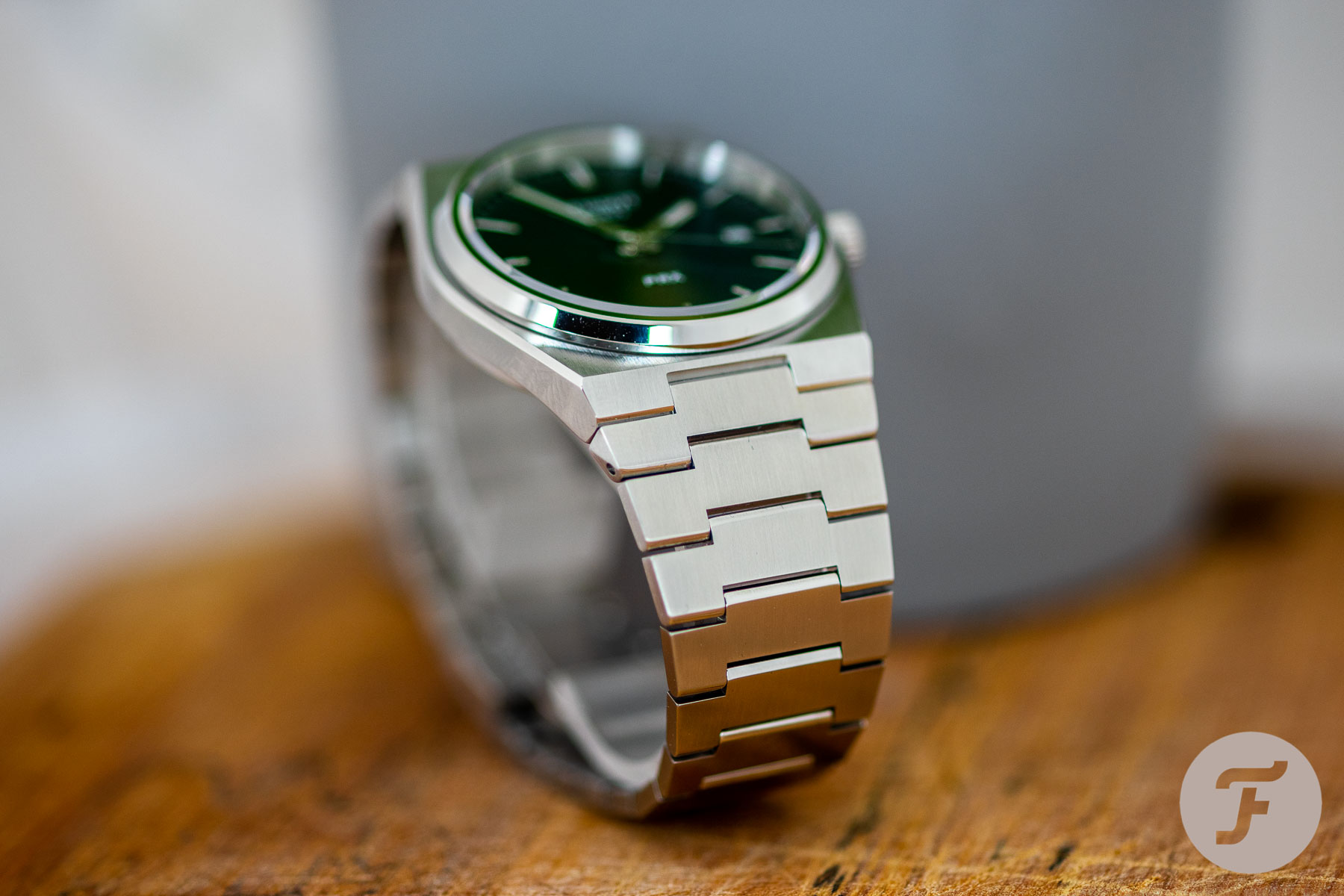 The price is hard to beat; the finishing is on point; the watch is Swiss made, and it has more than sufficient water resistance. Some of you might agree with me but dislike the quartz movement. Tissot knows this, which is precisely why there is a mechanical version on the way. The powermatic 80 is slated to feature in a model scheduled for release later this year. I do not know how much that will cost, but I’m sure it will be a powerful contender in its category. This design with a mechanical movement could be an exciting model. However, I’m afraid we have to wait a bit more for that. Until that model comes out, we have this PRX to enjoy. If you’d like to visit Tissot’s website, please click here.