If you read my Independent Insights article from last week, you’ll have seen that one of my favorite microbrands announced a new refresh to its Resolute line. Not only with an updated version of its field watch, but RZE has also added a new supercompressor too. And not just “in the style of” with two crowns, either. Let’s have a closer look at the new RZE Resolute Supercompressor.

This is not the first time I’ve reviewed watches from RZE. Each time, I’ve been well impressed by what the brand was offering for the price. Both the meca-quartz Valor and the automatic Fortitude were great watches at very affordable prices. The Resolute Supercompressor is a bit of a step up in terms of pricing by comparison, with prices starting at $599 on pre-order before rising to $639 from April 1st. With the Resolute Supercompressor now the most expensive model in the RZE lineup by a stretch, is it warranted? Does it match up to expectations? 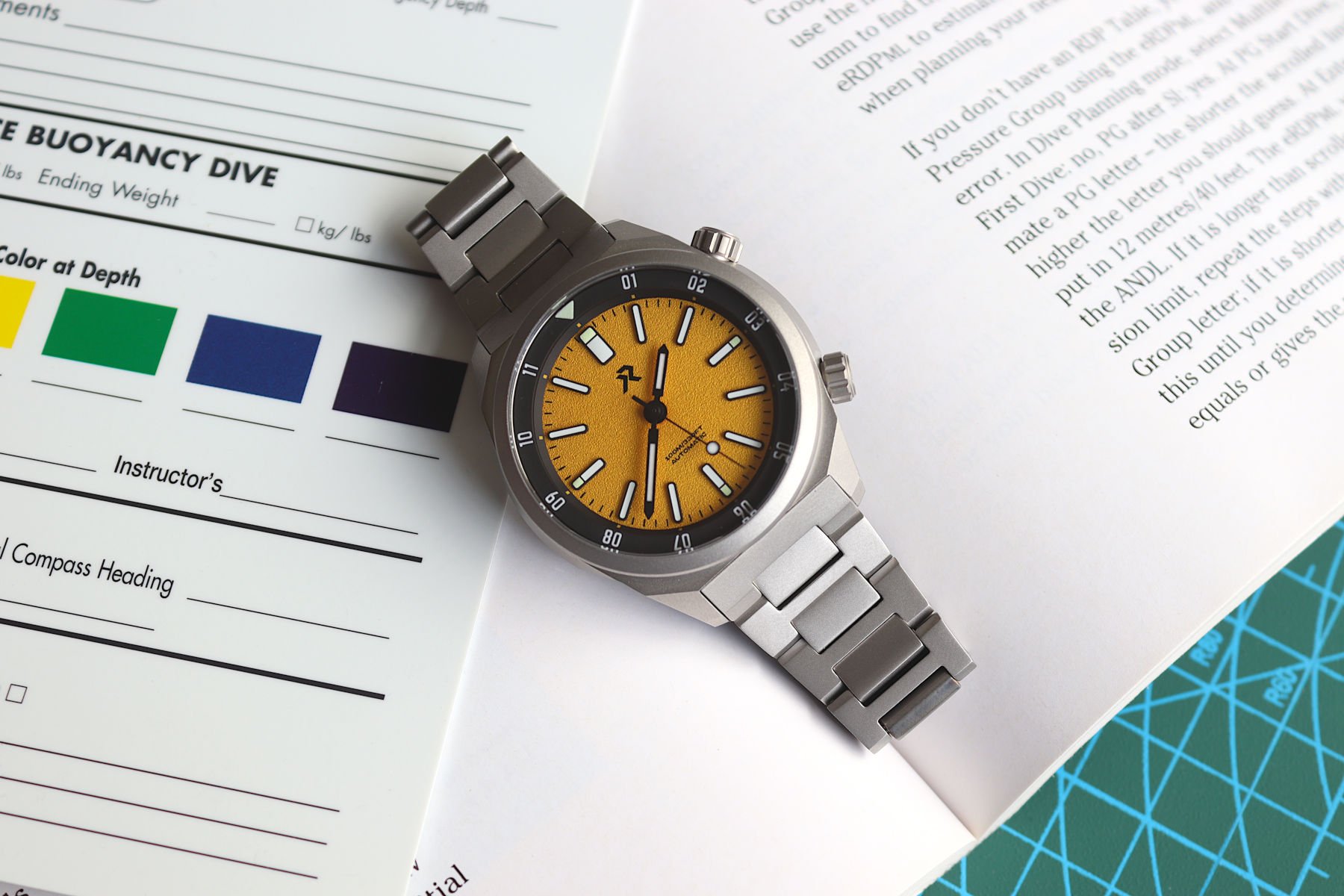 What actually is supercompressor watch?

Let’s first take a look at the supercompressor watch concept. The term is often misused these days to represent a watch with two crowns and an internal rotating bezel rather than the more common external one. It’s certainly not as simple as that, and there’s a clue in the name, specifically the “compressor” part. It refers to the case’s water resistance, which increases as the water pressure increases. The deeper you go, the more pressure is applied to the case back, thus compressing it against the o-ring gasket. 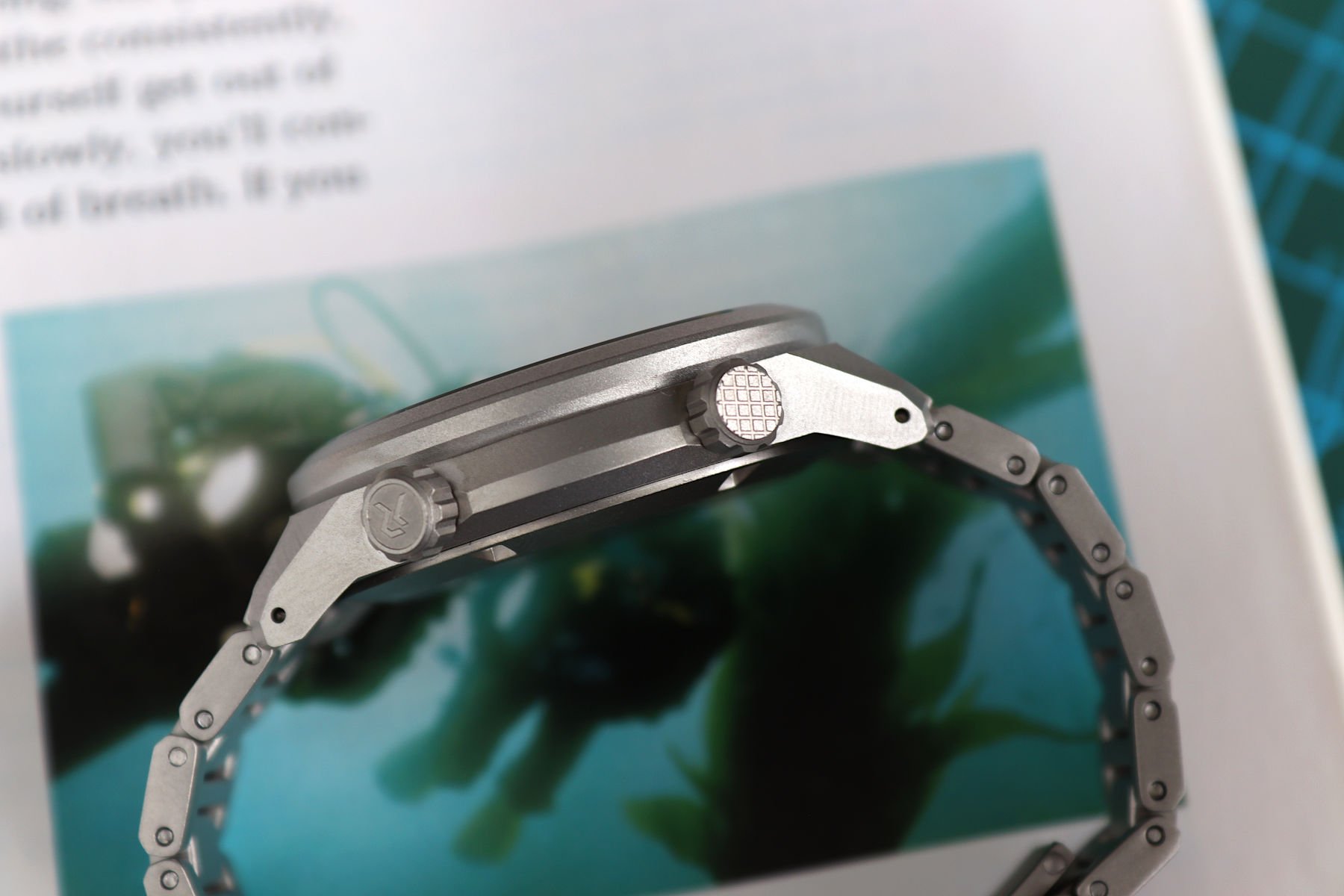 To ensure that the case back is tightly fitted without the water pressure compressing it, supercompressors use a spring mounted to the case back. Another advantage of this setup is that the o-ring gasket does not constantly have 100% pressure applied, thus extending its life considerably. RZE’s Resolute Supercompressor uses a spring-loaded case back along with a Viton gasket to provide genuine supercompressor functionality along with its 200m water resistance. You can ignore the dial printing of 100m on this prototype, it is definitely 200m. 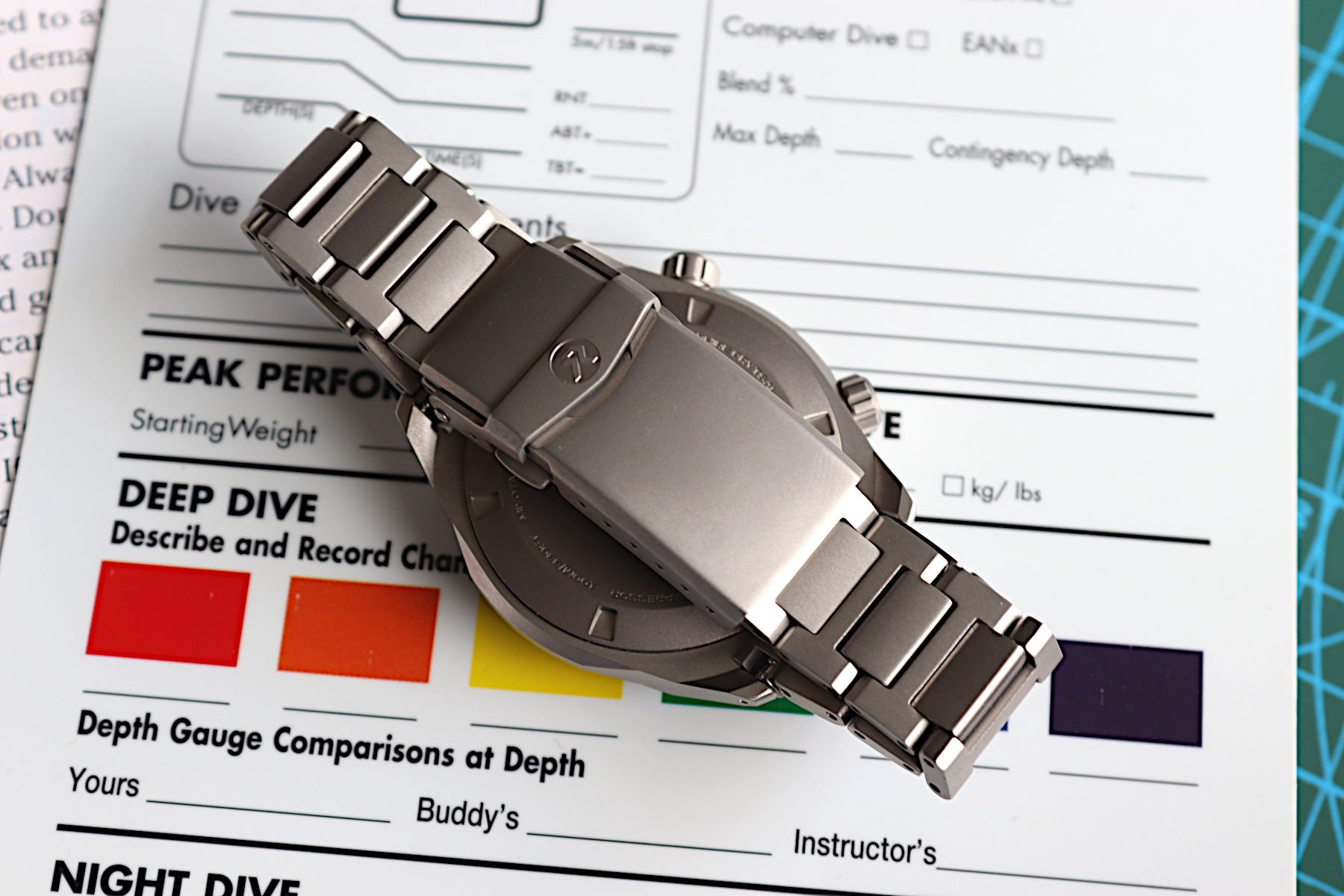 I was very impressed with the dimensions from the moment I received the watch and held it in my hand. The grade 2 blasted titanium case is 40mm in diameter and just 46mm lug to lug. It’s incredibly compact and wears superbly on the wrist. I’ll admit, I had actually expected it to be smaller from looks alone. Visually, it wears more like a 38-39mm watch, which I like. That’s probably down to the internal bezel, which makes the dial aperture relatively small. That said, nothing feels cramped, and all elements have plenty of room to breathe. 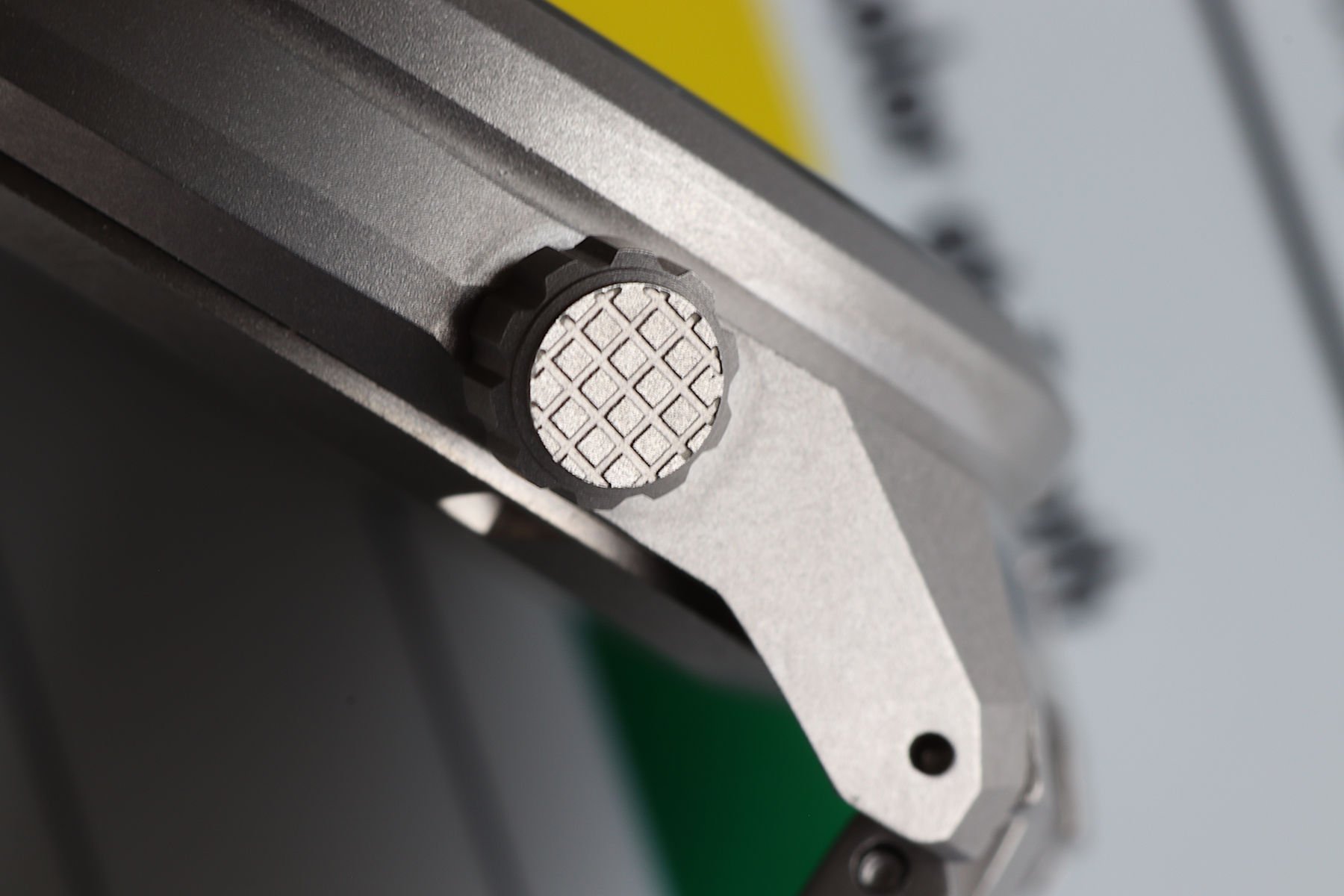 The actual shape of the case features strong lines that are a signature of the Resolute collection. There are serious Grand Seiko vibes, akin to the brand’s quartz models, but they are an homage rather than outright like-for-like. Both the case and the matching titanium bracelet and clasp are blasted, and the finishing is even and consistent. RZE has again used its proprietary UltraHex coating to provide excellent scratch resistance. I have to say the coating is very good, and even when purposely scratching it using a spring-bar tool, not a mark was left on the case. I’m sure if I applied some firm pressure, it would leave a mark, but for everyday use, this watch should stay pretty pristine for a long time! 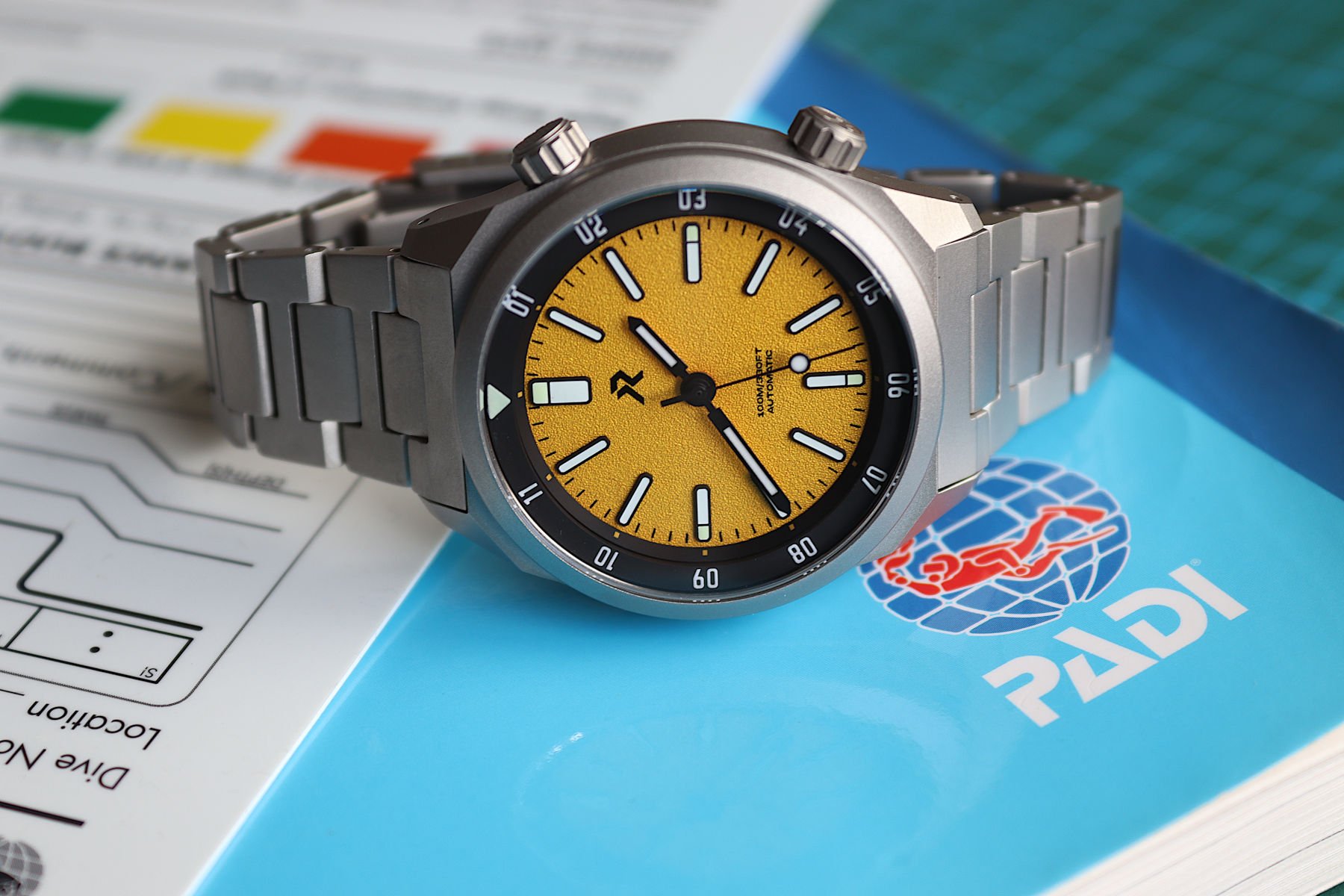 As ever, RZE offers prospective buyers a few color options. A fully-lumed white dial with a black bezel will likely be very popular. Lumed dials seem to be very on-trend. There’s a black dial with a black bezel for the fans of classic combinations. The orange accents add just the right amount of color without being distracting. I was rather taken by the rich blue dial and the lume bezel, again with orange accents. I found it delightfully modern but with just the right level of retro styling. However, as you can see from the images, I have the fourth and final option on my wrist. In the end, I was too enamored by the yellow dial to go with one of the others. The yellow is terrific in hand, and it turns from almost burnt orange to metallic yellow depending on the light. 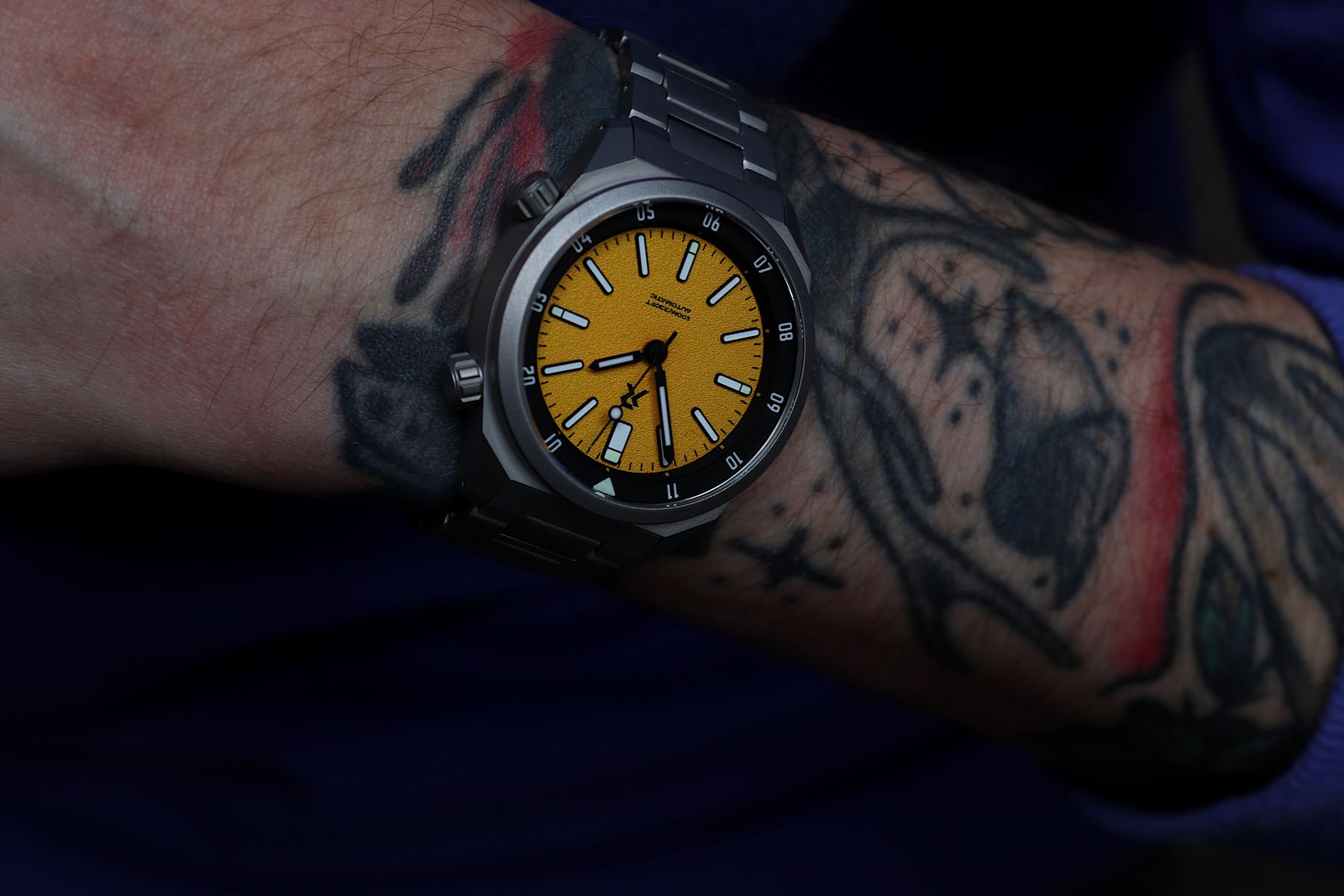 RZE complemented the yellow dial and black bezel with black-coated hands and hour markers. I approve of this decision, as it ties everything together nicely. RZE has also treated the hands and hour markers to a generous portion of BGW9 lume. Interestingly, the brand has also given the tips of the cardinal markers a contrasting C3 highlight that works nicely. I can’t help but be impressed by the attention to detail here. The dial itself has a nice “grained” finish. It’s one we see a lot on microbrands, and when too coarse, it can look a bit cheap and tacky, in my opinion. The texture on the dial of Resolute Supercompressor has just the right level of fineness, and it suits the tool watch vibe. 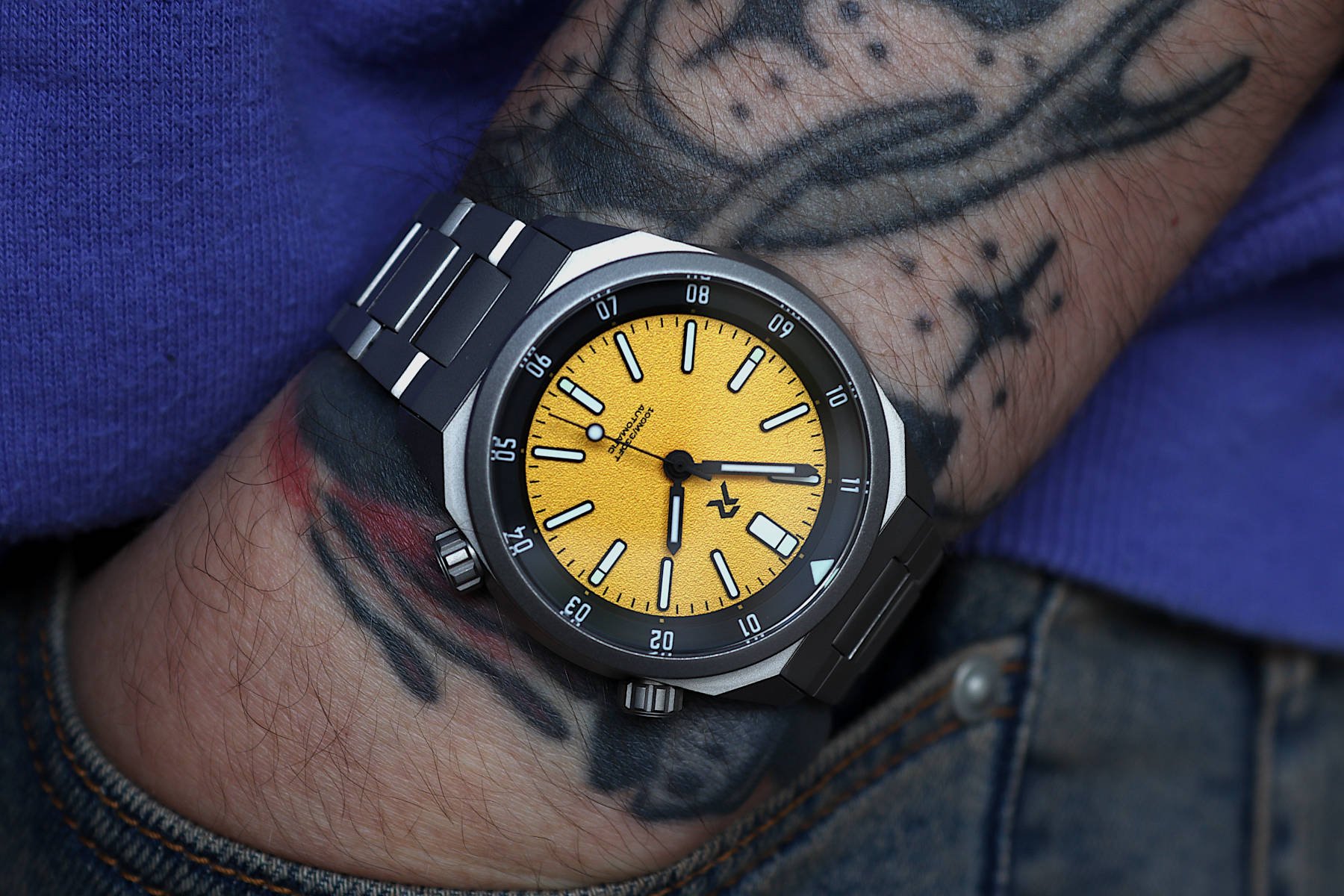 Powered by Miyota — an upgrade from the NH35

As with many microbrands in the sub-$1,000 price bracket, the movement is nothing new or revolutionary. A Miyota 90S5 runs the show. That said, it’s an upgrade on the previous Seiko NH35 movements the brand has used in its automatic watches. The Miyota is undoubtedly more accurate and accounts for some of the increased cost. It’s also slimmer, allowing the watch to only measure 12mm thick. That’s mighty impressive for a watch with 200m of water resistance to boot. 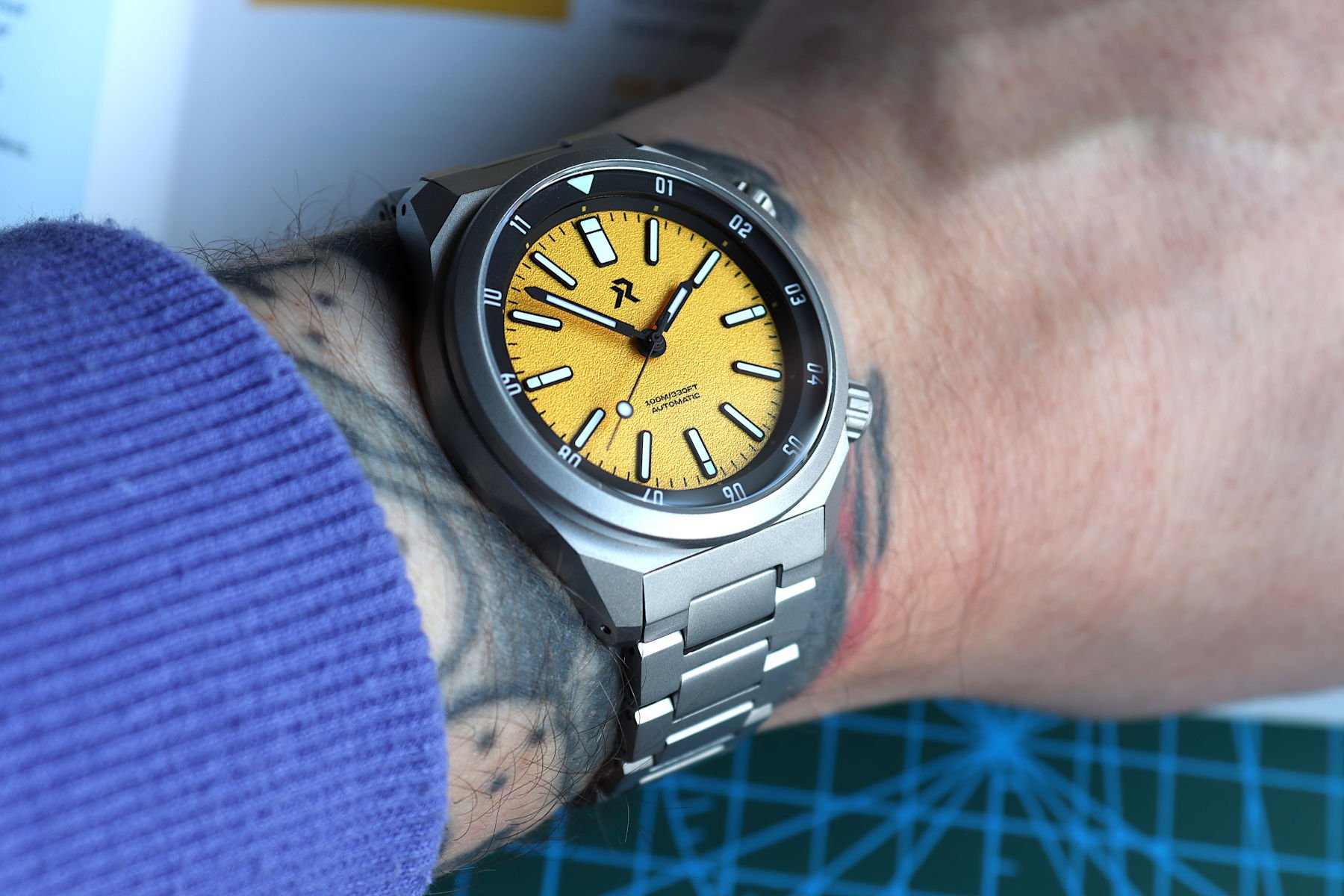 I don’t think it’s hard to see that I was impressed by pretty much every element of the new RZE Supercompressor. Despite the increase in price over the brand’s previous models, this watch is a big step up in every department. While I have always been happy with the build quality, RZE has elevated it here to match the price. The movement upgrade is a welcome one too. However, it’s the fact that we have a genuine supercompressor in titanium for less than $600 (until 1st April 2022) that I am most impressed with. I cannot think of any other titanium watches using genuine supercompressor technology. That’s something that I believe is worth pointing out. If you can think of another, please let me know in the comments! **[UPDATE 13/03/2022: As established in the comments, Farer was the first microbrand to release a titanium supercompressor watch. Thanks for pointing this out folks!]**

In all, I can definitely recommend the RZE Resolute Supercompressor. I have zero issues in saying how delighted I am with the watch. It’s an absolute pleasure to wear and is a positive step forward from RZE that shows what the brand is capable of. I just hope we continue to see more in this vein from the brand in the future!

Pre-orders begin on the 14th of March, and shipping is estimated to commence at the end of July 2022. Find out more on the RZE website. Pricing is as follows:

Hot Topics
Introducing: The New Seamaster Professional 300M 60 Years Of Bond — With A Special Animated Case Back
105 comments
Are You Still After An Omega × Swatch MoonSwatch?
85 comments
It’s Time To Invest In A Dress Watch — Our Picks From Breguet, Omega, Grand Seiko, And More
72 comments
The Rolex Waitlist Conundrum — How Much Will The Price Of Your Watch Increase While You Wait?
50 comments
The Best Omega Speedmaster Watches Of 2022
40 comments
Popular
Top 10 Rolex Watches – Overview of Models Favoured By Our Readers
Fratello
24
Speedy Tuesday – The Original Omega Speedmaster Ultraman
Robert-Jan Broer
5
In-Depth – Vintage Omega Constellation Watches
Robert-Jan Broer
26