Set to launch soon, we already got a chance to check it out and try it on
Lex Stolk
comments 4
Share

What is Korea most famous for? According to foodies, it’s kimchi. Motoring enthusiasts say it’s cars, and Android users claim it’s Samsung. But what do watch fans say when they think of Korea? Maybe Rolens because it reminds them of the Swiss king of watches, but my guess is that a lot of watch aficionados stay silent when they try to connect Korea with timepieces. That could be a very positive thing for microbrand Varon Chiri, which will launch its very first watch on Kickstarter come November 29th. The Varon Chiri Blazer is presented in five colors, and we received the blue version of the ambitious all-arounder.

With globalization comes knowledge, among many other things. Before the internet came along, Koreans who wanted a watch bought Korean. But “the times they are a-changin’,” and the current generation of Koreans know perfectly well what’s hip and happening in the world of luxury. That’s why a brand like Rolens (로렌스), which started back in 1950 and created watches for two South Korean presidents, is now seeing newcomers emerge. Brands that are very much in touch with and aware of the origin of luxury watches, Switzerland. Take Amy Eujeny, for instance, which positions itself as a high-end watch brand and produces watches that take design cues from the Royal Oak Offshore and complicated Richard Mille models. And soon there will be Varon Chiri, a brand created by a gentleman named JG Chin, whose company is an official retailer for Yema. 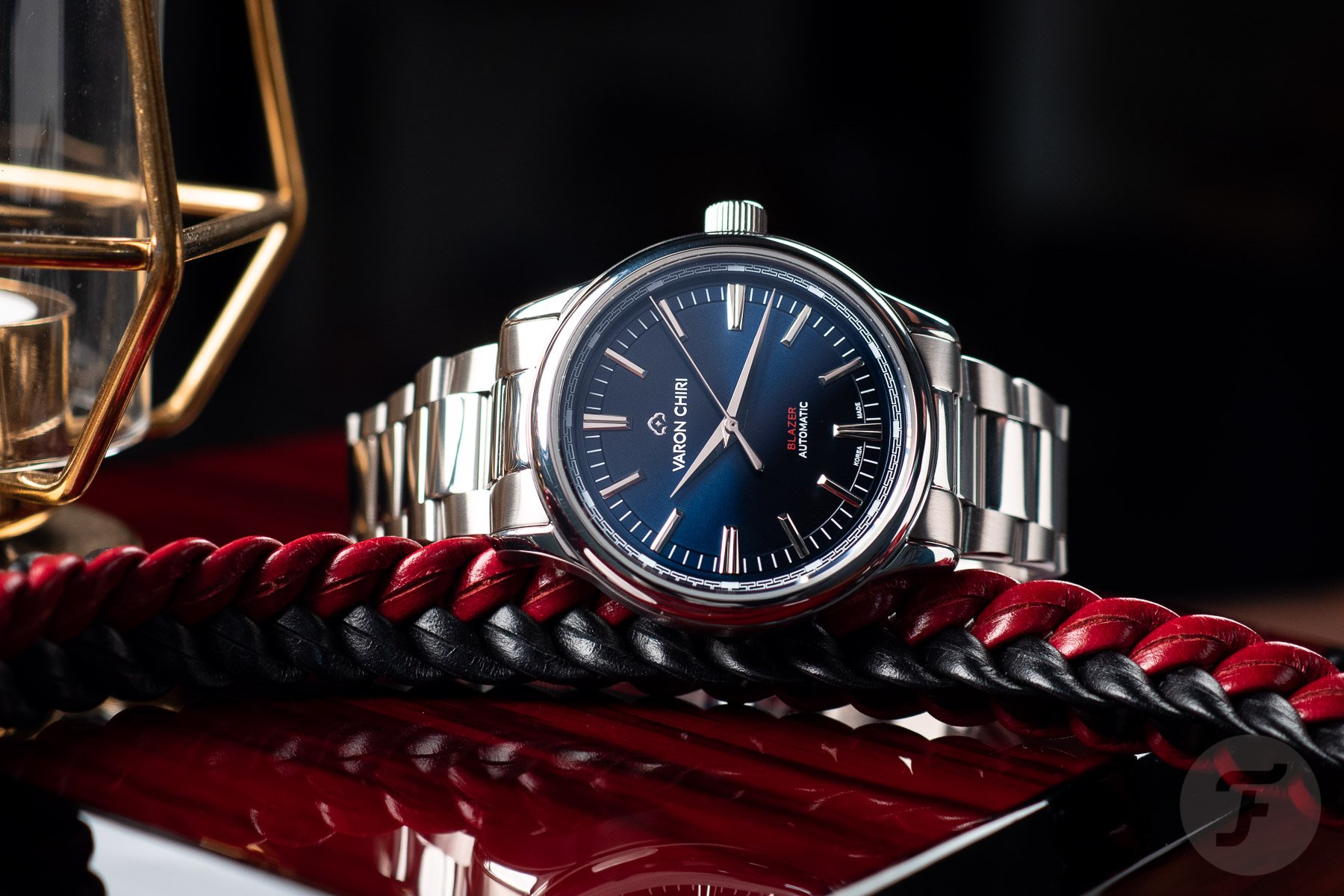 Before you get to a watch, you have to open the box. And since we’re in the high-end watch business, the watch box is an important part of the luxury experience. The box of the Varon Chiri Blazer took me by surprise. Why? Because it shouts Korea — a Korean car from the late 1990s or early 2000s, that is. The box would fit perfectly in the center console of the 1999 Daewoo Leganza. This is a flagship four-door saloon that was priced and sized as a front-wheel-drive compact sedan. Have a look at the interior yourself and tell me I’m wrong.

And while you’re at it, please also look at the daring advertisement in English with a phonetic Italian accent. Translate that slogan to the Varon Chiri Blazer, and it would read something like, “Eet lookz like eet comez from Switzerland, but eet don’t.” And in the case of the Blazer, that’s not as outrageous as it was for the very bland Daewoo. The watch, that is, not the box. 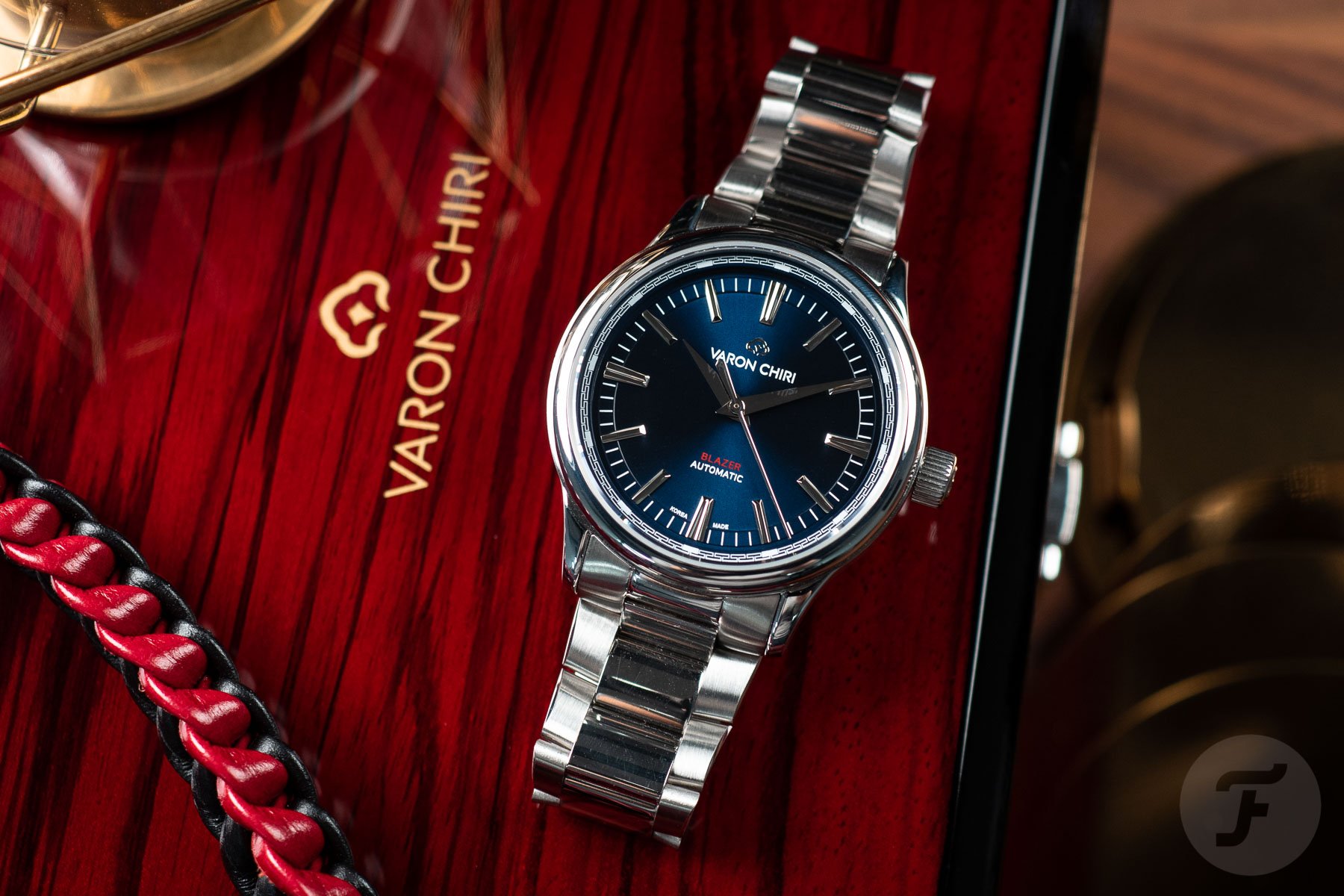 The voice of watch fanatics

Luckily, you don’t have the box on your wrist, but rather, the steel watch. And the way JG Chin created the Blazer shows that he’s not only very passionate about creating a quality watch but also is in touch with what the watch community wants. He conducted various surveys among over 750 watch fanatics, and the Blazer was created with their input in mind. The watch is nothing like a Daewoo Leganza. The Blazer looks like it could also come from Europe or Japan. 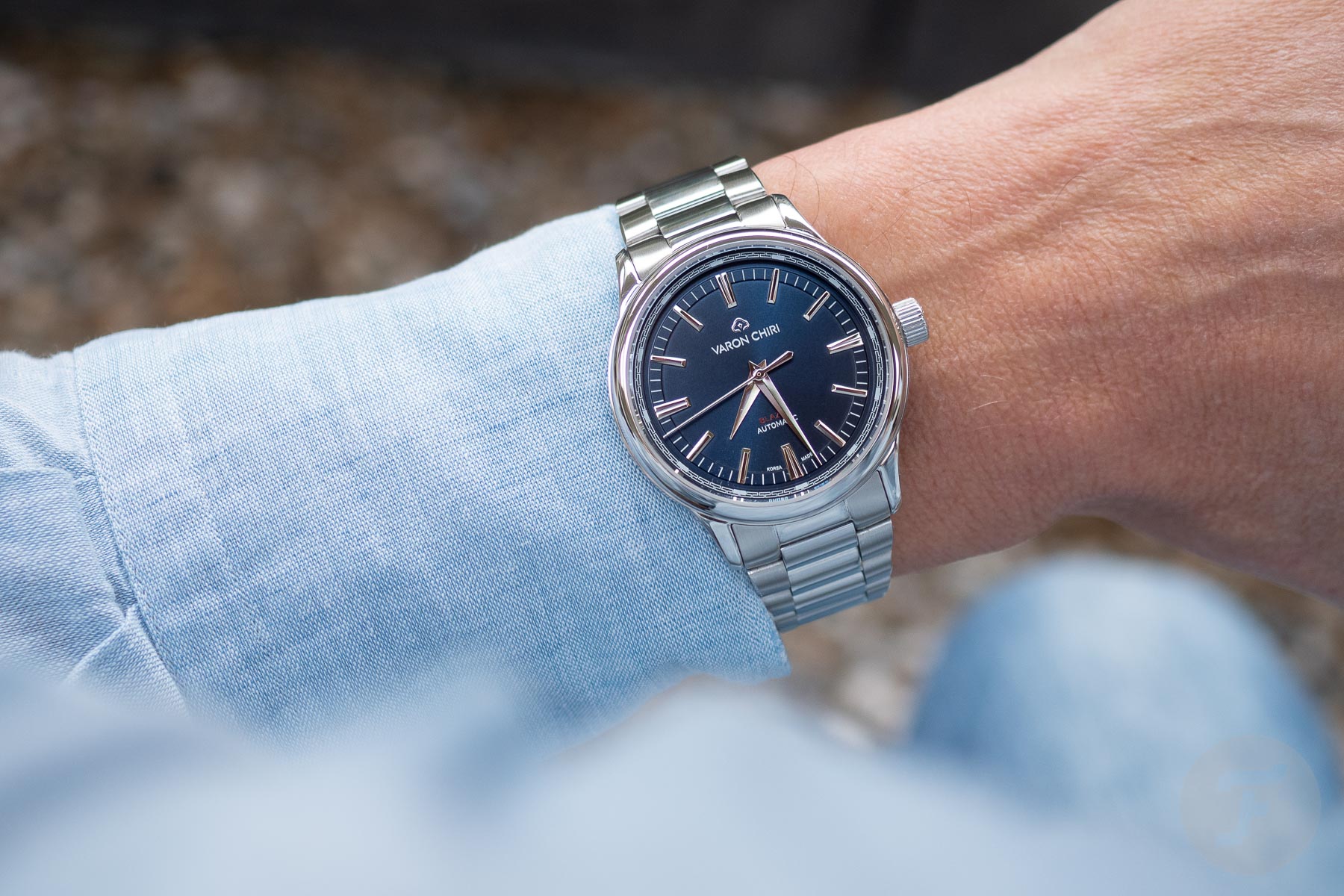 You could also say that it looks like a modern-day Korean car. Back in the days of the Leganza, the different Korean car manufacturers were still looking for their voice. Now they have found it. The electric Kia EV6 is the 2022 Car of The Year, for instance. You could compare the high-tech EV6 to a Samsung Galaxy Watch5. The mechanical Varon Chiri Blazer is more like a Kia Stinger GT, the V6-powered, 366 Bhp sports saloon that has to compete with, for instance, sporty Germans. Not an easy task at all. Can the Blazer do better than the Stinger GT? Or, to keep it in the world of watches, the Swiss and Japanese competitors? 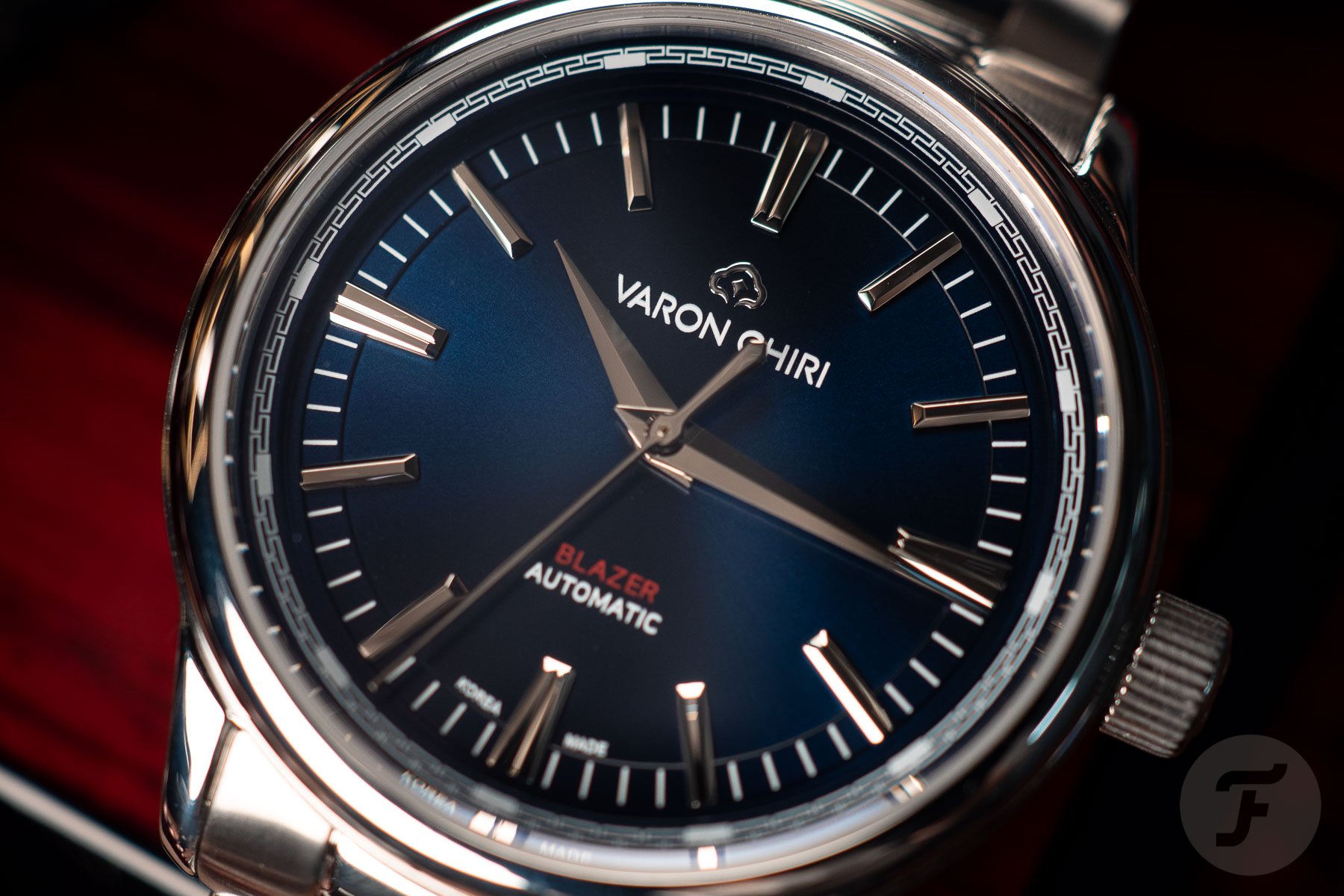 The Varon Chiri Blazer (US$590) is a newcomer that has to compete with watches like some models in the Japanese Seiko Presage collection and those from Swiss brands like Tissot and Hamilton. It’s David versus Goliath, for sure, but as you know, the little guy has a fair chance. And the Blazer — named after the versatile jacket that can be worn in both formal and more casual settings — looks strong right out of the box. It’s not exotic, but reassuringly familiar, yet with some distinct and subtle features that go a long way in watchmaking. The logo has a historical connection with the Korean Joseon Dynasty, but the rest of the watch tells of a universal watch language. 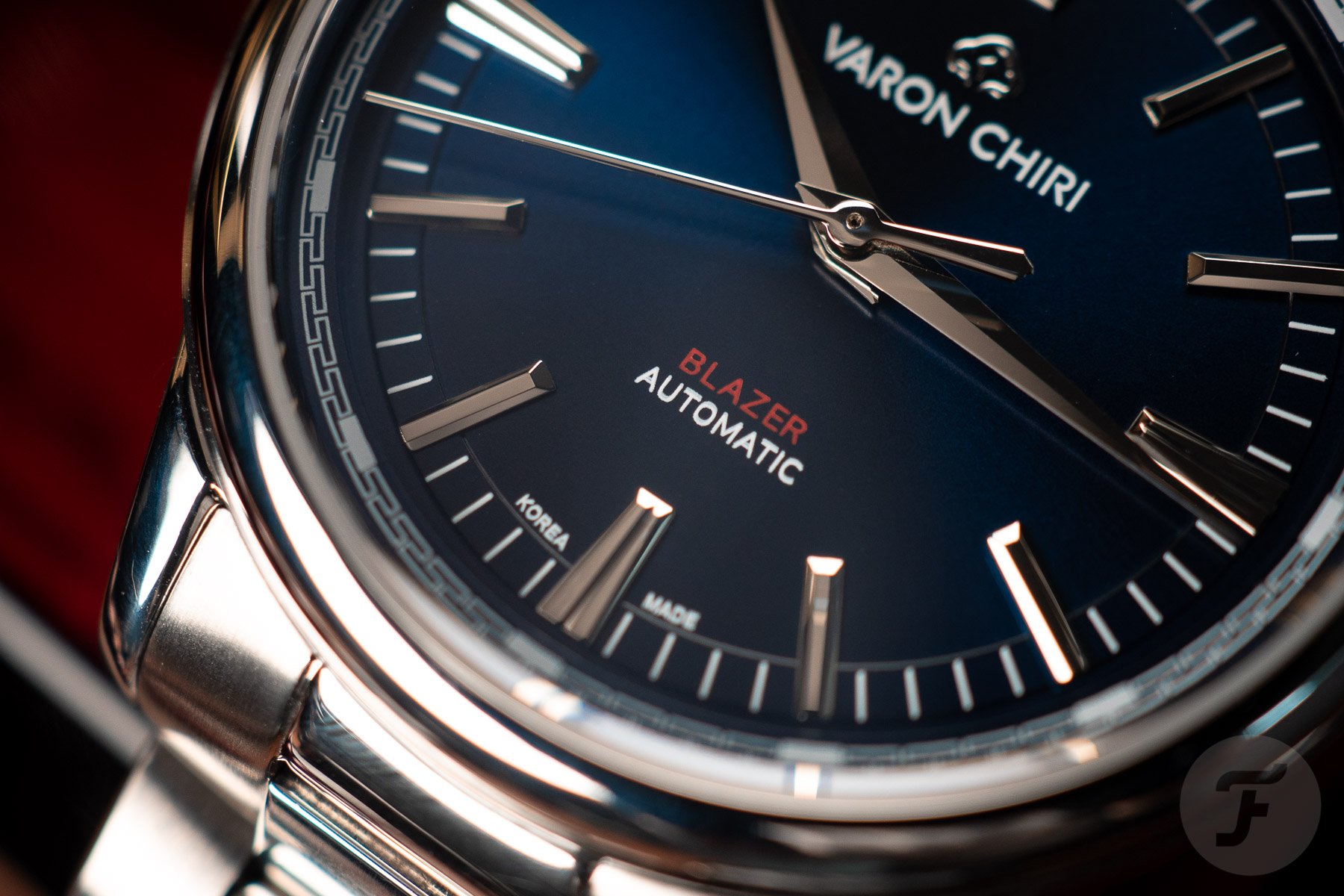 There are both European and Japanese style characteristics. Inside the steel 38.5 × 9.7mm case with a lug-to-lug length of 45mm — thank the 750 watch fanatics from the survey for this very well-balanced case size and JG Chin for listening to them — beats an automatic Miyota 9039 movement. This 4Hz caliber with a power reserve of 42 hours and hacking seconds is reliable like a Toyota engine. 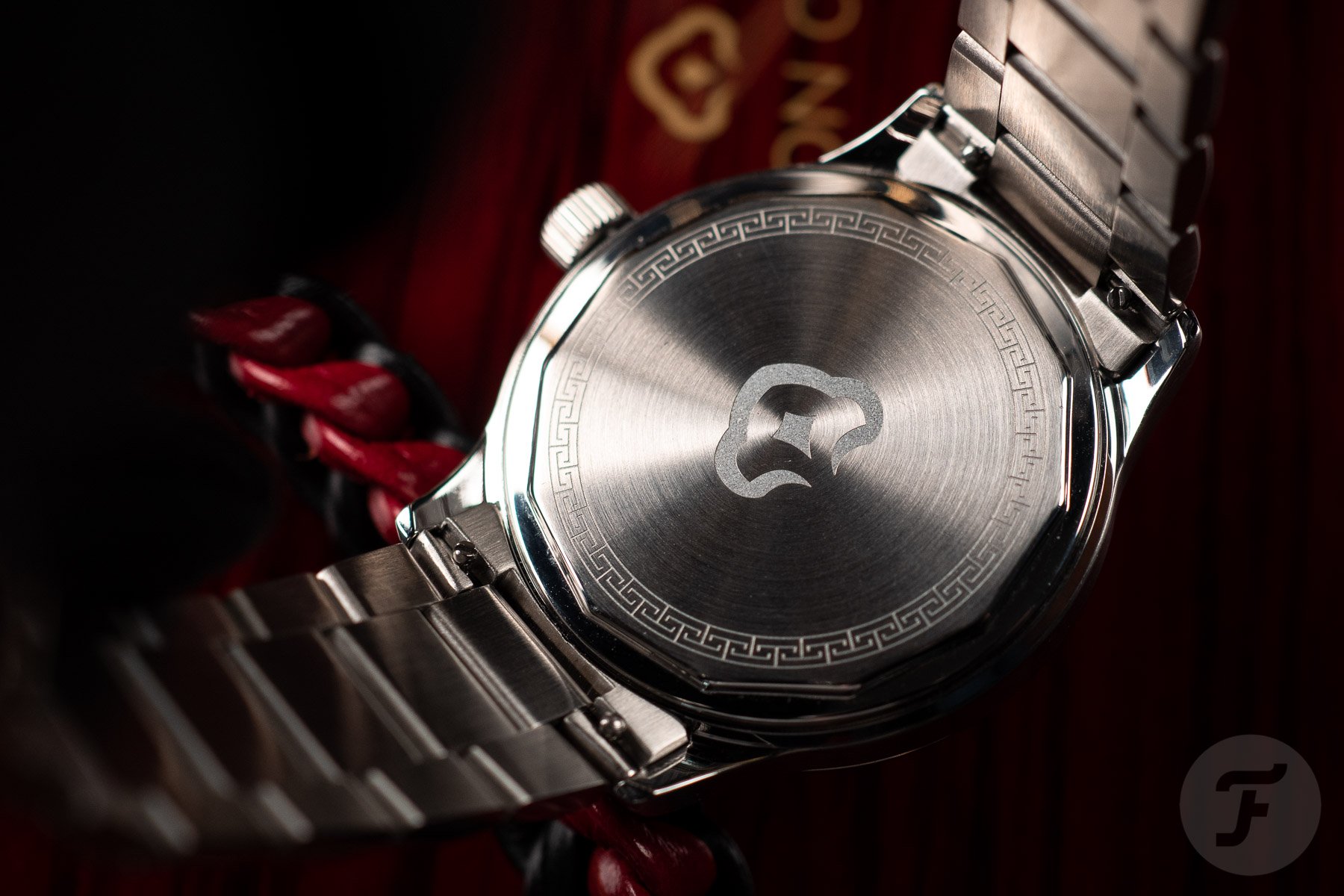 The overall look of the Blazer is European, while the polished dauphine-style hour and minute hands make me think of my Grand Seiko. But some decoration details are Korean. Take the case back, for instance. Here you see a soft engraving of a traditional pattern inspired by the walls of Gyeongbokgung Palace in the north of South Korea’s capital of Seoul. The wall has protected the palace for centuries, and the decoration symbolically protects the wearer of the Varon Chiri Blazer. And since I touched upon symbolism, I might as well explain the name Varon Chiri now. JG Chin answered my question about the meaning of the name — which means “repel evil with right will” in Korean — as follows:

“I have seen some malicious brands providing false information with some arrogant attitude. I thought this was an act of deceiving people who really love watches. So I wanted to create an honest and authentic brand for those who really like watches. And I thought that this will ultimately be the starting point for eliminating malicious brands in the global watch industry. Of course, there are so many things I need to upgrade and develop. But I will not cheat people and always keep a respectful mindset.” 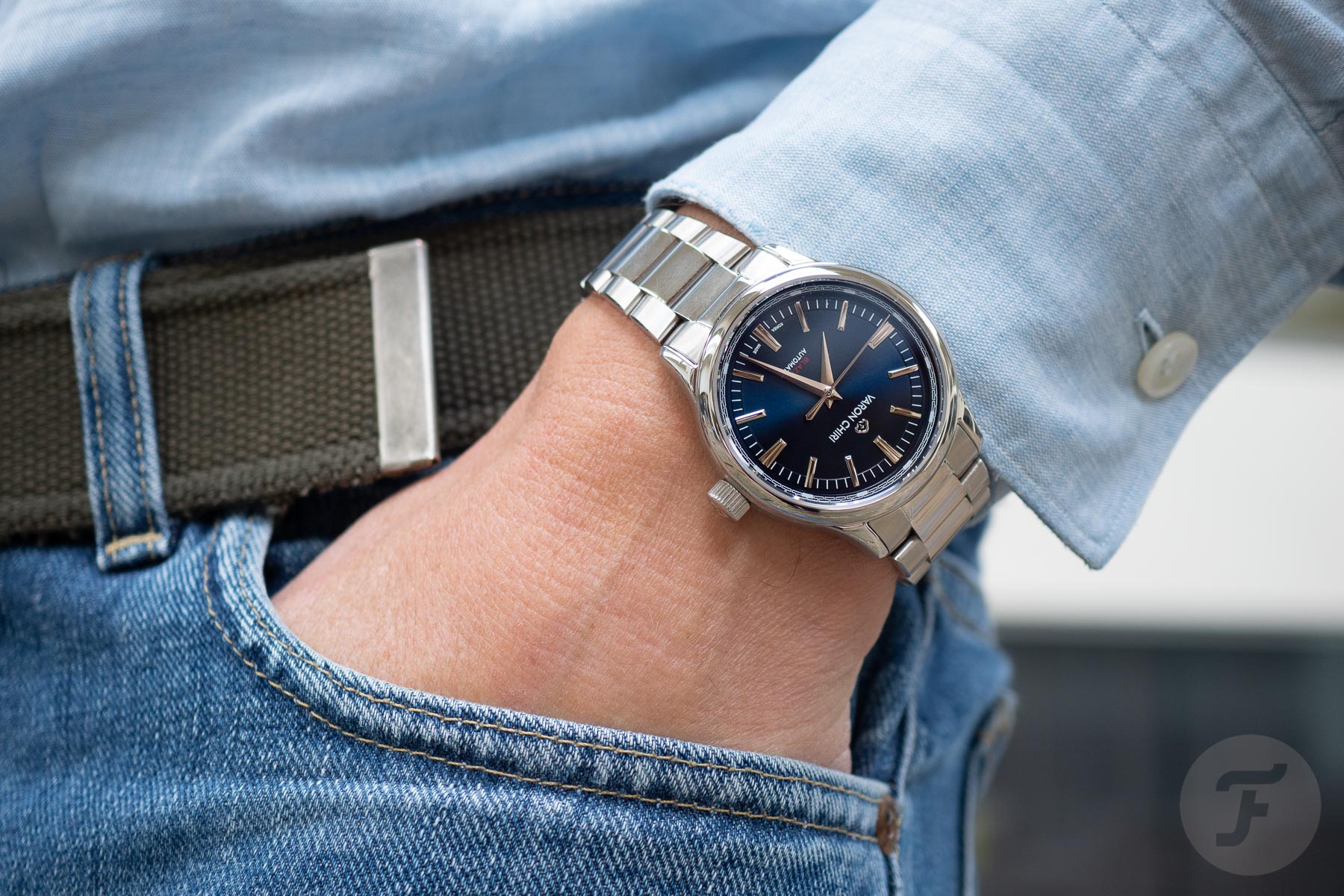 Five colors to choose from

Turning our attention back to the dial under the flat crystal with anti-reflective coating, we see a double-chapter ring design on a polished dial with a sunray effect as well as applied and faceted indices. The navy dial we had at Fratello HQ is a standard color, and so is a black and a white dial. But there are also the Kickstarter specials with green and Ice Mint dials. All of them are shiny but not too shiny for my taste. They are sporty and dressy at the same time. And so is the overall design of the watch and bracelet. There’s a rounded bezel that’s hard to dislike, and the three-link bracelet with a double locking clasp, micro adjustment, and a quick release is very solid and well finished for a $600-class watch. 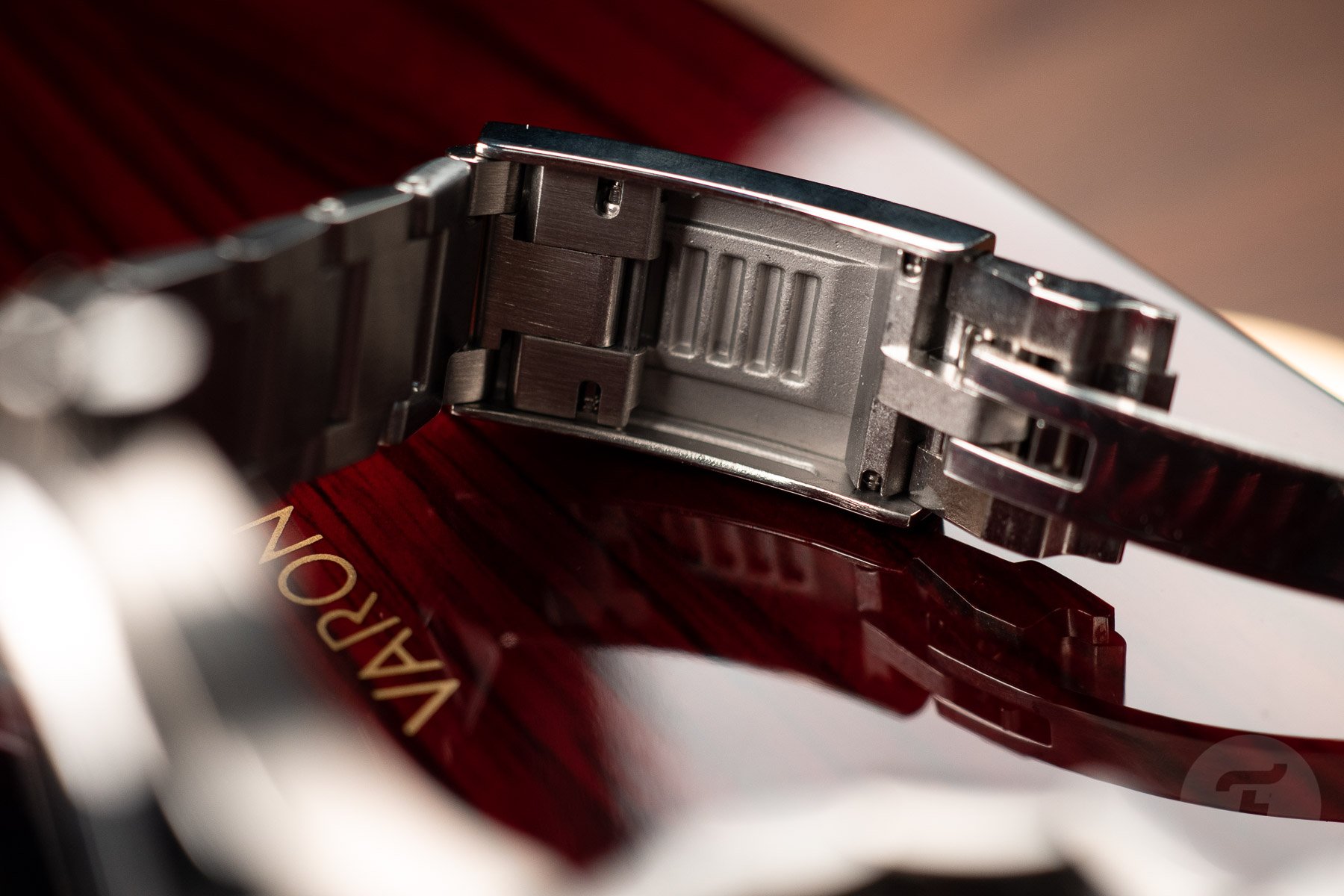 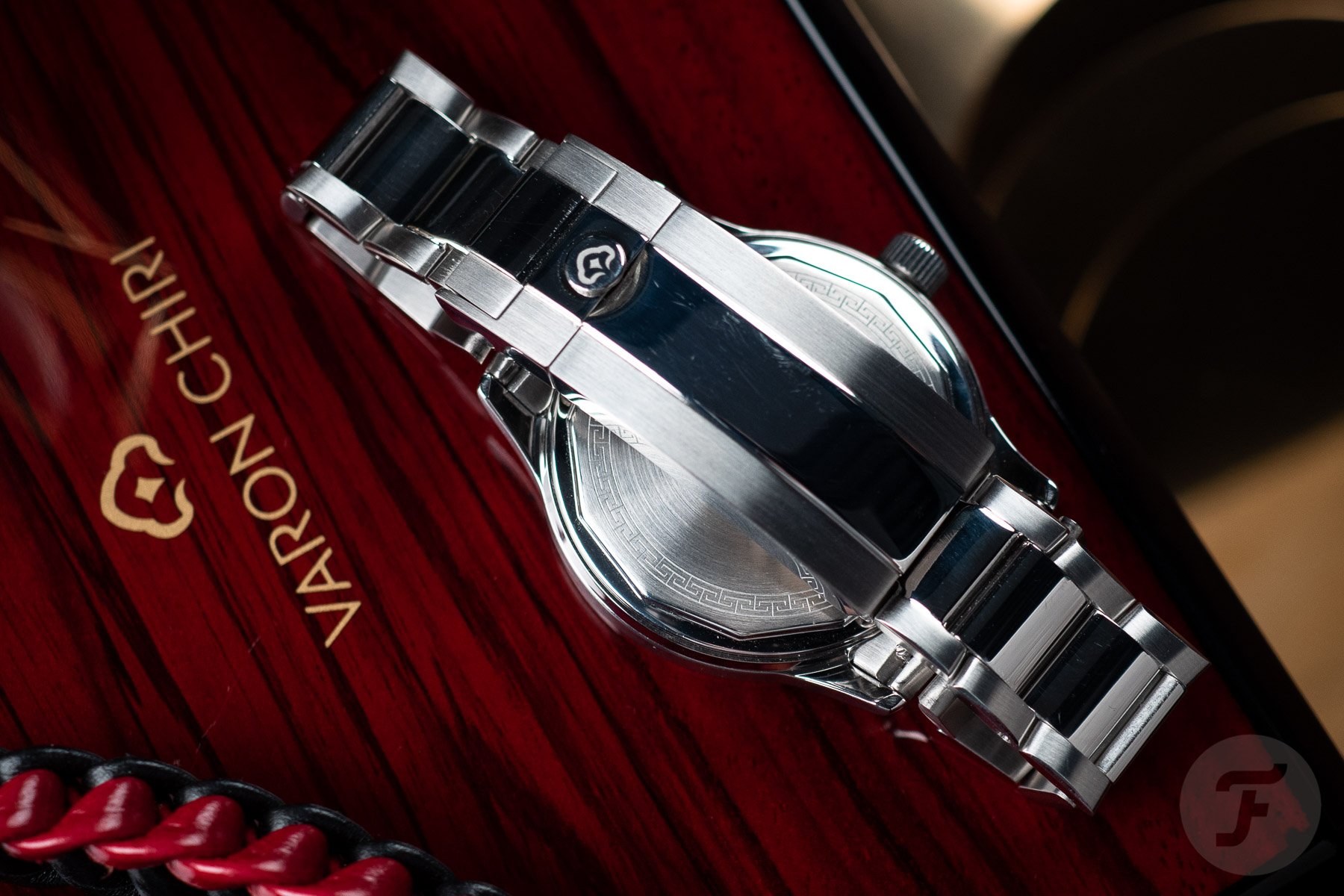 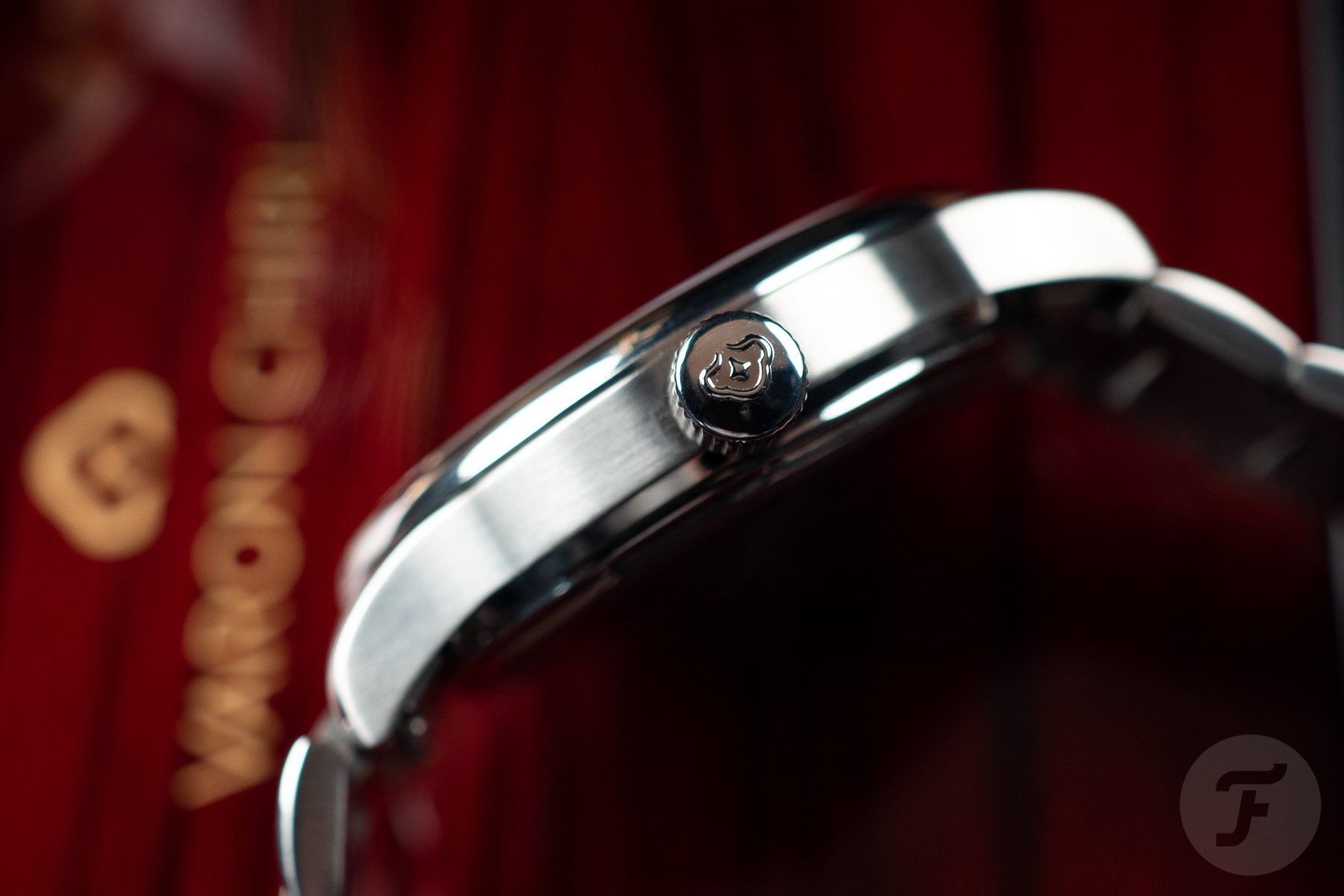 The Blazer would also look good on a leather strap. And that’s where the Kickstarter Stretch Goal comes in sight. Come November 29th, the Blazer can also be ordered with an extra alligator leather strap with a folding clasp and a quick release if you’re willing to pay a little more. 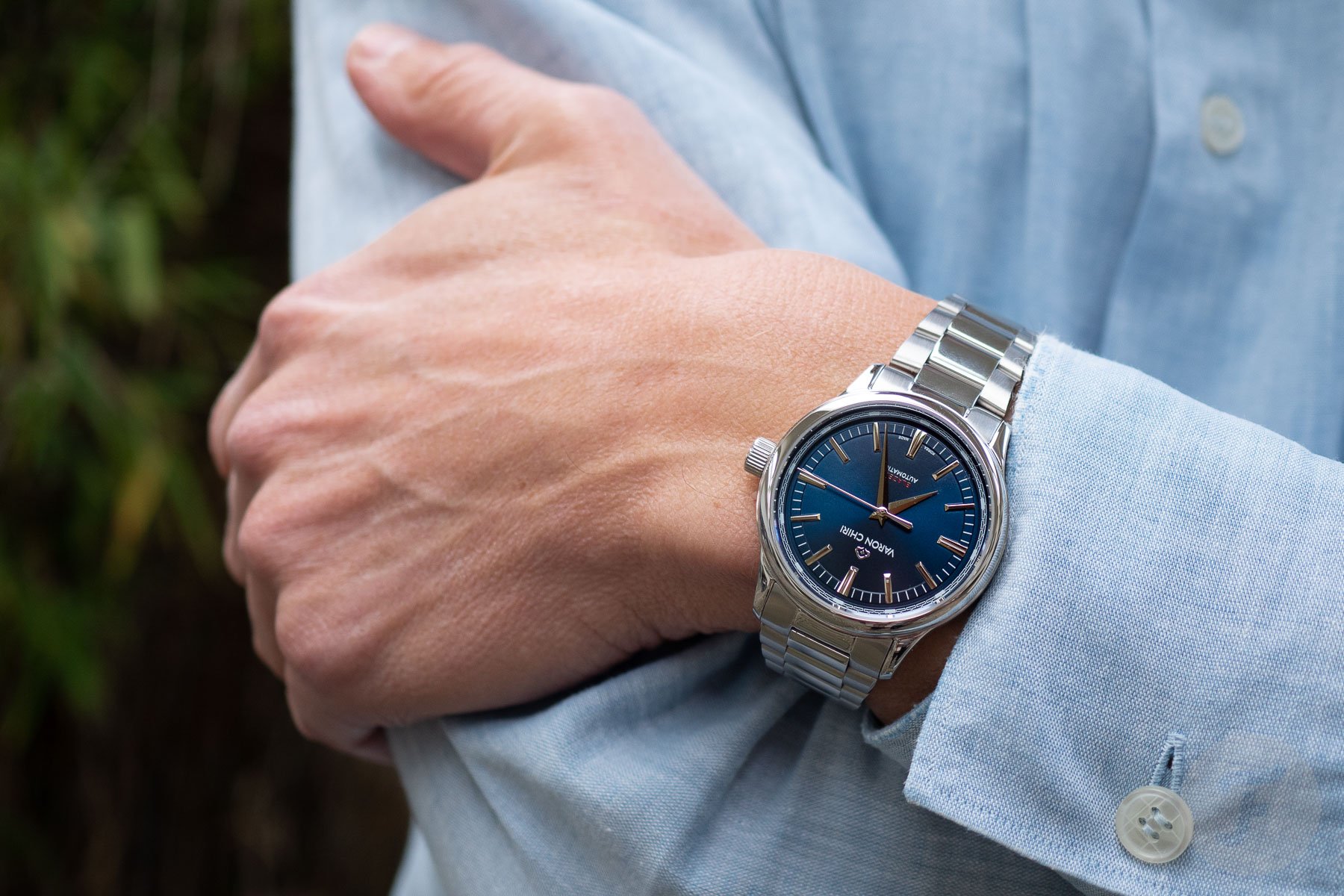 The Blazer is Varon Chiri’s first timepiece, and it is a pretty impressive debut. The official retail price is, as I wrote before, US$590, and for that amount of money you get a lot of watch. It also gives you a chance to be a trailblazer. You can be the first in your group of watch friends to rock something Korean. And to convince you financially, on November 29th, pre-orders will be available for $420. And the extra alligator leather strap to bring out the elegant and dressy look of the Blazer can be had for $89 instead of the official retail price of $150. I think it shows that watch enthusiasts were consulted to create the Blazer, and it paid off. 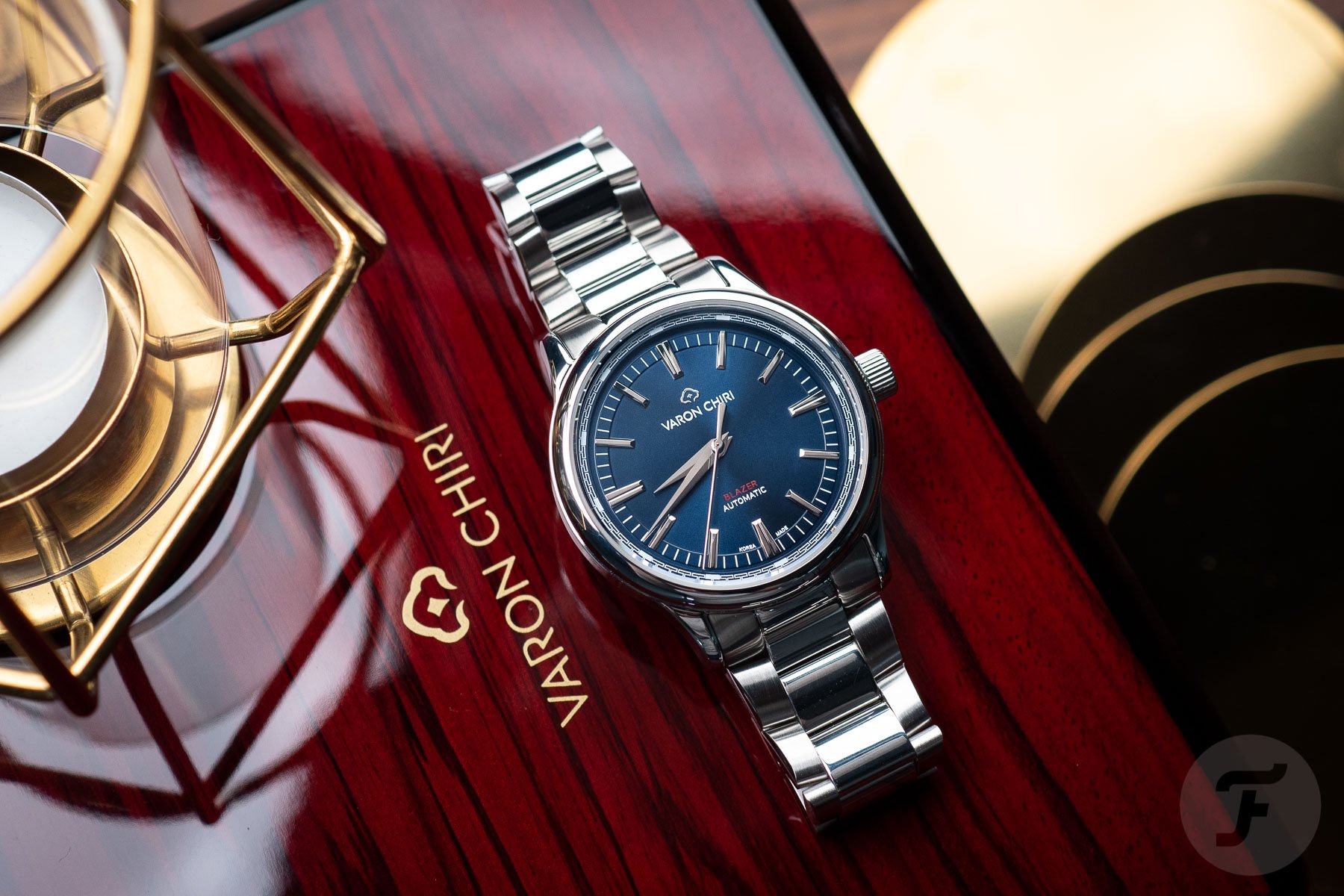 The Varon Chiri Blazer looks like a balanced, mature, and good all-around watch. And because of the brand’s founder’s ambitions, the build quality is also convincing. Is the Blazer a spectacular and mind-blowing watch? No, but that’s not the point. The versatile Blazer is, however, affordable, classy, and sporty, plus it can deal with water to a depth of 100 meters.

But can it compete with the Tissots and Seikos of this watch world? Everything takes time in the world of watches, but if the Korean automotive industry managed to become a major player, why can’t a Korean manufacturer of watches do so as well? What’s good to know is that Varon Chiri will continue to move forward with an open mind by actively collecting the opinions of watch owners and enthusiasts worldwide.

Have a look at Varon Chiri’s official website to find out more about the Blazer, set for launch on November 29th.