We hear the words “legend” and “icon” used (very) frequently and, oddly upon reflection, interchangeably in the watch industry. However, when it comes to the Blancpain Air Command, the legend of the watch’s origins is far more apt than its well-deserved iconism. Why? Because no one is quite sure where it came from or from what exactly its name derived. What is sure, though, is the fact this iteration is one ice-cool customer and boasts a surprisingly wearable aesthetic despite its undeniable luxury status.

Whenever the conversation turns towards super-high-end watches (and, make no mistake, this Blancpain Air Command Flyback Chronograph qualifies as exactly that), it’s easy to lose focus on the product itself. At this price point, the “product” is undoubtedly a “luxury commodity” or an “asset”, of which you are not just the owner, wearer, and admirer but also the “custodian”. Now, that might seem like nothing more than a bunch of semantic hair-splitting, but I find the presence of these aforementioned assumptions as insurmountable as a physical barrier between me and the proper analysis of the watch as… well… a watch. 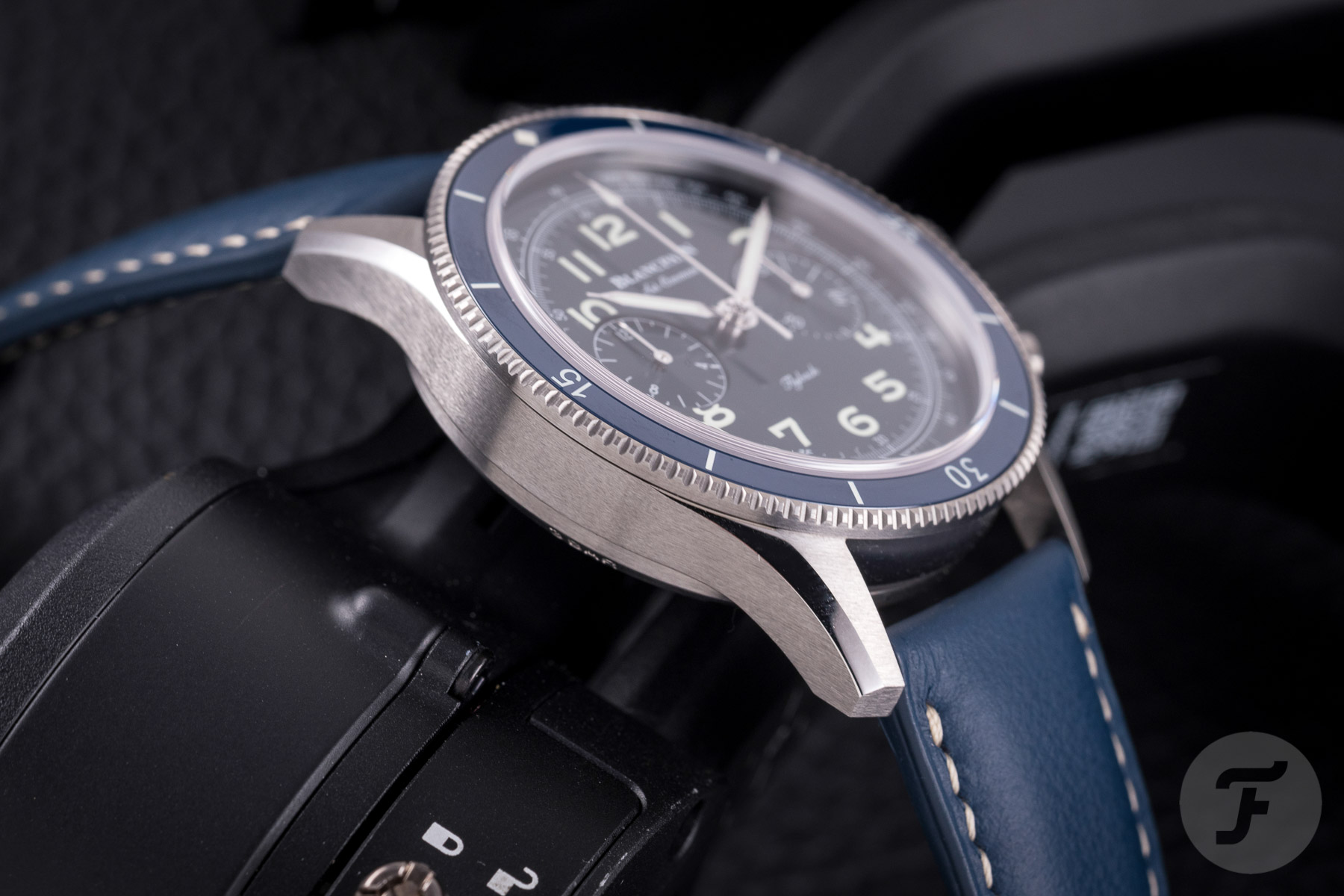 Despite my occasional mental meanderings, Fratello is not a philosophy publication. Rather, as I’m sure you are aware, we are a team of dedicated watch reviewers known for our direct opinions and no-holds-barred assessments. In this day and age, it can be particularly difficult to remain laser-focused on the ticking matter at hand given the specter of branding politics, suspicious stock-control practices, and strategic maneuvering designed to catch consumers off guard. However, in this instance, I think it is worthwhile to strip away the higher-brow musing about what Blancpain is, where it sits within the Swatch Group, and what value the name on the dial adds to the watch in question. Instead, we should take a good hard look at the object you see captured in these beautiful images (thanks, Bert). 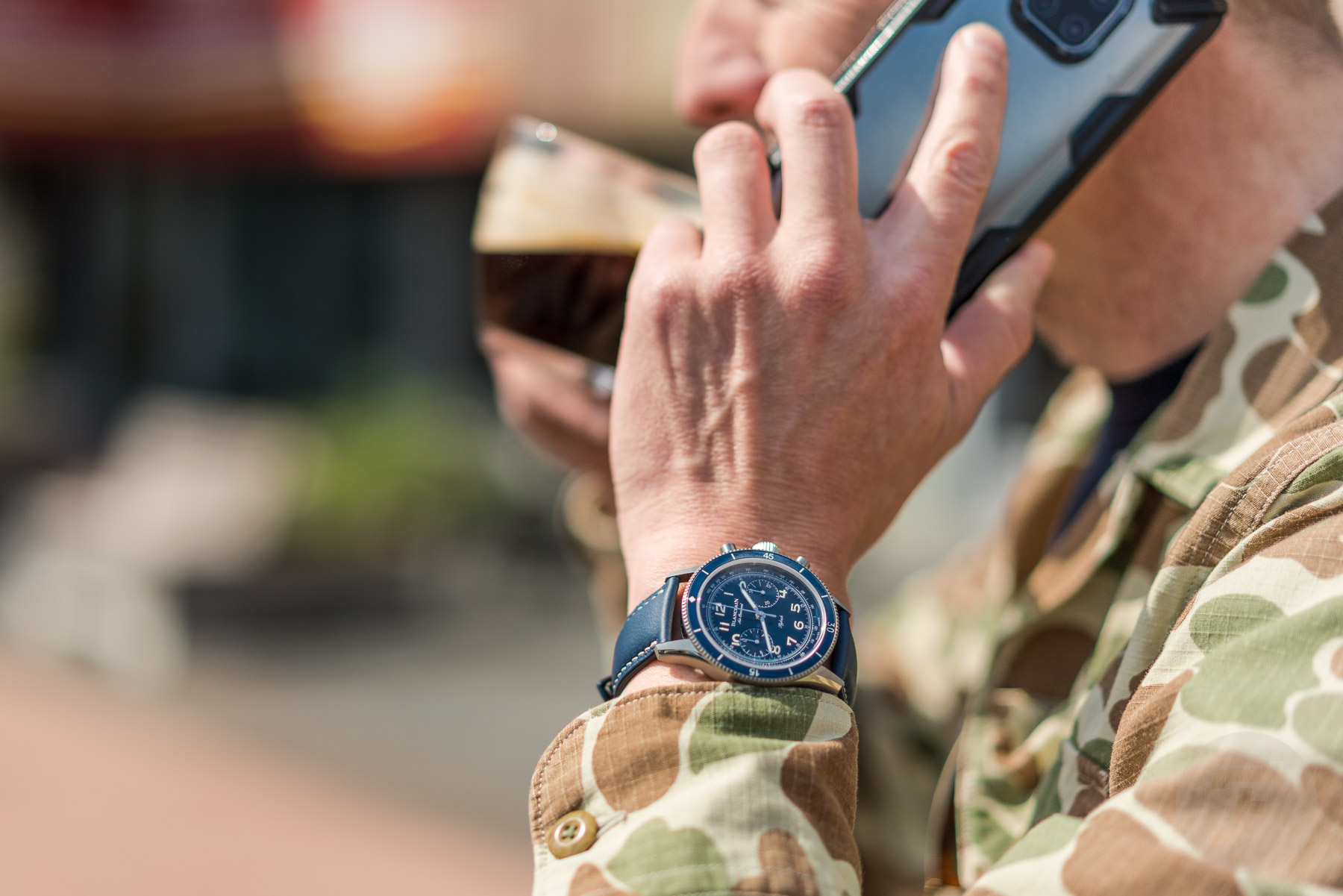 So, this is going to be an uncharacteristically short historical round-up because nobody knows too much about the Air Command’s origins or the exact reasoning behind the design. What we are pretty sure of is that the original “release” was simply a 12-piece proof of concept delivered to the US Air Force, having been commissioned by Allen Tornek. You might remember seeing that name on the famous “Tornek Rayville” Fifty Fathoms variants he had printed up for the US market in his role as the brand’s US importer and distributor. 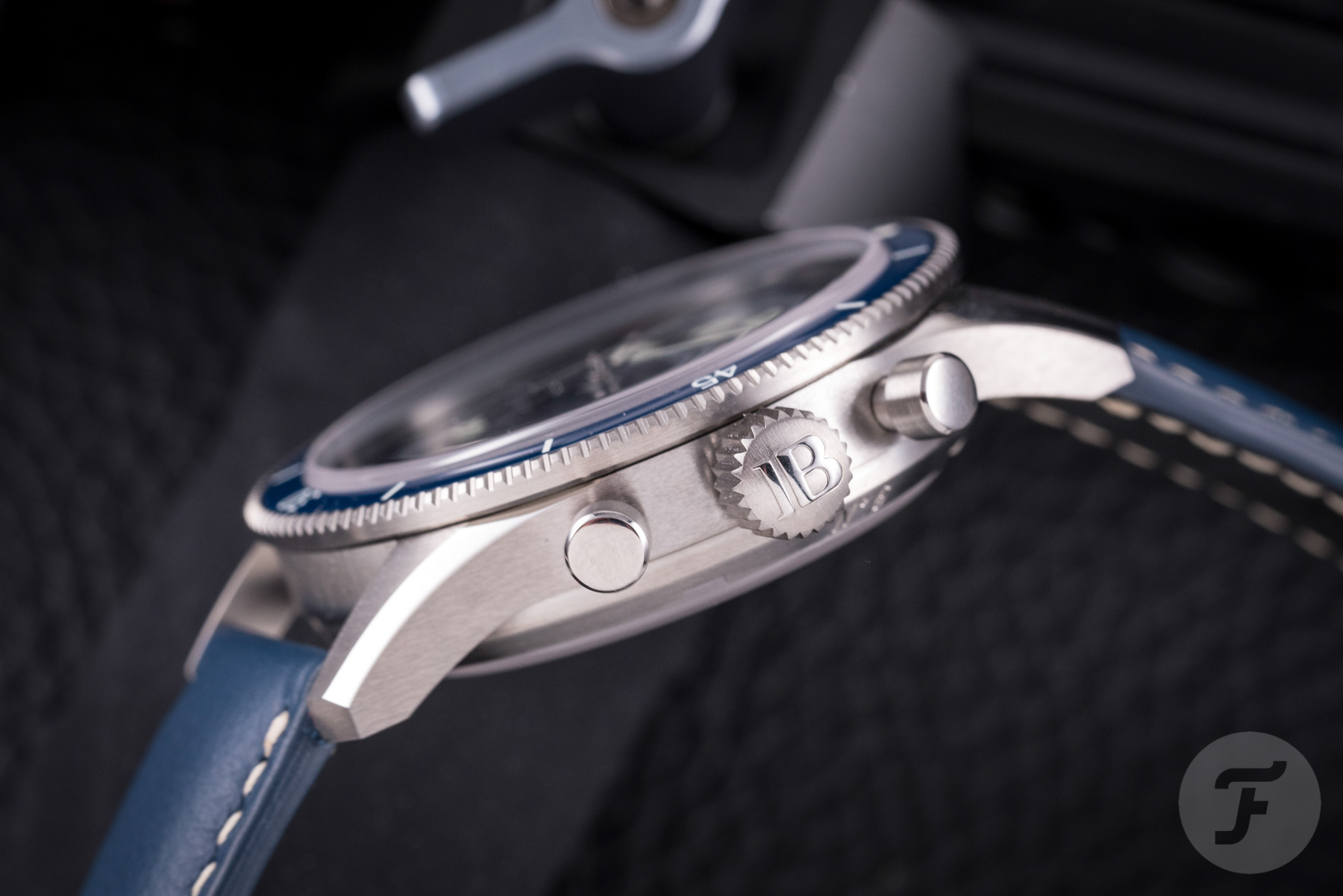 The original Air Command (whose name is also rumored to have been a suggestion of Tornek’s, having been inspired by a 1955 film entitled Strategic Air Command) never made it to serial production and, instead, fell into the mists of time. Over 40 years later, in 1996, the Air Command name made a comeback in the Fifty Fathoms Trilogy series. However, those pieces, which stayed in production until 2003, featured 40mm divers’ cases and bezels. In fact, it wasn’t until 2019 that Blancpain brought the Air Command back with a case and a look all its own. 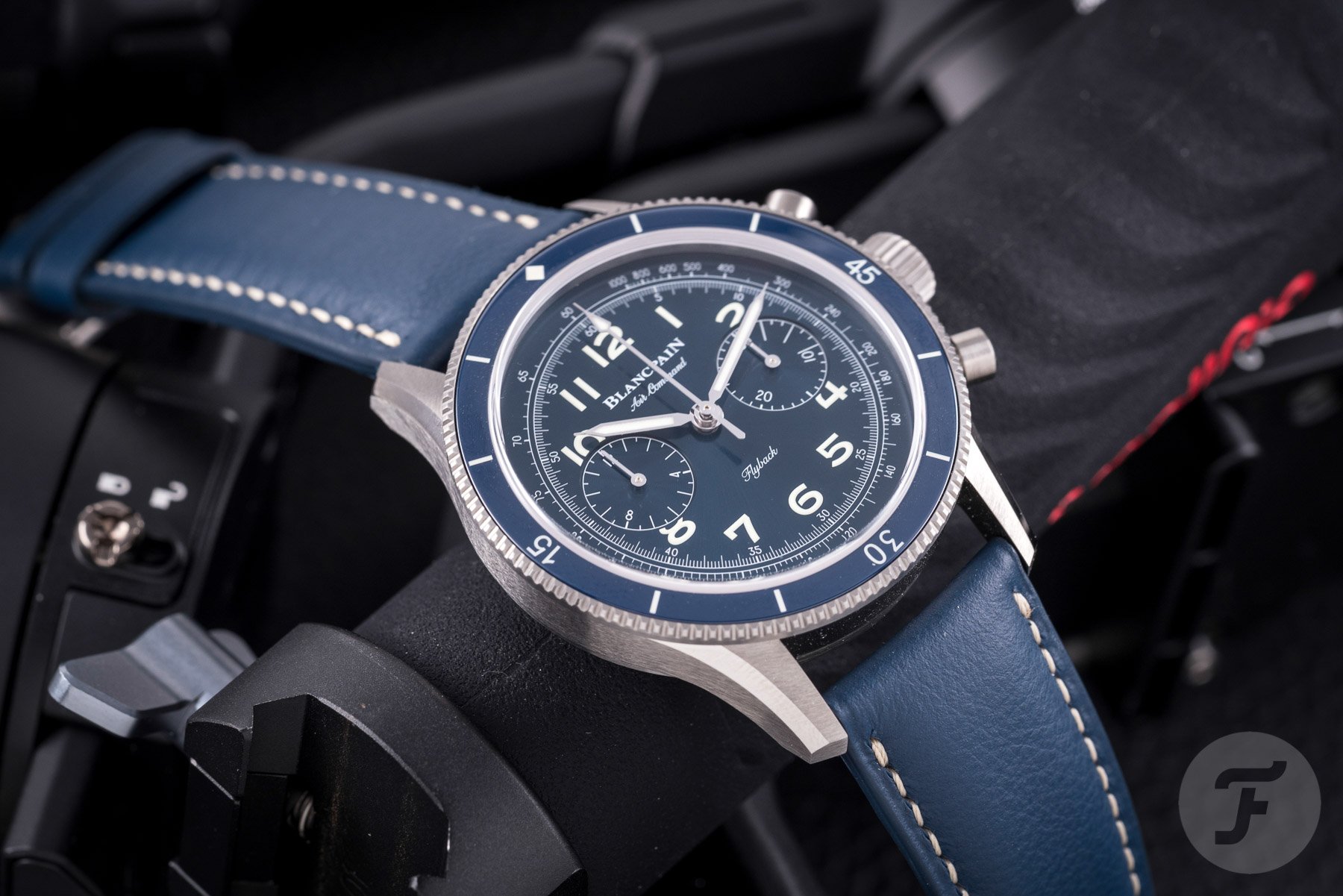 That version of the Blancpain Air Command Flyback Chronograph was one of the better reissues of recent years. In fact, from the dial-side, at least, I’d say it ranks in my top two. The other? The Breitling AVI Ref. 753. Both models have a really authentic feel to them, and, as a fan of the old “fauxtina” lume, I couldn’t be happier with their aesthetics. 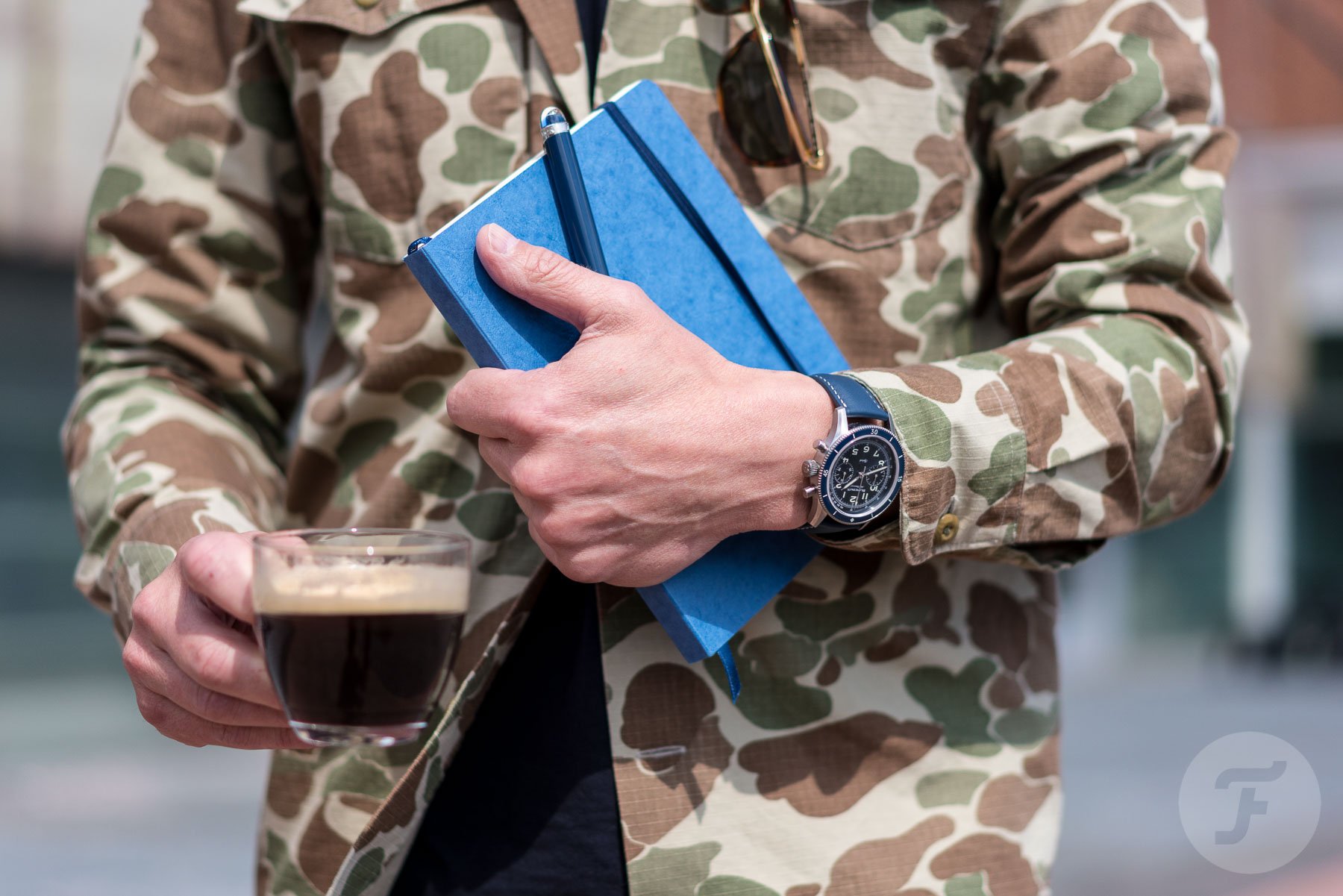 There were several nice callbacks to the original included in the 2019 release. The extended minute markers on the chronograph sub-register at 3, 6, and 9 remained. The watch only increased in size by 0.5mm (a slight change that works wonders for the overall legibility). The lug profile and pusher shape (although not position) remained very similar. The pusher position shifted slightly due to the new movement, which, while a massive upgrade on the original, had one major drawback, in my opinion… 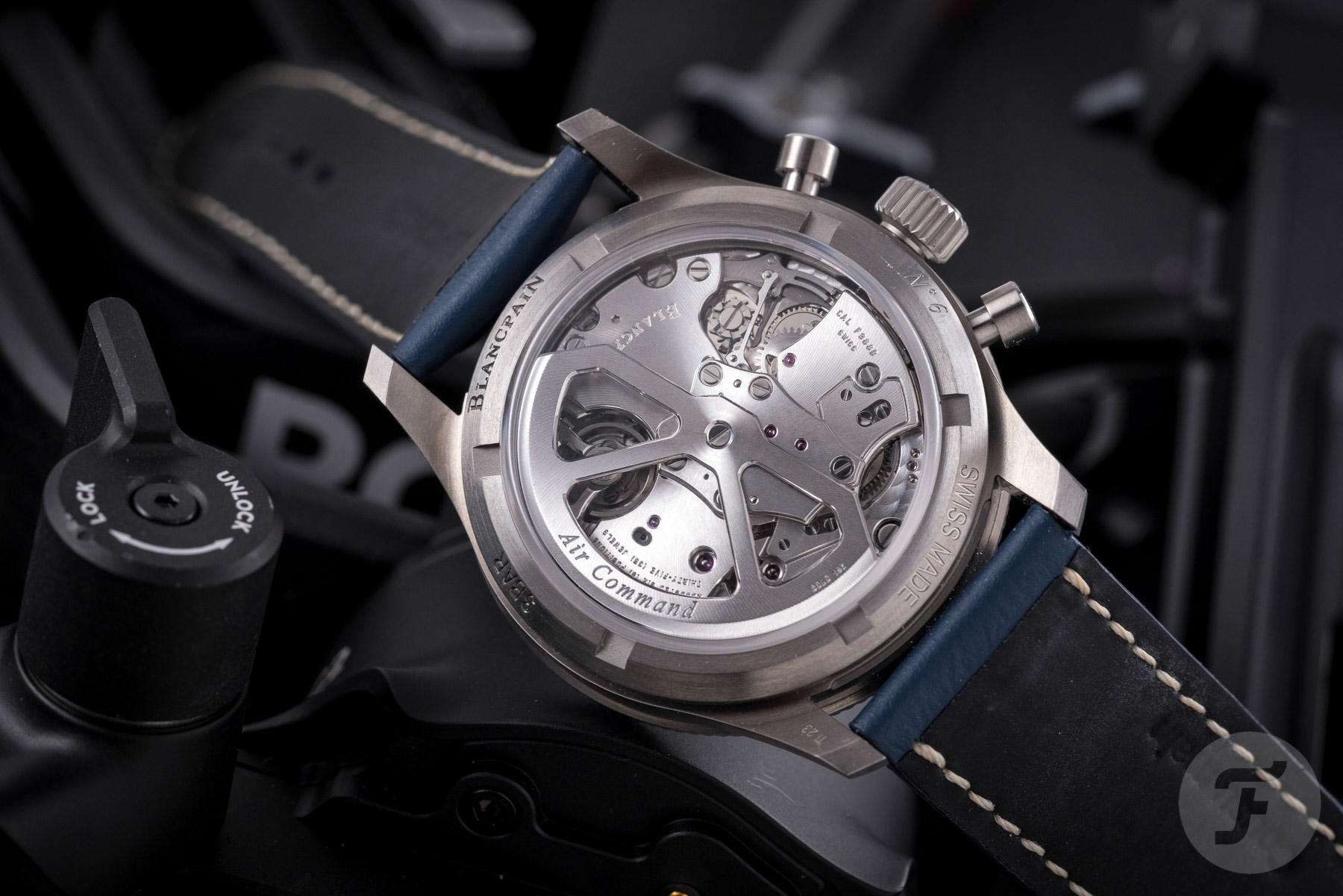 The Blancpain F388B caliber is a stunning horological accomplishment, of course. It is robust, reliable, and as well-finished as you could ask a luxury flyback chronograph to be for under 20K. However, on the 2019 reissue, the rotor weight was styled like a propeller. If you think that sounds a little “in your face”, try this: it was made in rose gold, too. There was no way you could miss it. A smart, industrially-styled flyback engine with 297 components and a 50-hour power reserve was summarily ruined by the novelty winding weight. 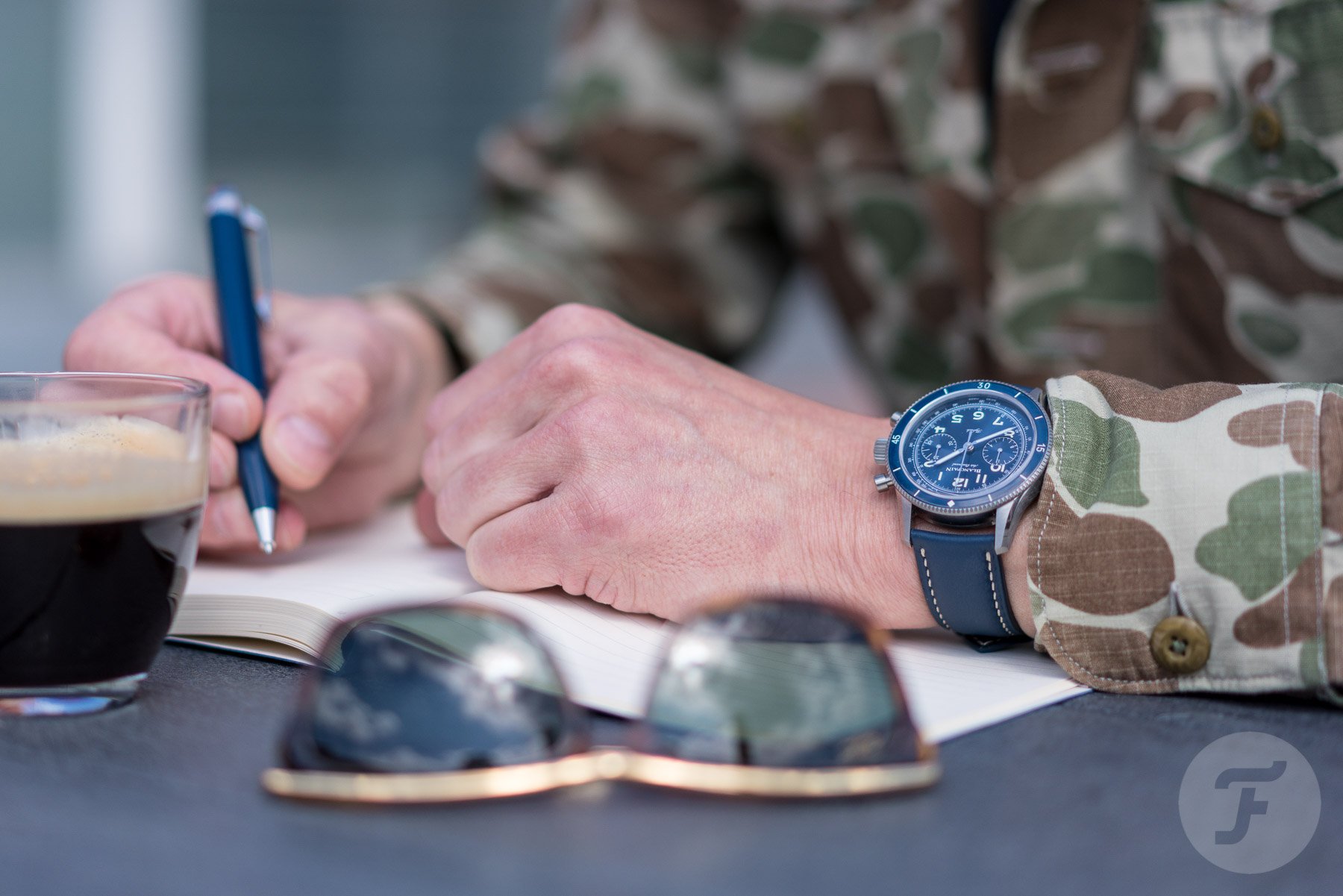 From the front, the 2019 Blancpain Air Command Flyback Chronograph was just about as delicious a redo as I’d ever seen. The back, however, switched me off immediately for the simplest of reasons. Now, of course, I am not “right” in this assessment. It is simply my opinion. While that element turned me off from buying one, it may well have turned on differently-minded folk. 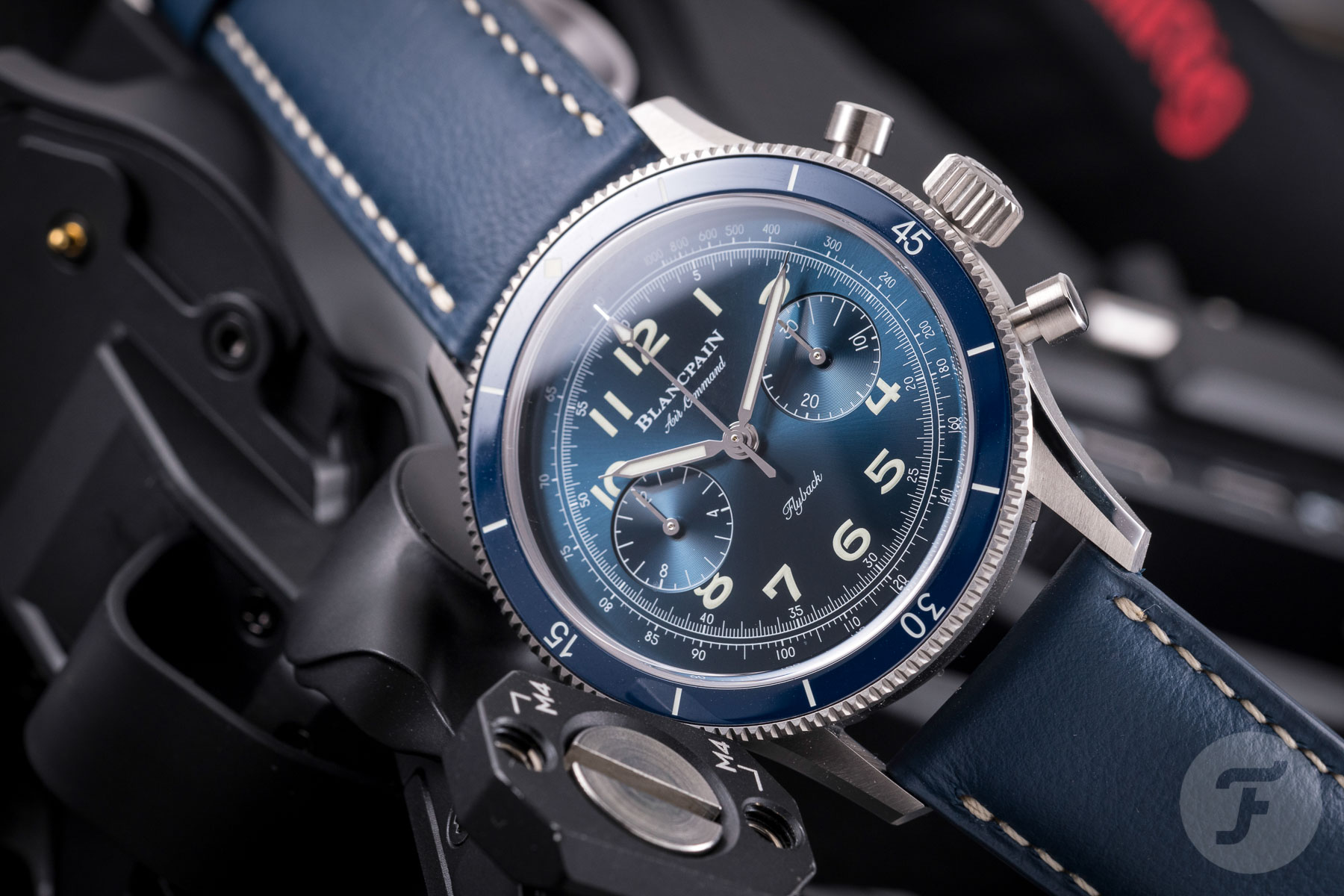 My reasoning, however, is less subjective. As far as I see it, the Air Command is a tool watch. I like the idea of it even having a closed case back. I know that wouldn’t fly at this price point, per se, but it makes more sense to me than a novelty rotor. What would make less sense than a closed case back (hiding a soft iron anti-magnetic cage, for example) is at least an oscillating mass that matches the rest of the caliber aesthetically. Well, I can only dream, eh? 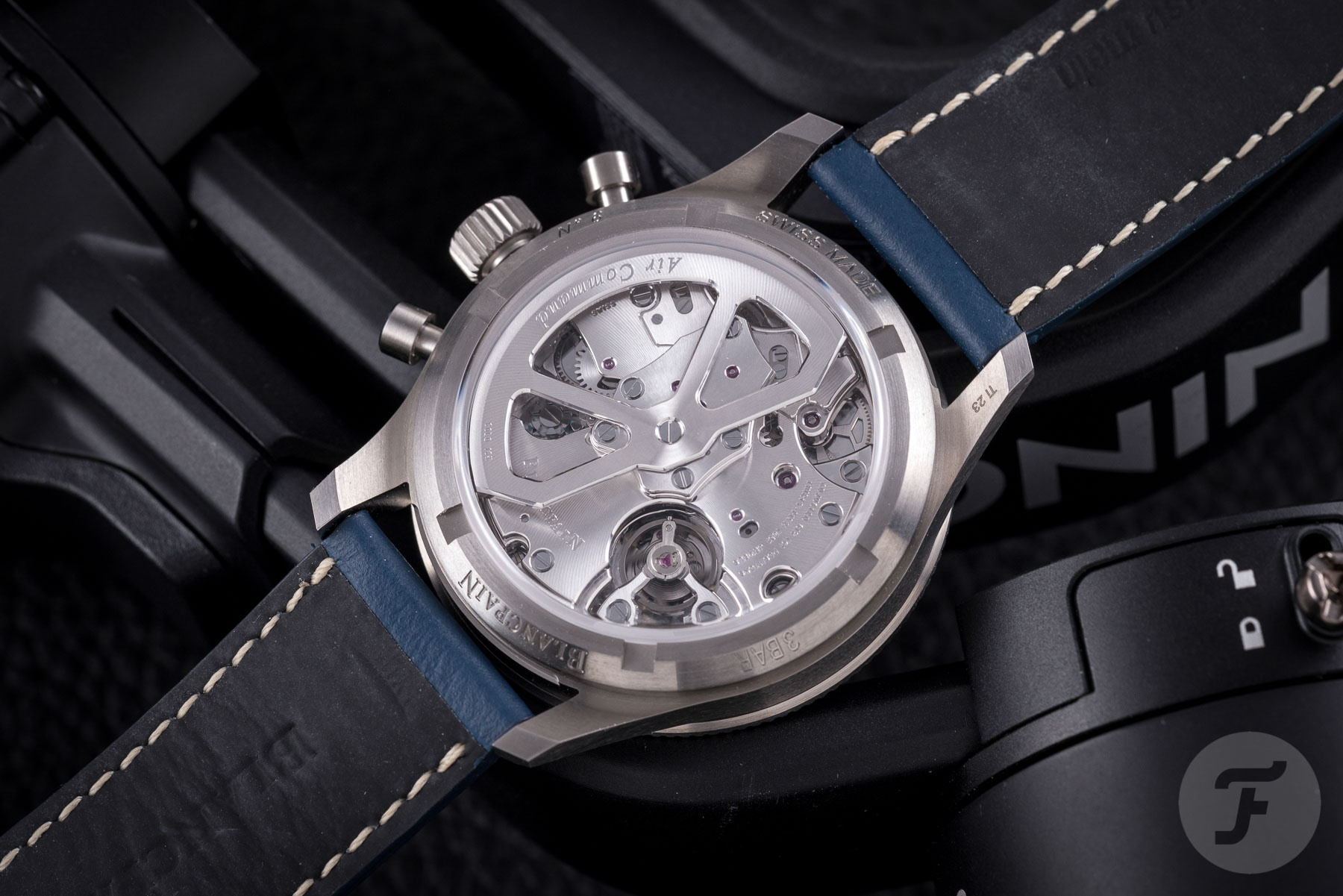 Oh, sweet mercy. Blancpain has done it. I had nothing to do with this change, so when I say the brand “listened to me,” I’m talking about the sound of my muttered prayers that I can only imagine were carried to the ears of the brand’s designers on the wings of sympathetic angels. The result is, therefore, just as heavenly as one might expect. Personally, I find this change thrilling, and while I may still prefer the black colorway over the blue from a purely aesthetic perspective, I think the blue bosses the black as an all-around concept. 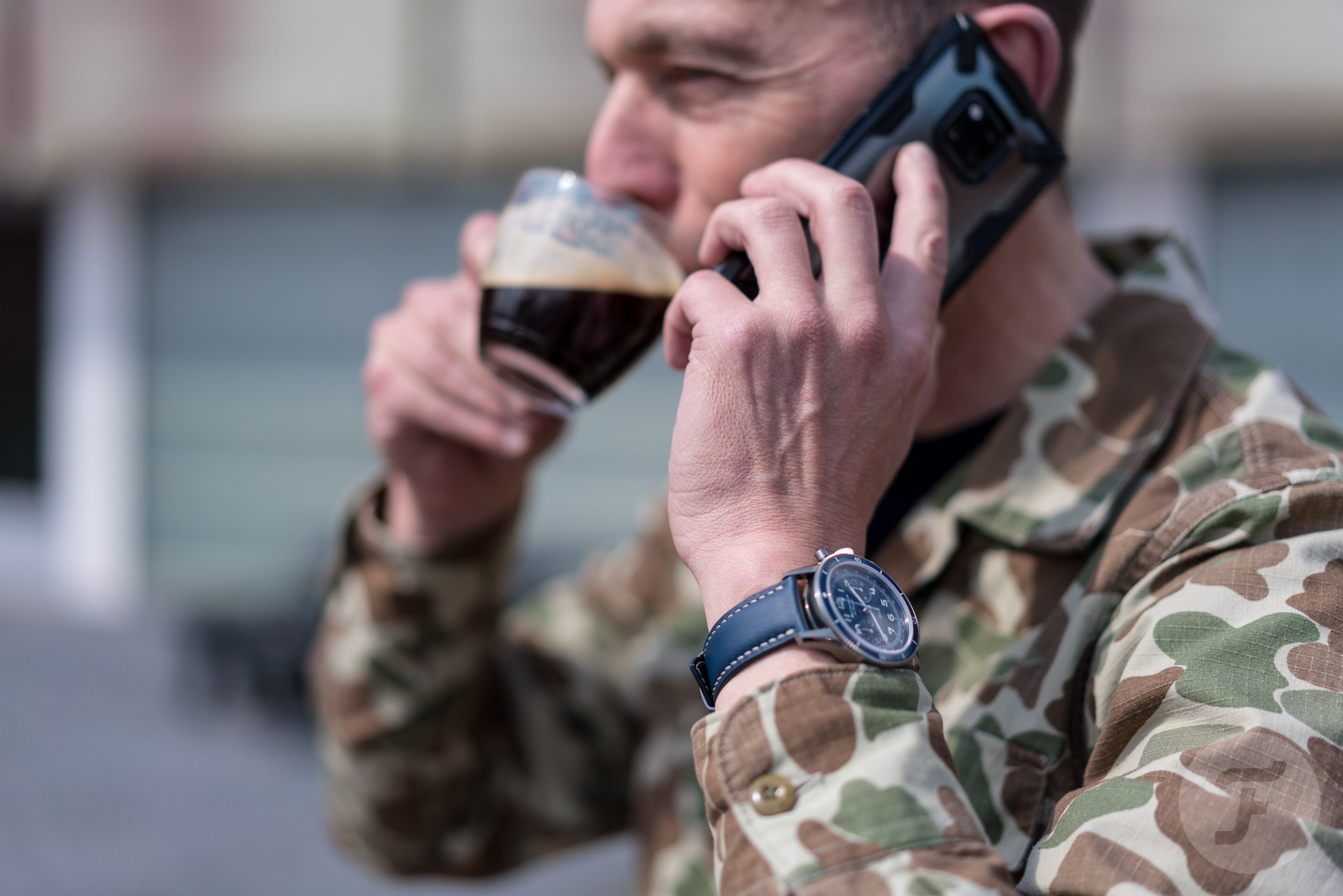 Looking back but looking forward

This 42.5mm wide, 13.7mm thick Grade 23 titanium-cased beauty is available for “just” CHF 17,900. If you are wondering what Grade 23 titanium is (I was), it is similar to Grade 5 but has lower oxygen, nitrogen, and iron levels. Apparently, it has better ductility and fracture toughness than Grade 5. By the looks of it, it can also handle an incredibly refined finish. It’s a great choice for this watch. While steel may have been the choice of the original, this is a fine update in my opinion.

I love the movement. I love the case size and its wearability. Additionally, I think the fact there is a scaled-down 36.5mm version (powered by the F188B caliber) makes the blue-dial Blancpain Air Command one of the best under-the-radar “couples'” options out there.

Only one thing about this watch annoys me. Interestingly, it’s nothing to do with the reissue’s authenticity. Rather, it is entirely to do with what the brand perhaps should have changed. I know it’s a pilot’s watch. I know it’s a chronograph. But in 2022, I would expect more than 3 bar water resistance from a watch of such refined construction retailing for close to 20,000 Swiss francs. Furthermore, a screw-down crown wouldn’t go amiss, in my opinion. One can always point to the watch’s heritage to justify these decisions, but, really, I think part of watchmaking’s responsibility en masse is to provide proper material upgrades wherever possible while retaining the aesthetic inspiration. 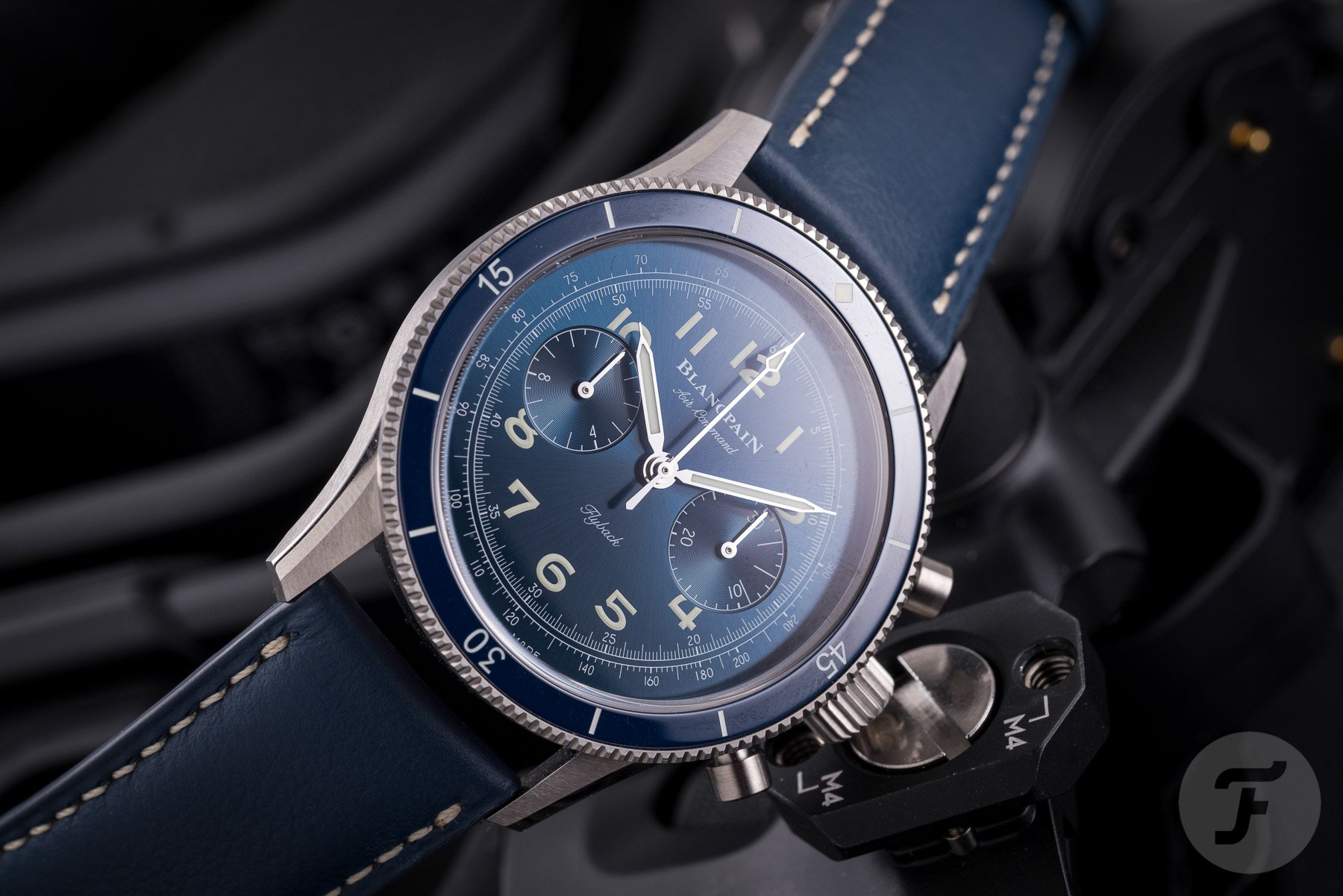 I got into a right barny with some of the Fratelli once for complaining about fixed spring bars on a military-inspired reissue by CWC. The Fratelli tearing me to shreds had a point (which I immediately conceded): the fixed bars were authentic. But I think I had a point too: they were naff. If the industry wants to mine its archives for cool styles deserving of a redo, that’s cool.

My advice, however, would be to redo the piece from top to bottom. Hopefully, this opinion of mine will strike a chord with some of you and rankle others (because what’s more fun than a good old debate in the comments section?). Let me know what you think about absolute design fidelity at the expense of technical improvements. Feel free to share your (respectful) opinions, no holds (spring)barred. Learn more about Blancpain and the Air Command here.

Hot Topics
Introducing: The New Seamaster Professional 300M 60 Years Of Bond — With A Special Animated Case Back
105 comments
Are You Still After An Omega × Swatch MoonSwatch?
98 comments
Introducing: The Oris Divers Sixty-Five Fratello Limited Edition
77 comments
It’s Time To Invest In A Dress Watch — Our Picks From Breguet, Omega, Grand Seiko, And More
73 comments
The Rolex Waitlist Conundrum — How Much Will The Price Of Your Watch Increase While You Wait?
50 comments
Popular
Rolex GMT-Master History And Overview Of All Major References
Robert-Jan Broer
18
Why You Can’t Go Wrong With The Rolex Datejust
Robert-Jan Broer
5
Hands-On: Breitling Navitimer 1 B01 Chronograph In 43mm
Robert-Jan Broer
3