Finally! I have kept my eye on the awkwardly bold Ball designs for quite some time. And, at long last, I got the chance to see how the H3 micro gas tubes glow in real life. I chose the GMT model with the “Pepsi“ bezel — the Ball Roadmaster Vanguard.

If you have ever tried to take a lume shot, you know very well that the actual intensity is easy to cheat on in a photo. Many lume shots we see show amazingly glowing dials. It can really suck you in. Sometimes, people base their purchase decision on just that. And then they receive the watch. Sadly, reality often lags way behind expectations. It’s simple. You just set a longer exposure time on a camera and the result will be super bright lume. So the question is, how strong is the illumination of the special H3 micro gas tube technology used on the Ball Master Vanguard? 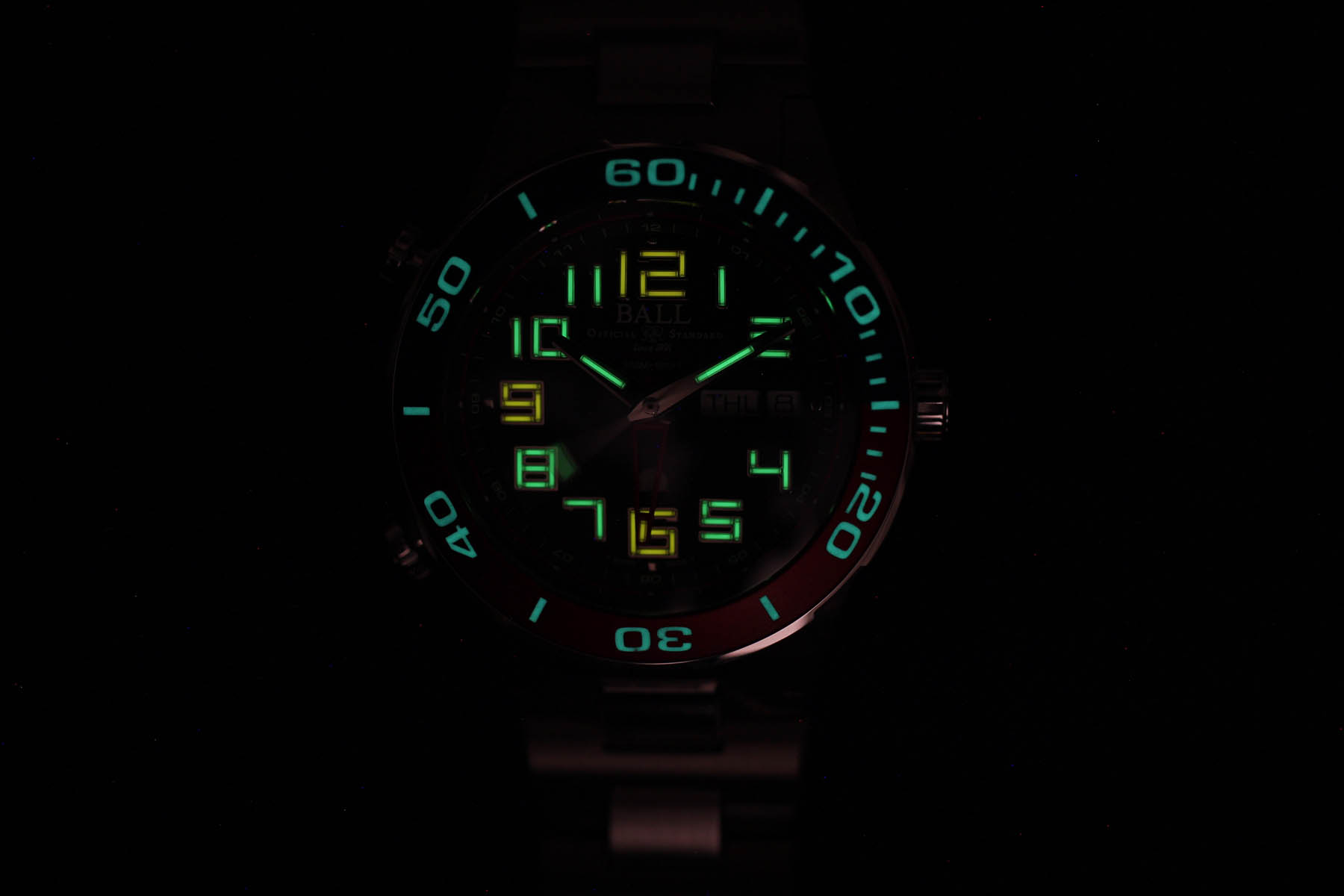 I don’t think I need to say more to illustrate the effect than the following story: my wife never sends me pictures of modern watches I take for hands-on reviews. She has never sent me a single one. The day after the Ball Roadmaster Vanguard arrived, I left it at home as I didn’t have time to adjust the bracelet. I was in the middle of a meeting around noon when I got a message from my wife with a picture of the Vanguard saying, “Did you notice how this glows?!“

Well, I did indeed. I was immediately fascinated. It’s different from anything I have seen before. Standard lume has a kind of a delay until your eyes “re-adjust“ to it, but the Ball comes up immediately. The overripe lemon yellow combined with a polar green adds to the unique experience, also. While the size of the numerals might come off as irritating in daylight, in the dark it’s like a gift from the heavens. It’s very different from what are we used to and it’s daringly cool. 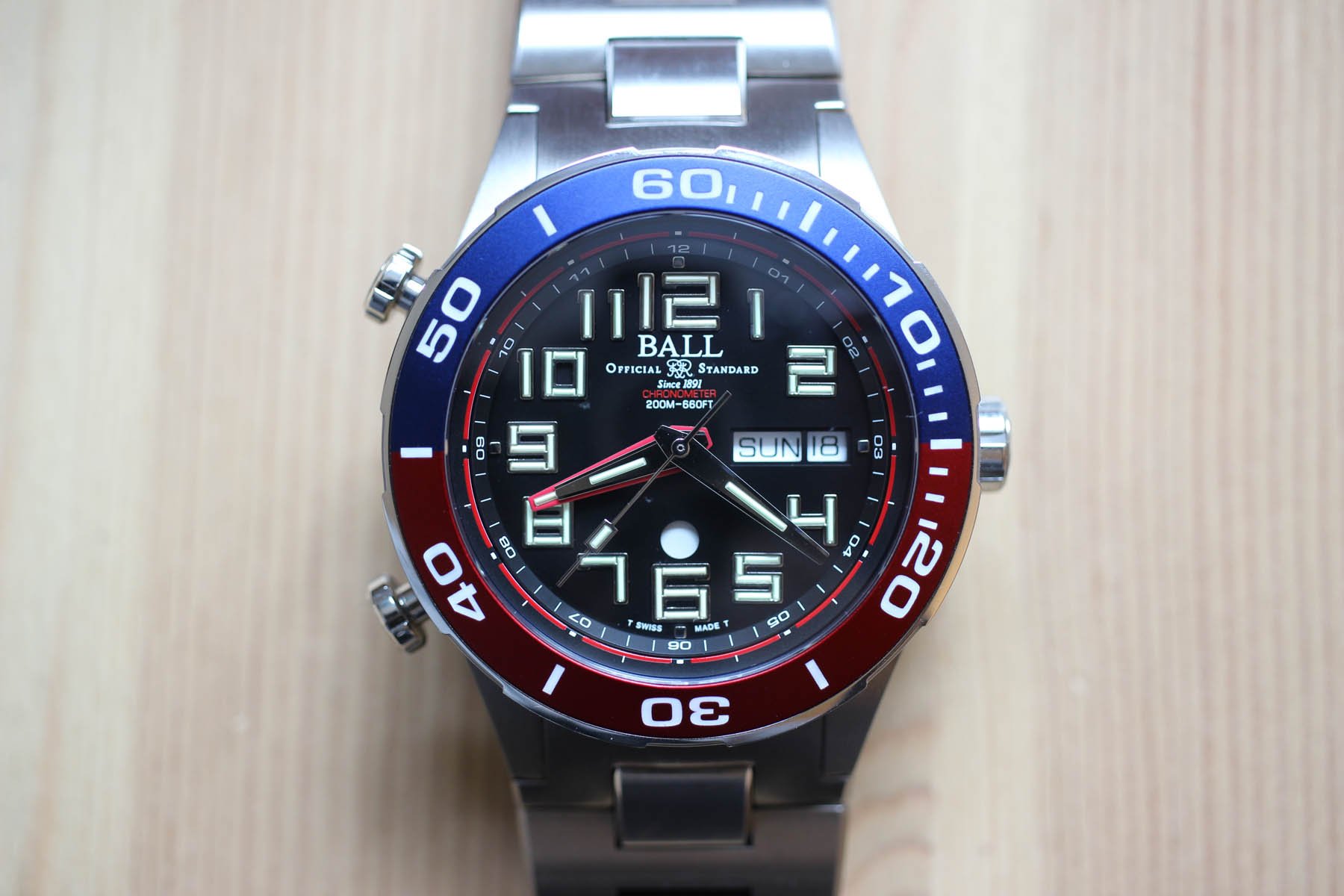 There are 48 of them and all are self-powered. The pure tritium gas is sealed in a hollow mineral glass tube, while the interior walls are coated with a luminescent material that gives off a cold light when activated by the electrons emitted by the tritium. It is much in the same way a television screen functions. The small, precise, lightweight H₃ gas tubes are efficiently produced by means of a CO2 laser.

The tubes are then attached to the hands and the dial in a secure manner that precludes any risk of breakage. The wearer of a complete and intact Ball watch is not exposed to any radiation. We know that the tubes don’t need to be energized by the sunlight, but what we don’t know is how long their effect lasts. Ball says that it should last at least 20 years. Unfortunately, Ball wouldn’t let me keep the watch sample for that long to prove it. 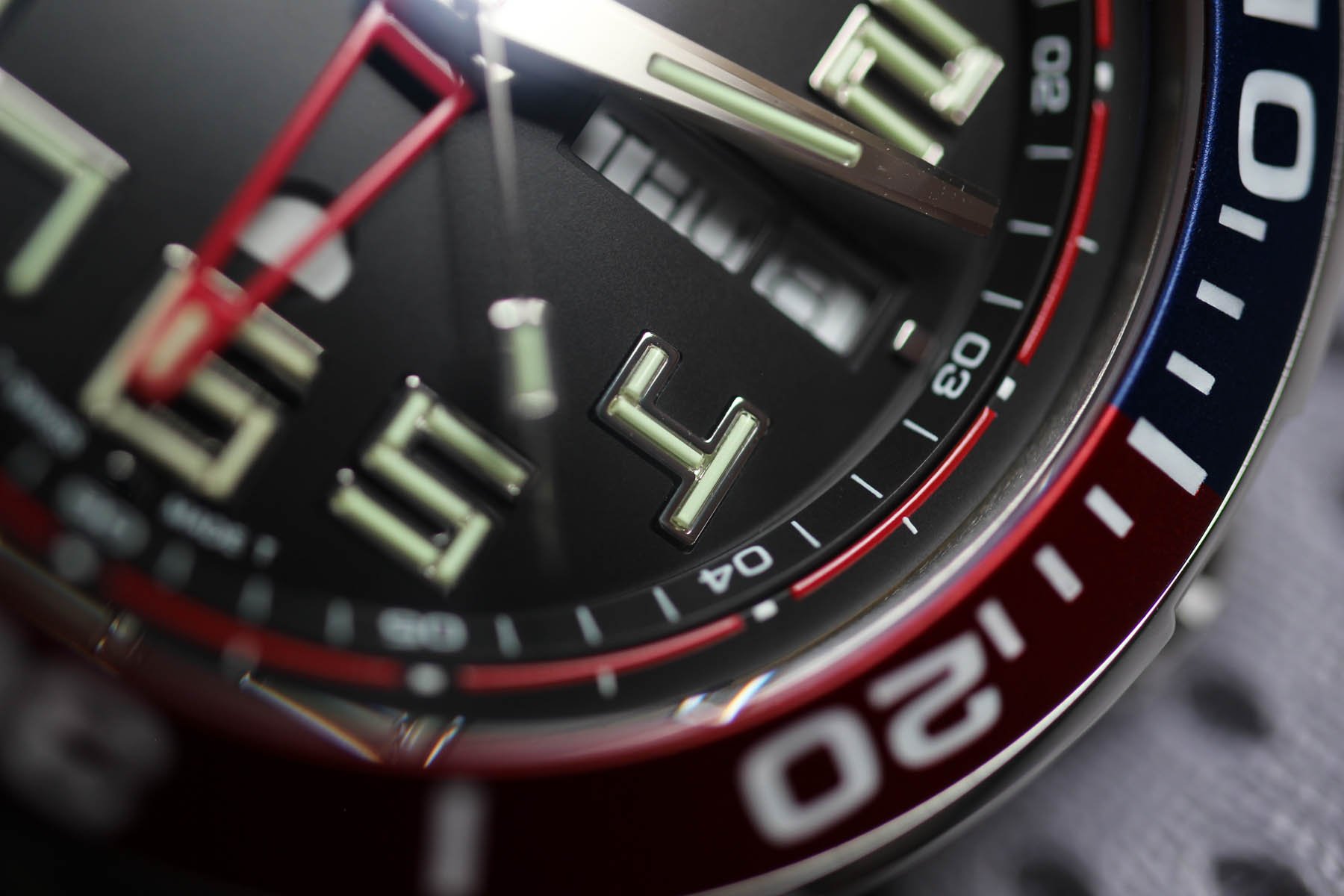 Tubes under the loupe

Even during the daytime, watching the microtubes is a stunning experience. The pale tubes of glass look like tiny sprinkles arranged on a donut by some obsessive artist that loves sports typography. The numbers that look like they were cut from a jersey of your favorite sports team are sitting tightly next to one another. The 12 and 6 numbers are slightly bigger than the rest. It doesn’t feel disturbing or disproportionate on an otherwise quite heavy dial. On the contrary, it gives it quite a dynamic feel.

The case and bezel

It’s high. Or no, I just changed my mind. The “problem“ is not that it’s too high, but that the dial sits very deep in the 40mm titanium case. It might be unusual at first glance, but it doesn’t mean it’s bad. I guess the tubes have some height and so the hands can’t glide too close to one another. The clicking Pepsi bezel rotates in one direction and surprisingly doesn‘t show the 24h track, but rather a 60-minute countdown track. Weird? Indeed. But stereotypes are meant to be broken. You are to be the judge if it’s good or bad in this particular case. 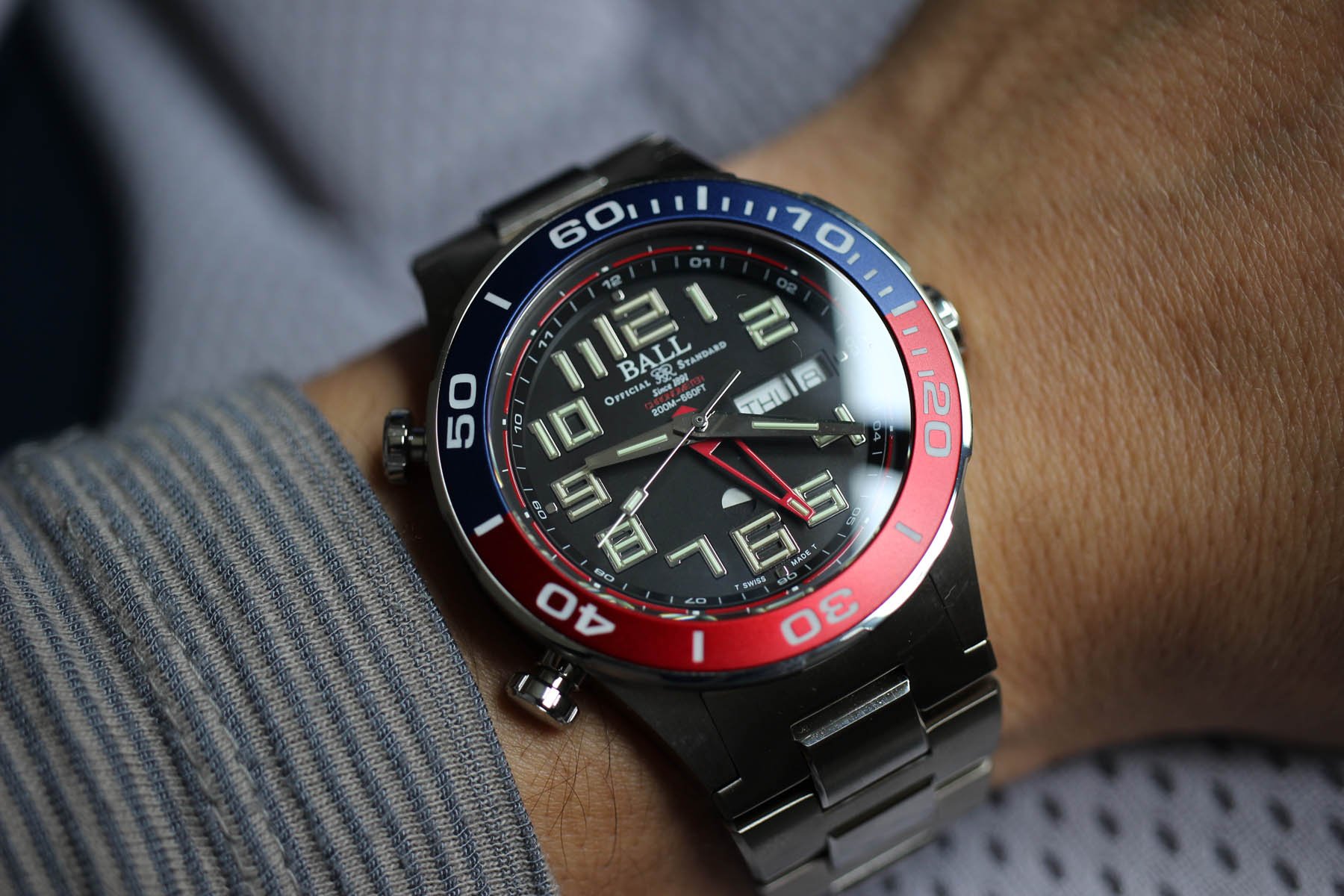 Time for the GMT

The Pepsi coloring brings us to another notable detail on the dial, which is the red extra hand. While typically a GMT hand comes just as a thin stick with an arrow or a triangular tip, Ball decided to make it a full hand. It mimics the hour hand, but it’s just a bit enlarged. I like that it’s just skeletonized with a short gas tube sitting on the tip. I have to say I really like it, as it reminds me of the roll cages found in rally cars. It’s minimalistic and it doesn‘t draw too much attention, but at the same time, it’s perfectly legible.

The most charming feature of the Ball Vanguard comes when you hide the GMT behind the hour hand. To be precise, you don’t hide it, as it is designed in a way that it creates a kind of an outline of the hour hand. The effect is quite stunning. I can already see the smile on your face when you see it moving along with the hour hand for the first time.

How do we operate the GMT hand? Forget the crown. The crown is quite busy operating the time and generous day/date windows. By the way, isn’t that too much? I couldn’t make up my mind, but after two weekends I realized the Vanguard has the kind of design that no matter what you add to it, it will never look too heavy or busy. That’s the so-called “CASIO effect”, but back to the GMT hand operation… 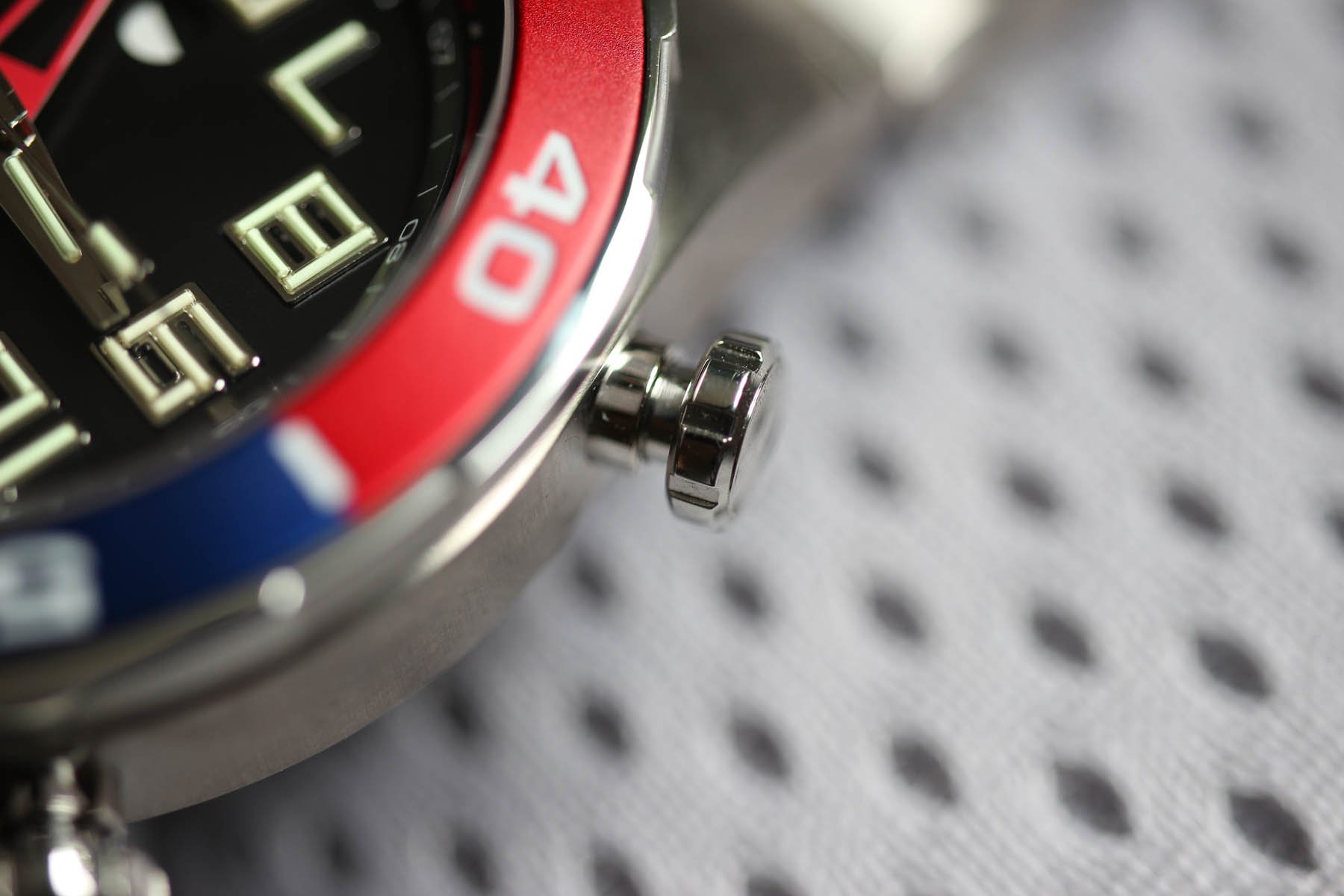 Note the two pin pushers. Aren’t they lovely? Ball patented them as they are quite novel. The upper one sends the GMT one hour ahead, the bottom one moves it back. I admit it’s much faster and safer than a crown operation, but did we need two of them? The pushers also have a locking position. To lock them, you just need to rotate them a bit. This prevents an unintentional GMT reset. To rotate the pusher, however, is a bit more cumbersome. Especially as you are never sure if you jumping to a free or the next locking position. But training helps. After two weeks, I was switching like a pro. 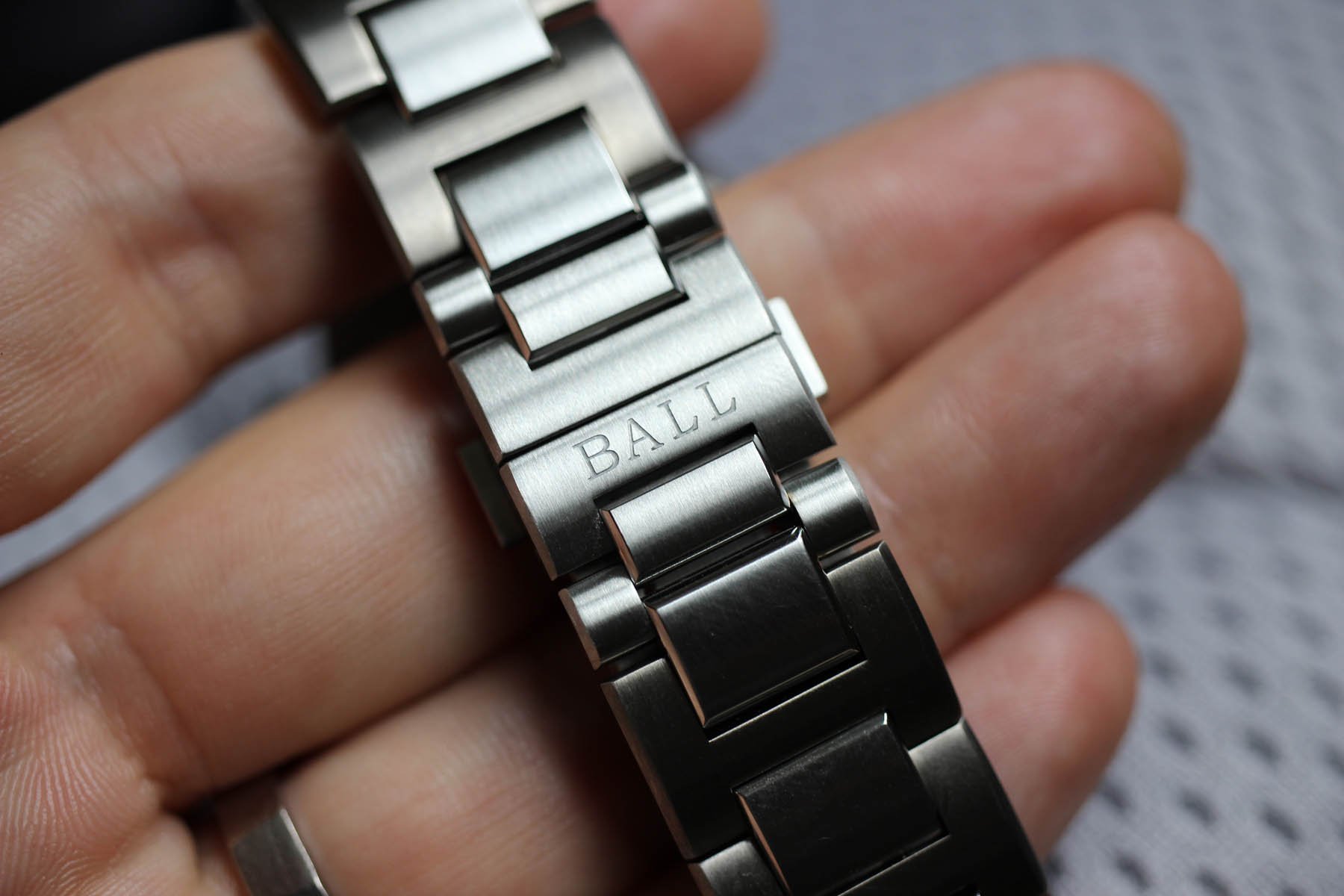 The day/night indicator above six o’clock is another nice detail you won’t find in your everyday watch. I really enjoyed the bracelet with its (patented) 18mm wide clasp. The bracelet, just like the case, is a combination of titanium H-links and steel center links. Mind that the bracelet doesn’t fold completely at the end link, so the lug-to-lug size is optically larger than the declared 47mm. The automatic Ball RR1303-C caliber is an in-house modification of an ETA base caliber. It’s certified to COSC Chronometer specs, which is also declared by the red inscription on the dial.

It’s massive in its construction, but I wouldn’t say it’s extra big. Even with the bezel bleeding slightly over the case, it’s still under 42mm in diameter. It wears comfortably and that’s really key for me. The effect of the H3 micro gas tubes really got under my skin and I will lookout to see if Ball offers something smaller around 38mm in the future. If you are looking for something unusual and expressive, you might consider putting the Ball Roadmaster Vanguard on your shortlist.

Hot Topics
Introducing: The Omega Speedmaster Super Racing With Spirate System
165 comments
Design Vs. Specs — Which Is More Important To You When Buying A Watch?
87 comments
New Release: The Limited-Edition Seiko Prospex SLA067J1 Diver
59 comments
My Predictions For New Omega Speedmasters In 2023
57 comments
The Time To Buy Is Now: How The Current Economic Climate Influences Watch Buying And How You Should React
51 comments
Popular
(From The Archives) Shut Up & Read The Truth About Cartier Watches
George Cramer
21
The Omega Seamaster Diver 300M Returns – On The Wrist Of Daniel Craig
Paul Dezentjé
17
Top 10 Best Watch Bracelets
Robert-Jan Broer
61