When it comes to beer, I generally favor brews from the smaller companies. These brewers offer beer styles and flavors that often appeal to less people overall, but provide a greater amount of satisfaction to a select group of drinkers. The other note about these brewers is that they were once but a tiny part of the marketplace, but times have changed. This is kind of how I feel when it comes to micro branded watches. No single brand is large enough to disrupt the “big boys”, but taken as a whole, they’ve caused many of the larger players to sit up and take notice. Numerous examples exist of famous brands dabbling in marketing or by offering pieces made out of material (read: bronze) that only the micros would have considered. Heck, even our favorite Omega Speedy Tuesday was offered solely through social media. But coming back to the topic, the micros possess the agility to take risks and make some watches that are likely for a rather specific target audience. Today, we take a look at one such piece in the Straton Speciale. 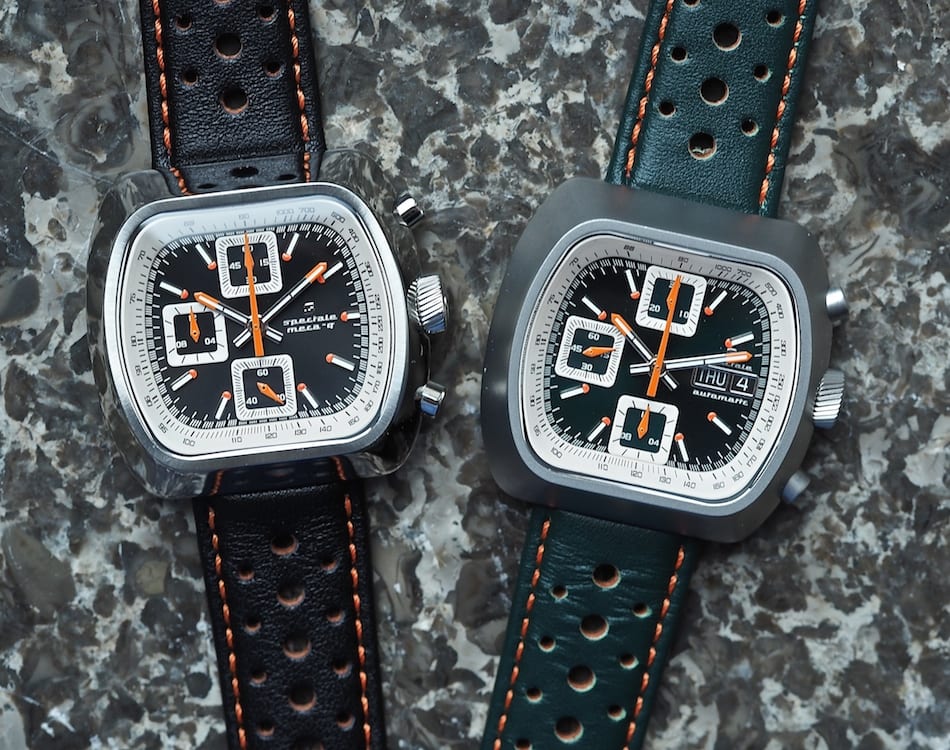 Another Release from Straton

About a year ago, we took a look at the Straton Syncro and came away impressed by the watches due to their impressive detailing, overall quality, and affordability. Now, owner Kyle Schut is back with a decidedly different, but still retro racing inspired, chronograph. Like the Syncro, the new Straton Speciale is available in a wide array of case finishes (polished, matte and PVD) and also with either a quartz or mechanical movement. The well-known Seiko meca-quartz movement remains, but in a cool twist, Kyle was able to score a really nice deal on a batch of Valjoux 7750 automatics. 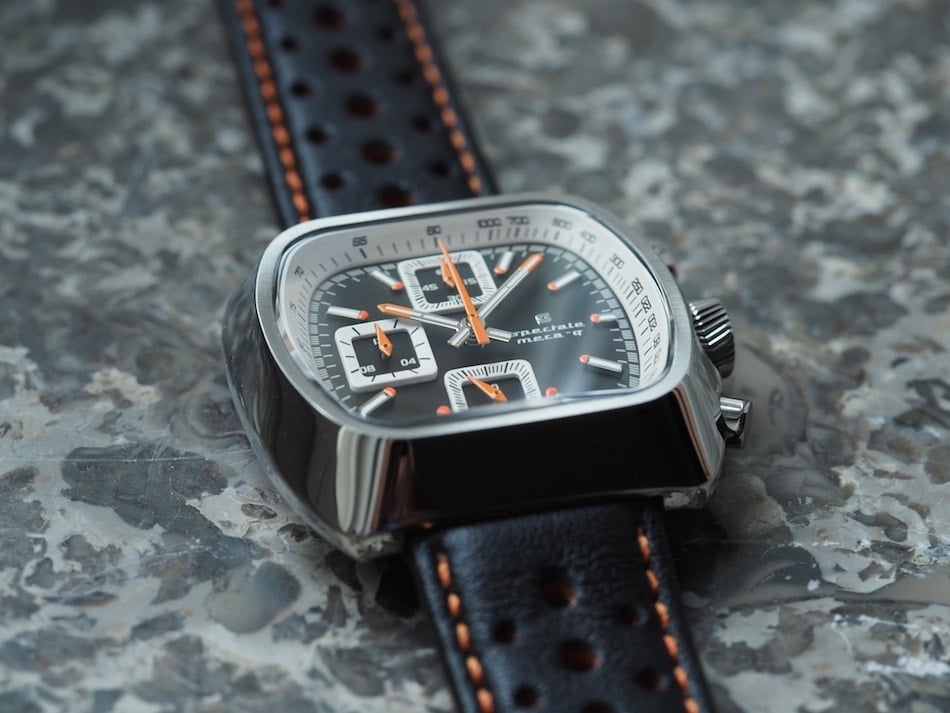 The Straton Speciale is an audaciously designed watch. It’s pure 70’s and one could pull in everything from the TV-shaped Omega Speedmasters to the Heuer Monaco. It’s square-ish, but rounded and as you can see, the internals follow the external form with a rather dramatic inward sloping inner tachymeter bezel. Will this watch be everyone’s cup of tea? Absolutely not, but perhaps that’s not the point. 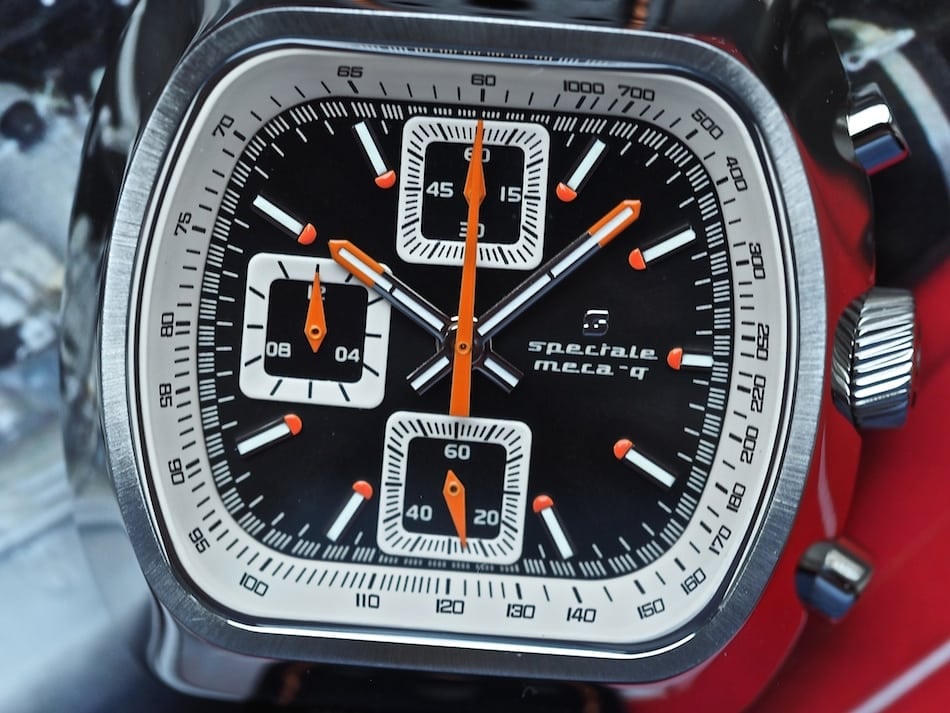 When I first saw renderings of the Straton Speciale, I think it was during Baselworld 2017, I was a bit skeptical. I simply thought it was going so far into the 70’s look that it would find fewer takers than other models, but I was definitely wrong. Upon receiving a couple models – one in quartz and one in automatic – I was once again impressed by the high level of details. 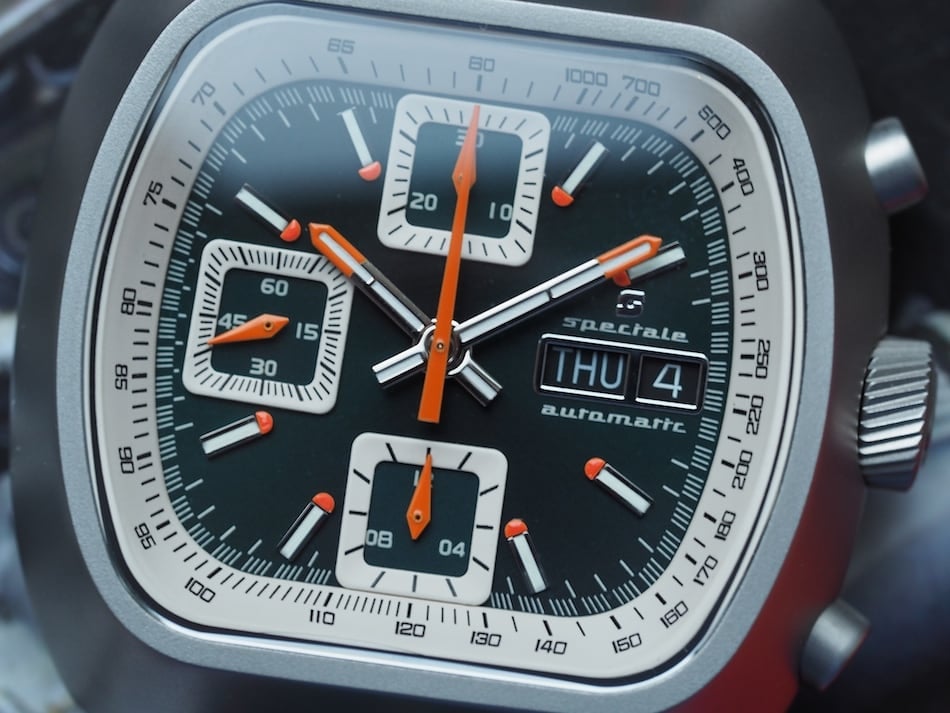 The watches feature strongly contrasting colors, which include the use of white sub register outlines and the aforementioned inner bezel. These play well against both the black and the dark green models I tested. A decent amount of chrome and orange also find their way into the mix. In person, the colors are sporty but restrained enough to keep the watch from coming off as toy-like. 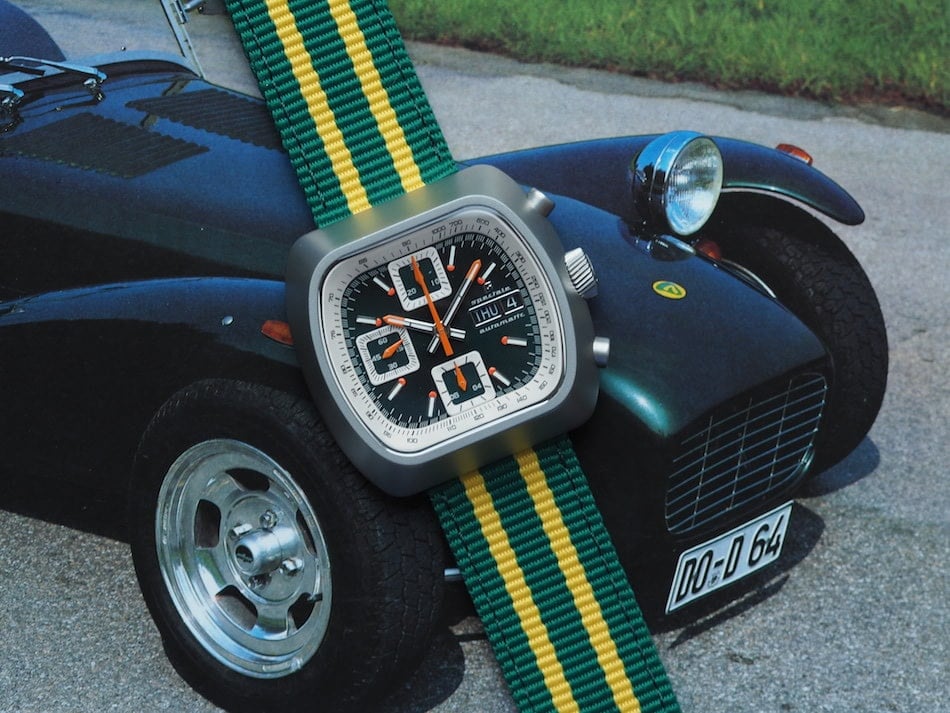 Amongst my watch friends, I’m a noted critic of the Valjoux 7750. I bear little love for 6/9/12 oriented chronographs and I find this Swiss workhorse movement to be a bit of a rough operator. That being said, I’ve owned several and I’ve found them to run flawlessly. So, it’s clearly a proven engine and I think that the fact that a Straton Speciale houses one only adds to the watch’s credibility. Plus, I found this arrangement of sub dials along with the day and date at 3:00 to fit the 70’s aesthetic perfectly well. After all, this movement was born during this period. If there’s one minor complaint, the mechanical movement adds thickness to the case over the quartz version. At 14.9mm thick versus 13mm for the battery-operated choice, the difference is noticeable, but thick and chunky kind of works for a watch of this style. 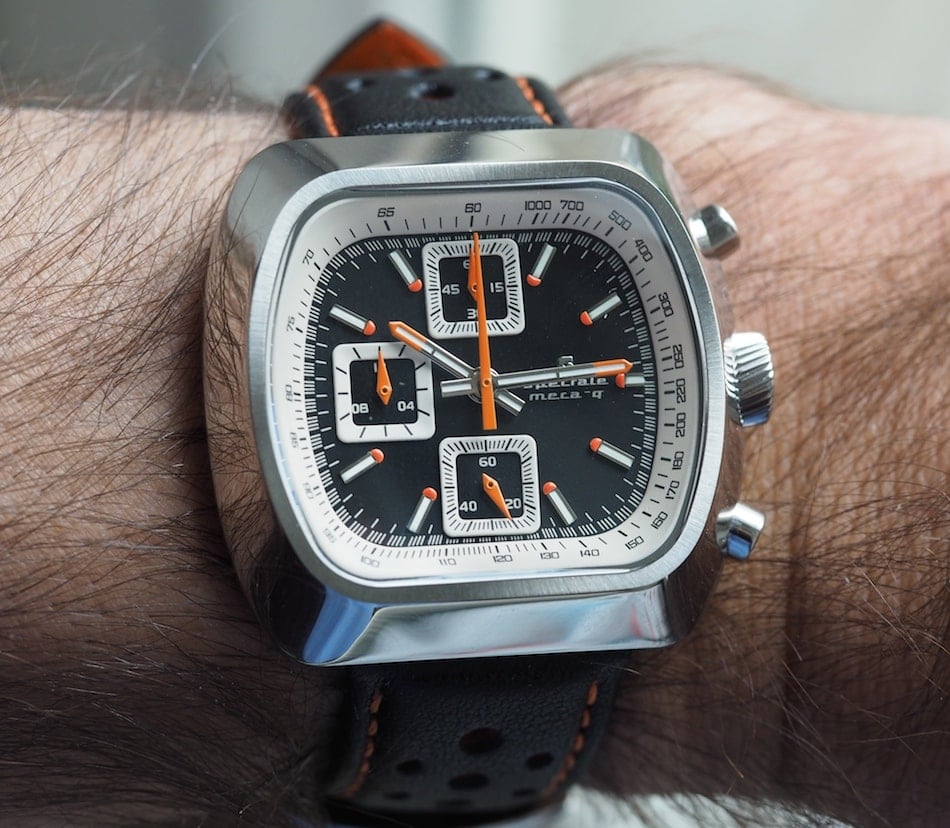 If thickness is a concern, pictures might lead you to conclude that the Straton Speciale is a beast on the wrist. In fact, nothing could be further from the truth. The watch comes in at 42mm in diameter and a very wearable 40.8mm (hidden) lug to (hidden) lug. It’s a great fit for the small-wristed, while also likely satisfying larger watch wearers due to its larger looks. On a 22mm leather rally strap or 2 piece canvas, the watch was really comfortable. A very Heuer Monaco-esque bracelet is available for a very reasonable $50 in either polished, matte, or PVD finish to match the case. Even better, a strap tool is provided to change between the standard canvas and leather straps. Coming back to the meca-quartz version, everything is the same as the automatic, but it is only offered sans day/date. 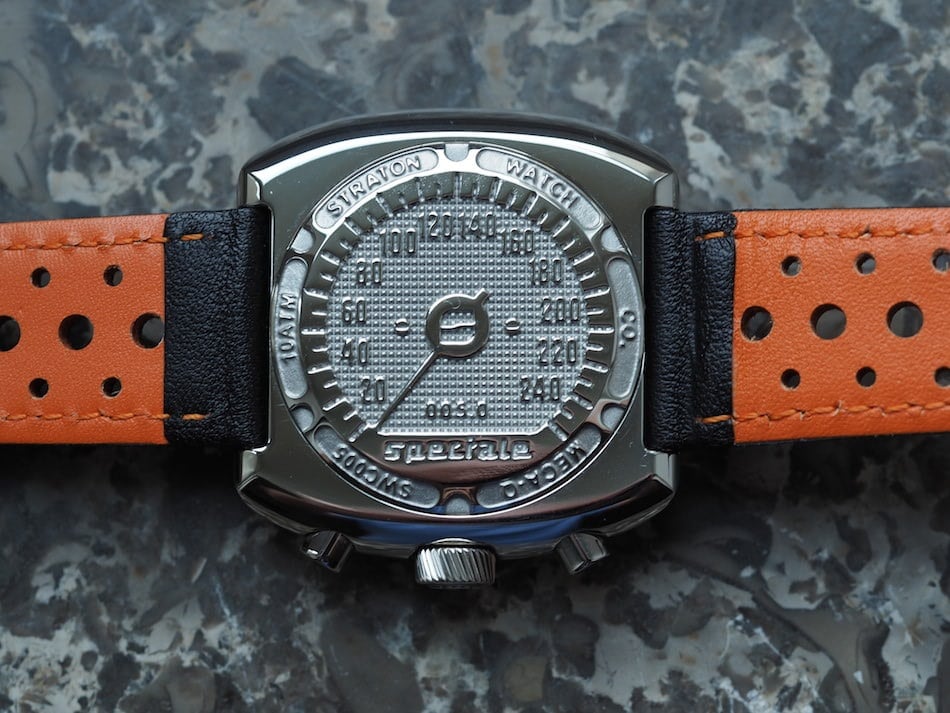 There are some other details found on the Straton Speciale that are worthy of mention. Notably, the screw down case back is a highly designed embossed piece that depicts a large speedometer. The logo is integrated into the design as well as unique information depending on the movement type that is chosen. 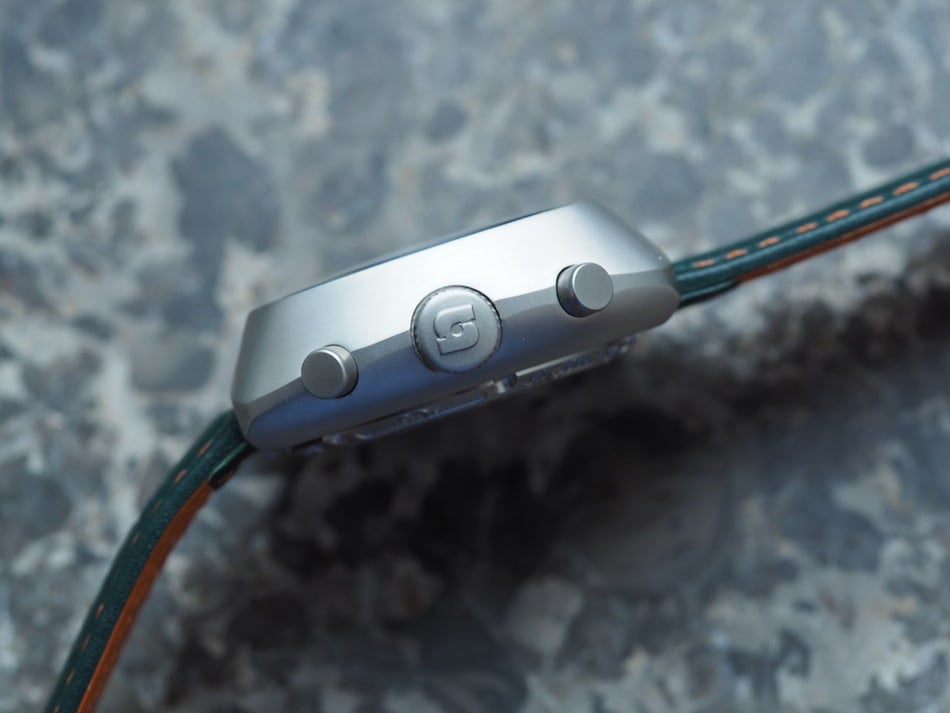 The signed screw down crown (the Speciale is water resistant to 10ATM) also features some automotive-inspired grooves, which are well executed. Finally, the lume is SuperLuminova. 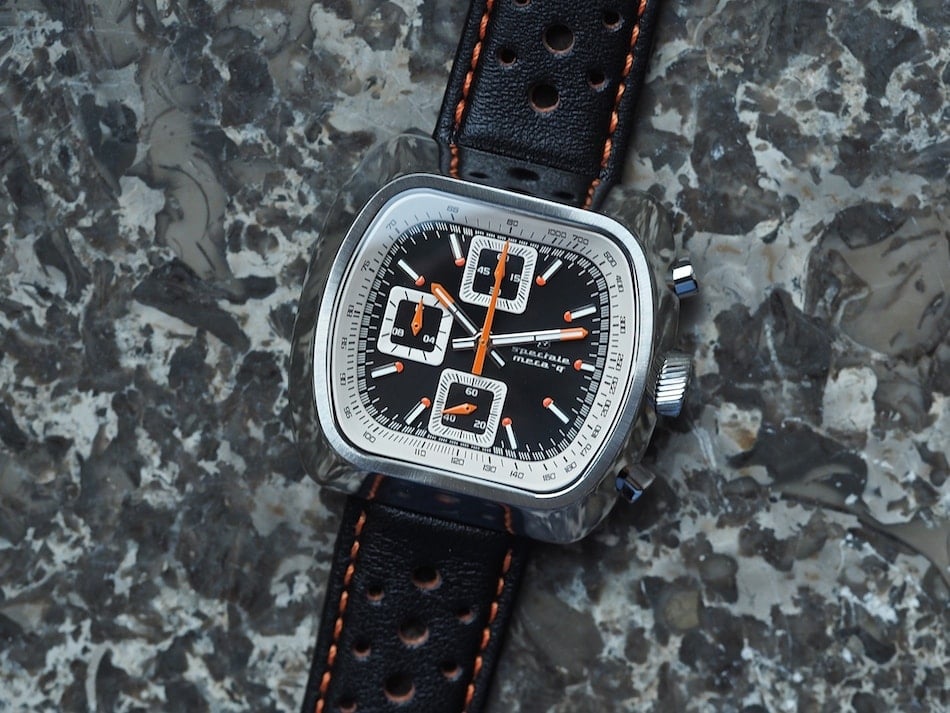 Many Color Choices for the Straton Speciale

The Straton Speciale is available with a blue, black, green, or brown dial. Alternatively, an “all black” PVD version can be chosen. In quartz, the models retail for $499, but are on an introductory offer (similar pricing as the original Kickstarter campaign that raised a whopping 256K Swiss Francs) through March 31st for a “shut up and take my money” price of $369. The automatic version is quite a bit higher with a retail price of $1199, but a sale price of $859. Even at these prices, a distinctive 7750-powered chrono is an attractive deal.  The watches will start shipping in June of 2018. 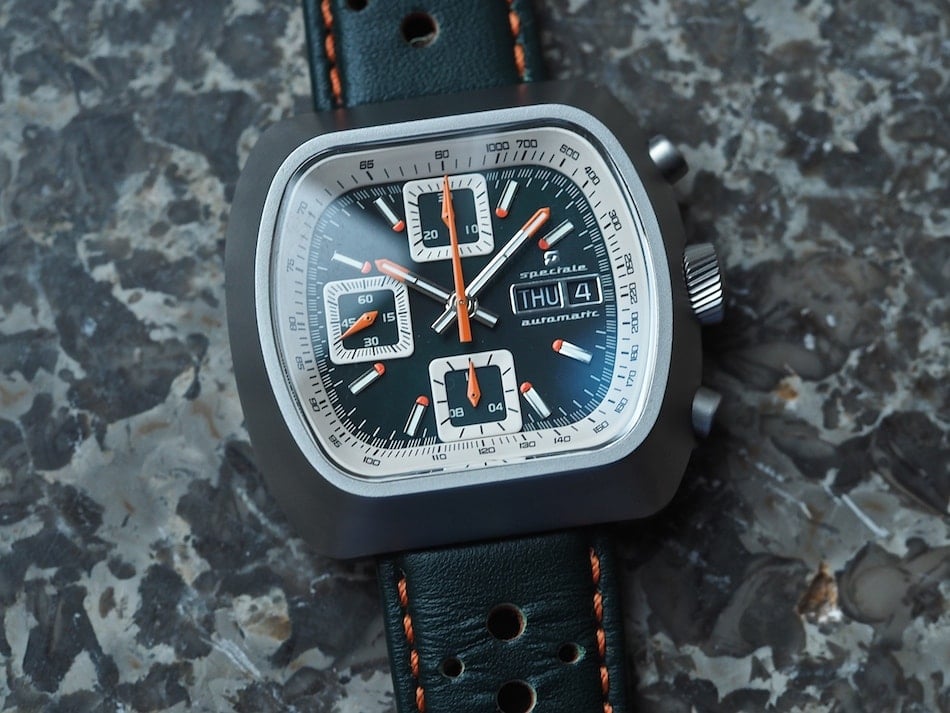 I’ll admit, the idea of the Straton Speciale may not speak in everyone’s design language, but the finished product is awfully cool and delightfully different. It’s absolute proof that micro brands like Straton are unafraid of creating something that a non-mainstream subgroup of watch junkies will happily buy and own. For that, I say well done for not creating a watch that looks like everything else on the market. With that, I’ll grab myself a big nasty IPA from one of California or Pennsylvania’s finer microbreweries. Cheers!

For more information, head to the official Straton site here.

Hot Topics
Are You Still After An Omega × Swatch MoonSwatch?
117 comments
Introducing: The New Seamaster Professional 300M 60 Years Of Bond — With A Special Animated Case Back
110 comments
Introducing: The Oris Divers Sixty-Five Fratello Limited Edition
109 comments
It’s Time To Invest In A Dress Watch — Our Picks From Breguet, Omega, Grand Seiko, And More
75 comments
Rolex Is Going Certified Pre-Owned
71 comments
Popular
Hands-On With the Seiko Prospex SRPC91K1 – Save The Ocean
Robert-Jan Broer
15
Oris Classic Date Or Save Up For an Omega De Ville Prestige?
Robert-Jan Broer
17
Why You Can’t Go Wrong With The Rolex Datejust
Robert-Jan Broer
5