Could Unimatic have done any better in 2020? That was the question I asked myself when I received an e-mail in the second week of December announcing the new Unimatic Modello Quatro U4-A. Two weeks before the year ended, the brand added another model to the rapidly-expanding line-up of Unimatic models. But the Modello Quattro is not just another addition. It’s a completely new model that combines familiar looks with surprising new design details. So yes, 2020 could become even better for the brand as it turns out.

In 2020 we saw a string of interesting releases from Unimatic. The Milan-based brand started by Giovanni Moro and Simone Nunziato has showered us with a great variety of watches this year. The main releases were the minimalist versions of the popular Modello Uno. And we also saw the release of the monochrome grey and black versions of the Modello Due. On top of that, there were numerous collaborations. The most notable for watch enthusiasts are probably the two watches released with Massena LAB. Just before the end of the year, we also saw a Modello Uno collab with a famous streetwear boutique UNDEFEATED. 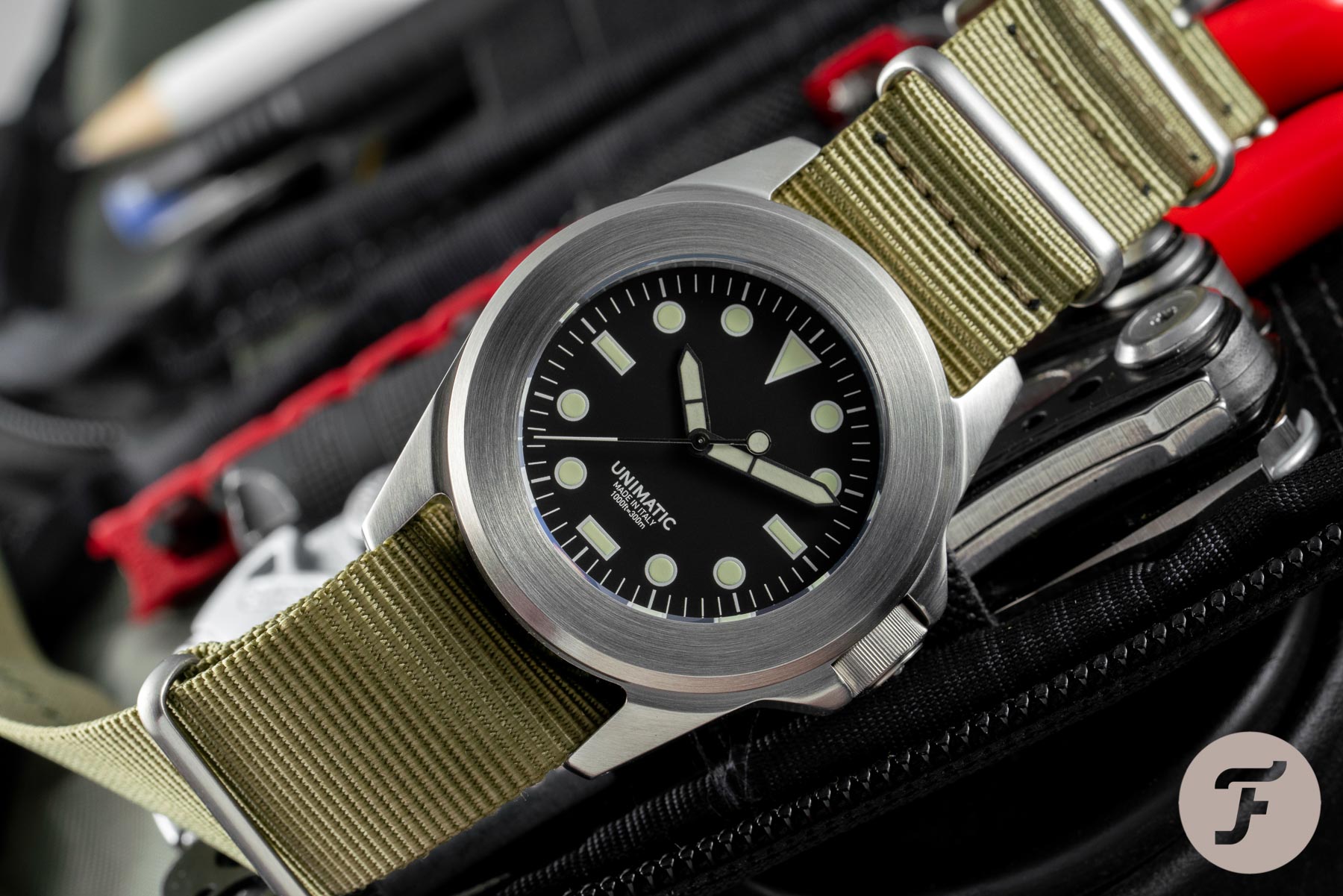 The variety of minimalism

And that variety is a big part of the success of the brand. The minimalist design approach turned out to be a big hit with a wide audience. As I discussed with Giovanni Moro in an interview I did last year: they are incredibly proud that their brand draws a mixed crowd of watch enthusiasts and the more fashion-minded crowd. This variety of people liking Unimatic’s watches has become a key factor in the brand’s success.

The first of many Modello Quattros to come.

Another typical Unimatic aspect is the one time only limited production run of their models. The “Get ’em while they’re hot or they will be gone forever” approach resulted in a great run on different models. And as we slowly get into the Modello Quattro, I can say that the production run of 500 pieces for the first Modello Quattro U4-A sold out in a matter of minutes. But this U4-A is probably the first of many Modello Quattros to come. And it is the perfect first example of another hit for the brand. 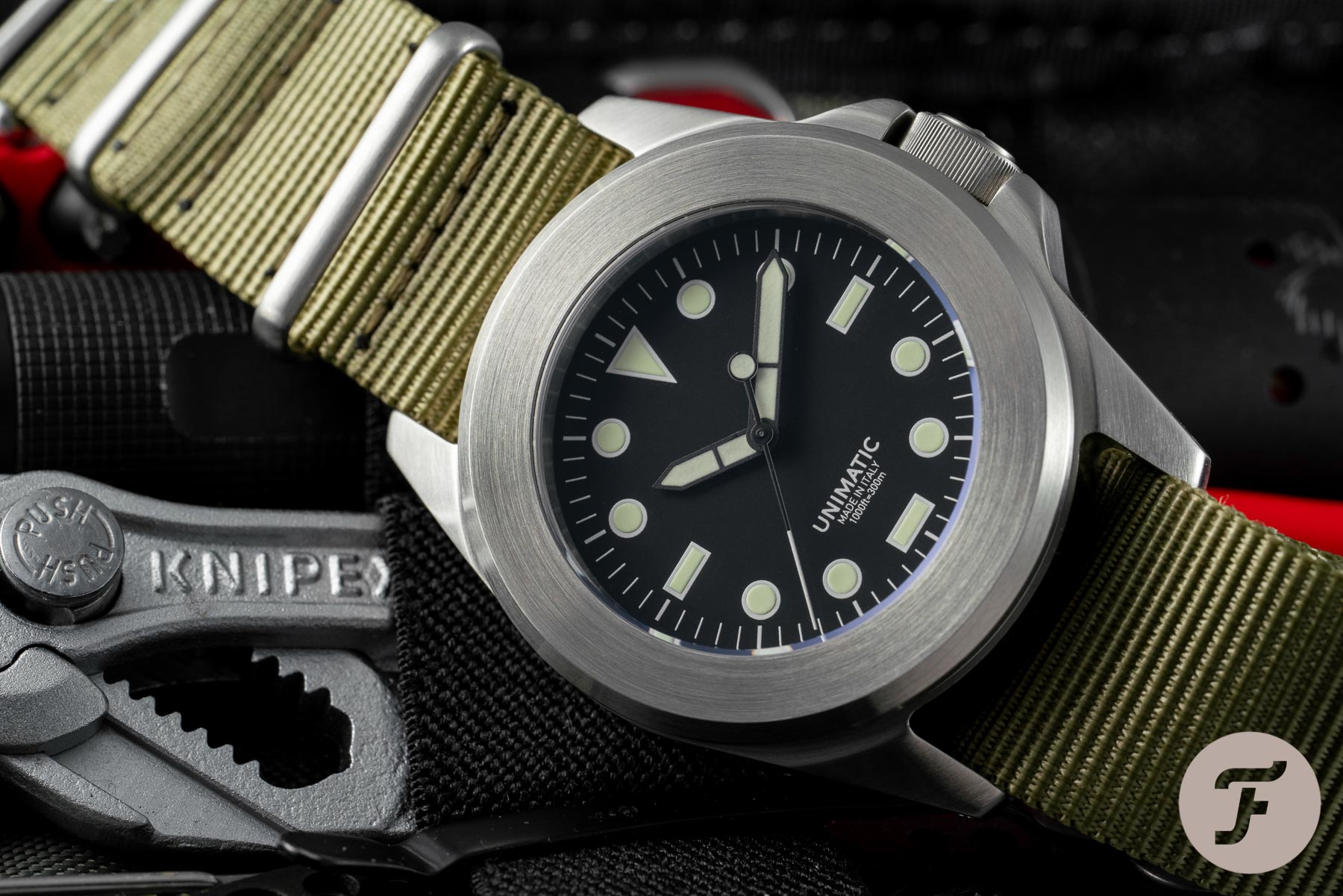 When I first saw the press pictures and read the press release, the watch intrigued me. The thought of creating a military-style watch based on the Modello Uno case was clever. The case of the Modello Uno is great. At 40mm, it is the perfect size. And it is defined by its modern silhouette of round and straight lines. But it also made me question how it would work with a fixed bezel? The secret to the success of Unimatic for me is in its minimalist approach. Especially the constant design variations of the dial and bezel of the Modello Uno delivered some great results. 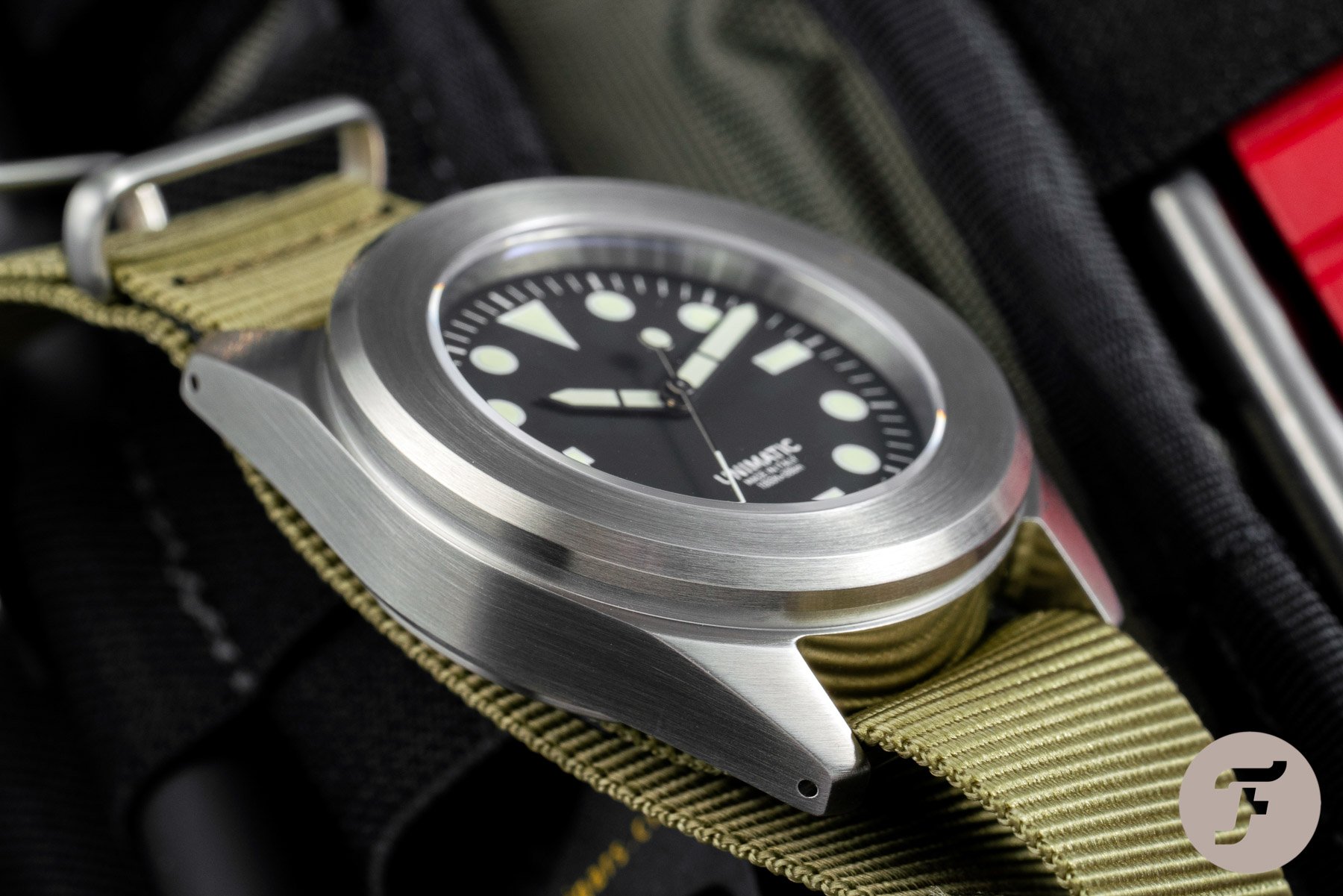 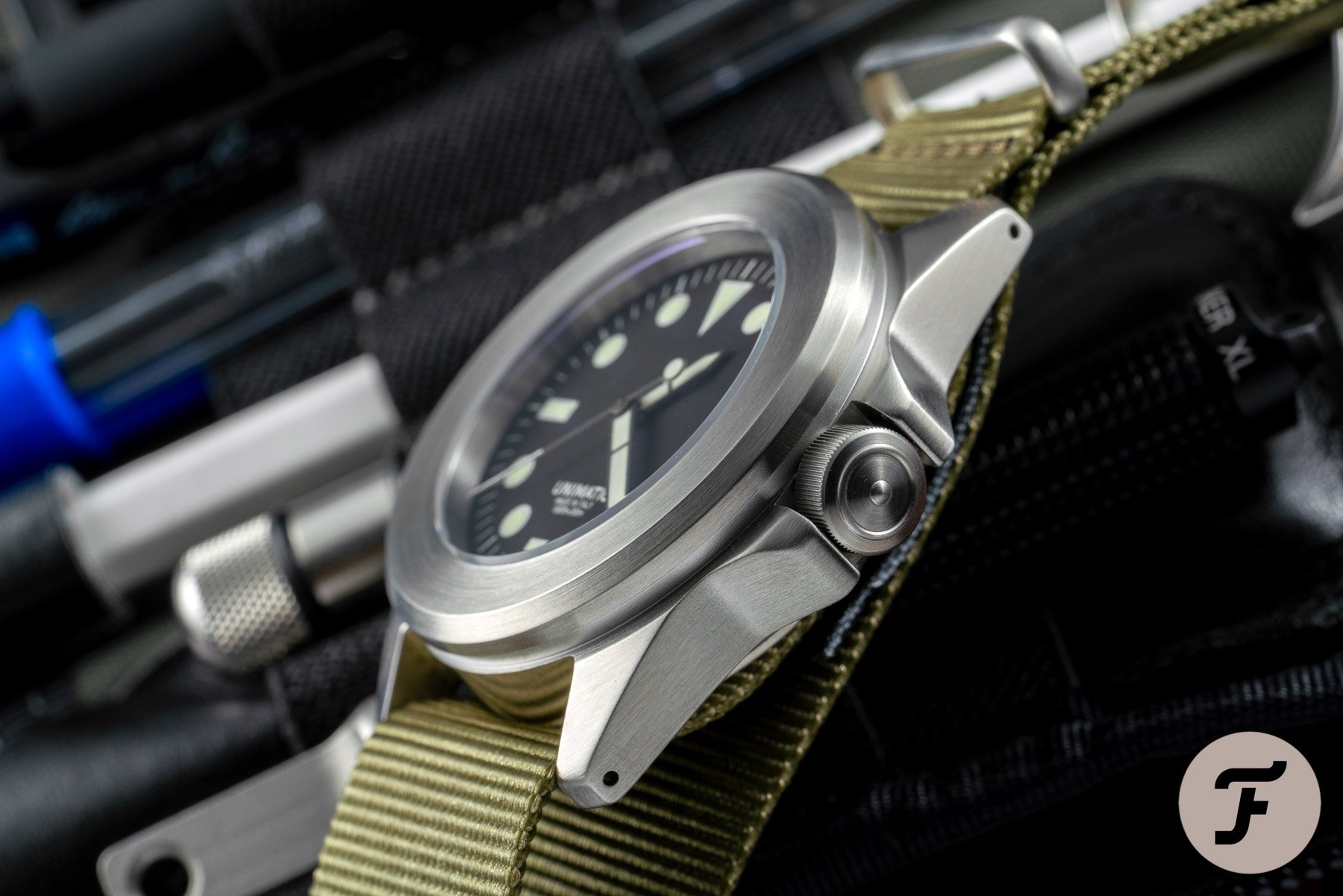 The design of the Modello Quattro U4-A

A couple of days after the announcement when the Modello Quattro U4-A had been delivered for review, I was in doubt. My first immediate reaction is that it looked like a Modello Uno without a bezel. Obviously, that’s oversimplifying it, but first impressions often are fundamental. The watch features many of the familiar design tropes that we have come to know from Unimatic. I quickly found that Moro and Nunziato did an excellent job designing the fixed bezel and keeping the overall proportions and the watch’s military character in mind. 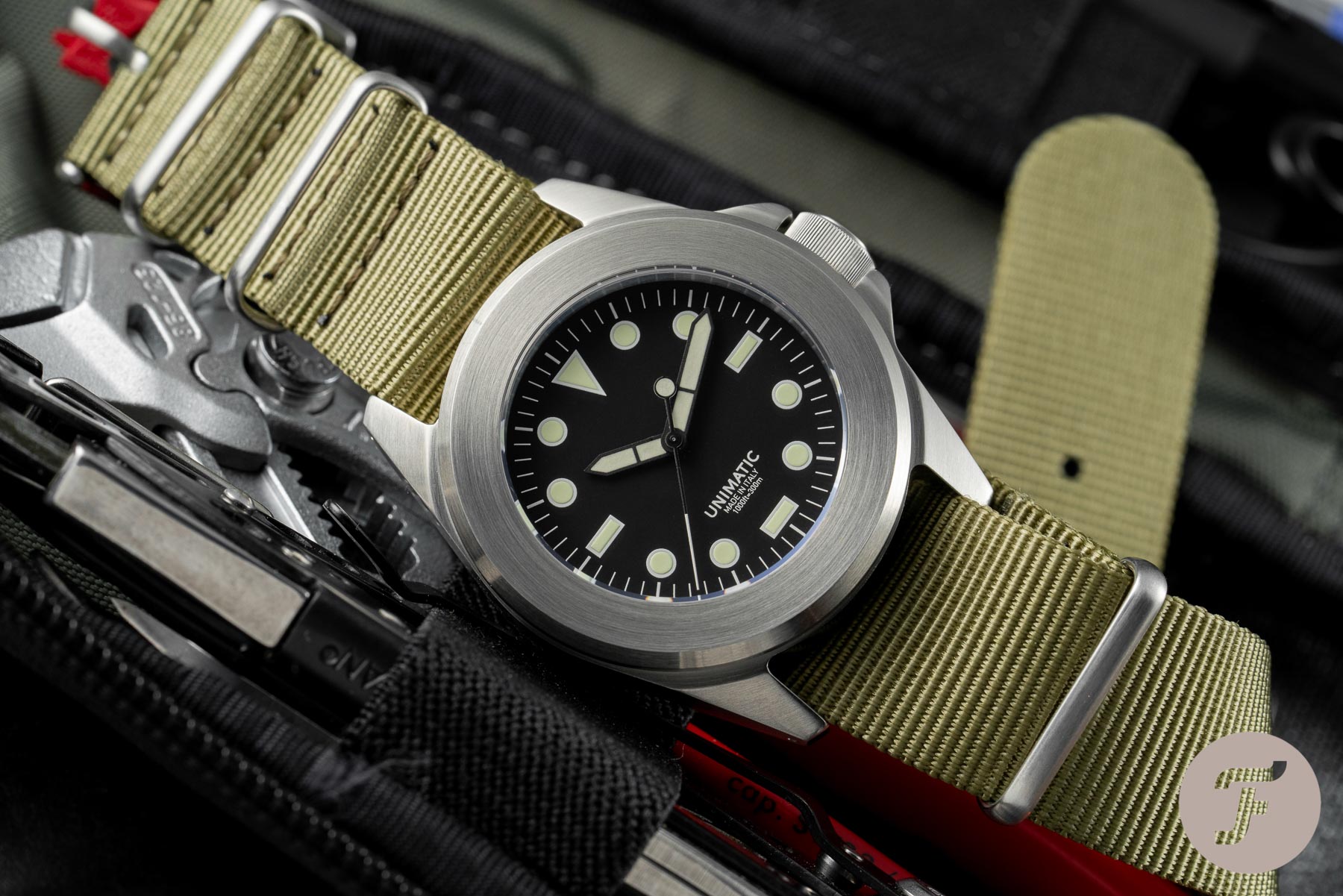 The round-shaped 40mm case obviously feels familiar. A small detail is that the U4-A has drilled lugs for quicker changing of the strap/bracelet. The entire case has a brushed finish, and the fixed bezel features a circular brushed finish. It fits the watch’s military character, and the circular pattern is the perfect frame for the minimalist dial design. 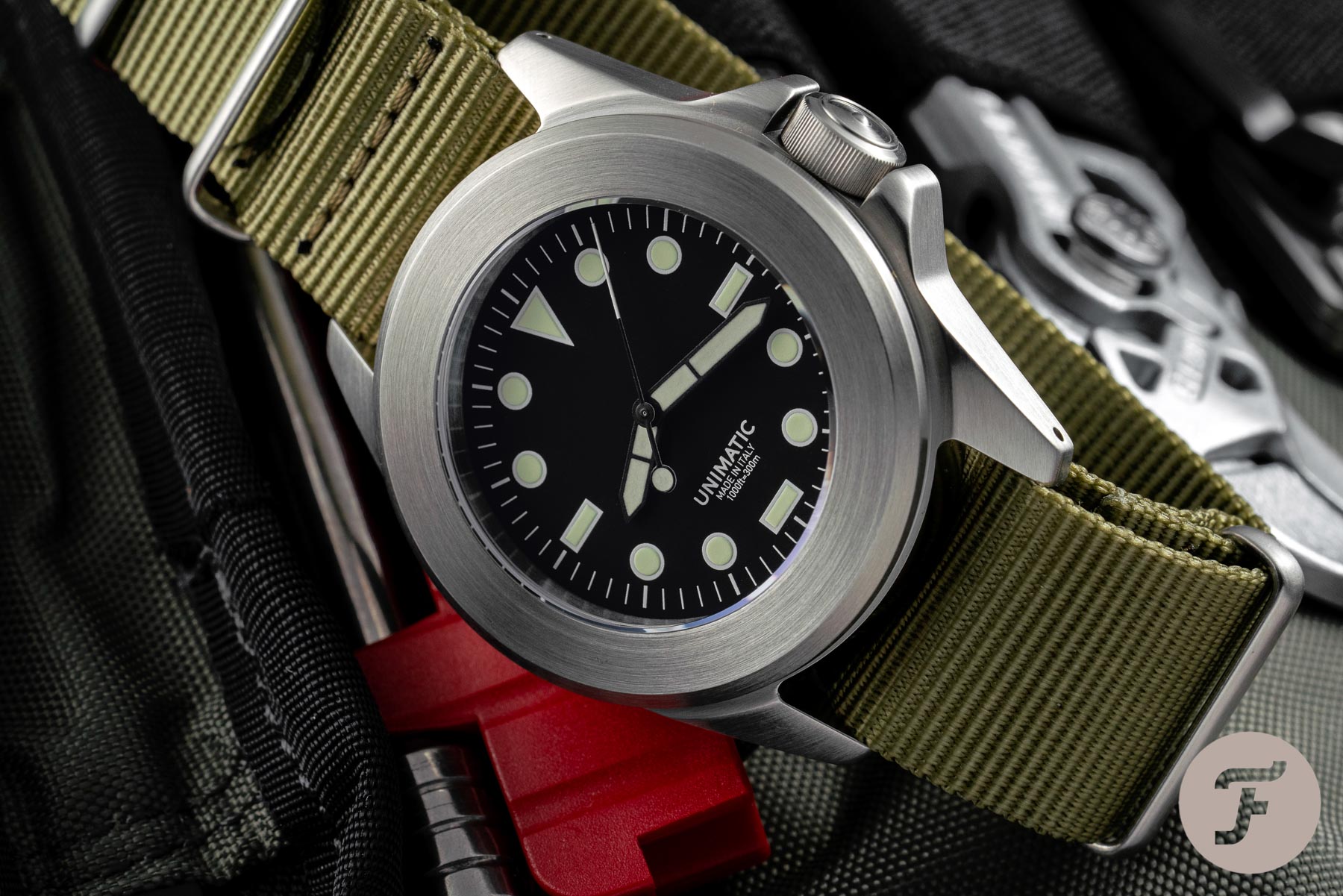 Because of the thicker and slightly smaller bezel and the differently executed sapphire, it also seems as if the dial is smaller on the Modello Quattro. But they are the same size, giving the minimalist design of the dial of the U4-A the same space as the Modello Uno. The faded black dial features a familiar minimalist Unimatic layout with a combination of dots, rectangles, and a triangle as hour markers. 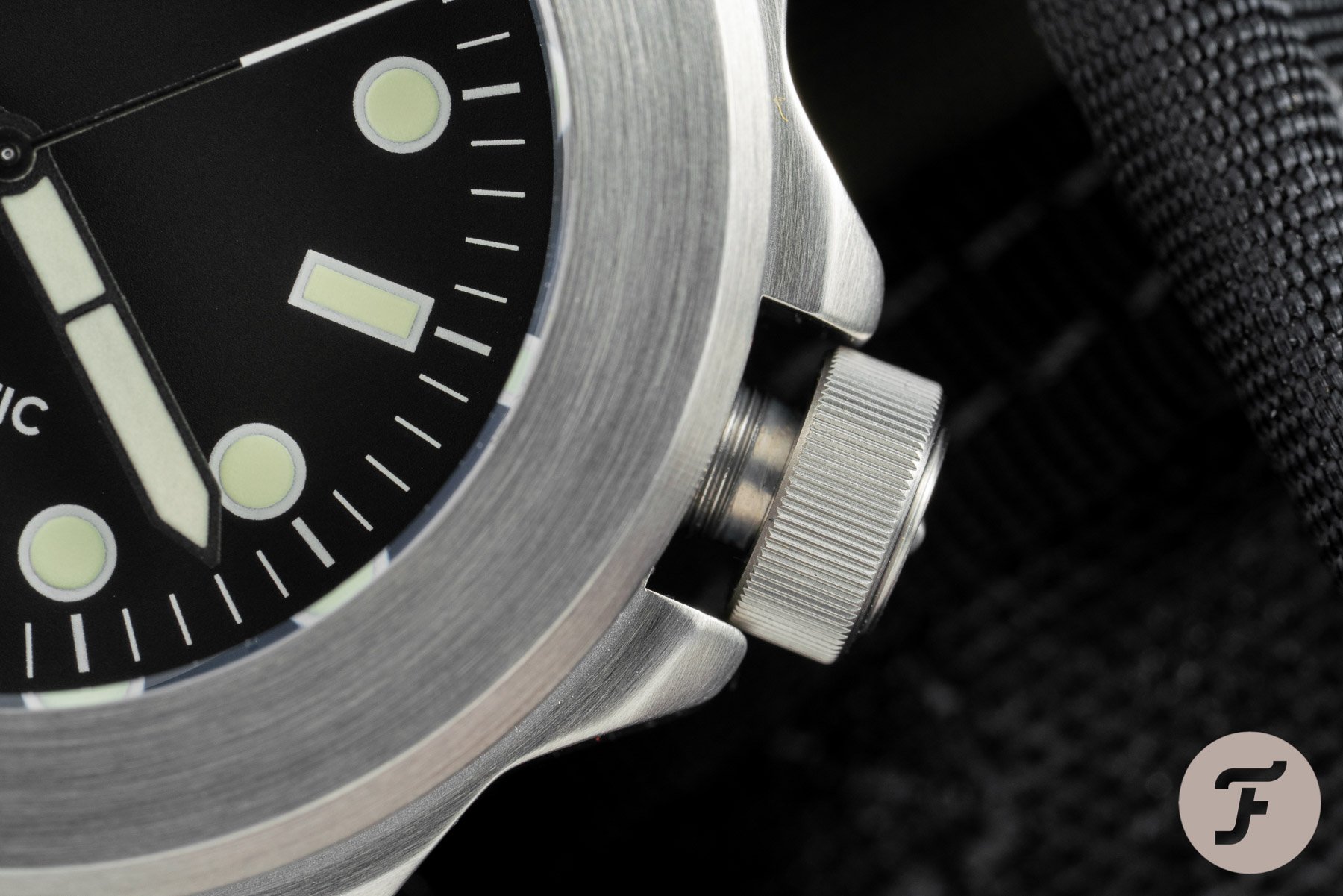 An off-white 60-minute scale on the dial periphery surrounds the hour markers. The hour and minutes hand are the familiar phantom ladder design as we know from other Unimatic models. Next to that, the thin seconds hand features a lollipop-style counterweight. The hour markers and the handset are filled with C3 Super-LumiNova that lights up in pale green in darker light conditions. Combined with the olive green NATO strap, it creates a great overall minimalist military green design. 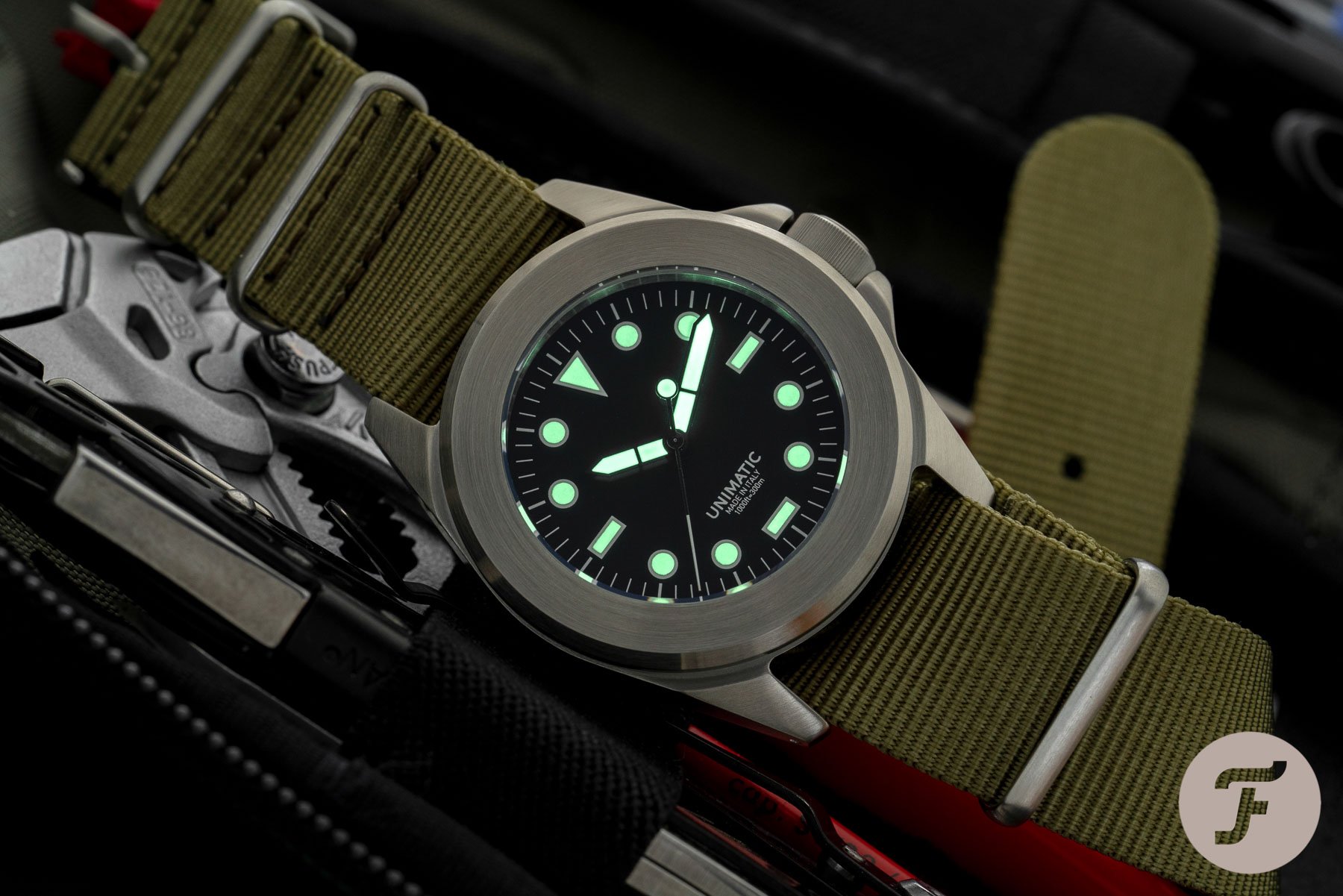 The automatic Seiko NH35A caliber powers the U4-A. The movement operates at 21,600 vibrations per hour and has a power reserve of 41 hours. It features hacking seconds and bidirectional automatic winding. The movement is the go-to movement for all the mechanical Unimatic models and has proven robust and reliable. 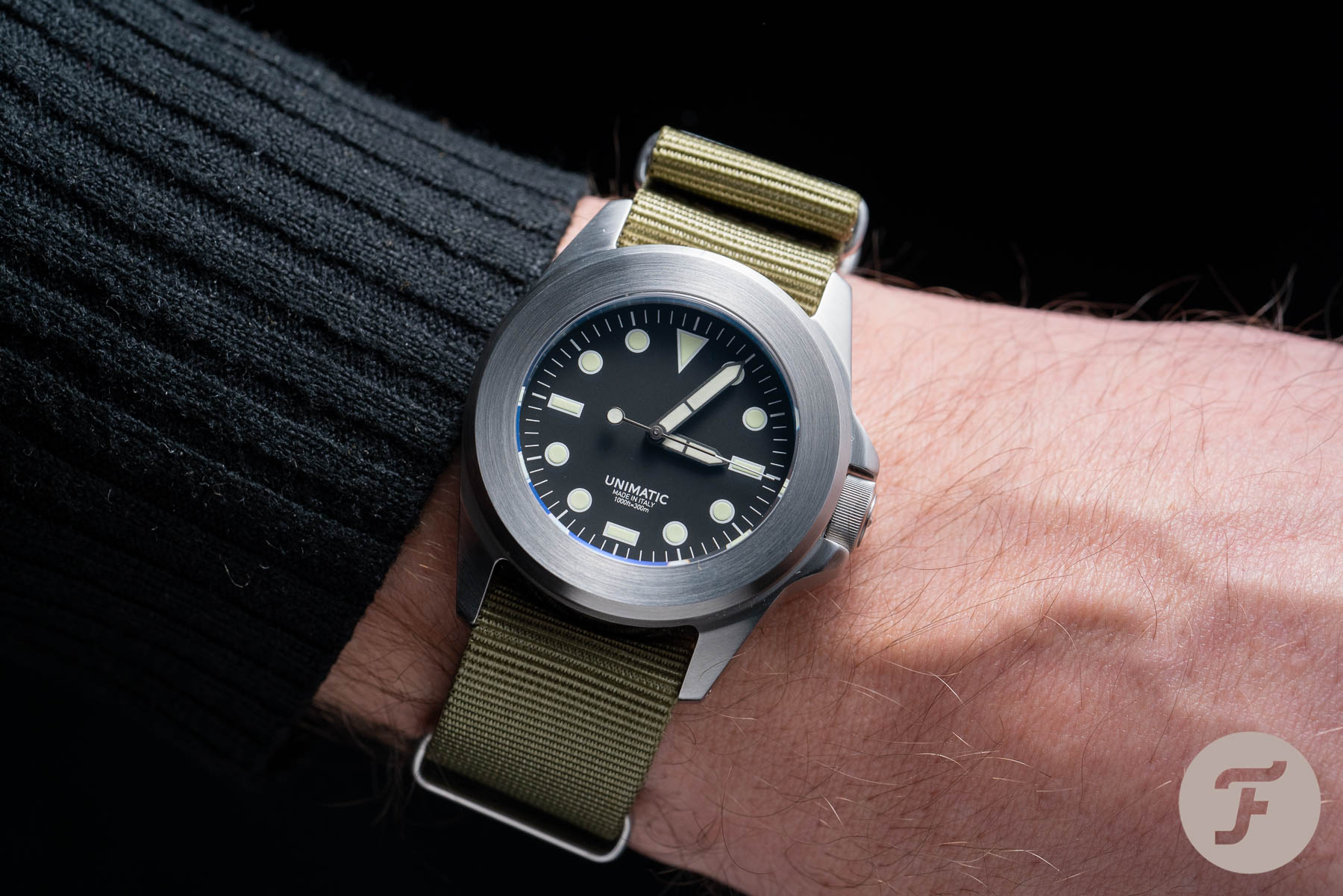 After first impressions subsided, the Modello Quattro quickly won me over. I soon found out that Moro and Nunziato had hit the nail on the head with the U4-A. And as ever so often, the devil is in the details when it comes to design. Overall the design feels familiar, but the watch has many design details that make it feel fresh and new.

Yes, it’s a bit chunkier than the Modello Uno.

The slightly thicker case fits the watch’s sturdy military character but is still a joy to wear. Yes, it’s a bit chunkier than the Modello Uno, but I never experienced it as too chunky. The thicker flat sapphire gives a slightly different view of the black dial with all its familiar elements. And the steel fixed bezel is a great change from the minimalist diving bezels of the Modello Uno. 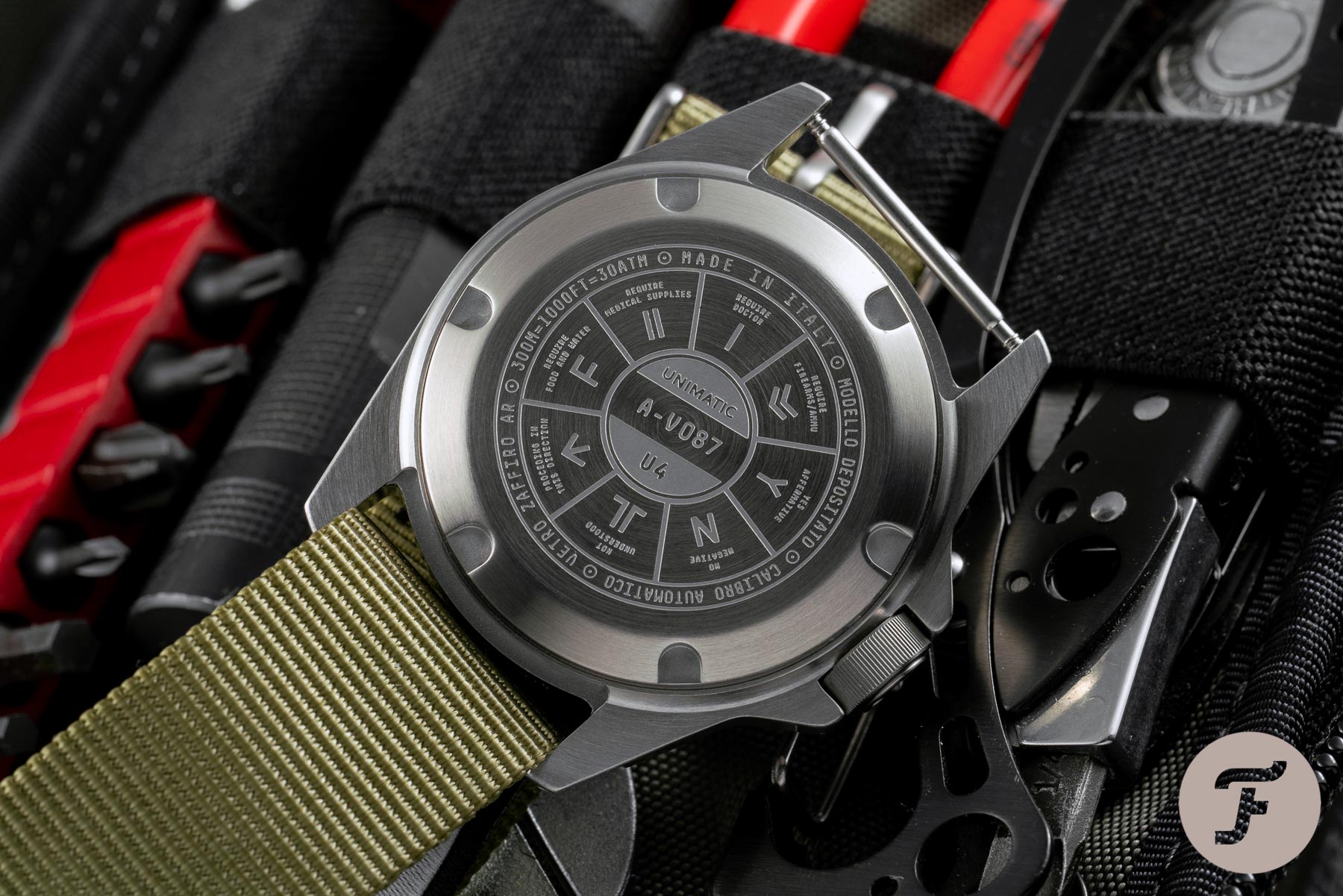 A big improvement is the crown action compared to the Modello Uno. It’s easier to use, and overall it feels a lot better quality. It’s a welcome upgrade of one of the few elements that could use a step up in refinement. 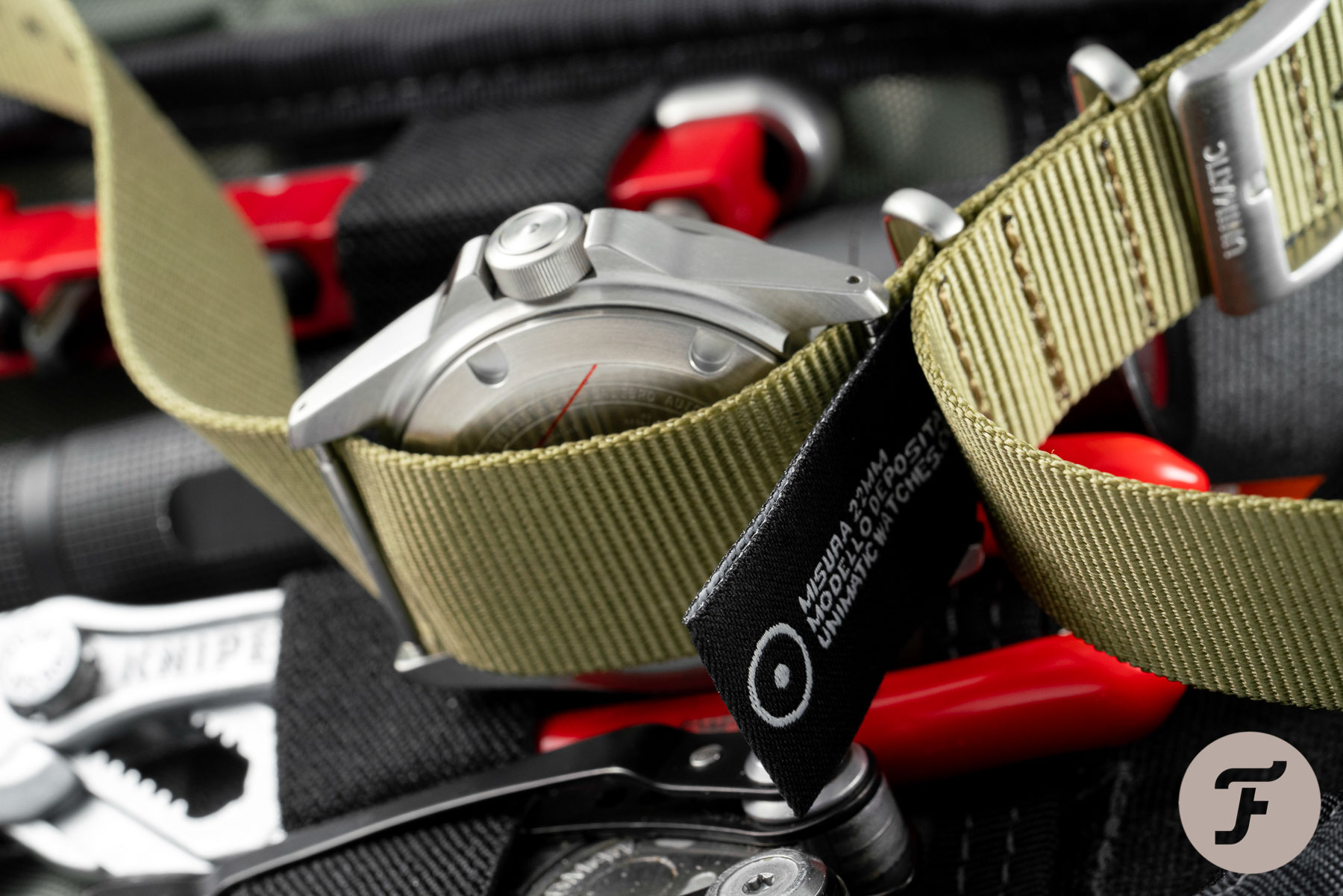 The olive drab NATO strap the watch comes on is also impressively made. It is slightly thicker than the Modello Uno’s NATO straps, making it perfect for the slightly thicker case. When you remove the NATO strap, a nice detail is the Ground-to-Air Signals engraving on the case back. It further emphasizes the military character of the watch. 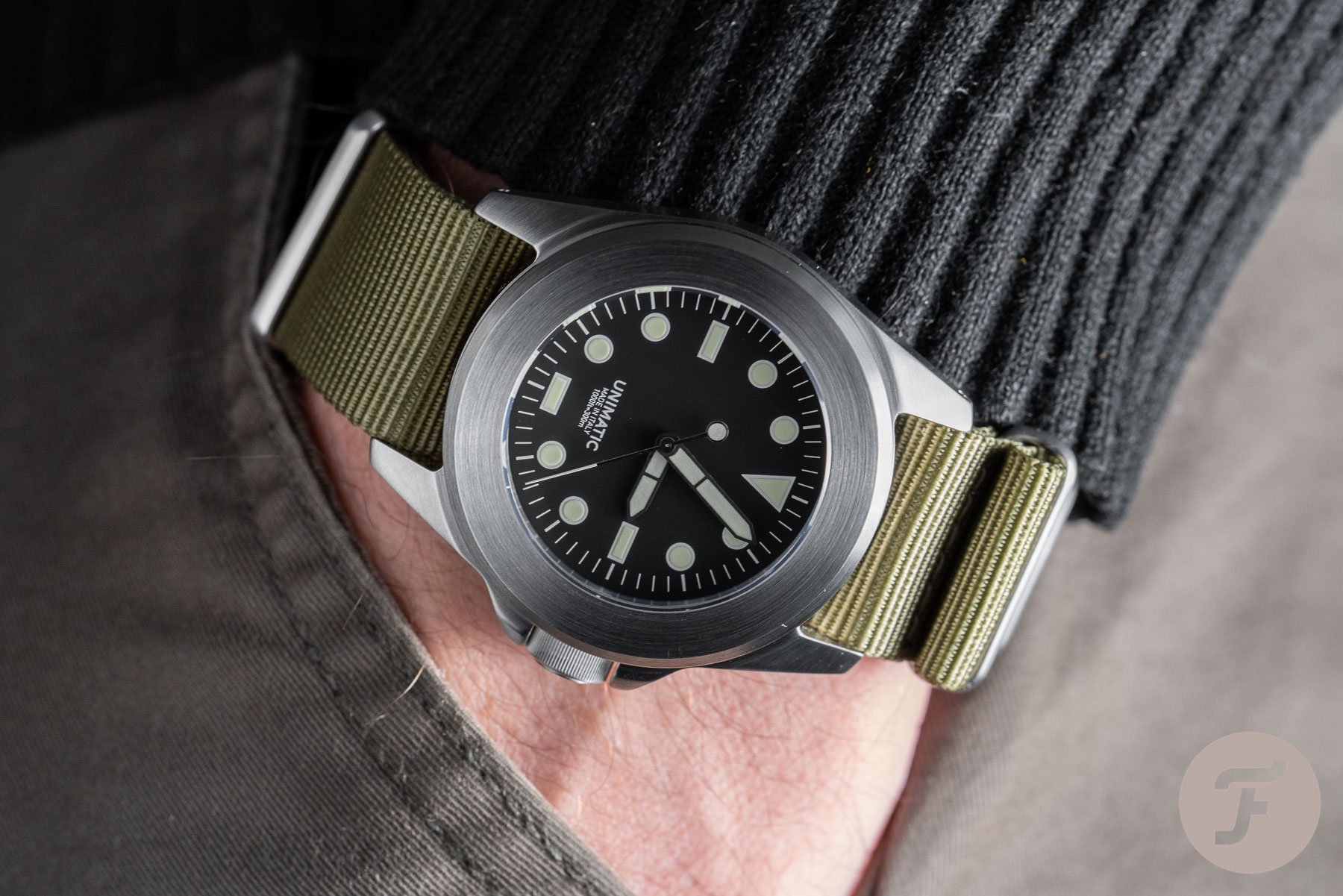 There is no way around it. Unimatic has created another winner with the Modello Quattro U4-A. After wearing the watch for two weeks, I am very impressed by what Moro and Nunziato have pulled off. They have found a minimalist design language that is very recognizable as Unimatic. But within that minimalist profile, they can find new ways of expanding the horizon of what is possible.

It has enough character to make it stand out.

The overall minimalist style of the U4-A is in line with the other models we know from the brand. But it has enough character to make it stand out from the Modello Uno it is based on. The fixed bezel, the thicker case, the use of a flat sapphire crystal, the thicker crown, and the quality of the NATO strap all fit the military character of the watch to create its own place in the Unimatic collection. 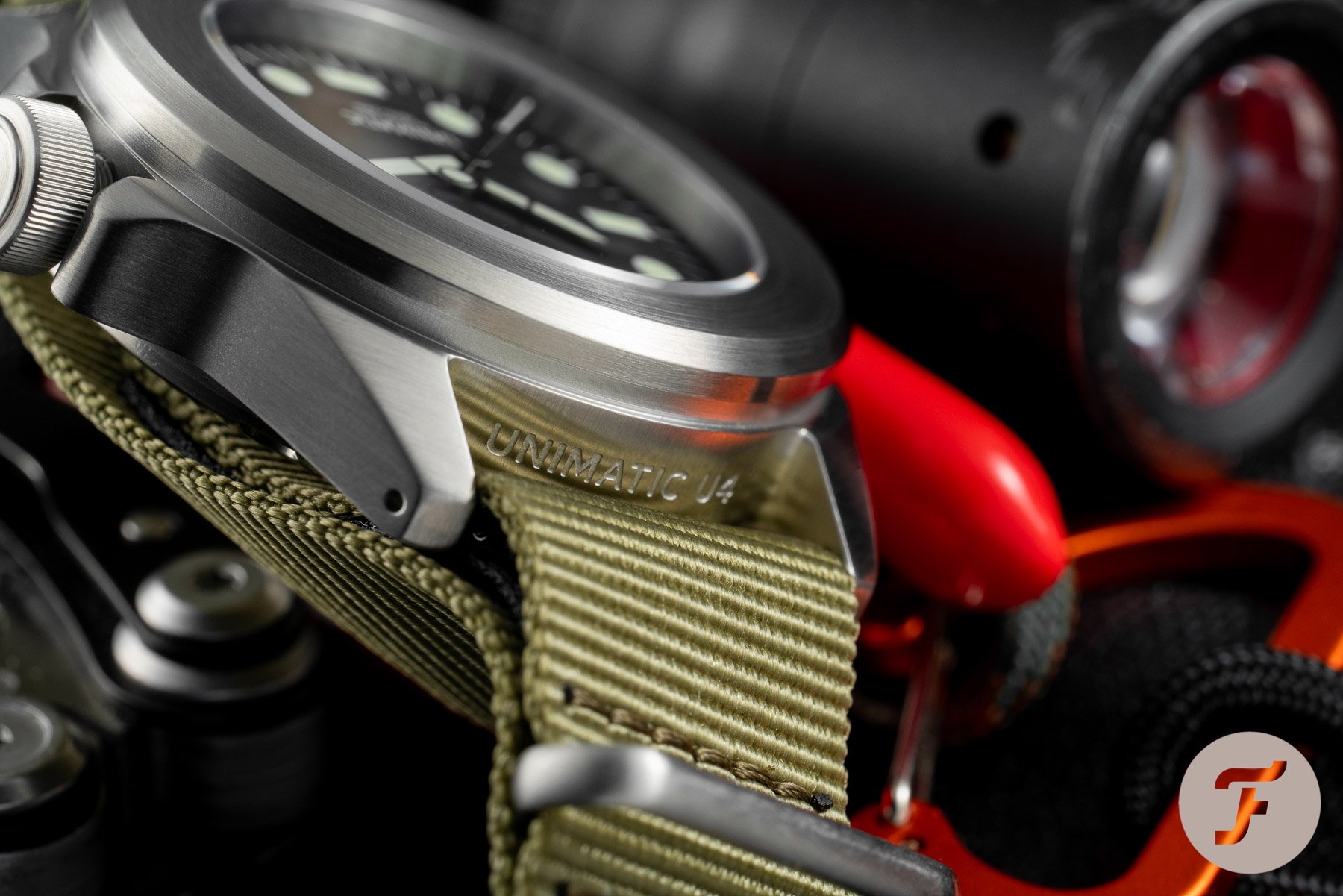 Personally, I love a well-designed minimalist watch. The question remains, however: how far can you stretch a design without it becoming boring? Unimatic has shown that there is a lot more to explore with its watches. And I can’t wait to find out what is next after ending 2020 with the Modello Quattro U4-A. For more info, you can visit the official Unimatic website here.

Hot Topics
Introducing: The Omega Speedmaster Super Racing With Spirate System
162 comments
Design Vs. Specs — Which Is More Important To You When Buying A Watch?
86 comments
The Time To Buy Is Now: How The Current Economic Climate Influences Watch Buying And How You Should React
51 comments
My Predictions For New Omega Speedmasters In 2023
48 comments
A Regret-Free Guide To Buying Your First Luxury Watch — Part Three: Higher-End Options From Omega, Rolex, Grand Seiko, And More
48 comments
Popular
Certina DS PH200M – Hands-On Review
Balazs Ferenczi
23
The Omega Seamaster Diver 300M Returns – On The Wrist Of Daniel Craig
Paul Dezentjé
17
You Asked Us: Rolex Submariner vs Omega Seamaster
Robert-Jan Broer
25