Until recently, the Citizen NJ0150 has only been available in Asia, but now it’s also becoming available in Europe. We received several of them in our office last week, and my eye was immediately drawn to this yellow version, the NJ0150-81Z. One of the first things I did was put a picture of the watch on my Instagram account, and the next thing I knew, my DM box was full. 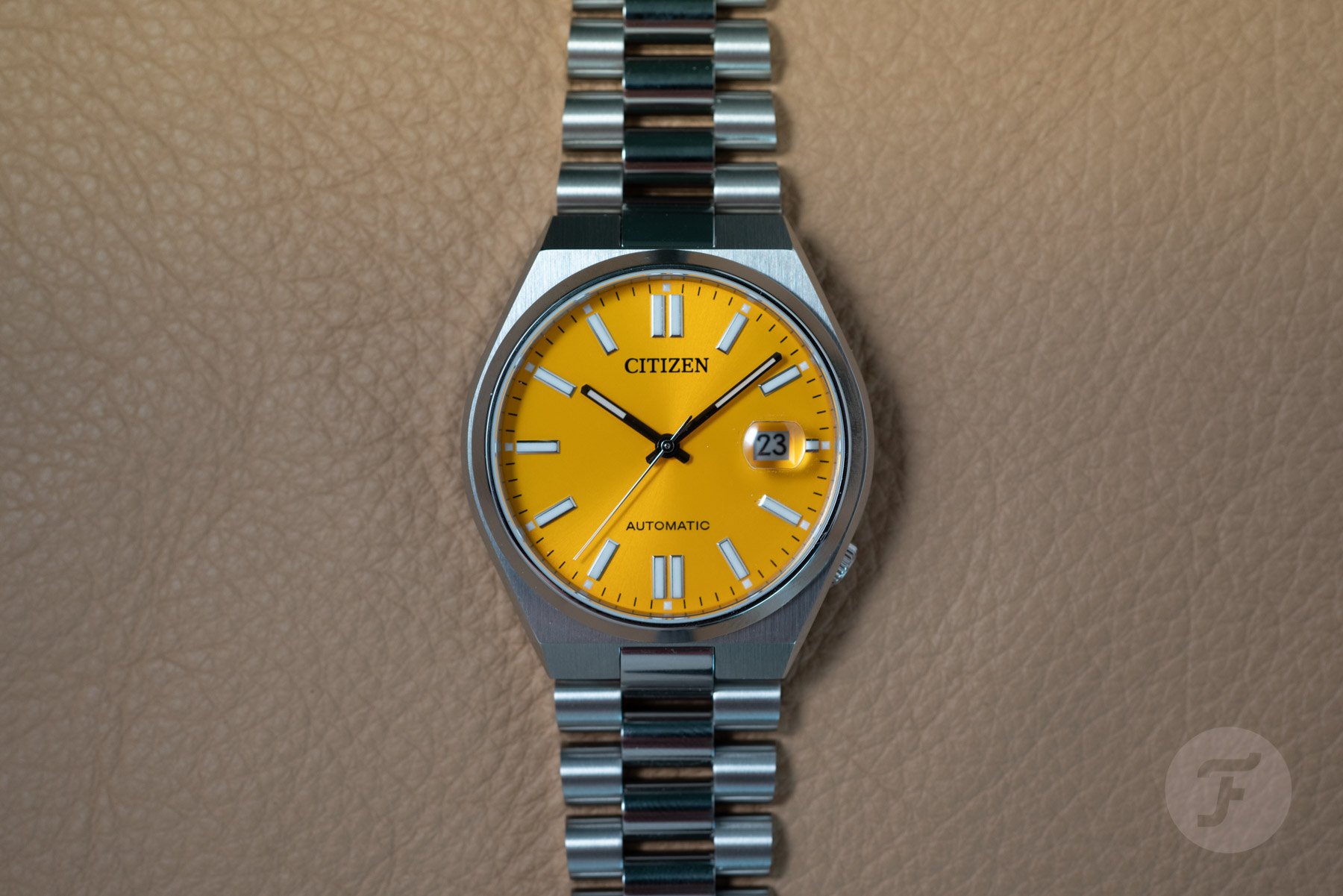 One of the funniest remarks I received (but also one that clearly shows what’s going on here) came from someone telling me that he has been on the waitlist for a yellow-dial Oyster Perpetual since day one. You don’t have to squint to see the resemblance to a Rolex. And other than the yellow dial, with the magnifier on the date window, the case comes across as an Oysterquartz. Someone in the office commented that it also has a bit of a Tissot PRX vibe going on, but I’d say that watch is also inspired by the Oysterquartz from 1977 (however, in those years, more brands were using this case shape). Last but certainly not least, the bracelet on the Citizen NJ0150-81Z is an instant reminder of the Rolex President bracelet that comes on the Day-Date.

Is it a bad thing? Let’s have a closer look at the yellow Citizen NJ0150. 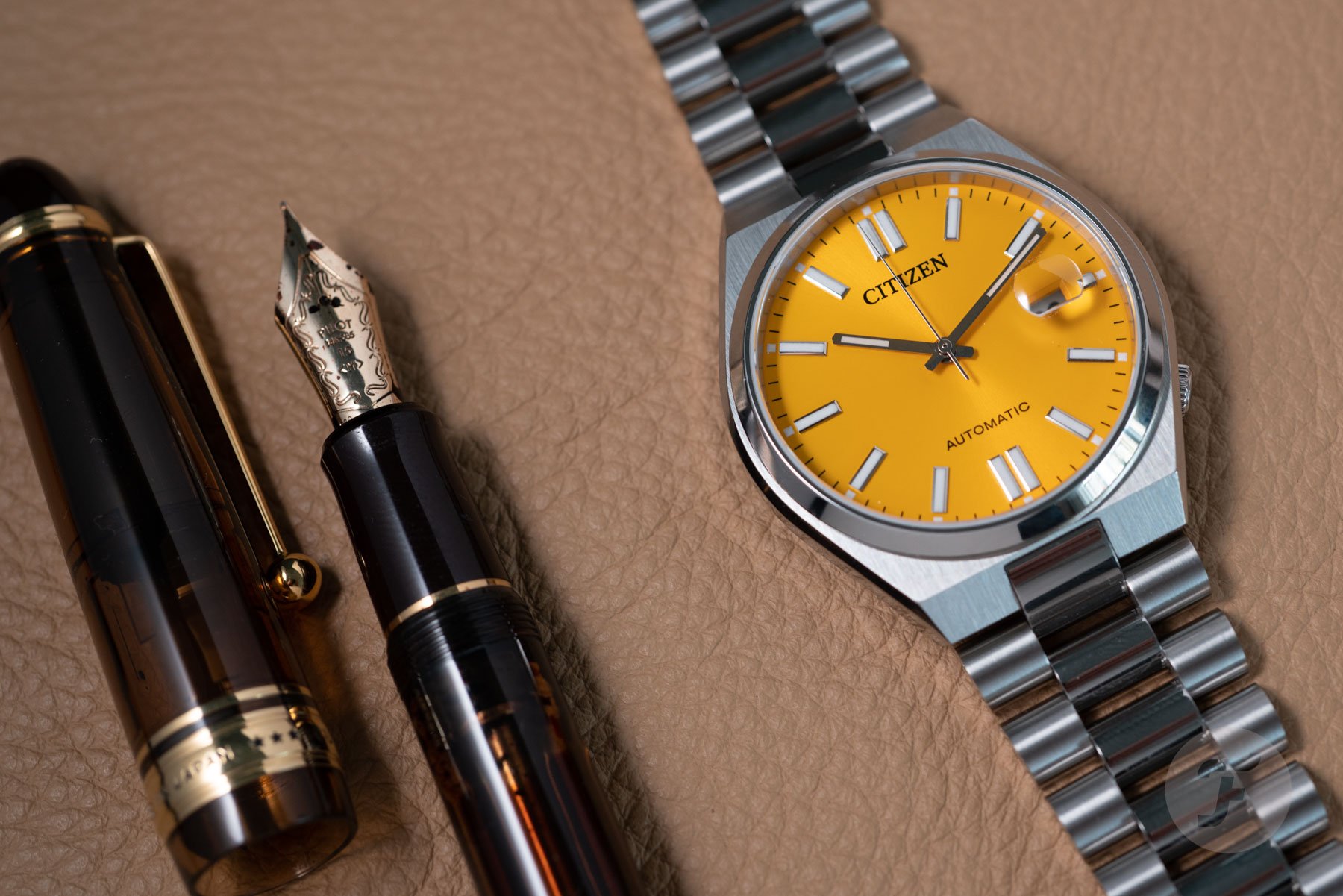 Even though this Citizen piece has an Oysterquartz vibe, there is, of course, a noticeable difference in quality right away. Let’s put it in perspective. The retail price of this Citizen NJ0150 is €279. That’s less than what I paid for one extra link for my Day-Date bracelet. Or, with some imagination, it’s the price of a MoonSwatch plus the money you spent on parking your car when getting it. 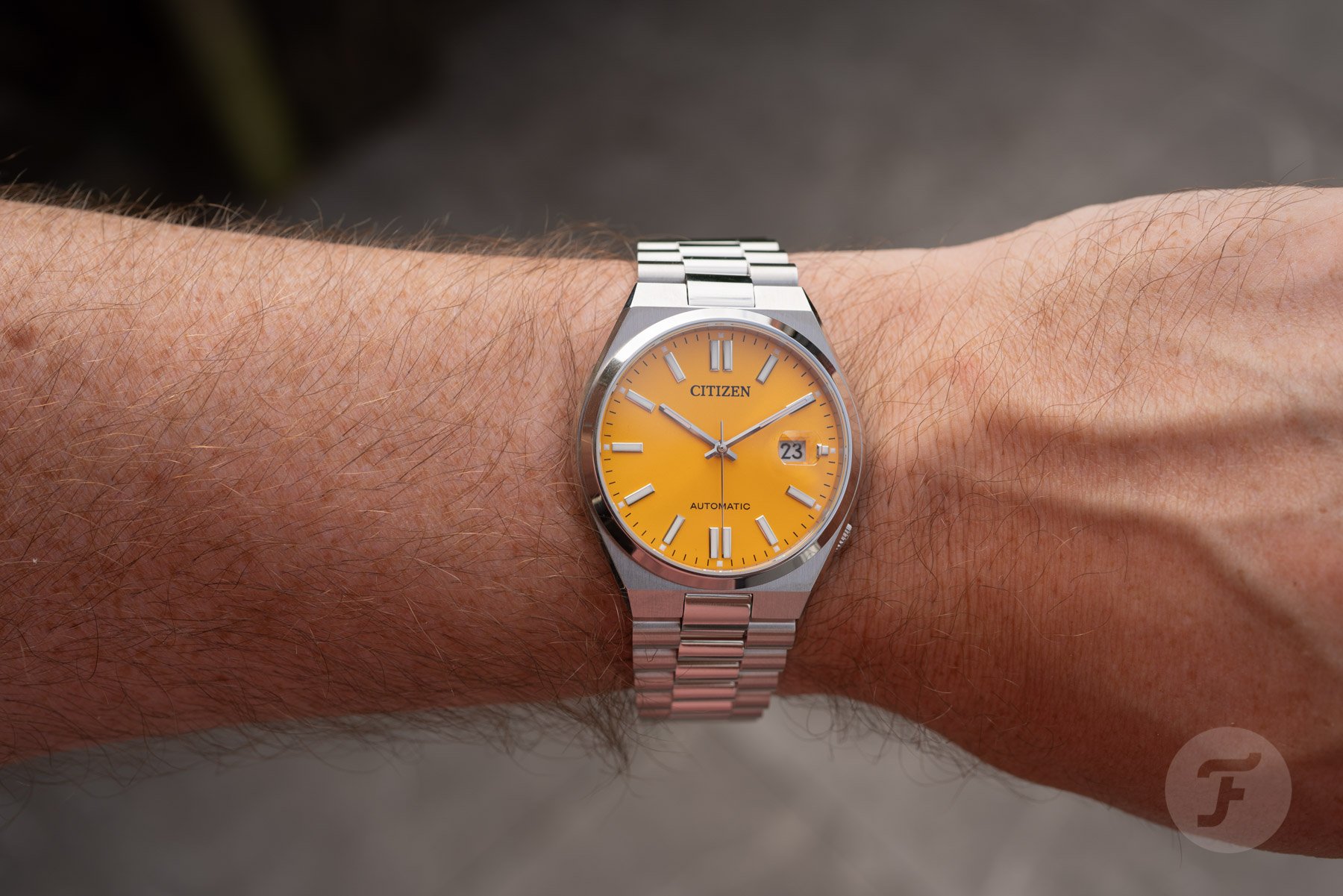 As you can see, the watch fits my 18.5cm wrist nicely. Citizen’s NJ0150 has a diameter of 40mm and a lug-to-lug span of 49mm. The watch comes with quite a few links, and you can drive them out with a pin punch, such as the Bergeon 7230. The watch wears similarly to the PRX Automatic, I must add. Both have a 40mm diameter, whereas the long-discontinued Oysterquartz models were 36mm. The height of the Citizen NJ0150 is 11.7mm, which is quite modest for a modern and affordable watch. 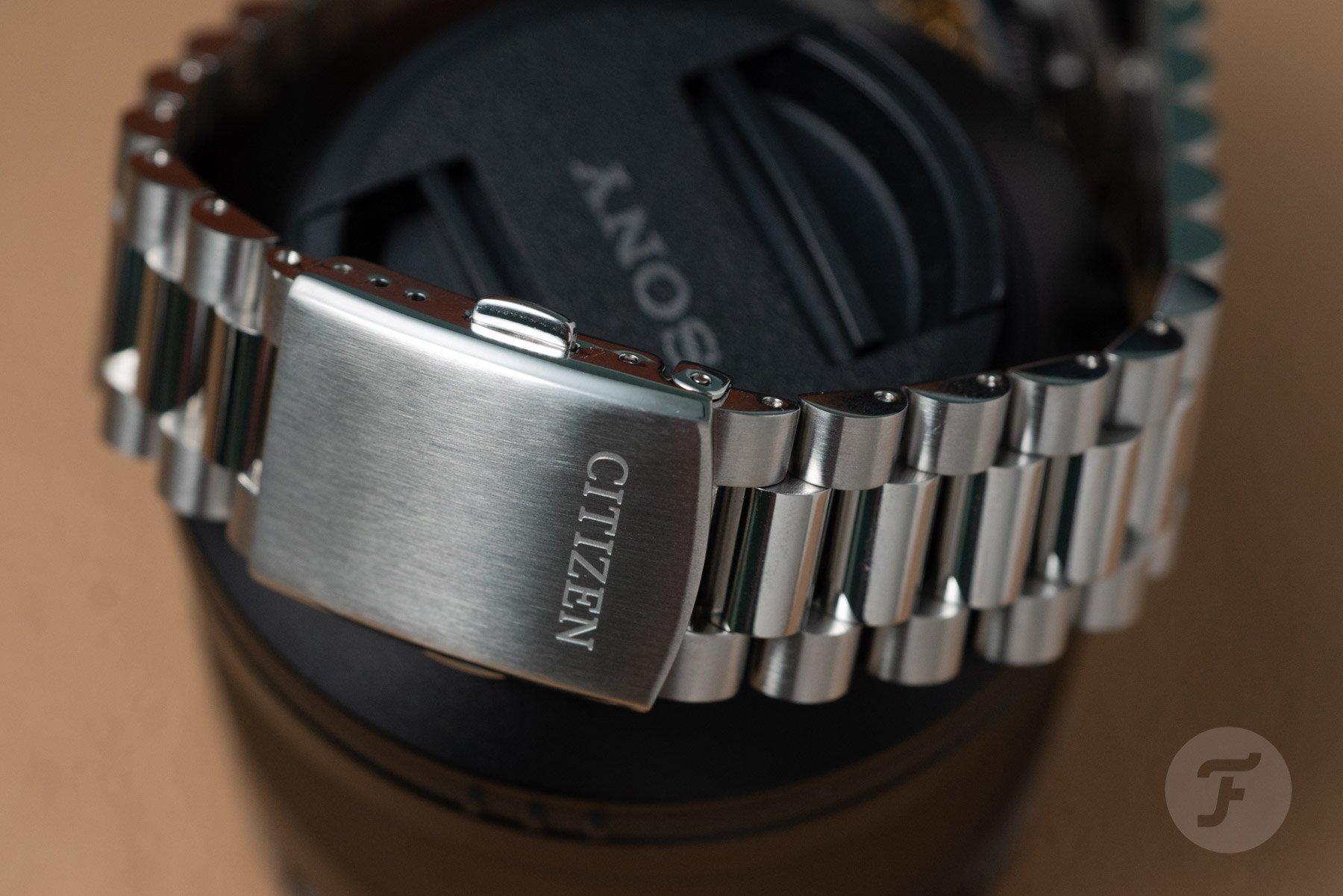 The President-style bracelet is comfortable, and the clasp has two additional holes for micro-adjustment. The bracelet has polished center links and brushed outer links. Here’s where you can see the difference in the quality with more expensive watches; the brushing is shallow but not a dealbreaker. The brushed surfaces on the case are a bit better and not that much different from the finishing on the more expensive Tissot PRX.

As you can see in the images, the recessed crown is located at 4 o’clock. Mind you, you will need to refrain from cutting your fingernails for a while, as it will be incredibly hard to pull the crown out. It is very recessed, you could say. 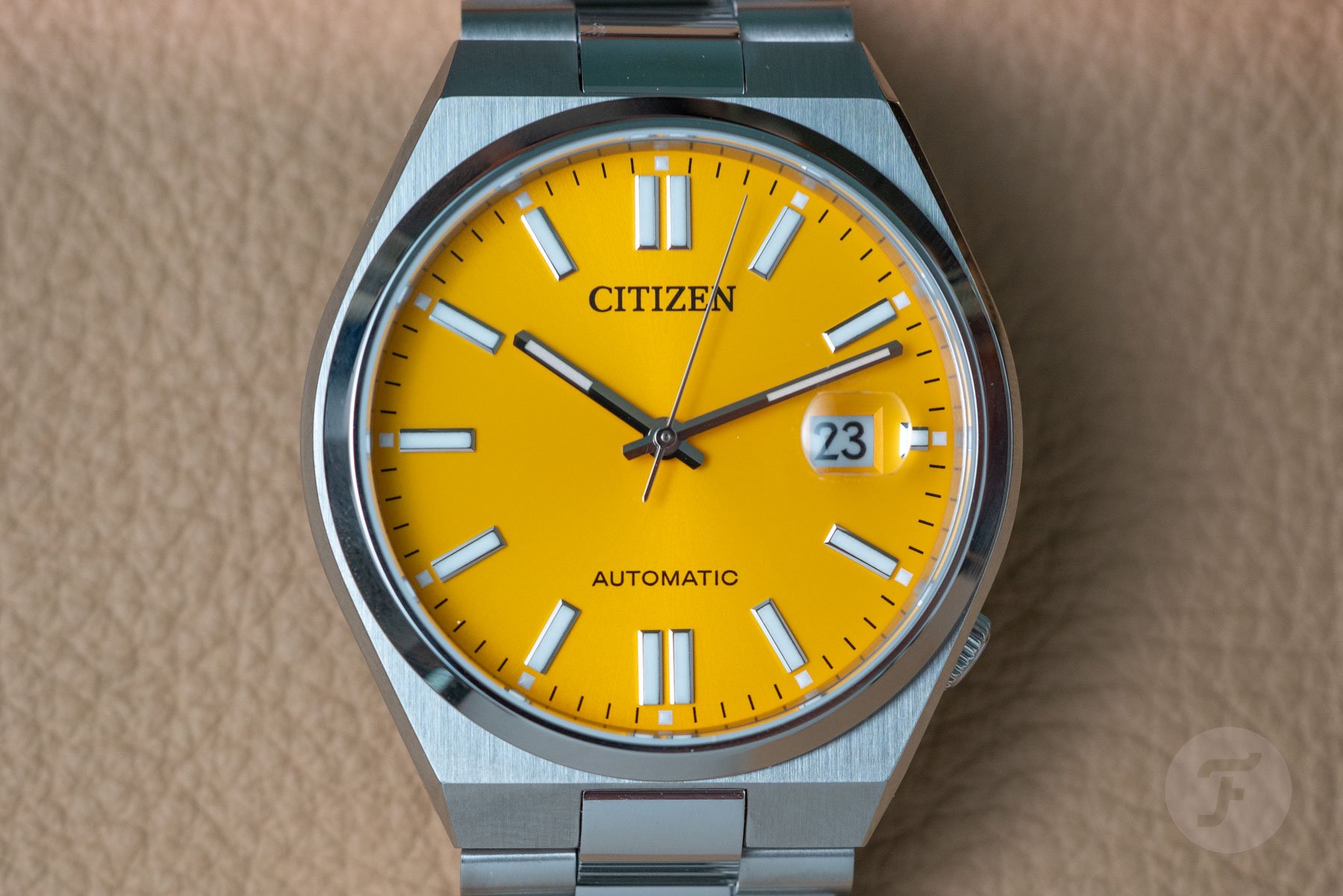 The dial of the Citizen NJ0150-81Z has a sunburst finish and goes from a bit orangey in low-light conditions to bright yellow in the sun. Covered by a sapphire crystal with a “cyclops”, the yellow dial has applied hour markers filled with luminous material. The press release that Citizen sent along states, “…what makes the watch most unique is the magnifying lens over the date window…” First, I feel that that’s not entirely correct. Second, I think it would have even been a nicer watch without the date window (and thus without the magnifier). It’s not a dealbreaker, but it would have made the watch less Rolex-like and a bit cleaner in terms of design. 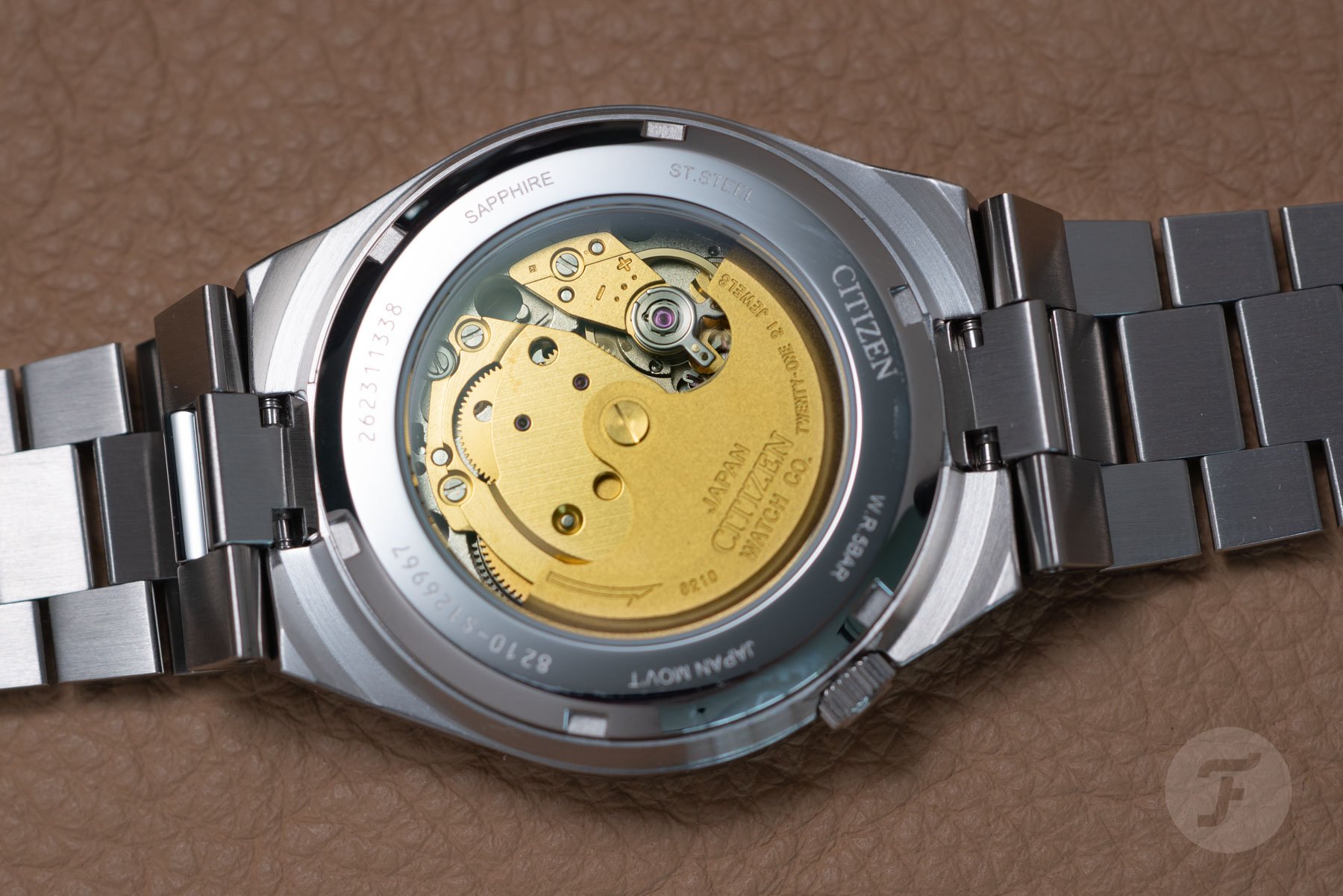 Ticking inside of the NJ0150 watches is Citizen’s automatic caliber 8210. It has a power reserve of approximately 40 hours and beats at 21,600vph. The movement is visible through the transparent case back and retains the original brass color. Citizen indicates that the accuracy is approximately ±20 seconds per day on average. I’ve seen better, and so have you, I’m sure. We put it on our timing device in the office, which confirmed that it performs just under +20 seconds per day on average. However, this is also where the price tag comes into play. For less than €300, that’s not too unreasonable. 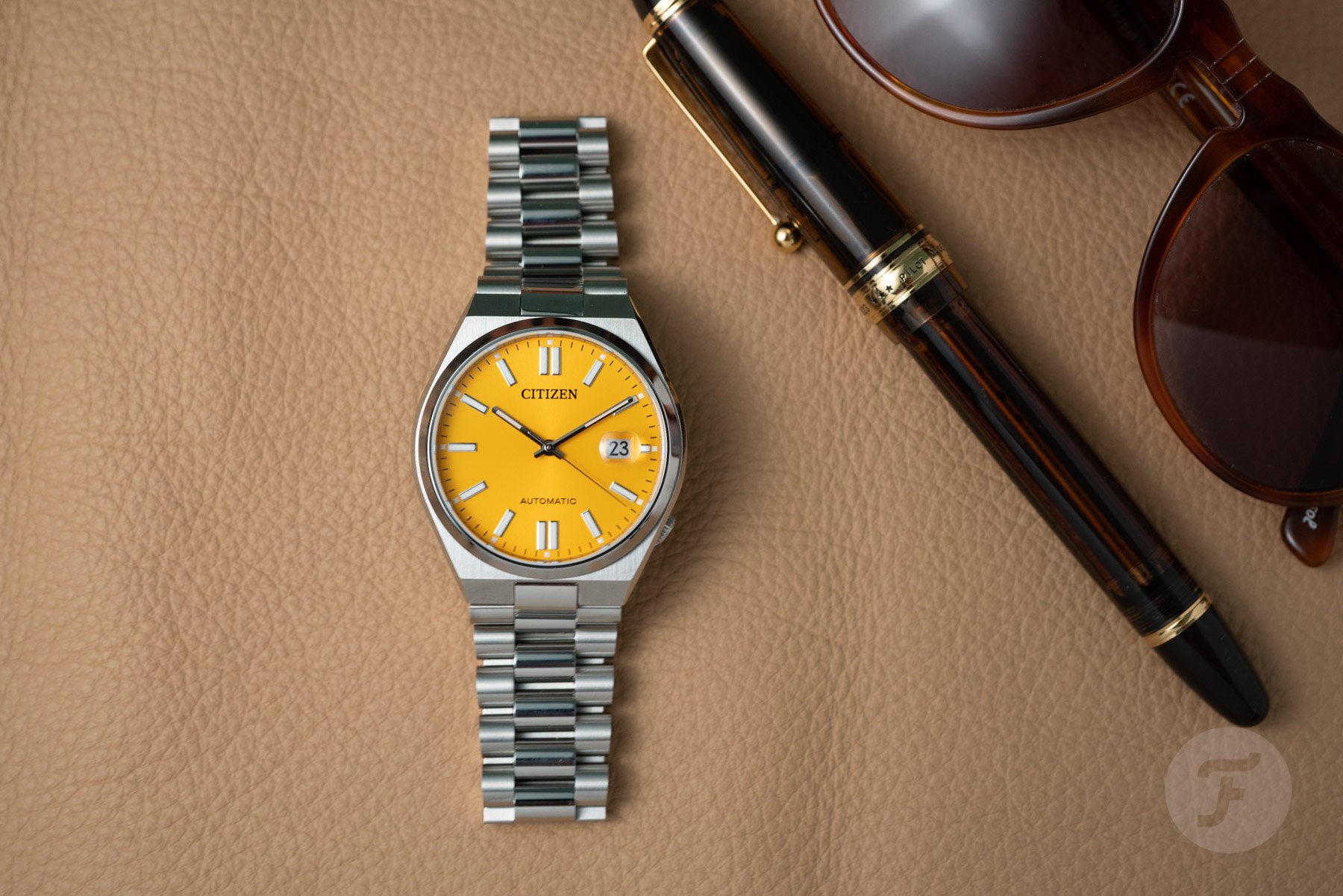 The Citizen NJ0150 comes in various colors. The yellow one I have here is the NJ0150-81Z. You can also find a green version (NJ0150-81X), a black version (NJ0150-81E), and a dark blue version (NJ0150-81L). We received the models with yellow, black, and blue dials, so I can’t comment on the green variant. The black and blue dials are perhaps a bit less fun than the bright yellow and green, but they’re worth investigating if you’d like to have an affordable watch with the “Oysterquartz style”. 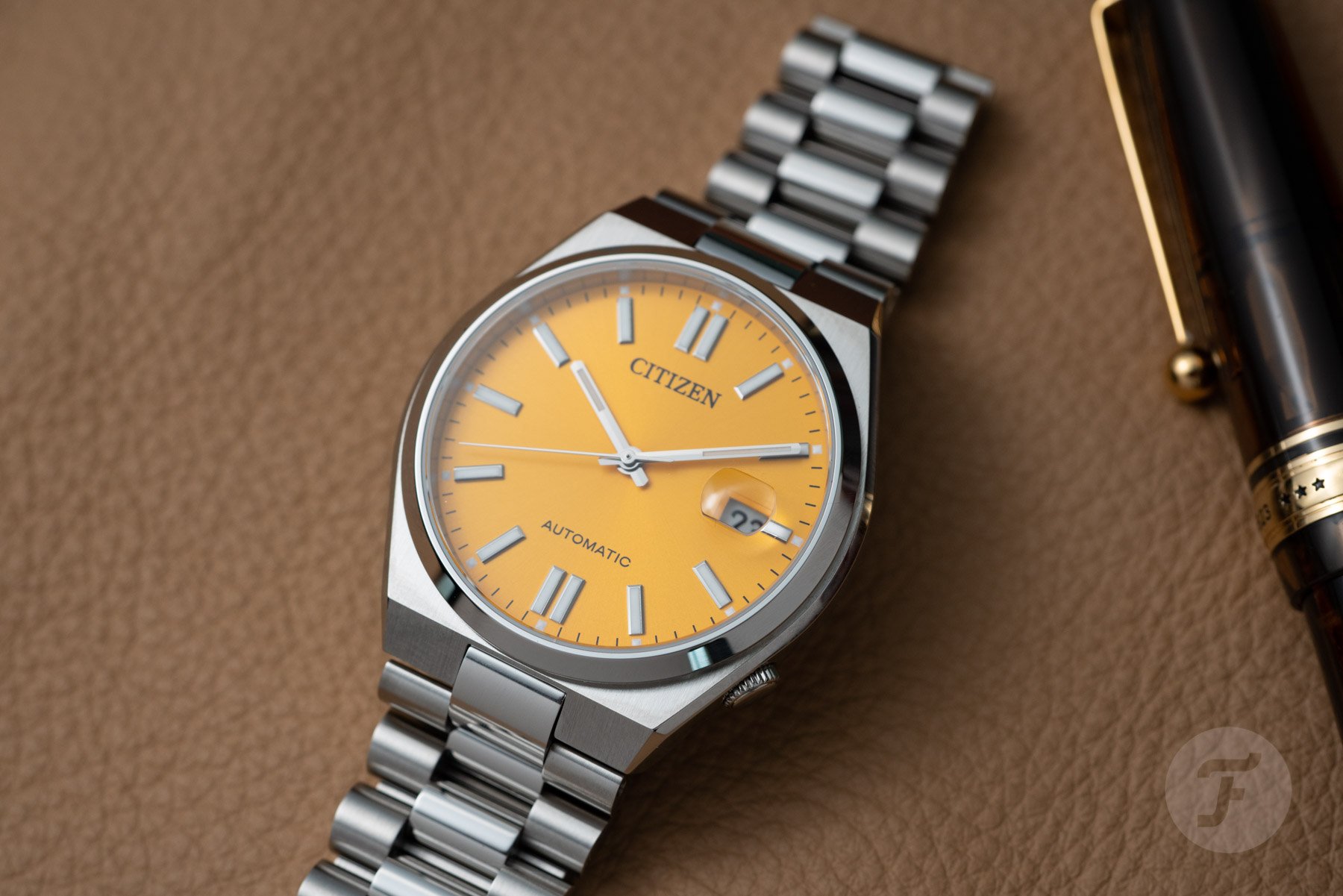 It’s not a perfect watch, nor does it claim to be. It’s just a fun watch, and the price justifies many of the shortcomings mentioned in this review. The watch has only been available in Asia before and is coming to Europe as of now. I noticed that some sellers are already offering it at a premium because delivery to places outside of Asia has not properly started yet.

To read more about Citizen, check out our articles here and visit the brand’s official website here. Let us know what you think of the NJ0150 in the comments!