With the new management at the helm at Breitling and the increased focus on appealing to Far-Eastern customers, you’d be forgiven for assuming classically styled timepieces, such as the Premier, were destined to become the norm.

Whilst Breitling is streamlining their collection, masculine timepieces tied to the military still have a strong resonance with the Breitling community.

Continuing the ‘Summit’ ethos, whereby Breitling uses their own platforms to announce new watches to their own schedule, a slew of revitalised and reenergised Avenger models were unveiled in October 2019. A noticeable facelift on the new Avenger was the bezel with fewer numerals on the scale, save only for the distinguished rider tabs at each quarter of the bezel.

Breitling Avenger on a Night Mission 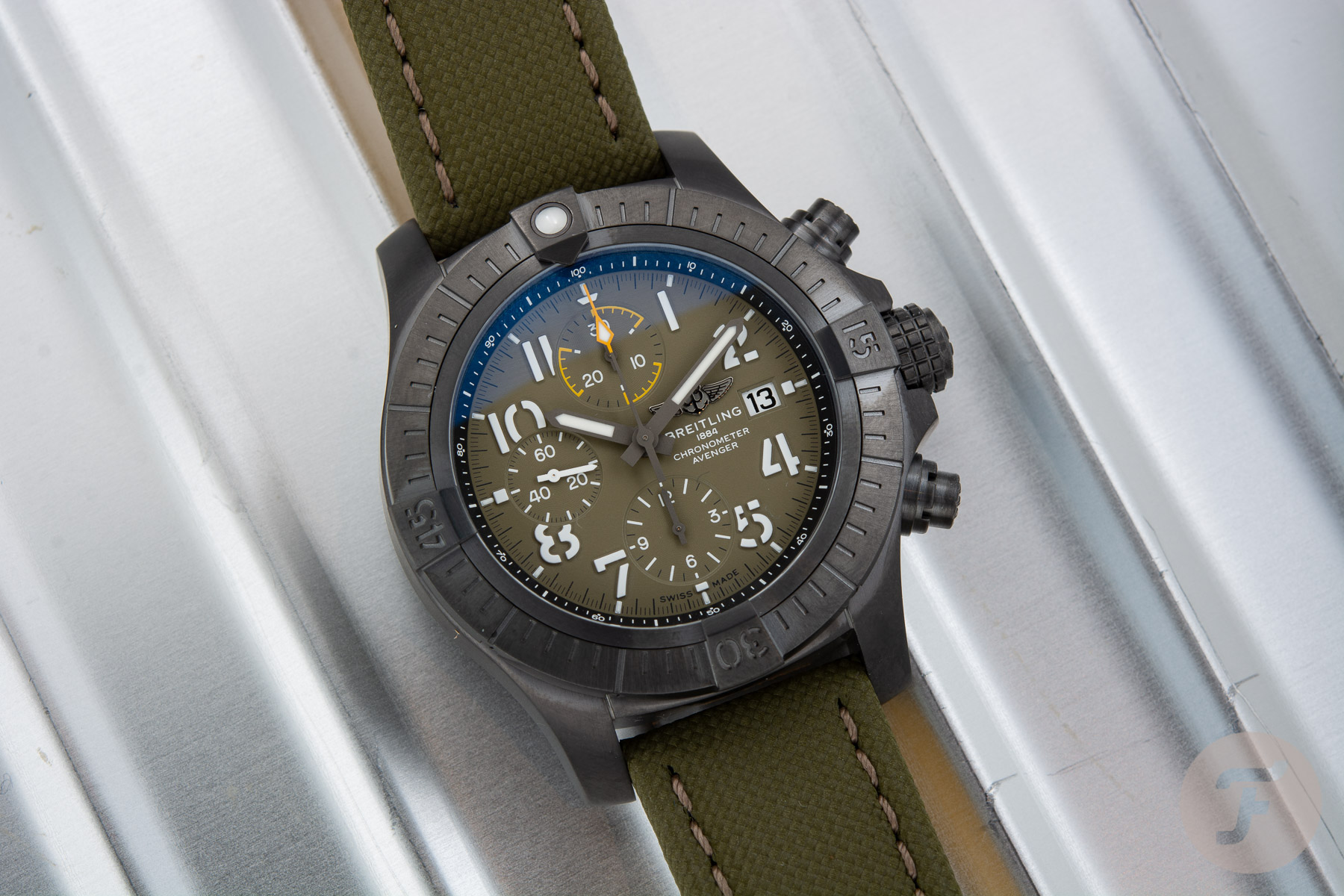 The model this article focuses on has the macho level turned up to 11; the military-inspired, khaki green Avenger 45 Night Mission. This chronograph features the 6, 9, 12 subdials signalling that powering the watch is the ETA/Valjoux 7750 derived movement rather than the Breitling B01 in-house calibre, which has a 3, 6, 9 layout. The applied ‘B’ wing logo sits between the 30-minute totaliser with five-minute colour-coded segments and a white date wheel. Oversized numerals are luminous and are in the style of military labelling whereby stencils are used to spray paint markers on vehicles and equipment. 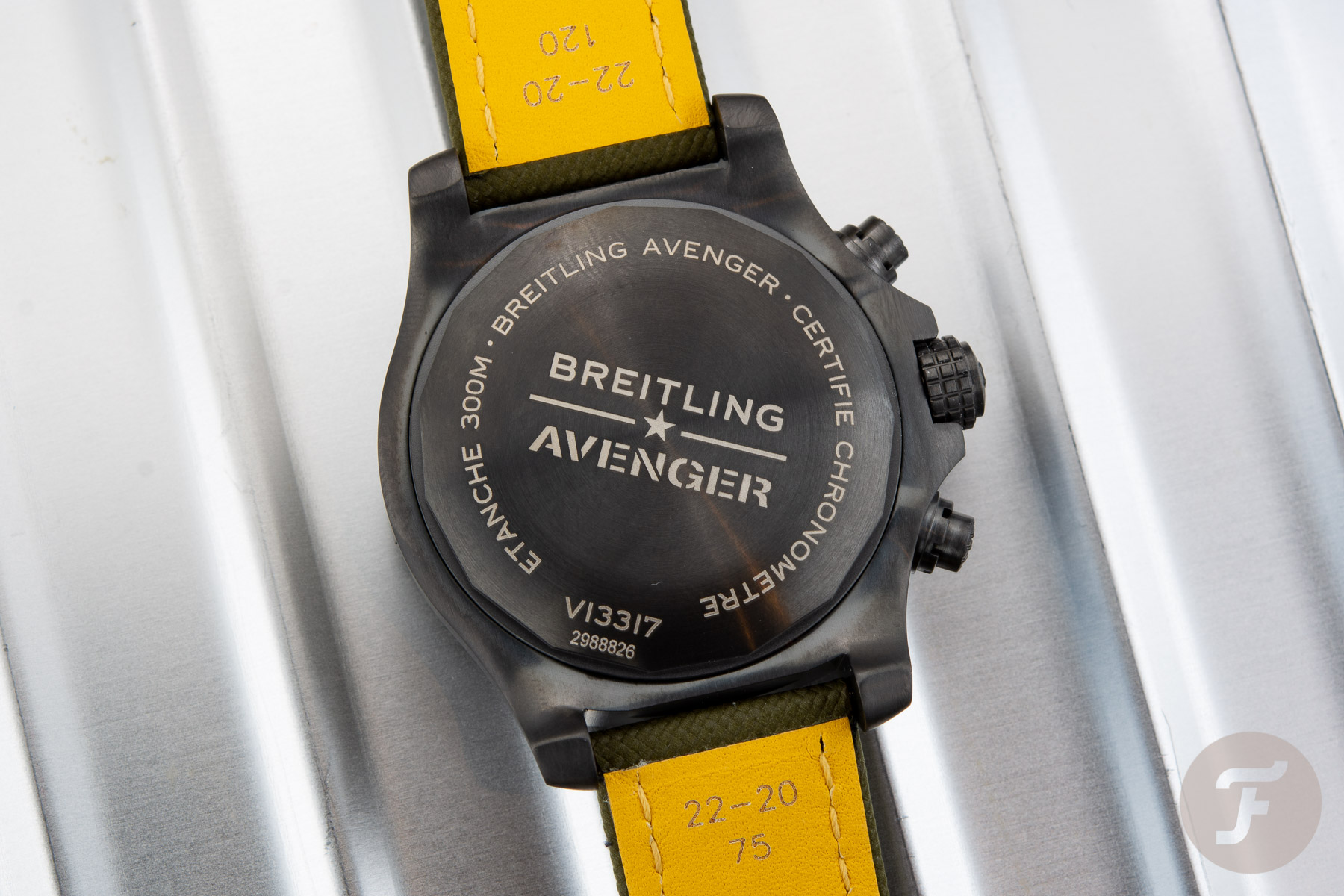 Solid caseback on the Avenger 45 hiding the Breitling 13 calibre

The 45mm case is black DLC (Diamond Like Coating) treated titanium, which is interesting for 2 reasons. Firstly, not too long ago, Breitling debuted the ‘Breitlight’ material with the Avenger Hurricane. A behemoth chronograph with a 24-hour time display in the 50mm proprietary polymer ‘Breitlight’ case. The advanced material had scratch resistance and lightness in its favour, but I can imagine was a tough sell. Plastic is generally associated with cheaper, mass-produced goods and not typically considered luxury. This could explain why Breitling elected to use DLC-treated titanium to achieve the black ‘Night Mission’ military style for this new Avenger 45. 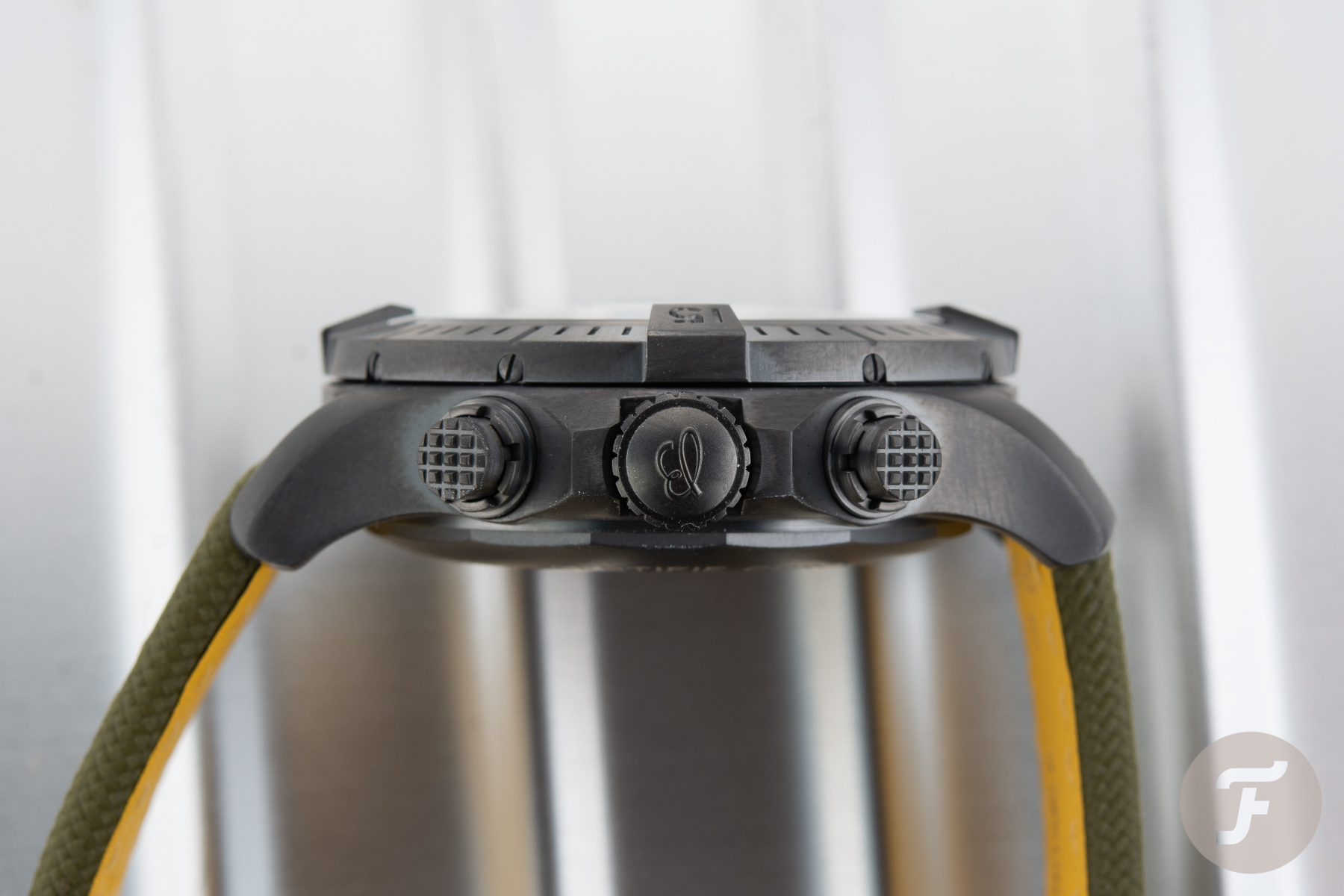 Secondly, DLC black coating is robust enough, but is still prone to scratching to reveal the base titanium metal underneath. This is non-recoverable and will be a permanent patina that some will appreciate, bearing their own unique battle scars, but those who regularly polish their watches to a factory shine may want to proceed with caution. The detailing on the crown and hash markings on the pushers are suitable to operate when wearing gloves in the cockpit or under the waves thanks to the 300m water resistance. 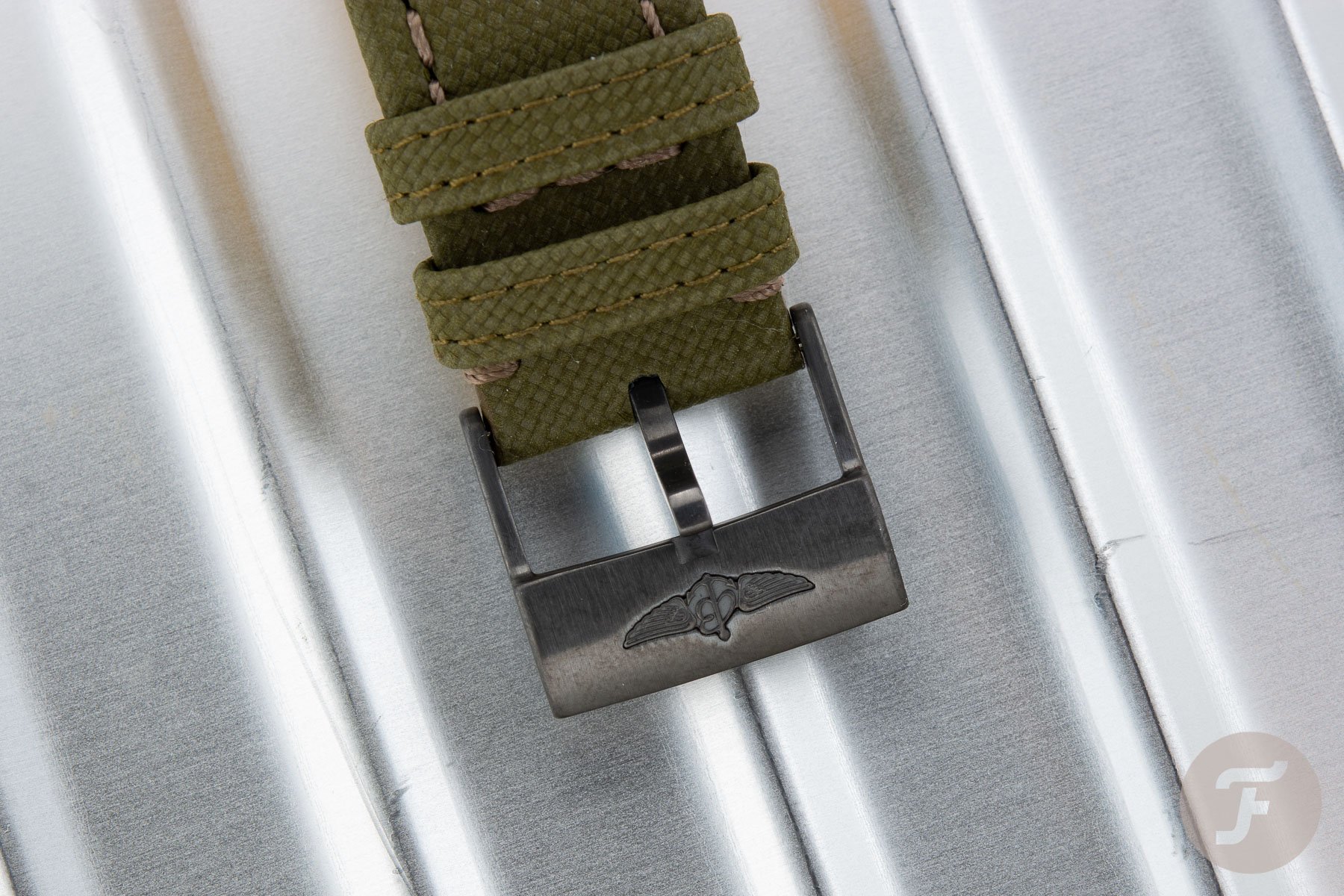 Black titanium on a tang buckle. Also available as a folding buckle

Securing the watch to the wrist is the matching khaki embossed leather strap with a tang buckle. The non-limited Breitling Avenger Chronograph 45 Night Mission is available for €5,750, priced around €1,500 less than the in-house equipped Avenger Chronographs.