The TAG Heuer Carrera 160 Years Silver Limited Edition watch launched back in January. As one of the brand’s most handsome releases this year, we’re happy to bring it back to your attention. Harnessing the old-school vibes of Heuer’s golden age, this Carrera adds a touch of after-dinner class to a collection that is, in its modern guise, far more sporty in style.

When you’ve been around for 160 years (as Heuer has), you can be forgiven for running out of model names. But it has to be said that TAG Heuer could have given its new Carrera any name under the sun and it would still be a handsome addition to the catalog. The new TAG Heuer Carrera (reference number CBK221B.FC6479) was a welcome return to the clean lines of the past. It is heavily inspired by the 1960s Heuer Carrera with reference 2447S that we covered in this article on Fratello. 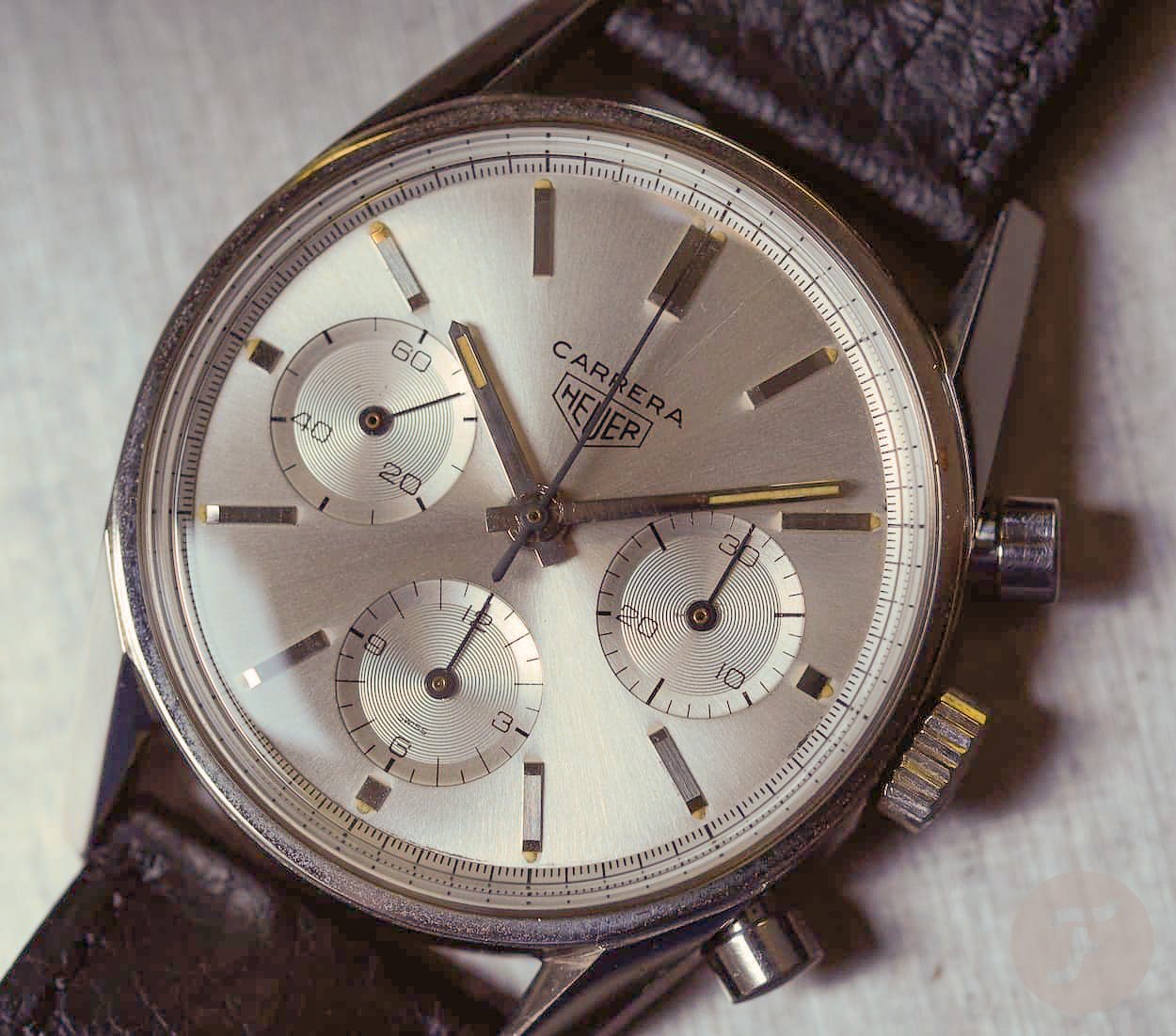 Let’s kick things off by mentioning the elephant in the room. There might be some more elephants, but perhaps the biggest elephant is the size of the watch. The original measured just 36mm. The modern update? A “whopping” 39mm. That kind of engorgement may tick off the die-hard collectors who love the 2447S. On the other hand, you could argue that the size increase is intended to attract a new audience. And after all, aren’t vintage collectors more concerned with vintage pieces rather than modern call-backs? Had TAG Heuer stuck with the 36mm diameter, it might have alienated the contemporary consumer.

Furthermore, it would be a real stretch to suggest that 39mm is “large” by modern standards. In fact, to many, 39mm represents the ideal size. It is possible to retain something of a vintage character while satisfying the modern desire for greater wrist presence. 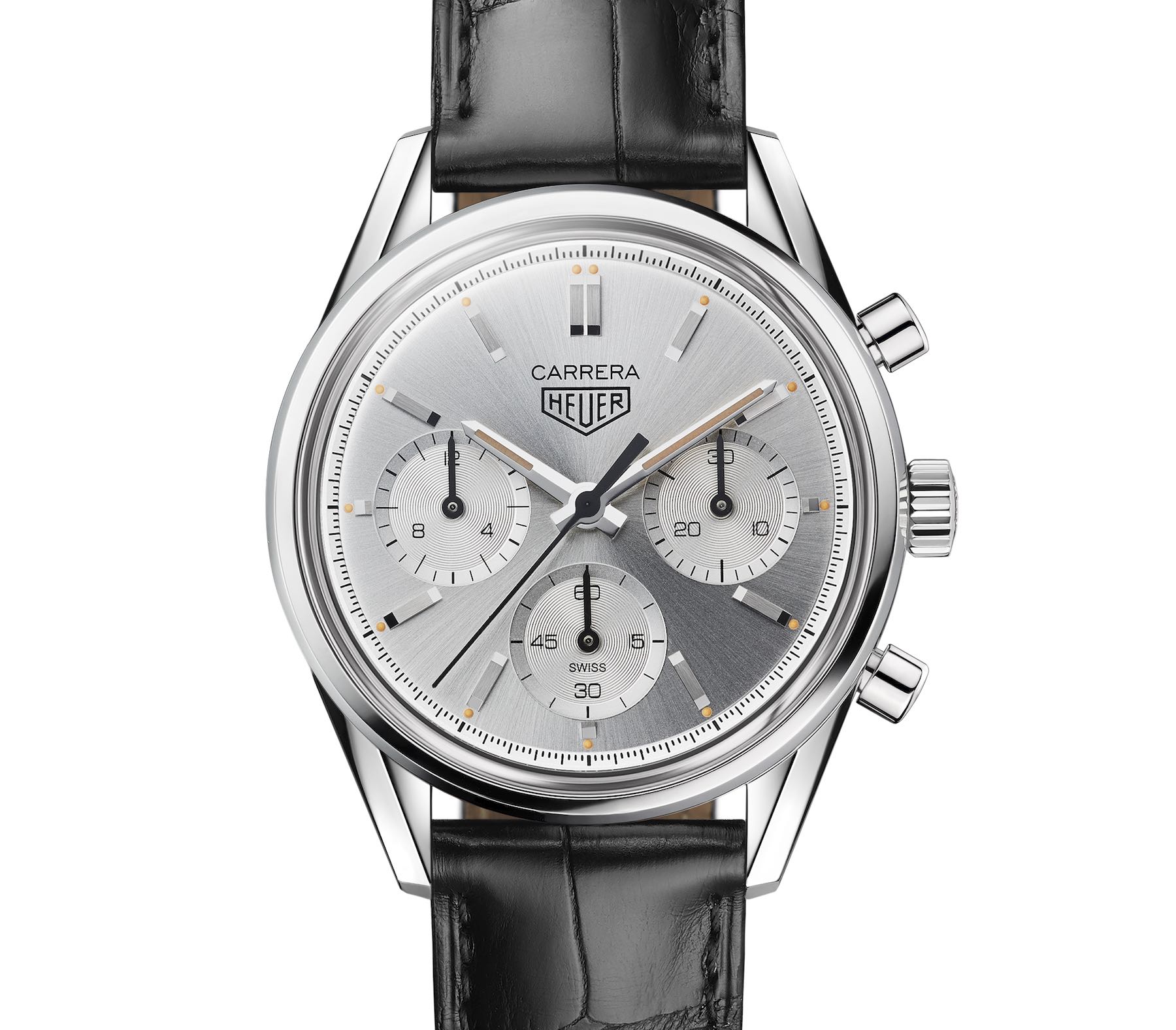 It all makes perfect sense

The rest of the watch is pretty rad. TAG Heuer did really respect the design of the original Carrera. It is interesting to see that the brand is not too shy (nor proud) to put the former company name on the dial. This is a neat touch. Modern TAG Heuer branding would have diluted the aesthetic. The sunburst finish of the dial and the circular-grained sub-dials look awesome. And the finish of the applied hour markers is top-notch. It all makes perfect sense.

Caliber 02 is a worthy choice for this re-edition…

What also makes sense, is the use of their in-house caliber Heuer 02 movement. Sure, a hand-wound chronograph movement would come closer to the original Carrera 2447S, which was powered by the famous Valjoux 72 chronograph movement, but this caliber 02 is a worthy choice for this re-edition. The use of this Heuer caliber 02 movement does change the position of the running seconds compared to the Valjoux 72. Instead of 9 o’clock, the running seconds are now at 6 o’clock, swapped with the hour counter of the chronograph. The minute counter remains positioned at 3 o’clock.

Heuer’s caliber 02 is a column-wheel chronograph with an 80-hour power reserve. The display back makes this caliber 02 movement visible for the owner of the new Carrera 160 Years Silver Limited Edition. Furthermore, the watch is water-resistant to 100 meters (another modern advantage). 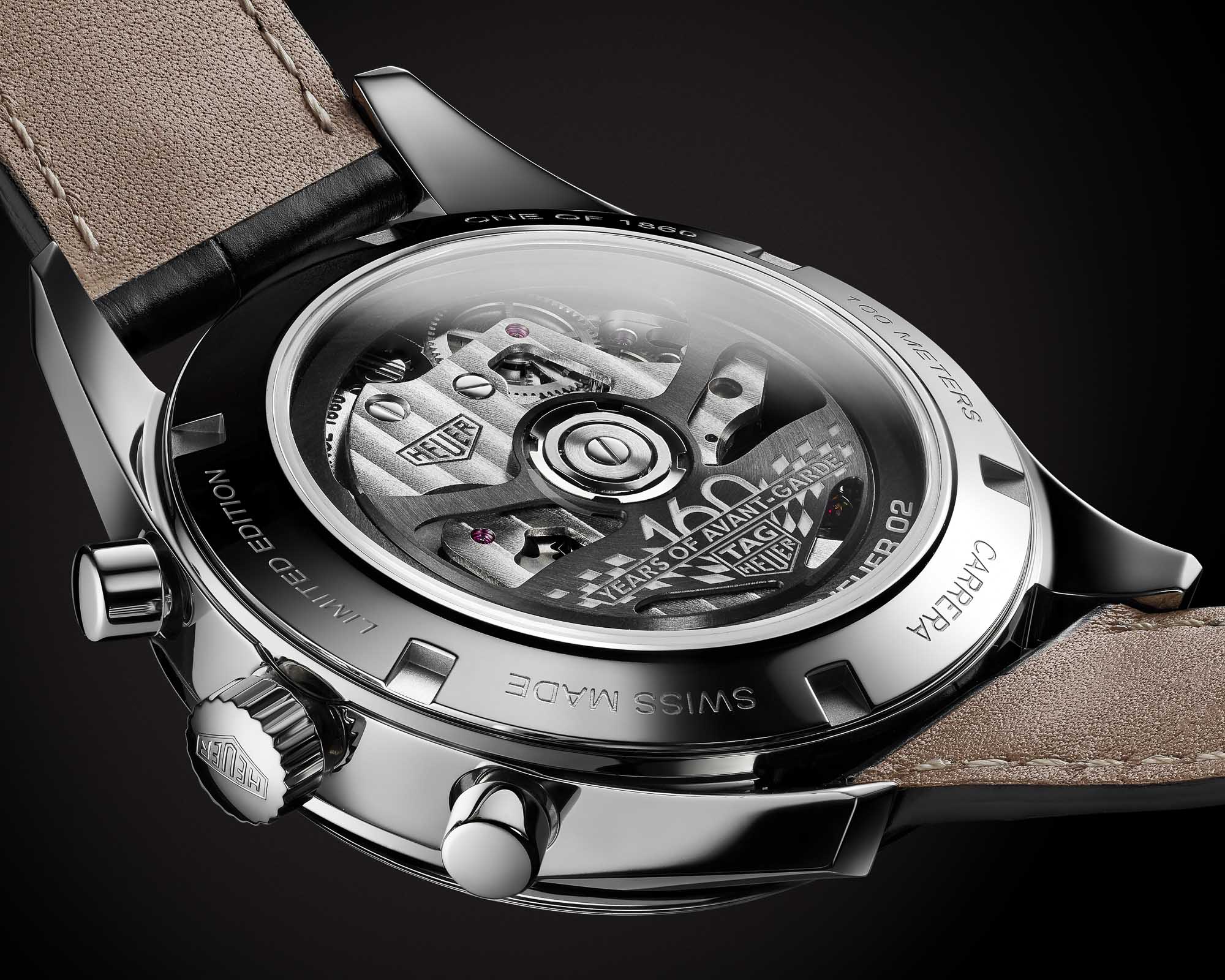 I really like this TAG Heuer Carrera 160 Years Silver Limited Edition, despite the increase of 3mm in diameter. Even the price, at $6,450, seems fair value. Another elephant in the room that I didn’t mention before, is the fact that this watch has been limited to 1,860 pieces, commemorating Heuer’s year of foundation. I don’t mind it being a limited edition, but I would have loved to see this in the regular collection.

…a great piece to test the water…

Hopefully, it is a sign of things to come. The industry is in dire need of an established name to step up to the plate when it comes to producing more sympathetically-sized chronographs in a classic, sporting style. The TAG Heuer Carrera 160 Years Silver Limited Edition watch is a great piece to test the water and to gauge consumer demand for this kind of model. But if this model lacks a bit of color in your book, TAG Heuer has a vibrant alternative for you… 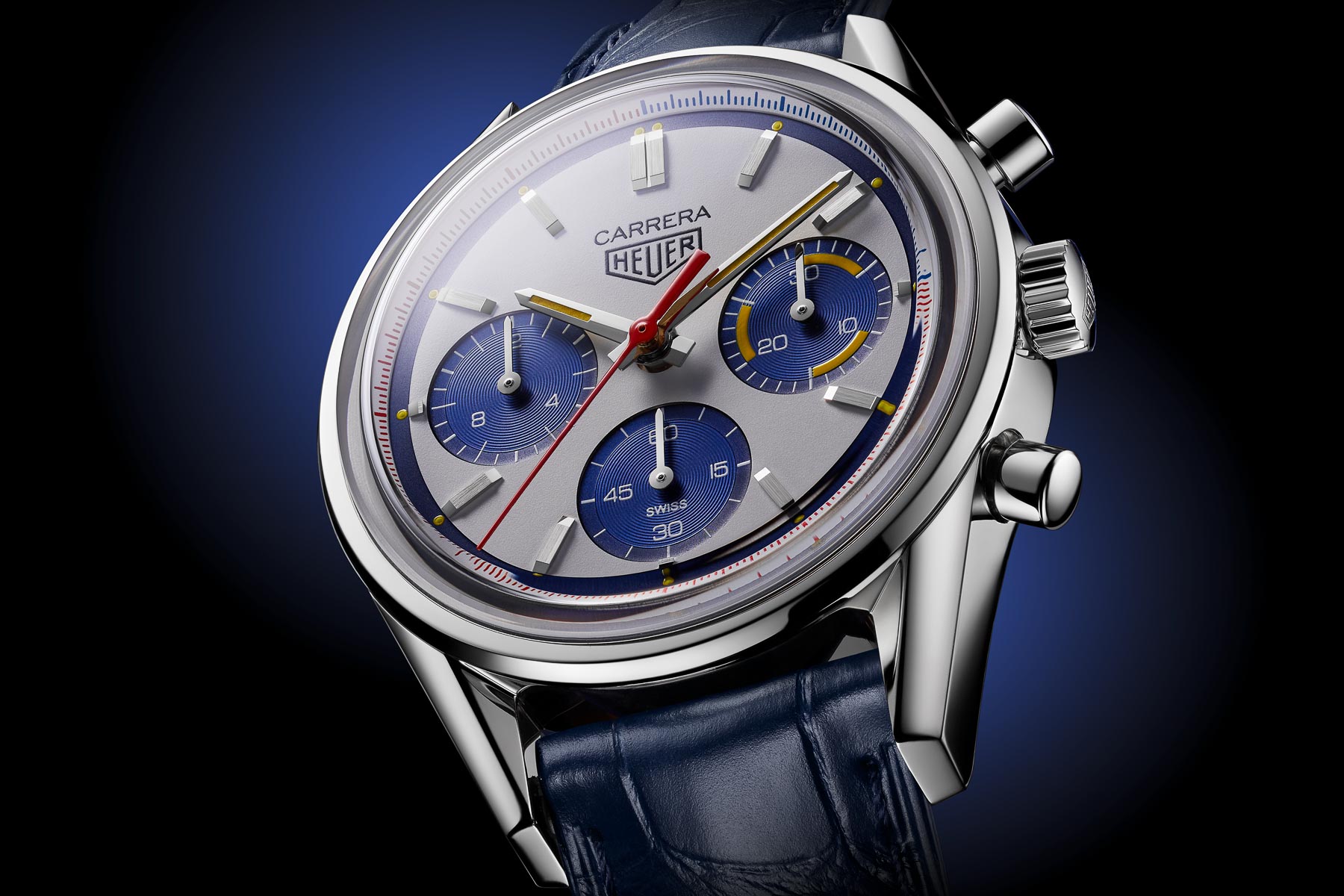 Here we have another fine reimagining of a classic colorway. The modern TAG Heuer Carrera 160 Years Montreal Limited Edition is also delivered in a 39mm stainless steel case with the familiar “Glassbox” construction. It isn’t the same case as the original Montreal edition from 1972, but I for one am glad to see this striking dial design presented in a more modern alternative. This one is limited to just 1,000 pieces and will likely speak to a younger audience that remembers the early days of Heuer’s association with motorsport and the bright colors that typified that era. 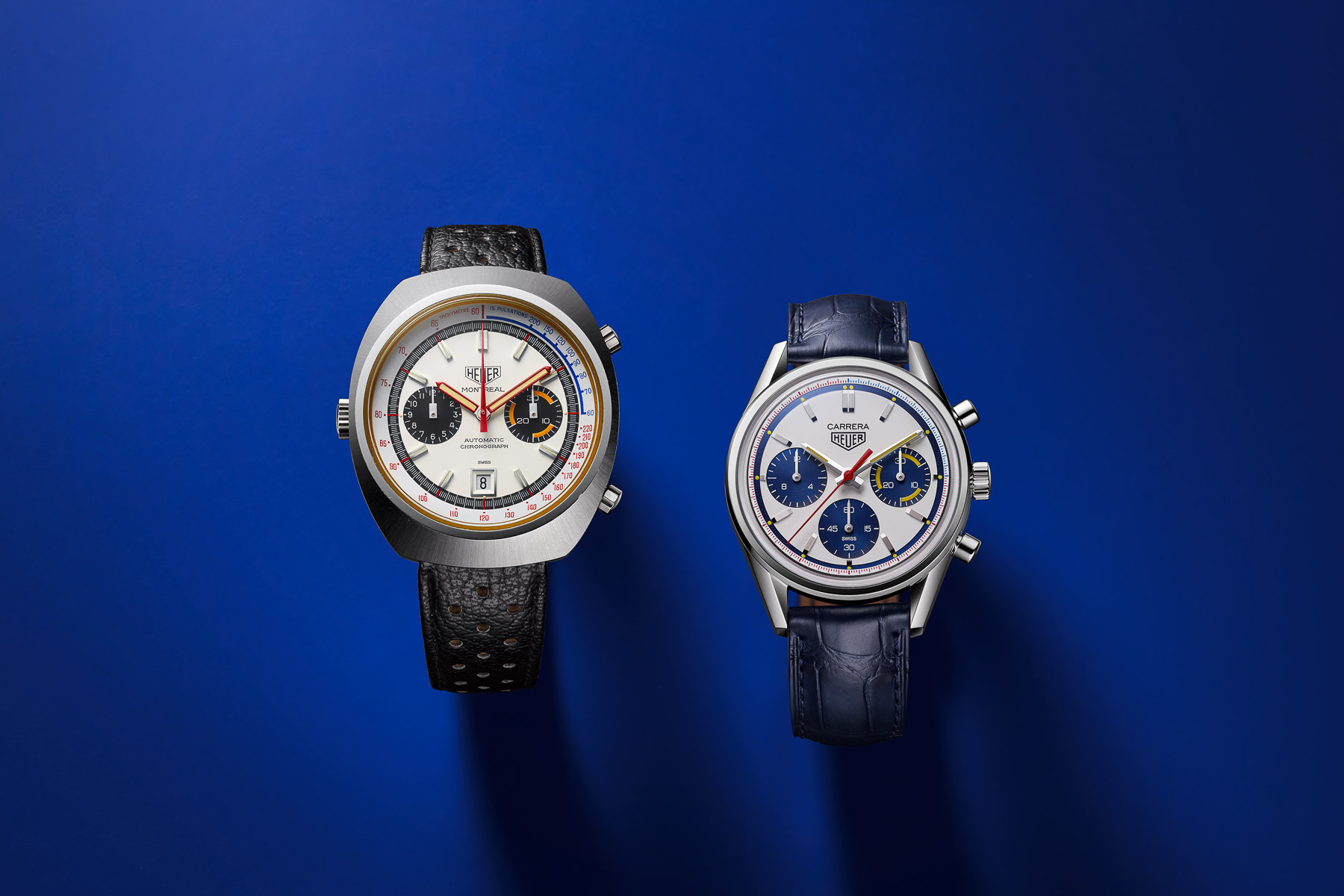 As you can see from the above comparison shot (and the solo-shot of the original Montreal below), this is a really liberal upgrade. It is rare for me to say this, but I actually prefer the overall look of the modern issue. Sure, the 1972 version has oodles of throwback cool, but it just isn’t as wearable, nor as versatile as its successor.

This limited edition features blue, yellow, and red highlights on its dial and a blue leather alligator strap. The in-house Calibre 02 automatic also powers this three-register chronograph. The Montreal comes in at €6,400 and has been available since July. But tell us, which of these celebratory chronographs do you prefer? Is it the suave silver version or the far fruitier Montreal limited? Please vote in our poll and let us know your thoughts in the comments section also. More information via TAG Heuer online.