How The Oris Big Crown 1917 Became My Wedding Watch

Hundredth-anniversary wristwatches do not come around that often. Especially watches that are recreations of designs of the time, yet still appealing to today’s consumer. In 2017, Oris kept the faith in one of its original Big Crown pilot’s watches from 1917. This is my story about how and why the Oris Big Crown 1917 became my wedding watch.

The story began in March 2017. I, along with some friends, found myself in the Oris Baselworld booth enjoying the hospitality. Soon after, a dapper-dressed fellow by the name of Matt Miller, aka @sunflowerman on social media, arrived. Miller is accustomed to sketching inside showrooms, on trade-show floors, and at famous landmarks. Even whilst surrounded by onlookers. He prefers the ambiance of the environment rather than taking shots of his subject and finishing the artwork in private. This process, I think, lends his art a sense of place and time — capturing the lively atmosphere.

Oris put Sunflowerman in the spotlight.

Some brands embrace this, whereas others kindly request him to leave — something Miller has gotten used to. However, in the Oris Basel booth, Miller was given special treatment. During his arrival, Oris was already placing a table and chair in the booth directly under a spotlight. A time-lapse camera was positioned over his shoulder to capture the watercolor painting as it unfolds. The booth staff were welcoming passers-by to join in and observe the live painting with complimentary food and drink. 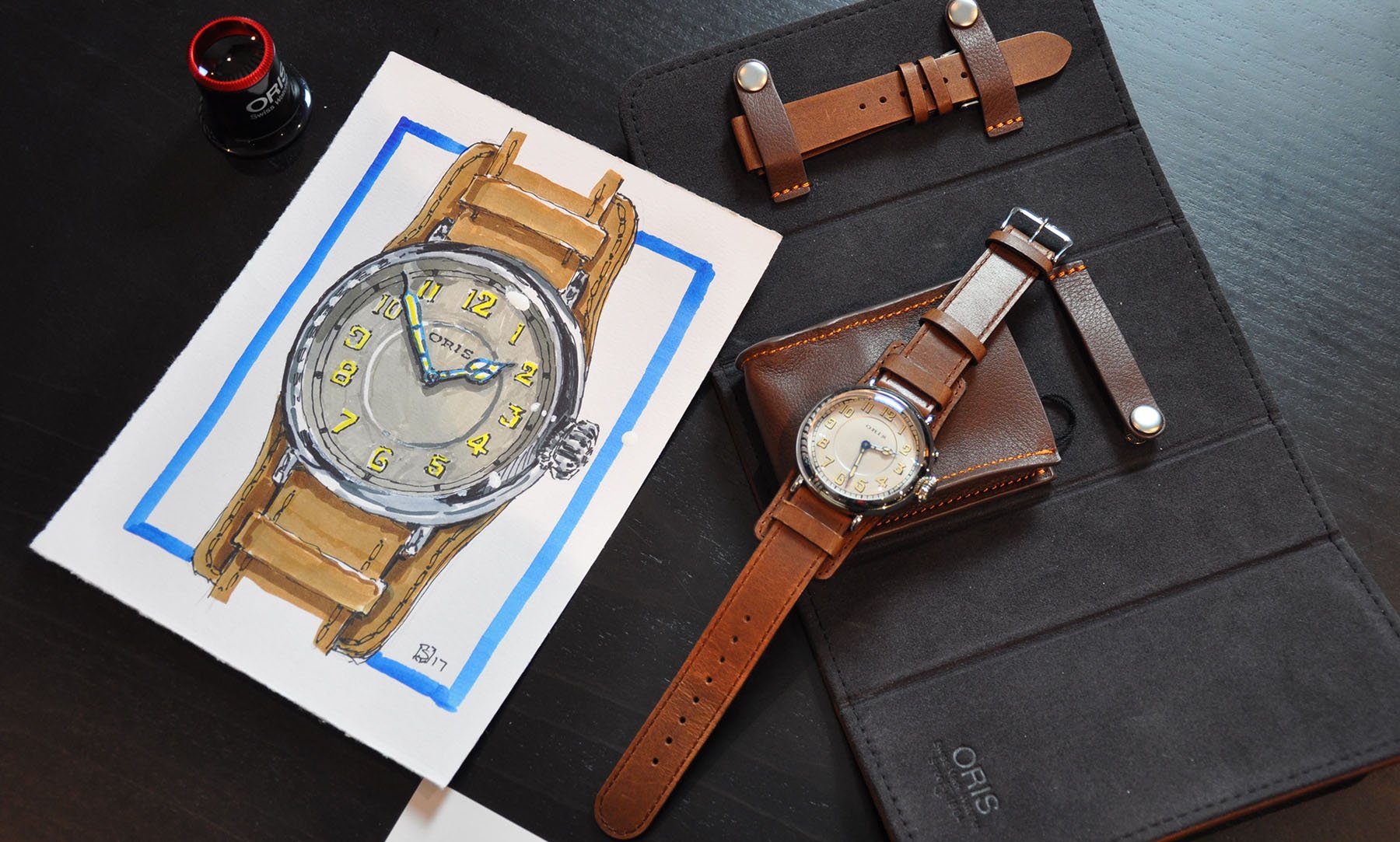 This level of consideration, not only to Miller but guests as well, really widened my eyes to Oris. This independent brand revels in creativity and expression. The watch, or “muse”, for Miller to apply his watercolor painting skills? The Oris Big Crown 1917. At first, I was busy mingling. But as 60-minutes went by, seeing the painting come together made me appreciate the design of the Big Crown 1917 even more.

Flying under the radar, the Oris Big Crown 1917 was quite a surprise release. Oris made a strong comeback in 2015 with the successful reinterpretation of the Divers Sixty-Five. Likewise, the 1917 remains faithful to the beautiful source material. And yet it has strong, contemporary appeal. Despite this, the “1917” didn’t spawn various versions or offshoots like the 65. Instead, as the name suggests, it was limited to 1,917 pieces. 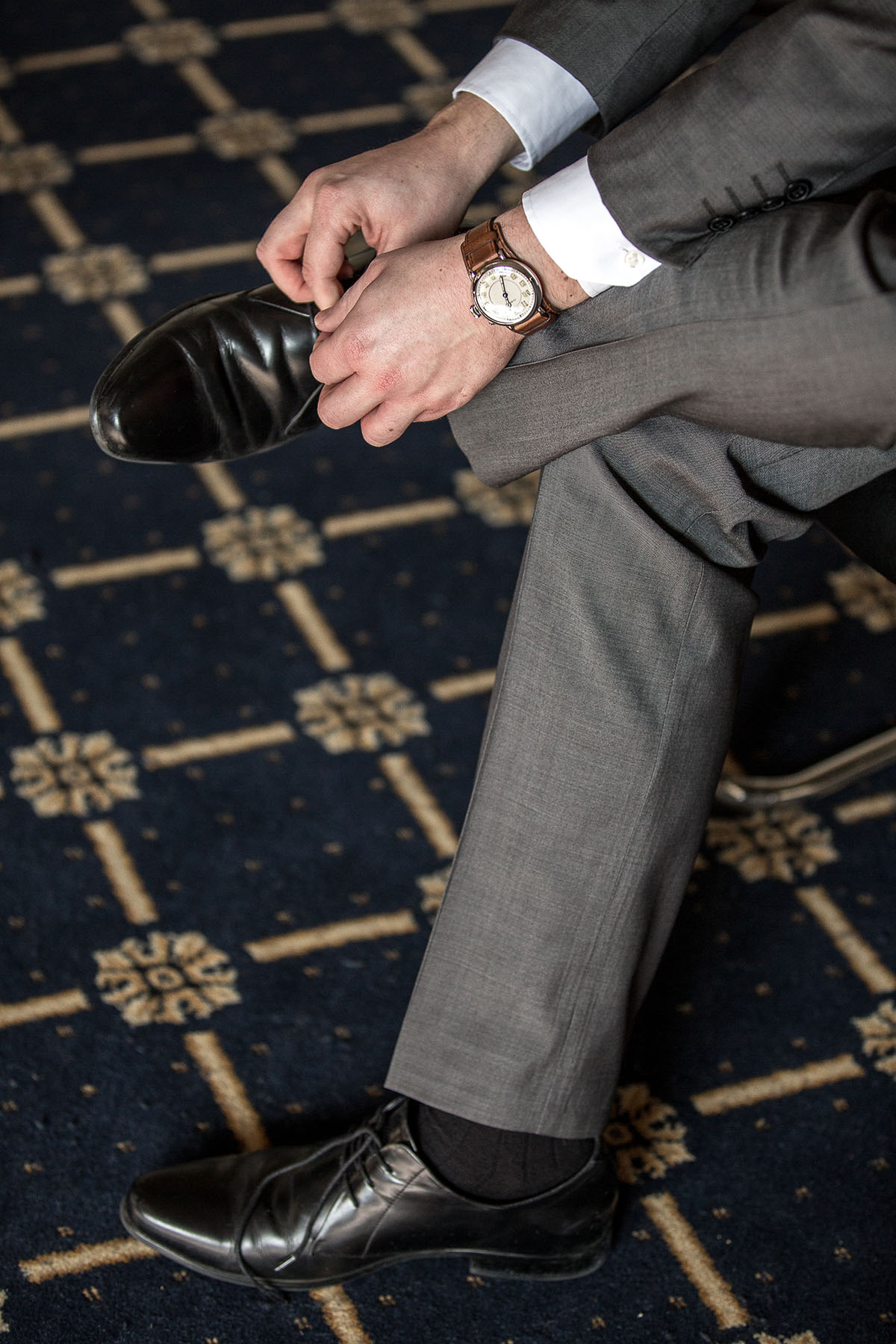 The print of the final painting still hangs proudly in my living room. But as the wedding planning began, I came to the realization the most critical item was missing. Not the rings, the suits, or the cake — but the wedding watch (priorities, I know). My collection was pretty nice at the time, but none felt appropriate for the special day. I had the Breitling Aerospace — far too digital for a day of tradition. The Omega Speedmaster was a strong contender but gave the impression that I would be tracking the day with the chronograph.

A wedding watch needs to be simple and classic.

My dive watches also felt too bulky with a jacket sleeve. Instead, I was looking for an understated time-only watch with a clean dial. Plenty to choose from, I must add, but it had to feel special. It was not until I gazed upon the 1917 print on the wall that it became apparent. The unveiling of the 1917 in watercolor right before my eyes was a special moment. It was within the same year and at my very first Baselworld event. 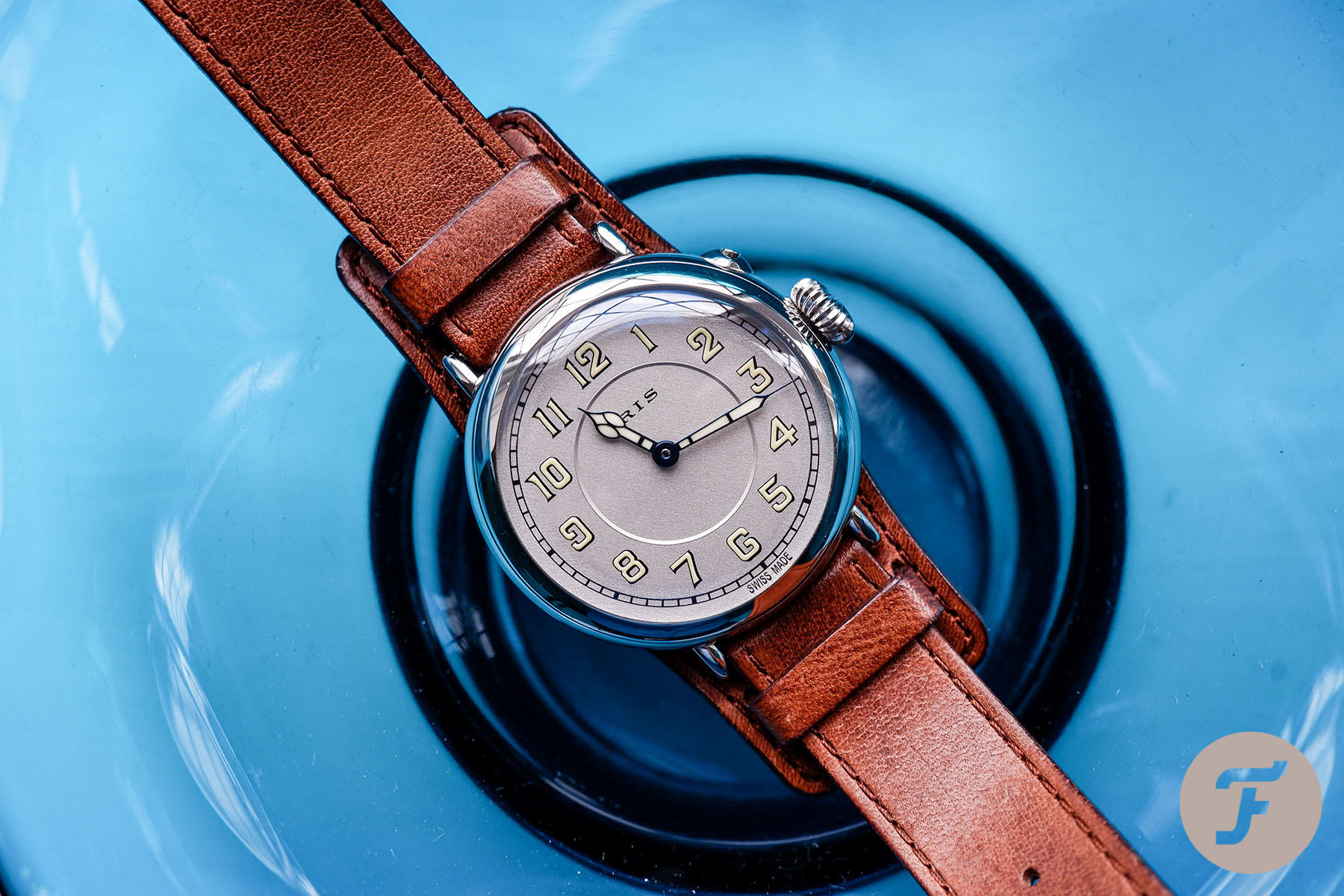 Without hesitation, I put my order in for the watch. There was a catch, though. All 1,917 examples of the timepiece were already pre-sold to authorized dealers. My local jewelers were only ever going to receive one Big Crown 1917. In the past, this meant fierce competition to own the limited editions. This was especially true when it came to the first Oris Divers Sixty-Five Carl Brashear in bronze. Honestly, that’s regional ADs for you. I did have a good excuse, though. Making it known that the 1917 was intended for my wedding day put me at the top of the list.

Finally, the print became a reality.

With less than a month leading up to the wedding day, I was getting nervous. Not for the day itself but rather because I was fretting over whether the 1917 I had ordered was going to arrive on time. I was waiting in the car while my betrothed was trying on the dress, unseen by me, when I received the call. Finally, that print in the living room that was a constant daily reminder would become a reality — rewarding my patience with the very watch it depicts. 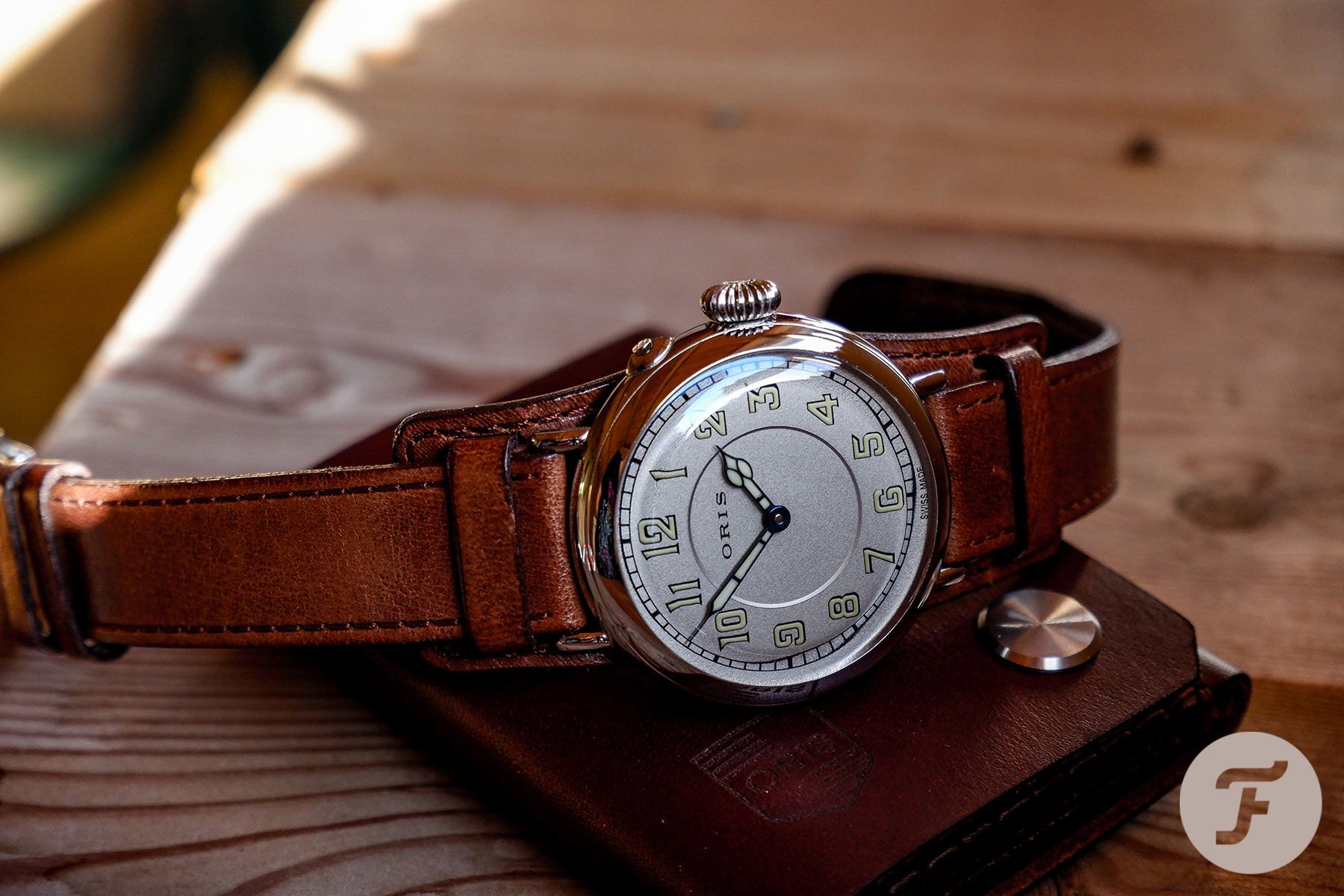 The quality of finishing was the first thing that struck me out of the box. I had seen it before, but there was something about how the daylight bounced off the polished surfaces and refracted in the double-bubble sapphire crystal. It elevates this 1917 beyond its price point — something Oris is renowned for. I knew I had made the right choice but refrained from wearing it too often before the actual day. 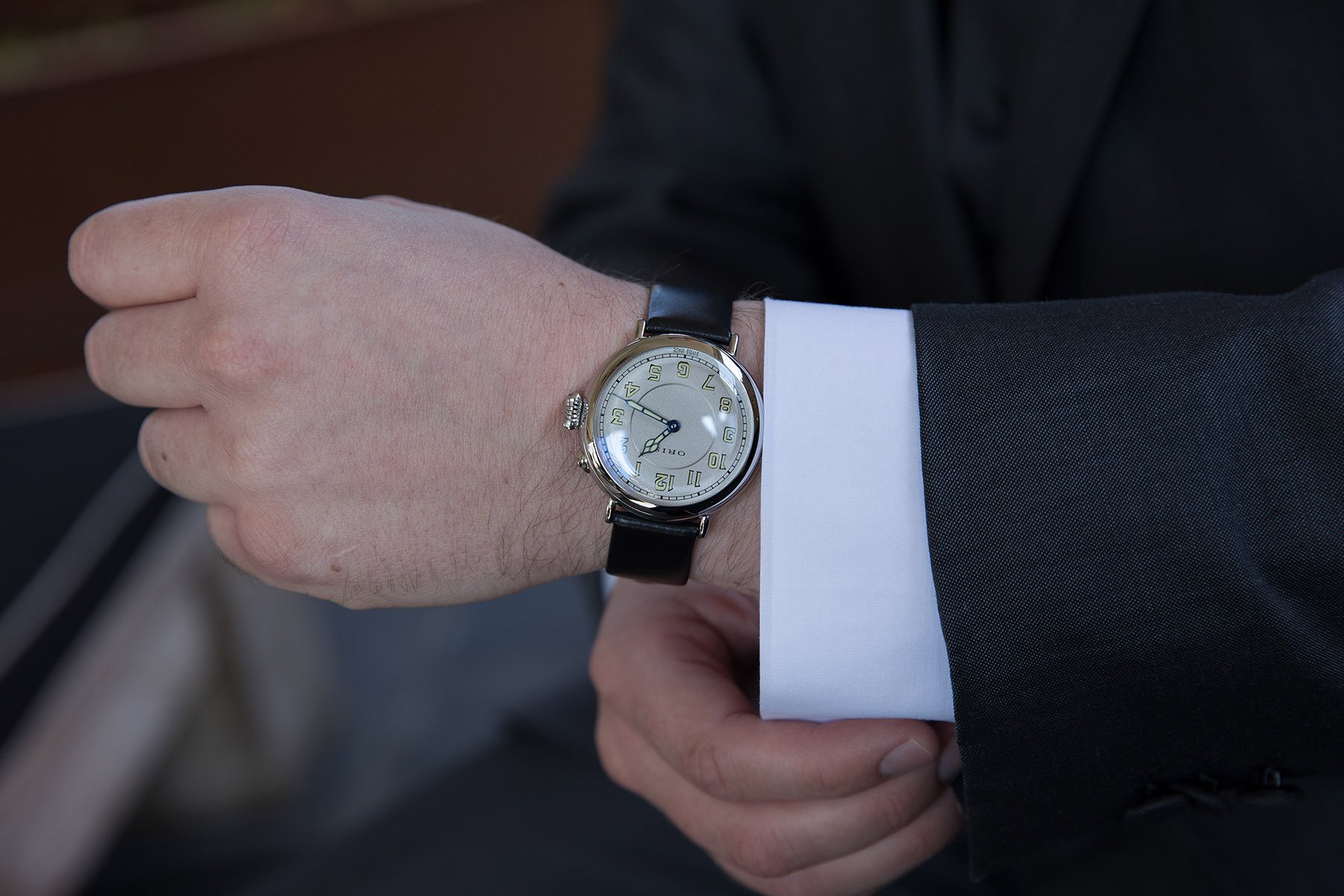 For the day, I swapped out the brown bund strap to a simple Hirsch two-piece black calfskin. It was to match the black belt and shoes for the day. Yet I do prefer the 1917 on the quintessentially vintage bund — or Bundeswehr if you prefer — brown leather strap. With this strap, the watch is supremely comfortable throughout the day. No matter what I’m doing, I never feel the need to take this watch off to give my wrist a break. The soft lining is always in contact with the skin, so it hugs the wrist all day.

The button in the 2 o’clock position is not, as some people assume, the opening of an officer’s style case-back. This watch has a solid steel case-back with the vintage “OWC” logo. Actually, the button is depressed to set the time in the first position and released to wind the watch. The crown does not pull out at all. I am a bit sad the watch is not manually wound as winding it with that eponymous big onion crown is very satisfying. Perhaps this is my only gripe, as I am ultimately smitten with the Big Crown 1917. And it performed admirably on the day of the wedding.

Setting the time on the Big Crown 1917

The smooth steel 40mm case shows striking similarities to a soft pebble, which is accentuated by its thin lugs. The lugs themselves have a handy spring bar strap attachment. But the narrow 18mm strap disguises this to mimic the original’s wired loop lugs. This style of watch is inspired by old pocket watches, converted for the wrist by the addition of soldered wire lugs. Beating away inside this shiny, “wire”-lugged pebble is a Sellita-made caliber for peace of mind. 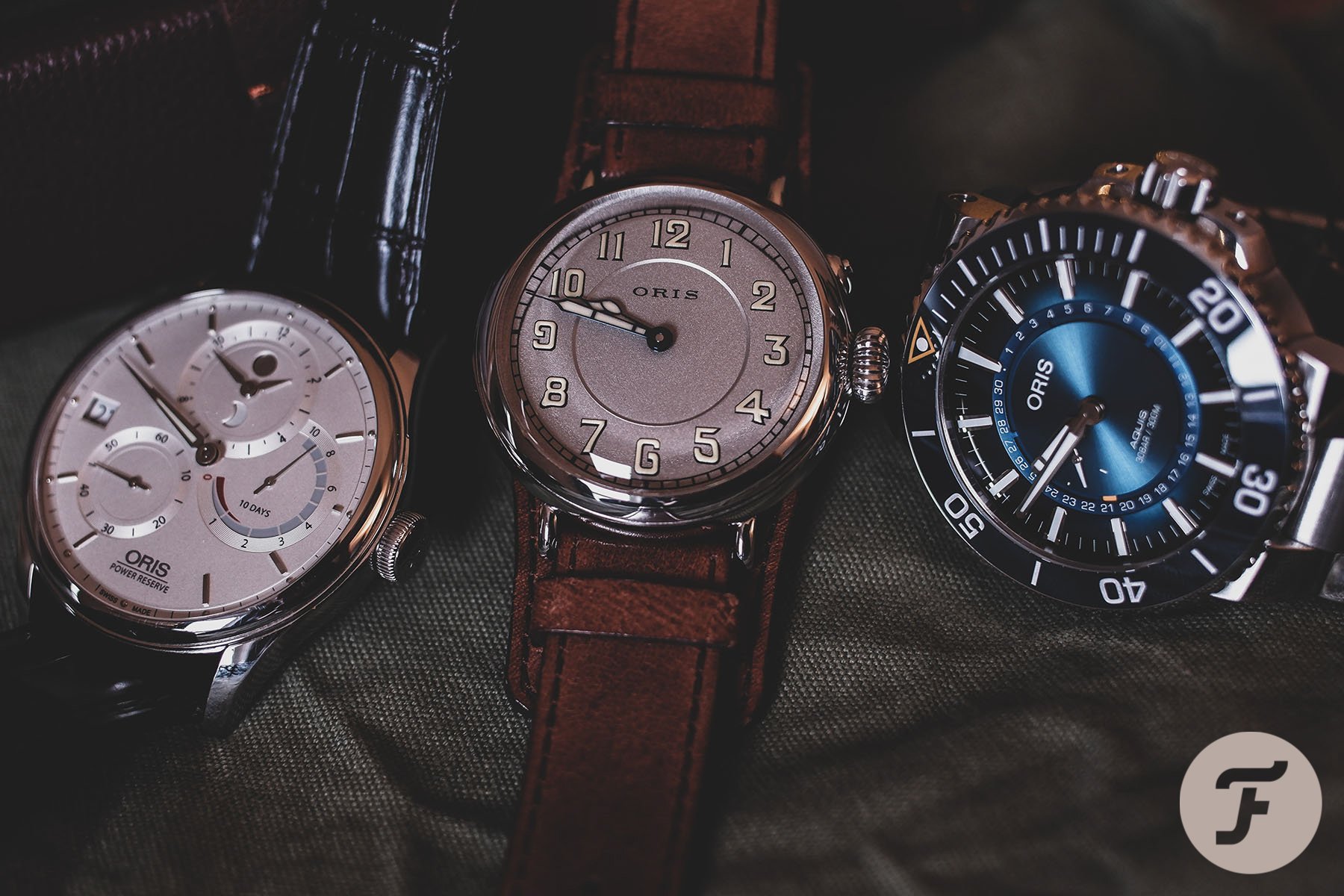 The creamy dial works well against the blued steel, cathedral hands, and pre-aged Arabic numerals with a generous amount of luminous coating. Overall, it’s a great look and with the brown leather cuff or non-cuff strap, both of which come in the vintage leather watch box. Be sure to check out more from Oris on Fratello here. And if want, swing by Matt Miller’s online store to check out some more of his artwork.