Grail Watch, an initiative by our friend Wei Koh (Revolution, The Rake), proudly presents its second release with the Frank Muller 30th Anniversary ‘Tribute’ Chronographs. This set consists of no fewer than three stunning chronographs, all built to pay tribute to those Lemania-powered 1990s Franck Muller chronographs that made watch collectors go crazy.

Although my interest in watches only took off in the second half of that decade, I vividly remember the Franck Muller watches from those days. Not least of all, this is because many authorized dealers of Franck Muller watches in those days had the same crazy demand — sometimes also paired with robberies — as some of the trophy watches of today. It was the brand that many celebrities wore at the time, long before the Nautilus and Royal Oak got any form of attention. The Franck Muller Master Banker, for example, was a highly desirable watch in those days. 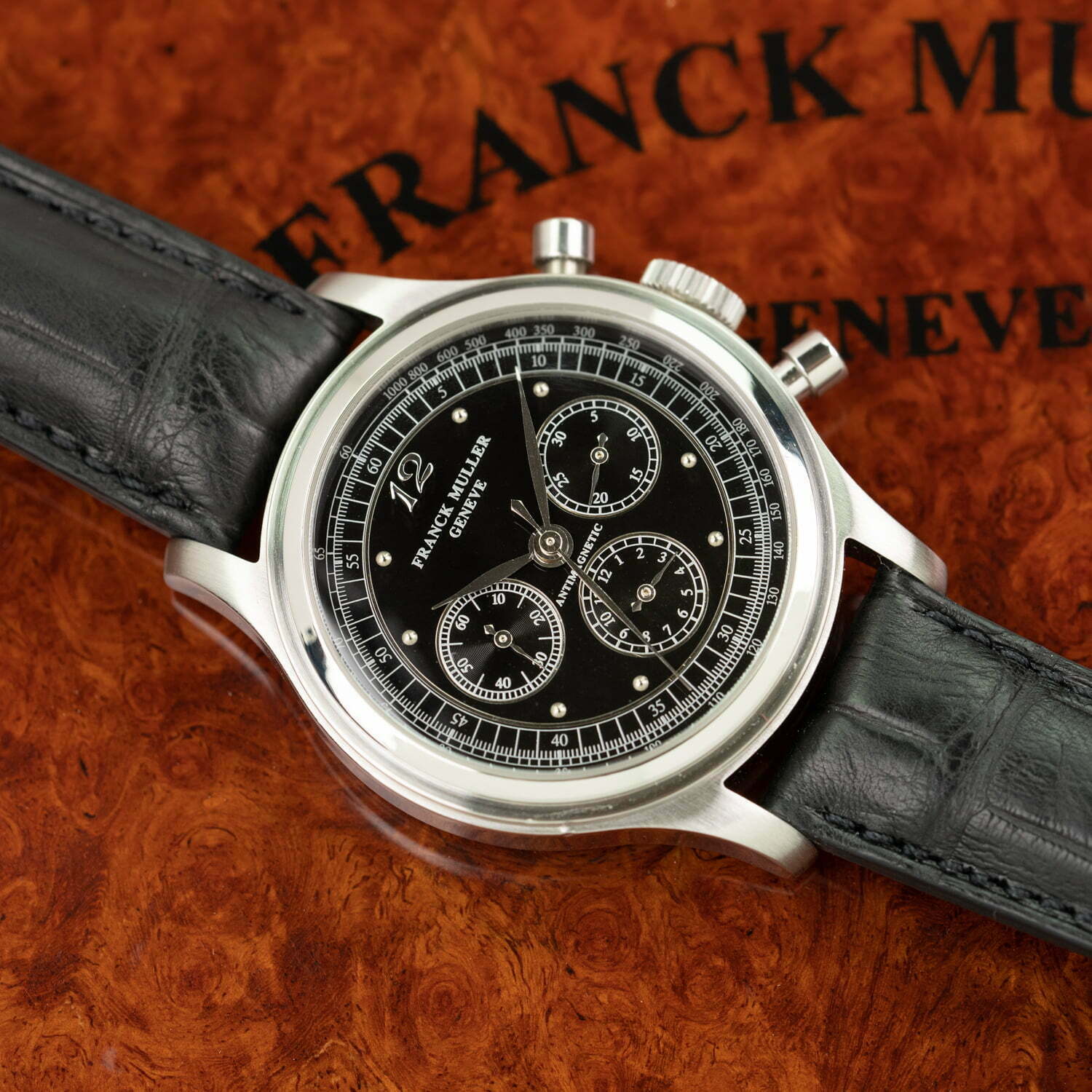 Image courtesy of our friends at Amsterdam Vintage Watches

But let’s step in time even a bit further. Franck Muller was already a gifted watchmaker at a young age, having started when he was just 15 years old. He even won a Rolex for achieving the top prize at the Watchmaking School of Geneva. He turned it into a fully functional perpetual calendar (now that’s modding!), making it look like a Datejust with a Patek 3940 vibe. 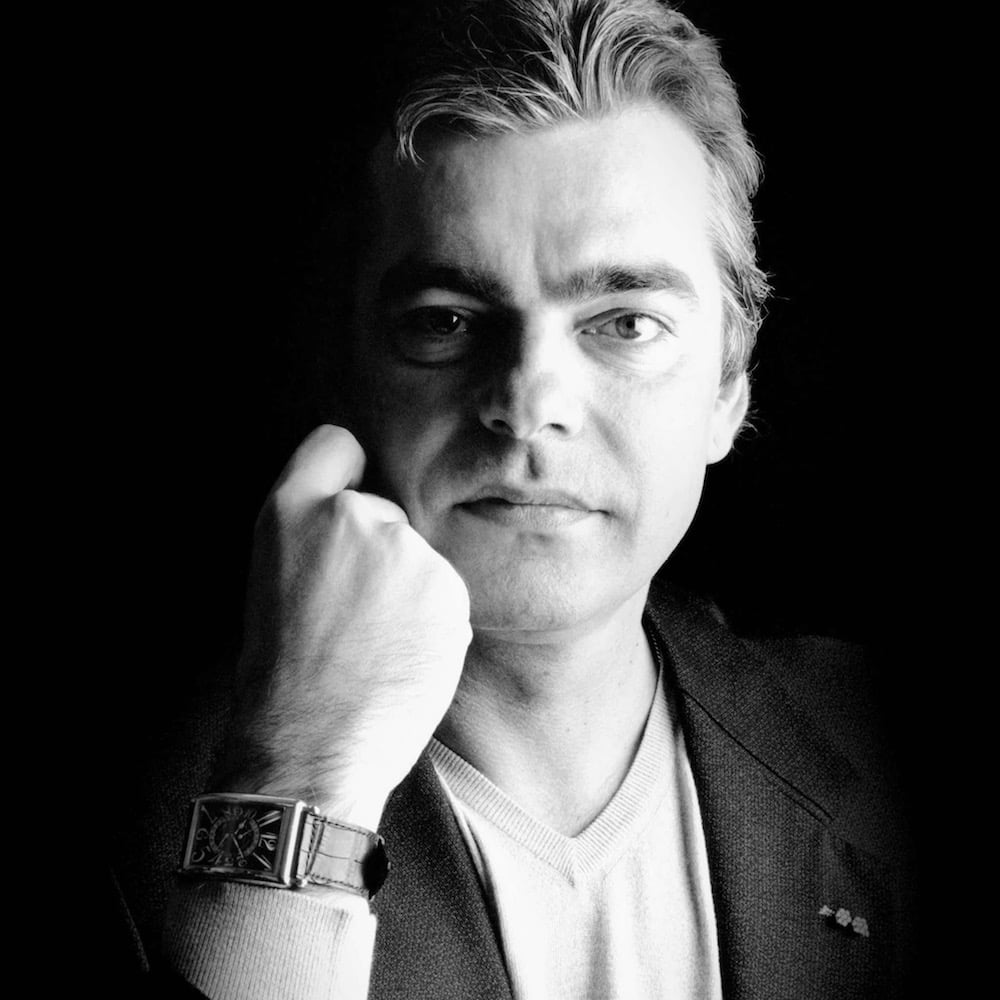 He even showed it to Rolex in Geneva in an attempt to sell the brand his modified Datejust design. Needless to say, Rolex turned his proposal down, but that didn’t stop Muller from producing a few of these Datejust perpetual calendars anyway. One even ended up on the wrist of rapper Jay-Z.

Muller kept experimenting with new designs and movements, including a tourbillon. Meanwhile, he restored vintage Patek Philippe watches, including assignments for the brand’s museum. 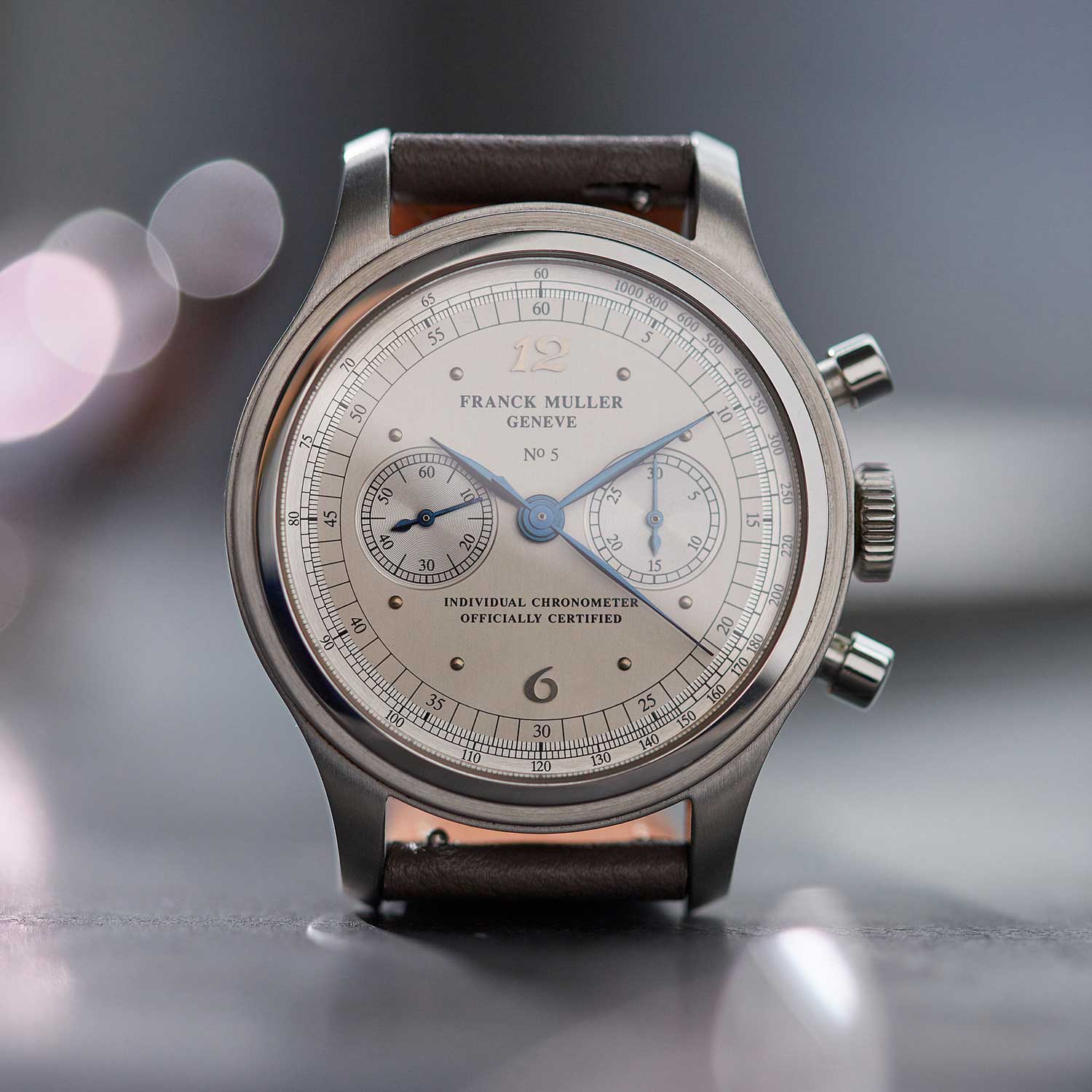 His love for chronographs

It wasn’t until 1991 that he founded his own watch brand. He named it after himself, of course, because that’s what most watchmakers do. Franck Muller, the brand, was born, and very quickly, Muller’s love for the chronograph mechanism started to show. His fascination for chronographs showed in being one of the first — IWC was actually the first — with a split-seconds movement based on a Valjoux 7750. In the 1990s, Franck Muller introduced a number of chronographs. They included some stunning 36mm and 37mm models with Breguet numerals and Lemania movements inside. Aesthetically, these watches were similar to some Patek Philippe watches of the time. Whereas the Pateks in those days used nicely decorated Lemania 2310 calibers, Franck Muller based his on the 1874 movement. Both movements (albeit with less ornate decoration) also powered the Omega Speedmaster. 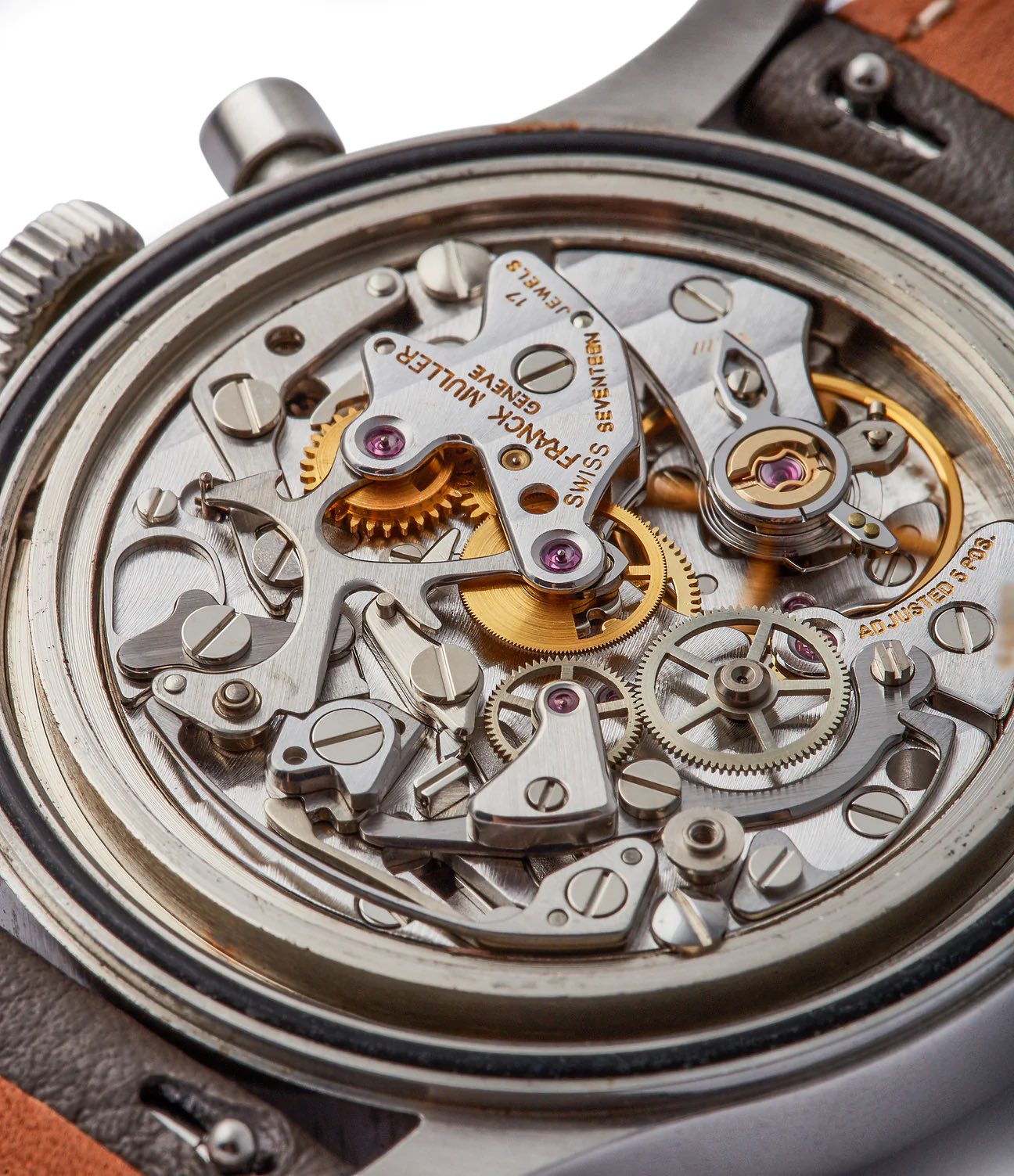 But perhaps more importantly, these Franck Muller chronographs utilized steel cases. A very special Franck Muller watch was the Double Face Rattrapante chronograph, based on his modified Valjoux 7750 movement. This caliber, FM-7000, enabled the owner of the Double Face Rattrapante to use it on both sides. That’s right; on the front was a dial with hours, minutes, and seconds as well as the split-second chronograph, and on the backside, there was another chronograph seconds hand. The reason for this was that Muller loved the functionality of the chronograph, be it in combination with a tachymeter, telemeter, or pulsation scale.

What Muller didn’t like, however, was that using all these scales on one dial makes it very cluttered (and unreadable). So, as you’ve already guessed, the solution for him was to design a chronograph with two sides. It’s not constructed very differently than Omega’s Speedmaster Silver Snoopy Award 50th Anniversary with the flying Snoopy on the back. That neat little automaton also functions thanks to its direct link to the chronograph seconds hand. 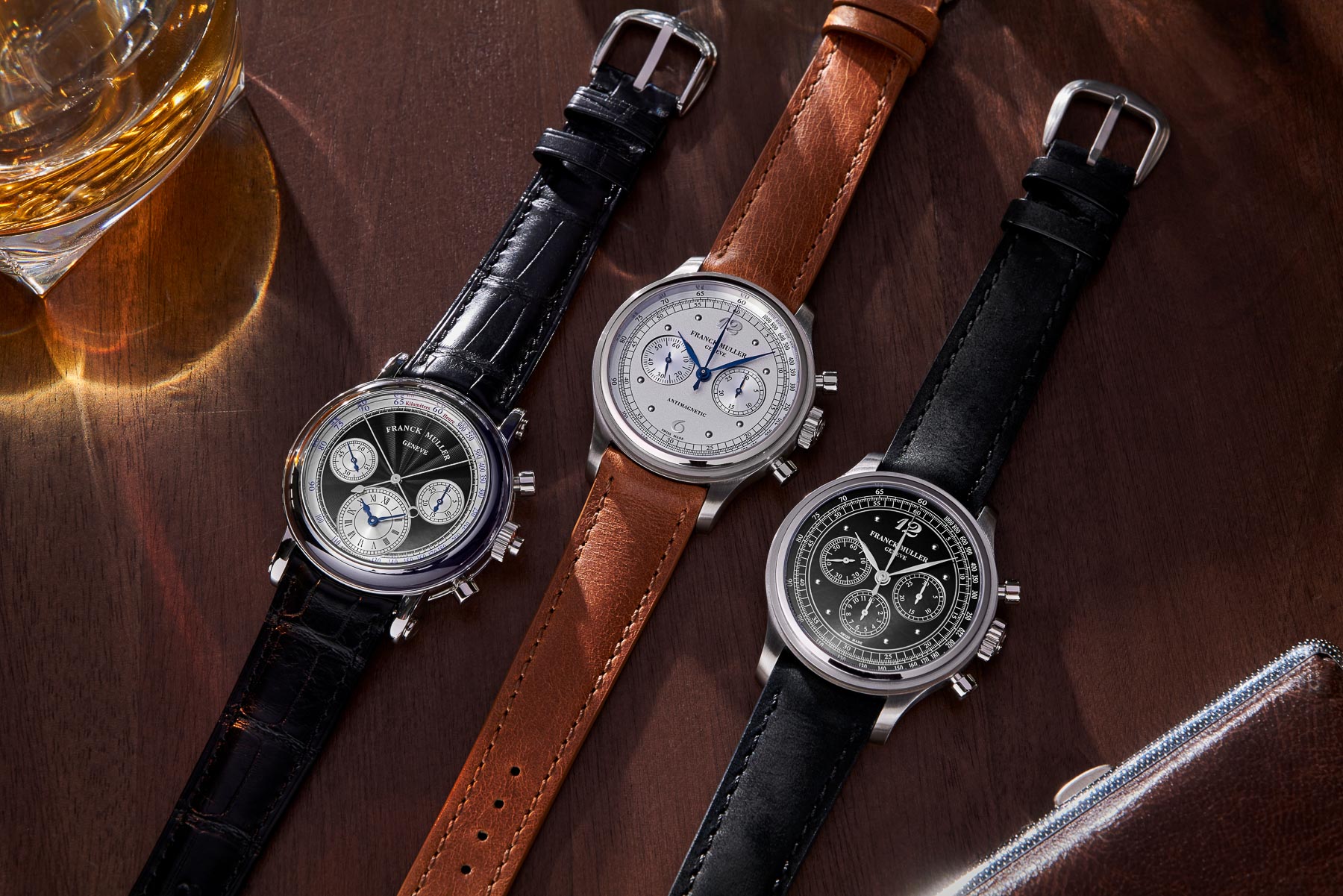 To make a long story short, Wei Koh was so intrigued by these Franck Muller chronographs from the 1990s (I have the feeling that he also has a soft spot for that wonderful decade) that he reached out to the brand to ask if these beautiful pieces could see a revival. He received the Franck Muller team’s fullest attention, and they became so enthusiastic that they searched their archives and found unused Lemania 1874 movements for the new Grail 2 watches. 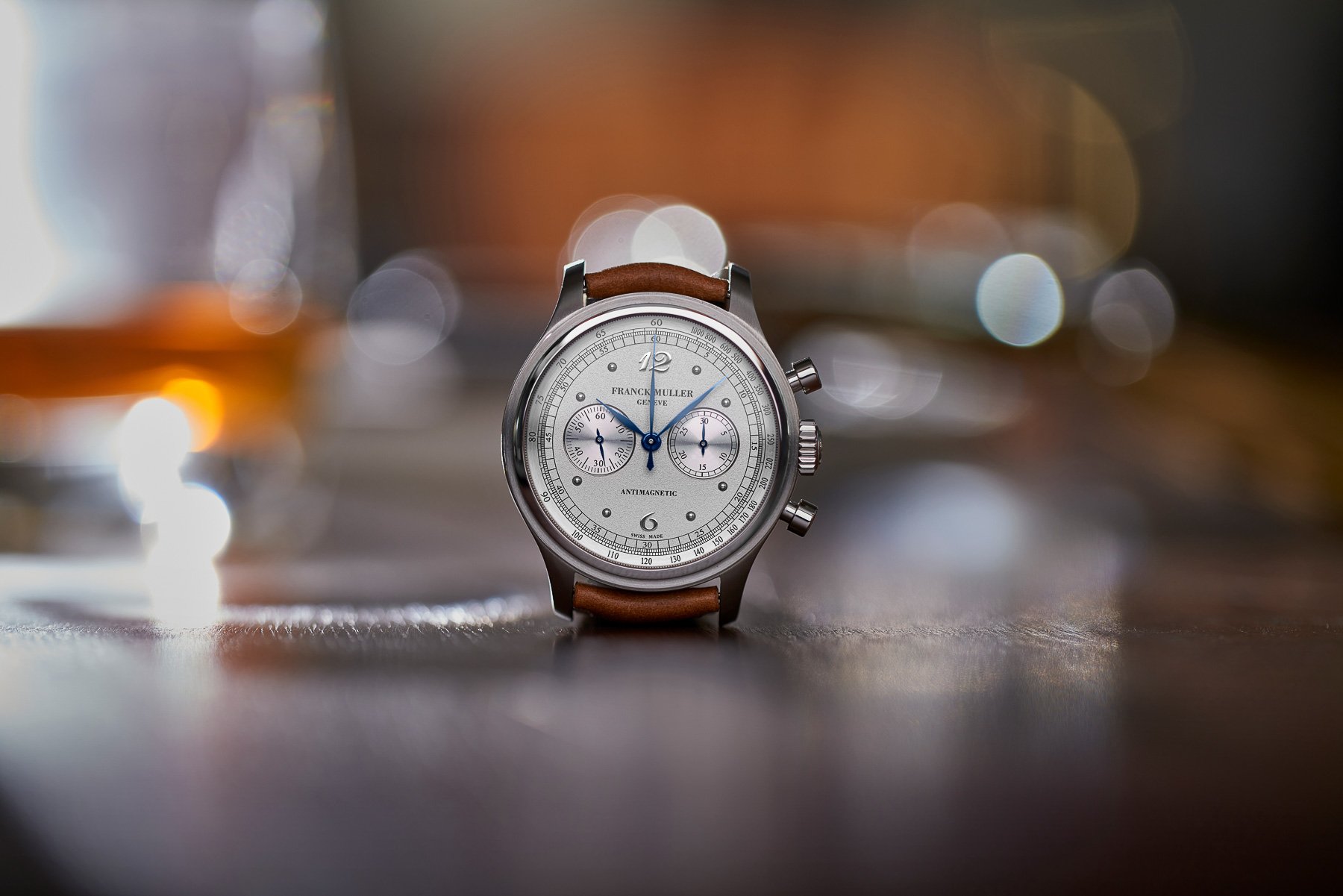 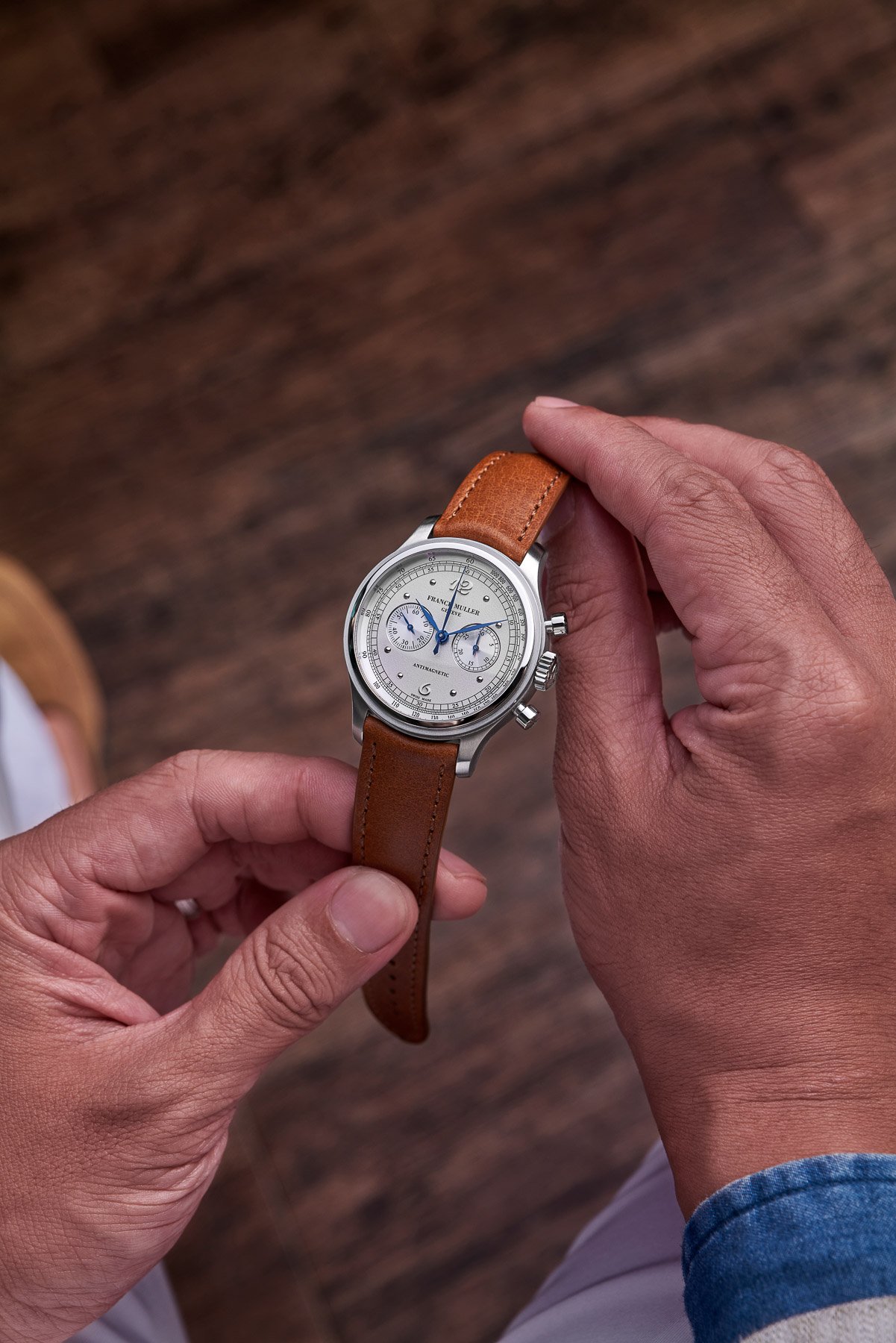 Just like the original model from the 1990s, the dial indicates that it is “Antimagnetic”. To stay even truer to the original, you can opt for a closed case back upon ordering this watch. It does, however, come with a sapphire case back by default. This watch is limited to 50 pieces and has a retail price of US$19,500. 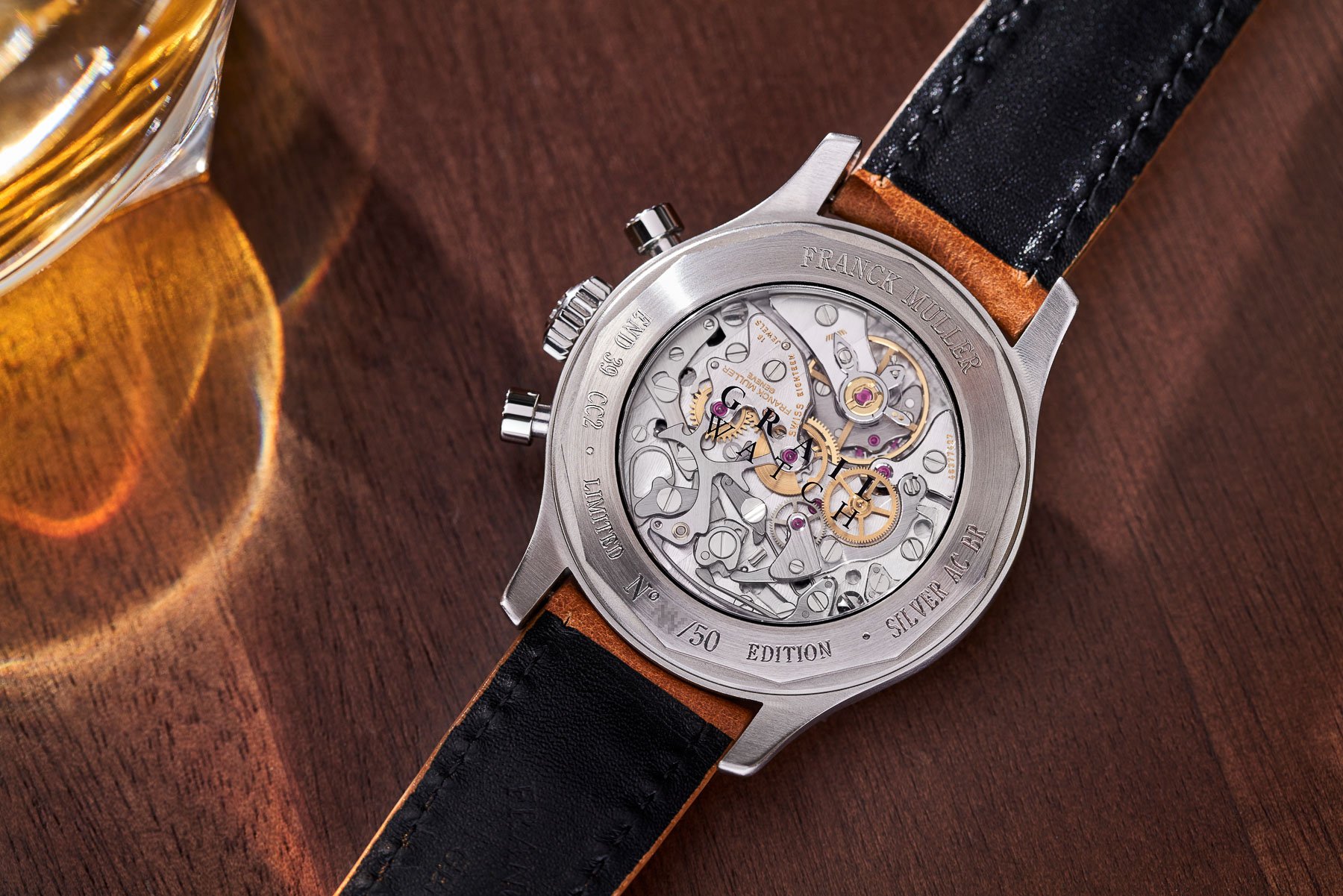 Inside is the Lemania 1874-based FM 2759 movement, ticking at 21,600vph with a power reserve of 40 hours. The movement has been nicely decorated with Côtes de Genève and polished bevels. 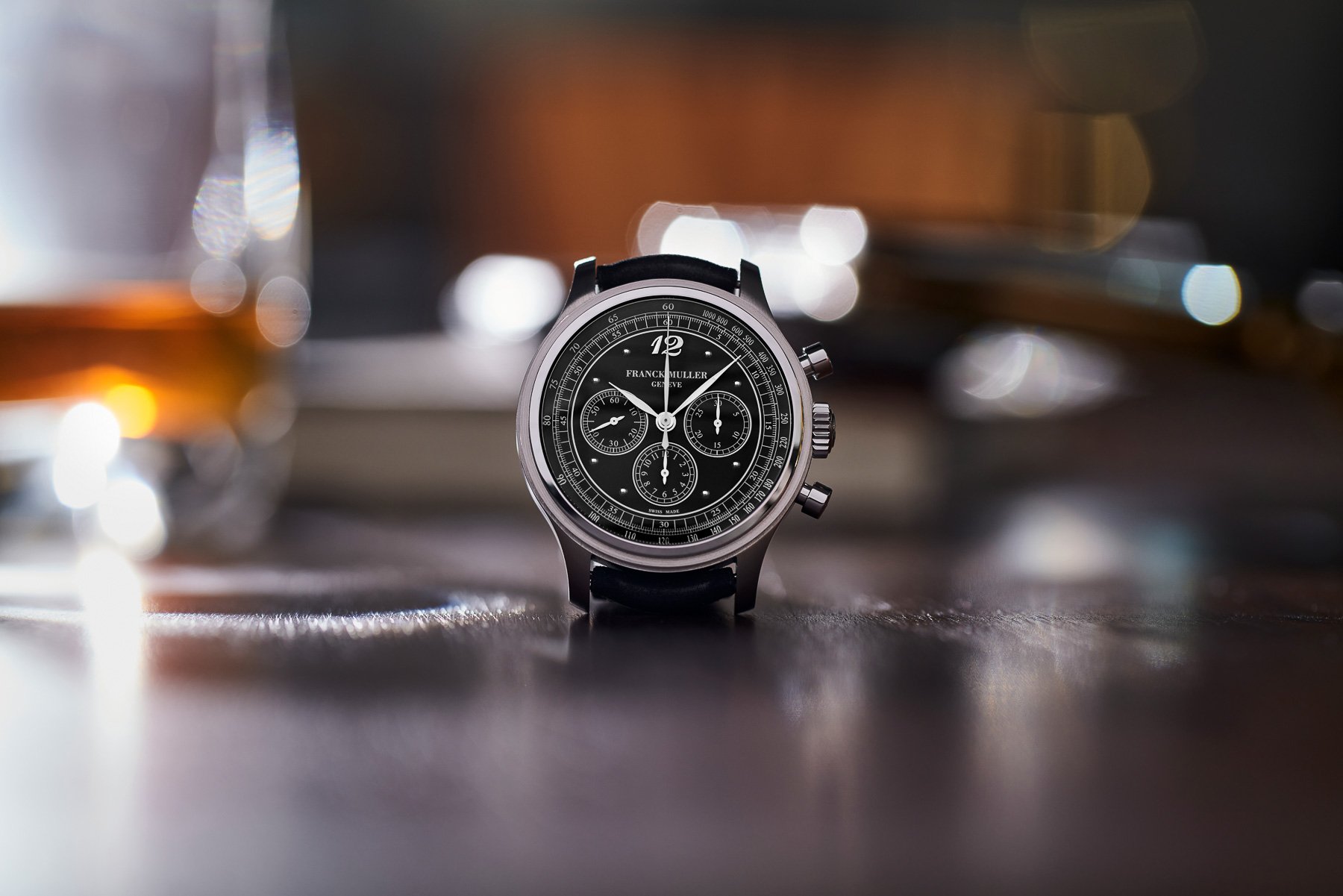 The second watch from the trio is the Frank Muller Tri-Compax Chronograph. This is the black-dial model with — as the name suggests — a triple-register layout. This watch is also based on the Lemania 1874 movement, now dubbed FM 2758 (three sub-dials), but with the same level of finishing and the same specifications. 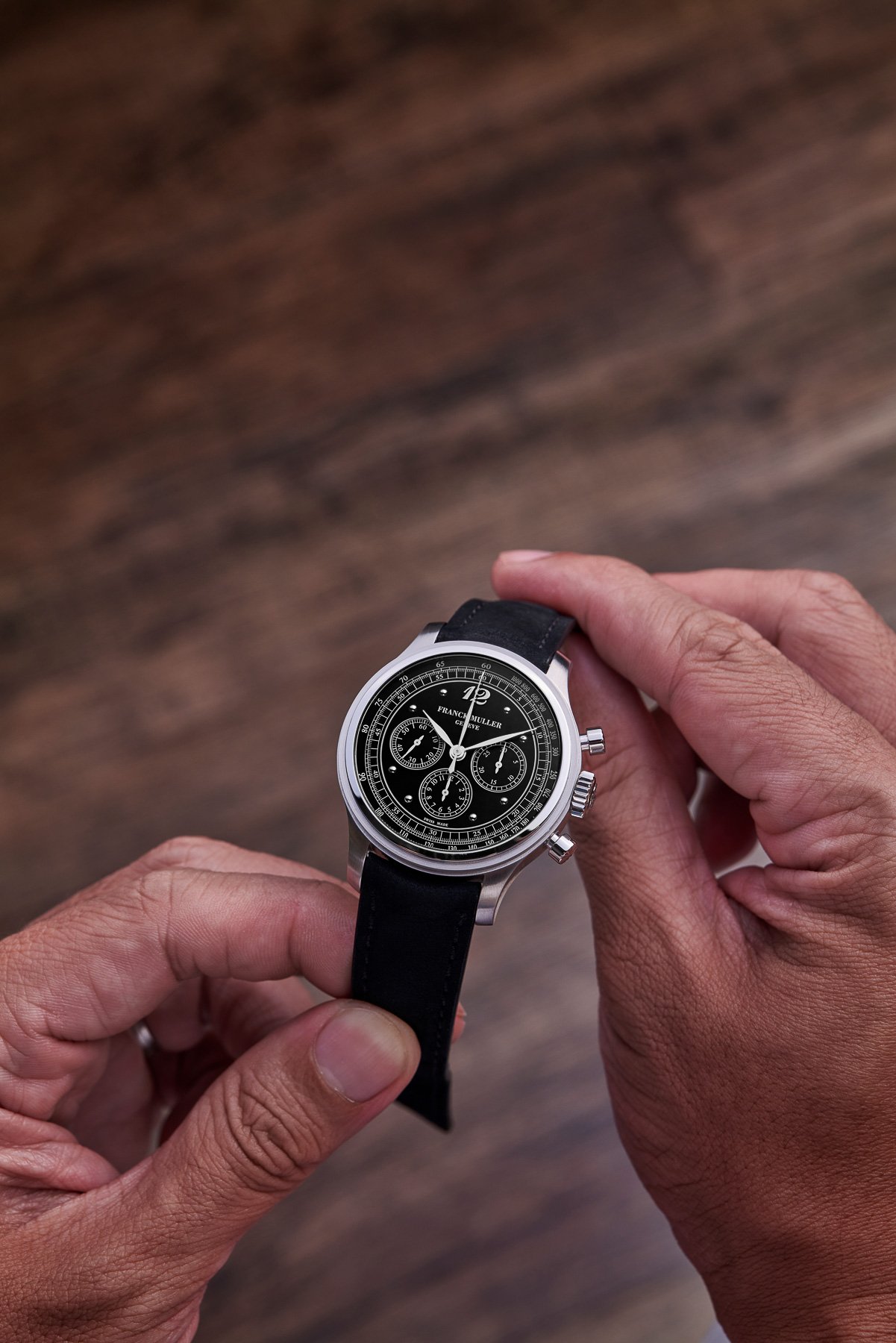 It’s the dial where you will find the differences with the Bi-Compax model. At 6 o’clock, there’s a 12-hour counter instead of a Breguet numeral. It also has a black grené dial with one applied Breguet numeral as 12 o’clock. The hour markers are applied high-polished dots. Both cases have a thickness of 10.95mm. 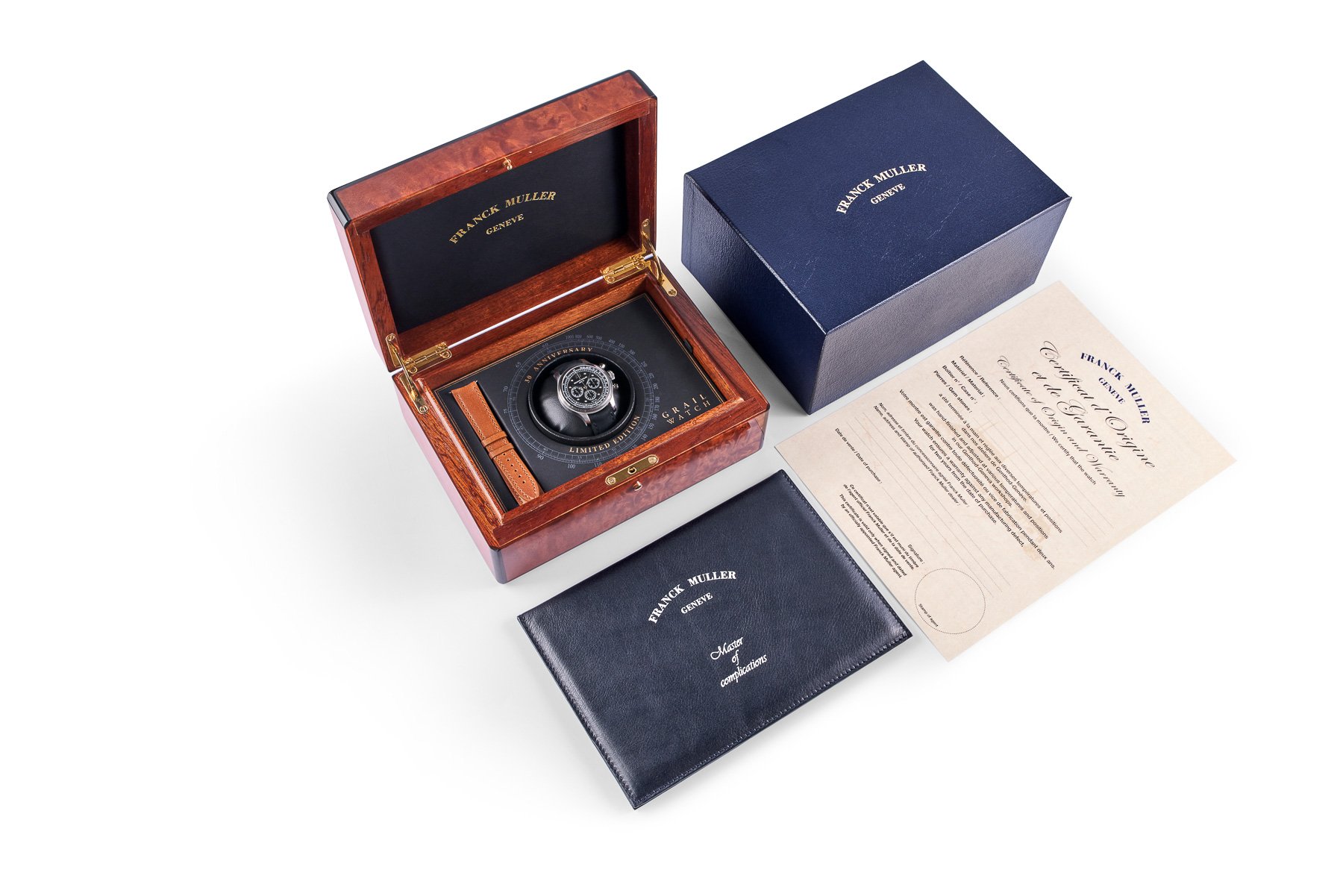 The Tri-Compax Chronograph is limited to 50 pieces only. It carries a retail price of US$20,500. 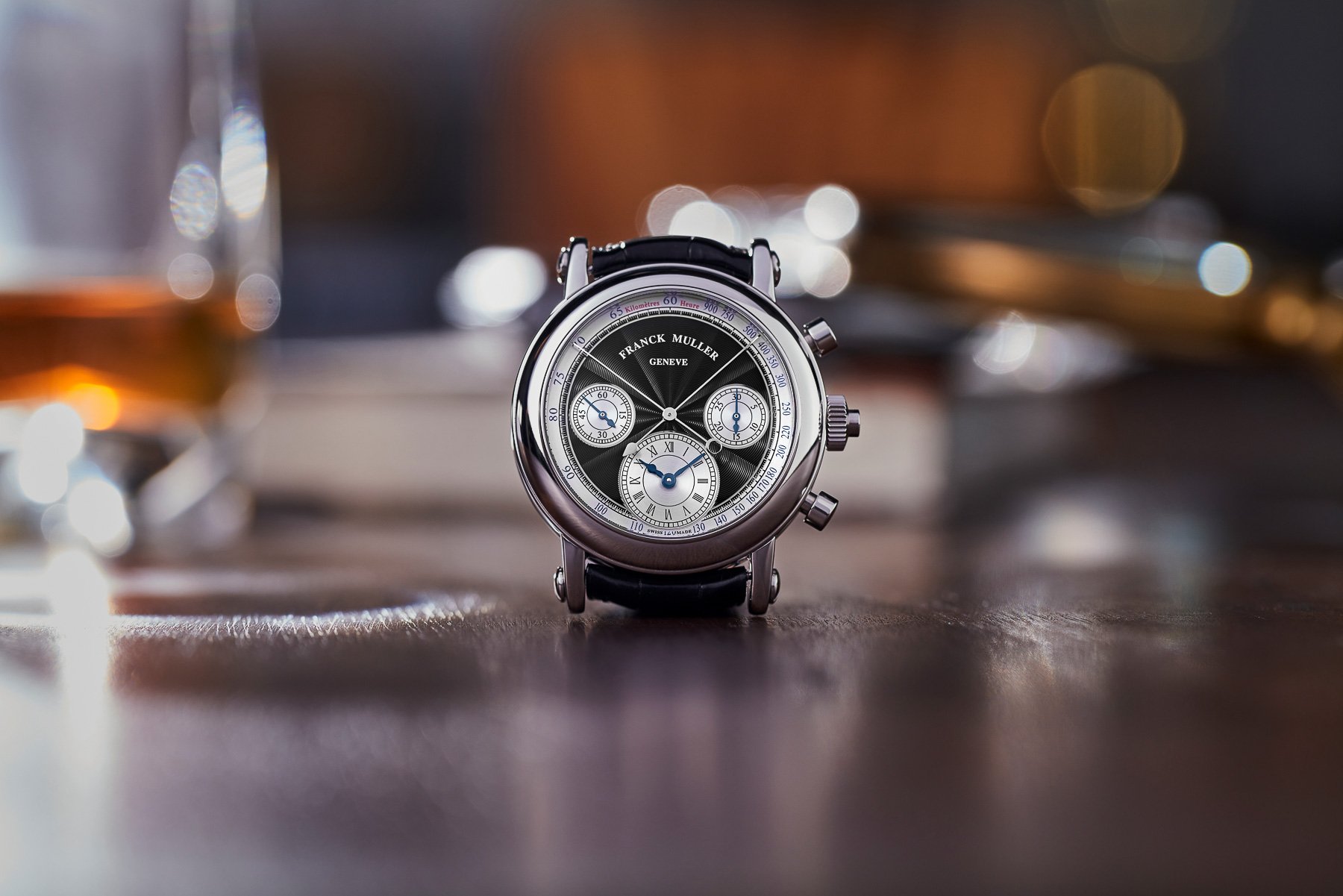 Last but not least, there’s the third Grail Watch 2 piece. This is the Franck Muller Double Sided Rattrapante Chronograph, which houses the FM-7000-CCRCDF movement. Its case also measures 39mm in diameter but 13.45mm in thickness due to the additional complications. 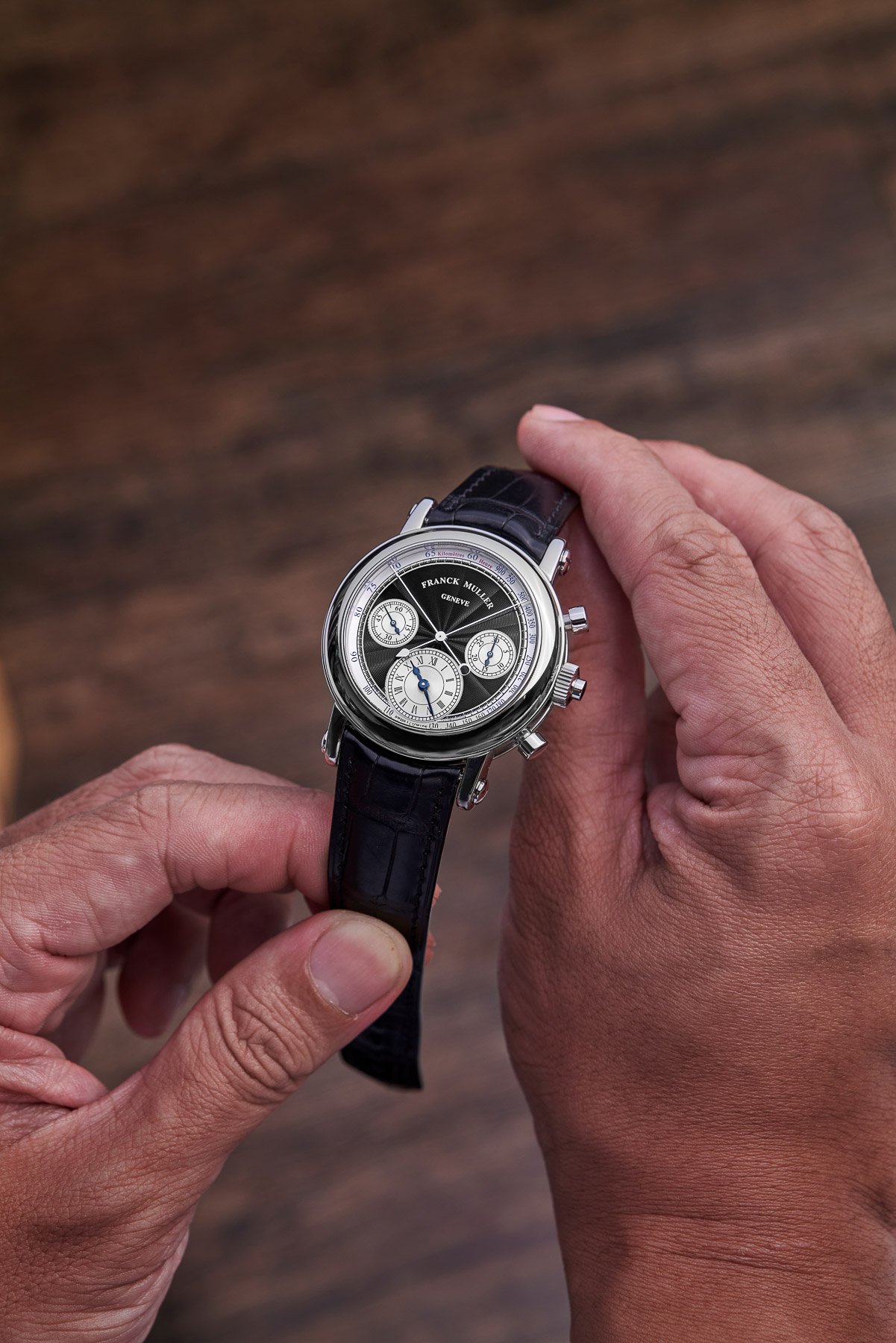 Just like the original, it has dials on both sides of the watch. The front shows the time and chronograph with a tachymeter scale on the periphery of the dial. The back side shows a chronograph-seconds hand, a telemeter, a pulsometer, and a snail-type tachymeter scale in the center. The central chronograph hands on the front side are made of polished steel, while the smaller hands for the sub-dials are blued leaf-shaped hands. The main dial is gloss black with a concentric wave pattern, and the recessed sub-dials are silver with a circular pattern and polished rim. 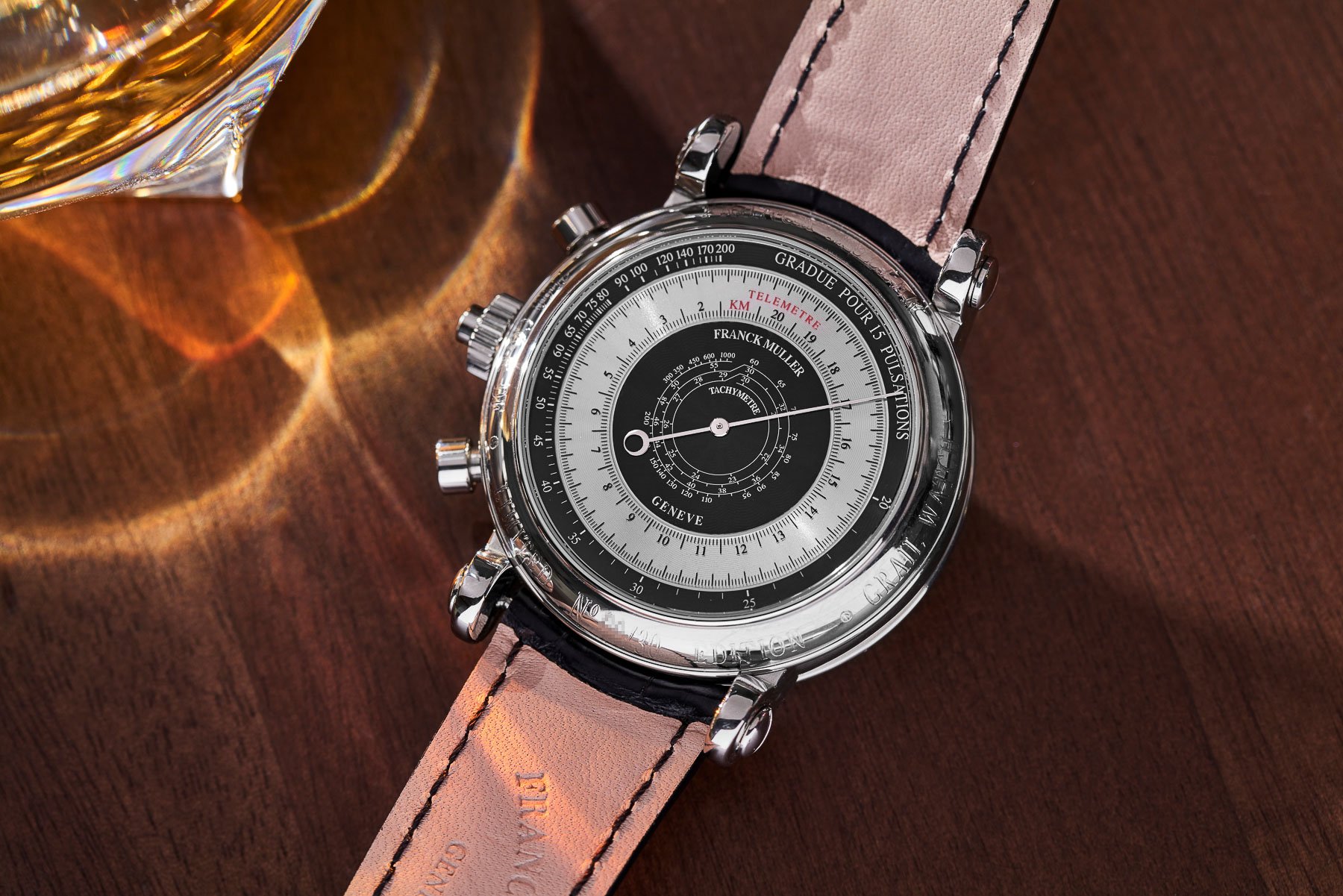 As you can see, the pusher for the split-second chronograph is integrated into the winding crown. The case shape is also different from the Bi-Compax and Tri-Compax Chronograph models, featuring straight lugs and screwed bar caps. The retail price of this Double Sided Rattrapante Chronograph is US$25,500, and the watch is limited to 30 pieces only. 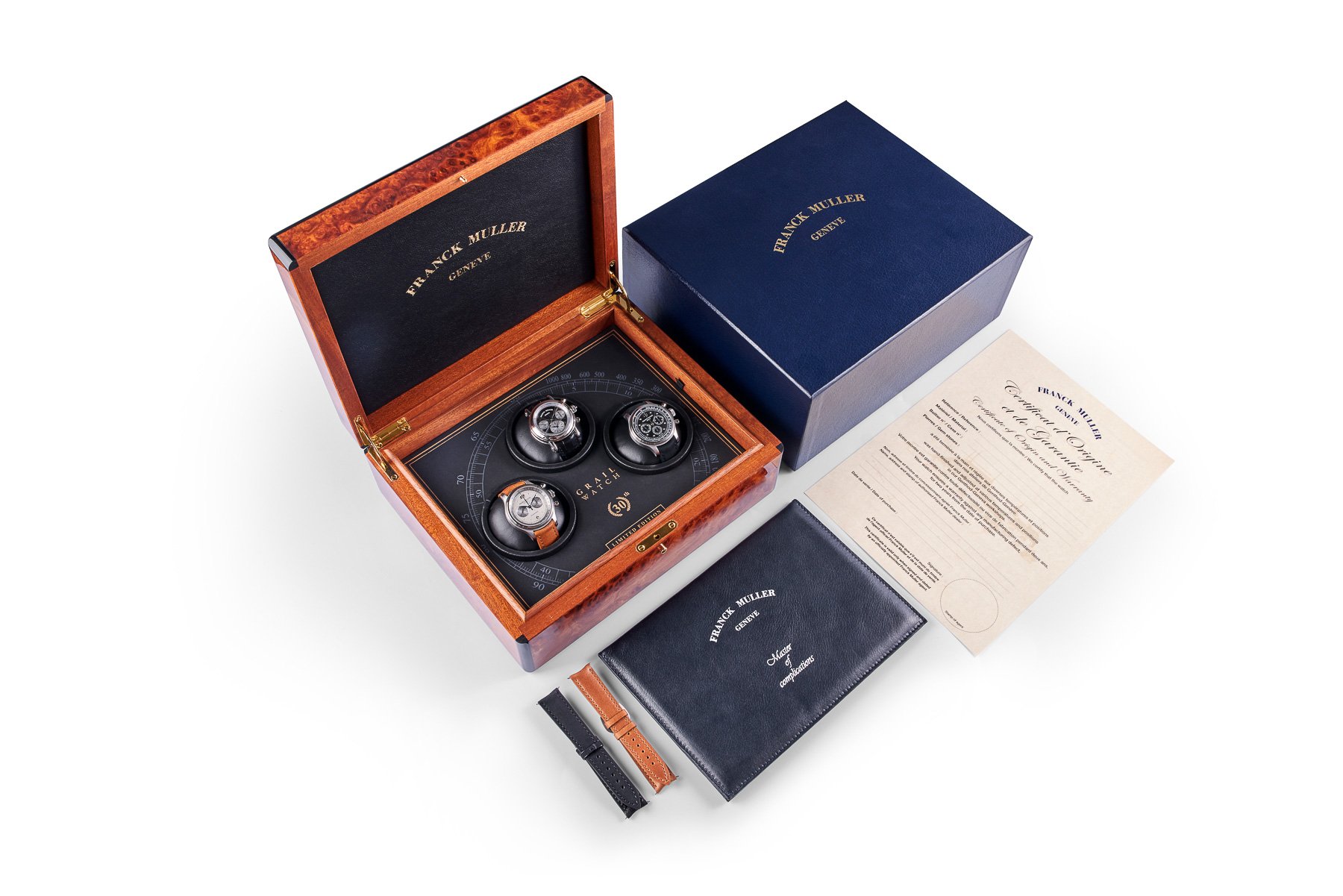 As a set of three

Grail Watch is offering 10 sets with all three watches included. The examples in these 10 sets will be the first numbered (1–10) pieces from the total number of limited editions per watch. The remaining watches (numbered 11–30 or 11–50) will be sold separately. The set price is US$64,500.

Franck Muller and Grail Watch did an amazing job reviving these 36mm and 37mm chronographs in 39mm cases with the same movements and design aesthetics. Congratulations to all parties involved. I have no doubt that these watches (including the 10 sets) will find their way to collectors of such beautiful chronographs.