Last week Mühle-Glashütte invited us over to the north of Germany to celebrate their 20-year partnership with the German Maritime Search and Rescue Society (DGzRS). And what do you do as a watch brand to celebrate such an anniversary? That’s right, you launch a new watch! But not before we went on a trip with two rescue vessels of the DGzRS. After that the Mühle family presented us with the all-new S.A.R. Mission-Timer TITAN. A modernized titanium version of their iconic search and rescue toolwatch.

But before we go to the watch, let me tell you a little bit about the Mühle family history. The company was founded in 1869 by Robert Mühle. At that time they manufactured measuring instruments for the watchmaking companies and schools in Glashütte. During the 20th century the family business first expanded its production towards speedometers for cars and motorcycles. After having gone through a few transitions the company was re-established in 1994 by Hans-Jürgen Mühle. From then on the company focused solely on marine chronometers and marine time systems. 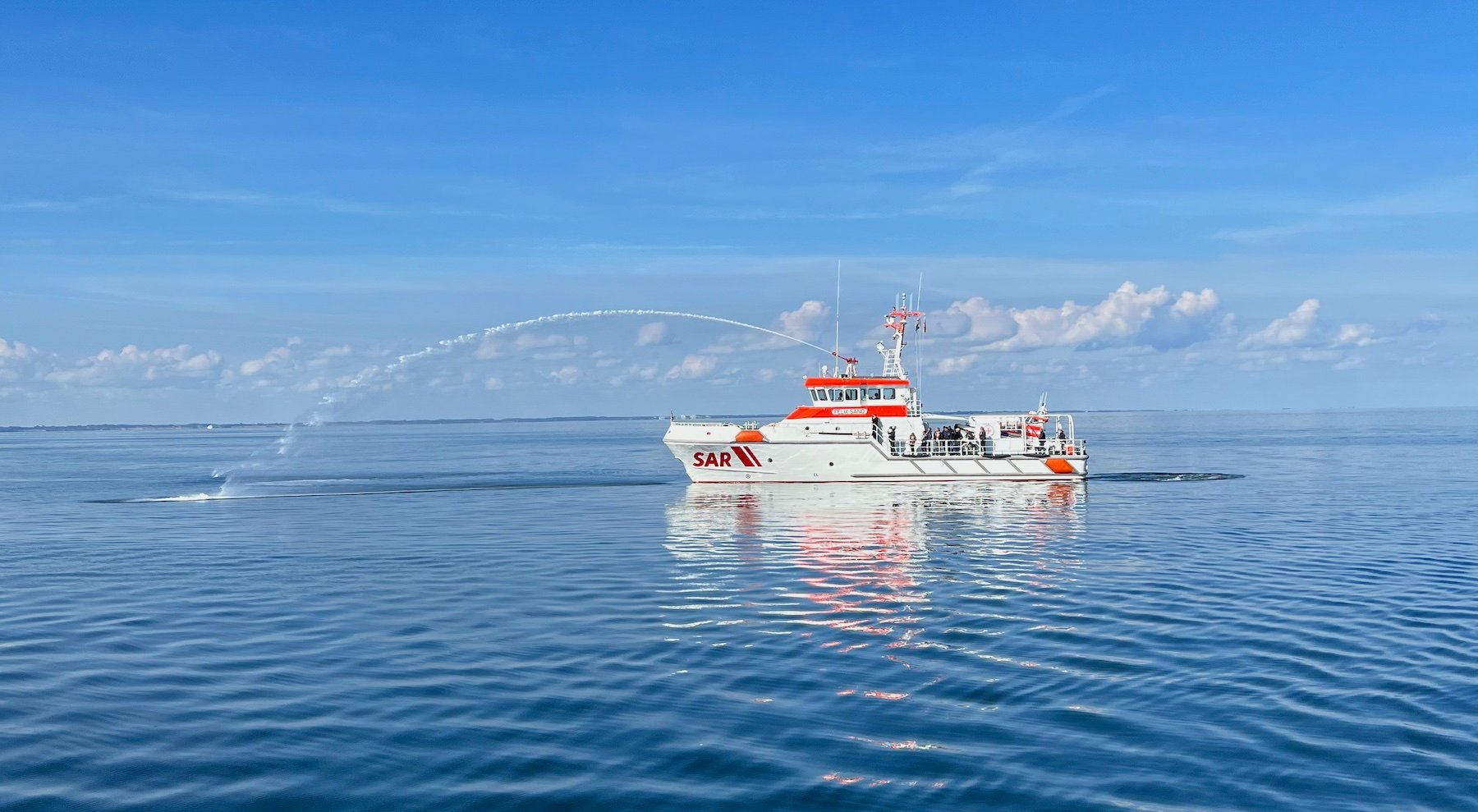 Collaboration with the German Maritime Search and Rescue Society

In 1995 the family was asked by the shipyards if they could also produce robust and trustworthy wrist watches.  They took on the challenge, succeeded, and now have a very complete collection of watches on offer. In addition the watchmakers at Mühle also developed several in-house movements. And when they do use Sellita movements they try to improve them as much as they can. For example, with their patented woodpecker neck regulator. Which makes it easier to precisely regulate the watches and at the same time makes them more shock resistant. 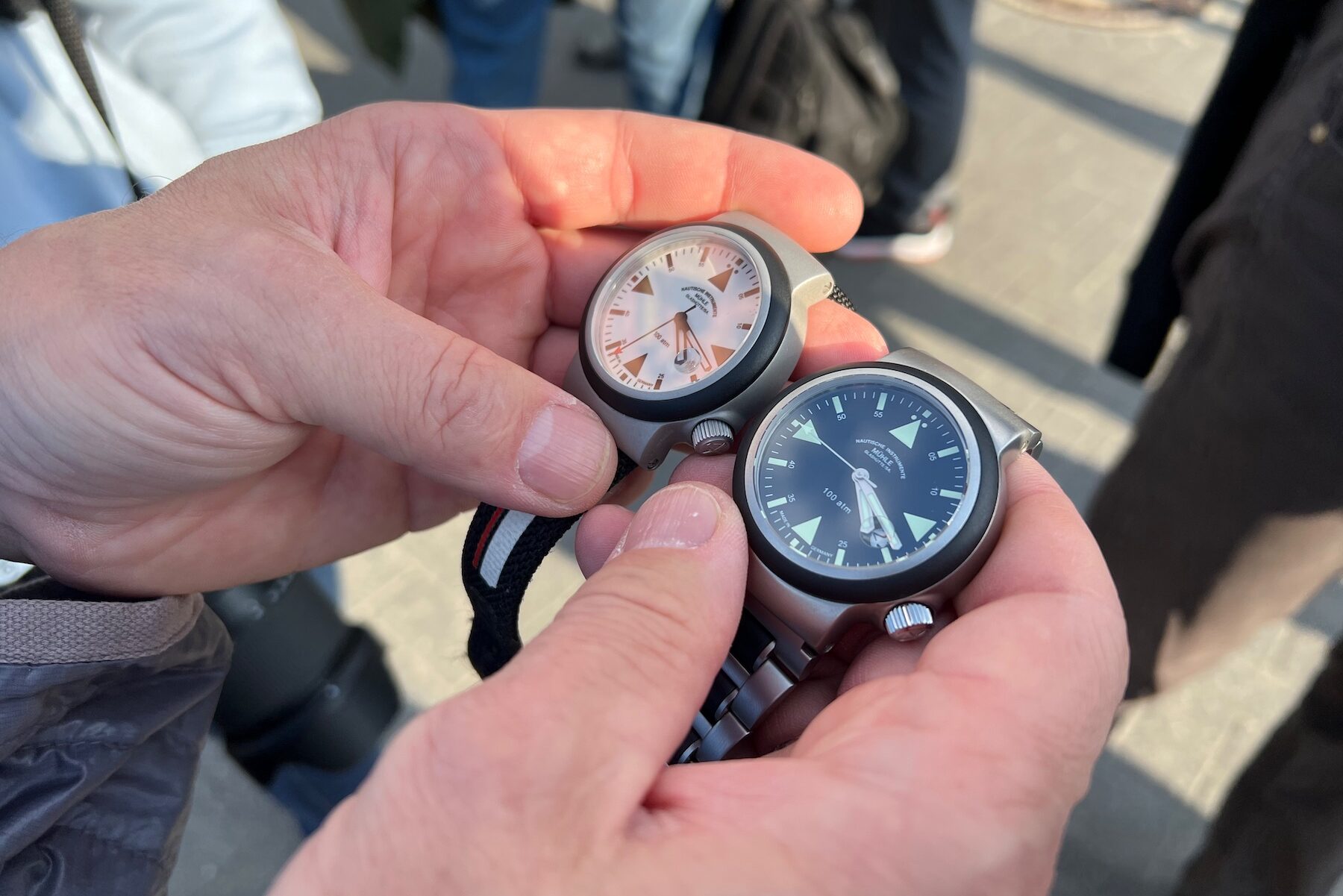 A full-lume and a regular version of the S.A.R. Rescue-Timer

In 2002 the company, still lead by Hans-Jürgen, started a close collaboration with the DGzRS. They developed a robust timepiece with a GMT function, because they thought that would come in handy at sea. But that wasn’t actually what the rescuers needed. They needed a watch made for extreme conditions. Showing just the time and the date on a very legible dial. In a case that, with a 4mm thick sapphire crystal, would be able to deal with high pressure and sudden impacts. That watch is the S.A.R. Rescue-Timer, the one that’s still in the company’s collection today. 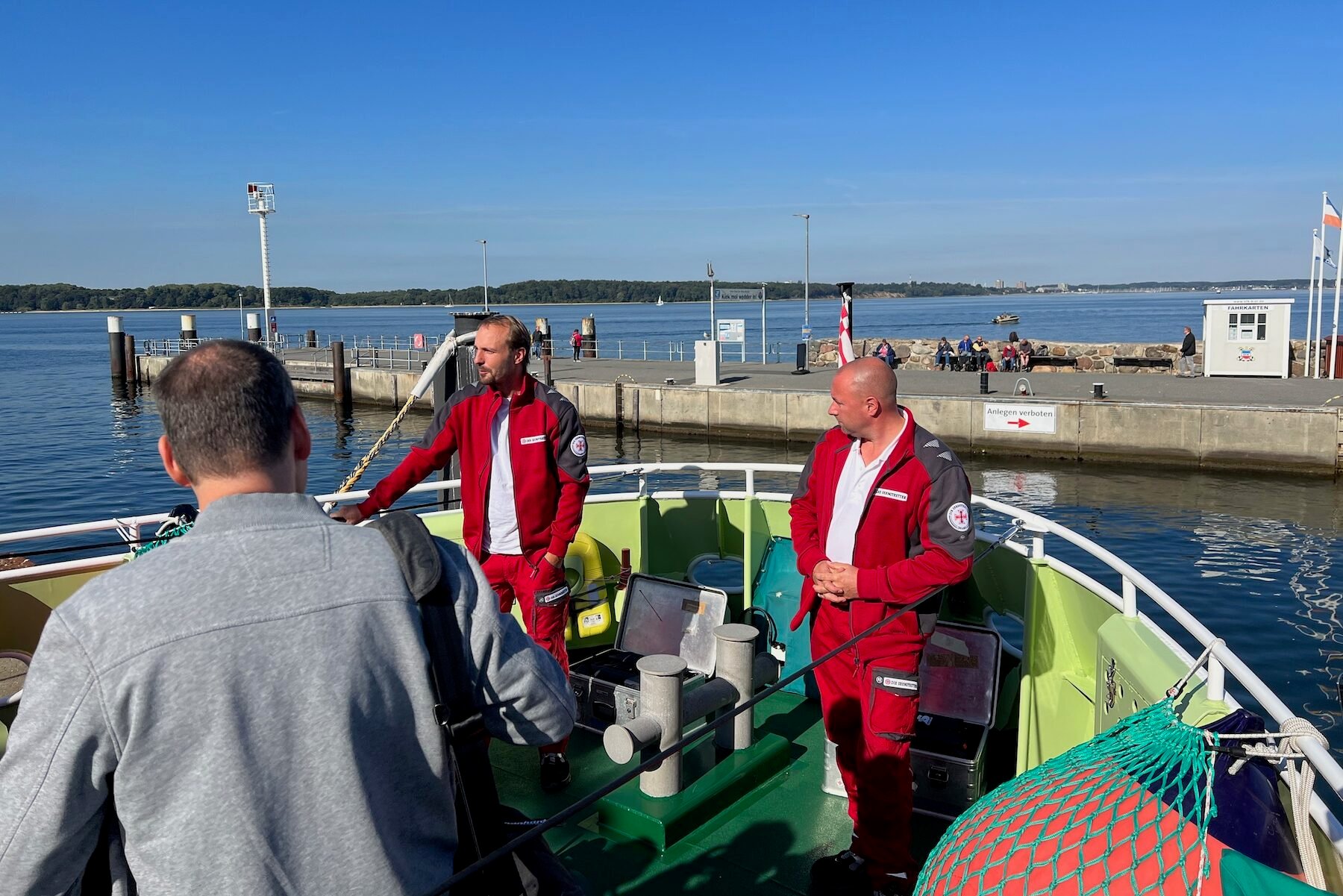 But that’s not all. Hans-Jürgen’s son, Thilo, who’s now in charge of the business,  also plays an active role in the DGzRS’ decision-making body. Over the years the company has also released many limited editions of the watch and a part of the proceeds have been donated to the DGzRS. So after 20 years of collaboration it was time for a celebration! 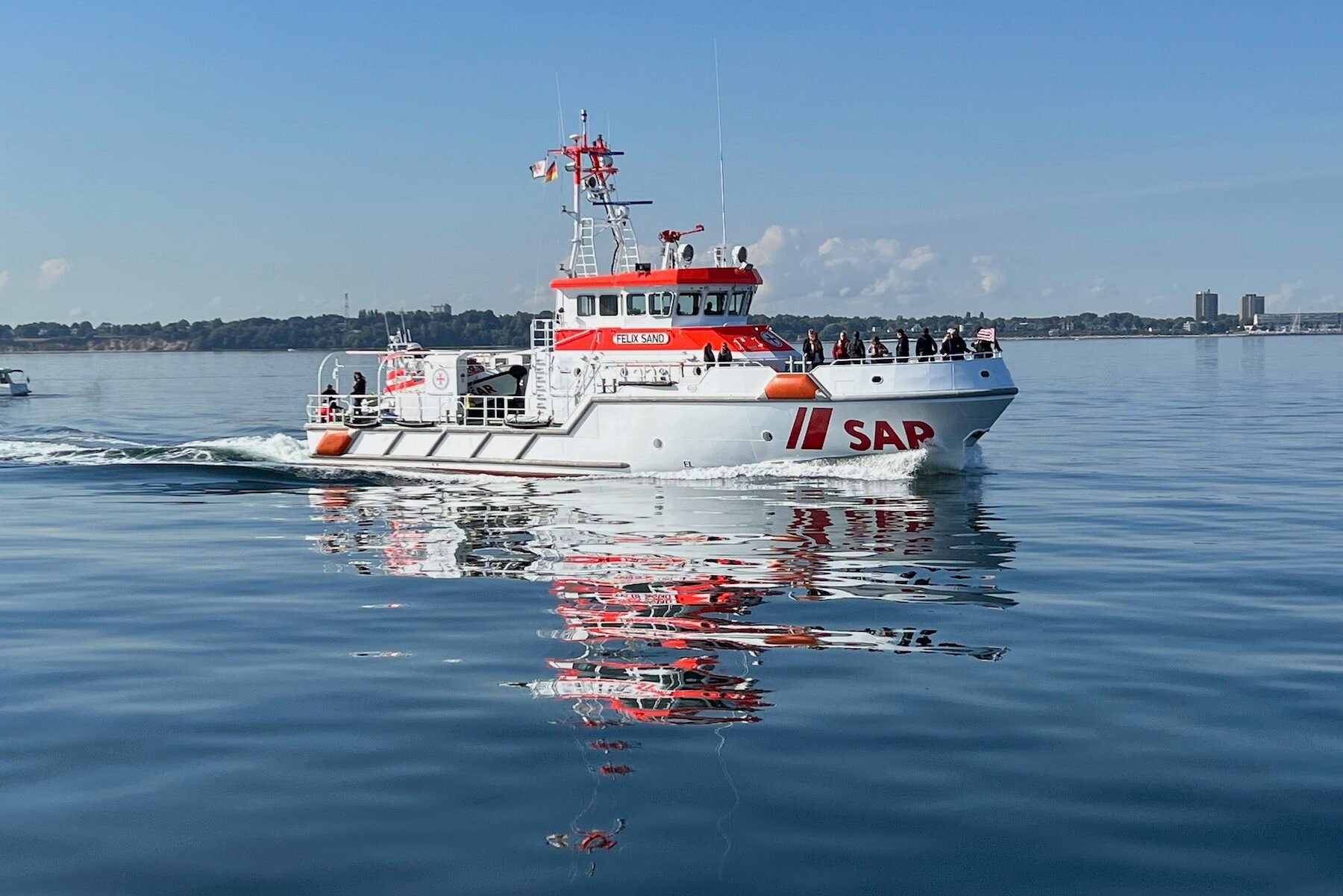 A (sunny) day in the life of a DGzRS officer

In the invitation for the event it was mentioned to bring weather-proof clothing, just in case. But when we arrived at the port, the morning sun was already shining and the water was as calm as it could be. They divided our group over two identical search and rescue vessels. We were provided with a life vest and off we went! First we went for a few kilometers of cruising with the wind in our hair and the sun in our eyes. Then it was time for a little demonstration. 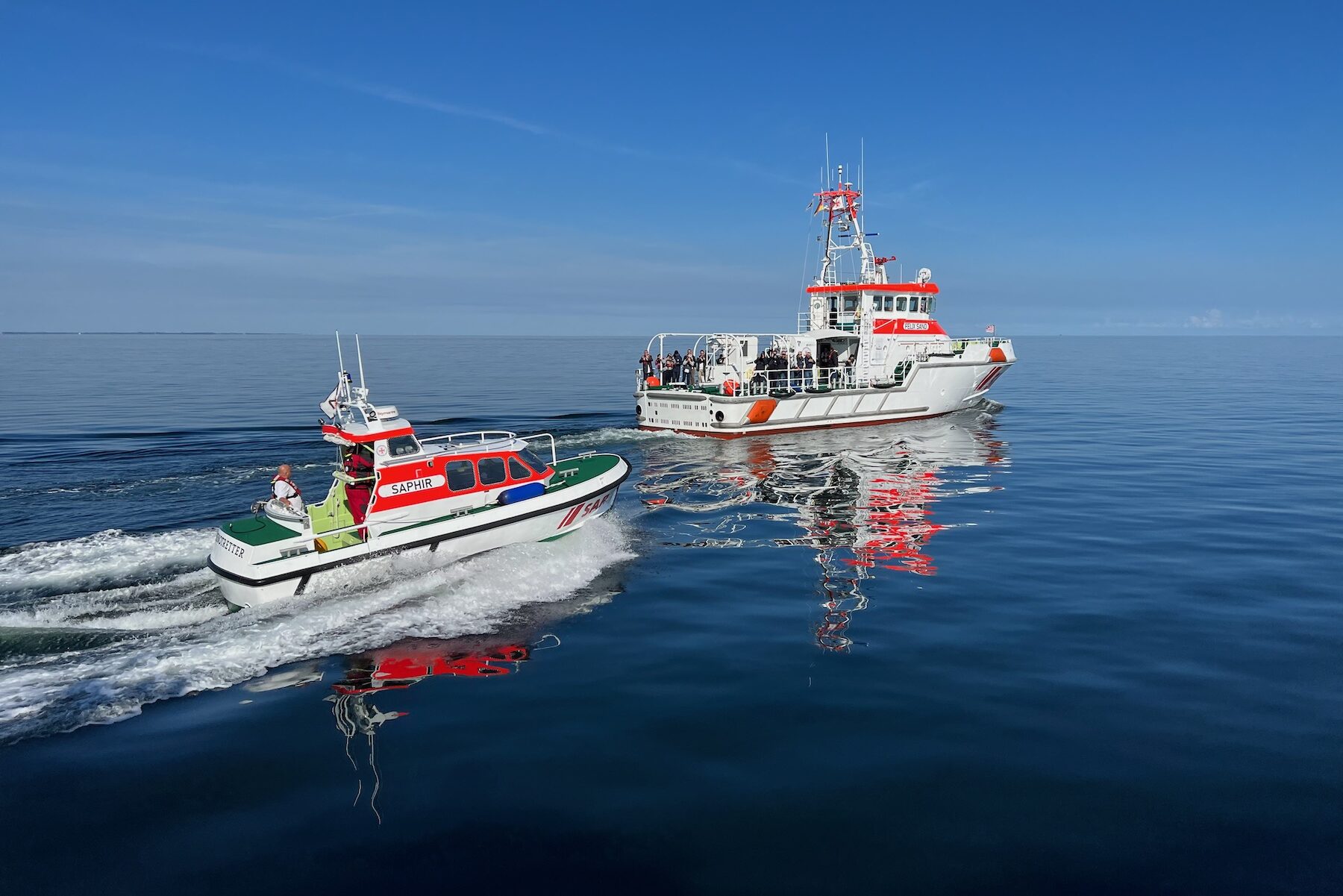 We lowered speed and were told to pay attention to the back of the other vessel. Both vessels carried a smaller rescue boat on board. Two of the officers took their places in the cabin and they unloaded the smaller rescue boat into the sea. It was like looking at the birth of a cute little baby boat. They raced it around both the bigger vessels for a while. Until it was time to load it back up onto the mothership. It was an impressive sight.

While the vessel was moving at minimum speed, the smaller rescue boat played catch up. It only had to enter with its tip until it latched on and was towed up the rest of the way. Today it was an easy exercize, but imagine doing this with strong winds and high waves. While saving a family from a rented sailing boat or the crew of a stranded oil tanker. Nothing but respect for these officers. 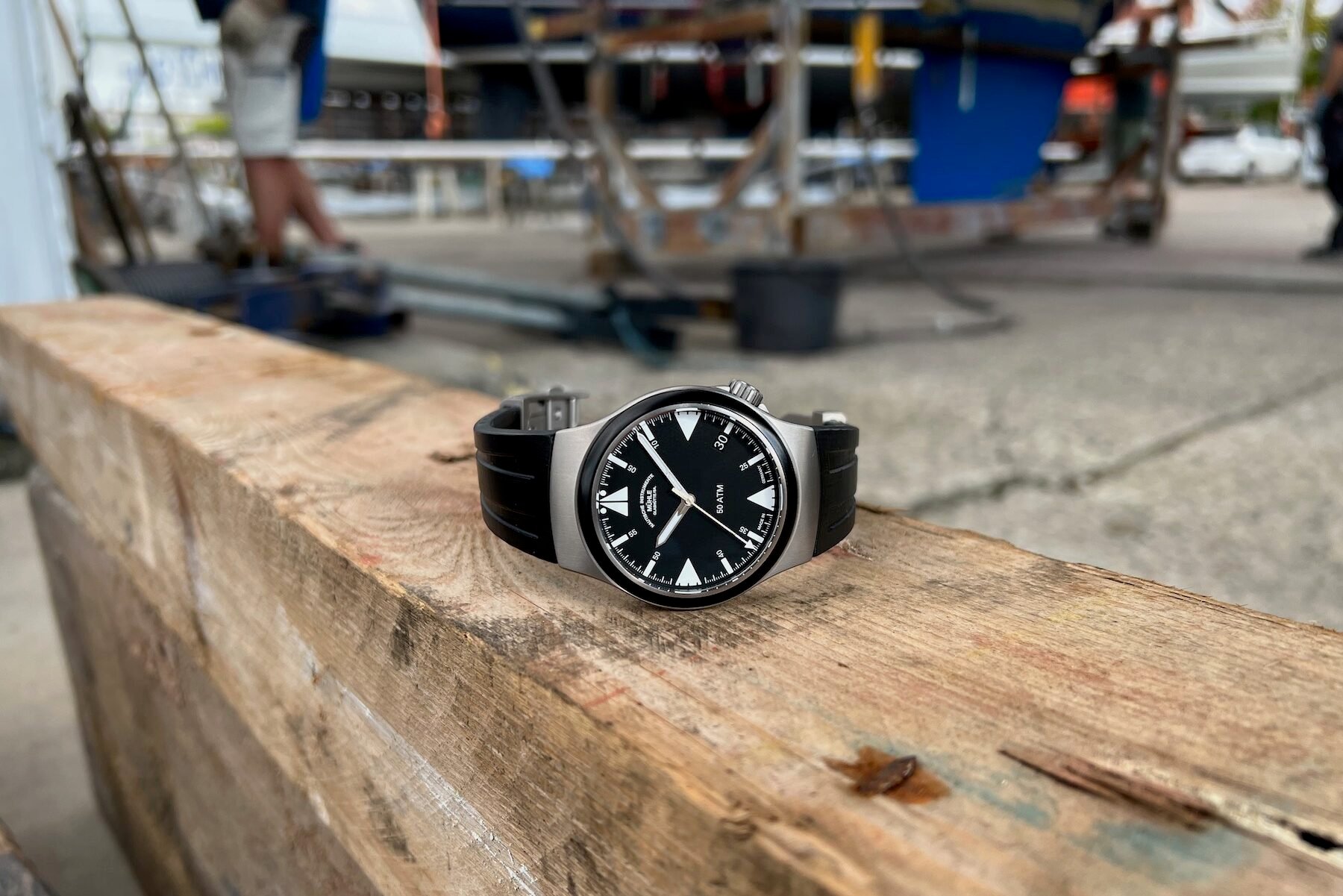 When we arrived back into the port it was time for the presentation of the Family’s new watch. Hans-Jürgen, the old master, took a seat in the room. While his son Thilo and grand-children Dustin and Fanny were preparing the presentation. During the introduction Thilo said that the development on this new watch started around two years ago. It took quite some time to get it right, because introducing a new version of your brand’s iconic watch can either make or brake you. But after multiple family discussions and feedback sessions with the DGzRS officers they were ready to make it a reality. 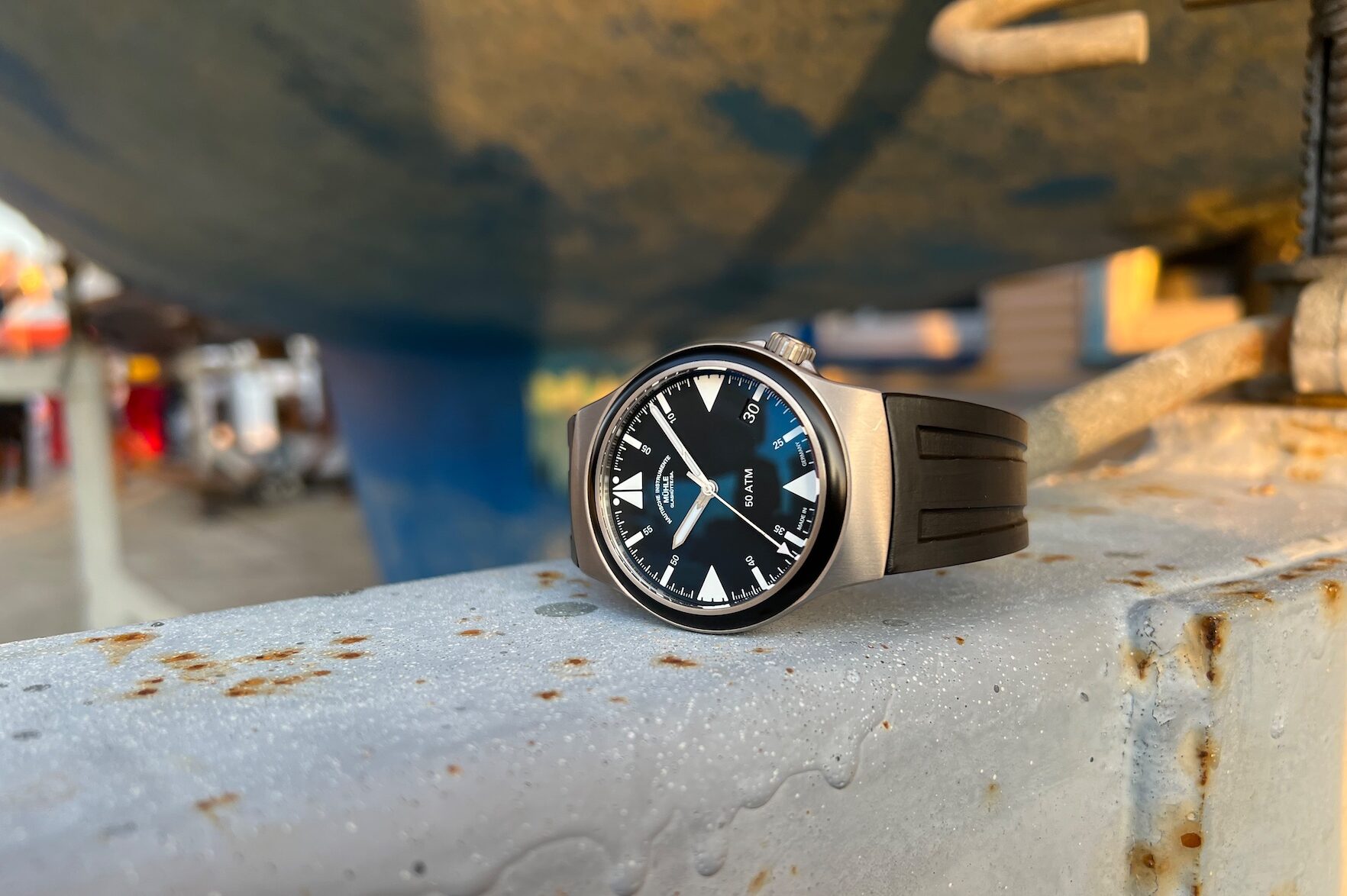 The new watch is called the S.A.R. Mission-Timer TITAN. And you guessed it, its 43mm case is entirely made out of titanium. Fanny described the watch as being the company’s e-bike or electric car. What she meant was that it’s a modernized and more streamlined version of their iconic Rescue-Timer. It’s still very recognizable, but has been updated with today’s technology. 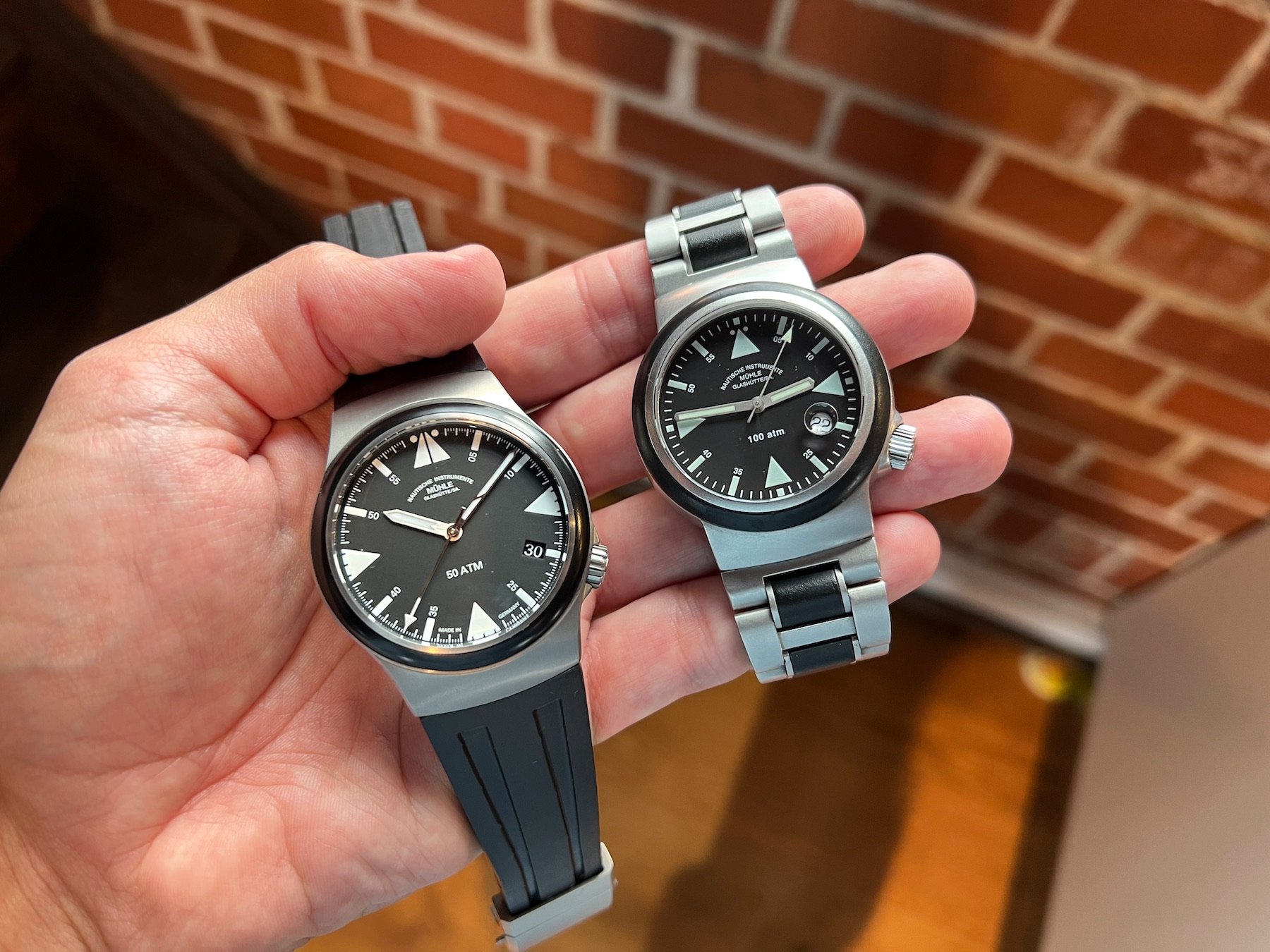 Ceramic instead of rubber

The familiar and distinctive dial design has remained almost unchanged. Although Thilo was very proud of how the minute track continued into the big triangles at each quarter. Because it had been a challenge to apply the Super LumiNova in that particular way. Another change is the bigger date at four o’clock. The Mühle family preferred this over the use of a magnifier in the sapphire crystal. They achieved it by replacing the Sellita SW200-1 by a Sellita SW400-1. Of course executed with their own woodpecker neck regulation, rotor and characteristic surface finishes. 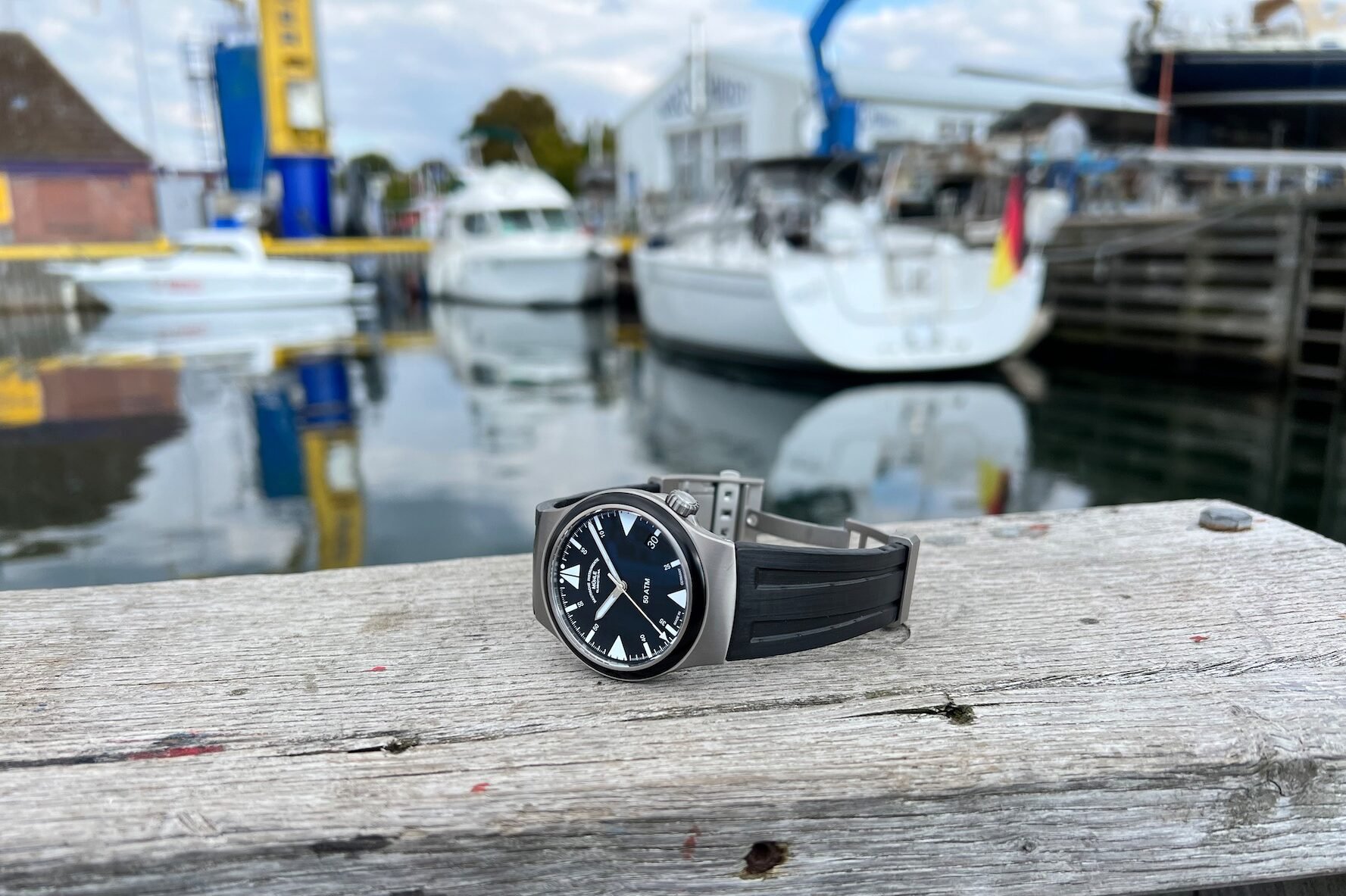 In comparison to the S.A.R. Rescue-Timer the new watch is one millimeter wider and half a millimeter thinner. Overall, it looks like a streamlined version of the original icon. And because of the thinner case and crystal the watch is also a little less water resistant at 50atm instead of 100atm. Still more than adequate! It also feautures a ceramic bezel instead of the original rubber one. The S.A.R. Mission-Timer TITAN comes on a proprietary rubber strap with a titantium clasp including a diver’s extension. Ready to be taken on any of the DGzRS officers’ missions. 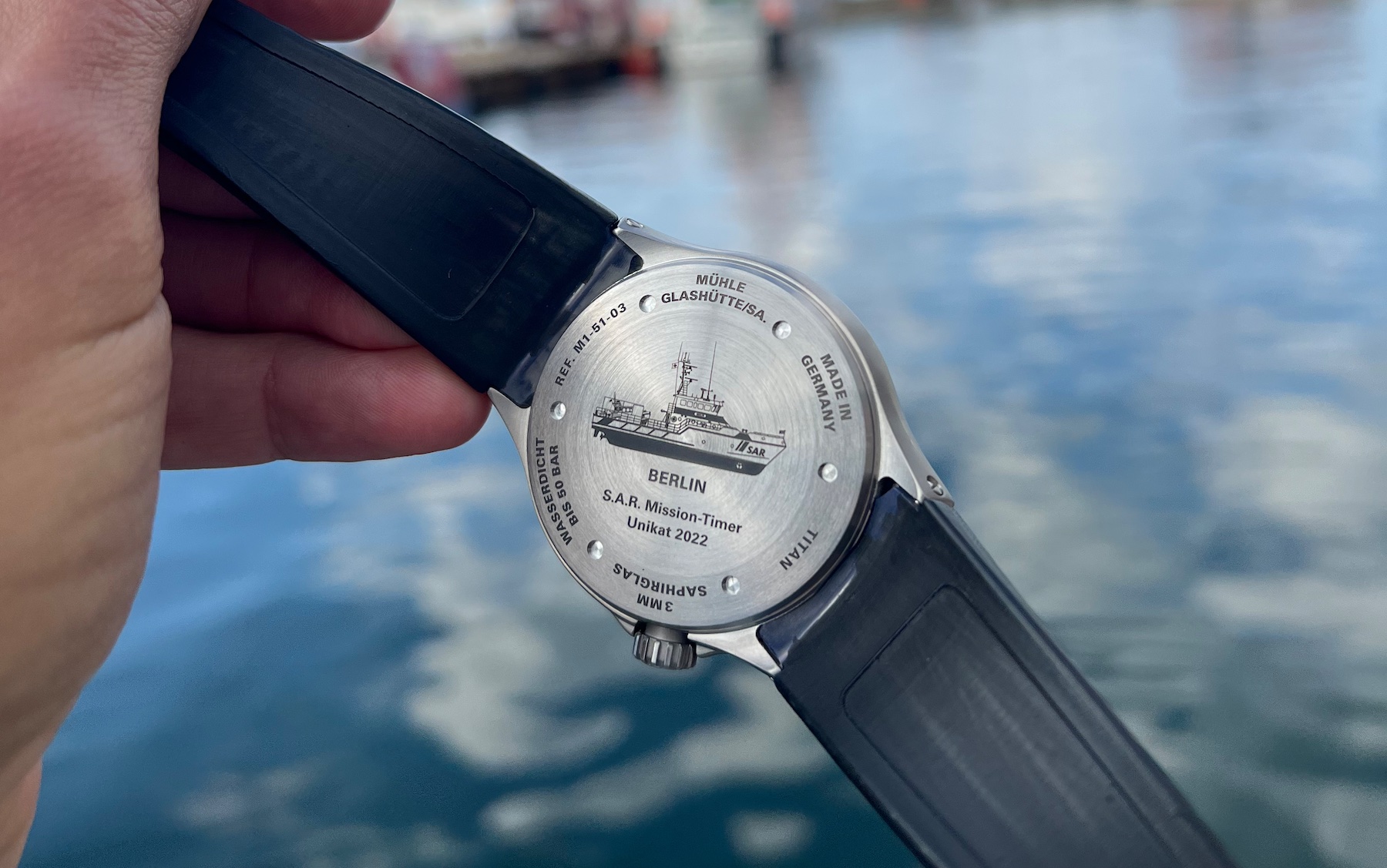 There are two versions of the S.A.R. Mission-Timer TITAN. One is the regular production model with an engraving of the coastlines along the North and Baltic Seas. The other is a limited edition with the name and silhouette of one of the 63 rescue cruisers or boats engraved on the caseback. 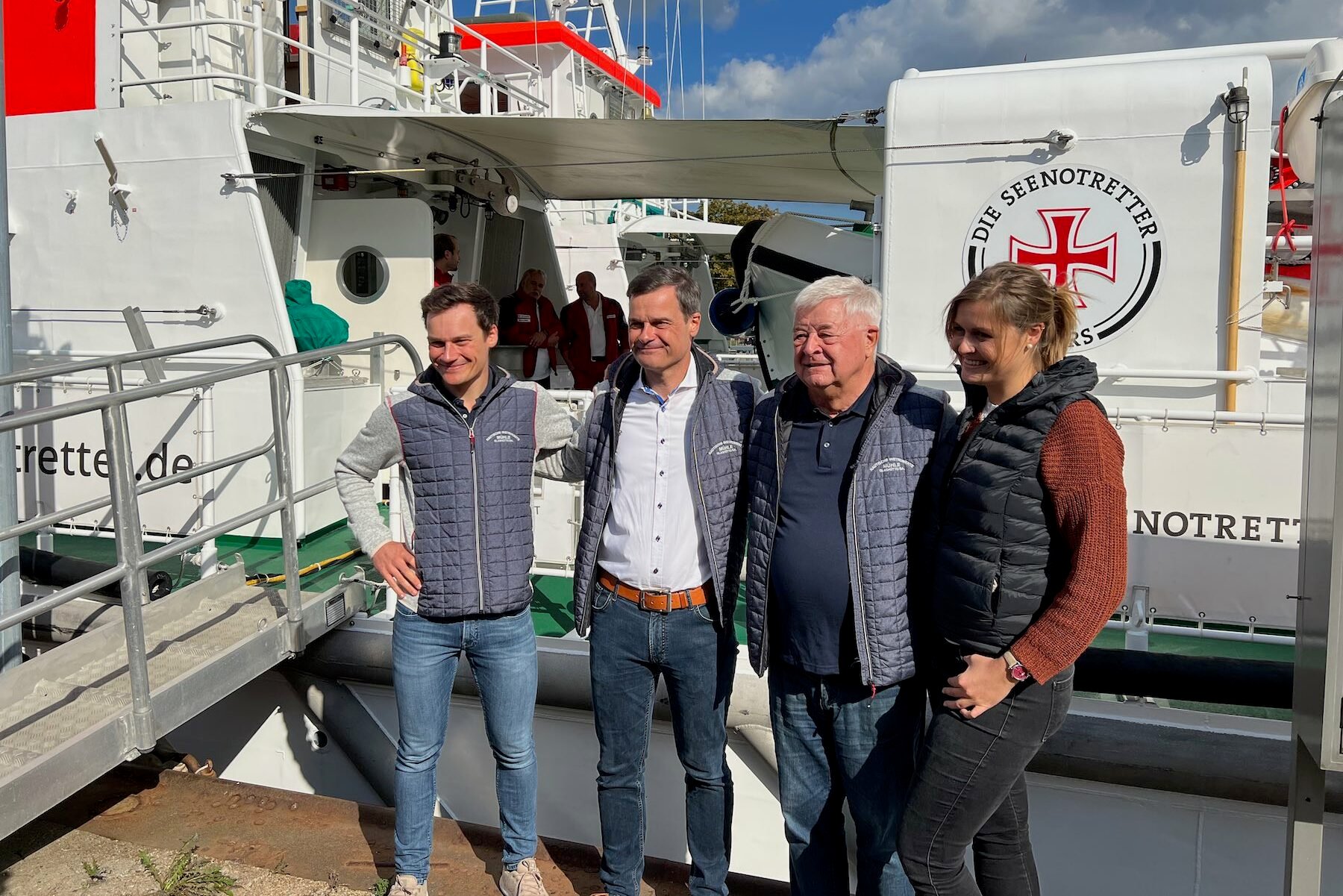 The 4th, 5th, and 6th Generation of the Mühle Family

The S.A.R. Mission-Timer TITAN will not replace the classic Rescue-Timer. Both models will exist alongside each other in the collection. I think that’s a good choice, because even though the new titanium watch has its advantages, for example its weight. The stainless-steel Rescue-Timer is still a very attractive watch on the wrist. With charming details like its magnified date and that grippy rubber bezel. Having both watches available at the same time will keep the whole Mühle family and its fans happy I think.

The Mühle-Glashütte S.A.R. Mission-Timer TITAN is available now. The regular production version can be yours for €2.900. The limited edition is available for €3.900. Please check the company’s website for more information.

Let me know in the comments what you think of the new S.A.R. Mission-Timer TITAN.

N.B. The header image was kindly provided to us by Lukasz Doskocz.