Introducing: The Citizen Promaster “Symbol Of The Seas” Limited Edition

When Citizen introduced its first light-powered analog quartz watch in 1976, it’s doubtful that anyone foresaw just how vital the Eco-Drive line would still be for the brand today. Last year, Citizen resurrected its 1982 Promaster quartz dive watch and equipped it with a modern Eco-Drive caliber. Now, the brand has updated it with a new livery to highlight the significance of the whale shark and man’s impact on its marine habitat.

Each year, Citizen uses the Promaster series to highlight and support critical aspects of nature on Earth. This year, the aim is to help preserve the whale shark. My five-year-old son tells me this is the largest of all the fish, but Citizen also explains how the endangered whale shark symbolizes a clean ocean. Because whale sharks eat vast quantities of plankton, their presence is proof of a healthy marine ecosystem. Conversely, low or shrinking numbers indicate the opposite. 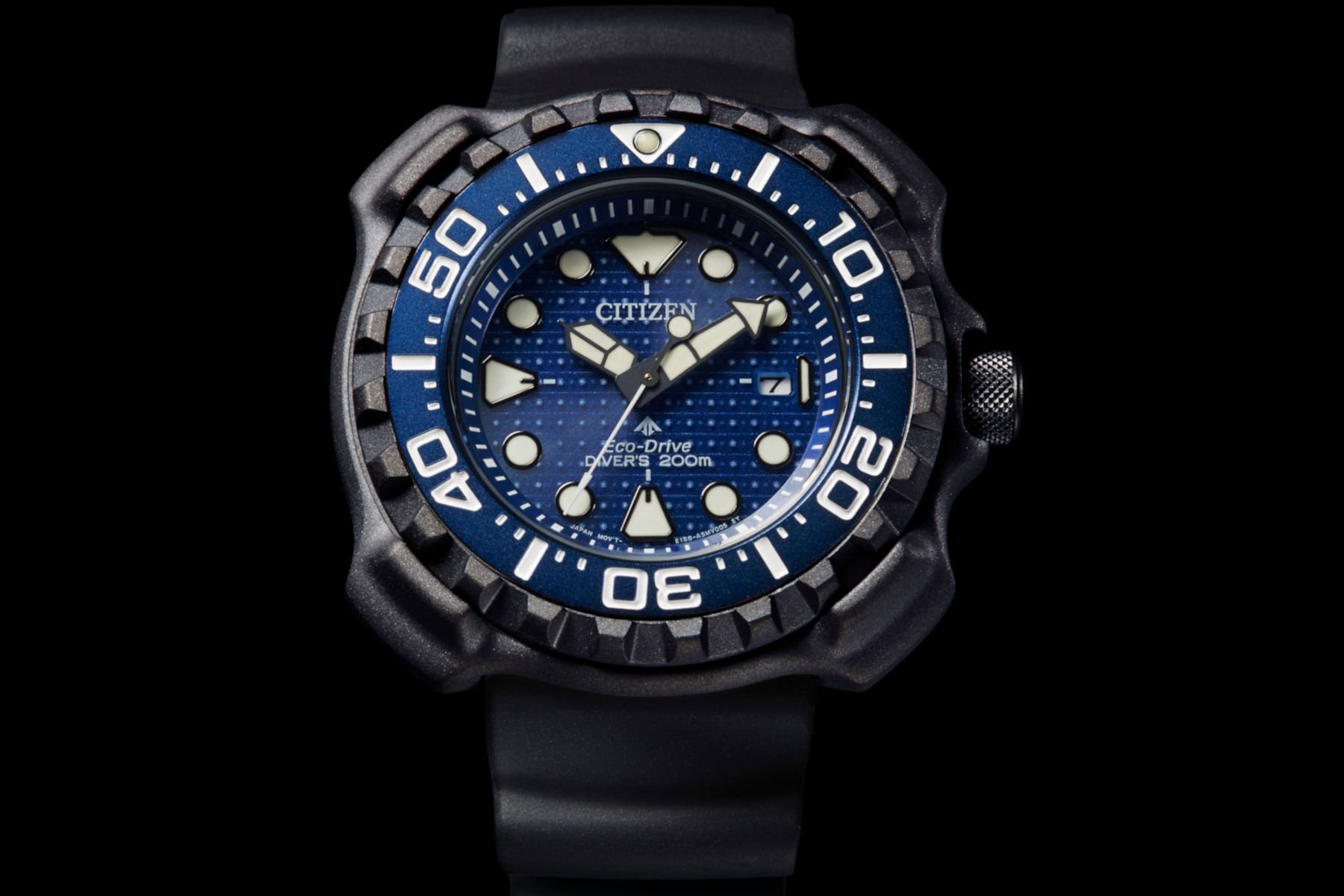 One of the main differentiating factors of this particular Citizen Promaster (ref. BN0225-04L) is the dial, decked in deep blue and featuring white spot markings mimicking those of the whale shark. It’s a pattern that feels perfectly at home on the dial of an Eco-Drive dive watch, even before you consider the inspiration.

The slightly translucent material, which allows light to pass through to the solar cell beneath, only enhances the sense of the depth of the dial. Along with the spotted pattern, large framed lume plots almost float above the blue surface. Only a partial index remains at the 3 o’clock position, where the date window consumes most of it. The deep blue hue of the dial continues through to the chapter ring and bezel insert, while the generous lume is also present on the distinctive hour and minute hands and the tail of the seconds hand. 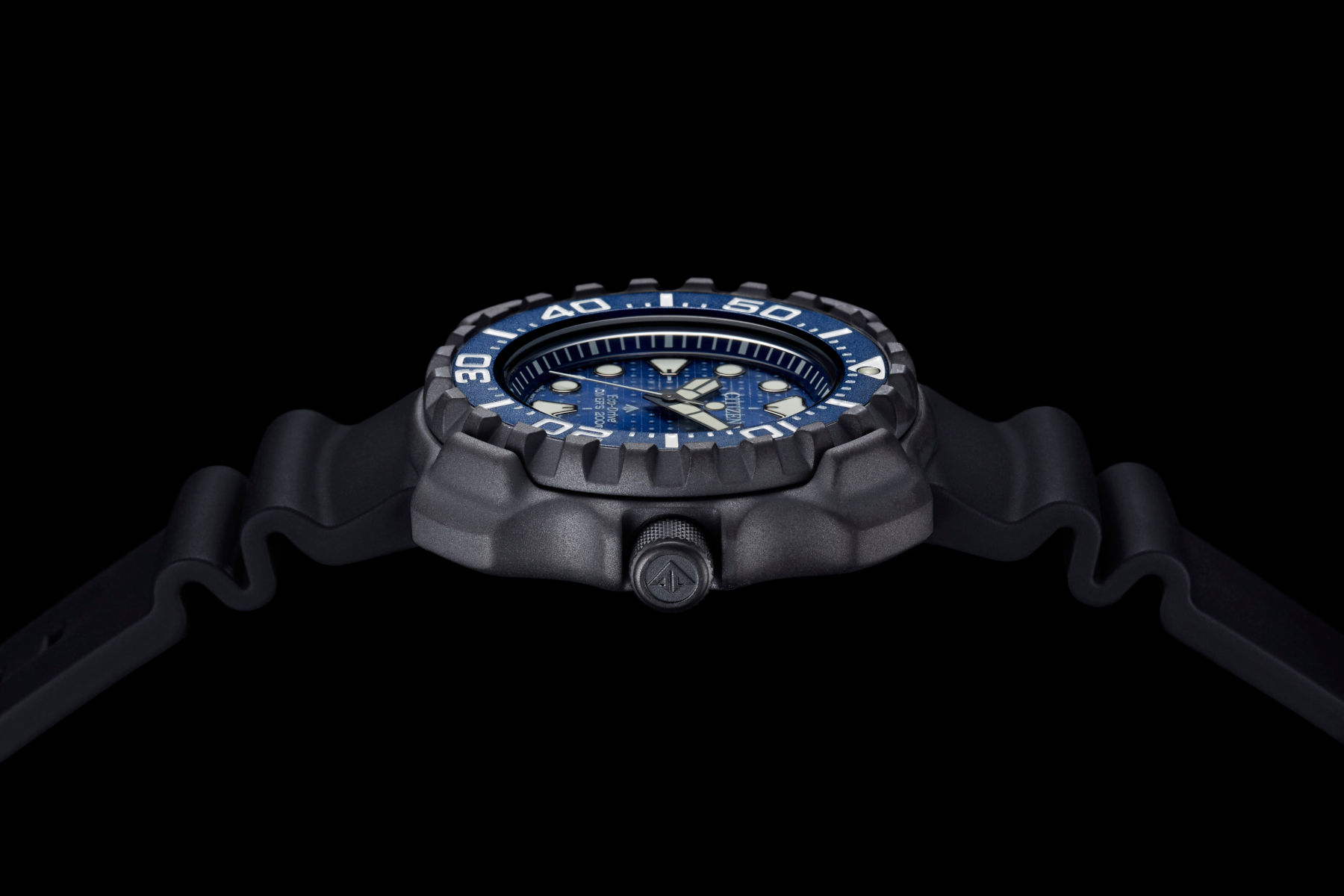 Biggest fish in the ocean

Staying true to the original from 1982, the Promaster case is large and square. It’s rather fitting that a watch highlighting the environmental issues concerning the largest fish in the ocean is also rather sizeable at 45.8mm across, excluding the crown. With a thickness of over 14.3mm, it’s a substantial piece of kit. Thankfully, Citizen opted to construct this model from Super Titanium for lightness and apply Duratect DLC coating for a scratch-resistant, all-black finish.

The DLC coating adds further meanness to the already aggressive case lines. The distension of the case into the corners isn’t purely aesthetic, though. Guards extend upwards from those four areas to protect the bezel from accidental knocks while leaving enough accessible surface area to grip and turn the 60-click unidirectional bezel. Flip the watch over, and you’ll find the other markings unique to this model. The screw-down case back features the image of a whale shark from above. 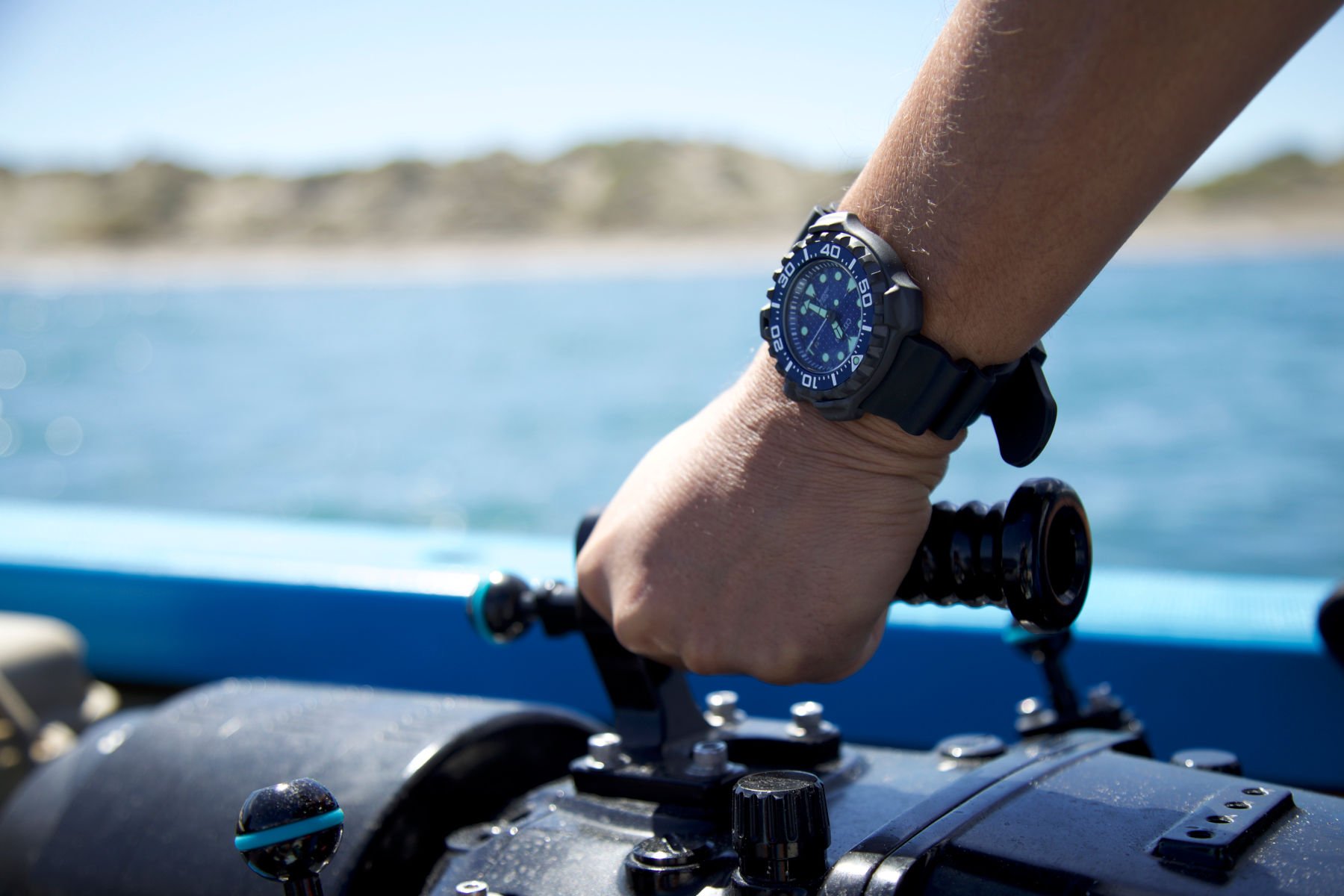 Powering the Promaster is the caliber E168, which Citizen uses in many of its Eco-Drive dive watches. This solar-charging technology means regular battery changes are no longer required, and once fully charged, the watch should run for at least six months without further access to light. Of course, regular wearing will be more than enough to keep the solar cell topped up. Citizen states accuracy of between ±15 seconds per month, though most Eco-Drive owners report much tighter figures than this in practice. 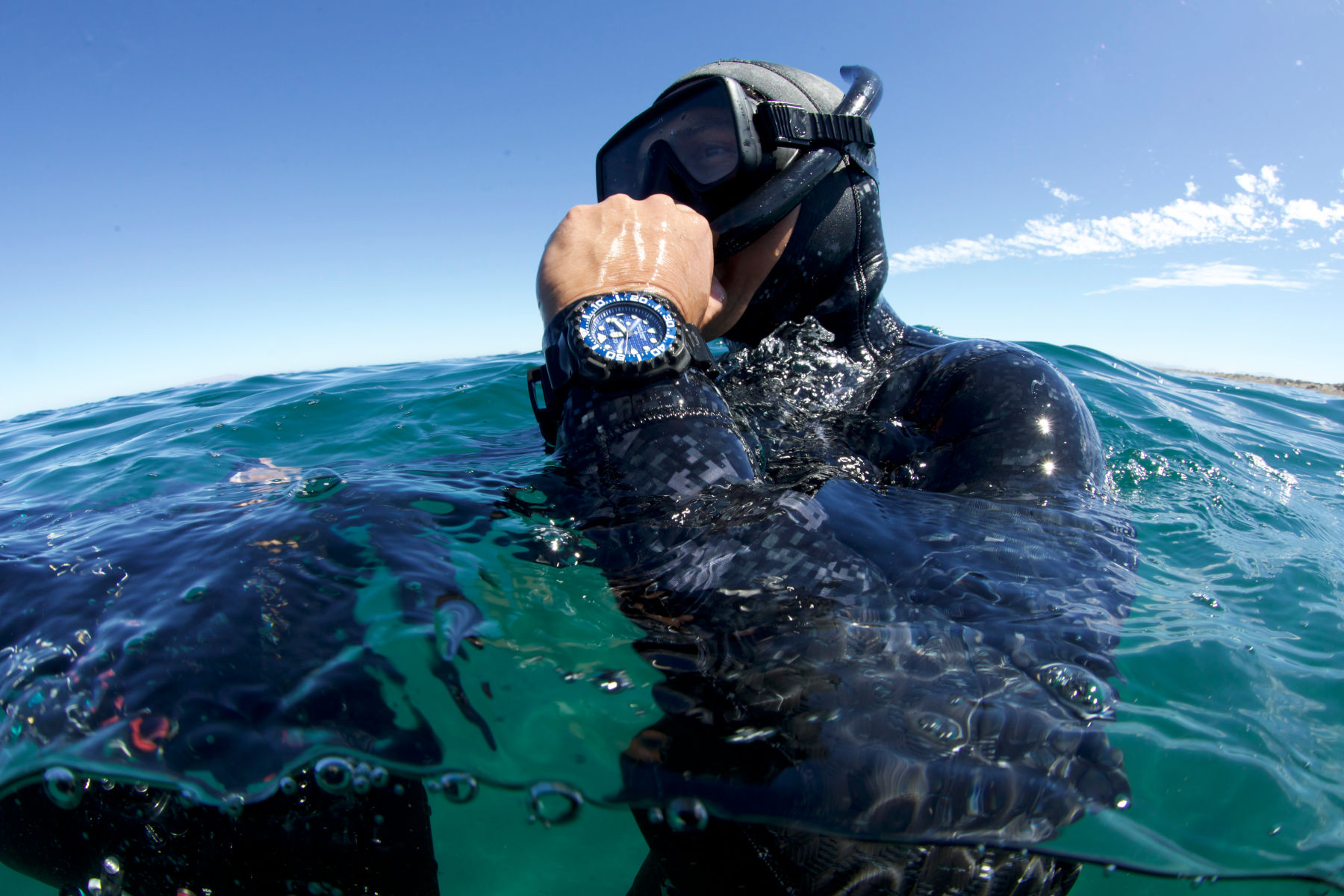 The Promaster is surprisingly wearable

Although the diameter is on the big side for any watch, let alone one that is square rather than round, the squareness is also the watch’s strength when it comes to wearability. With no protruding lugs, the Citizen Promaster is relatively short by that measure. The watch comes fitted with a black 24mm polyurethane strap and an additional extension for use on top of a diving suit. The result is a watch that undeniably looks rather imposing on the wrist but is very light and comfortable.

At the time of its debut, the original 1982 reference was the deepest-rated diving watch in serial production, capable of withstanding depths of 1,300 meters. By comparison, the current model’s 200-meter rating seems rather feeble. In all honesty, the Citizen Promaster is still a perfectly capable and ISO-compliant diver’s watch. More than that, it’s a watch that carries the whale shark theme remarkably well. 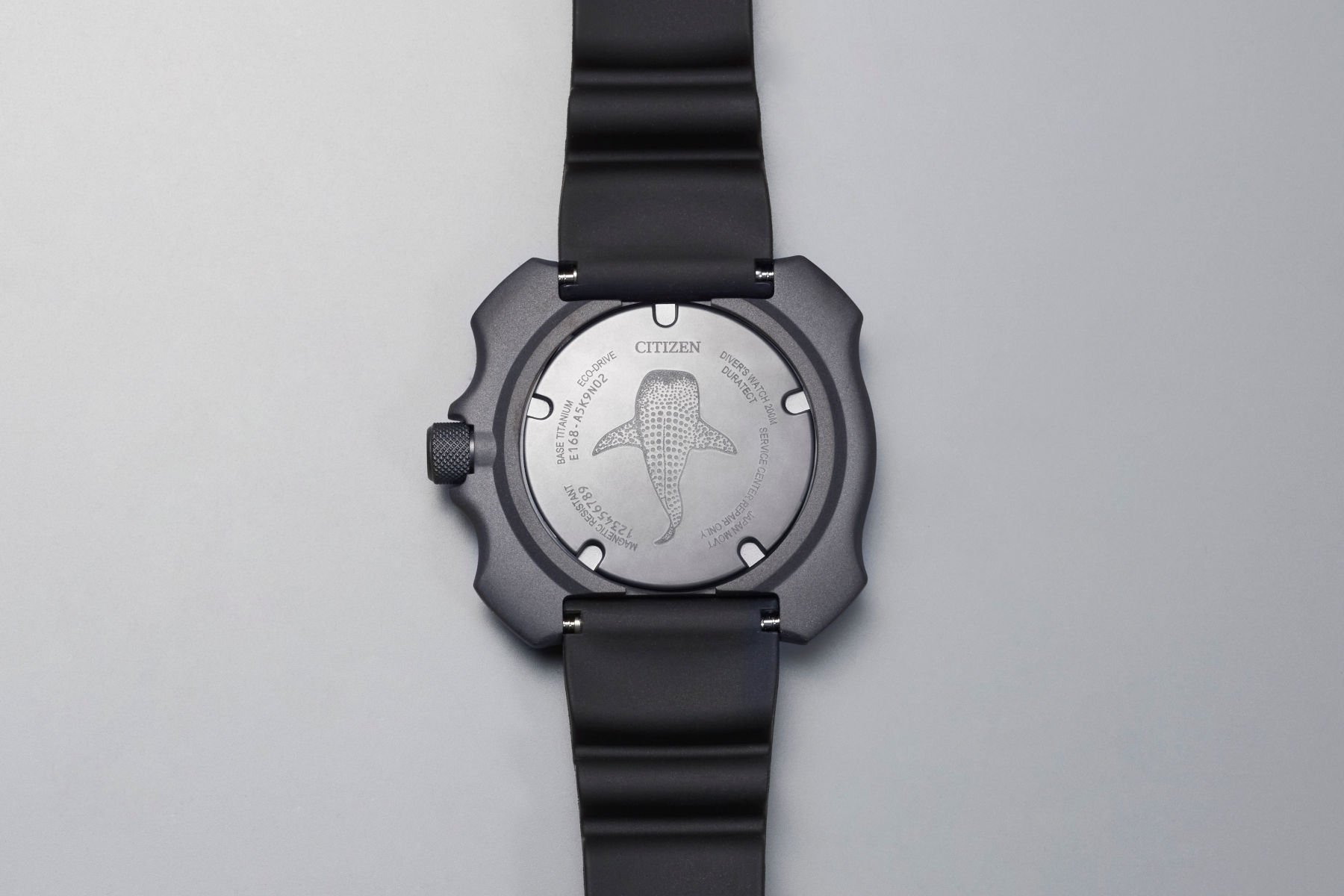 This “Symbol of the Seas” special edition is limited to 5,000 pieces and priced at €449 / US$650. A portion of each sale will support the marine conservation activities of Conservation International, an international NGO dedicated to spotlighting and securing the critical benefits that nature provides to humanity.

Find out more about the Citizen Promaster “Symbol of the Seas” Limited Edition here.