Many of the watches that we now call “iconic” date back half a century or further — the Rolex Submariner, the Audemars Piguet Royal Oak, the Omega Speedmaster, and in today’s case, the TAG Heuer Monaco. A trait that all of these models have in common is that they have — with a few exceptions — been in continuous production since they were first released. Each release of these iconic watches reveals improvements in the way the watch is made, finished, or upgraded in terms of dimensions or colors. And sometimes, one of these iconic watches gets like a dark or super-powered twin.

TAG Heuer is a brand that you are already familiar with, as you likely are with its legendary square chronograph, the Monaco. Not too long ago, Jorg wrote about another special edition, and we are back today to introduce the most recent Monaco special edition. It’s a special model to celebrate the introduction of actor Jacob Elordi (known for his role in HBO’s Euphoria) as the newest brand ambassador and a celebration of the eponymous F1 Grand Prix race, in an all-black, titanium Dark Lord revival. 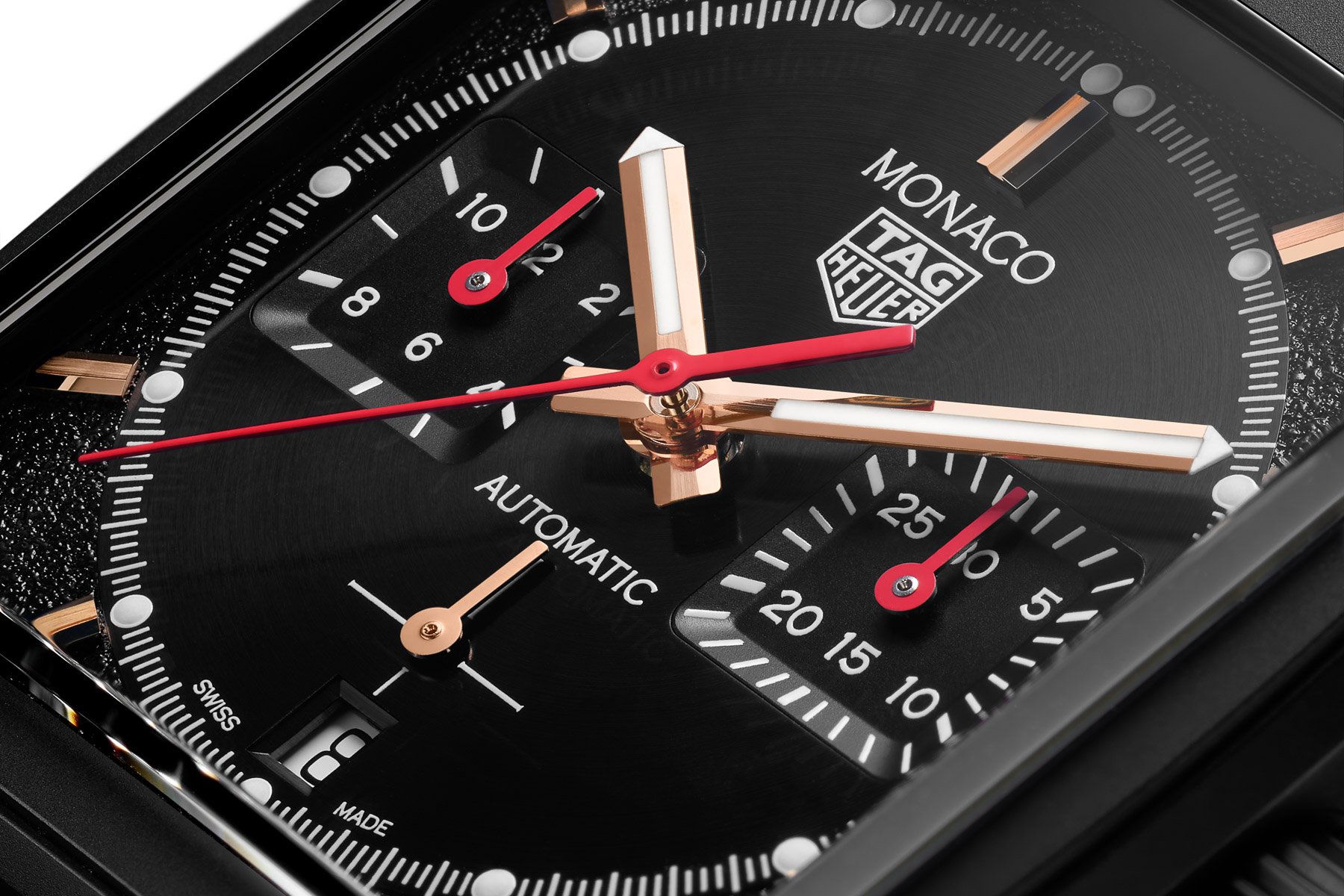 As mentioned in the introduction, the Monaco has secured a spot in the Pantheon of iconic watches, and this is for a few good reasons. It was the first micro-rotor chronograph and may even lay claim to the title of the first automatic chronograph to hit the market (if not the first, one of the first three). It was also the first chronograph with a square, water-resistant case. Furthermore, it is iconic because it is still made today, which is something that cannot be said of many historical watches. The Monaco has been in continuous production since 1969 (except for a hiatus of a few years at the beginning of the quartz revolution). And though this is a matter of perspective and opinion, one could say that each time it sees a revamp, it gets even better. 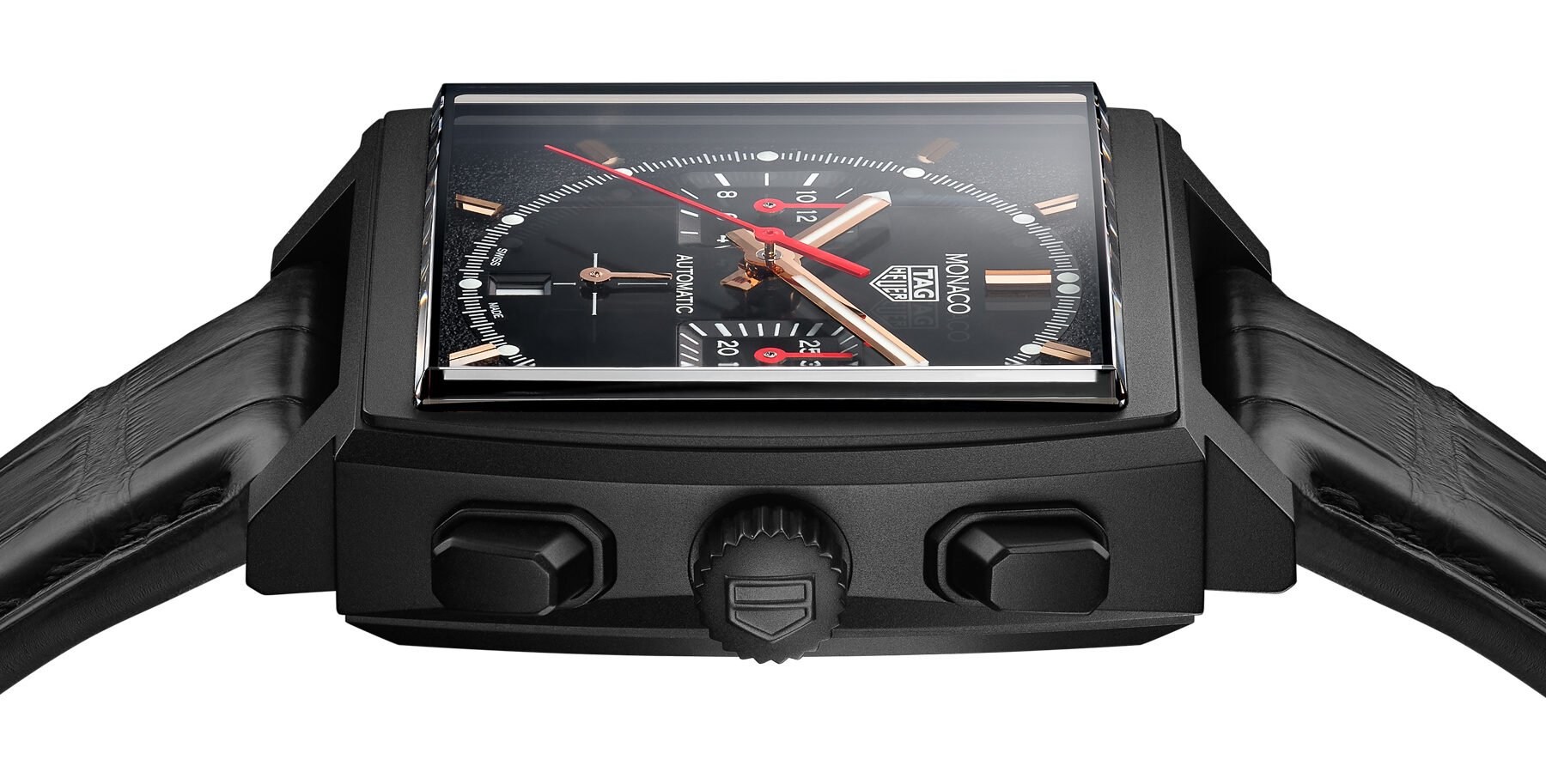 A common trait of iconic watches is that when they first debuted, they looked very different than what the public expected to see at the time. I bet that the Submariner looked strange to many people back in 1953, and I know for a fact that the AP Royal Oak was somewhat of an acquired taste. To be frank, the Monaco looked odd to me at first glance, and chances are that I will probably never own one even though I could afford it. However, I do have to admit that it’s cool, both in the way it looks and in the way it is made. 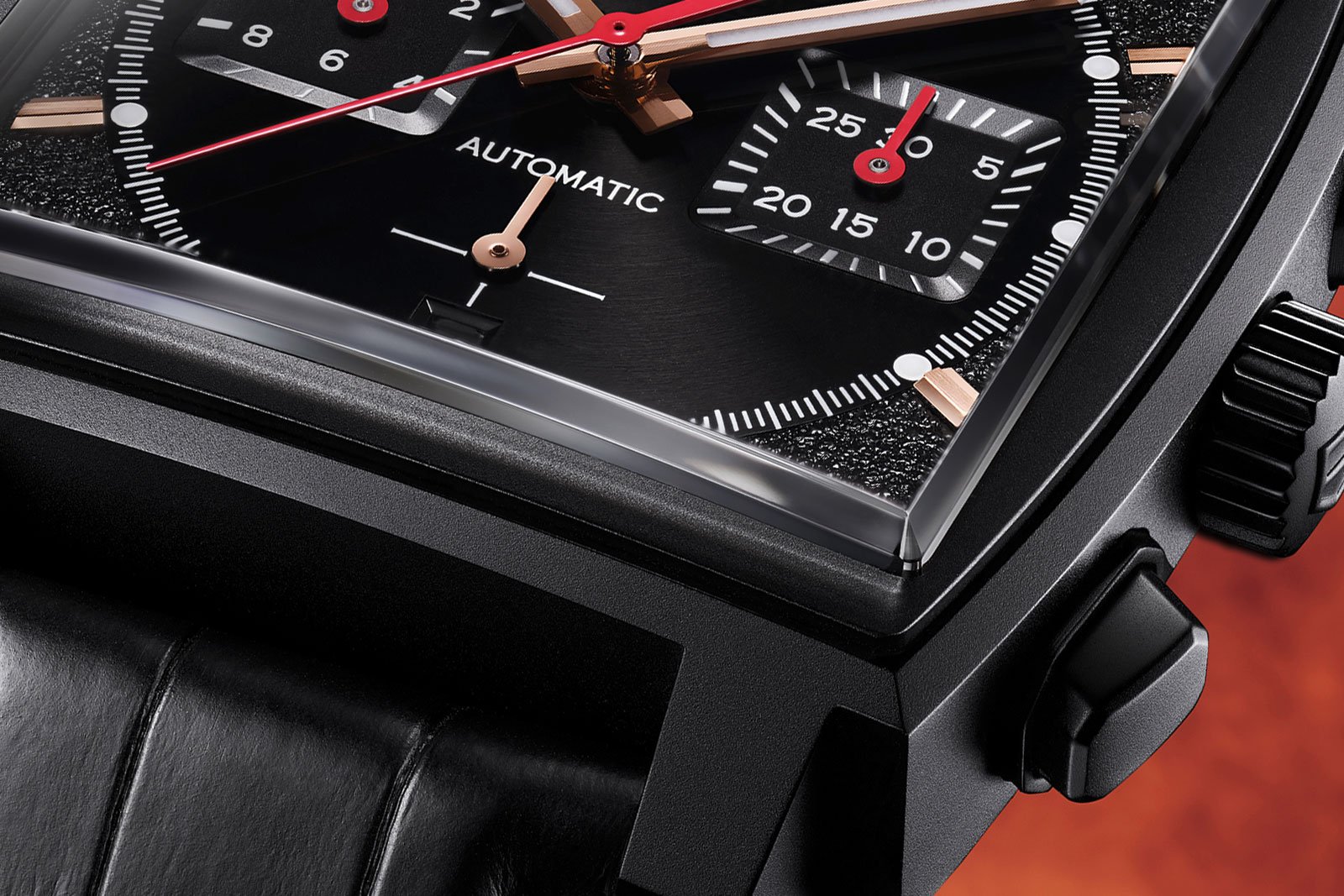 Looking at the numerous iterations of the Monaco over the past 50+ years, one will easily notice that Heuer (back then) and TAG Heuer (now) never ran out of ideas to make this model look new and refreshing. Just as Ford comes up with a redesign of the Mustang every few years that still invariably looks like a Mustang, the Monaco is still a Monaco although it has come in different dial colors and with variations in the design of the markers and sub-registers. Each variation, however, has a square case and the same or similar dimensions, therefore preserving the design ethos of the original from 1969. 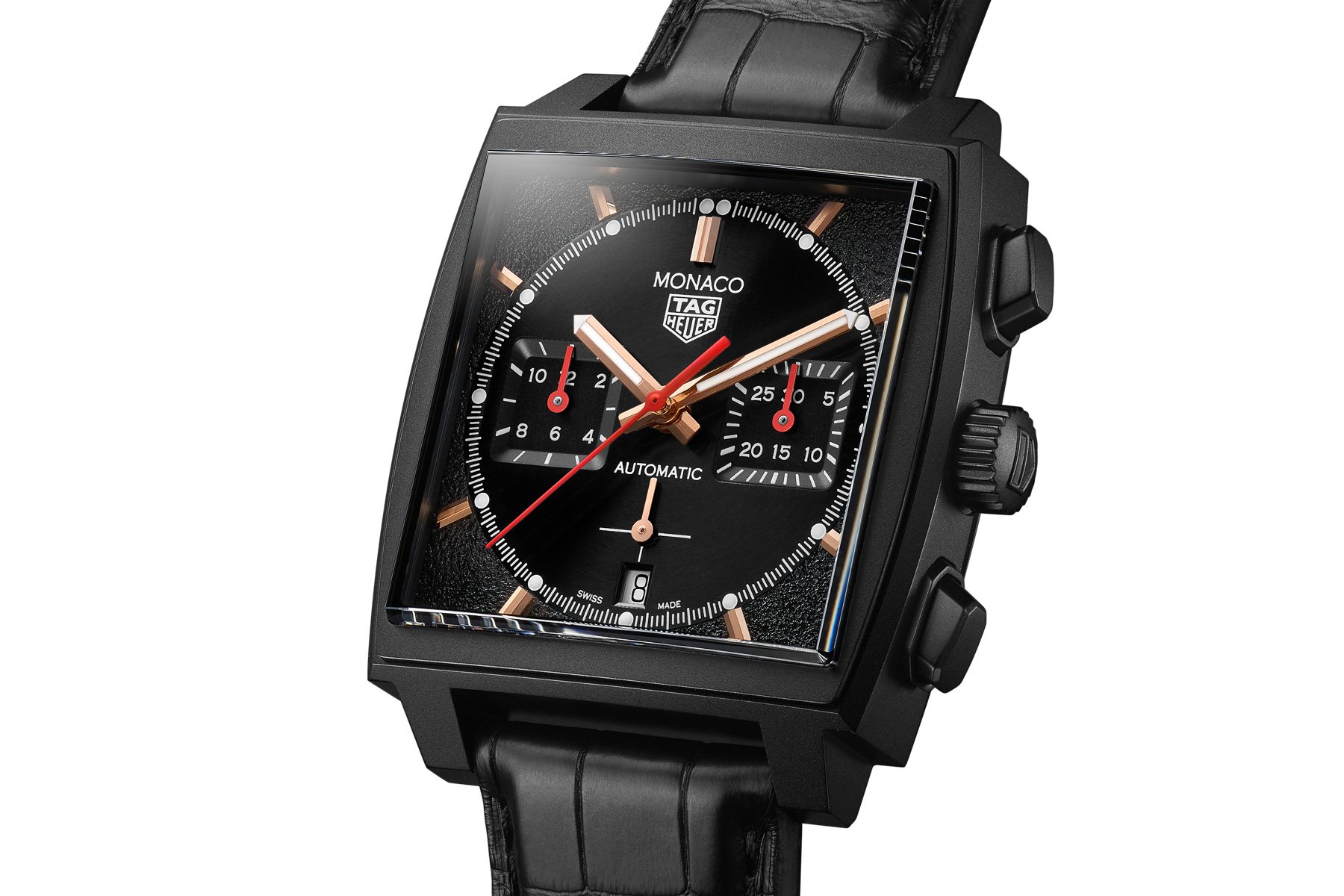 It must be hard for the designers at TAG Heuer to come up with new ways to re-interpret an icon. I’d say that they did a great job this time around with this full-titanium, blacked-out version. The case is Grade 2 titanium with a black DLC coating while the markers and time-telling hands are in an 18K rose gold that nicely contrasts with the stark black dial. Coming in with a 39mm diameter with 100 meters of water resistance, this special edition of the Monaco preserves its avant-garde spirit with a few more pops of vibrant red on all of the chronograph hands. 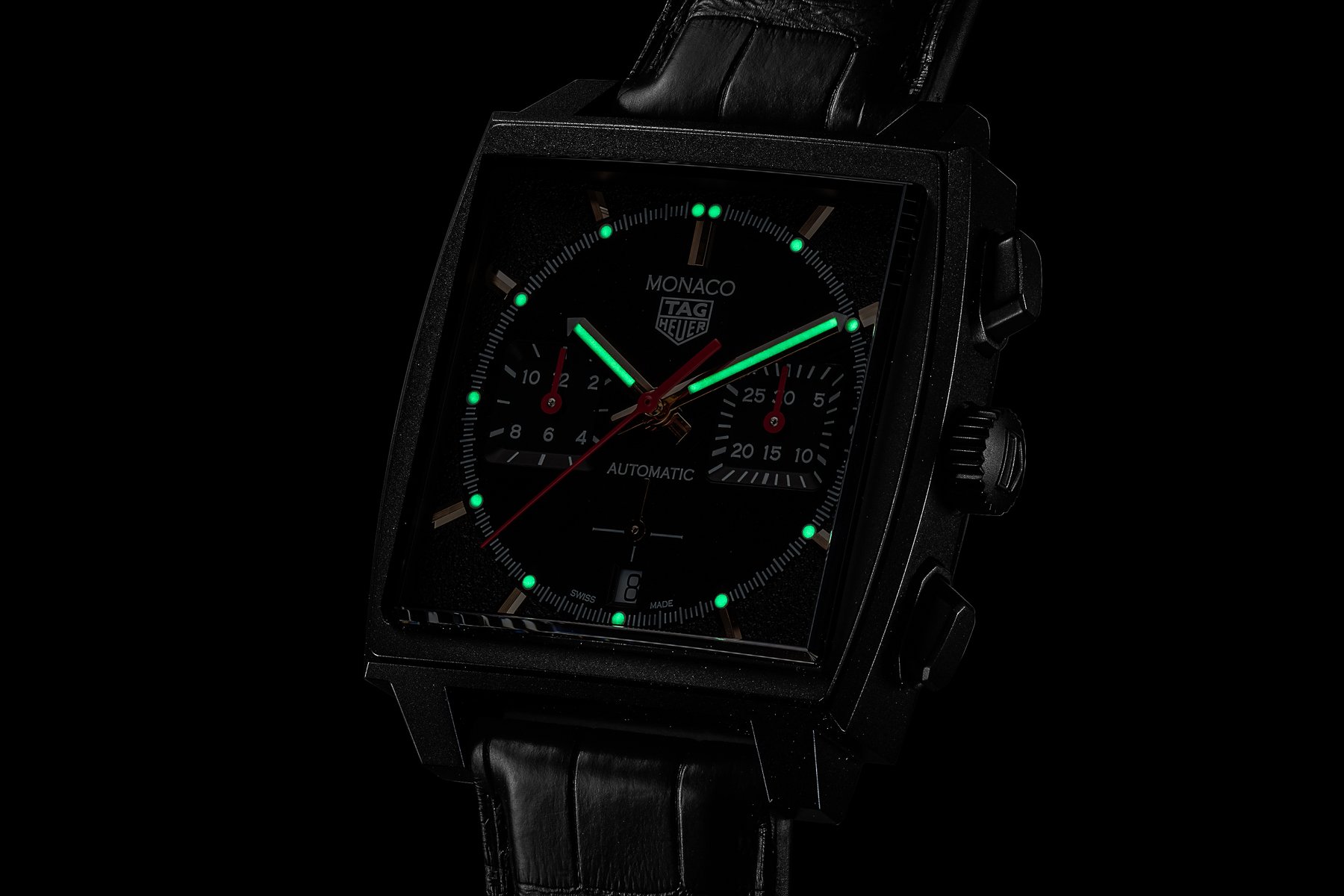 The return of the Dark Lord

Fans of the TAG Heuer Monaco were adamant about having the brand bring back the iconic (maybe I should find a different word…) 1974 black-PVD Monaco dubbed the “Dark Lord”. This watch could have indeed been worn by Darth Vader, who I imagine could have led an evil intergalactic army while proudly wearing this watch. Not that Heuer itself gave the watch that name — we can thank the brand’s fans for that — but we’ve got to agree on this: a square, avant-garde, all-black automatic chronograph on a black leather strap looks quite cool.

It’s nice to see brands bring back the rarer variants of models from their catalogs when the more standard versions have been in production for decades. If I could write a 10,000-word article, I would gladly take you on a virtual walk through the Monaco’s history and numerous variants as they have appeared in the past 53 years, as well as dissect each aspect of this new Formula 1 Monaco Grand Prix special edition (for example, the grainy finish on the outside of the minute track that mimics the grip of tires on the track or the manufacture Calibre Heuer 02,) but that would be for another day. 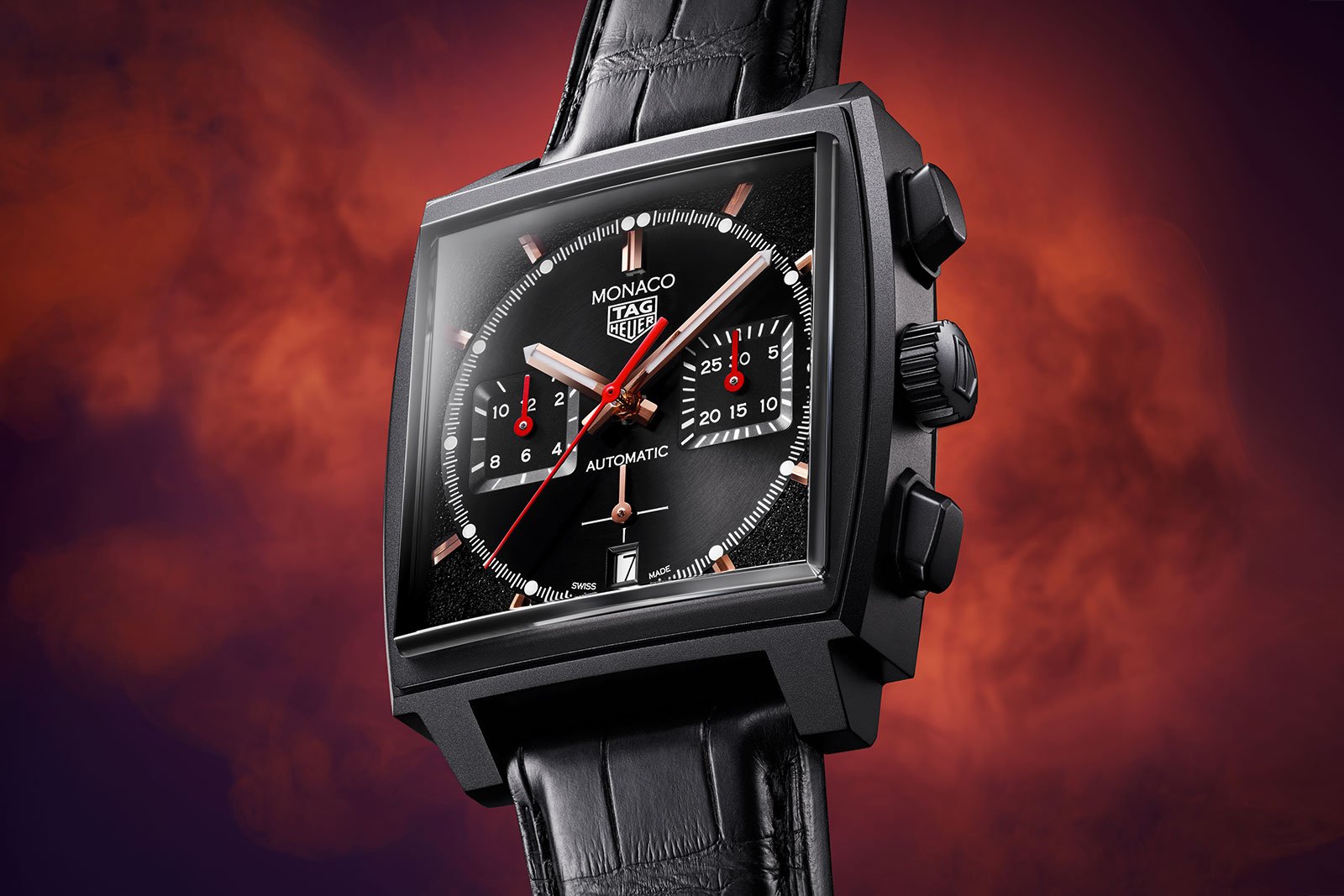 For now, I will leave you with this: whether or not square chronograph watches are your jam, it’s fair to assume we can agree that this Monaco is cool. It’s an amalgam of different variants of the Monaco of the past half-century — all of the small details that have made each reference stand out from another since 1969. It’s made of black DLC titanium, it has a manufacture movement, the dial showcases different types of textures that profoundly link this model to racing.It’s made with modern materials and modern technics, and, quite honestly, it’s eye-grabbing.

So, what are your thoughts on the newest Monaco special edition? Is it worth the asking price of €7,750? Share your comments below, and for more information, check out the TAG Heuer website.