Having met the Apollo astronauts several times in the flesh, I noticed many wore their Speedmaster Apollo-Soyuz watches from 2010. That Speedmaster was famously equipped with meteorite sub-dials. The prices of that particular limited-edition Speedmaster have increased so much that it has become an out-of-reach grail watch for many. It’s the same case with many other meteorite-dialed watches out there. Another example that comes to mind is the white gold Rolex GMT-Master II, also pricey and equally equipped with a meteorite dial. However, just because a watch has a meteorite dial, it shouldn’t mean it’s unaffordable.

Though it’s not necessarily everybody’s cup of tea, I have a weak spot for watches with meteorite dials. Ever since I first saw those dials used in Daytonas and Speedmasters, I have been smitten by them. They bring something unique to a watch. Not only because it’s a rare and incredibly old material but also because of its interstellar origins. Plus, the watch-enthusiast space being a rather nerdy one, using materials straight out of a sci-fi movie really resonates beautifully. 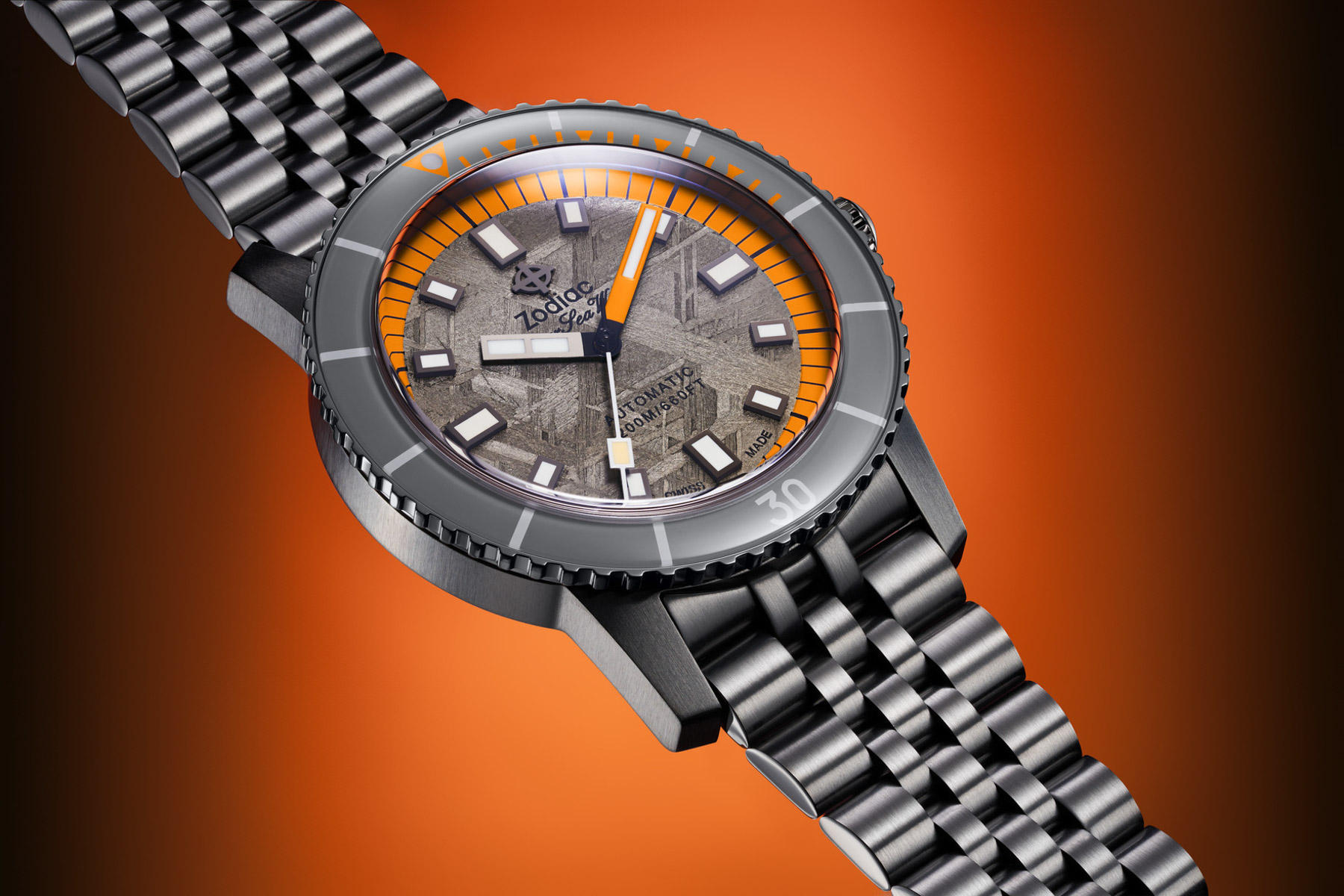 Today, the online retailer Watches.com and the Zodiac brand introduce the Super Sea Wolf Meteorite diver. Zodiac as a brand needs no further introduction. We’ve covered its watches in the past, and even several times recently, specifically the Super Sea Wolf diver. It has become a darling of the editorial team, it would seem. But not only that, it recently won our voting contest (Sunday Morning Showdown) against the much more expensive Breitling SuperOcean 42. Not bad, especially when you consider that the Zodiac costs a fraction of the Breitling’s price. However, it seems that the cult-following of Zodiac enthusiasts is truly a passionate bunch. And it’s hard to argue with that enthusiasm, especially when the watches look this good. 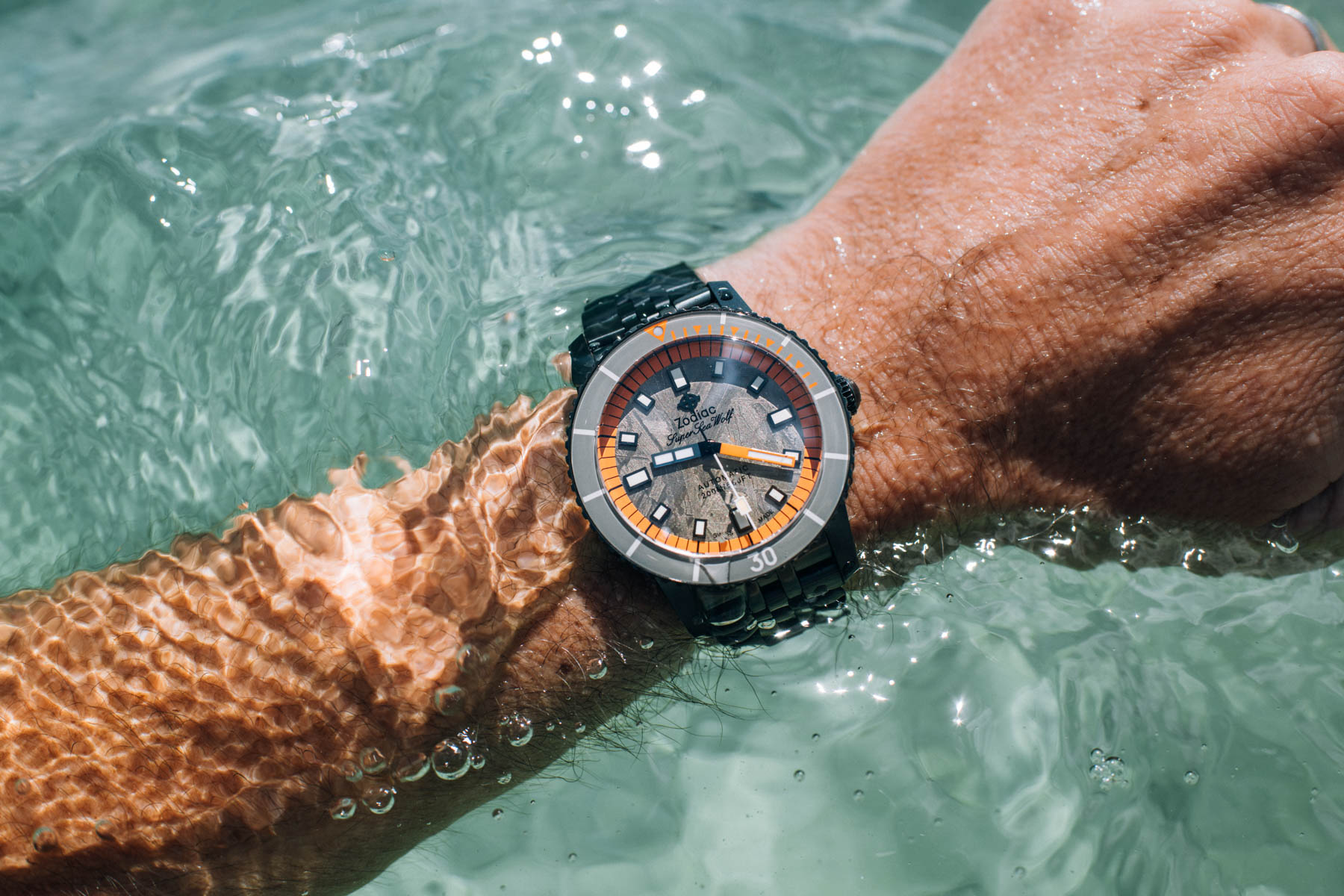 The Zodiac Super Sea Wolf Meteorite is limited to 182 pieces. Due to the almost crystalline structure of the meteorite material, each piece has a dial with a unique pattern. The material used was part of the Muonionalusta meteorite, which crashed down approximately 800,000 years ago in the Norrbotten region of Sweden. 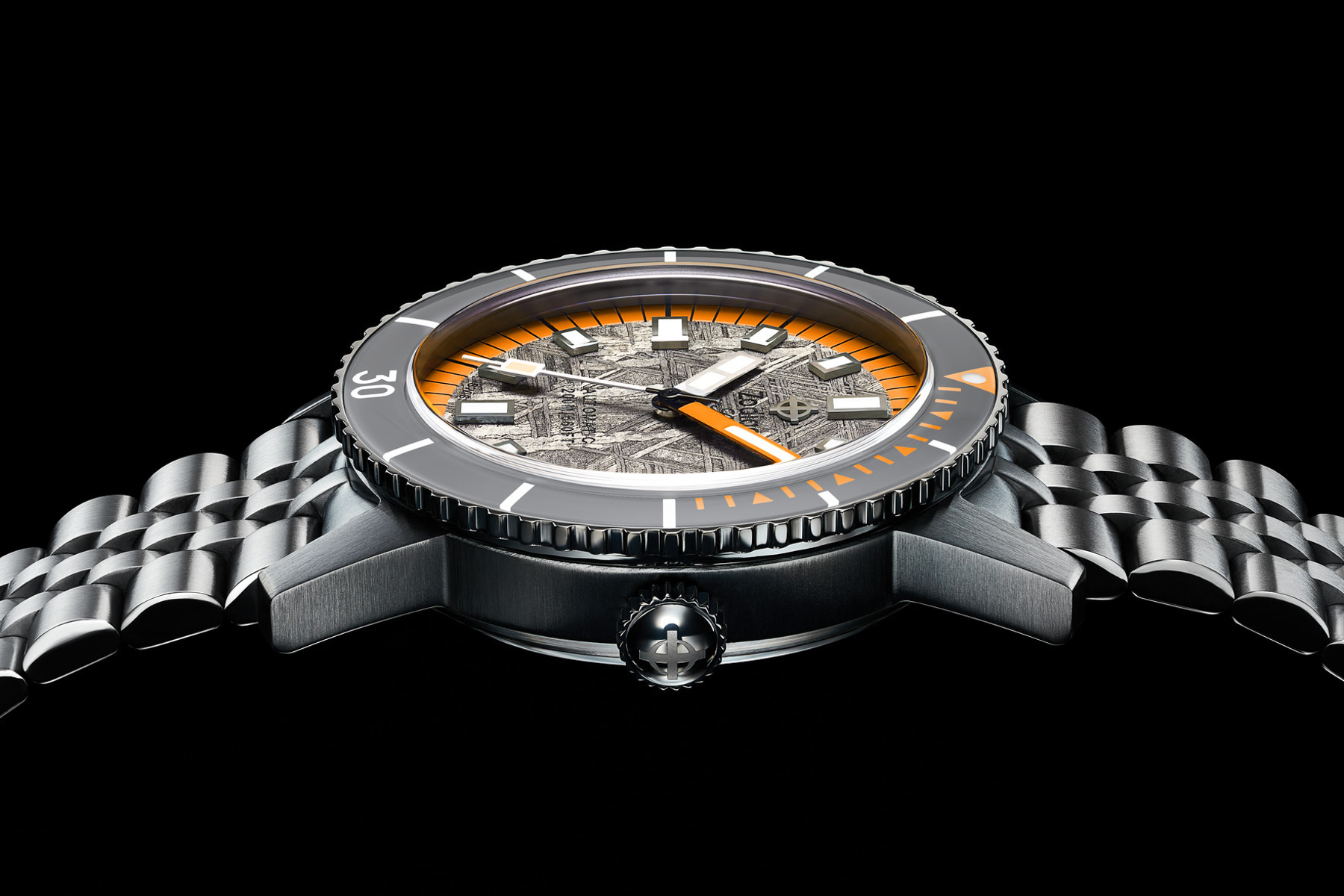 All 182 Zodiac watches are — aside from the dial pattern — identical. They feature a “space gray” DLC-coated case and bracelet. This is a neat touch, as at first glance, you may be fooled into thinking it’s a raw-steel finish. However, this DLC treatment gives the case and bracelet a unique look. The Super Sea Wolf is powered by an STP 1-11 self-winding caliber. Technically speaking, this is an in-house movement, as both STP and Zodiac are owned by the Fossil company. As you might expect with a limited edition, each watch will be individually numbered. 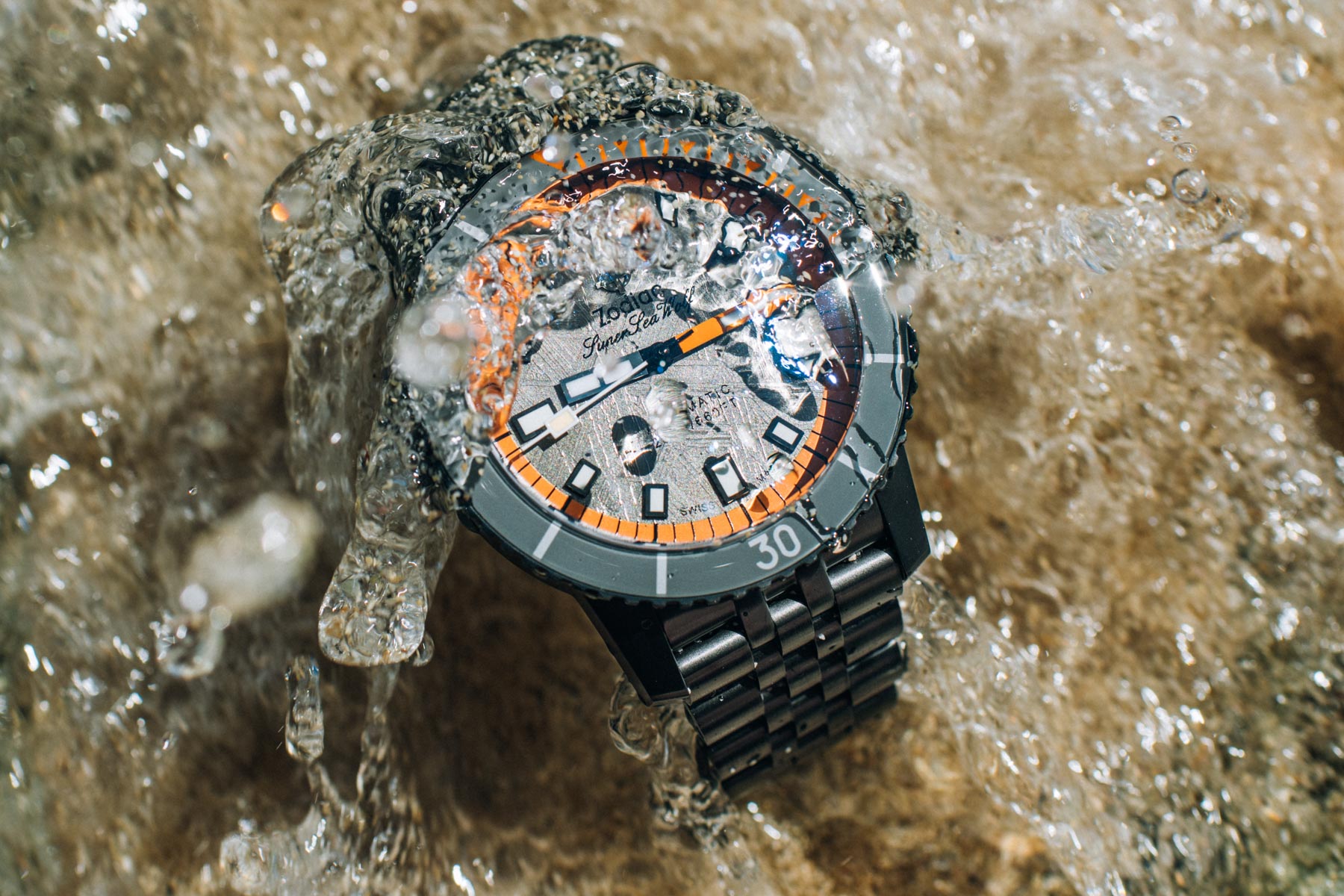 The Super Sea Wolf Meteorite has a diameter of 40mm and measures 13.9mm in height. The lug width is 20mm, and though there’s little reason to take this comfortable Jubilee-style bracelet off, you can always change the look of the watch by adding the included orange tropic rubber strap. The orange elements on the dial, hands, and diving-scale bezel contrast nicely with the gray bezel, DLC-coated steel, and meteorite dial. The Zodiac Super Sea Wolf Meteorite has a water resistance of 200 meters / 20 ATM. 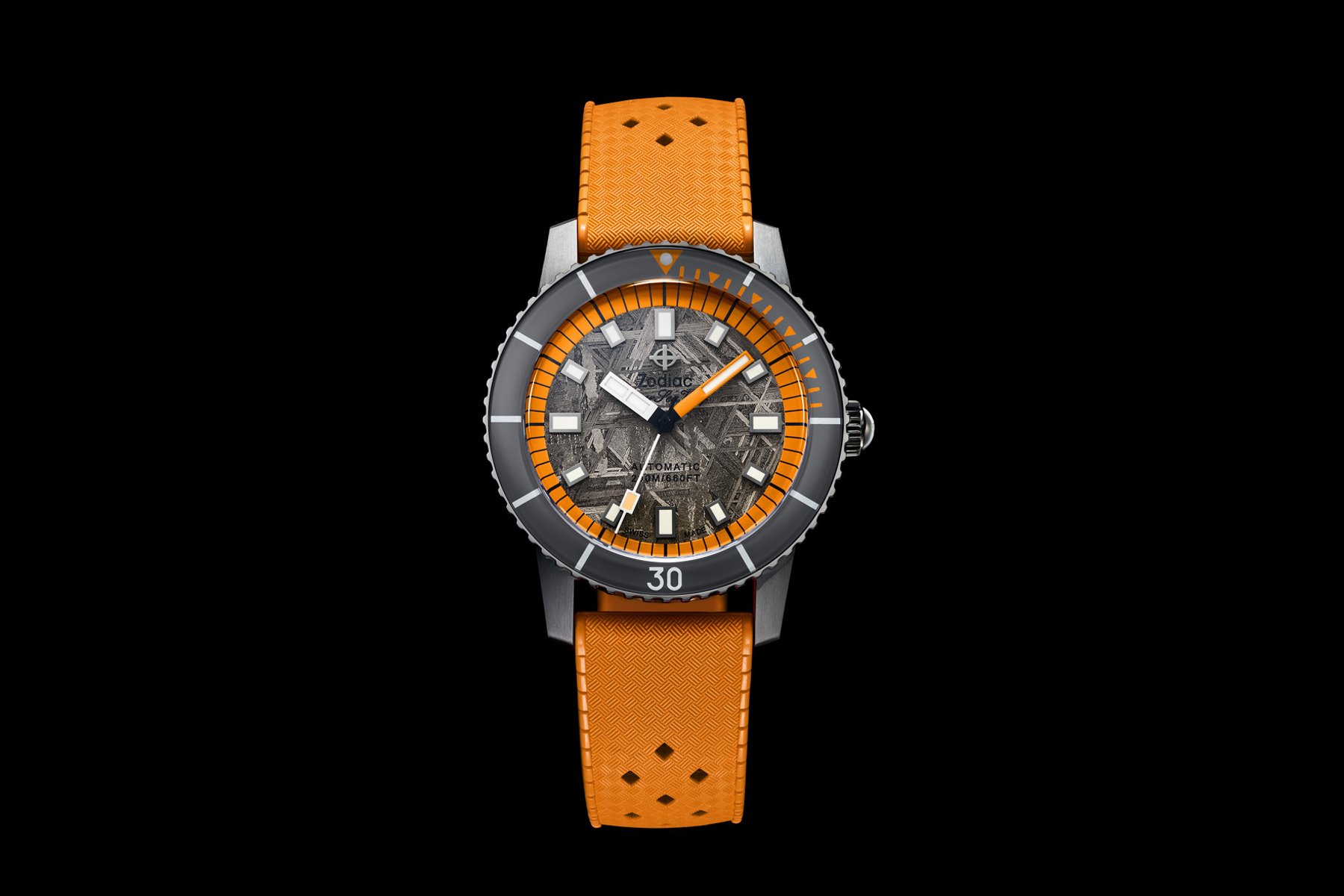 Watches.com has been active in dealing watches since 1999 and has been a long-time Zodiac retailer. Other than Zodiac, the site is also an authorized dealer of Citizen, G-Shock, Timex, Undone, Xeric, and many more. The site’s team reached out to Zodiac in 2019 to design a one-of-a-kind Super Sea Wolf, and with the Meteorite, they accomplished that perfectly.

The watch can be preordered starting today, and shipping starts on September 26th. The price of the watch is $1,795. You can reserve yours here.