Recently we found our way to Munich, the Bavarian capital, early in the morning. Upon arrival, we joined several other journalists for a typical local dish called “Weißwurst”. Time to start the actual Hanhart Primus program. 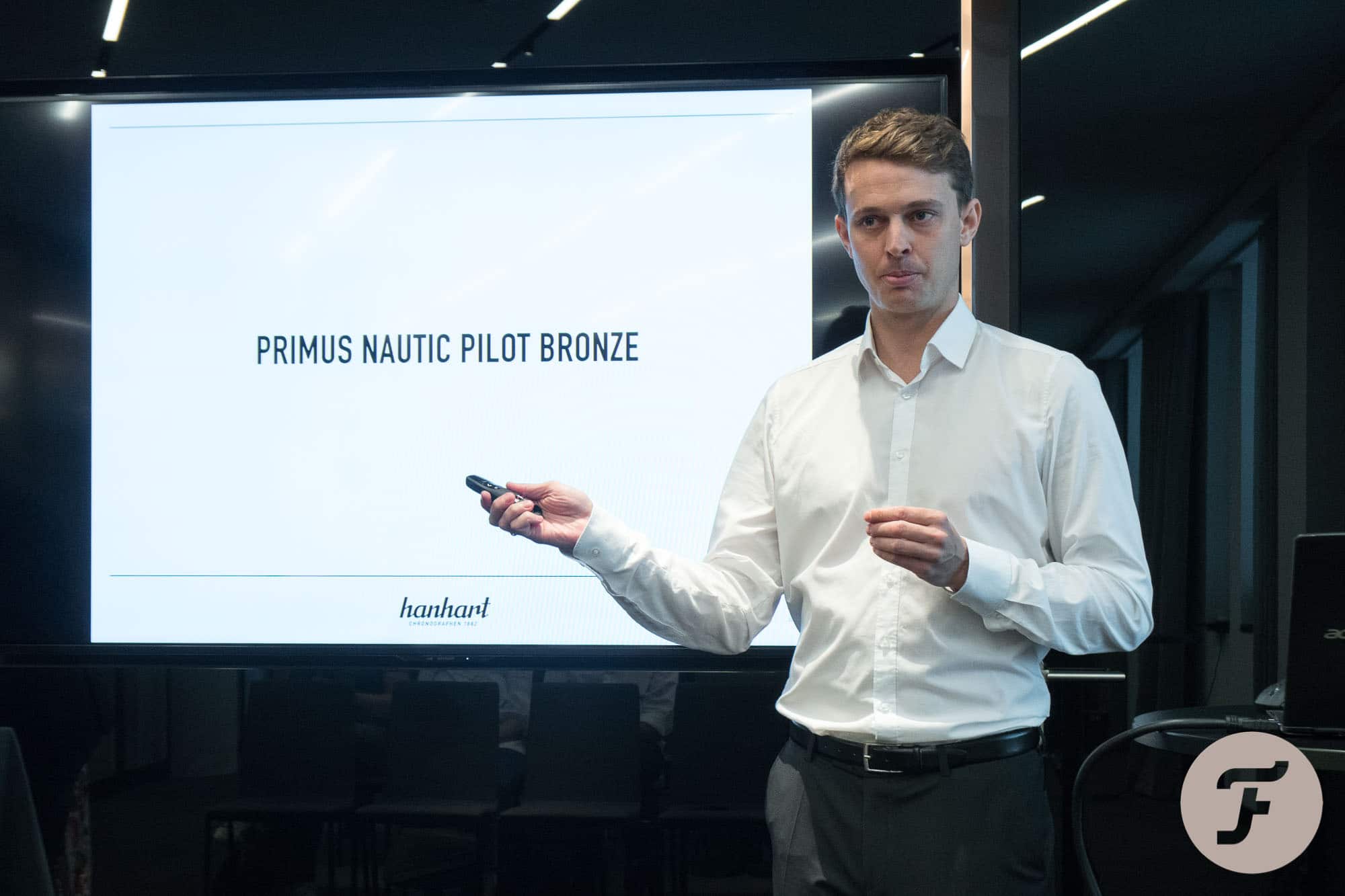 We were invited to join Hanhart for the presentation of their latest novelty. This small brand that has its roots in Switzerland and dates back to 1882. Starting as a watch shop, after 20 years in the existence they relocated the business to Schwenningen in southern Germany. Still close to the Swiss border they began a watch manufactory. Success didn’t come until the youngest son, Wilhelm Hanhart, joined the company in 1920. Being into sports, he wanted to create an affordable and reliable stopwatch. In 1938 they relocated to Gütenbach where they are still located today. 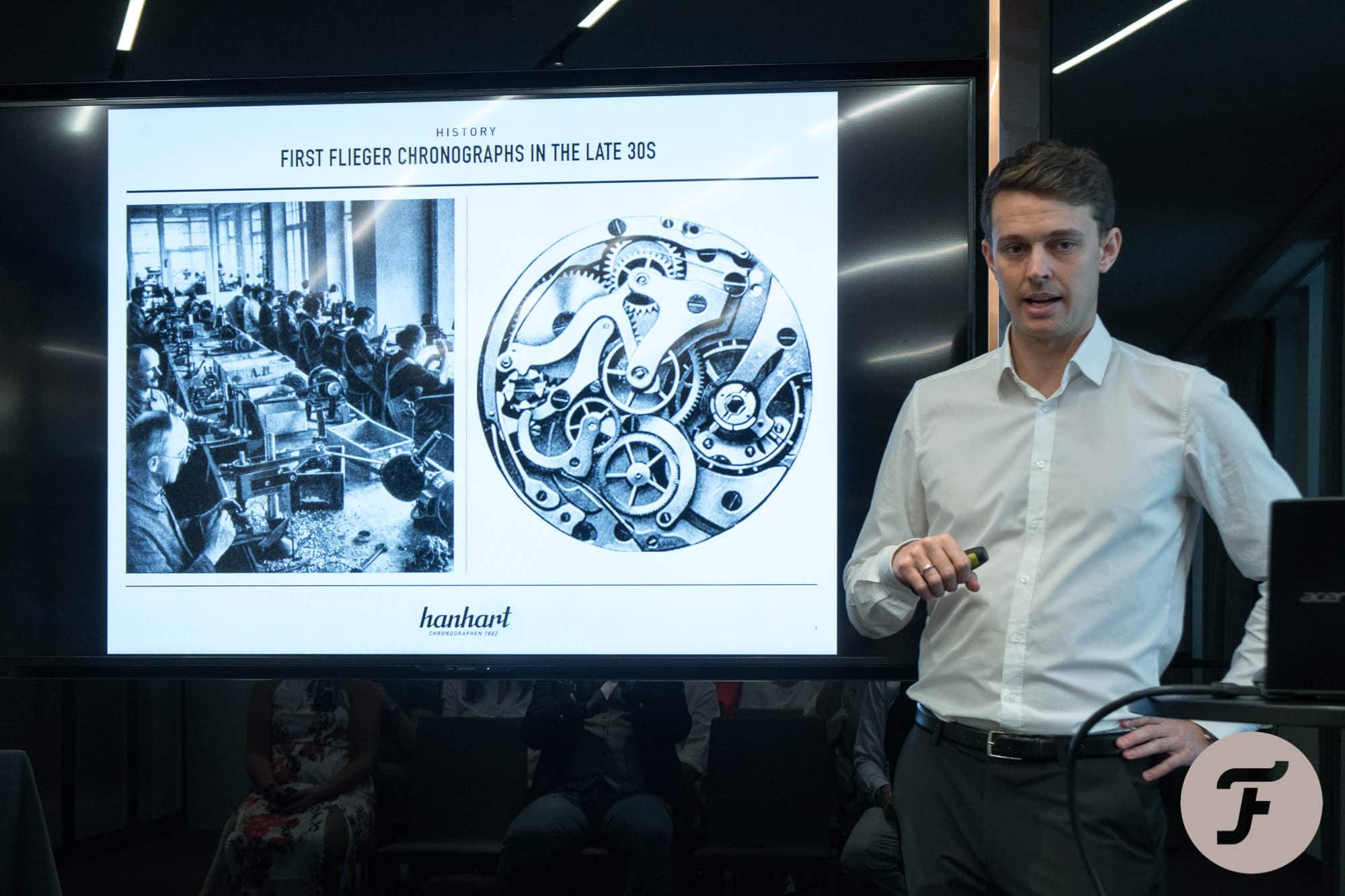 In the late 1930s, they also started making wristwatches, and in 1938 they presented a single pusher chronograph. This would be the beginning of a new era for Hanhart. From here they designed as asymmetrical pusher chronograph which is typical for the brand. Both configurations are still part of the Pioneer collection of Hanhart. 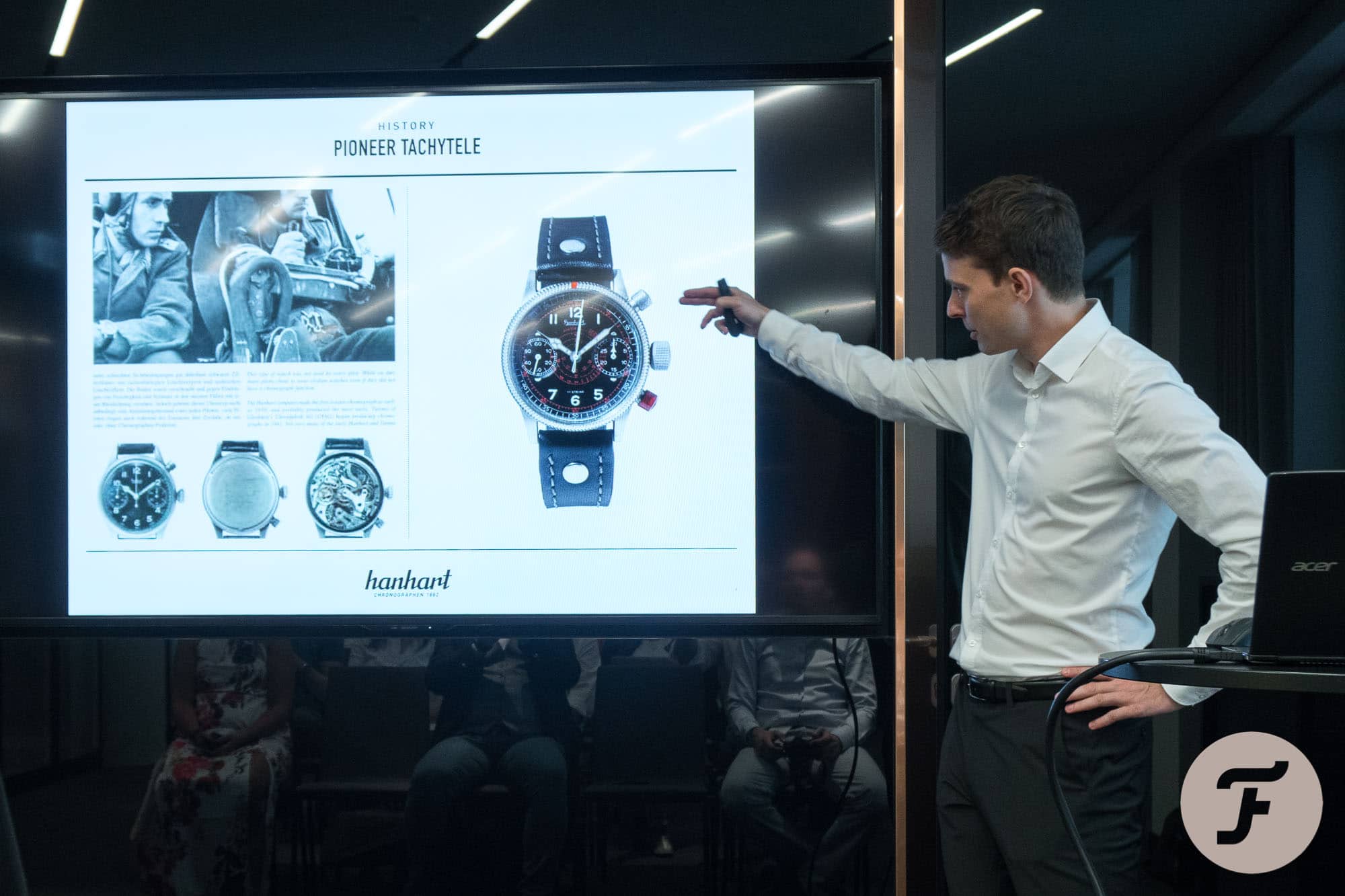 During the presentation, we learn about the remarkable red button on their chronographs. Many chronographs in the past had a flyback function. So it would reset instantly and basically, the red button was to make you think twice before using it. Hanhart believes there’s a story to it though, about a pilot who left home to go on a mission. When he was about to step into his plane, he noticed that his wife had painted one pusher with nail-polish. See below. 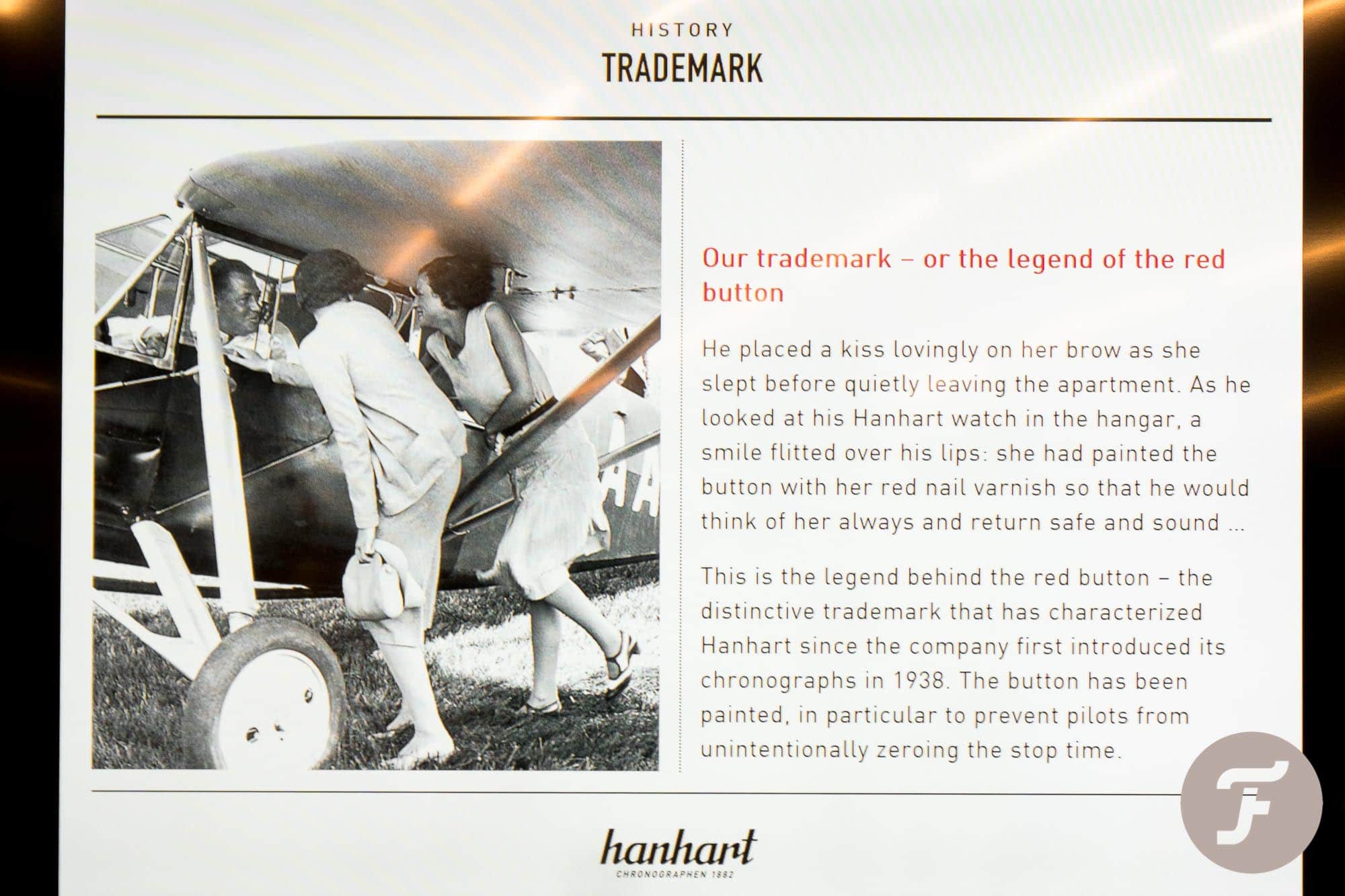 Looking at the History of Hanhart, they have mostly been active in aviation and racing. Two fields they are still active in today with brand ambassadors in the Red Bull Air Race World and Dakar Rally, to name a few. After the introduction to the brand, it’s time to move on to the novelty presentation of today. For the Primus collection, which is the modern interpretation of their history, there is a new limited edition. Let’s have a look at the Hanhart Primus Nautic Pilot bronze. 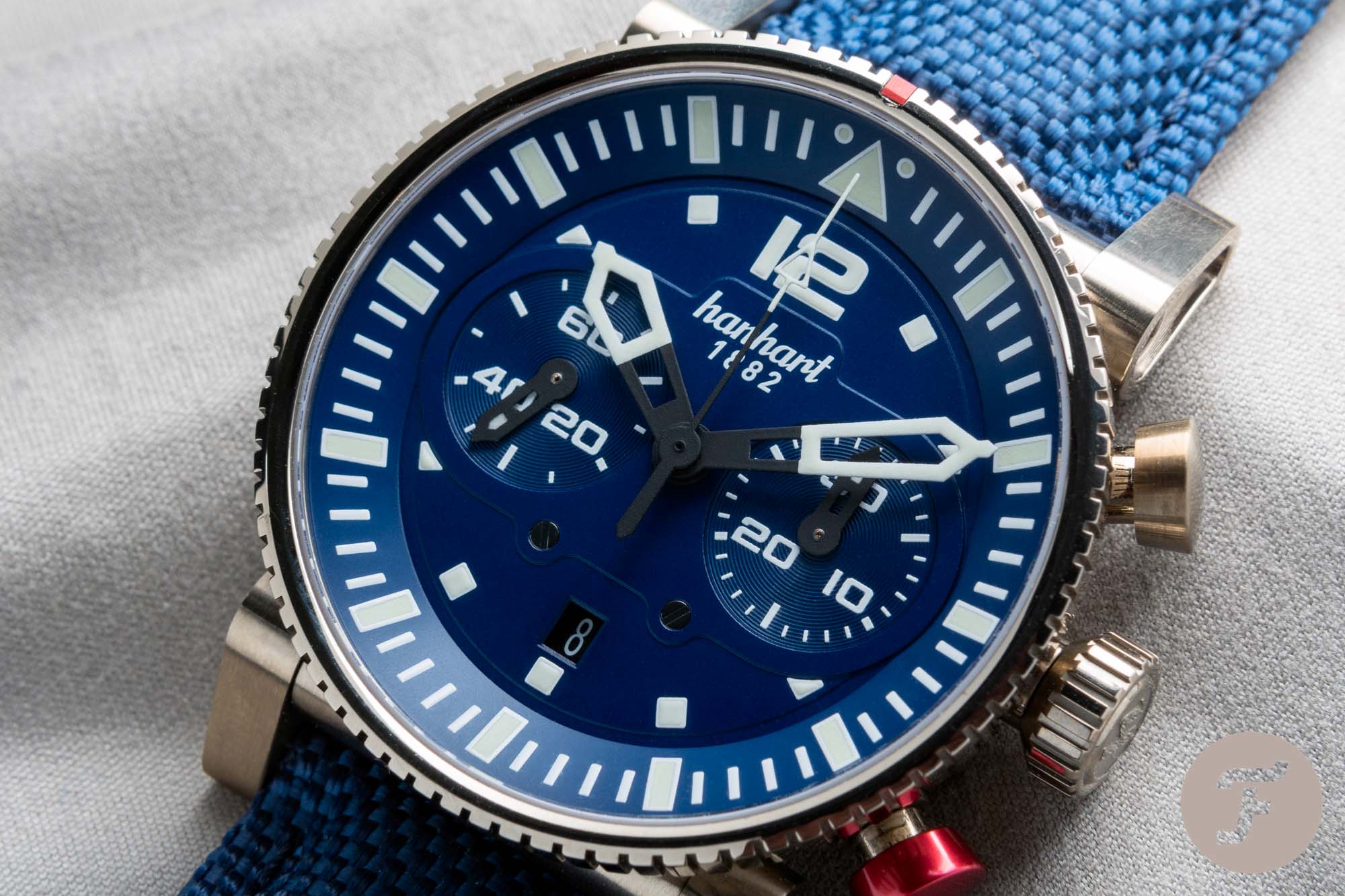 As the name gives away, this watch isn’t explicitly aimed at sea or aviation, but both. Perhaps it would have been clearer to leave out those specifics in the model name. When you look up the Primus collection, they already make clear that these watches are ‘sporty and contemporary’. That’s just what the collection is about. Most of the models share the same looks and characteristics. Only the diver stands out for its rotating bezel. The differences can be found in the dial designs, straps and case finish as you can expect within a model line.

Where you would think this Hanhart Primus limited edition is a bronze watch, it’s time to look at the full specs. The stainless steel case comes with a bronze coating that has two specific characteristics. What most people love about bronze is that it changes colour over time. Although this process can be accelerated (and reversed) not everybody appreciates it. Here’s the first good news for you as the bronze PVD coating will not be affected by the elements. So years from now it will still have the same new bronze look. 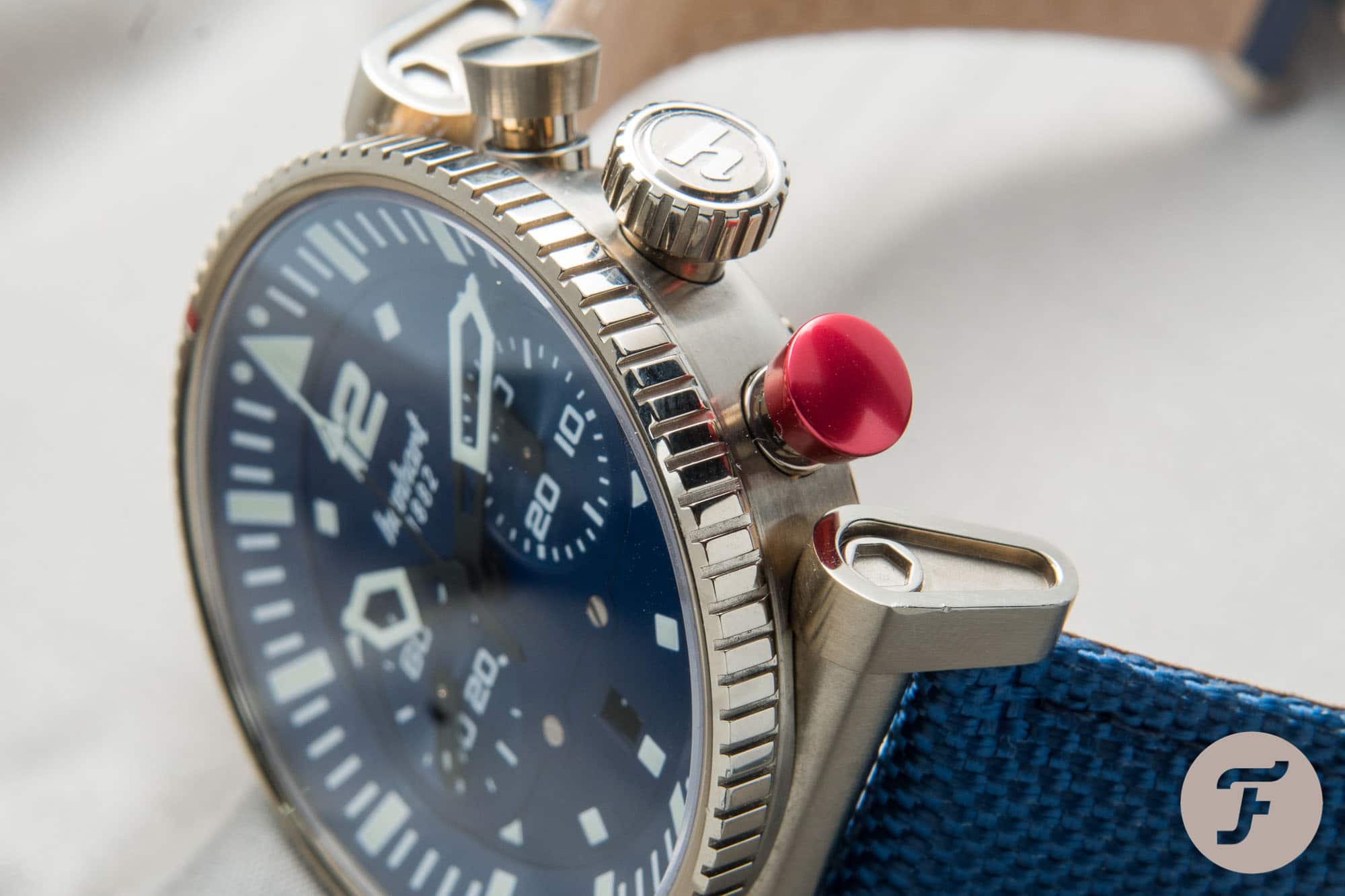 Another noteworthy thing is the hardness of “1300 Vickers”. Without diving too deep into the technical matter, it means that this coating is at least 5x harder than regular steel cases. Of course, this is measured in a laboratory, so it’s hard to determine what the effect will be in daily life. But we can only guess that it’s not as prone to scratches compared to an uncoated watch. 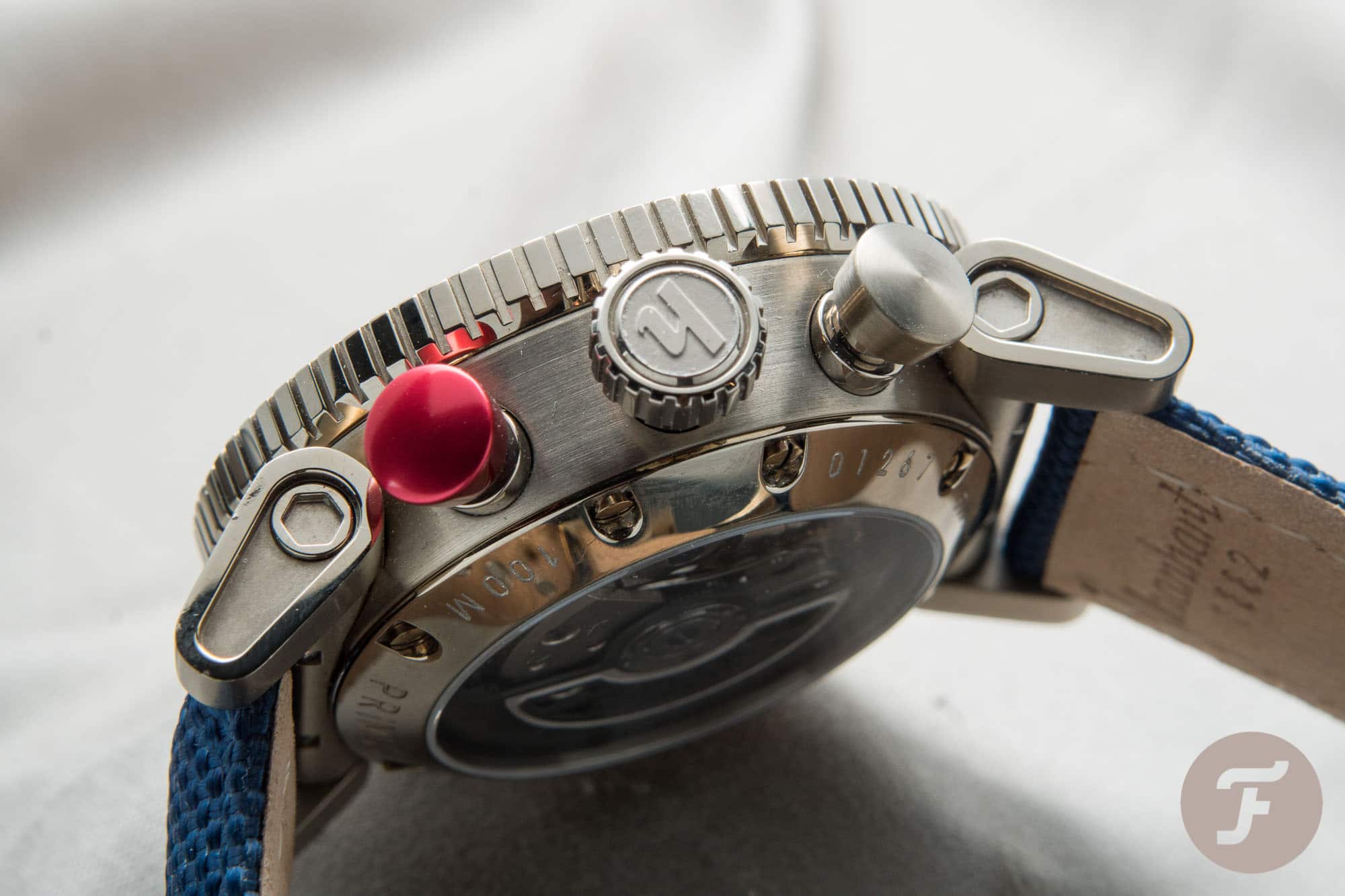 The deep blue colour of the dial links to the sky and in the water and makes an excellent combination with the warm bronze DLC coating. The matching blue textile strap with folding clasp looks decent and durable. To make this watch adjust to different wrist sizes, the case comes with flexible lugs which adapt to your wrist. Something you can find on both new and vintage watches. With rather large hands the time is easy to read and thanks to the cut-out center it doesn’t entirely block the dial underneath either. Again this watch comes with the red pusher at 4 o’clock and non-rotating bezel with the red dot at the top. Both link back to the history of the brand. 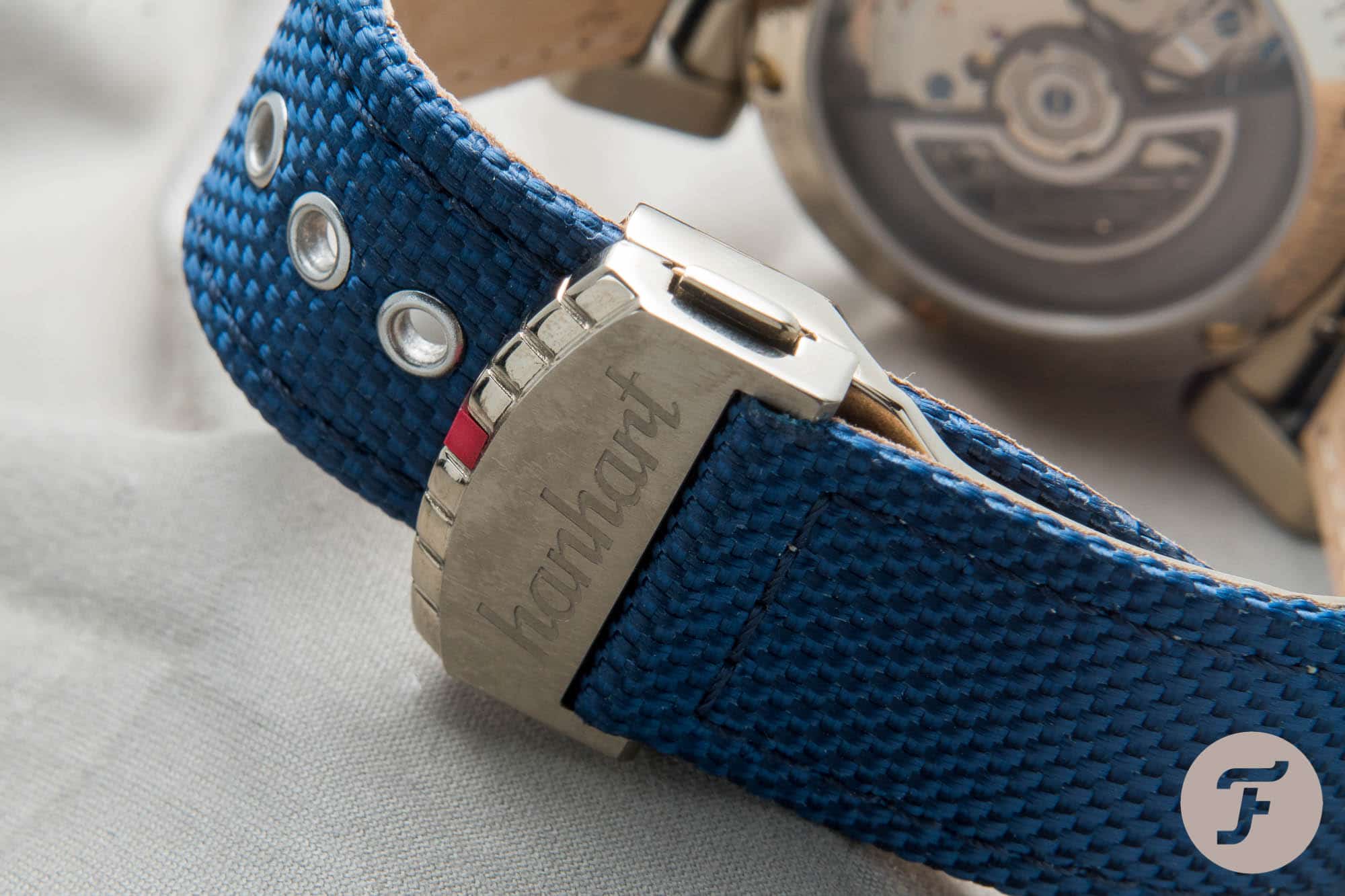 Through the transparent case back, the automatic Sellita SW510 movement is visible. It comes with a power reserve of at least 48 hours. The rotor is open-worked and shows the brand name, which makes a beautiful detail. Another noteworthy thing is that we were shown the prototype, which has ‘Swiss made’ like current Hanhart Primus models. The final watches will be German made in line with the roots of the brand. At some point, all Hanhart Primus models will be made in Germany. 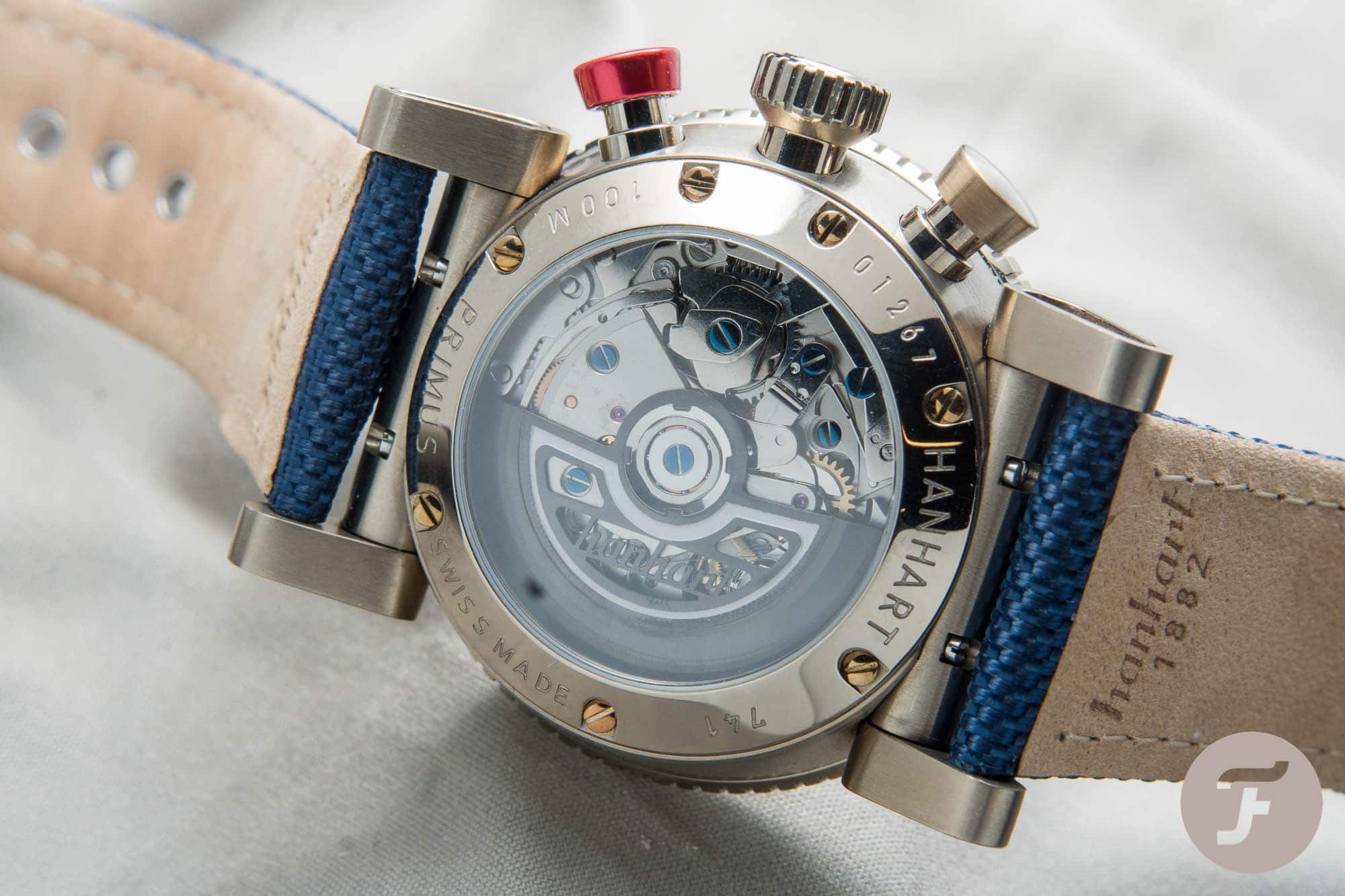 As I mentioned earlier, blue and bronze make an excellent combination. Due to the tapering design of the case you get the impression that it’s a rather thick watch while it’s only 15mm in height. Touches from the history of the brand in the shape of a red pusher make a beautiful and functional detail, although most will know which button does what on their chronograph. Perhaps a cover-up with the nail polish of our better half will make it more personal? I do like the thought of that story, whether it’s true or not. 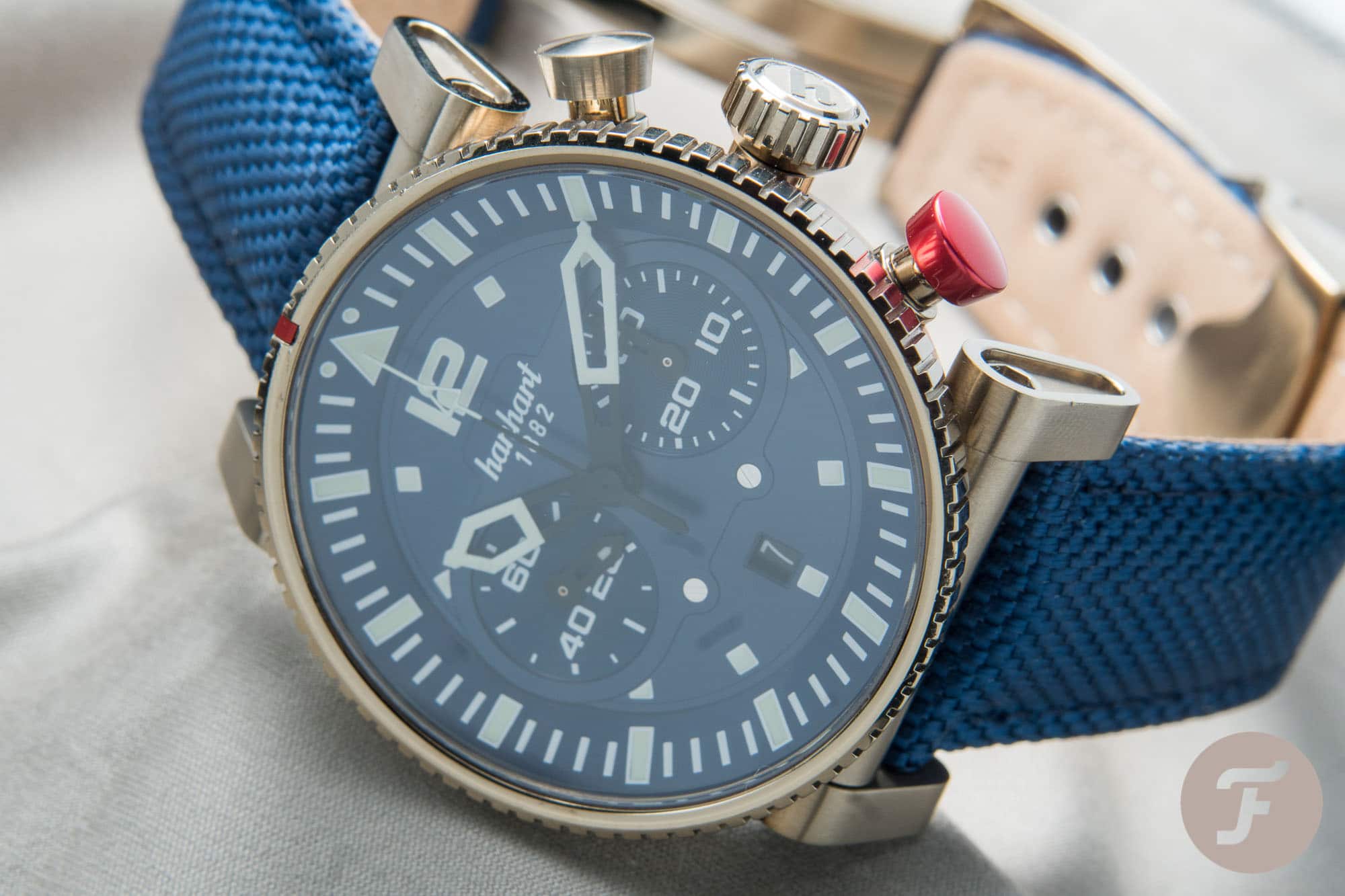 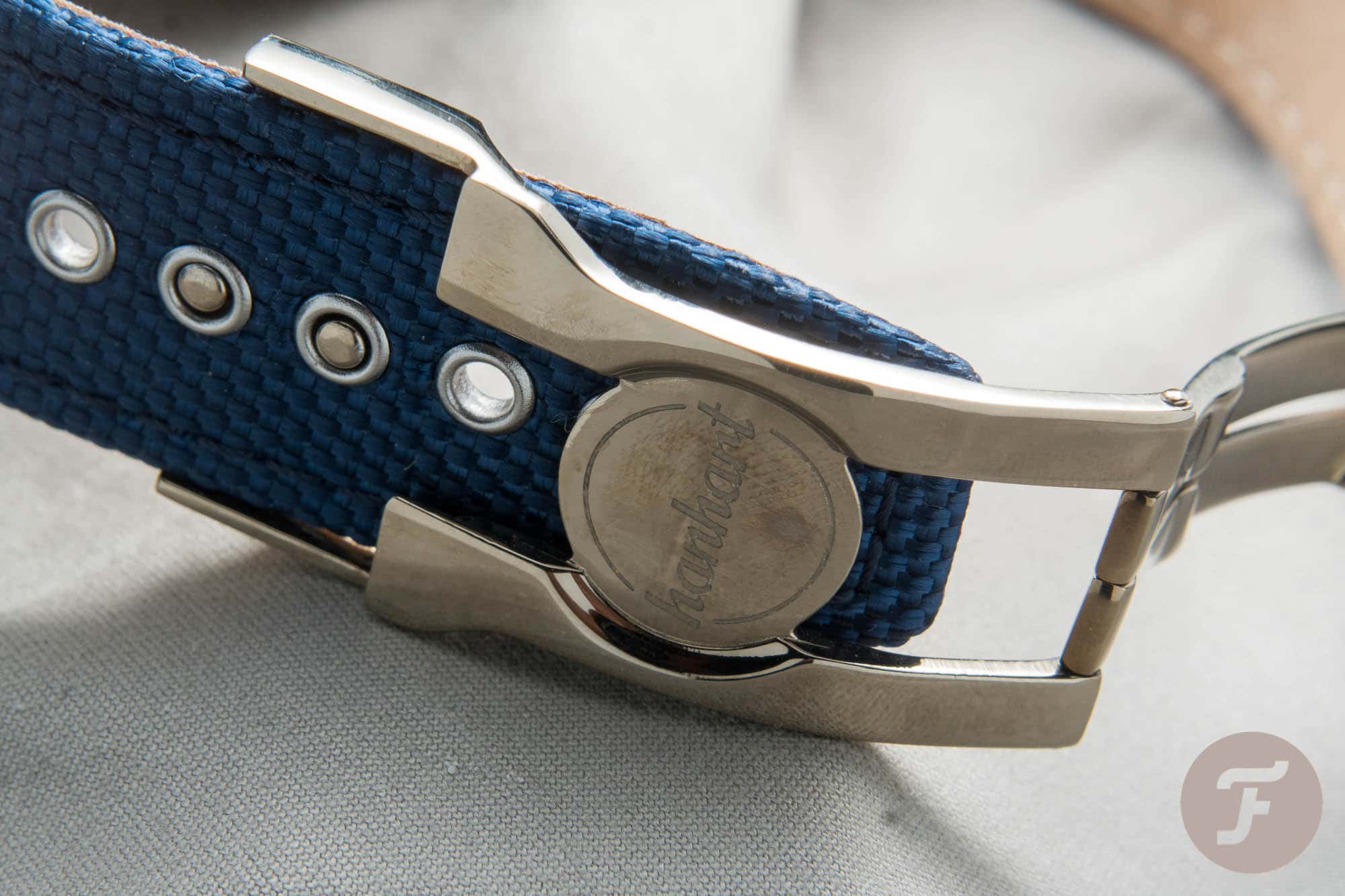 Where I like folding clasps for the ease of use I did notice that you have to be careful. The holes in the textile strap are nicely finished with a rivet. However, this prevents the strap from snapping onto the pins of the folding clasp, and it comes loose rather quickly. Not a big problem but something to be aware of.

For more information about Hanhart head over to the official website.