I admit that I don’t spend a ton of time looking at IWC’s latest offerings. No, I don’t find IWC’s unattractive, but they’re often too large for me. Plus, they’re expensive. But the real reason that my eye rarely finds itself glancing at the current collection is primarily due to the brand’s activities during the late 90’s that spanned until the early 2000’s. This was when the brand was in the throes of its GST – Gold, Steel, Titanium – collection (as well as making some other gems like the Mark XII we reviewed) and that’s where we’ll center our attention today with the IWC Aquatimer 3536. 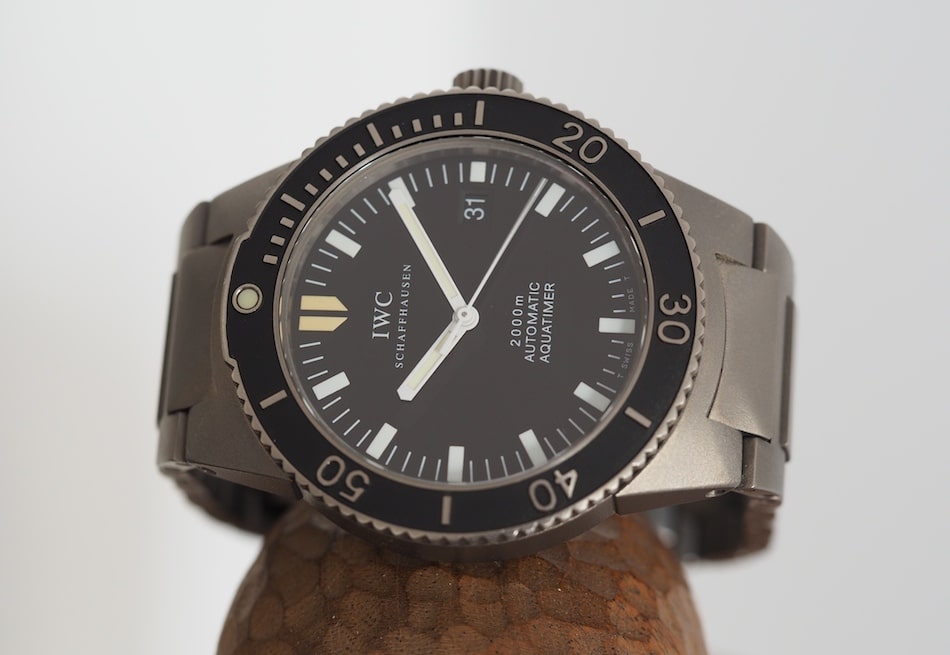 Introduced in roughly 1997, the IWC Aquatimer 3536 was made in three distinct flavors. The -2 variant came with a black dial and featured a stainless steel case and bracelet. The -3 variant was similar, and quite rare, but with a white dial. What you see in front of you is the -1 version that was produced in titanium. There are fans of each for good reason, but to me, the titanium edition is the one to have. It’s essentially a follow up of the Porsche Design Ocean 2000 that IWC debuted in the early 80’s and, to me at least, it epitomizes the stark, technical look that was often associated with the brand during this period. 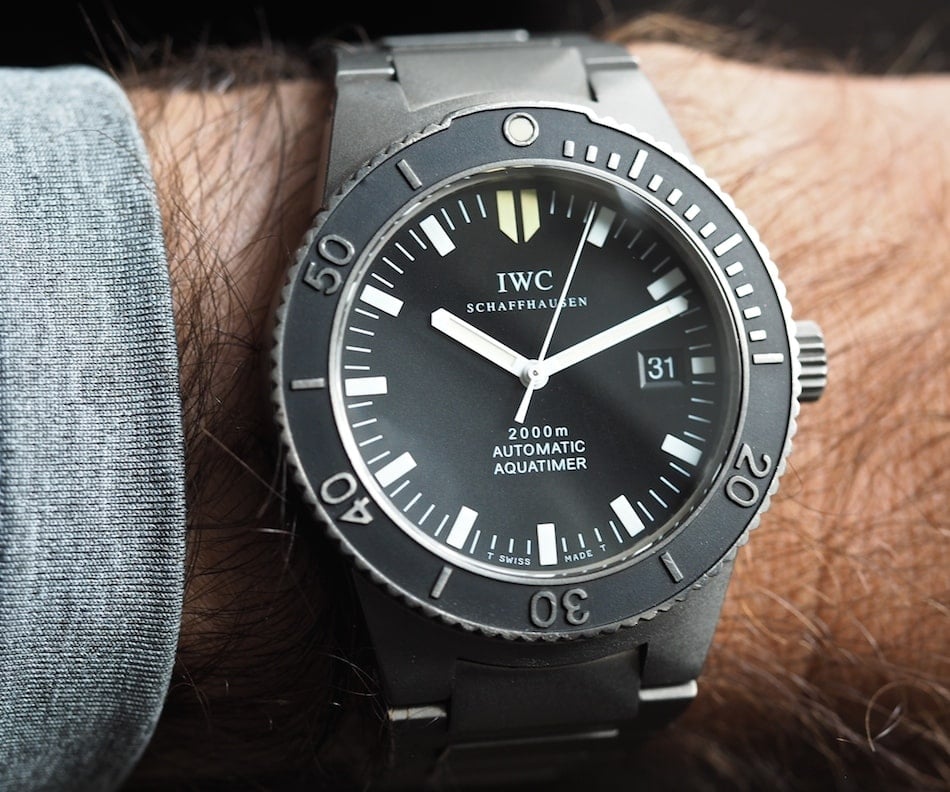 At 42mm in diameter and with a thickness of nearly 14.5mm, the IWC Aquatimer 3536 can’t be characterized as small, but it wears beautifully. Credit part of that to its ridiculously low 120g weight – thanks titanium. So while the watch might not be small, it isn’t fighting the wrist to flop to one side or the other. The slim bracelet is also at work here and feels almost as if nothing is attached to the wearer. And this bracelet, despite a couple serious demerits that we will mention later, is a technical marvel. First off, like the rest of the watch, it’s gorgeously crafted. The outer side of the bracelet, like the watchcase, contains a blasted finish and is hardened to 2400 Vickers. If that latter part means little to you, that’s the same hardness as tungsten carbide – yeah, the drill bits you’d use for piercing masonry. So, there’s little to concern yourself about when it comes to desk diving. 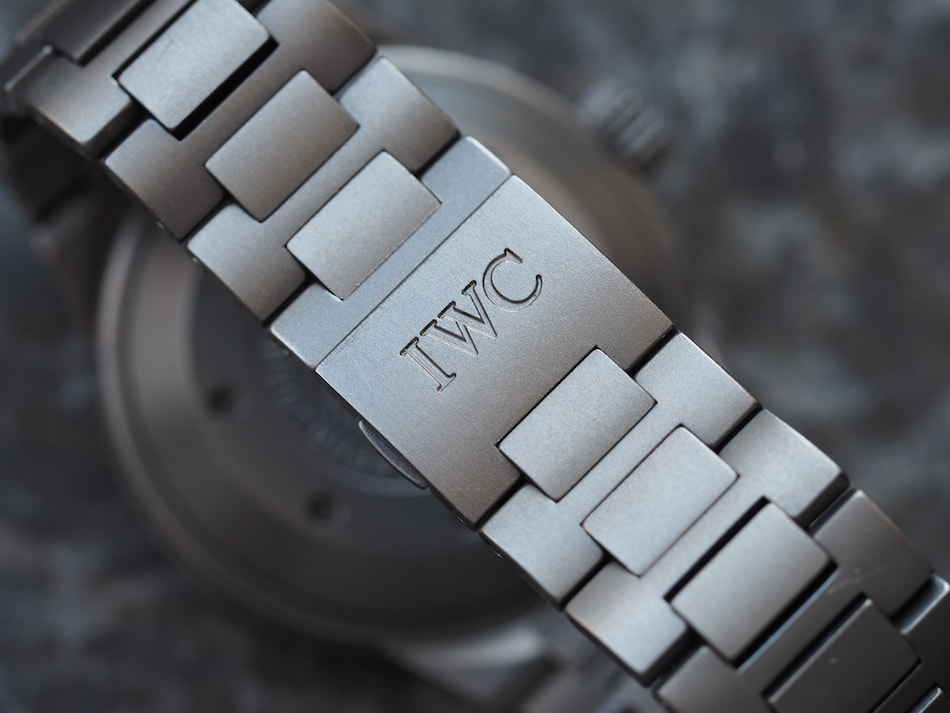 Furthermore, the clasp on the IWC Aquatimer 3536 is incredibly slim and works via a single button on the side that, when opened, exposes a titanium deployant system. Sizing the bracelet is also relatively novel as the Aquatimer borrows a system from Richemont stable mate Cartier. In a nutshell, there is a button on each link that can be depressed (using any tool with a hard tip) and the links can be separated. Again, it’s beautifully crafted, but I must admit they can be become a bit gunked up and hard to work with over time. 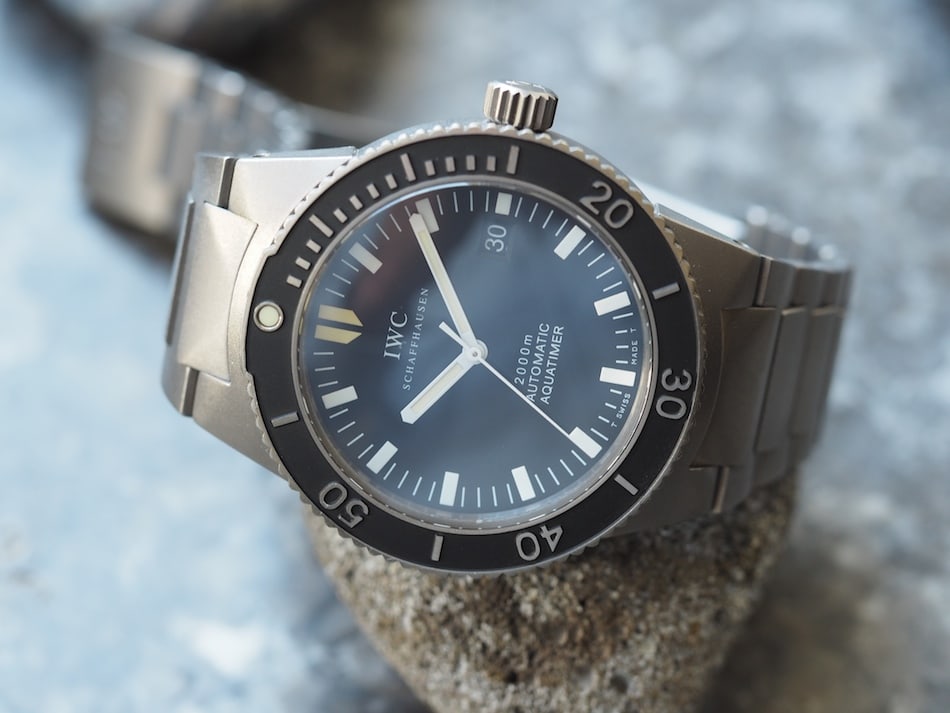 A trait within the IWC Aquatimer 3536 that I’ve purposely failed to mention until now is the fact that it’s rated to 2000 meters in the water resistance department. It’s suitable for saturation diving; yet IWC was able to craft this relatively simple looking watch without the need for a helium valve. The lack of this valve is appreciated as I think it would have detracted from the straightforward, no-nonsense aesthetic. As an aside, I do like to think about the fact that IWC brought some serious tool watch chops to the game at this time – well, even back in the 80’s with the Porsche Design watches – alongside incredible design restraint. That last part is something I’d like to see more of from the brand today. 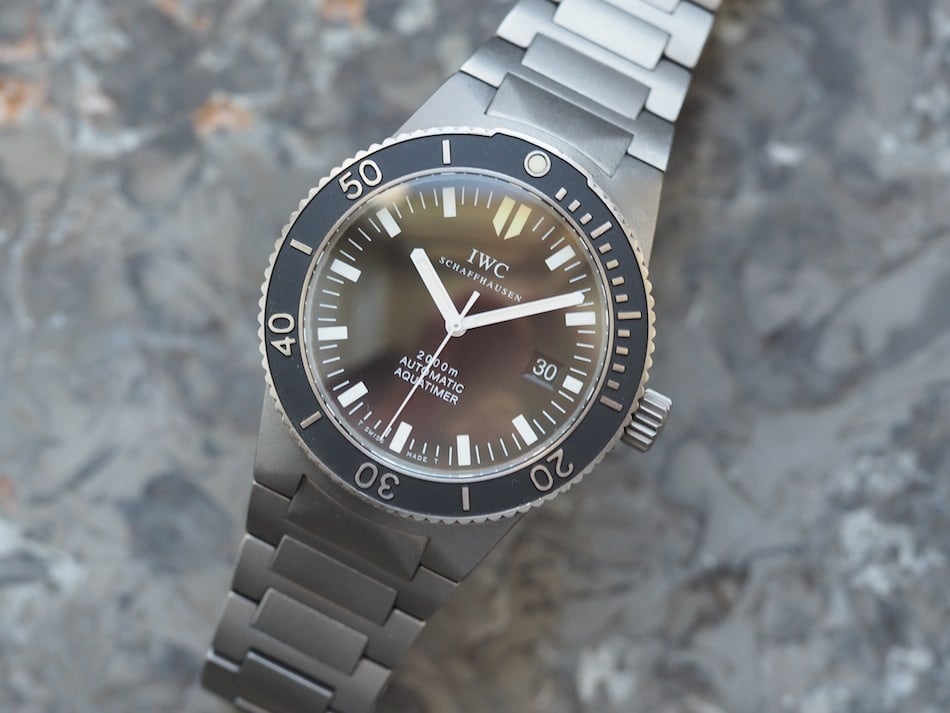 We’ve not covered the looks of the IWC Aquatimer 3536 and it is important to spend some time there because this watch is an absolute classic. It’s incredibly simple while exuding a strong sense of functionality. What I like best about it, though, is for what it isn’t. At a time when so many brands were openly aping Rolex, the Aquatimer is significantly unique with its approach. It foregoes the use of shiny applied indices and opts, instead, for printed luminescent sticks, while maintaining an upscale and expensive look. The background is matte black and the hands are white with lume inside. 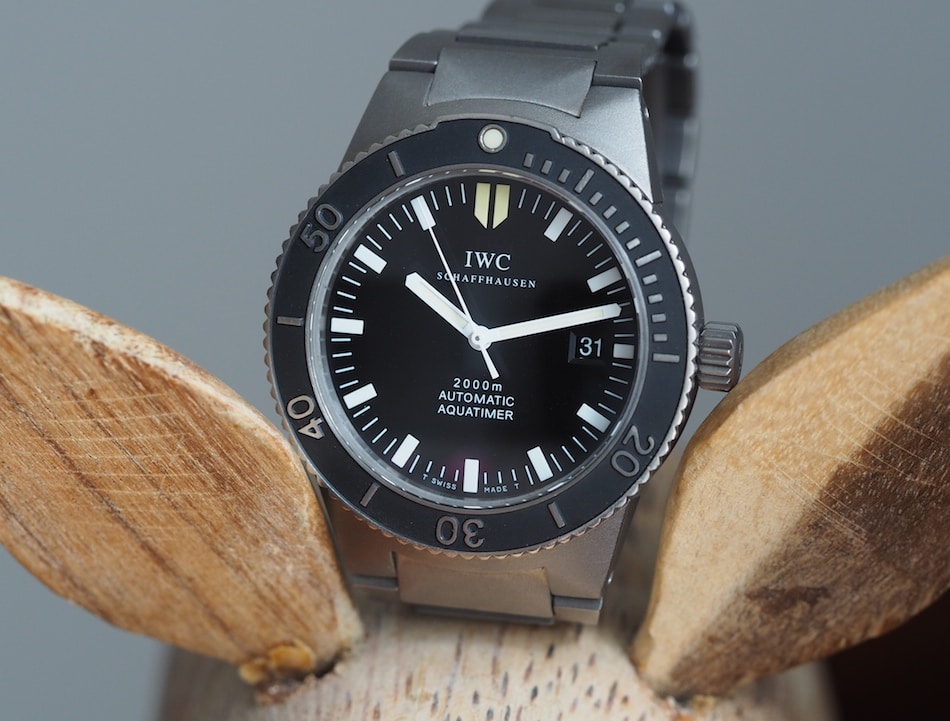 The lume on the dial of the IWC Aquatimer 3536, interestingly, is a mix of luminova and tritium. IWC apparently chose this to provide a difference in color between the two – perhaps luminova was only offered in one hue at the time. You can easily see the tritium at 12:00 as it has aged yellow. It’s good to note that IWC changed to all luminova somewhere after the turn of the millennium and one can tell because the bottom of the dial only states “Swiss Made”. 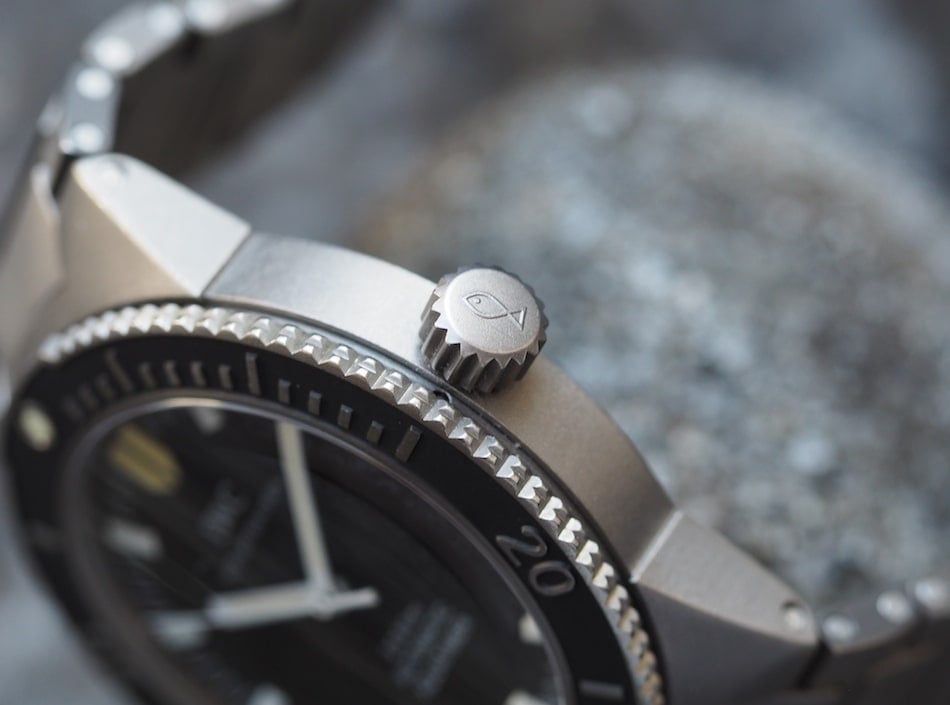 The bezel on the IWC Aquatimer 3536 eschews any type of insert for black oxidation instead with its numbers in crystal clear relief. The side of this bezel features a dual track ridged design that looks like it exited a high cost machine shop. It’s extremely tactile and if sand or grit enters, the entire piece can be removed and cleaned by removing a couple very small flat head screws. In order to use the bezel, it must be pushed down – it’s spring loaded vertically – and turned counterclockwise. The crown is adorned with the then-typical IWC and JLC fish to denote that the watch is safe for the water. The crown is large, easy to use and does without any bulky guards. Again, this watch screams expensive simplicity. 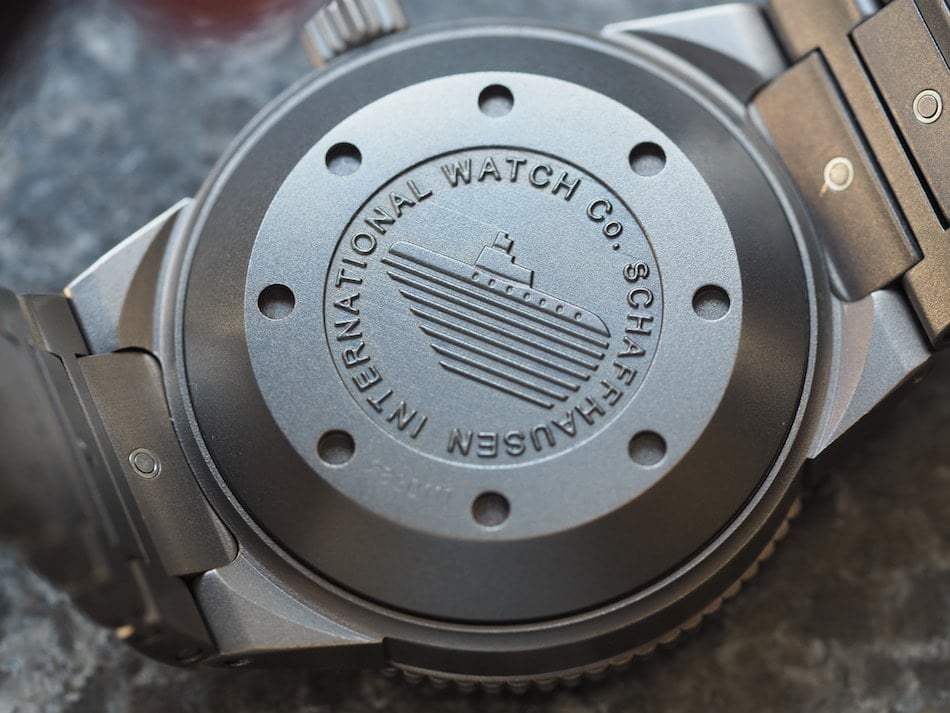 Flipping the watch over shows the sole example of semi-expressive emotion found on the IWC Aquatimer 3536. A U-boat is embossed on the back inside of a circle. Surrounding this circle are 8 circular depressions for use with a case opener. Underneath this sits the IWC 37524 caliber, a highly modified ETA 2892. I’ve not opened this one, but reading about the movement tells us that IWC replaced almost everything with its own parts and gave the automatic a 21K gold rotor. It’s adjusted to five positions. I find it incredibly smooth to wind. In fact, it’s so smooth that I need to bring the watch to my ear while winding as I cannot feel the gears turning. It runs at 28,800 bph, hacks and contains a quick set date. 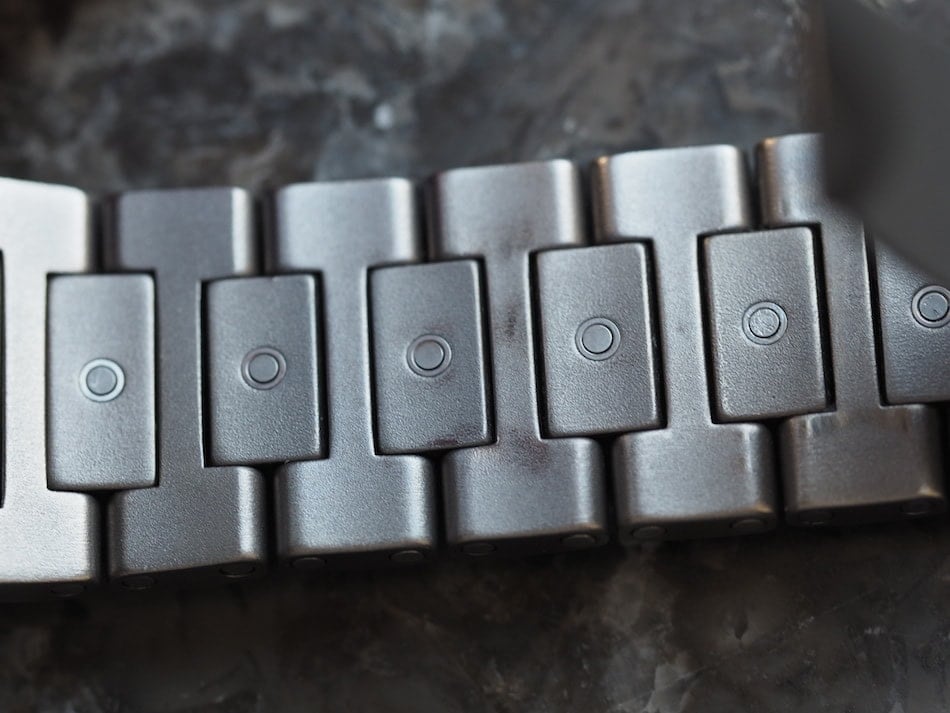 Are there any concerns with the IWC Aquatimer 3536? For sure there are and the 2 biggest quibbles relate to the bracelet. First, the clasp system may be wonderfully slim and comfortable, but it lacks any sort of safety catch, which strikes me as a choice in favor of design versus intended need. 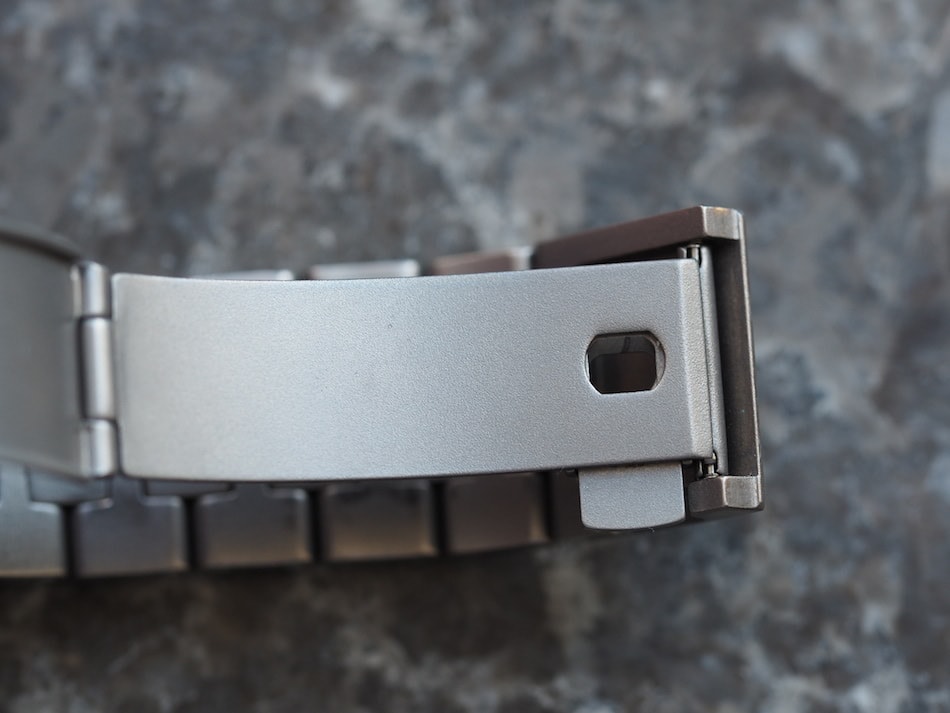 Second, the bracelet on the IWC Aquatimer 3536 contains nothing in the way of microadjustments or a wetsuit extension for that matter. And finally, the lugs are extremely narrow and the bracelet attaches via the aforementioned proprietary system. So, you can forget hooking the IWC up to a bespoke strap. Now, defenders would tell you that IWC sold a Velcro dive strap precisely to deal with most of the issues I mentioned, but I find this annoying and it’s the one flaw in the Aquatimer’s ultra strong attempt at no-bs tool watch design.   I also find the use of an ETA movement slightly weak no matter how much it’s been modified. This was an extremely expensive watch when new and it definitely rivaled or bested the Submariner on the pricing front. It’s not a deal breaker, but if in-house prestige is important, this is lacking to some degree. 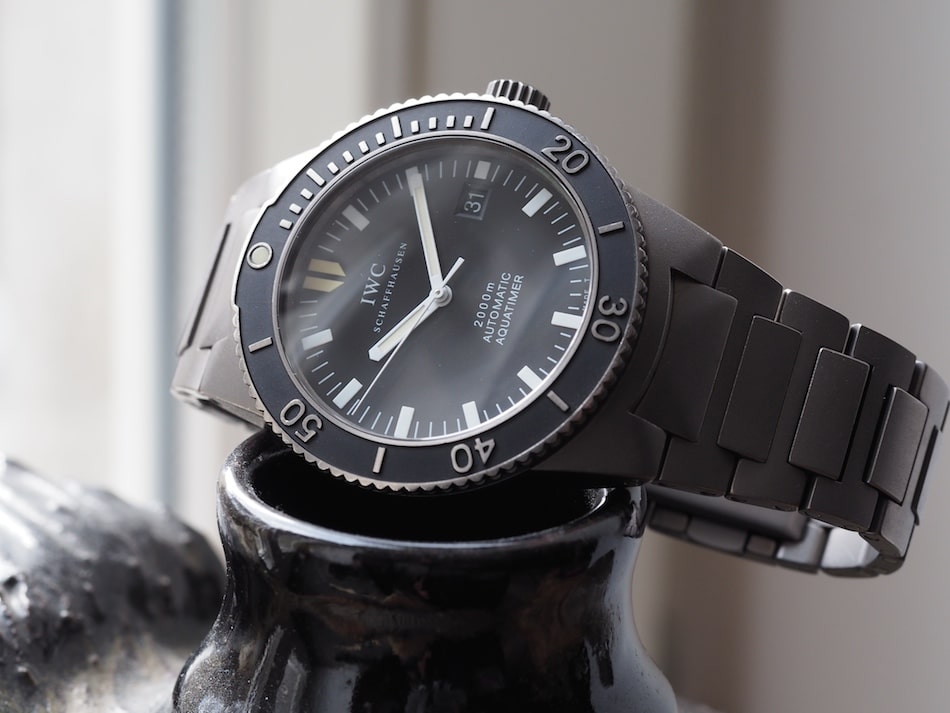 On the collector’s front, the IWC Aquatimer 3536 is seen as highly desirable despite the fact that watches from this era often go unmentioned. It’s hard to ignore the build quality and design and, therefore, the Aquatimer boasts legions of fans. In fact, the GST series is popular in general and the Aquatimer sits near the top of this grouping. At any given time, there are probably a handful of these on a site like Chrono24 or Watchrecon and you see prices anywhere from 4,000 to 5,000 Euros. The majority are always the titanium variants, as it seems that the stainless models were produced in lower numbers. While 4-5K isn’t cheap by any means, the owner is getting a watch that has aged extremely well in my view. Plus, the watches are new enough that many come with all the boxes and papers (mine did as well). 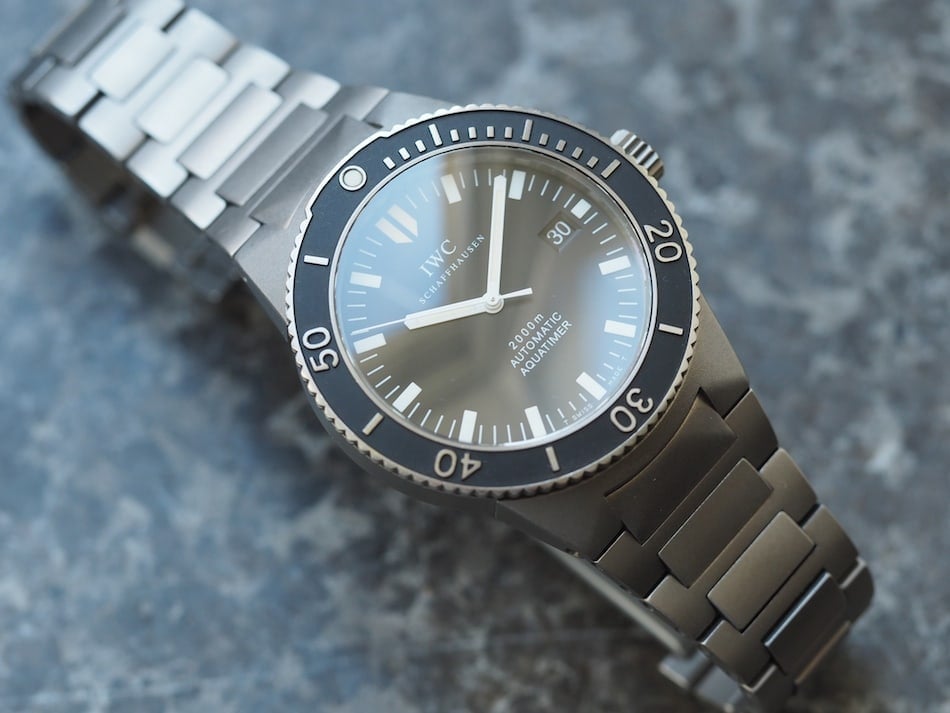 There’s no doubt that IWC still makes some impressive and capable watches, but I find it amazing that spec and design-wise, the IWC Aquatimer 3536 still holds its own against anything that the brand has introduced to replace it during the last 15 or so years. The Aquatimer could be seen as a testament to the over-engineered period that IWC was beginning to exit – some blame the fact that these GST watches were the last models designed prior to the Richemont takeover – and that makes them somewhat special. To me, I simply see the 3536 as a fantastic looking watch that I’d likely be interested in today if it were made and I’d actually cross-shop it versus a Sea Dweller or Submariner. That makes it worth a look in my book.

Hot Topics
Introducing: The Omega Speedmaster Super Racing With Spirate System
151 comments
Design Vs. Specs — Which Is More Important To You When Buying A Watch?
85 comments
The Updated Bracelet For The Omega Speedmaster Professional 3861 — Here Is What’s New!
53 comments
The Time To Buy Is Now: How The Current Economic Climate Influences Watch Buying And How You Should React
49 comments
Introducing: The New Cartier Tank Française
49 comments
Popular
A Question From A Reader: “Which Modern Speedmaster Is Closest To The Original Moonwatch?”
Robert-Jan Broer
14
Grand Seiko SBGA211 ‘Snowflake’ And Why I Didn’t Buy It
Robert-Jan Broer
23
Two Patek Philippe Nautilus Watches: 3700/1A Versus 5711/1A
Robert-Jan Broer
16