2016 marks the 60th anniversary of the automatic Jaeger-LeCoultre Master Memovox. Reason to celebrate with the Master Memovox Boutique Edition, limited to 500 pieces only. These 500 pieces have a blue ‘rich’ dial with beautiful thick applied hour markers, inspired by their 1970s Memovox watches. 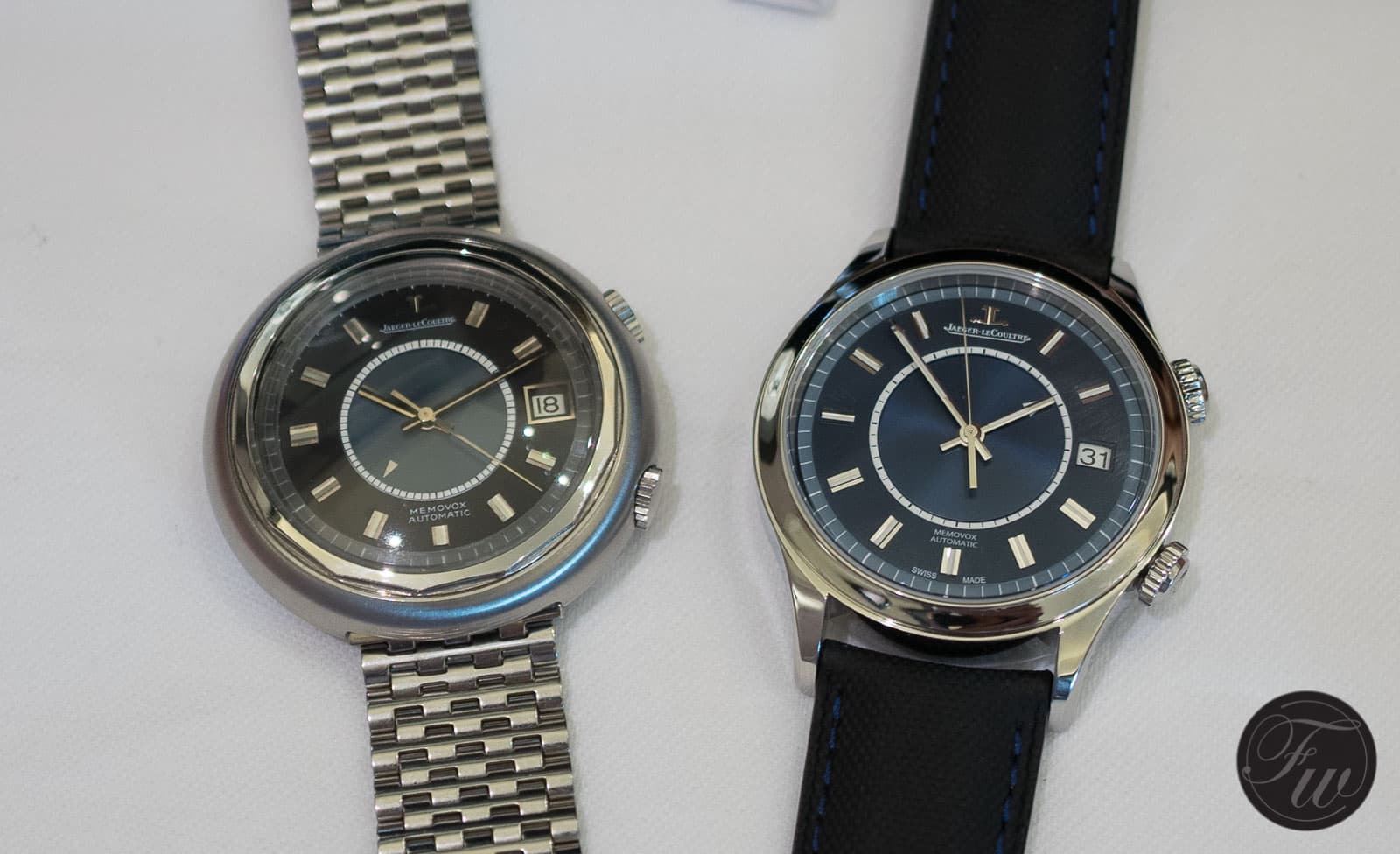 In 1956, JLC used the self-winding caliber 815 to power the Memovox watches of that time. This new Jaeger-LeCoultre Master Memovox Boutique Edition is equipped with JLC caliber 956, a direct descendent of the original caliber 815. This movement requires two crows, as you can see. One to set and correct time, the other crown to wind the spring that powers the alarm function, and of course to set the alarm (in the second position). Turn the crown the other way, and you will be able to set the date, located at 3 o’clock. JLC caliber 956 movement is decorated by hand, yet invisible for the wearer. The caseback of the watch is stainless steel and has beautiful engravings, but it doesn’t reveal the movement. The movement consists of 268 parts, has a power reserve of 45 hours and ticks at 28,800 vph. 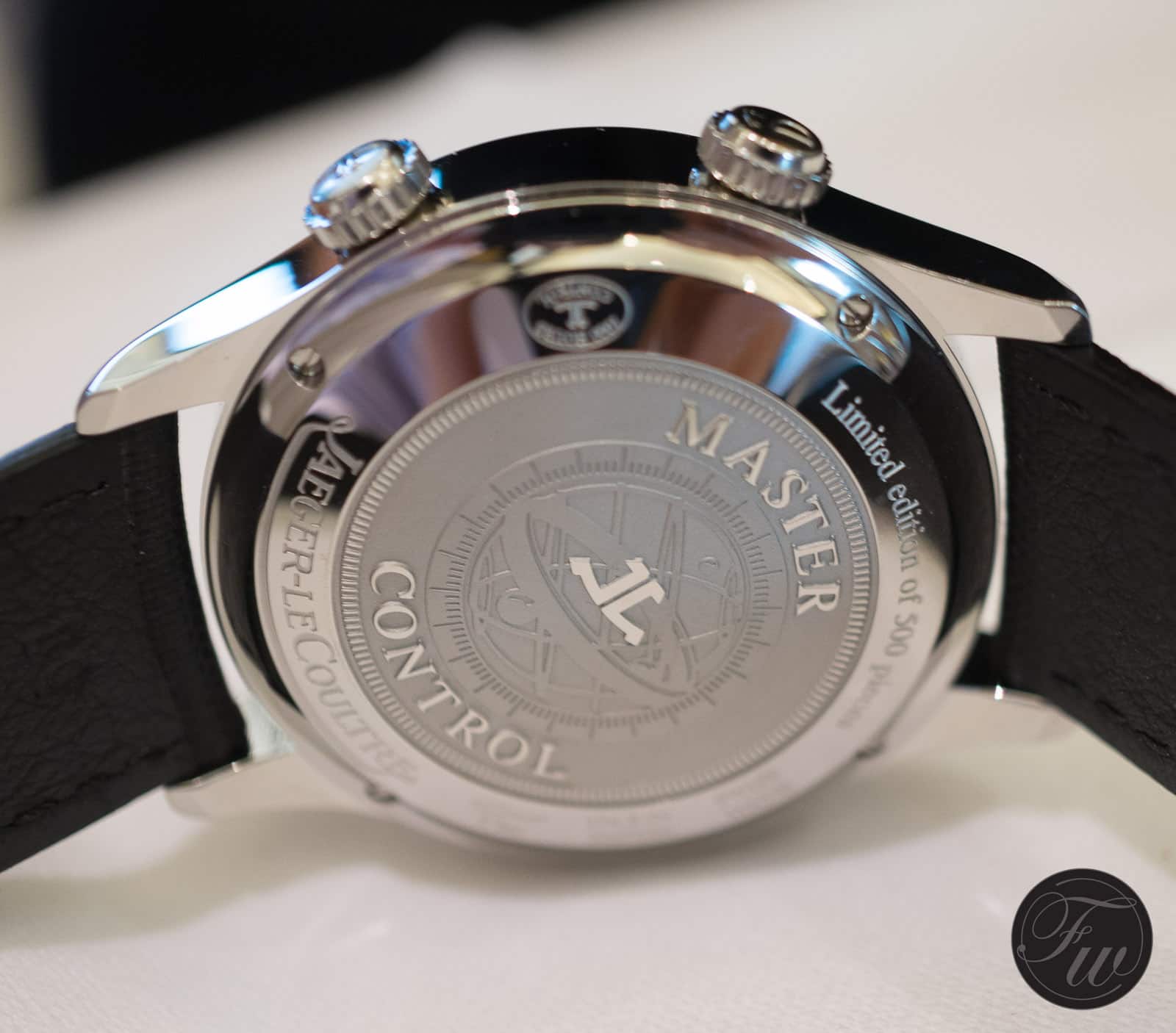 As written above, the Master Memovox Boutique Edition is limited to 500 pieces only. Which doesn’t seem to be much, so it will be an exclusive Jaeger-LeCoultre watch. As the name suggests, the Boutique Edition will be only available in one of their approximately 90 Jaeger-LeCoultre boutiques world wide. I would even say it is a bit of a pity that it is limited to 500 pieces only, or limited to boutiques only. It is a very attractive version of the Memovox, that will probably attract a younger clientele than the regular version of the watch. 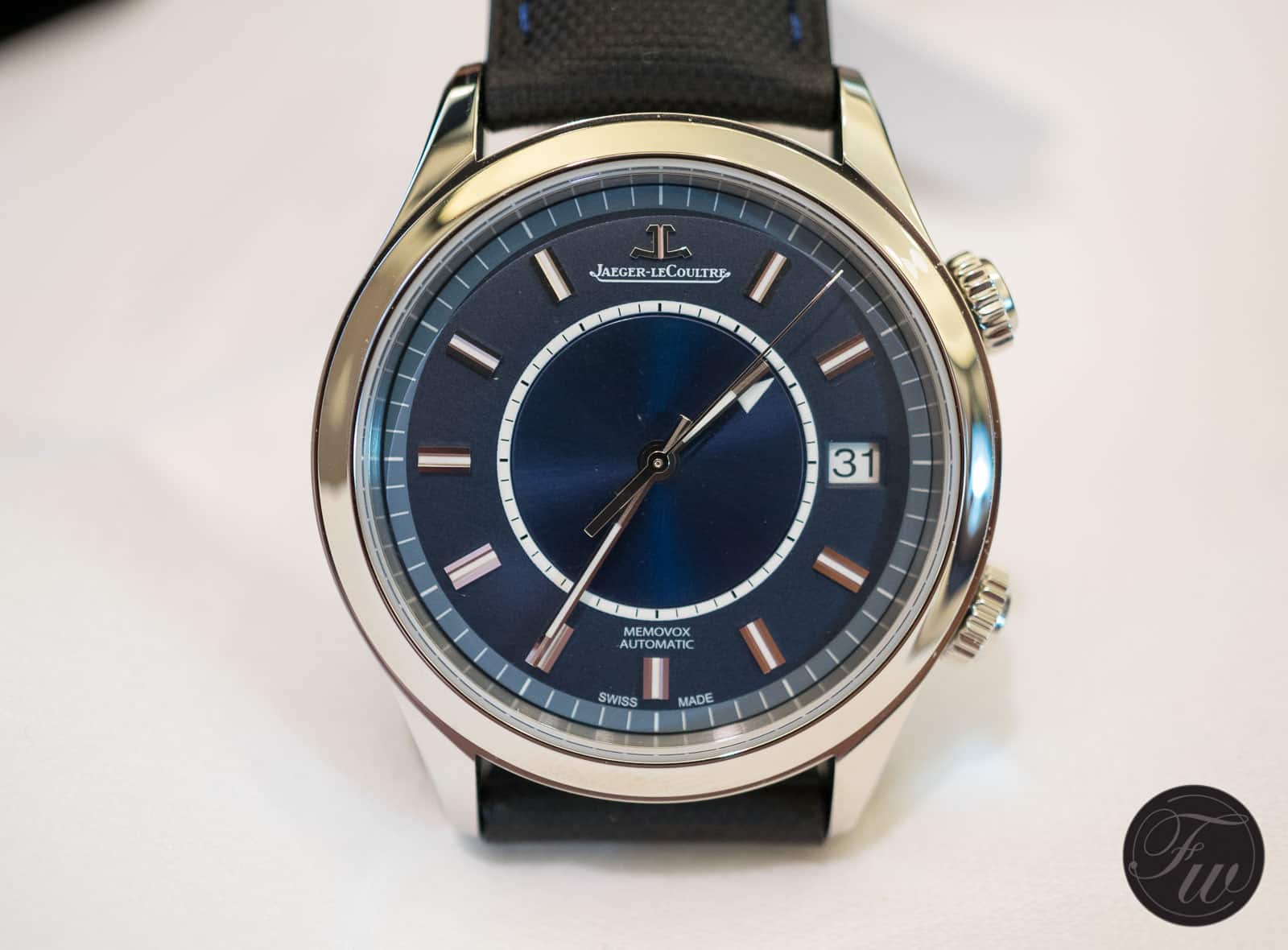 I was able to try the regular Jaeger-LeCoultre Master Memovox reference 1418430 for a while (more soon), and the main difference is the dial. Where the normal version (click here), has a silvered Sunray brushed dial and silver colored dauphin hands, this boutique edition has a beautiful blue dial. Inspired by the 1970s Snowdrop model, as pictured below. 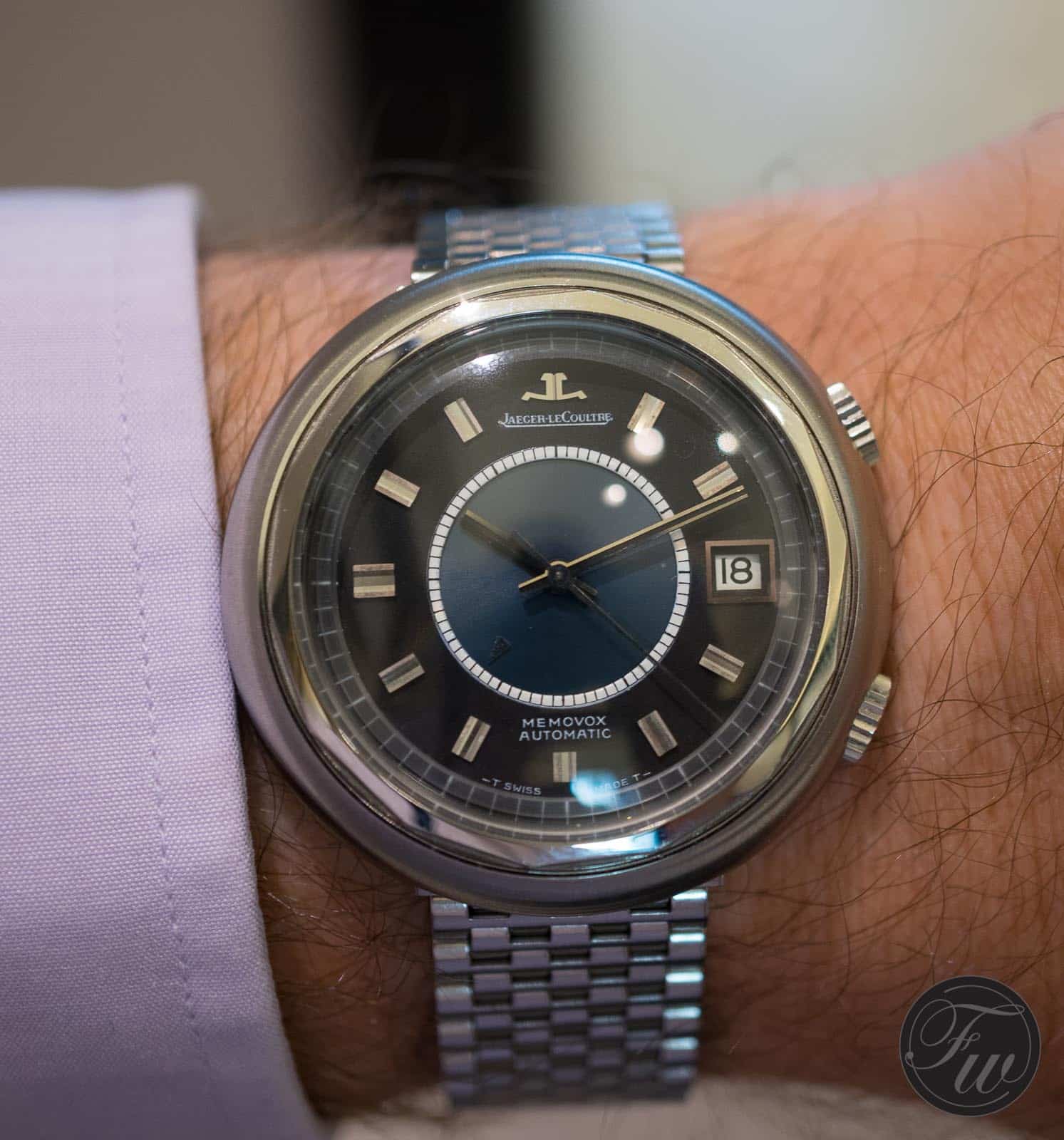 The Jaeger-LeCoultre Master Memovox Boutique Edition has the same dial lay-out. Two tones of blue, with an outer minute ring and centre ‘Memovox’ dial in the same light blue color, and a dark blue tone with the applied hour markers, date aperture and Jaeger-LeCoultre logo. Instead of the dauphin hands of the regular version, Jaeger-LeCoultre decided to go with the wide 1970s set of hands, as used on the original Snowdrop model. 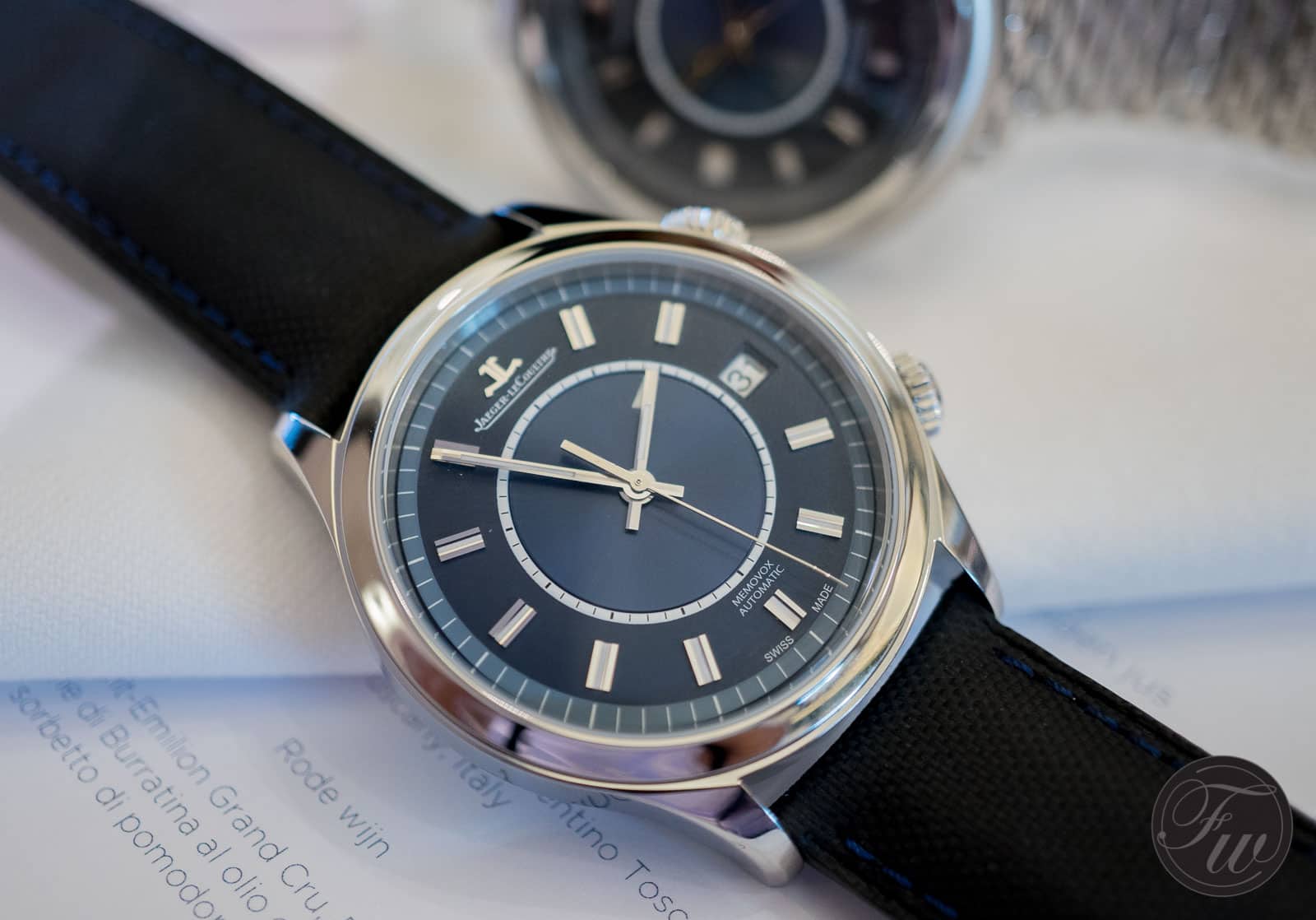 One of the other things that it is different about this Boutique Edition compared to the regular version, is the strap. This blue dialed version comes with a calfskin strap in Trieste black with blue topstitching. A very comfortable and sporty strap, compared to the somewhat stiff alligator strap of the normal reference, as I experience it.

Some Thoughts, Price And Availability

This 40mm Jaeger-LeCoultre Master Memovox Boutique Edition is by no means a small watch. Not due to the diameter, but mainly due to the thick case (14.06mm). Personally, I find the case to be a bit too thick. Not as refined as it could have been done. As I was told, the case is not necessarily this thick due to the alarm function, but merely by design.

Commercially, it is probably very wise to create a limited edition (of 500 pieces). These watches aren’t numbered though, but – like many Richemont watches seem to use – it only mentions it is limited to 500 pieces. I’ve been told that this is done to prevent people from being turned away because their favorite number wasn’t available. In the worst case scenario, it is done to create more (but probably) less editions of a watch. But let’s assume that it is done to prevent people from being disappointed.

The retail price of the Jaeger-LeCoultre Master Memovox Boutique Edition is €10.900 ,-, including taxes. The regular version is €9.600,-, with an alligator strap. The difference of €1300,- is something that can mainly be allocated to the dial. I am not exactly sure, where this €1300,- comes from. It seems a bit too much for the difference in dials alone, but perhaps it is the premium that needs to be paid for a limited edition. Fact is that I do like this Boutique Edition quite a lot, I prefer it over the regular version to be honest. The dial makes this watch a bit more versatile and also suited for more ‘casual’ wear.