Seiko has been showering us with new releases over the last couple of months. One thing we have noticed is that Seiko enthusiasts have been quite vocal about their favorite brand becoming increasingly more expensive. But the huge volume of releases means there is still plenty for every budget. Those comments inspired us to compile a Top-5 of Seiko watches that are currently available for under 500 Euros.

Price discussions are nothing new. Admittedly, price discussions for Seiko are a bit different. That’s because the brand is the gateway into the world of mechanical watches for so many of us. And it would be a shame to see it give up that revered position.

Overall, the price increases haven’t hurt Seiko’s popularity one bit. But does it mean that the brand is starting to move away from that coveted entry-level position it has occupied for so long? I had a look into the brand’s most affordable options to see if I could come up with a Top-5 of Seiko watches under 500 Euros. 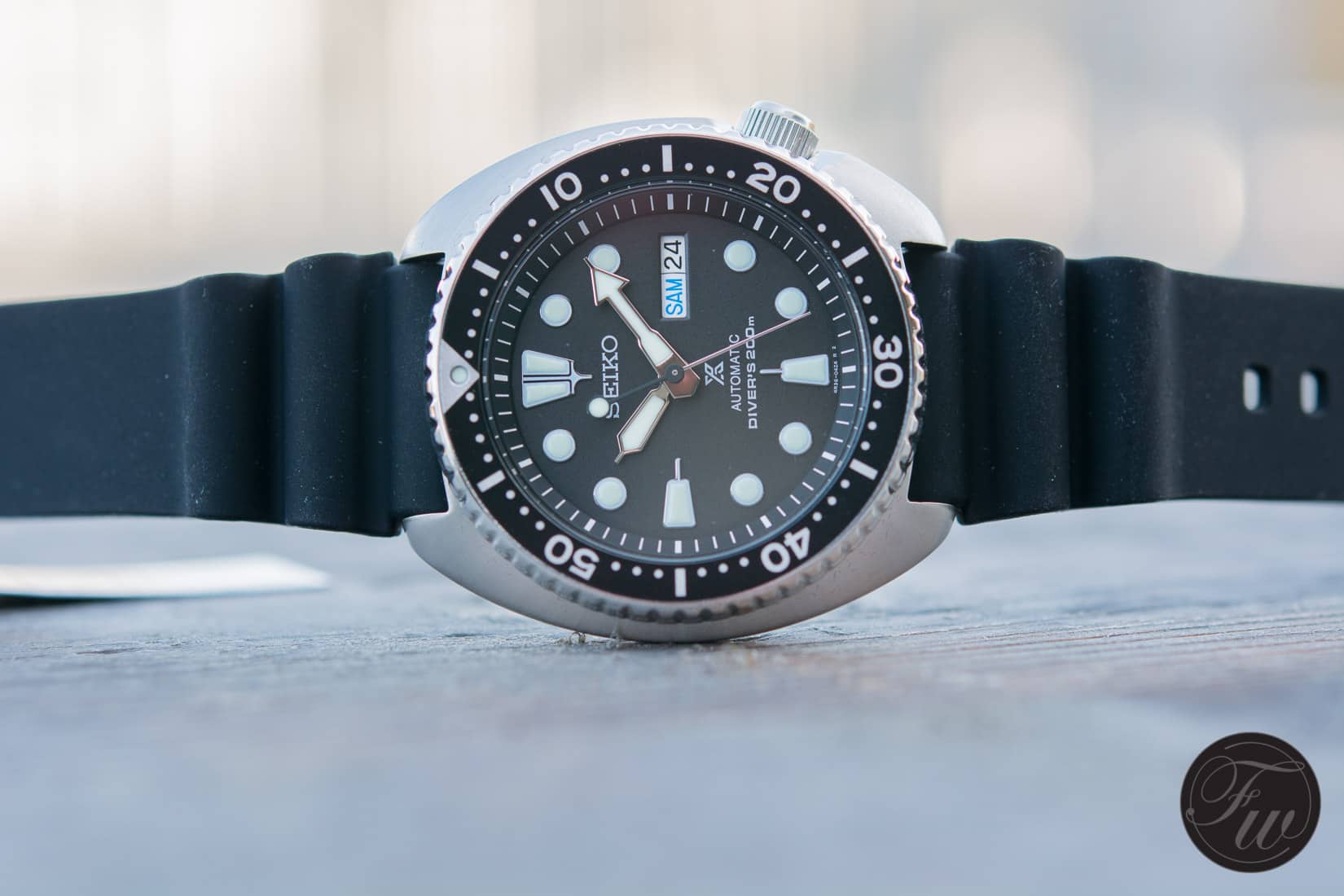 The first pick was a simple one. This list would not be complete without the iconic Turtle. The Seiko Prospex SRP777K1, as it is officially named, is the black version of the incredibly popular Turtle. If the black version is not your thing, there is a variety of colors available for this classic. At a retail price of €450, this is probably the best your money can buy under 500 Euros.

It was especially interesting to see how deep the love for the Turtle goes for all of our readers.

Here at Fratello, we have covered the Turtle quite a few times. But it was especially interesting to see how deep the love for the Turtle goes for all of our readers in one of our Sunday Morning Showdown articles earlier this year. In what only can be described as a glorious win for the Turtle, a staggering 86% of you voted in favor of the SRP777K1. It is in our Top-3 of most glorious victories in the series.

As Balazs explained in the Showdown: “The Seiko Turtle SRP777 is a watch that fits everyone’s bill [when] looking for a reliable, rugged, everyday sports watch that won’t break the bank.” As an owner of the Turtle PADI edition, I can only say “Amen” to that. 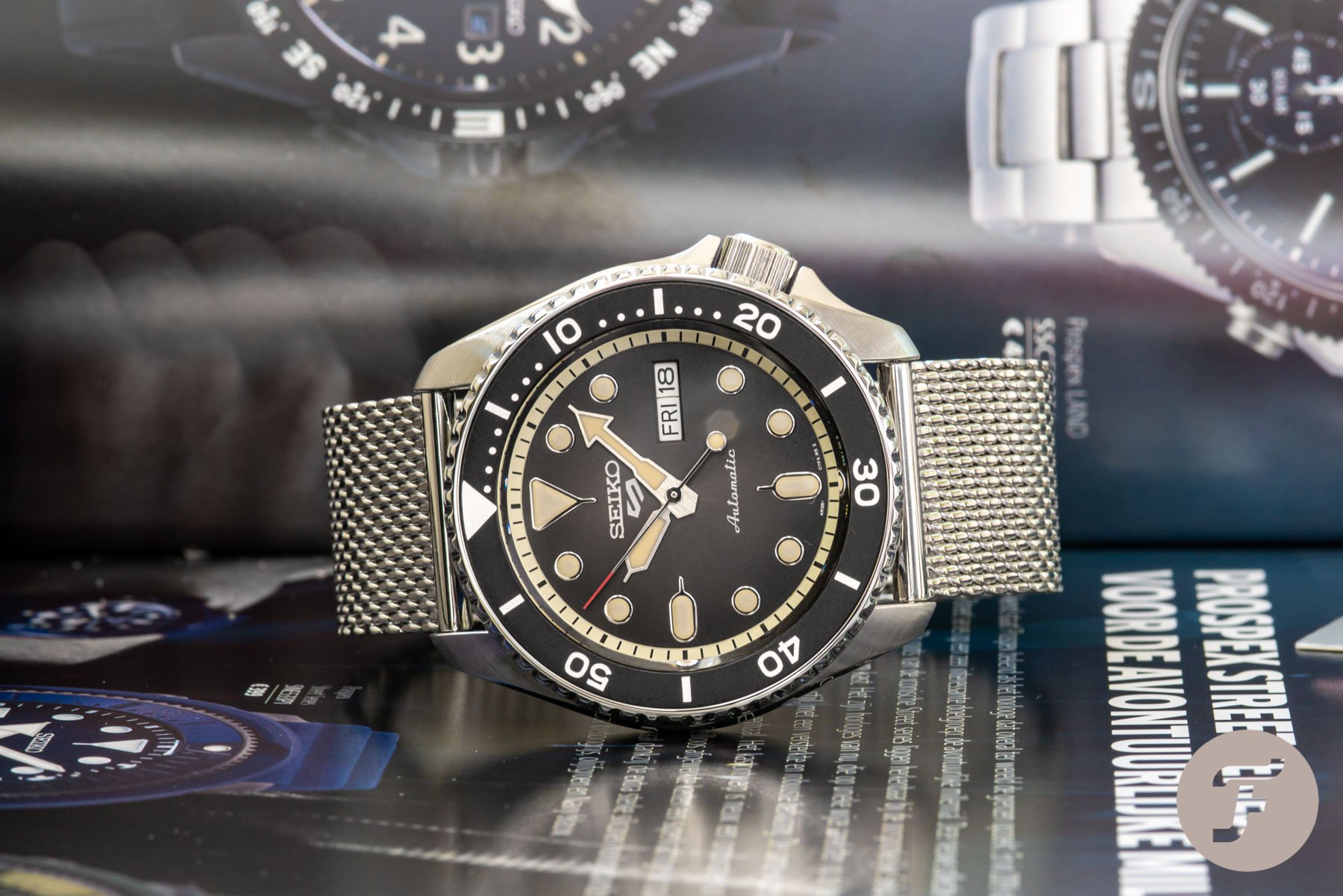 As Gerard and Robert-Jan explained in their extensive video review of the collection, they are not a replacement. To make life easier for people that are searching for a real Seiko diver, Gerard wrote a great article giving an overview of the alternatives for the SKX007.

The combination of the dial and the mesh bracelet makes it stand out immediately.

The one model from the Seiko 5 Sports collection that has stood out from the beginning for pretty much all of us is the SRPD73K1. The combination of the characteristic black dial with a contrasting white inner chapter ring and the mesh bracelet makes it stand out immediately amongst the other references.

And as Mike explained in his article about the SRPD73K1, it’s not just a matter of good looks. “While the newest models may trade away some more hard-core specs, they make up for this with a more modern package, better finishing, and a plethora of color choices.” In that vast array of choices,  the SRPD73K1 quickly takes the first place for me. 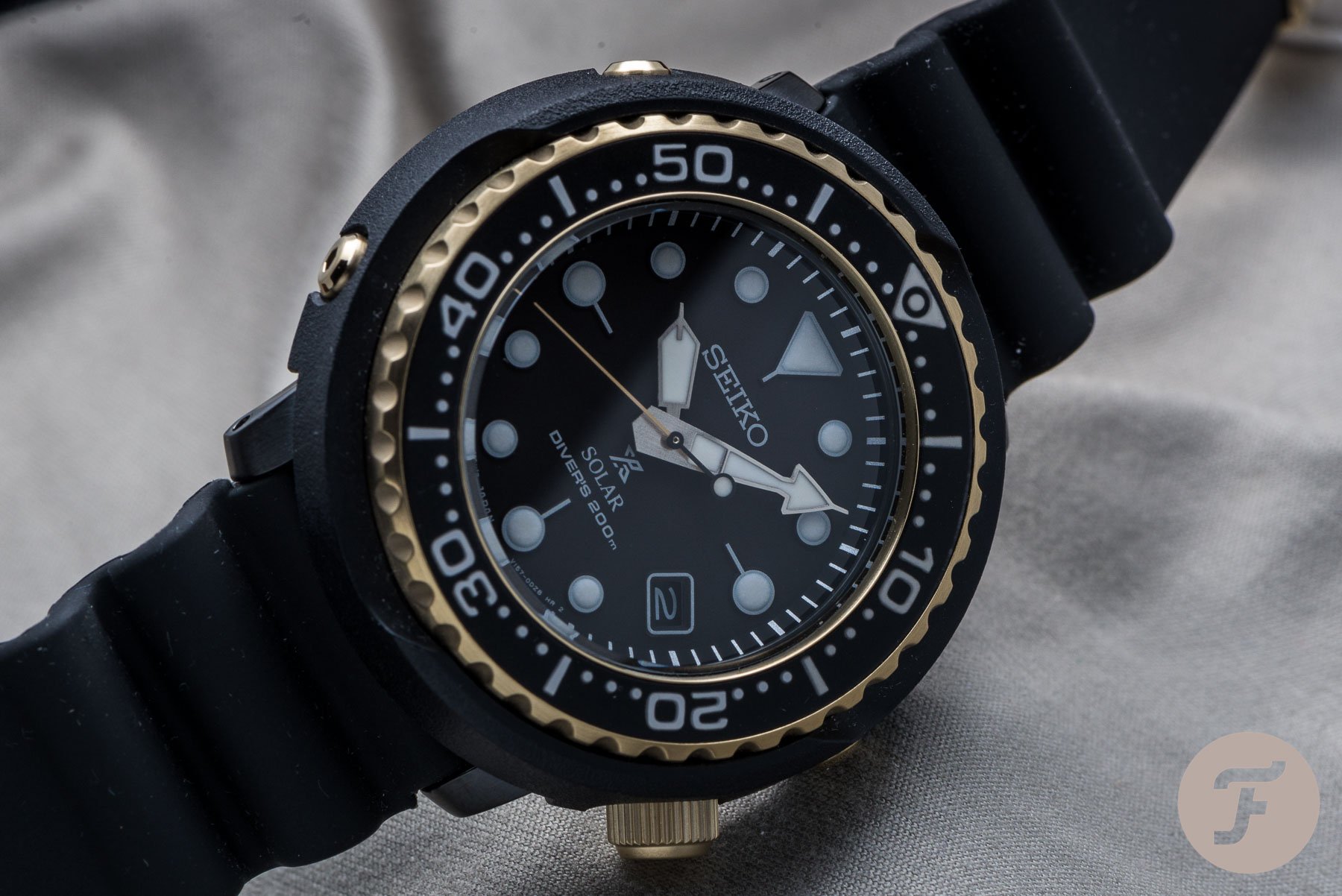 The Seiko Prospex SNE498P1 taps into a significant part of Seiko diver history. The watch was introduced at Baselworld 2018 to celebrate thee 40th birthday of the legendary 7549 Golden Tuna. This SNE498P1 is also known as the Seiko 1978 Quartz Diver’s Modern Re-Interpretation. And sure it’s a solar-powered quartz watch, but it is one with a great deal of history and an even greater helping of coolness.

To get an idea of the rich history of the Seiko Tuna professional divers, Gerard wrote a long piece covering the different generations of Seiko Tuna watches. In it, he explains why the Seiko 7549 from 1978 is nicknamed the Golden Tuna. “To enhance the surface properties of the watch’s inner titanium case, it was coated with Titanium nitride. Titanium nitride (TiN) is an extremely hard ceramic material and has a golden appearance.”

A quartz diver might not always be the first watch you think of when you consider a new Seiko.

The SNE498P1 Tuna is available for €420. For that money, you will get the affordable modern re-interpretation of the 1978 original. And it features that same characteristic black and gold color combo.

A quartz diver might not always be the first watch you think of when you consider a new Seiko. But the SNE498P1 combines great looks and quality with a great deal of history. As Mike explained in his coverage of Seiko at Baselworld 2018: “For me, these solar-powered “Tuna-lites” were quiet hits from Seiko Prospex at Baselworld 2018.” And two years on, they still are. 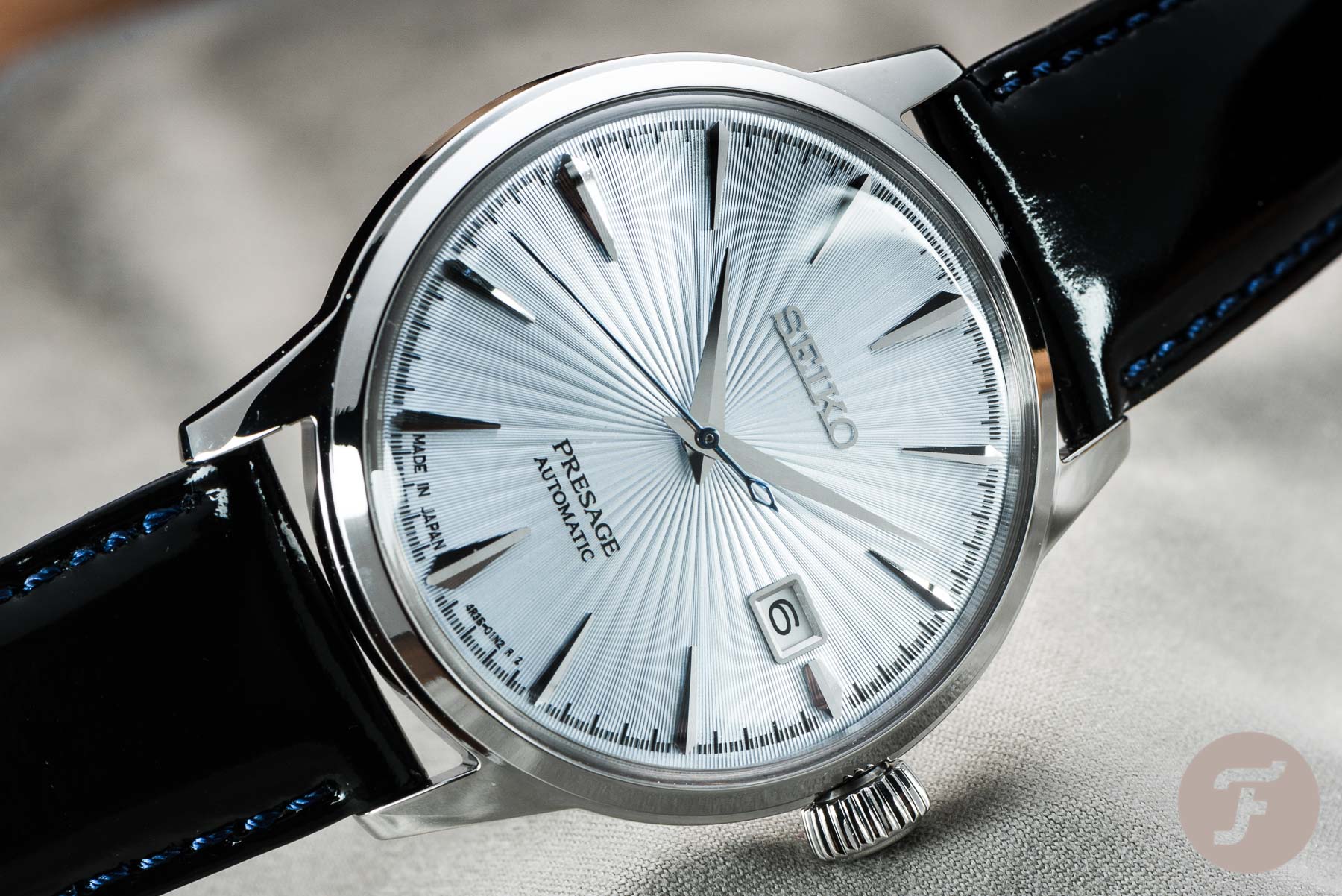 Talk about cool style. The Seiko Presage SRPB43J1 has all the style you could need for a price of €430. Seiko introduced the Cocktail Time series back in 2010 as Japan Domestic Models (JDM) only. The glamour of cocktail bars inspires the watches. It’s a simple but very stylish concept that has worldwide appeal. However, it took until 2017 before Seiko introduced the Cocktail Time watches worldwide.

As the Cocktail Time watches are part of the Presage collection, they feature some of the most spectacular dials available for the money. The SRPB43J1 features a beautiful patterned ice blue sunray dial. Combined with the applied hour markers, the polished dauphin hands, the sleek blue second hand, and the great framed date aperture, it makes for one classy watch.

With a dial like that, there is absolutely no reason to hide the watch under your cuff.

The great looks are combined with a very wearable 40.5mm case size and sleek 11.8mm profile. It makes it easy to fit under your cuff. Not that you need to. With a dial like that, there is absolutely no reason to hide the watch. And if you are not a fan of the shiny leather strap it comes with, the ice blue dial combines excellently with a variety of different straps. As Robert-Jan wrote in his article on the Cocktail Time watches, it is hard to go wrong with the SRPB43J1 as your choice for a dress watch under 500 Euros. The toughest decision is probably to pick your personal favorite out of all the available models. 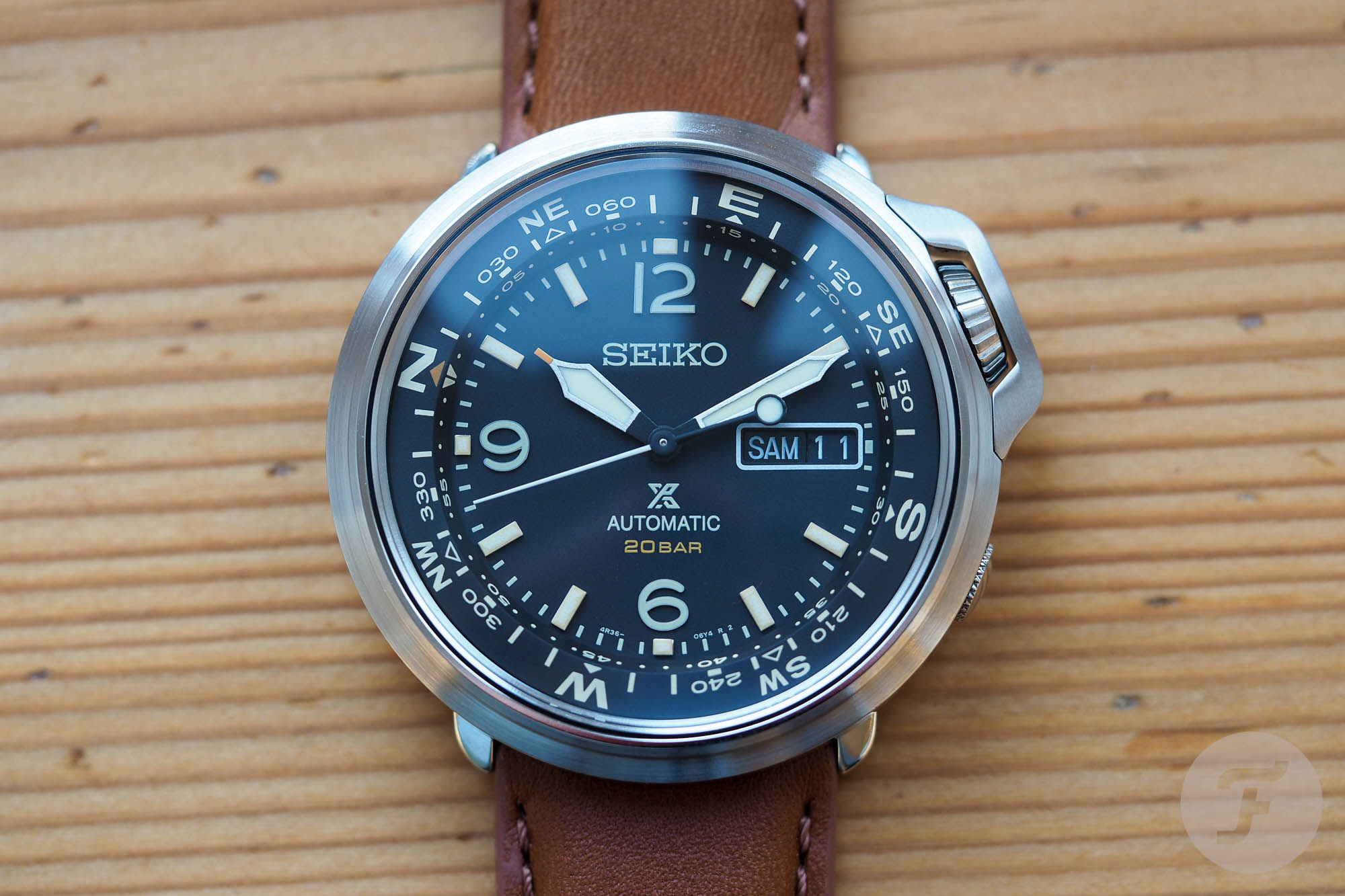 The last watch in this Top-5 is a bit of a curveball. I could have easily picked the Samurai or the Monster. However, with the Turtle and the Tuna, there are two divers on this list I would pick any day of the week above the Samurai and the Monster.

The SRPD31K1 Field Compass was introduced in 2019 and is part of the Prospex Land series. It’s the same series that also features the great Alpinist models. Although they are part of the same overall collection, the Prospex Land models are a big step away from the typical Prospex divers’ aesthetic.

Would it have been just a round-shaped case, it would have been a less exciting design exercise.

In short, it’s a bit of an oddball with its 43mm round case with tiny lugs and crown at 2 o’clock with a crown guard that Mike described in his review of the watch as “a hoop of metal”. But it’s the element that gives the watch its character. Had it been just a round-shaped case, it would have been a less exciting design exercise. Now, it’s an element that defines the watch. One that I like a lot.

The Prospex SRPD31K1 Field Compass features a stainless steel case, black dial, and brown leather strap and is available for €430. There are two other versions (steel case with a green dial, and black steel case with a black dial) with availability depending on where you are. Let’s be honest — this will never be a big seller for Seiko. But it’s got what I look for in a watch. The Field Compass is quirky, cool, and different. And that’s why it’s on this list of Top-5 Seiko watches under 500 Euros.

In all honesty, finding five watches for this Top-5 Seiko watches under 500 Euros was easy. It was making the selection that made it hard. For me, Seiko still has that unique position of offering incredible value for money, especially for its entry-level watches.

And I’m sure there are plenty of readers that have their favorites for this list. Although both are relevant, it’s a discussion that is a lot more fun than the one about increasing prices. So please let us know in the comments what your picks for your Top-5 Seiko watches under 500 Euros would be.