You're in the pilot seat for this one. Chocks away!
Rob Nudds
comments 29
Share

While the Laco brand’s history of supplying the German airforce during World War II is a controversial topic on these pages and others (especially because the brand still engraves the side of its cases with the item code assigned to Pilot’s watches by the Third Reich’s Reichsluftfahrtministerium), many of the luxury brands (and plenty of the humdrum) found themselves on the wrong side of history during those dark days.

You need only mention brands such as BMW, Hugo Boss, Kodak, or IBM to realize that a troubling level of collaboration or at least association existed between the heads of those companies and the Nazi regime. Despite the dark chapters in these companies’ shared history, there all still persist and prosper to this day.

When it comes to watchmaking, the list of Third Reich associates is also disturbingly long, with watches from brands such as IWC, Hanhart, and even Rolex-powered Panerais ending up on the wrists of Axis servicemen. How complicit each individual company was in those exchanges is often hard to pin down for sure, but the facts remain that these watches were used to advance a horrendous global conflict. I’m opening this article with these rather sobering statements because to skirt past it would do more harm than good, in my opinion. There’s no point sticking one’s head in the sand when it comes to these brands’ past. It would be irresponsible to gloss over that fact too, considering our duty is to inform our readers of what it is they might be considering spending their hard-earned cash on. 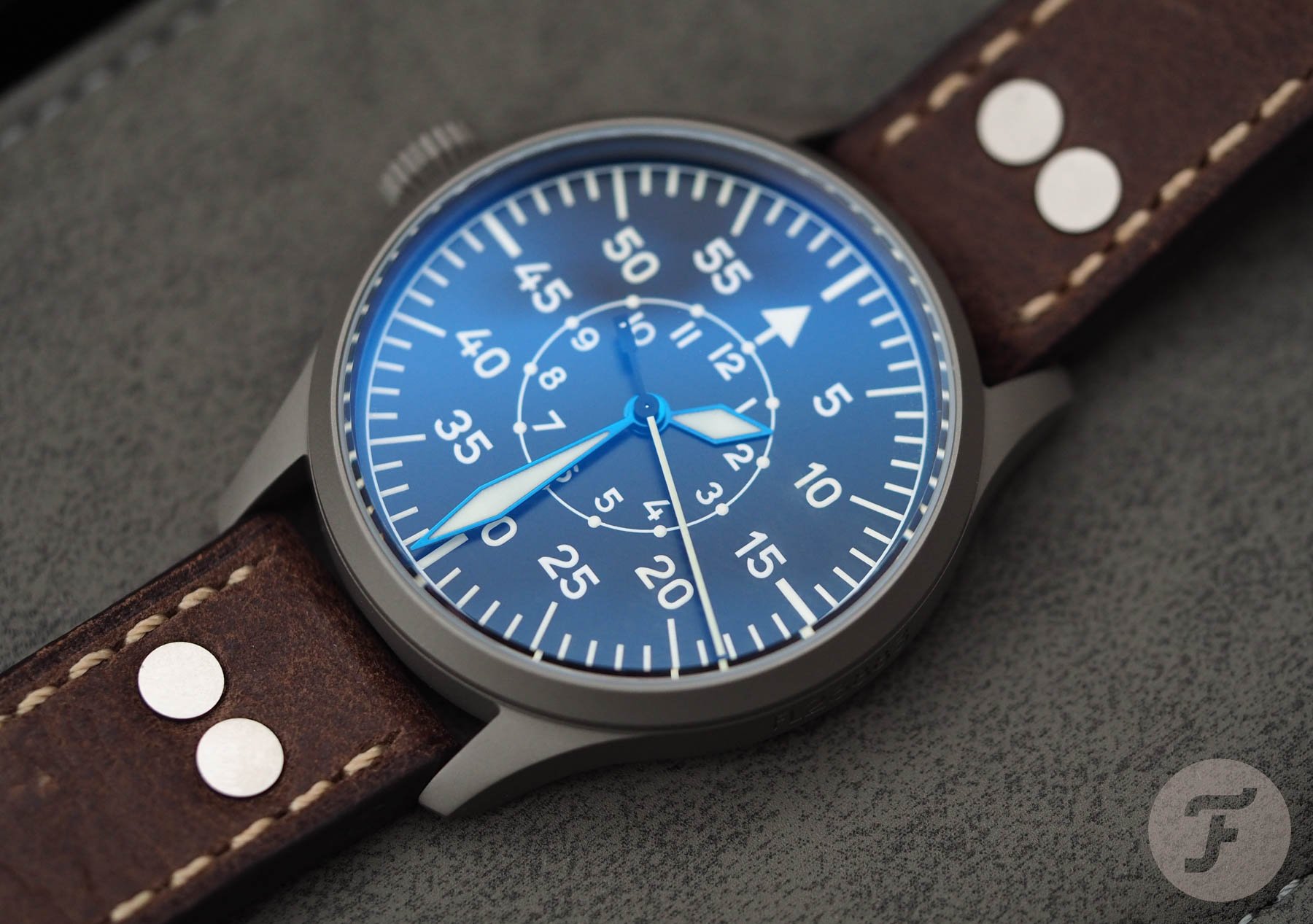 A matter of perception and personal position

When the concern surrounding the continued use of the RLM’s item code on the case of Laco Fliegers was first brought to my attention, I found it perplexing, to be honest. I’d be lying if I said it troubled me personally. I have very little direct connection to WWII. My maternal grandfather (a man who dreamed his whole life of giving up his career as a gardener and becoming a watchmaker) served as an RAF mechanic in Canada, while my father’s father spent six years hiding under a desk in Manchester waiting for it all to blow over. 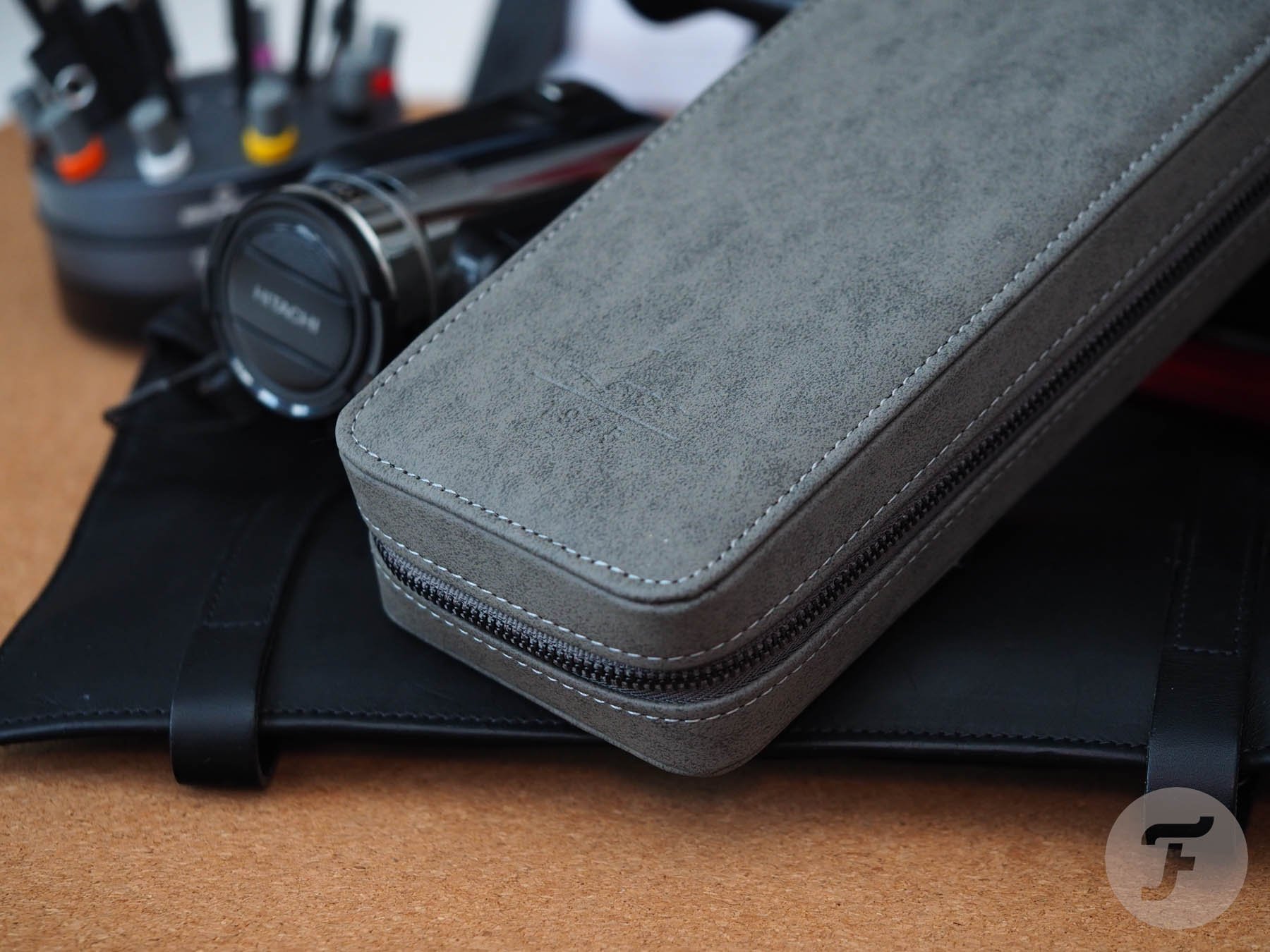 With the exception of a great uncle who was murdered by a ghost while defending a strategically valuable haunted house from the Nazis (I kid you not; that is genuinely a story that was passed down to us in all seriousness), everyone in my family survived the war and seemed largely unaffected by it. As such, I reached out to several friends of different nationalities, ethnicities, and backgrounds that I knew had some really visceral links to the horrors of war and asked them their opinion on the subject of these watches and if they were something I should, on moral or ethical grounds, steer clear of. 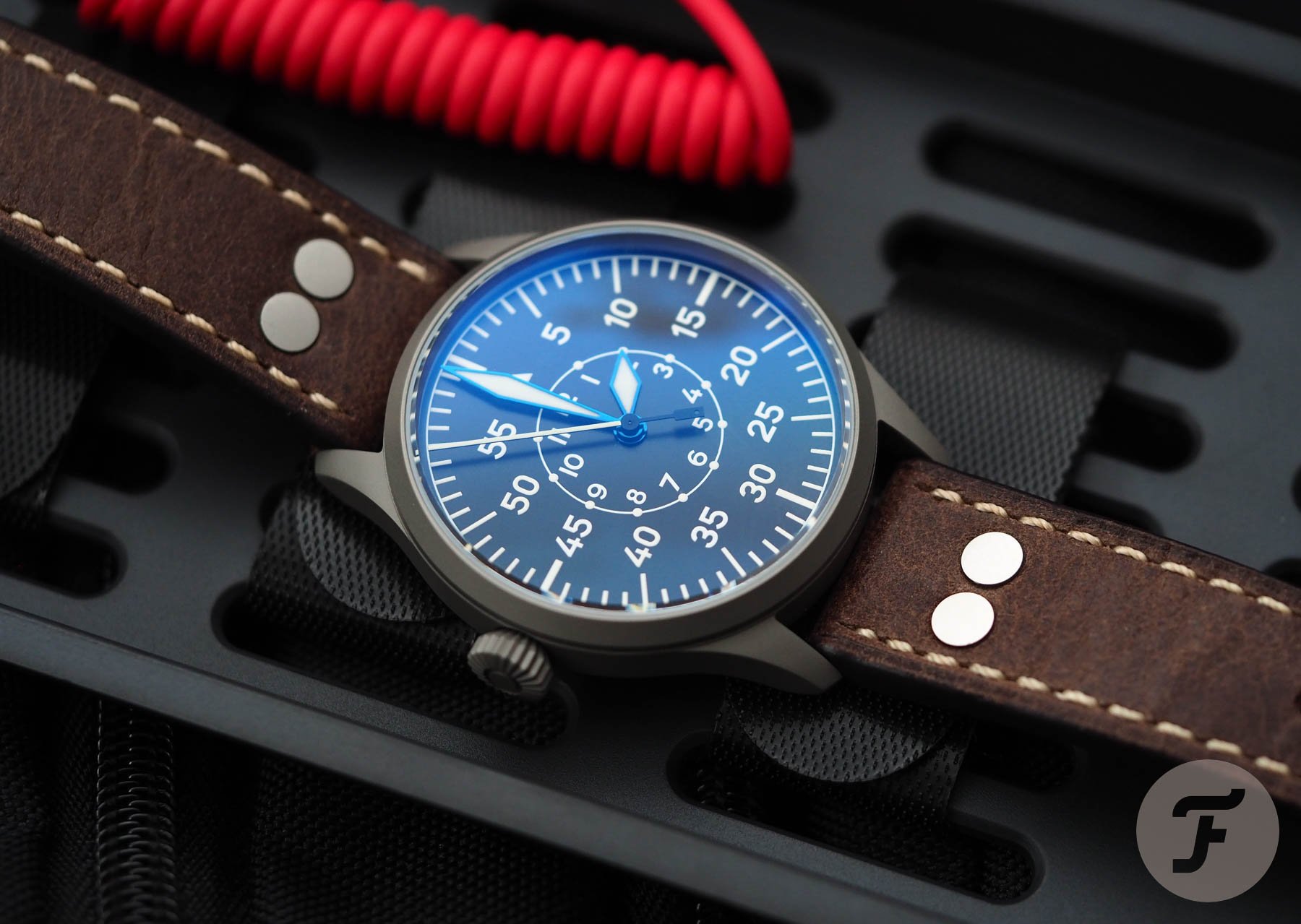 To assume makes an ASS of U and ME

The resulting interviews returned an incredible mixture of opinions. I was almost always wrong in my assumptions and was forced to acknowledge I had clearly over-simplified the situation. For example, I had expected the most senior of my interviewees — a Jewish man born very shortly after the war’s conclusion — to be strongly against such an object, while expecting his son (who isn’t much older than me), to feel very removed from that position. I had it the wrong way around. 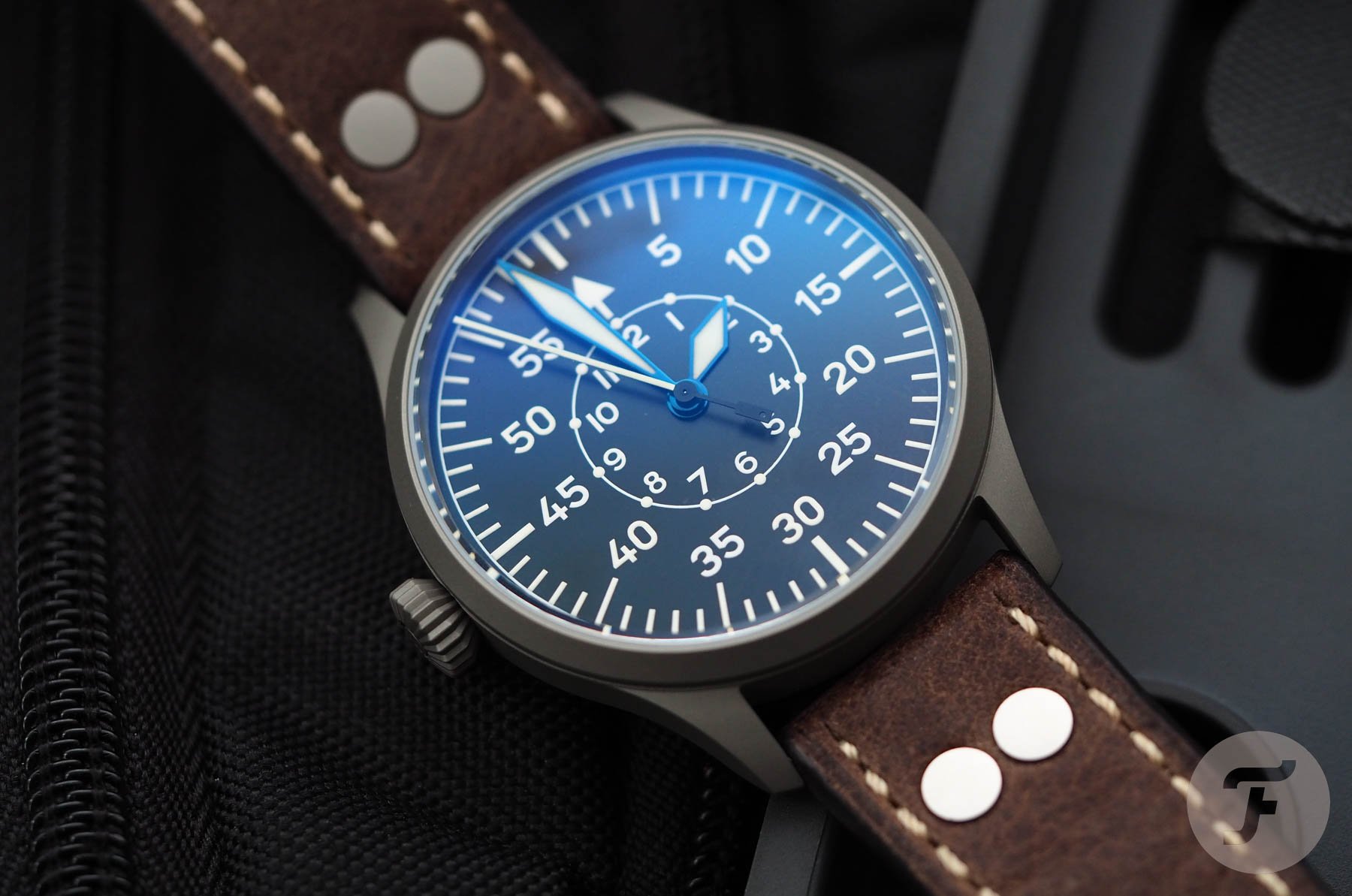 The older of the two actually collected Pilot’s watches and had every “no-no” brand under the sun in his stable. I expressed my shock. He shrugged and said, rather nonchalantly, “The past is the past. What could we have expected them to do at the time? Many of them didn’t realize what they were getting into, and many of them were forced to get into it whether they wanted to or not. It’s easy to stand on a soapbox these days and say that ‘This is wrong’, or decry people for being ‘weak’, but try doing that with a gun to your head and the heads of your family. I don’t hold those companies or their products responsible for the evil of a lunatic.” 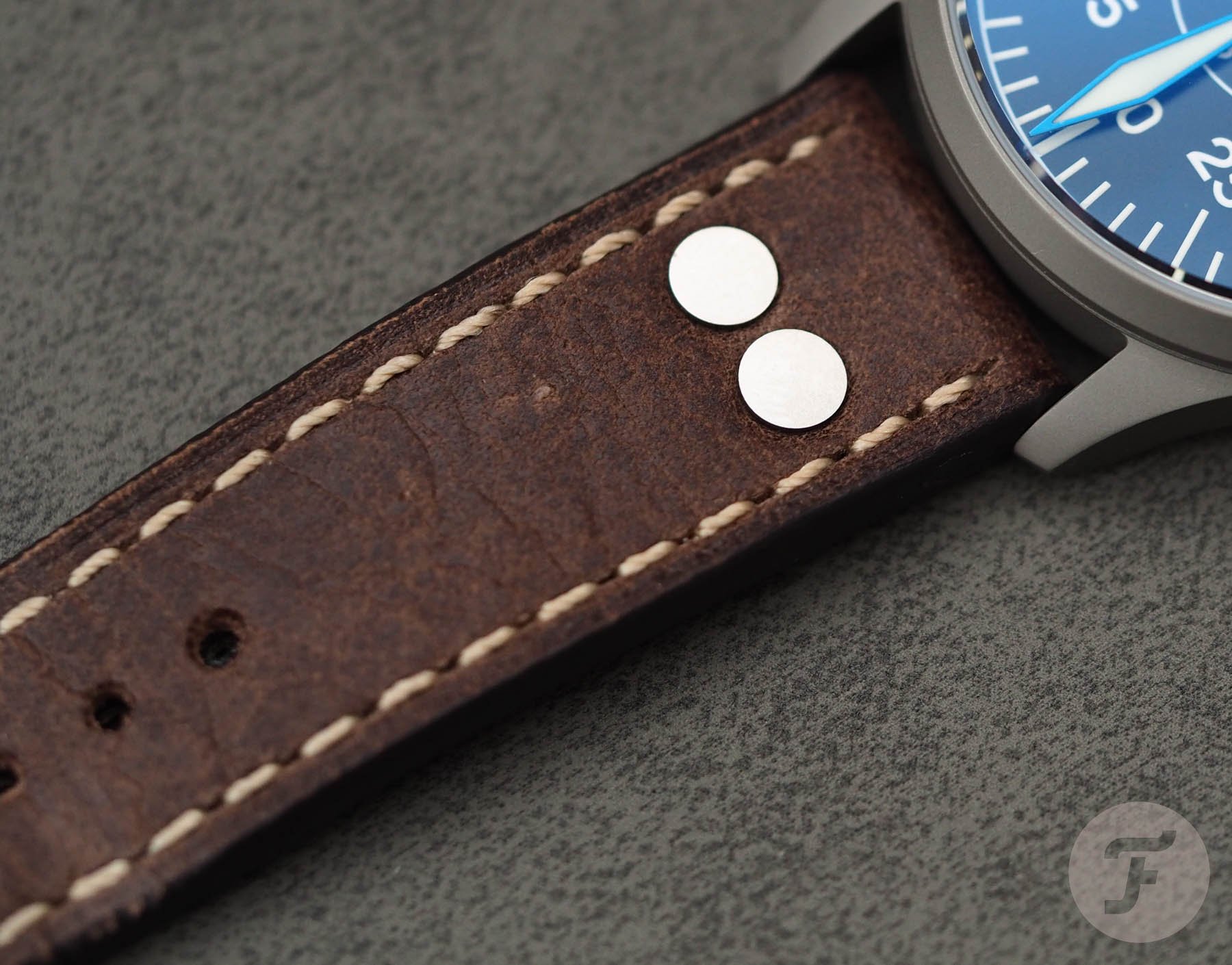 Conversely, his son, who was, as we would say these days, significantly more “woke” than his father, had come to see such callbacks to a gruesome past as, if not unacceptable, at least in bad taste. Those two testimonies were the ones of the many I gathered in pursuit of a better understanding of the issue that stood out to me the most. Obviously, the division between the generations and the almost counterintuitive distribution of opinions shocked me. At the end of it all, I wasn’t entirely sure how I felt about it still, but the closest I came to a conclusion was that the company itself should not be vilified to this day for performing its function during a conflict, but any glorification of that role beyond its acknowledgment should be avoided. 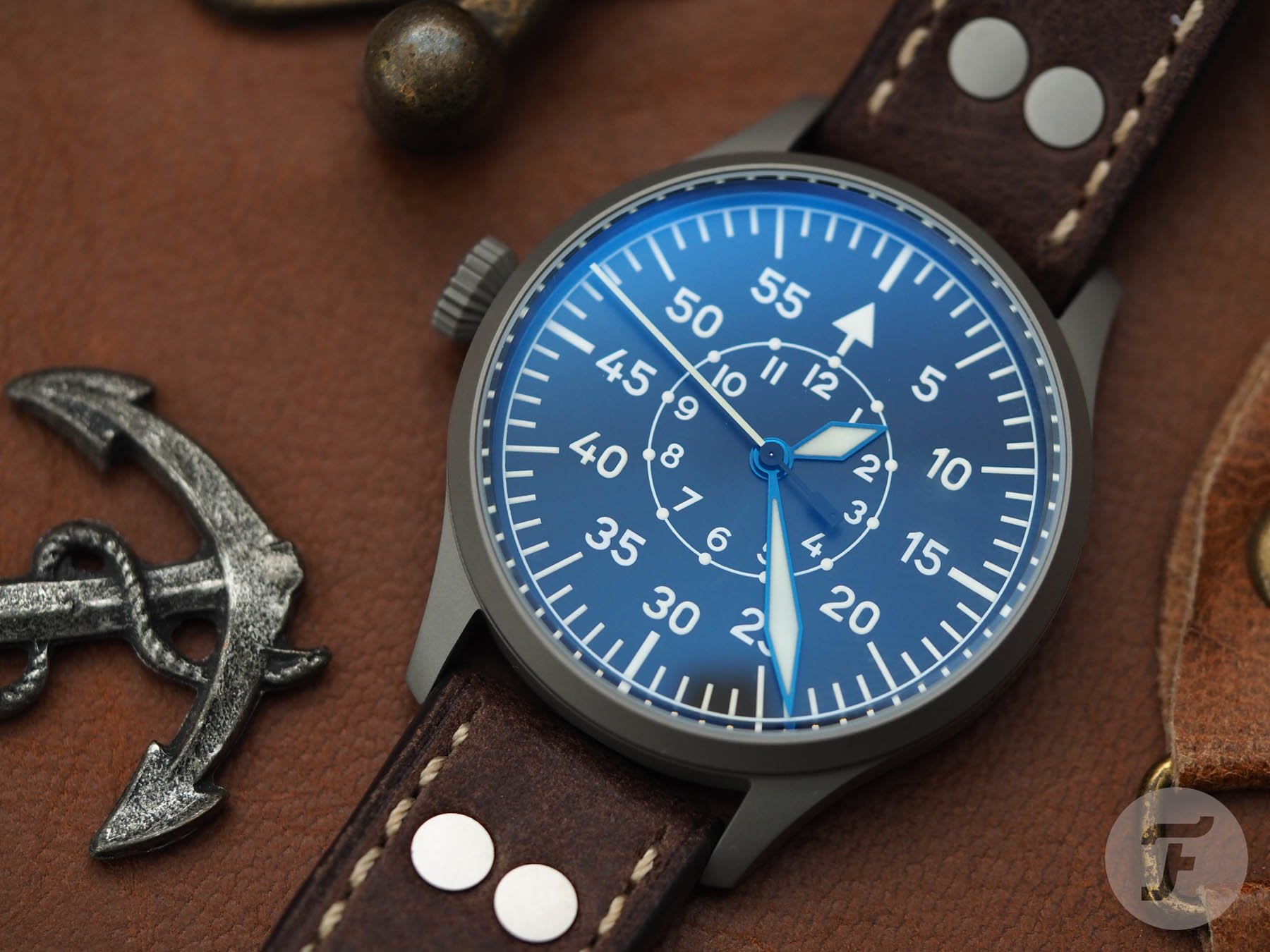 Does Laco do enough to acknowledge its past?

I would have said that the easiest way for Laco to shake a reputation that might be holding back its potential prosperity would be to get rid of the FL23883 code altogether. I asked Laco if that was something the brand had considered. Unsurprisingly, Laco came back to my query with a very well-reasoned (and clearly oft-repeated) explanation that while the brand understands it isn’t for everyone, the aim is to provide historically accurate timepieces built to modern specifications for anyone that is interested in the pure aesthetic of an authentic Flieger. Apparently, Laco said, not many people contact the brand complaining about the code, and for those that like the watches but not the FL23883 engraving, there are some options within the catalog without it for them. 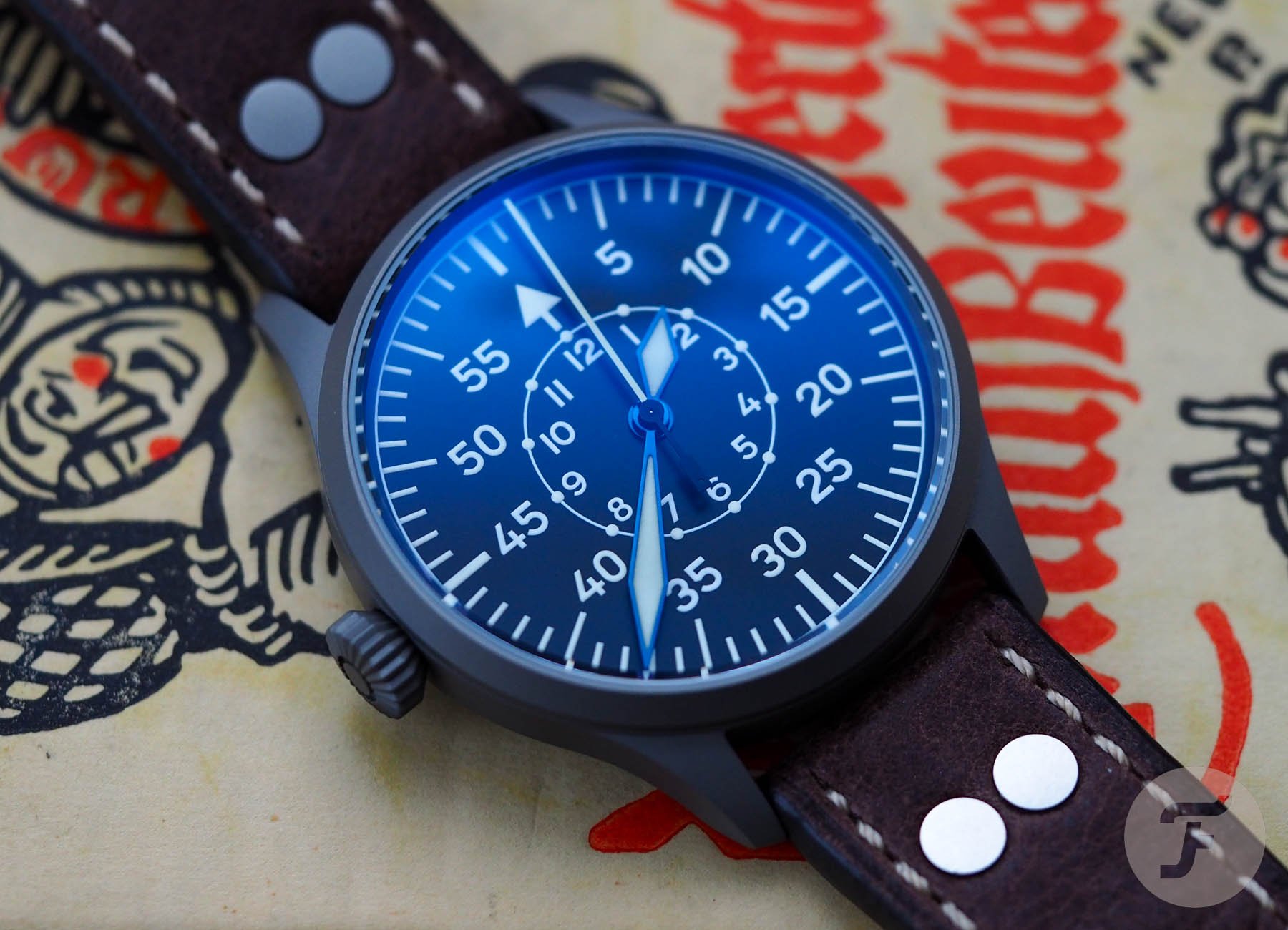 Now, to the point of this article

Here comes a watch review. Apologies for the even-lengthier-than-usual preamble, but these watches are controversial and I’m not prepared to pretend they’re not. It’s a conversation that has started many debates in the history of watchmaking, and I’d like to see your (respectful) takes on this issue in the comments below. Believe it or not, this topic was raised by RJ himself all the way back in 2004 (Fratello’s first year of existence). Here we are, the best part of two decades later, and there is still no easy answer.

However, the watch I’m reviewing here — the Laco Flieger Pro — is a customizable Flieger available in three sizes (37mm, 40mm, and 43mm), with a choice of surface finishes (brushed or blasted), crown positions (left or right), date (yes or no), Anti-Reflective coating (one side or both sides), movements (manual or automatic, plain or decorated), case backs (open or closed), dial logo/Made in Germany text (yes or no), strap (brown/black/vintage), and personalized engraving (on the case back or rotor, or both). This is not the first Flieger customizer I’ve reviewed, but it is, in my opinion, the best. 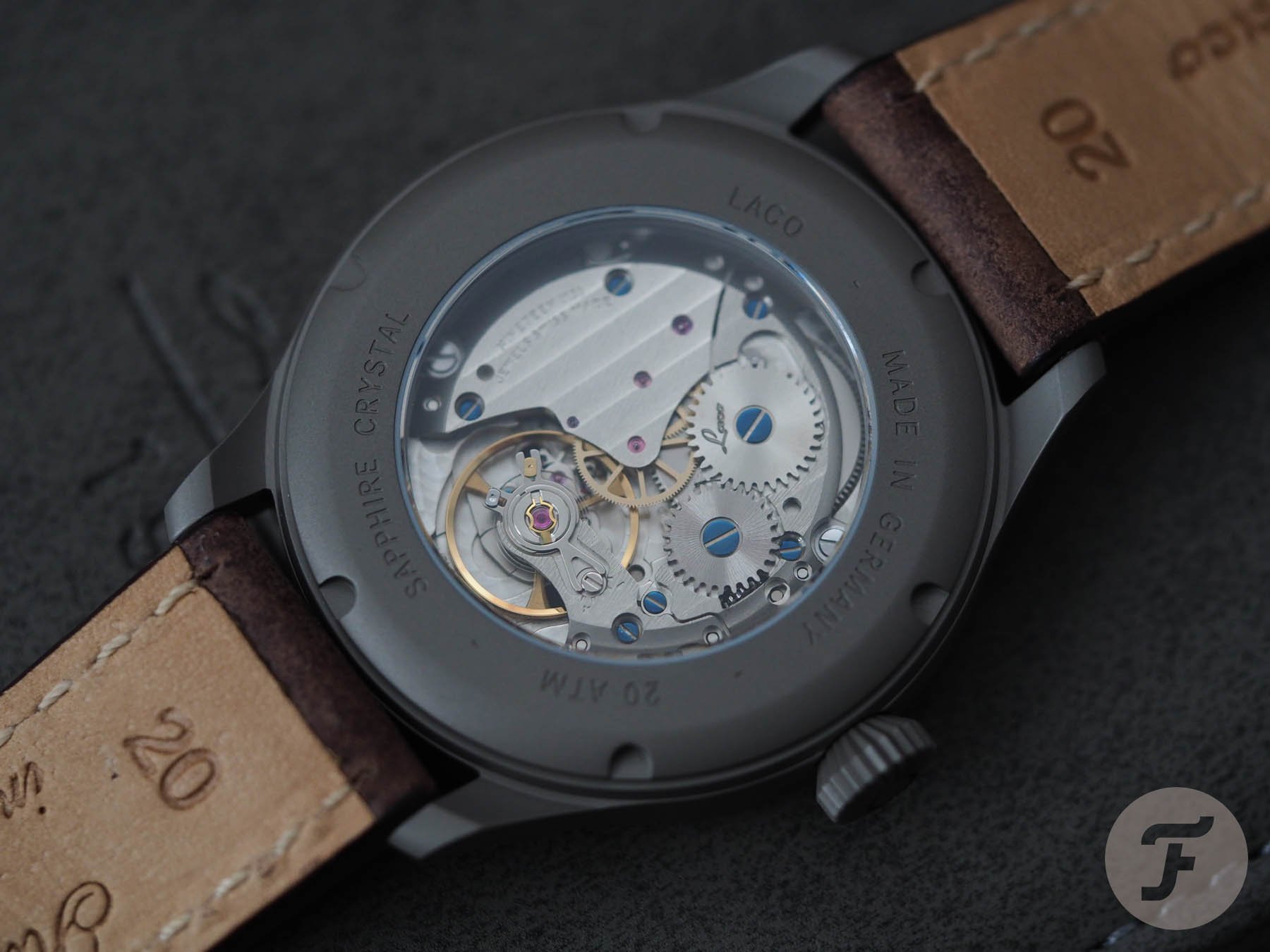 What I went for

The price of a Laco Flieger Pro starts at €850, but certain additions/selections increase the price. For example, bumping the watch up from 37 to 40mm costs €100. If you want it even bigger at 43mm, you need to add another €100 on top of that. Except for the automatic movement, I went for pretty much the most expensive execution all the way through, but I skipped on the engraving and the date (the latter of which was a necessary exclusion because I requested a left-hand crown). Because of my choices, to buy the exact watch you see in these images would cost you €1,360. 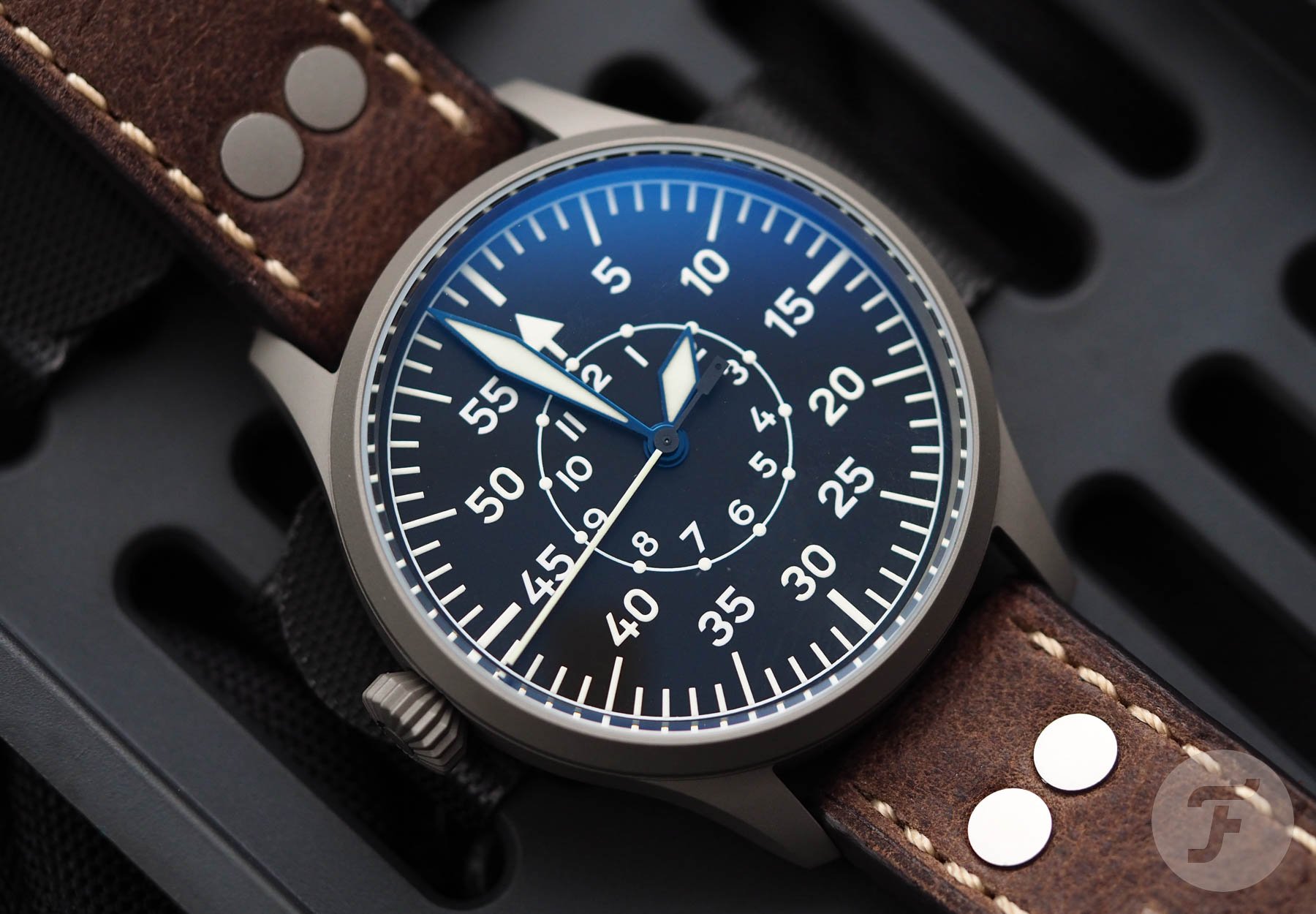 Laco pushed back on the last point very gently because the brand obviously wanted these photographs to have the wordmark on them, but I dug my heels in because the cleanliness of the dial is what made this watch my favorite Flieger ever. I would, however, change a couple of things about it if I could. 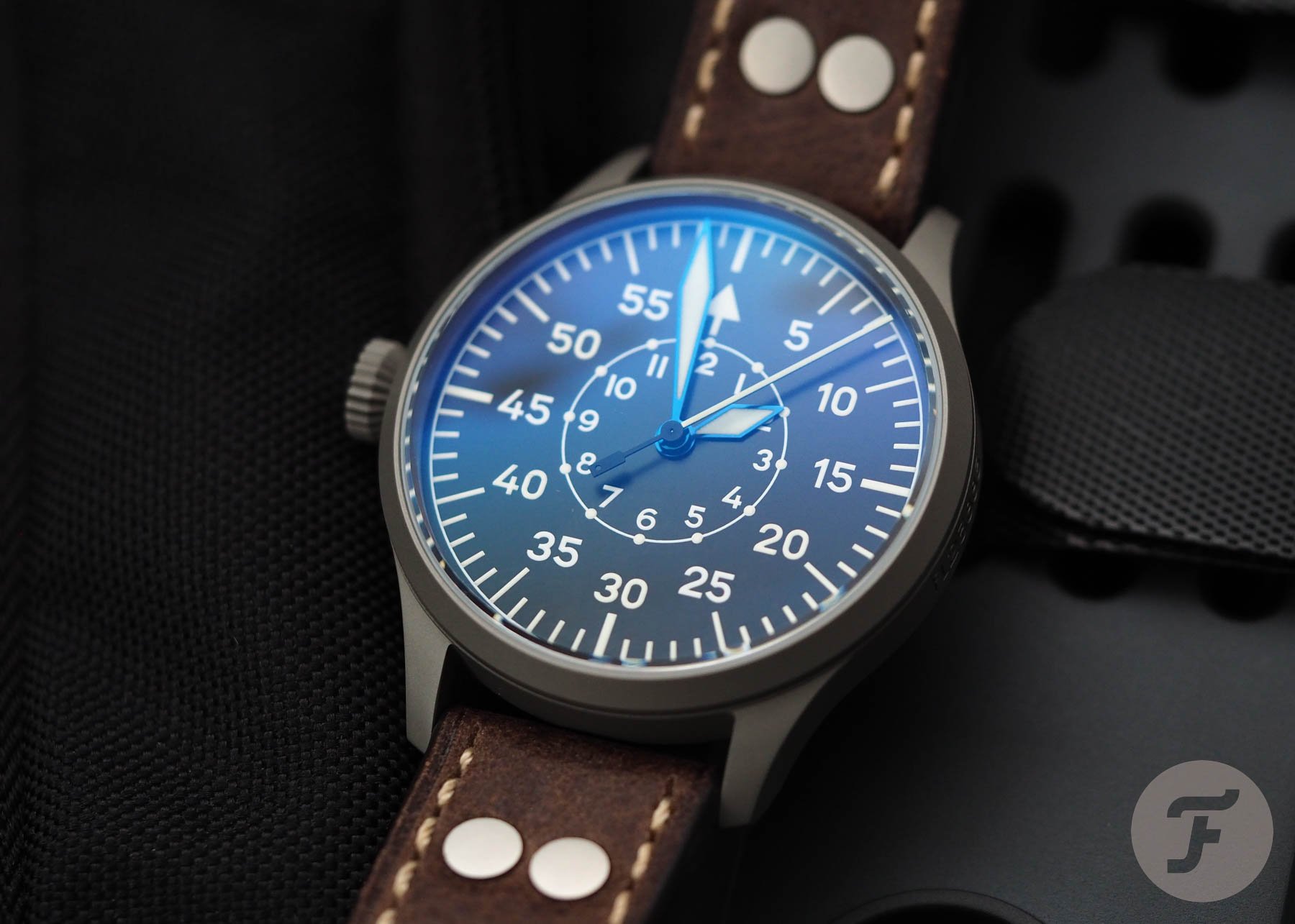 What would make it better?

I made a couple of mistakes born of curiosity more than anything. I took the AR coating on both sides because I simply wanted to see what it looked like in comparison to some of my other Pilot’s watches that just have AR coatings on the inside. AR coating on the outside of a crystal always has the potential to scratch, and I really don’t think it’s necessary. So I would save myself €100 and go for a single-sided coating, which should be more than sufficient. 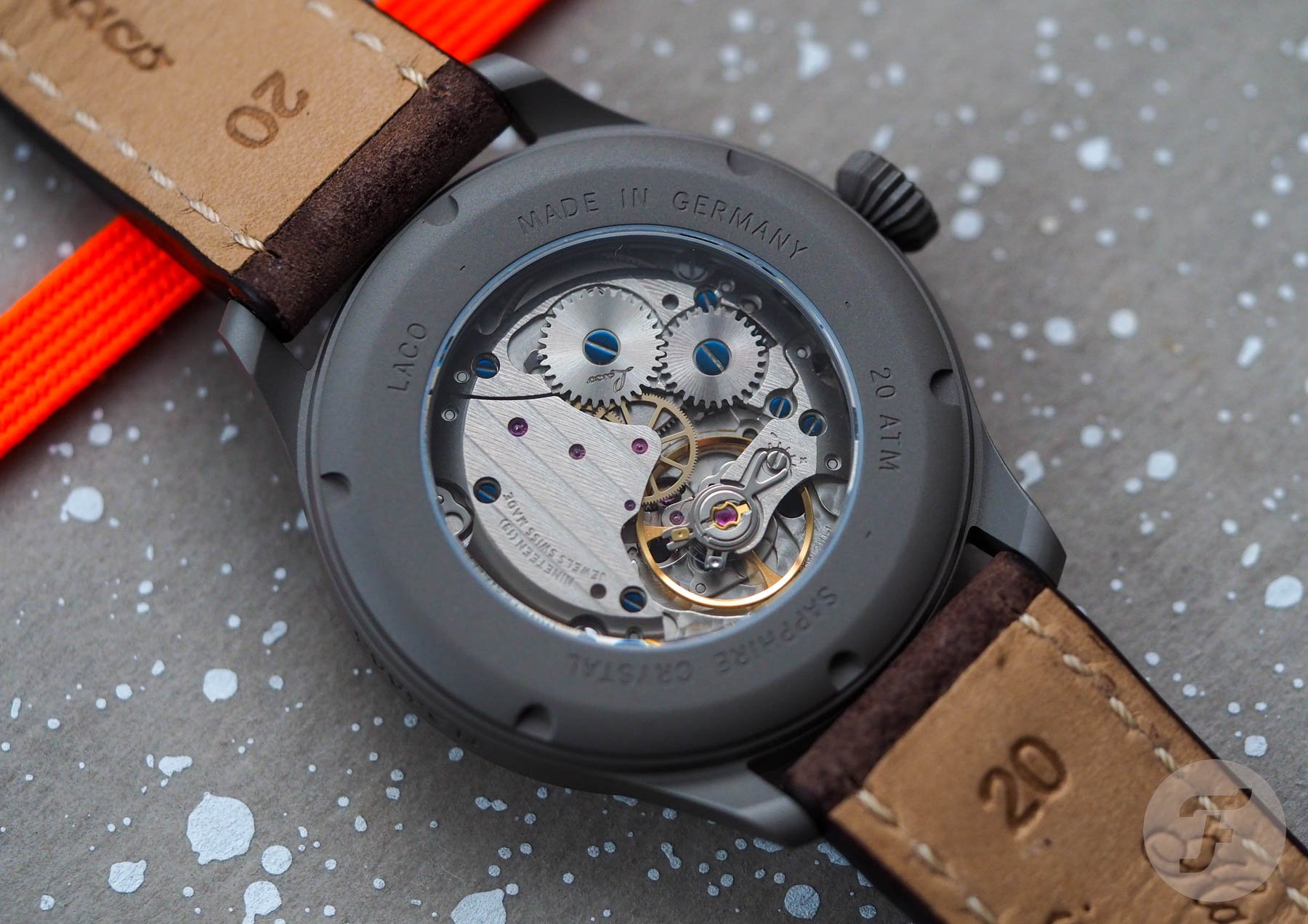 I should have chosen the automatic movement. The manual movement is cool and not one I had in my collection in that execution so, for me, I’m happy enough with it. But, honestly, the movement is simply too small for the case and looks completely stranded in there, about a mile removed from the inside of the sapphire display back. Take the auto. It fills the case and takes care of winding for you. Which, if you go for the left-hand drive version as I did, will feel like a godsend rather than having to take the watch off and wind it upside-down if you’re right-handed like me.

If I were Laco, I would make the removal of the FL23883 code an option. If you put that choice into the hands of your customer, I think you win a few more people over. Maybe I’m wrong, but I can’t imagine many decent arguments for that option being a bad thing.

Lastly, why is the buckle not blasted too? That’s simply an oversight, in my opinion. And it’s a shame because that blasted finish is amazing. 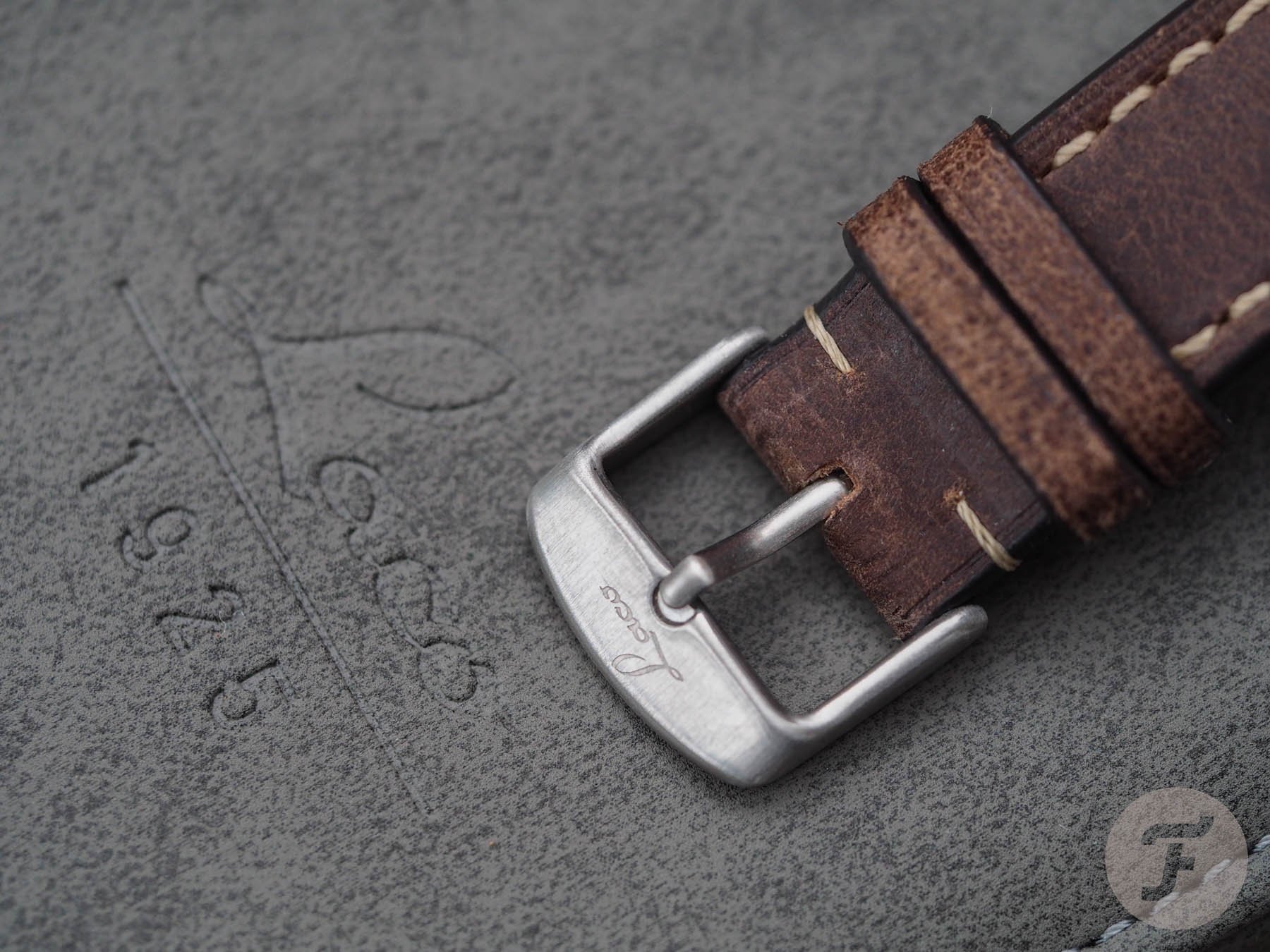 What I did right

Did I mention that the blasted finish is amazing? I cannot overstate it. It doesn’t look like steel. It looks more like titanium. However, it has the reassuring heft of steel, which I love. It was a massive highlight of the build for me. It is so effective at reducing the watch’s visual impact, I could have handled the 43mm version instead. That said, I do think I picked the right size for everyday wear. A 43mm model would be cool, but it is only cool. It’s not as smart or refined as the 40mm option.

The absence of the logo is amazing. Laco was bold to do this. The brand was bolder still to grant me my wish, knowing you’d all be seeing this glorious naked dial. It was the right call. This watch is a tool. The role watches like this played in humanity’s greatest tragedy is better understood when we see them in this state. They are just tools. There is no ego or personality attached to them. You can see why the Flieger blueprint is so enduring. It is time-telling in perhaps its purest form. And, for that reason alone, it is glorious. 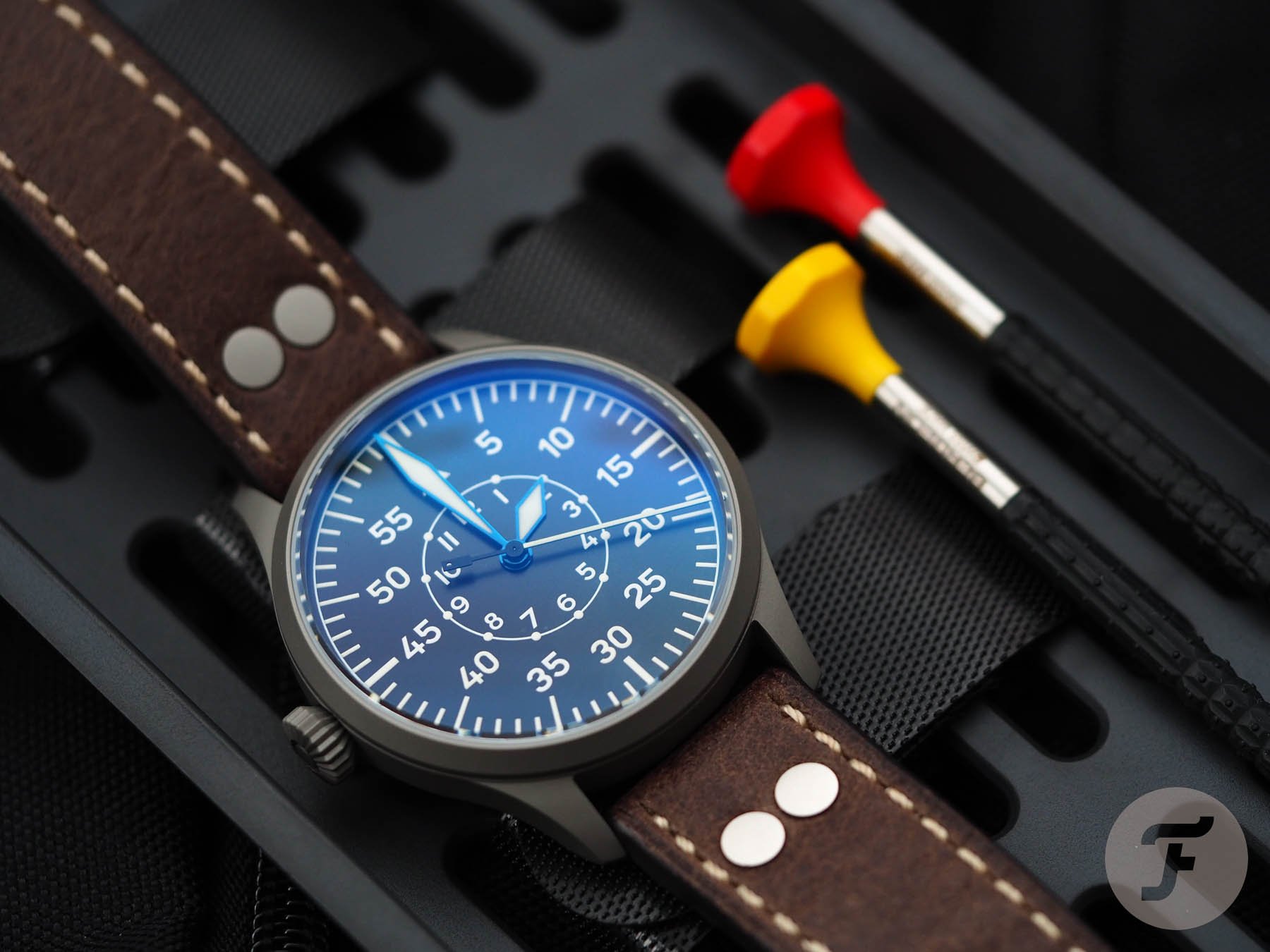 But is this something you would buy? How do you feel about the Laco brand and all other brands with similar histories? Do you prefer that we talk about these things openly or would you rather we sweep it under the carpet? Do you like Fliegers or Pilot’s watches in general? Which brand do you think makes the best? Do you feel Laco is asking a fair price for this service? And how about each individual upgrade? Does the pricing structure of each make sense to you or not? Yes, that was no less than eight consecutive questions. But I’m looking forward to a fizzing comments section on this one! Learn more about the Laco Flieger Pro configurator here.