A Lighthearted Coffee Corner Watch Talk — Why So Serious?

What I need this morning is a lighthearted watch talk over a nice cup of coffee. A strong yet creamy flat white would be nice — since it’s a 1980s Australian invention, I consider it the most easy-going coffee out there. I also want to keep it nice and light and colorful. That could be a reaction to the inevitable rain and gray skies that come with autumn. Luckily, my Maurice Lacroix Aikon #tide Benzilla arrived just in time to brighten the day. And both the graffiti-inspired G-Shock Street Spirit collection and the Richard Mille RM 88 Automatic Tourbillon Smiley will put a smile on your face.

This is not the first time that the Maurice Lacroix Aikon #tide makes its appearance on Fratello. And even the Benzilla version has been featured. By me. Because I loved it in the pictures. But when I saw it live during Geneva Watch Days 2022 and put it on my wrist, I knew I had to have one. The Aikon is already a colorful watch, but the Benzilla is more than just that. The eponymous Thai artist was asked by Maurice Lacroix to create something special, and he put his three-eyed character LOOOK — an alien who came from nowhere to live among us — on the dial. I think it looks genius, fun, and wild. 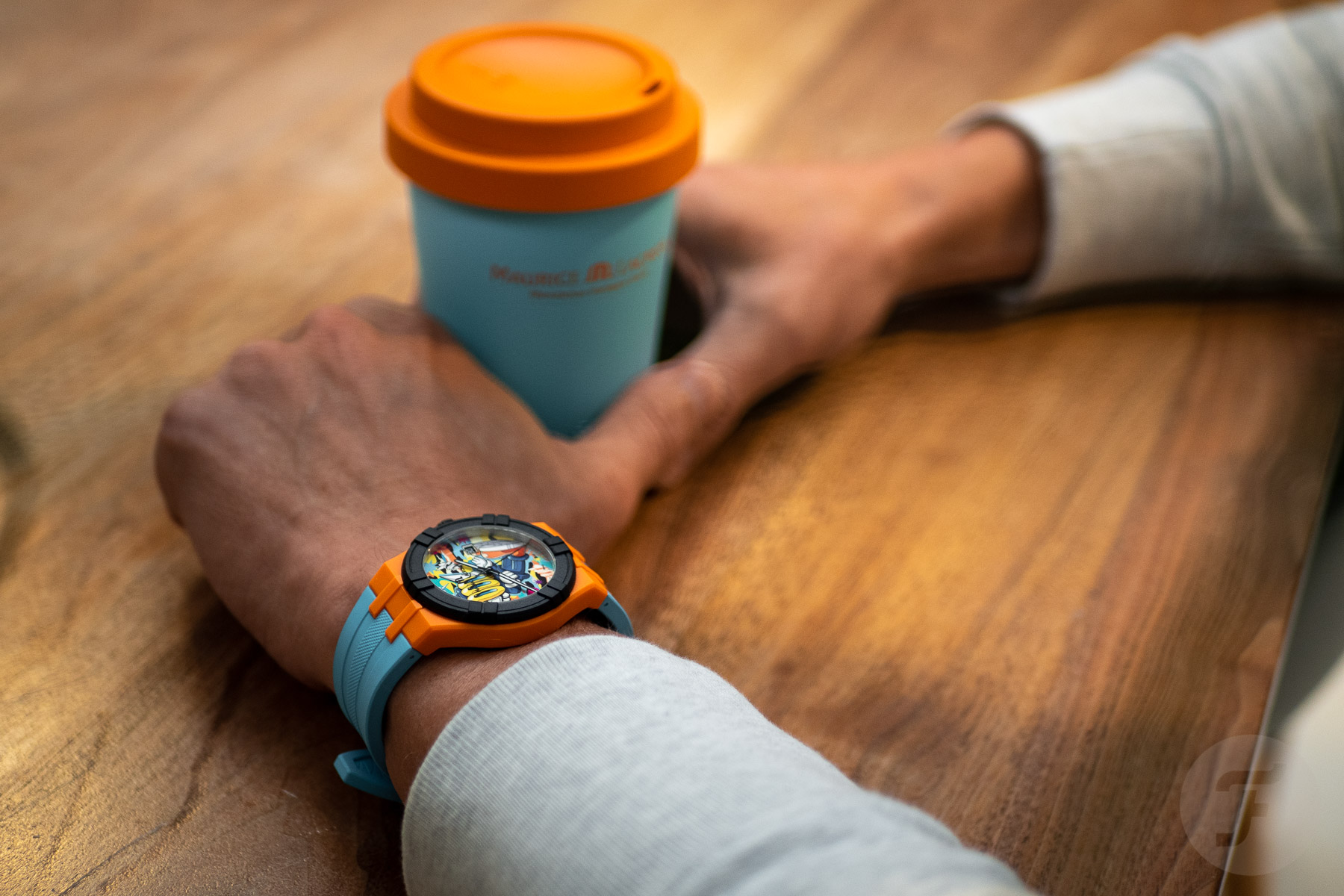 I love the way the Maurice Lacroix Aikon #tide Benzilla looks and matches everything you wear because it matches precisely nothing you wear. And I do appreciate the fact that the watch is made from ocean-bound plastic and that it takes 17 bottles to make one watch and its user-friendly packaging. 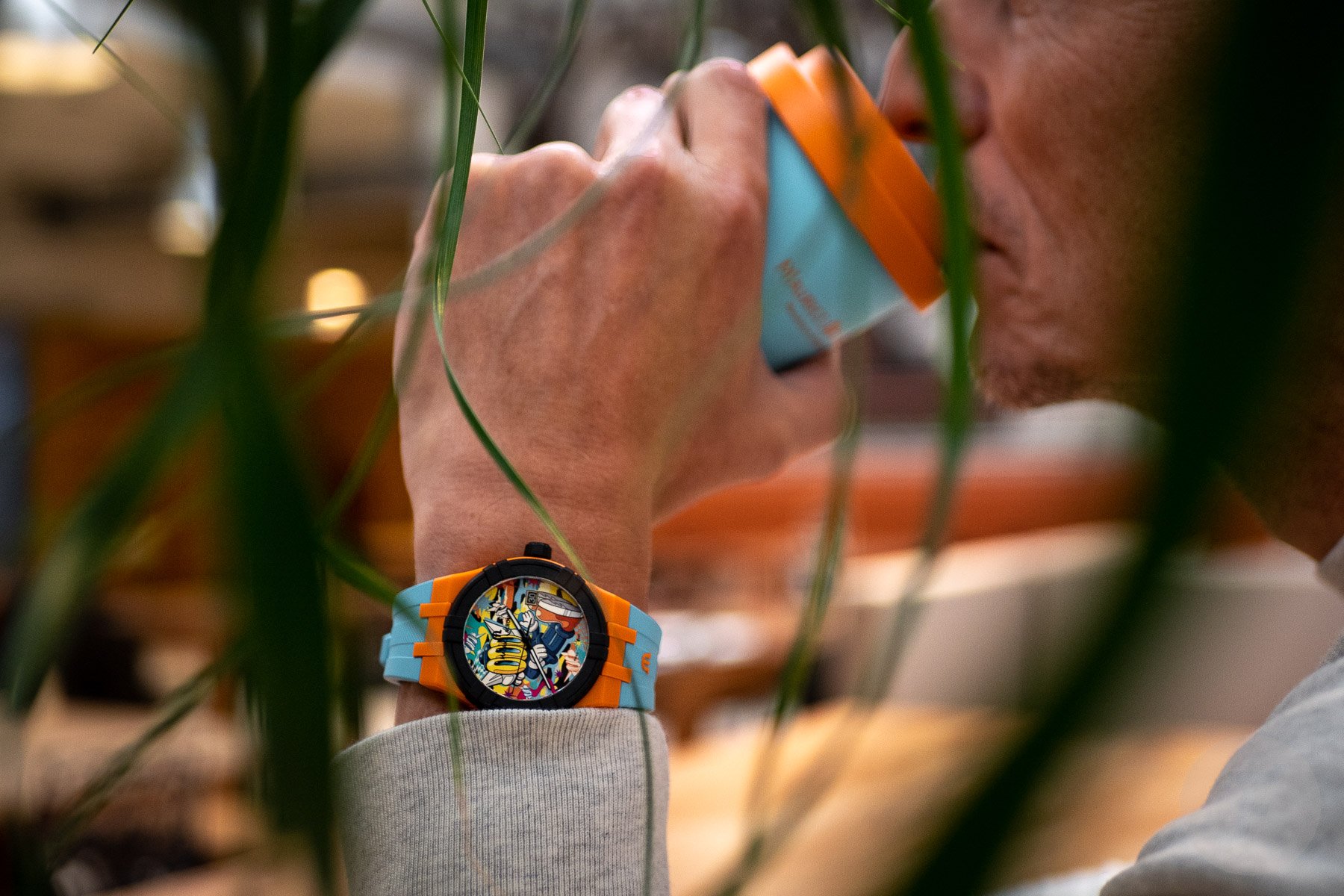 Thanks to #tide, a company that specializes in “upcycling” the plastic waste that is polluting our oceans, the 40mm Aikon is a do-good kind of watch. And it also is good on the wrist. The case, made of a mix of upcycled plastic and glass fiber that results in a composite that’s twice as hard as standard plastic, is quite slim and light. And for your information, the bezel, case back, crown, strap end piece, and buckle are also made from the new composite. 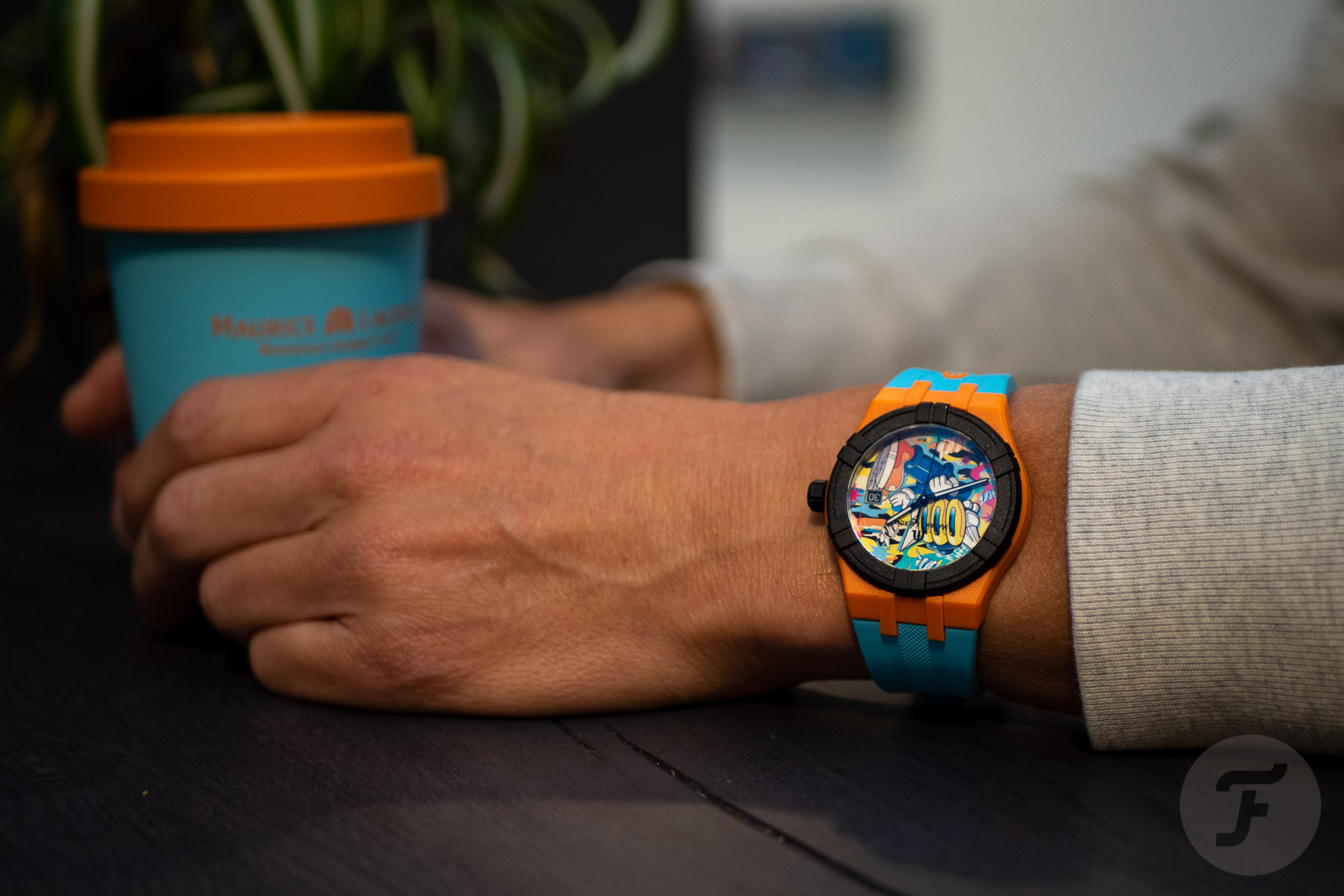 The ”M” strikes a sentimental chord

What I like about the plastic Aikon apart from its funky looks is that Maurice Lacroix opted for a sapphire crystal over the dial. It adds a bit of weight to the watch, but most importantly, because the sapphire crystal is flat, it makes the dial pop up like an overexcited alien. A very practical feature of a watch that looks like it doesn’t shy away from a dip in a (rooftop) pool is the water resistance of 100 meters. And if I get tired of the light blue strap, an Easy Strap Exchange system allows me to put on a different one in the blink of three eyes. Oh, and the little “M” on the strap is a finishing touch that strikes a sentimental note. It reminds me of Maurice Lacroix watches of decades ago that maybe didn’t quite speak to me, but for which the “M” certainly made them distinctive. 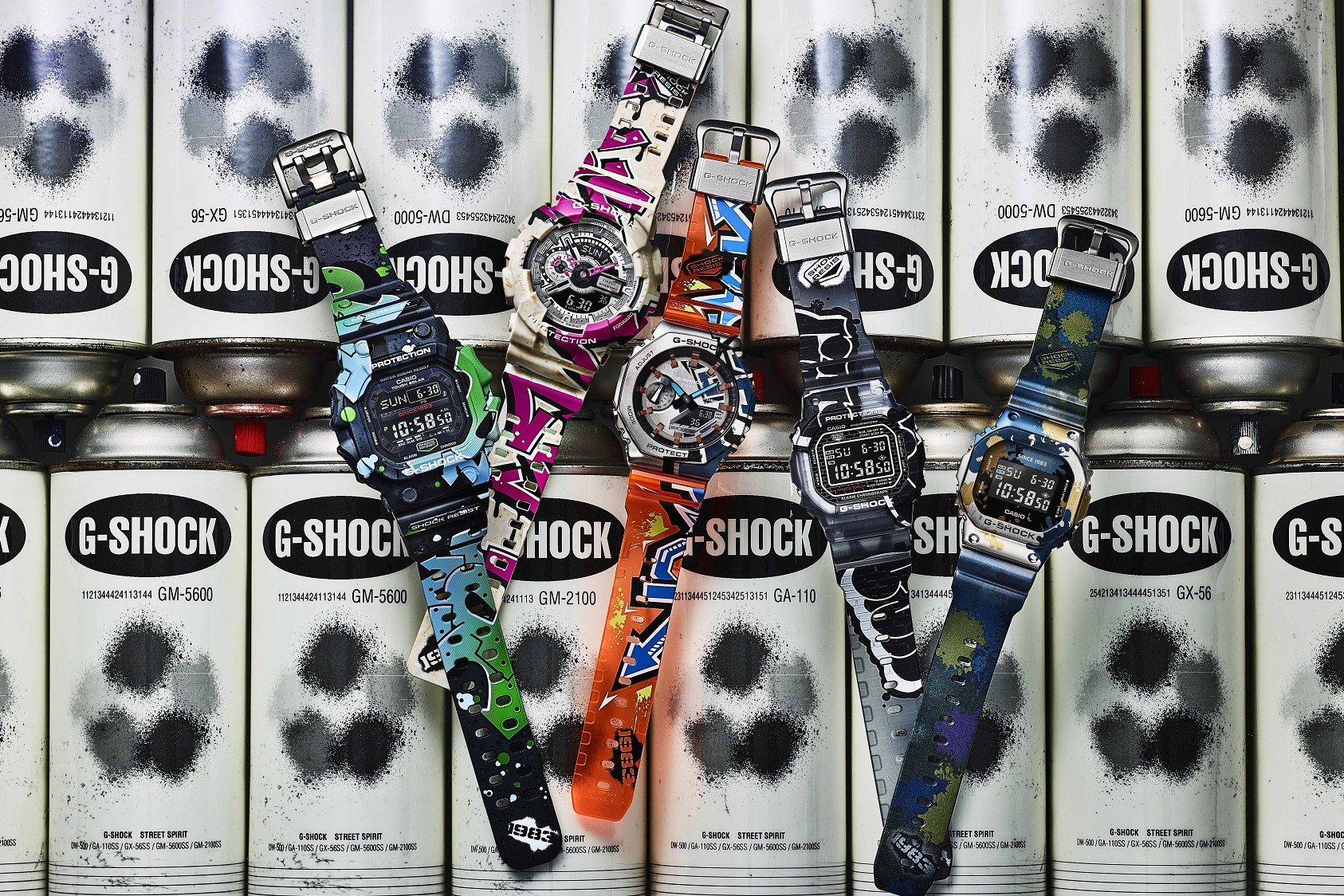 Benzilla used the Aikon as his canvas, but G-Shock took five watches from the collection and went to work on them like a hyped-up graffiti crew on a mission. Think 1980s New York subways covered in graffiti by tireless taggers who wanted to make their mark. The watches in the Street Spirit Collection all show splashed color across the bezel and strap in the original graffiti-art aesthetic. Each watch shows “Since 1983” labels as well as a stencil-style “1983”. In case you’re wondering, that was almost 40 years ago. These watches seem to be a prelude to G-Shock’s 40th anniversary coming up next year. 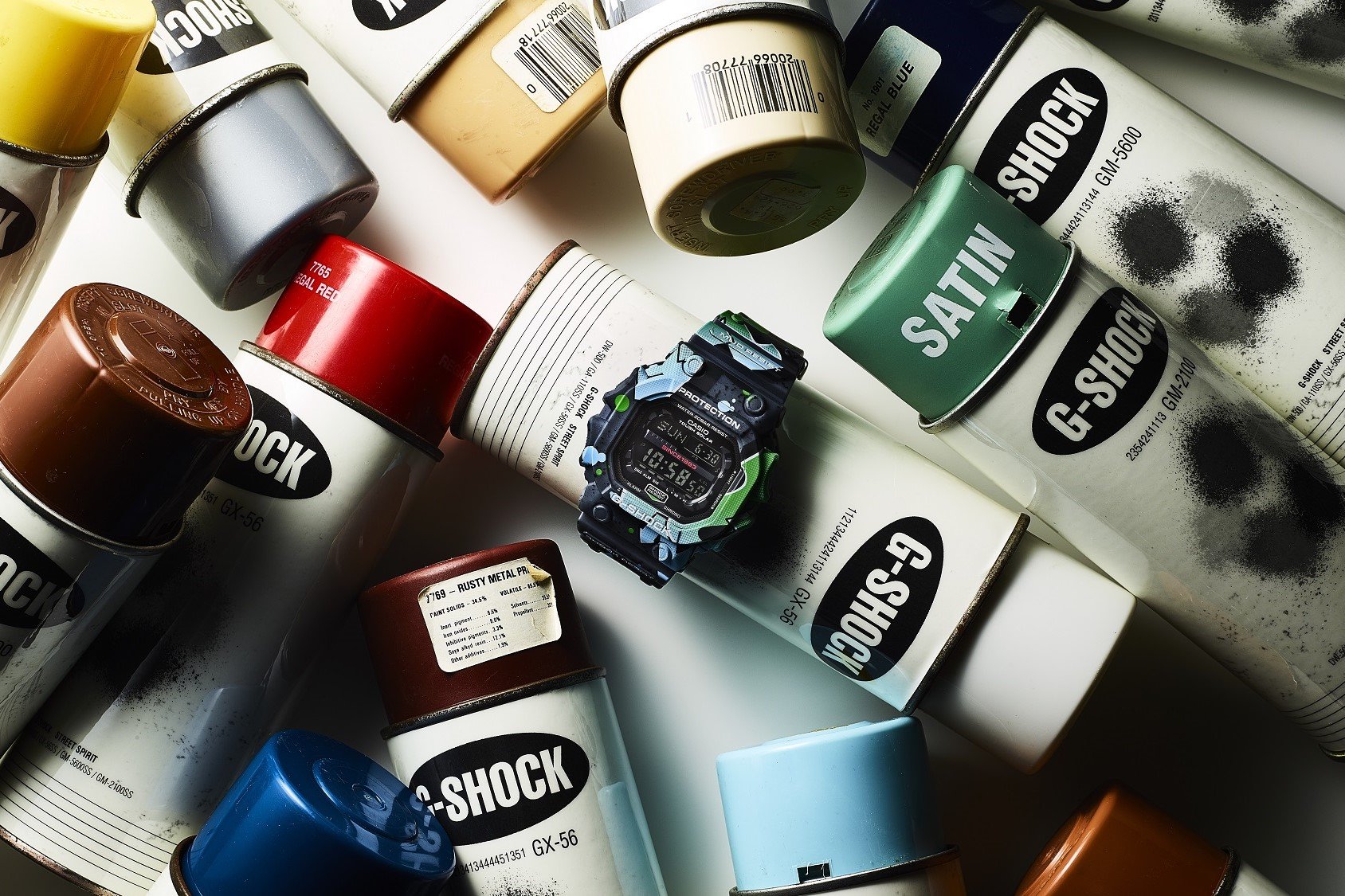 Just by the looks of it, the GX-56SS-1JR (€199) with its Tough Solar power and mud-resistance feature is my favorite. I do like the resin bezel that resembles stone and the color-changing blue and green graffiti. But then I realized that this is a 55.5 × 53.6 × 17.5mm watch. It’s way too big for my wrist. 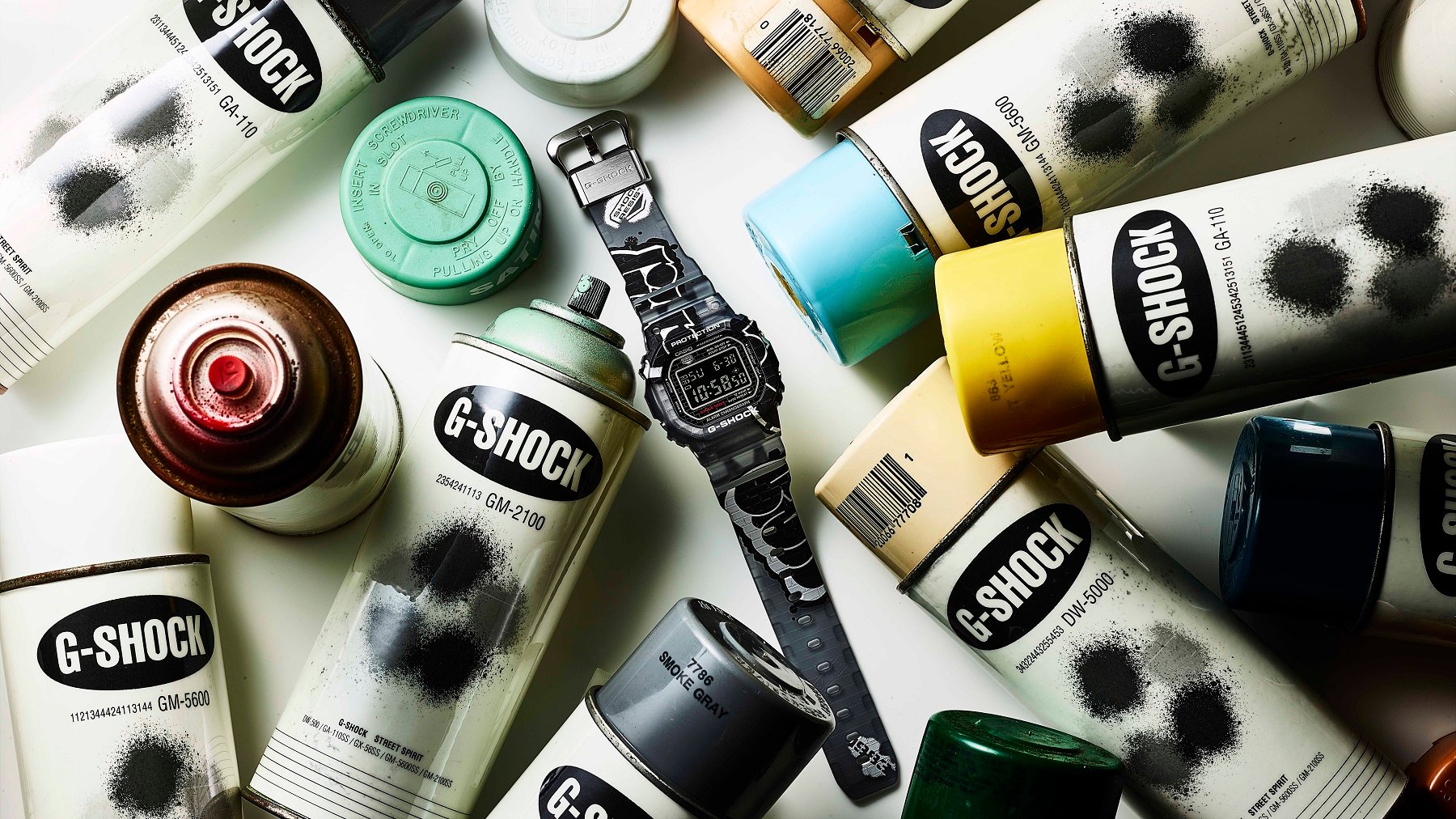 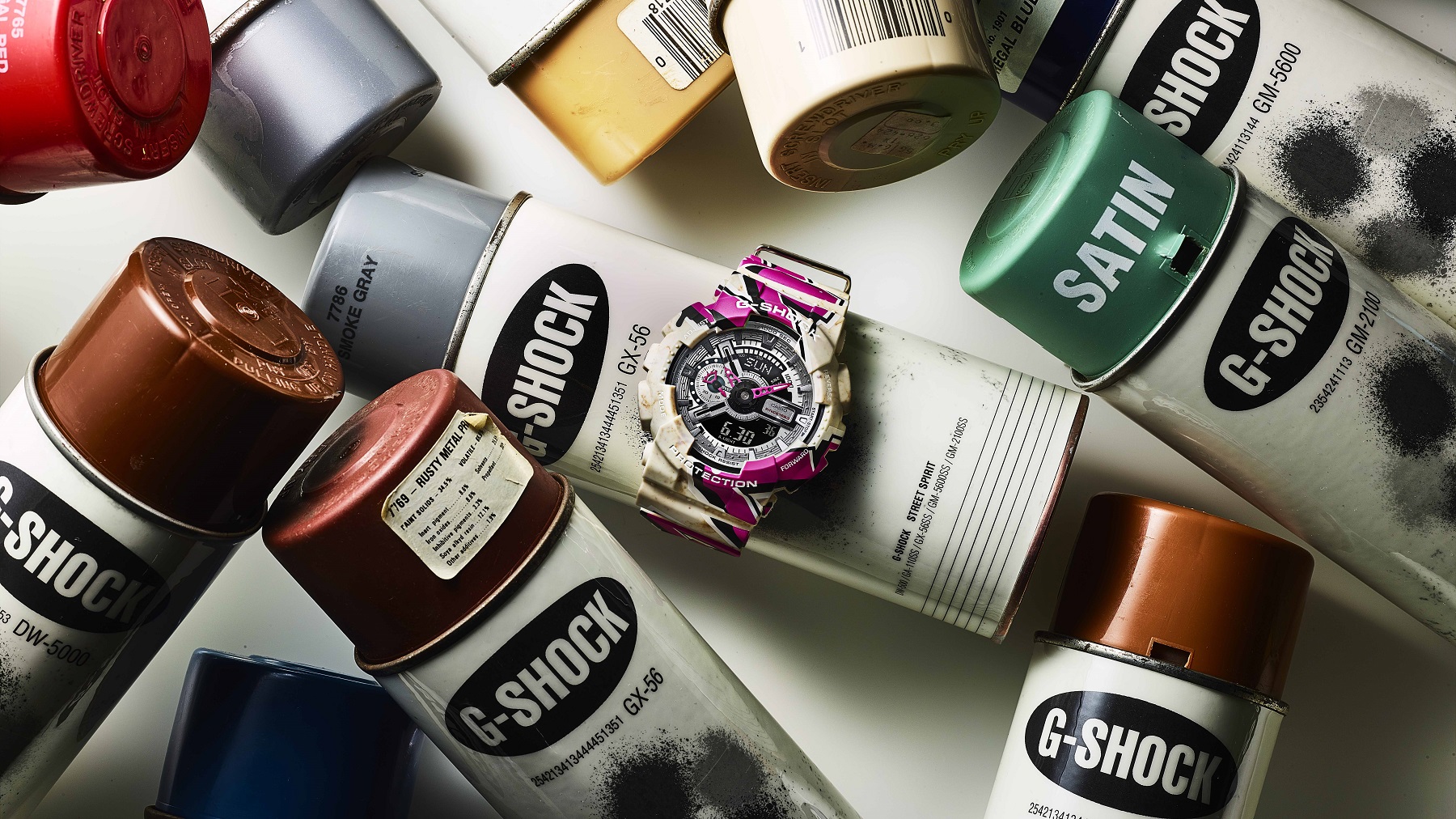 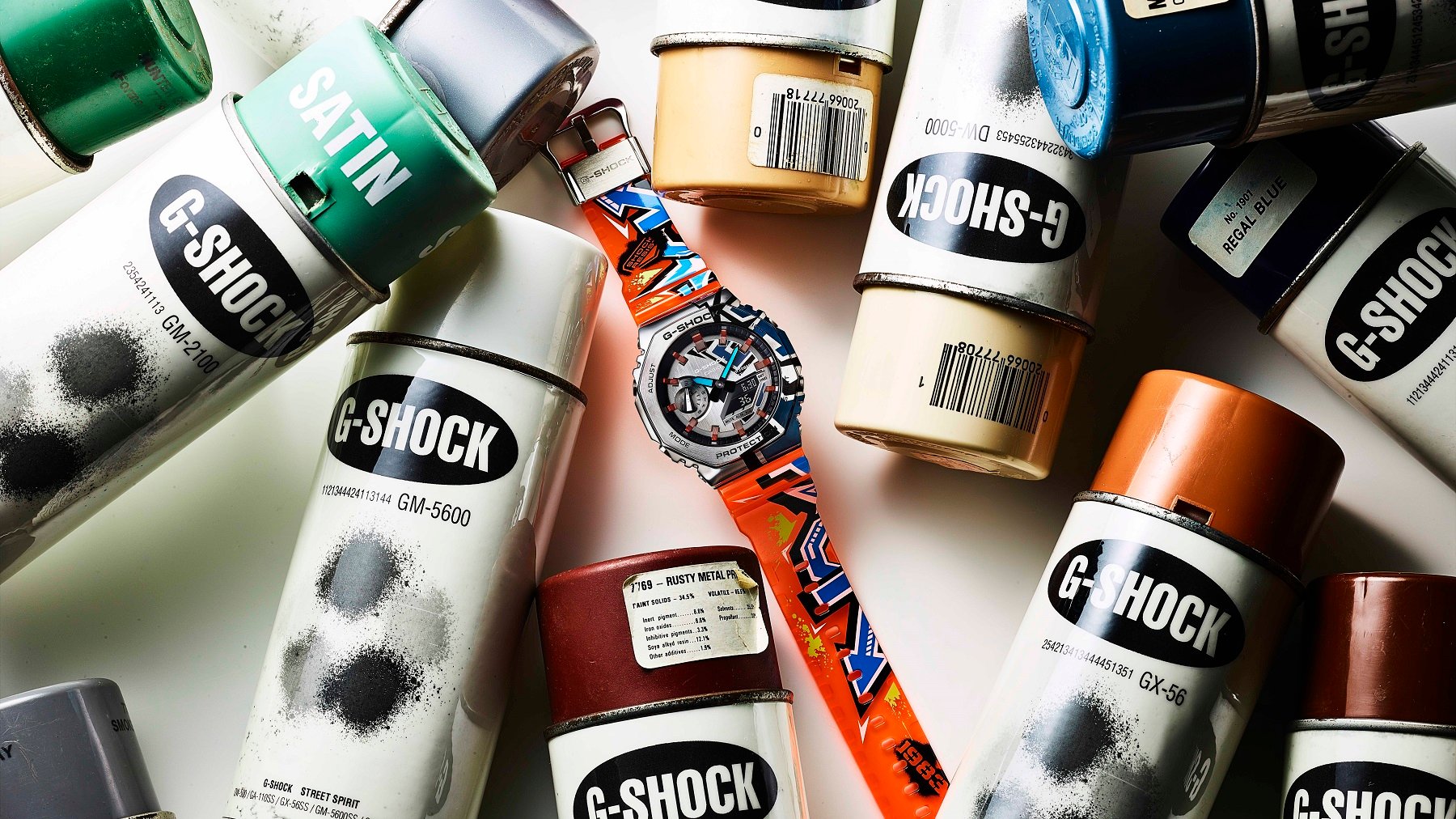 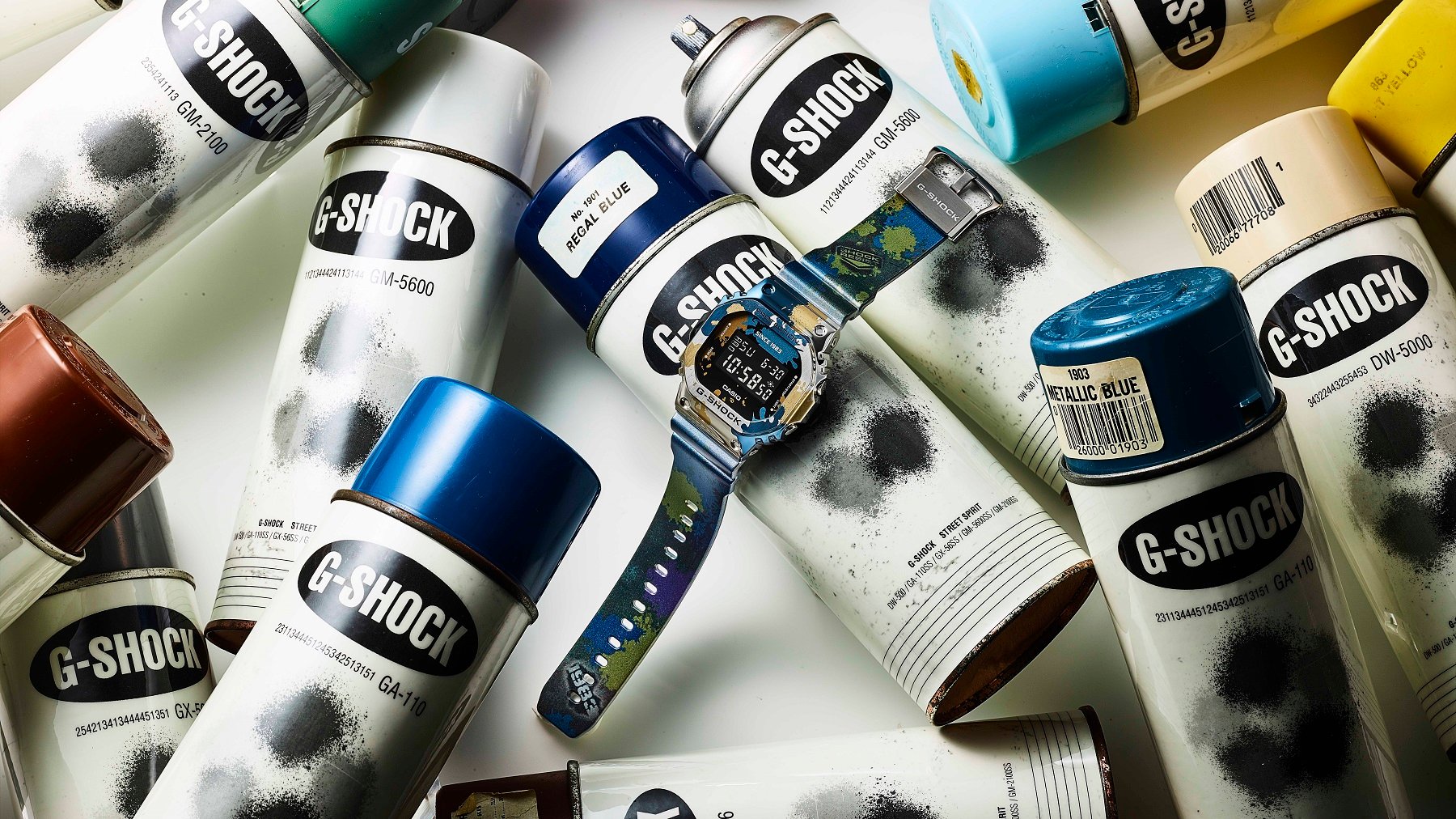 The dark and sinister DW-5000SS-1JR (€239), perhaps? Maybe a bit too moody. The GM-2100SS-1AJR (€309) is a spiced-up “CasiOak” with popping orange that sure is striking. And so is the camo-like GM-5600SS-1JR (€229) with its blue and green splatters. It’s worth mentioning that both of these GM models have steel bezels with multicolor ion plating. The fuchsia/off-white GA-110SS-1AJR (€189) sure looks different, but I don’t care too much for the case shape. I just can’t make a choice. Which is your favorite piece?

Each watch comes in packaging featuring the full graffiti artwork that the design of the watch is based on. You can find more info about the G-Shock Street Spirit Collection here. 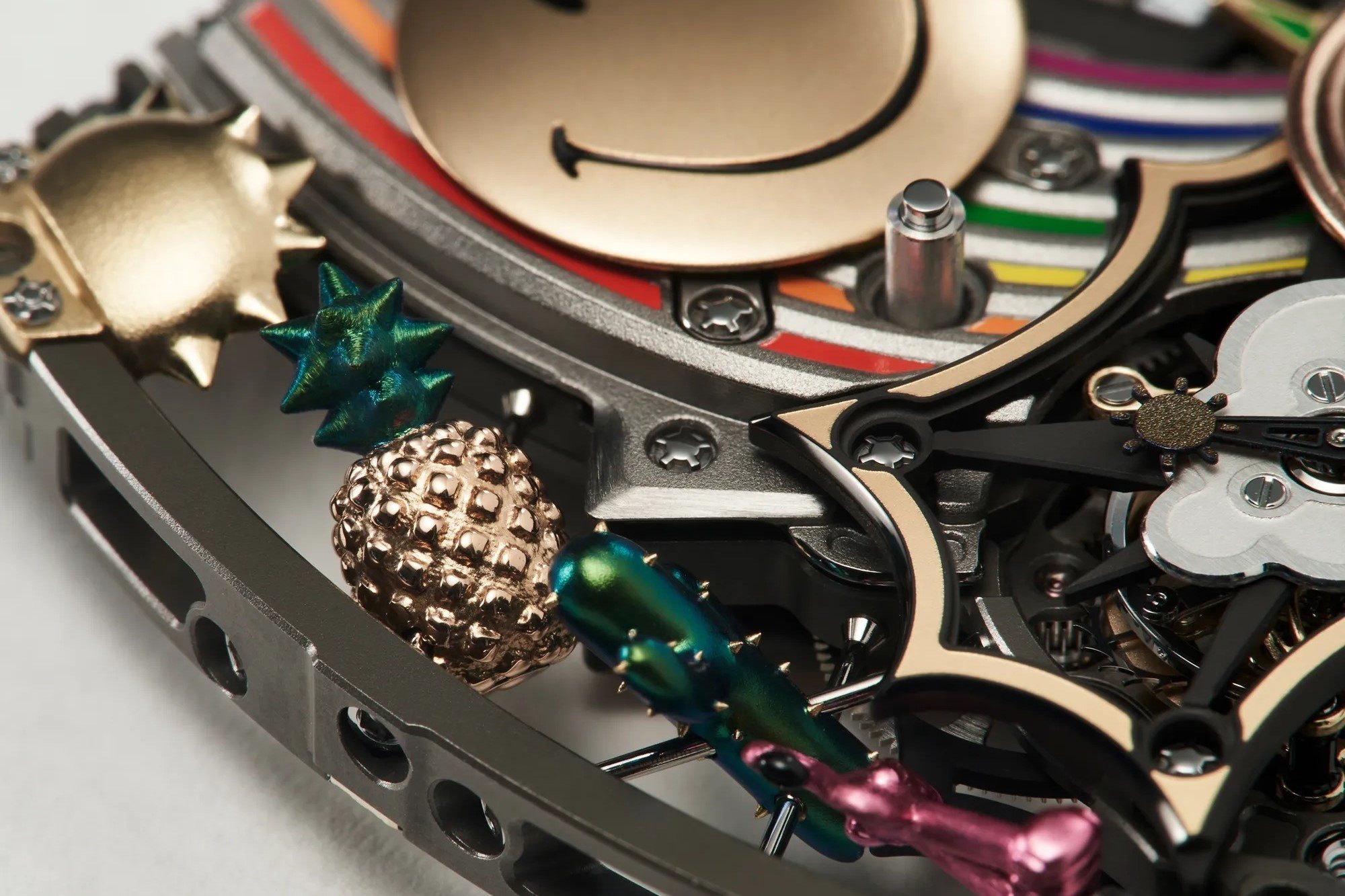 The smiley turns 50, and Richard Mille throws it a party

Remember the first time you saw a smiley face? No? Remember when you last used one? Chances are it was earlier today. The smiley, drawn by Franklin Loufrani a little over 50 years ago, evolved from an ideogram into a supporter and even a (poor) substitute for written language. The smiley is also a major symbol of pop culture, and that’s probably why Richard Mille decided to create the RM 88 Automatic Tourbillon Smiley — for all those 50-year-old big spenders who partied hard in the 1980s and remembered the smiley playing a role in that.

A pink eye and the tiniest tool in the world

When you take a glance at the Tourbillon Smiley, it might be hard to take the watch seriously. But take a closer look and you will. The skeletonized baseplate is made in micro-blasted Grade 5 titanium with PVD treatment for great rigidity and precise surface flatness. But it’s the little things inside the caliber CRMT7 that are both fun and serious. There is, of course, the smiley figure in yellow gold that’s micro-blasted and painted. There’s also a rainbow under the smiling face. And how about that gold cocktail glass with an umbrella and a tiny 1.7mm olive? But that’s not all. There is also a gold flower and a pink flamingo in red gold that weighs 0.2 grams with an eye made using the smallest beading tool in existence. The Tourbillon Smiley is a tour de force that proves that creating happiness is hard work. 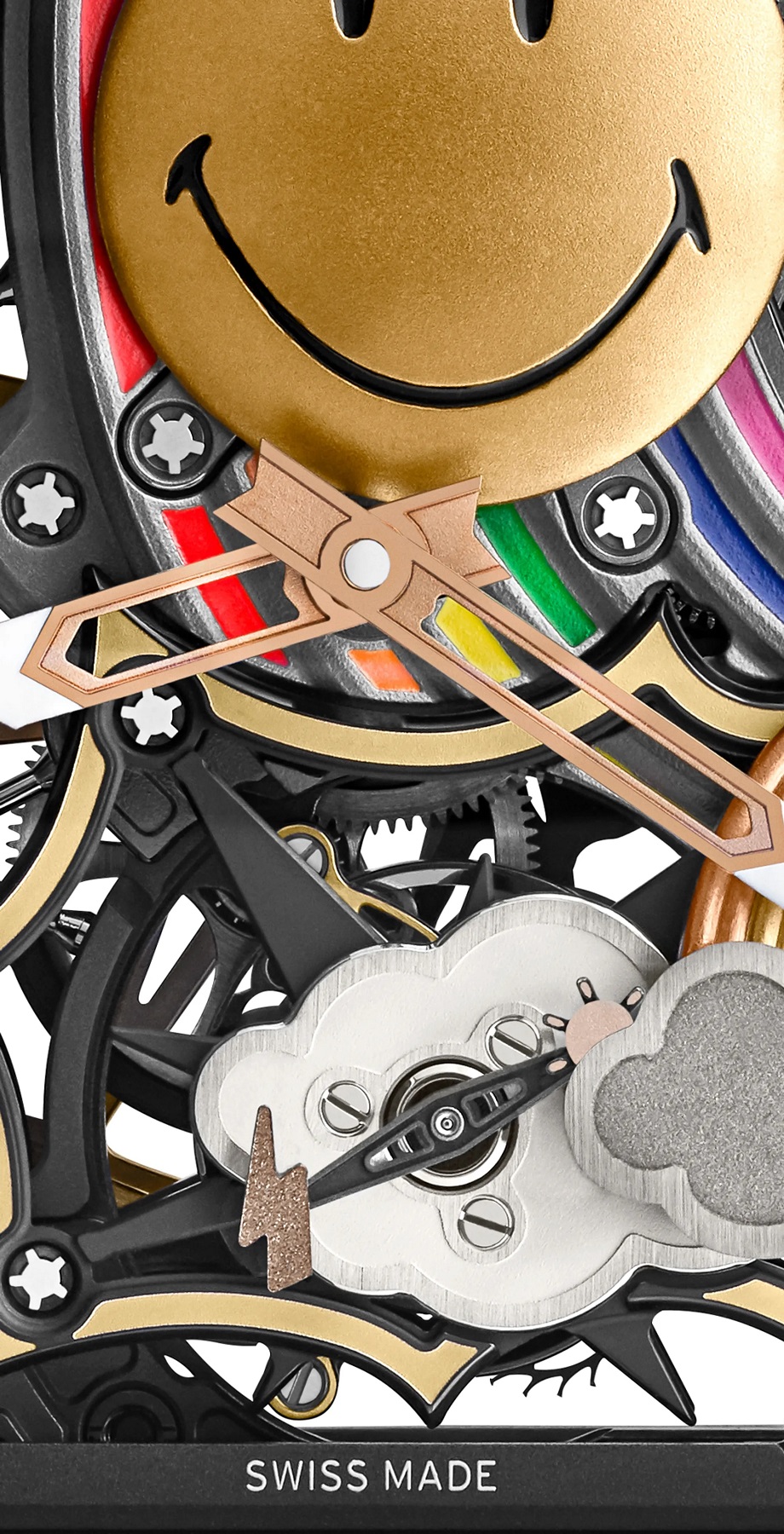 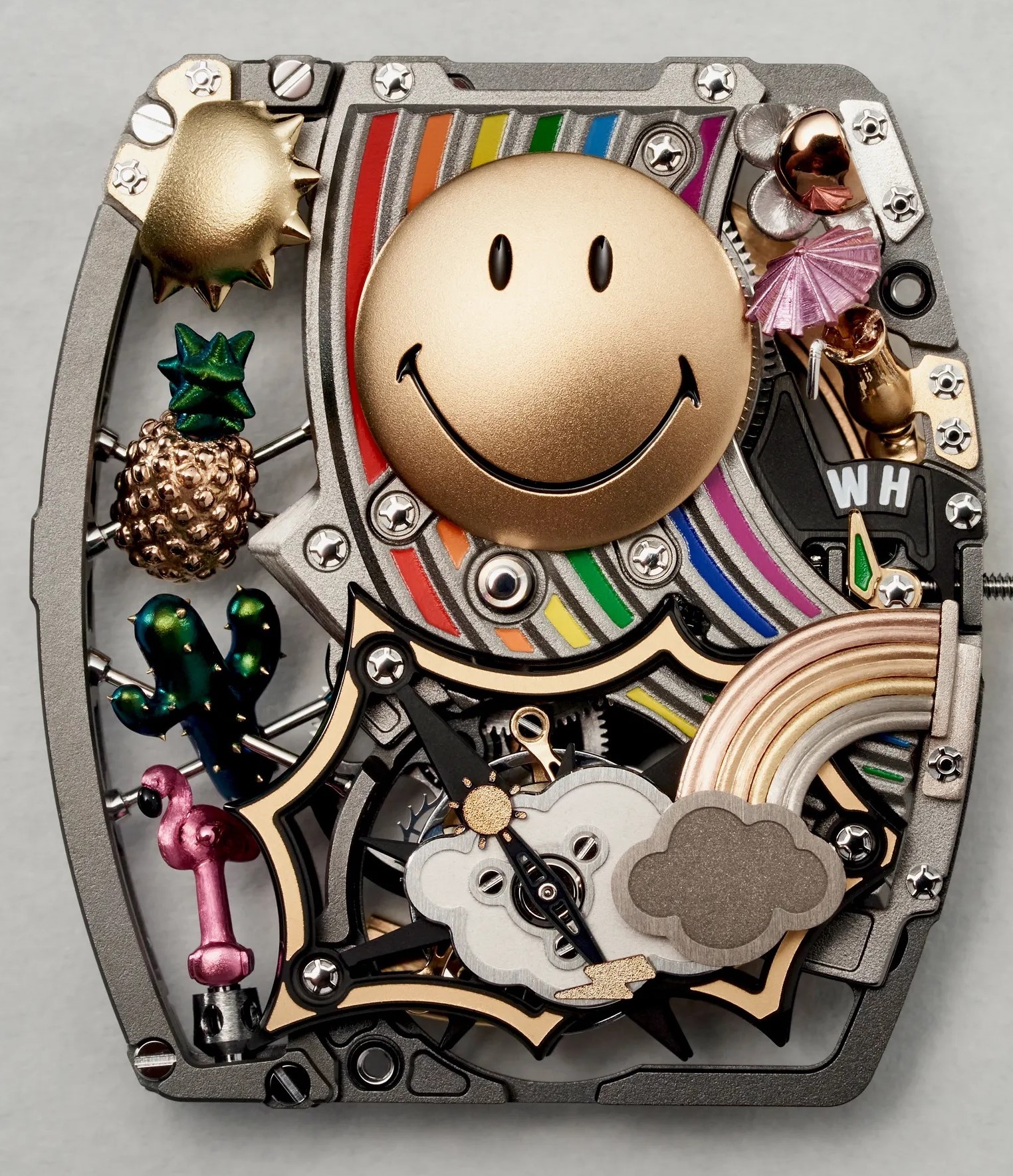 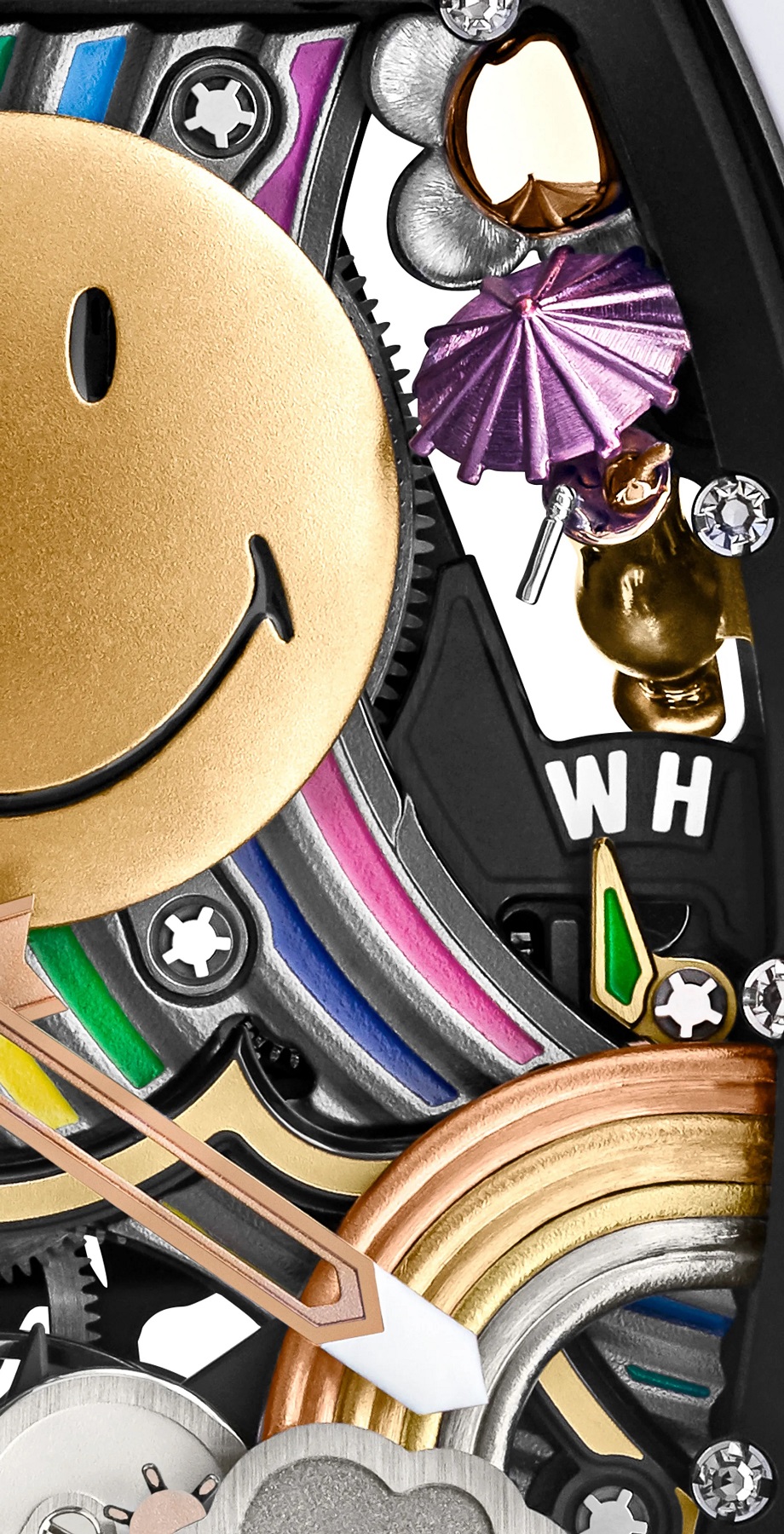 The Richard Mille RM 88 Automatic Tourbillon Smiley will cost you $1,200,000. There will be 50 pieces made, generating a cool 60 million bucks in turnover if Richard Mille doesn’t do discounts for VIP customers. Are you still smiling? I think it’s a price that makes you laugh out loud. But laughing out loud releases endorphins, other natural painkillers, and serotonin to create a happy feeling in the brain. And that is something you can’t get enough of. See? Even if you can’t afford the Tourbillon Smiley, it can still make you happy. Hilariously happy!

Have a fun (watch) week!