When Longines became part of the (today’s) Swatch Group, the brand stopped producing in-house movements. This new Ultra-Chron, however, is proof that Longines does take movements very seriously indeed. With this new release, Longines re-introduces a 5Hz high-beat caliber to its collection.

Admittedly, the production doesn’t take place under the roof of Longines HQ. Instead, it happens on a dedicated floor at ETA (also part of Swatch Group). But Longines was heavily involved in the development of the caliber, and it’s exclusively made by ETA for the Saint-Imier watch brand. A high-beat movement isn’t exactly new to Longines, though. The brand had already produced one back in 1959. At that time, brands had started to develop movements with a higher frequency than the more common 18,000vph and 21,600vph to achieve better accuracy. In later years, brands like Seiko and Zenith also introduced their high-beat movements. Longines had quite a pioneering spirit when it comes to movement development but stopped making its own calibers in the early 1980s. 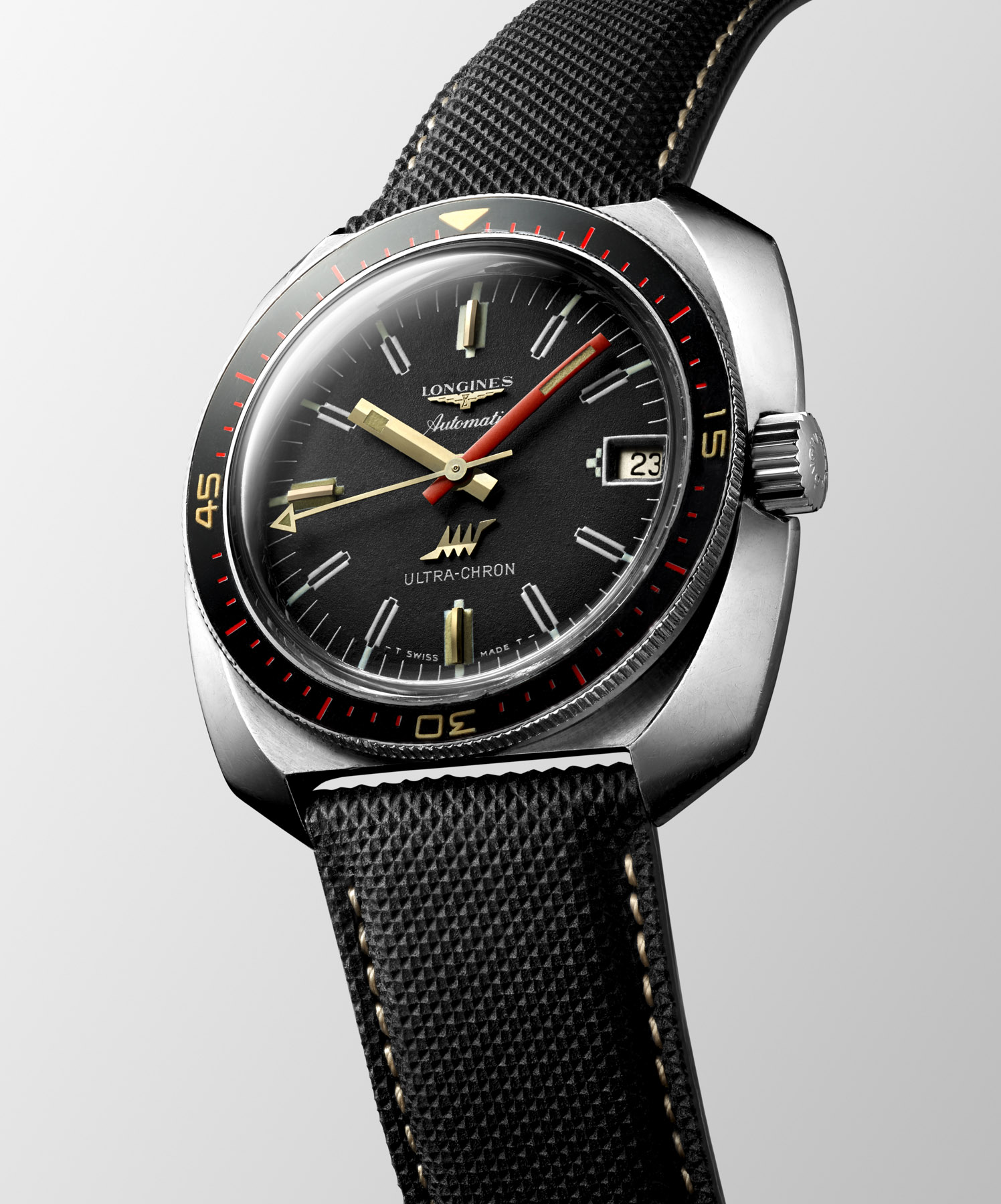 The Longines Ultra-Chron Is Back

The Longines Ultra-Chron we have here is based on the Ultra-Chron Diver from 1968 with caliber 431 and water resistance of 200 meters. Ultra-Chron stands for Ultra Chronometer, and back then, Longines claimed it would keep time with a maximum deviation of one minute per month (two seconds per day). And now, decades later, in a time where Longines supposedly doesn’t have a focus on movements, the brand introduces a re-edition of the Ultra-Chron Diver. 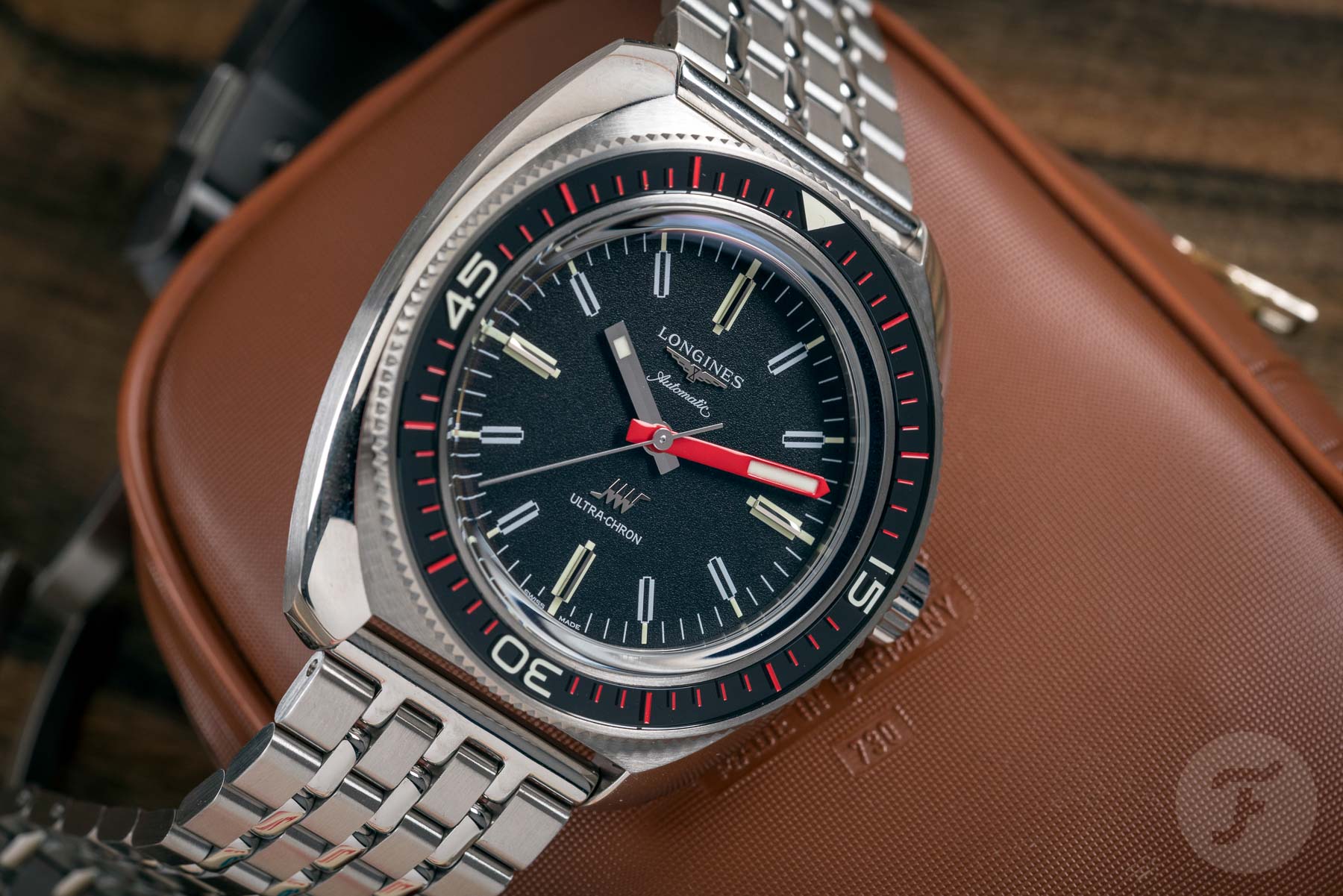 This new Longines Ultra-Chron Diver (reference L2.836.4.52.9) is close to the original with the same high-beat frequency of 36,000vph. The case size increased slightly from 42mm to 43mm, and, of course, Longines used modern materials for the bezel, dial, and movement. 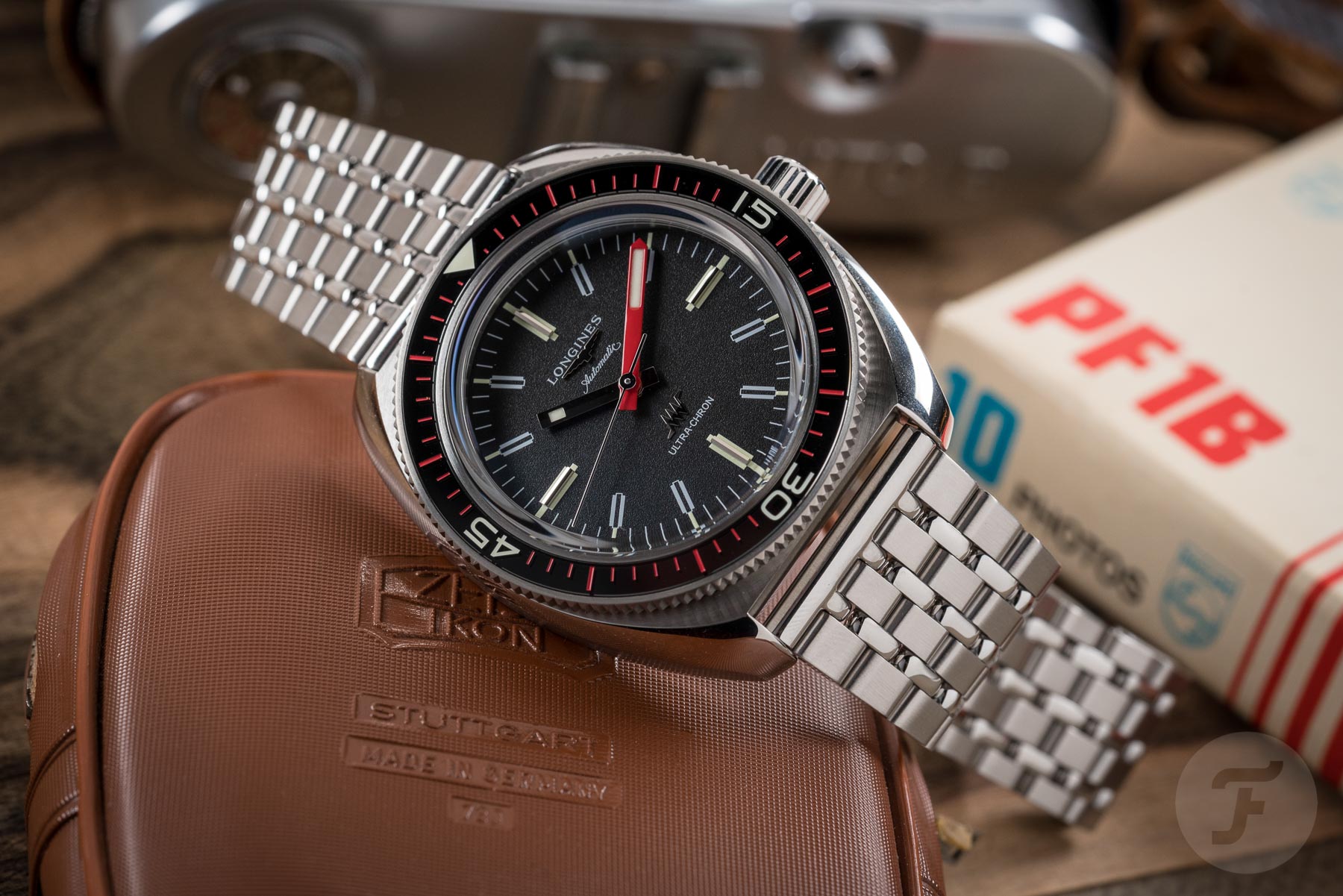 Modern specifications of the Ultra-Chron

The bezel has a sapphire insert with luminescent numerals. The black, grained dial looks incredibly similar to the original version, but now uses Super-LumiNova instead of tritium, of course. You’ll also see that the Ultra-Chron logo is applied to the dial along with the Longines winged hourglass and cardinal hour markers. Inside is the high-beat caliber L836.6, which uses a silicon balance spring. Aside from these upgrades, Longines has also increased the water resistance, bumping it up to 300 meters. 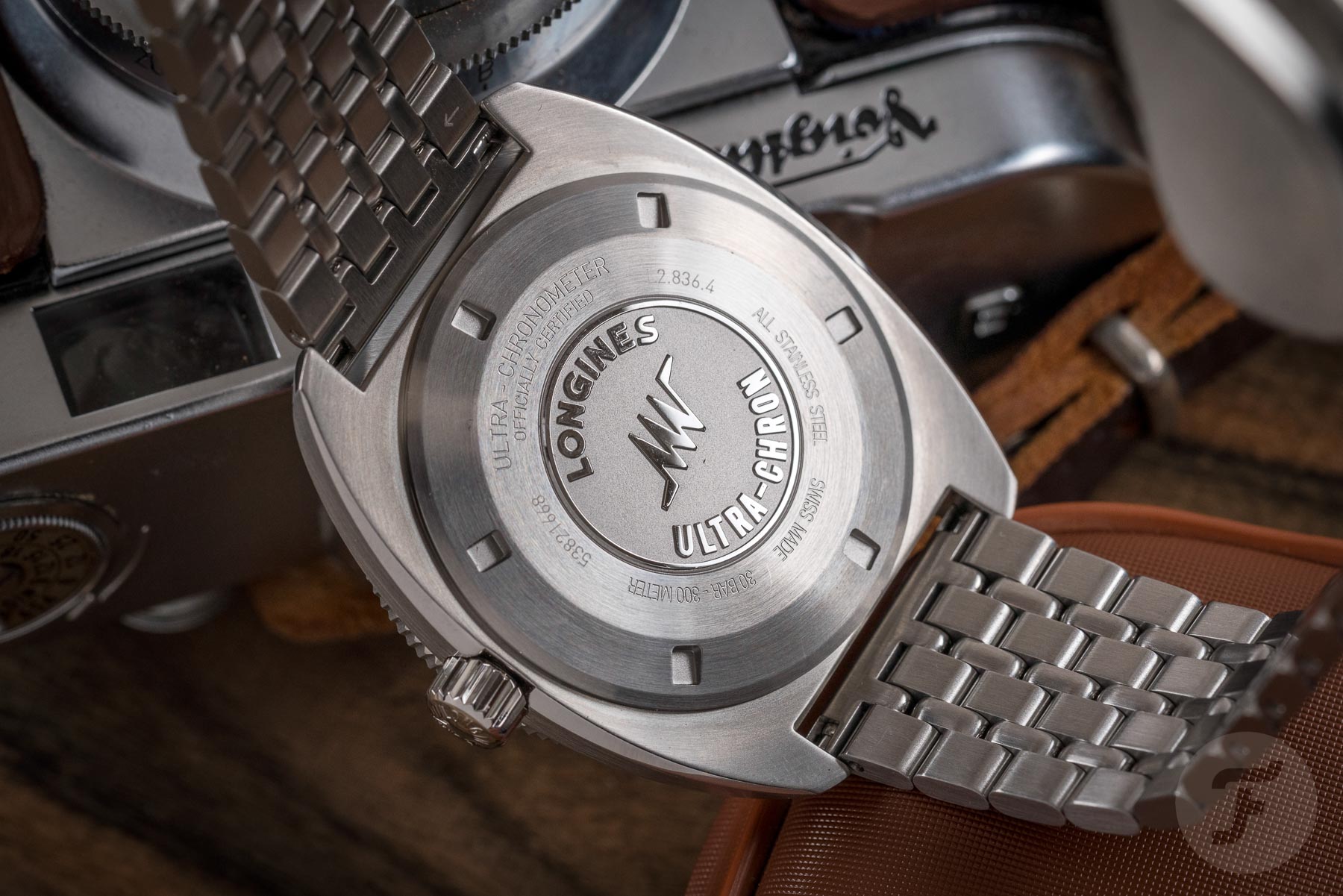 Getting back to the L836.6 movement, it’s certified as an “ultra chronometer” by TIMELAB. Yes, you might have heard that name before, as the independent laboratory in Geneva also does the chronometer certification for other brands. Just like the Master Chronometer certification, the ultra-chronometer certification requires a fully cased watch, not a standalone movement like the regular chronometer standards. TIMELAB tests the entire watch for 15 days at three different temperatures (8°C, 23°C, and 38°C). According to the standard used by TIMELAB (ISO 3159:2009), the mean daily rate is still +6/-4 seconds per day. As I mentioned, however, this is as a finished product. The self-winding Longines caliber L836.6 has a power reserve of 52 hours. On the case back, you will find the “Ultra – Chronometer Officially Certified” engraving. 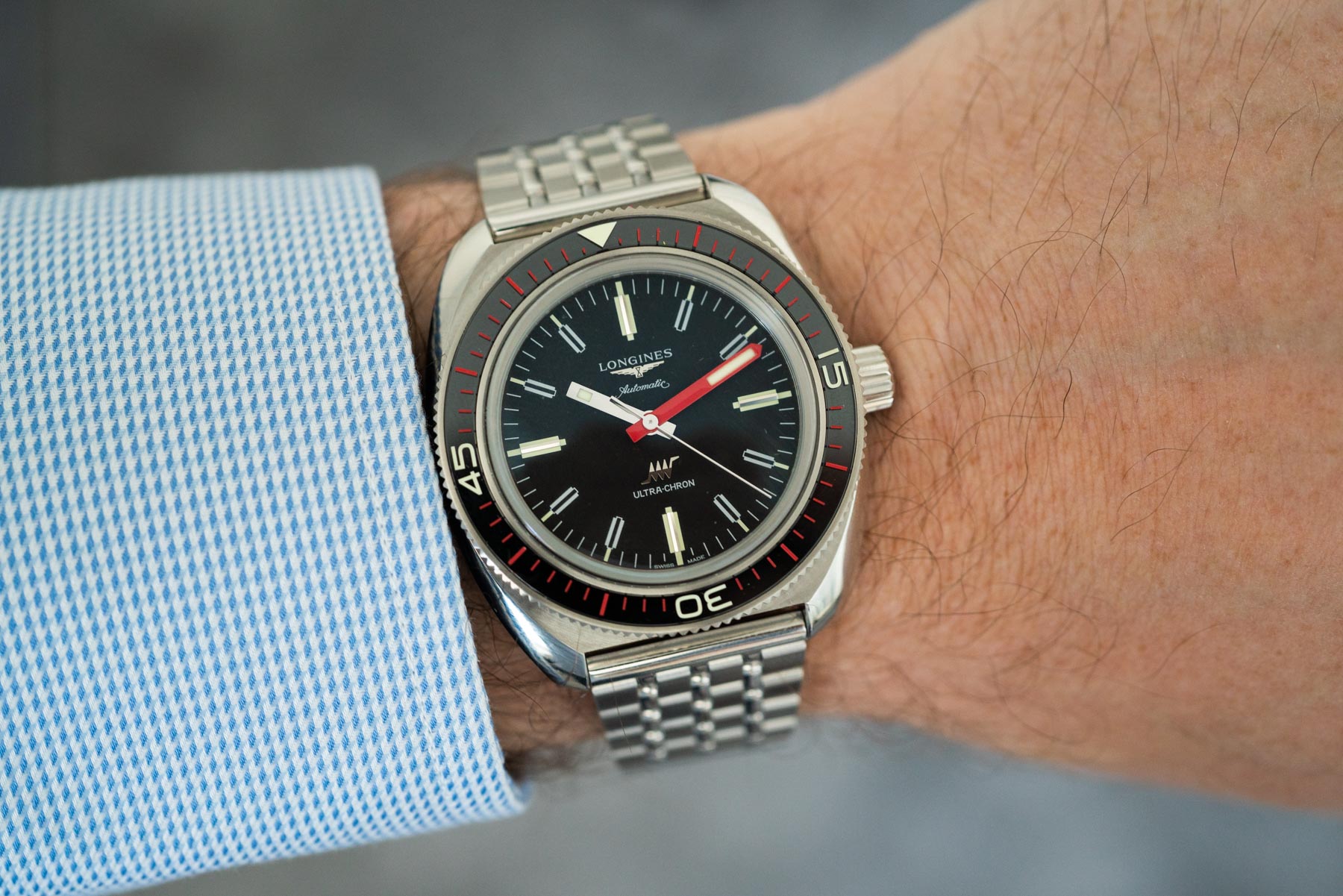 Longines showed us the Ultra-Chron a few months ago at a presentation of the brand’s novelties for 2022. When I laid eyes on it, I was immediately smitten. I’m loving these chunky 1960s designs more than ever, and the large red hand and bezel markings give it some color as well. But for the official introduction today, Longines sent us a working example that we could test drive. This gave me the opportunity to think a bit longer about this Longines Ultra-Chron watch and see if I’m still as enthusiastic as I was upon first seeing it a while ago. 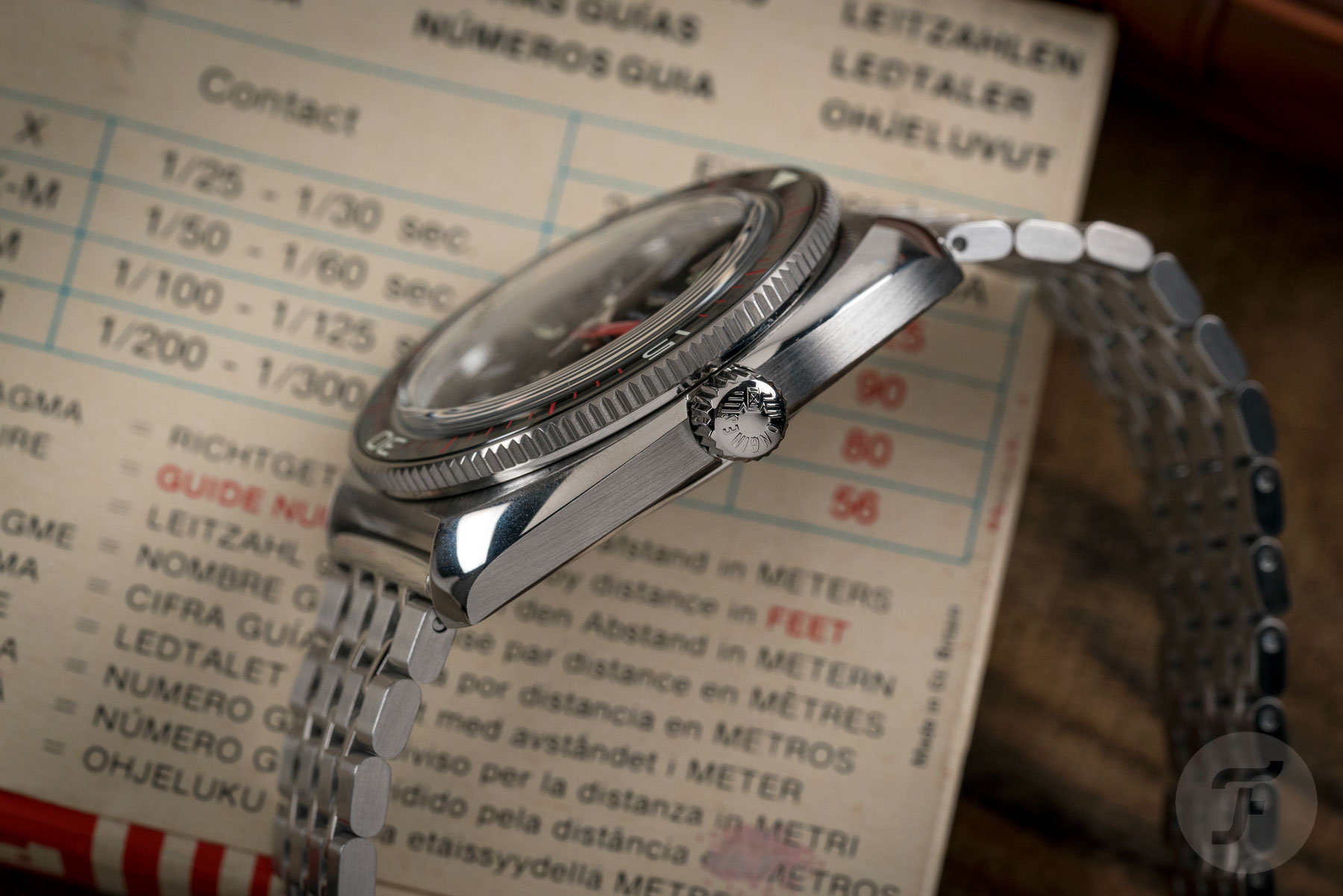 A chunky but wearable watch

Longines applied a combination of satin and polished finishes to the case surfaces. It makes it an easy watch on the eyes, despite the large diameter and chunky looks. The thickness of 13.6mm is very decent for such a large dive watch with a 43mm diameter. The lug-to-lug measures 48mm, so it will also work pretty nicely on most wrists. 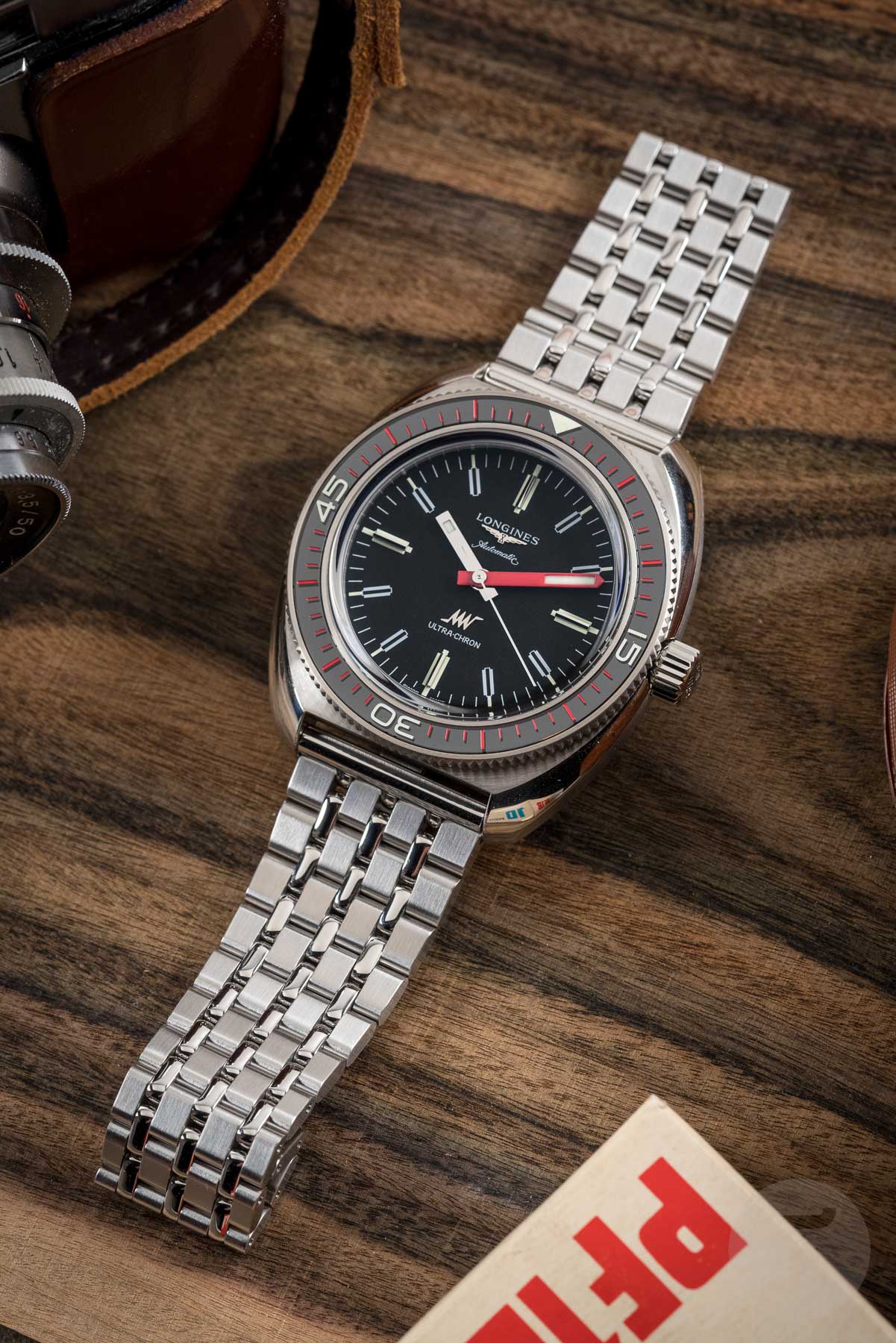 The bracelet is amazingly comfortable

I could argue that an acrylic crystal may have made this watch perfect. Modern customers, however, may prefer the sapphire box-shaped crystal that Longines used. The straight-end bracelet raised some eyebrows here at the Fratello office, but any doubts disappeared with the watch on the wrist. I’m incredibly critical when it comes to bracelets, but I must give kudos to Longines for this amazingly comfortable example. Other than the straight-end pieces, it’s incredibly nicely done, and more importantly, it wears just great. 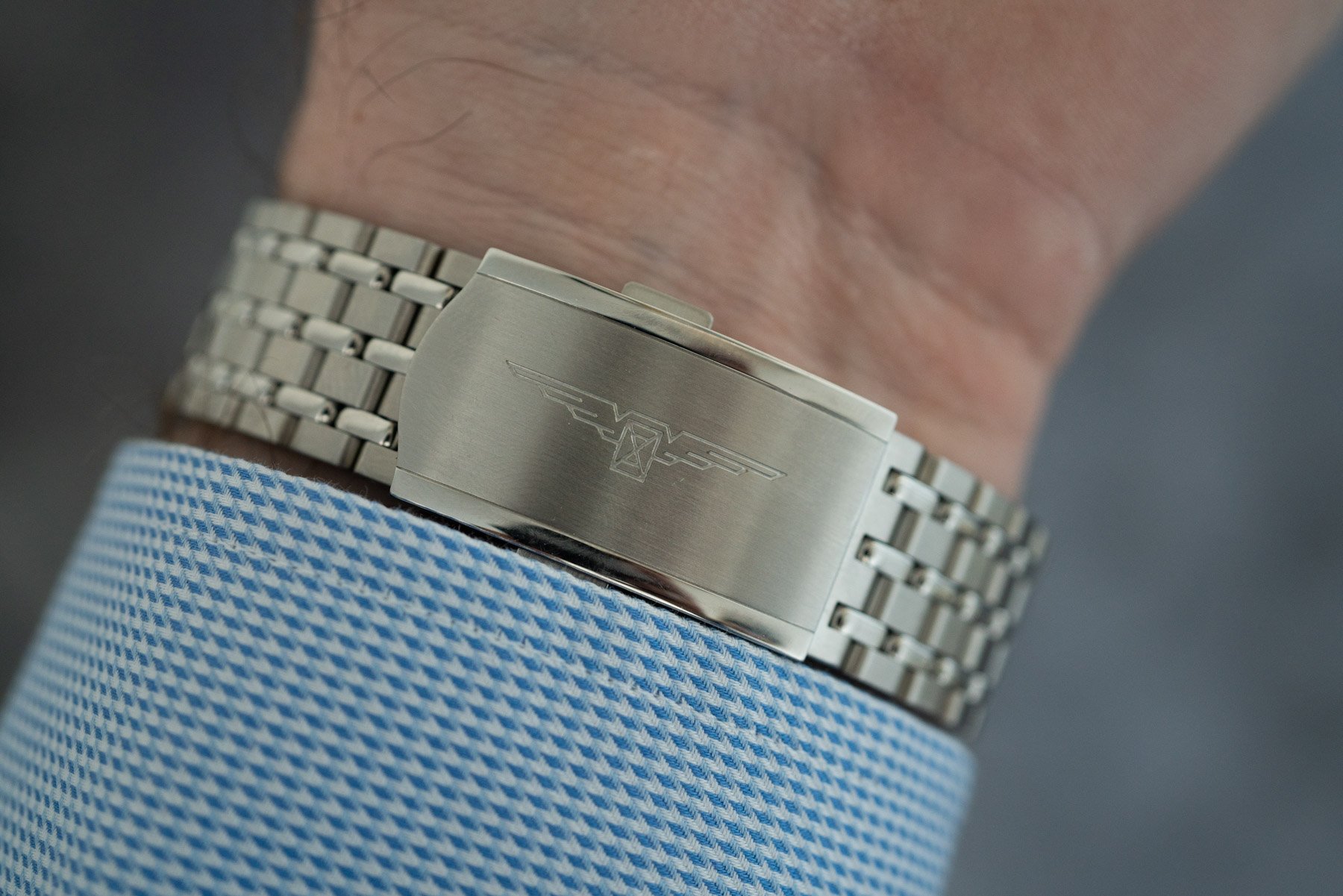 The small links have a polished finish, while the larger links have a satin finish. On the clasp, you’ll find two buttons to open it, as well as an engraved Longines hourglass logo. 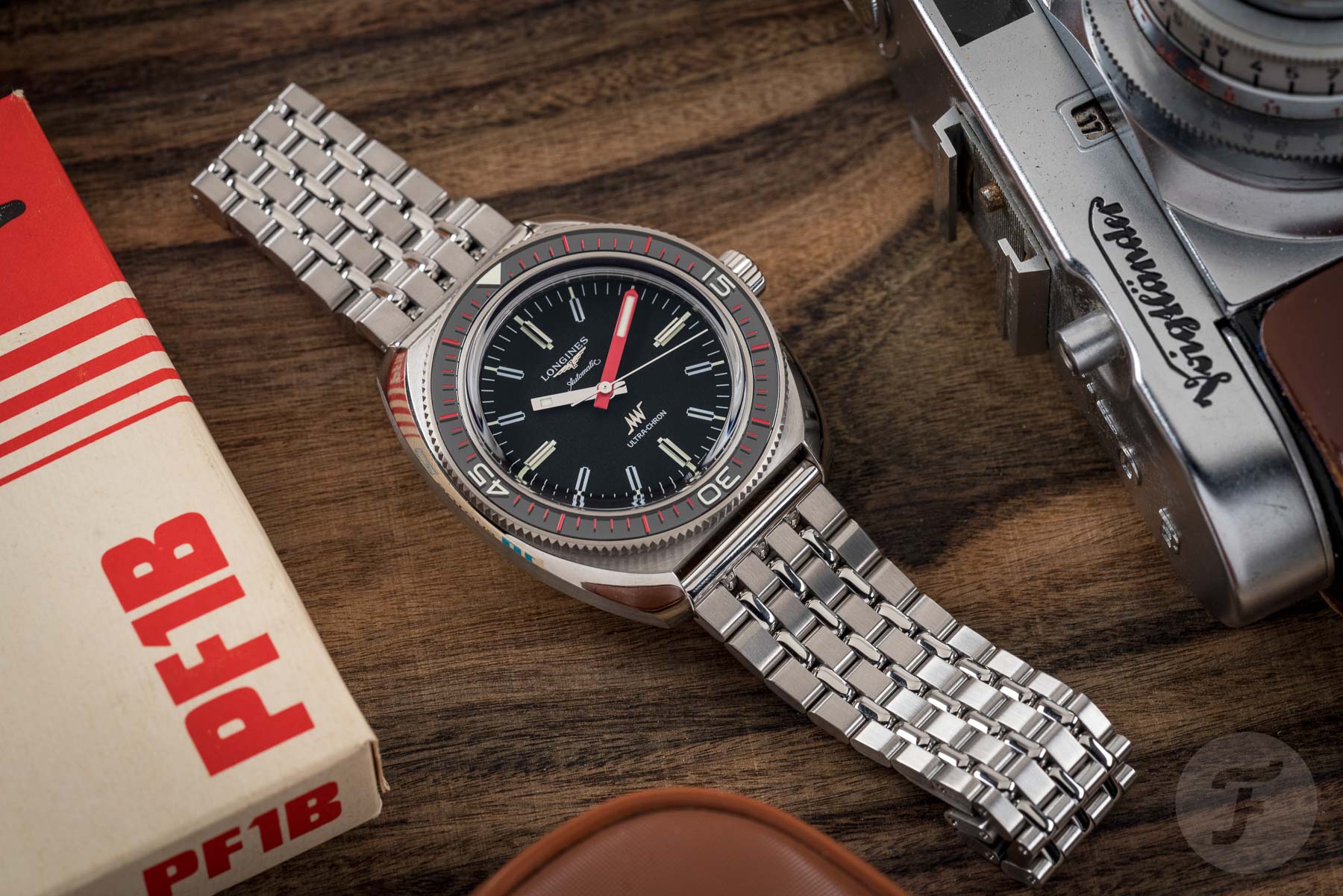 The micro-adjustment is done “old-school toothpick style” with three additional holes in the clasp. There’s no easy-adjustment system, but this will do.  Alternatively, you can also buy the Longines Ultra-Chron on a brown leather strap (reference L2.836.4.52.8). I don’t see a reason not to go for the bracelet version, though. You can fit any 21mm leather strap to the watch by yourself later on. Both references are also available with an additional black NATO strap made of recycled material with a red stripe. You will also find a strap-changing tool in the box. A new direction for Longines?

If these 1960s-style cases are something you like, the Longines Ultra-Chron Diver is definitely an interesting watch to try out. The high-beat movement and ultra-chronometer certification should increase the desirability of this watch as well. The best thing for me is that Longines did not only honor the original Ultra-Chron Diver from 1968 based on aesthetics. Instead, the brand also used the appropriate movement and went the extra mile to have one exclusively developed.

The original Ultra-Chron case has a slightly different profile

We also already saw it happening with the recent Spirit Zulu Time, which had a movement custom-made exclusively for Longines. It really seems that the brand is stepping up its game. Former brand CEO Walter von Känel once told me during an interview that Longines will never produce in-house movement again. But under the leadership of the new (since 2020) CEO Matthias Breschan, Longines is clearly going in a direction where it can claim to have its own movements. 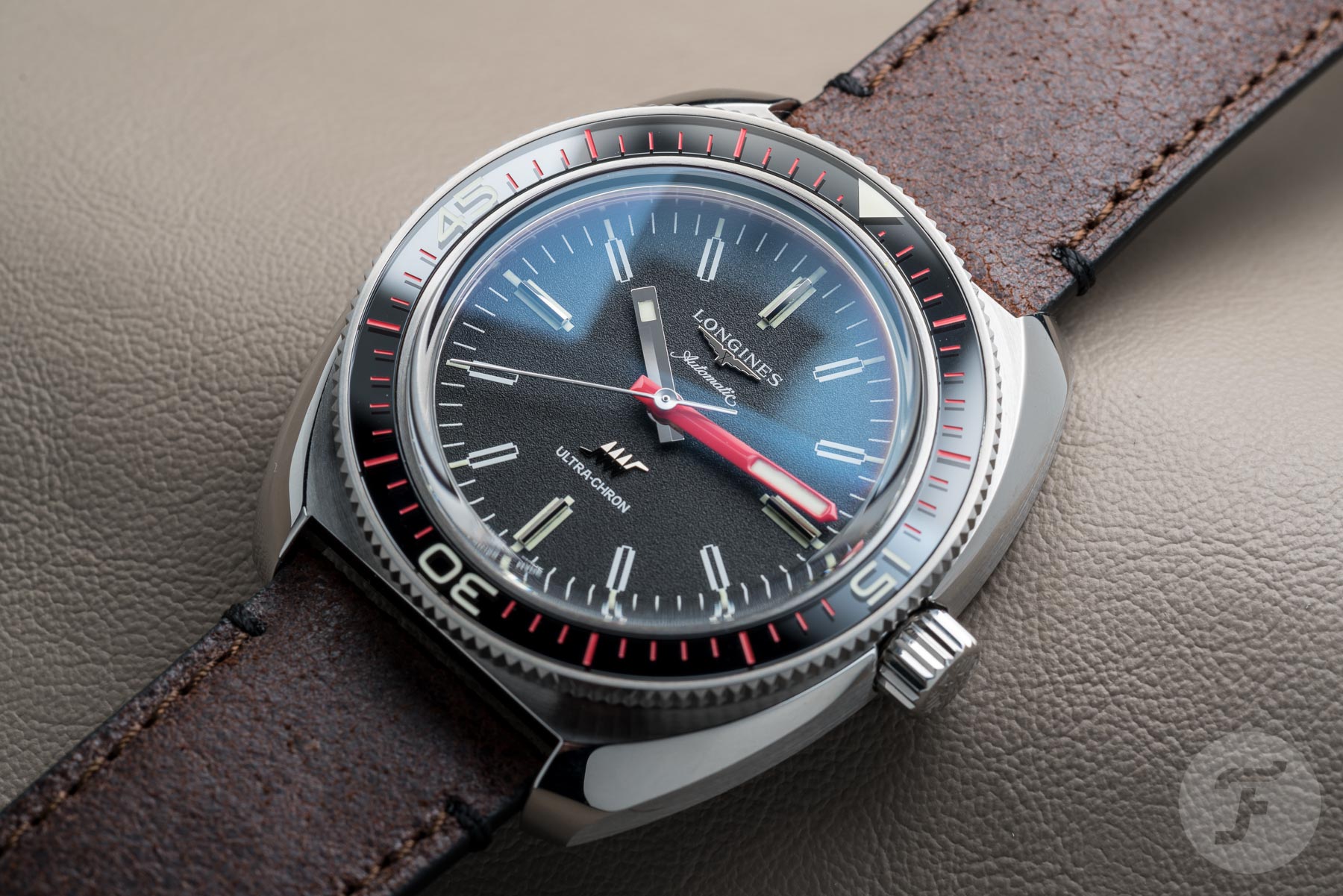 Final thoughts on the Ultra-Chron

There are good reasons why re-editions are so popular. One is that most people who have an interest in mechanical watches do so because of nostalgic reasons, so they are also likely to enjoy designs from the past. The other reason is that they bring historical designs and new innovations together. Even though these differences or upgrades seem very marginal to outsiders, they can make all the difference to watch enthusiasts. With the new high-beat movement with silicon balance spring, ultra-chronometer certification, a five-year warranty, and water resistance of 300 meters (who uses this anyway?), this watch will tick many boxes.

And let’s also not forget about the new, properly executed bracelet. I love a good re-edition, especially when it’s well executed (like the Longines Ultra-Chron), but even more so when it brings something more to the table. It needs to make sense to go for the re-edition rather than source an original vintage model. Alternatively, if you have the original Ultra-Chron Diver, adding this new one could be a good way to preserve your vintage example.

Let us know what you think of it in the comments below, and for more information, visit the Longines website.