Start Your Engines! It’s Time To Race With Louis Moinet

When Louis Moinet introduced the downsized version of its Memoris Spirit Chronograph earlier this year, it was, in my opinion, a masterstroke. Since 2003, the Swiss brand from Saint Blaise in Neuchâtel has made a name for itself by creating exuberant and technically impressive watches. Louis Moinet always presented its watches in 46mm cases, a sizeable chunk of wrist real estate. However, it was nothing short of miraculous when Jean-Marie Schaller’s team squeezed a 311-component movement into a 40.7mm case. Especially when you consider that the decrease in size did not lessen the visual impact. In fact, it amplified it. To coincide with the launch of the new, revamped Memoris Spirit Chronograph, Louis Moinet has also introduced the Time To Race collection.

The Time To Race collection is an offshoot of the new Memoris Spirit, in the form of a series of unique pieces designed to embody and celebrate motorsports. Now, when you hear me describe the collection as “unique pieces,” you may switch off, but there’s more to things than what may initially meet the eye. In fact, technically, a better description may be a collection limited editions, but thanks to clever personalization, every one of the 99 pieces in each of the three colors is unique. 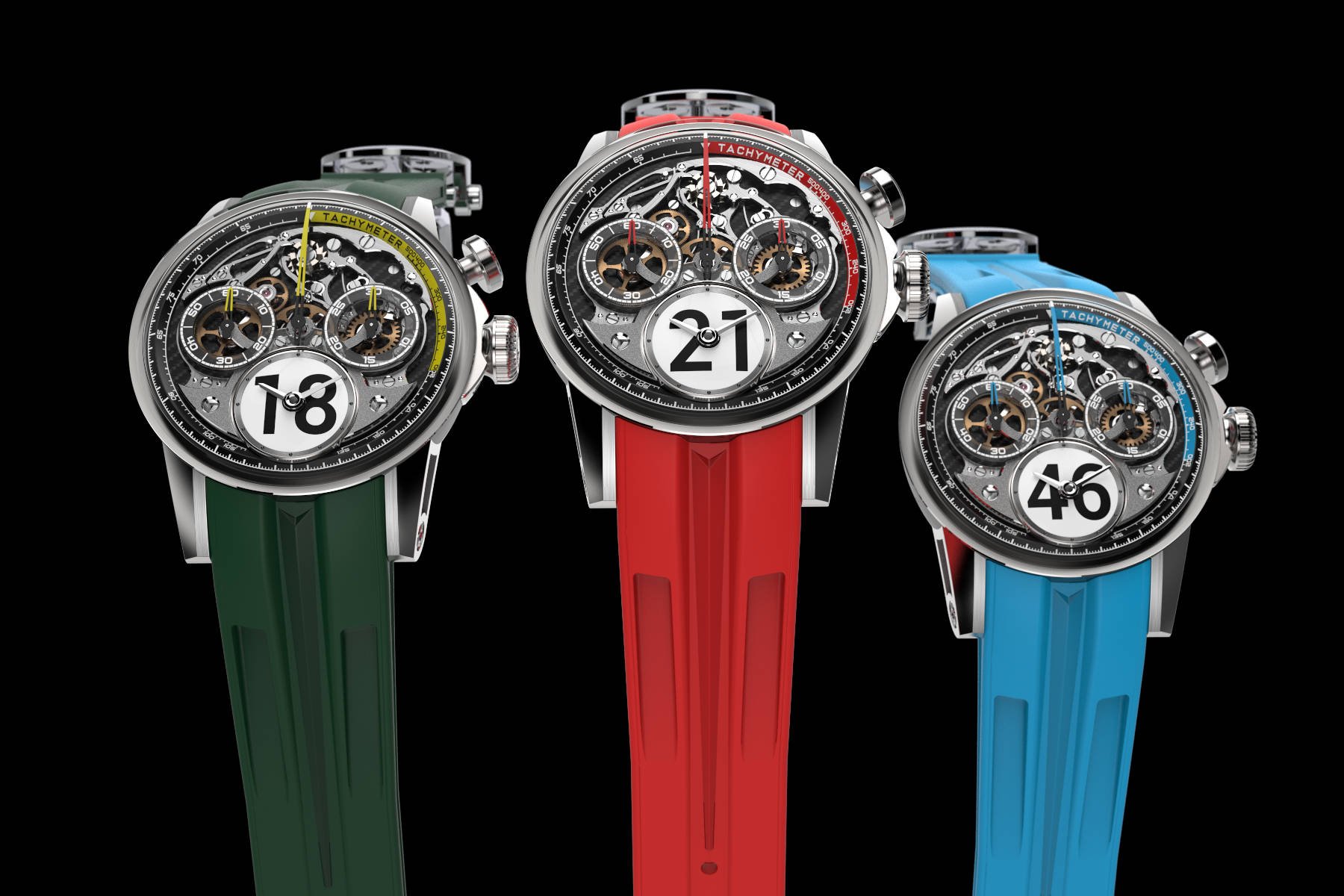 Limited or unique? Which is it?

Are you sitting there now even more confused? Allow me to elaborate. The Louis Moinet Time To Race collection comes in three different colors. You can choose from red, blue, or green to form the basis of the watch’s livery accents — French Blue, Rosso Corsa, and Racing Green, respectively. All three colorways feature a black carbon fiber weave pattern behind the dial-side open-worked chronograph mechanism. The chosen accent colors appear on the black chapter ring and the colored rubber strap.

So, for example, I would likely choose the blue model. Why? Well, as a long-suffering fan of Tottenham Hotspur, the blue stands out to me thanks to Tottenham’s white and blue colors. Granted, it’s not navy blue, but it’s as good a reason as any to pick a color, right? Interestingly, Jean-Marie Schaller is a fan of Arsenal, Tottenham’s arch-rivals. You bet we’ve had some fantastic football banter over the past few months, but he went quiet towards the end of the season. I can’t think why, though? Anyway, where was I? Ah yes, the blue model! You’ll notice that the first 15 seconds of the tachymeter on the chapter ring are highlighted in blue, as is the central chronograph seconds hand. The sub-dials also feature blue hands. Finally, a blue rubber strap completes the watch. It’s not too much blue, but rather, just the right amount. 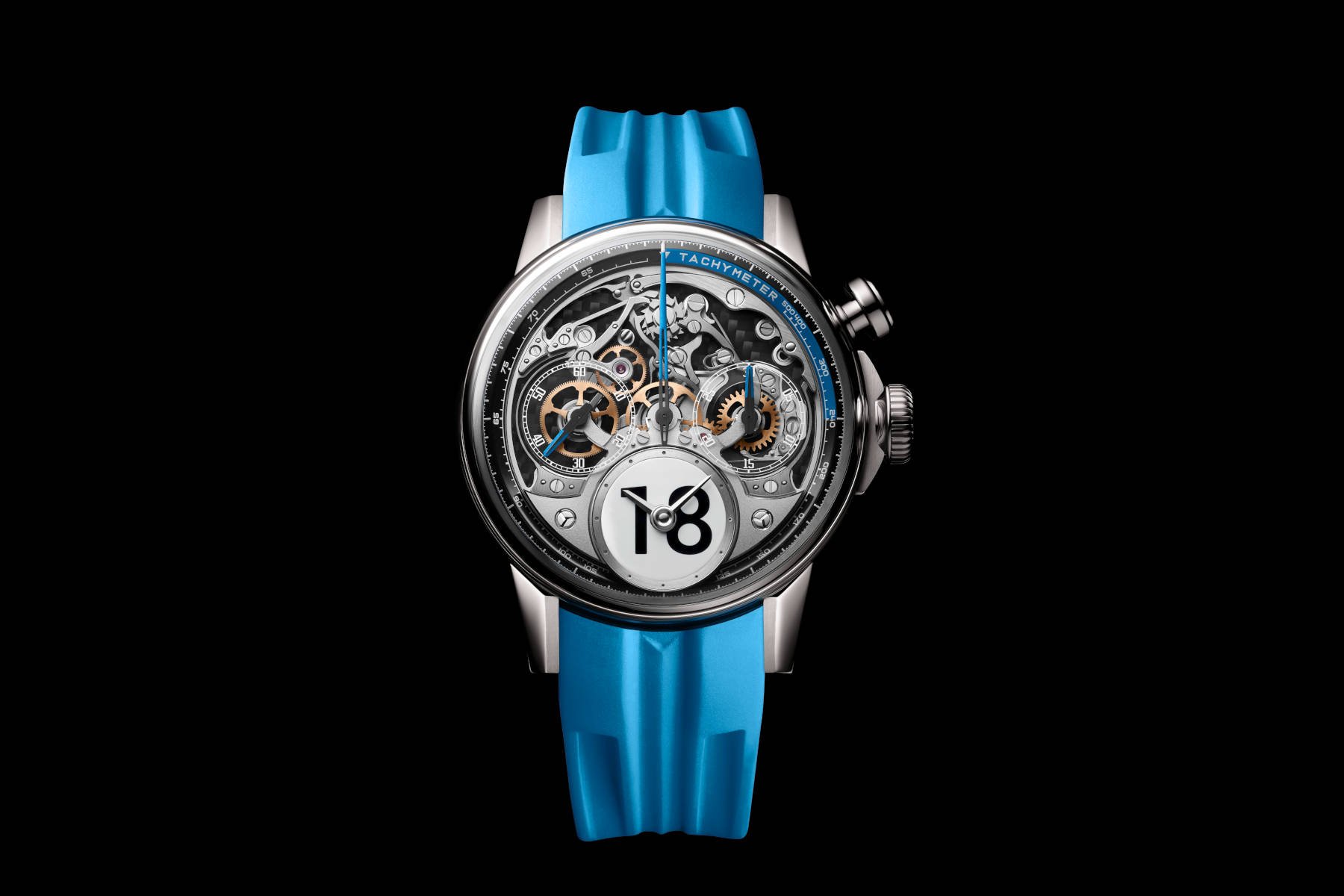 Time to choose your color…

The red version features red accents on the chapter ring, red hands, and a red strap. The green version is a slight anomaly in as much as it’s more of a combination of green and yellow. Louis Moinet chose yellow for the chapter ring. I assume this is because the yellow offers greater contrast against the black, as the British racing green is rather dark by comparison. The central seconds hand is also yellow, and so are the hands of the chronograph registers. Really, the only green is the rubber strap, but it’s the most prominent color.

OK, so that’s the colors out of the way; let’s talk about the large numbered sub-dial for the time. That’s where Louis Moinent essentially makes the watches into unique pieces and offers customers a level of personalization. Each one- or two-digit number will only be used once per color scheme. So, I have already picked the blue model, right? Then, say I chose the number 44, which was my go-to jersey number for when I used to play ice hockey; I would then have the only French Blue 44. No two watches will be alike. If someone else wanted number 44, they would have to go with the red or green model. 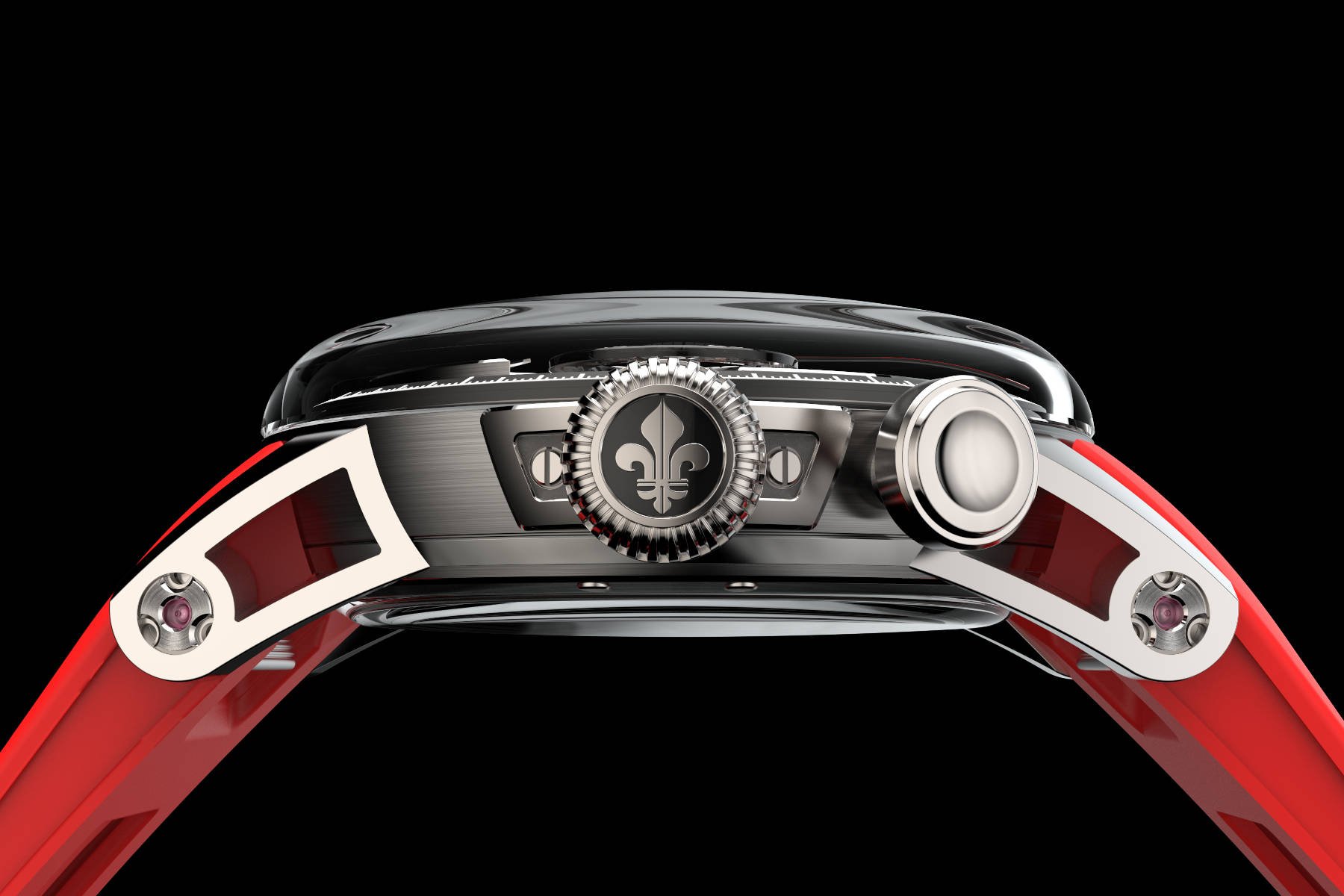 The Time To race case is a feat of micro-engineering!

We must afford a moment of consideration and appreciation to the engineers of the new Grade 5 titanium case. Downsizing from a 46mm case to just 40.7mm is no mean feat. Not only that, but the integration of the beautiful box sapphire crystal allows for panoramic views of the stunning movement within. 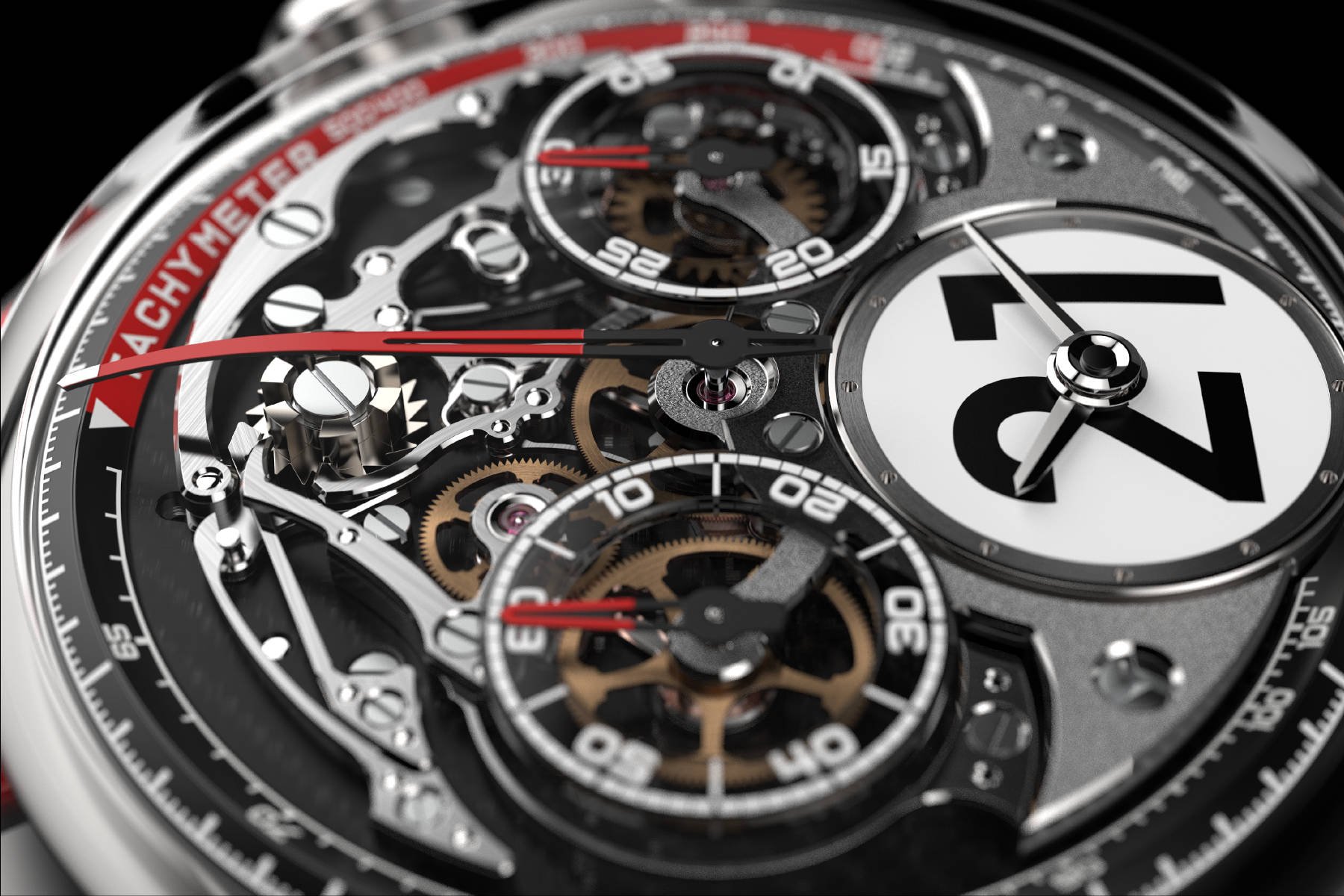 That movement though… Wow!

Despite the fun colors and personalization on offer with the Time To Race collection, it’s the gorgeous automatic movement that steals the show. This is Calibre LM96, a monopusher column-wheel chronograph composed of 311 individual components. There are 147 components for the upper part dedicated to the chronograph and 164 components for the lower part corresponding to the self-winding movement. Alongside a frequency of 28,800vph and a power reserve of 48 hours, the movement delivers all the classic Swiss decorations we’d expect from a Louis Moinet movement. It’s a real smorgasbord of horological decoration, with Clous de Paris hobnail patterns, Fleur de Lis engraving, circular satin-finished gear trains, and diamond-polished sinks. 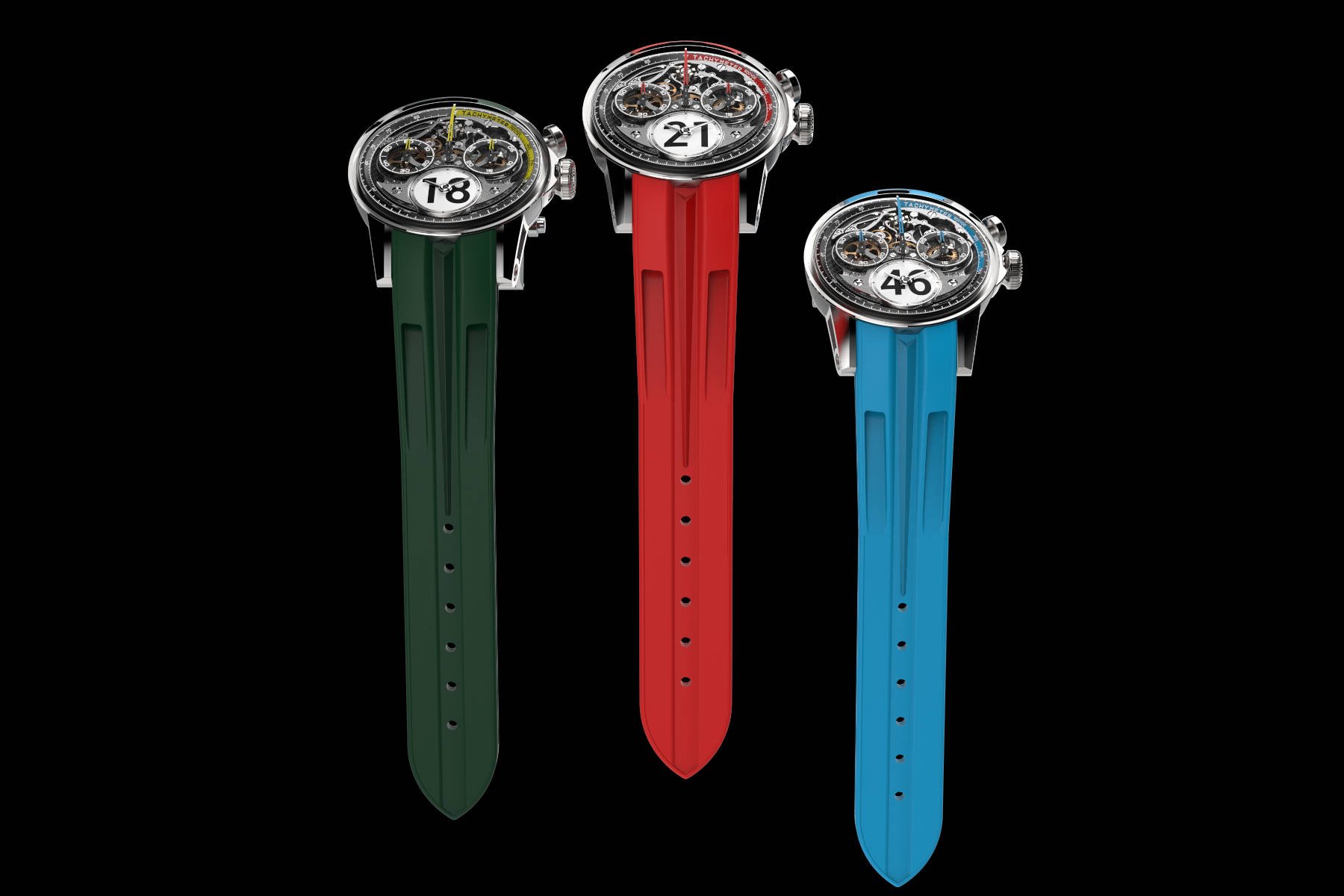 I appreciate that the large, numbered sub-dial may not be to everyone’s taste, but in my opinion, it’s quite a cool concept. I’m keen to know which color/number combination you’d go for. Do you have a story behind your choice of number? Let me know in the comments!

Louis Moinet doesn’t explicitly state if it will make all 99 pieces of every color, but if you’re keen to make one of the Time To Race watches your own, you should get in touch with Louis Moinet directly to find out more and see which numbers are still available. To do so, visit the Louis Moinet website for the Rosso Corsa (red), Bleu De France (blue), and Green Racing (green).